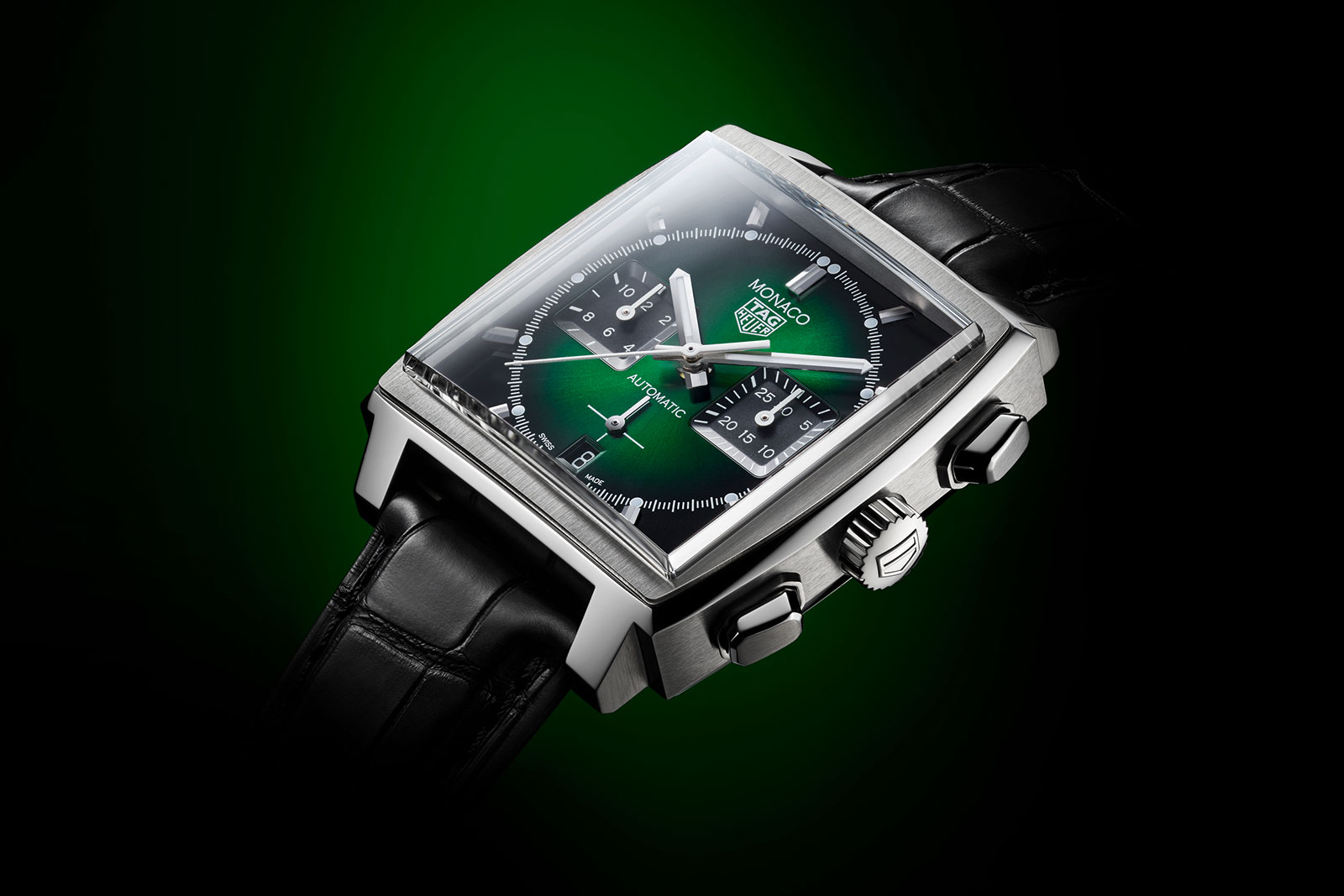 As the official timekeeper of the event, TAG Heuer is marking this year’s race with the Monaco Green Dial. A facelifted variant of its iconic square chronograph, the new Monaco features a gradient-green dial that’s a first for the Monaco, but an exceptionally common colour this year. 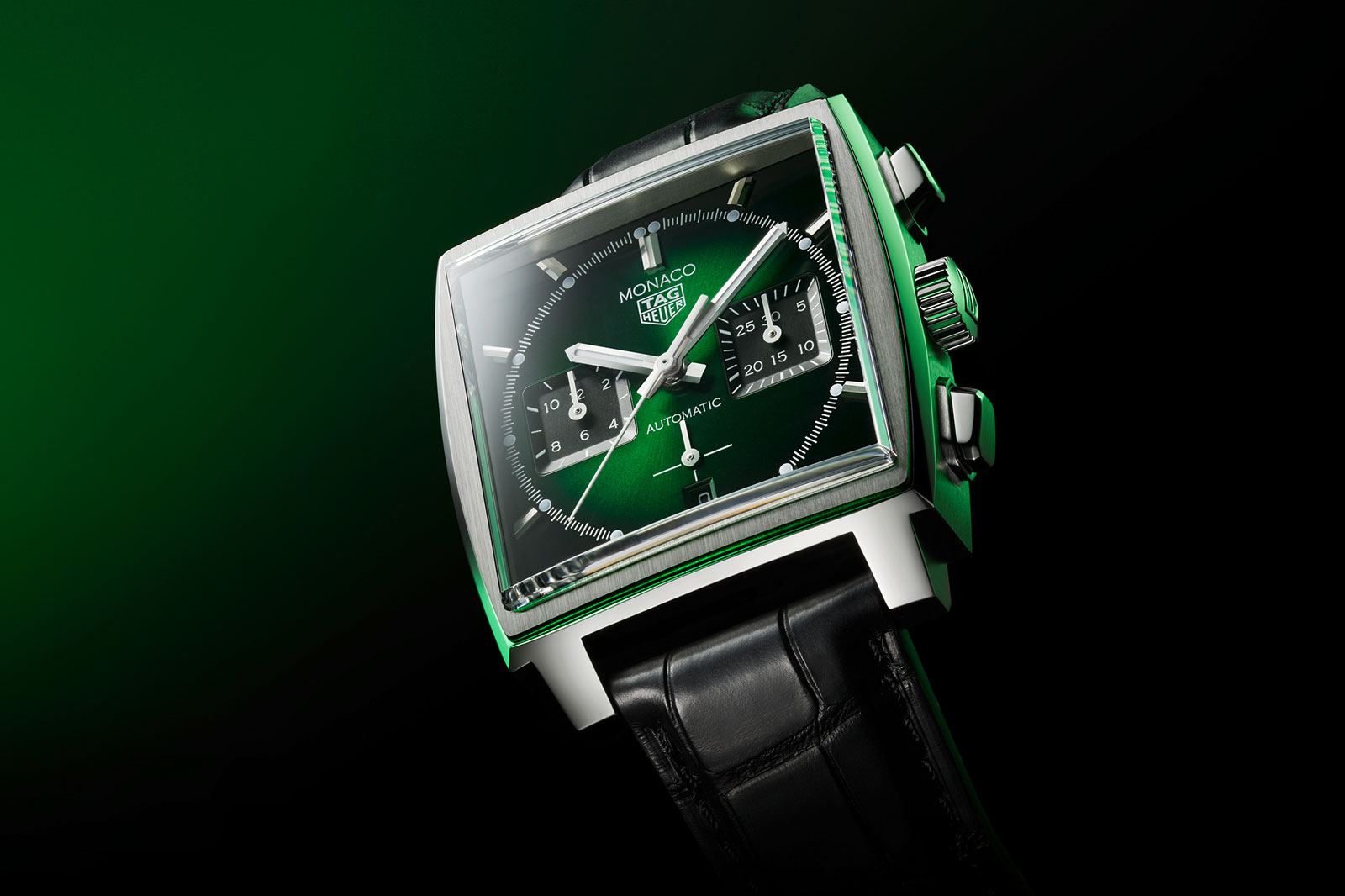 Arguably the iconic Heuer chronograph by virtue of its unmistakeable 1970s style, the Monaco was introduced in 1969 in honour of the Monaco Grand Prix. An unusual combination of a water-resistant, automatic chronograph with a square case, the Monaco remains the brand’s most recognisable timepiece.

While the choice of a green dial may feel modish – dials in this shade seem endless this year even though it’s only April – it is nevertheless well executed. The smoked, metallic finish lends the watch a more nuanced look that separates it from most watches with a green dial. It might not be novel, but I’ve seen the new Monaco in the metal and it is one of the more attractive green dials that I’ve seen to date. 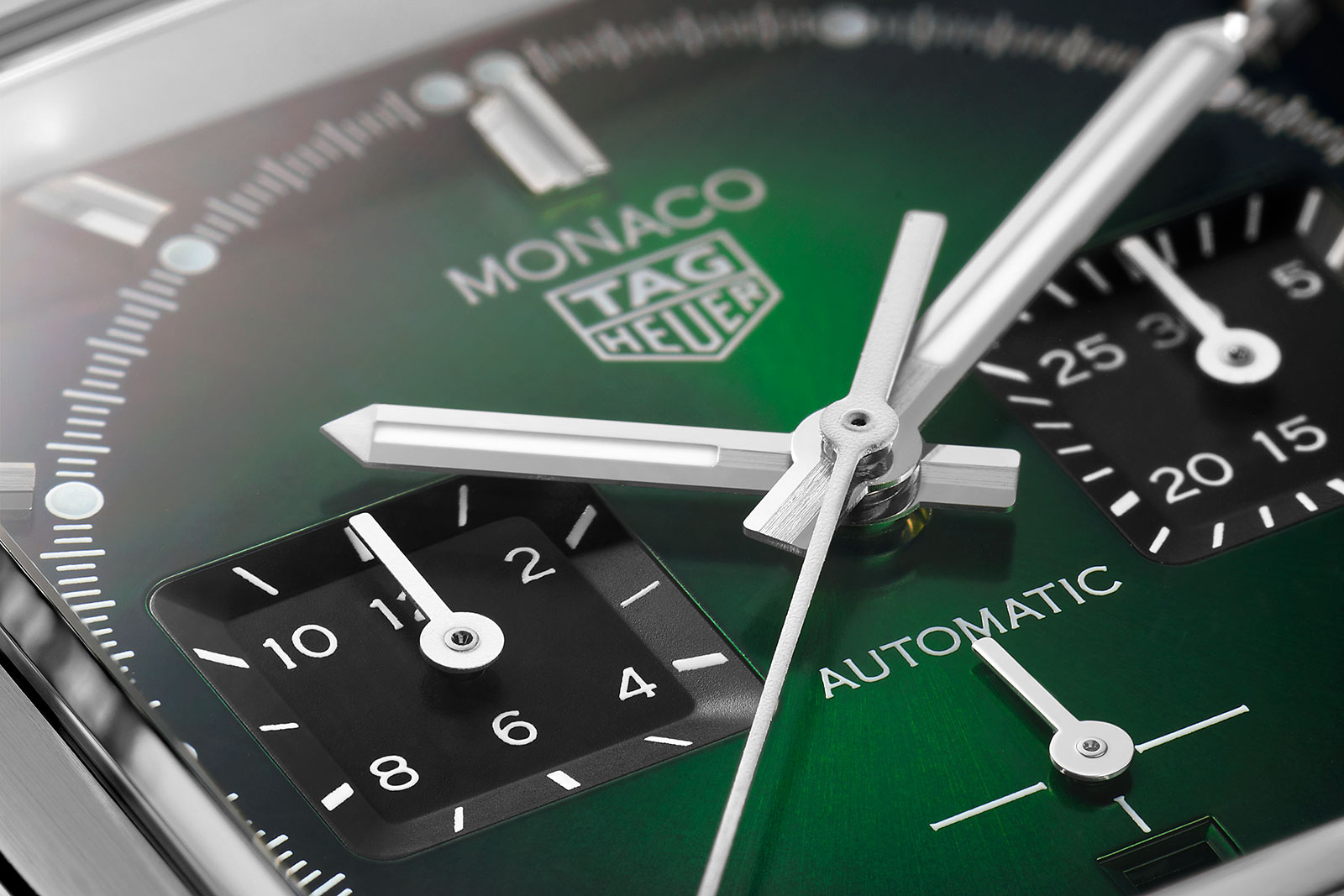 While the remake of the original Monaco ref. 1133 “Steve McQueen” would be my pick from the Monaco lineup – I appreciate its historically-faithful design – the new Monaco in green is a great option for someone seeking a more contemporary watch that still possesses a degree of history.

At the same time, new Monaco does have the advantage of an in-house movement, while the Monaco remakes with a left-hand crown are all powered by ETA or Sellita calibres.

At US$6,650, it is actually less expensive  than last year’s Grand Prix de Monaco Historique edition, and just US$300 over the standard Monaco models (with either an in-house or outsourced movement), making it a decent value proposition.

Radially brushed and metallic, the green dial is smoked, with a pale green centre that darkens towards the edges, while black sub-dials provide a sharp but subtle contrast. TAG Heuer says the colour “is reminiscent of the famous covered portion of the Monaco Grand Prix track”, making it to thematically congruent with the racing inspiration, though it does sound like a bit of a stretch. 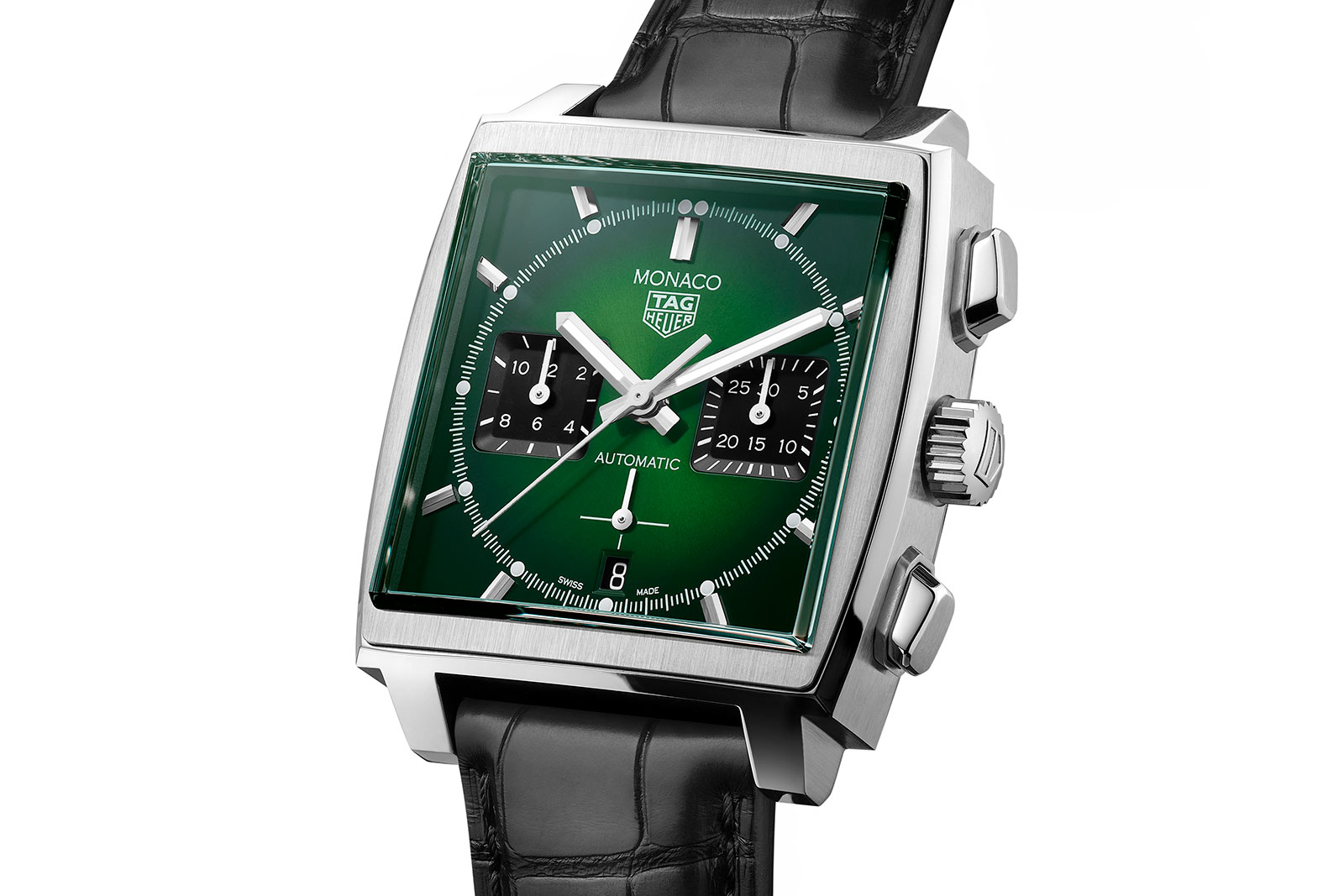 The remainder of the watch remains identical to the standard Monaco, with a bold square case measuring 39 mm that’s fitted with a domed and bevelled sapphire crystal.

The watch is powered by the in-house cal. Heuer 02, which is equipped with a column wheel and a vertical clutch as well as a handy 80-hour power reserve.

Unlike last year’s edition, the new Monaco has a clear case back that does away with the Grand Prix de Monaco Historique logo, allowing the movement to be viewed in its entirety. The reference to the event is more subtle this time around, with the column wheel and lettering on the rotor rendered in green. 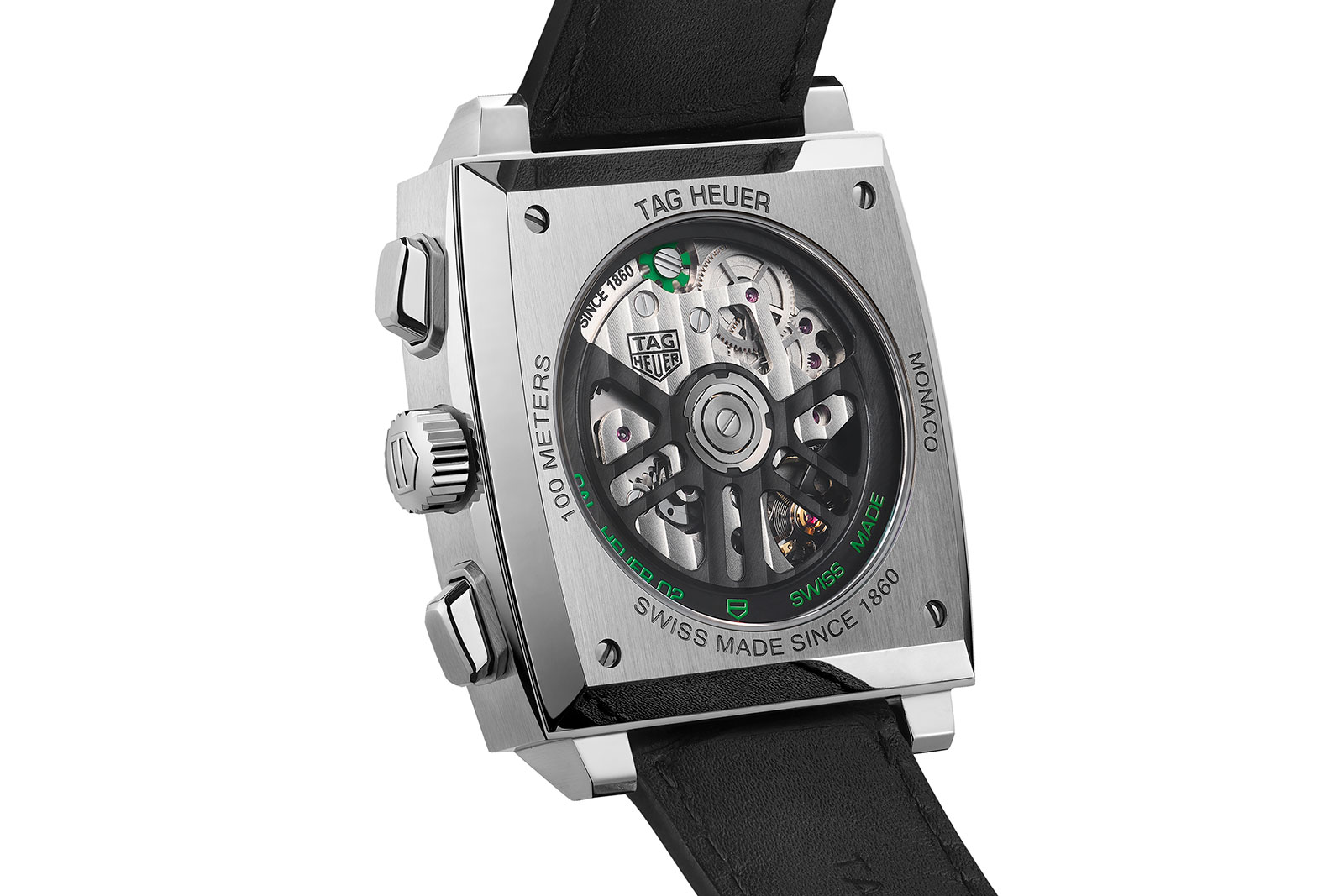