A homage to famed Monaco “Dark Lord”, the TAG Heuer Only Watch Carbon Monaco is unique for utilising carbon, or more specifically carbon composites, in almost every aspect of the watch – dial, case, and even the hairspring is carbon. Plus it has a specially finished movement that’s visible through the an extra-wide sapphire case back.

The vintage “Dark Lord” is all-black version of the Monaco that’s one of the most desirable of vintage Heuers. It was something of an experimental creation with only a few dozen were made, or perhaps even a hundred depending on the source.

One of the first all-black watches, the “Dark Lord” had a powder-coated case like many early black-coated watches. Consequently, the “Dark Lord” case was fragile and few have survived in pristine condition, explaining its rarity and value, as well as why it’s the inspiration for the Carbon Monaco. The pleasing black, orange, and cream palette of the Carbon Monaco instantly evoke the “Dark Lord”. And at a distance, the Carbon Monaco even has something of a vintage flavour. But up close it is evidently a modern watch in both style and substance. 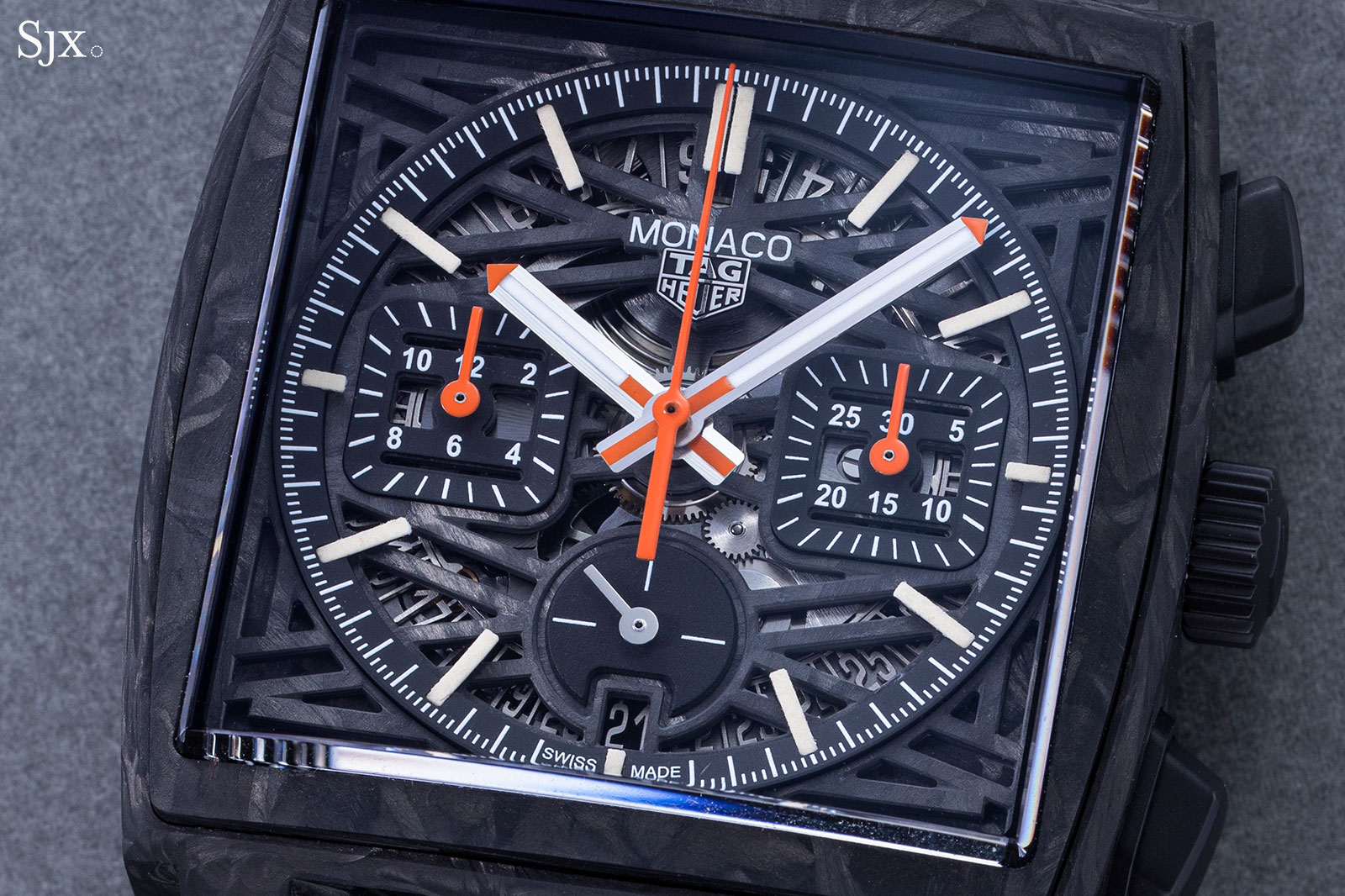 Unlike the “Dark Lord”, the Carbon Monaco is fabricated from a material that’s naturally black, or at least a dark grey. The carbon composite case has an indelible finish, while also being extremely lightweight.

The modern material, along with the geometrically open-worked dial, gives the watch an original character despite the vintage-inspired aesthetic. 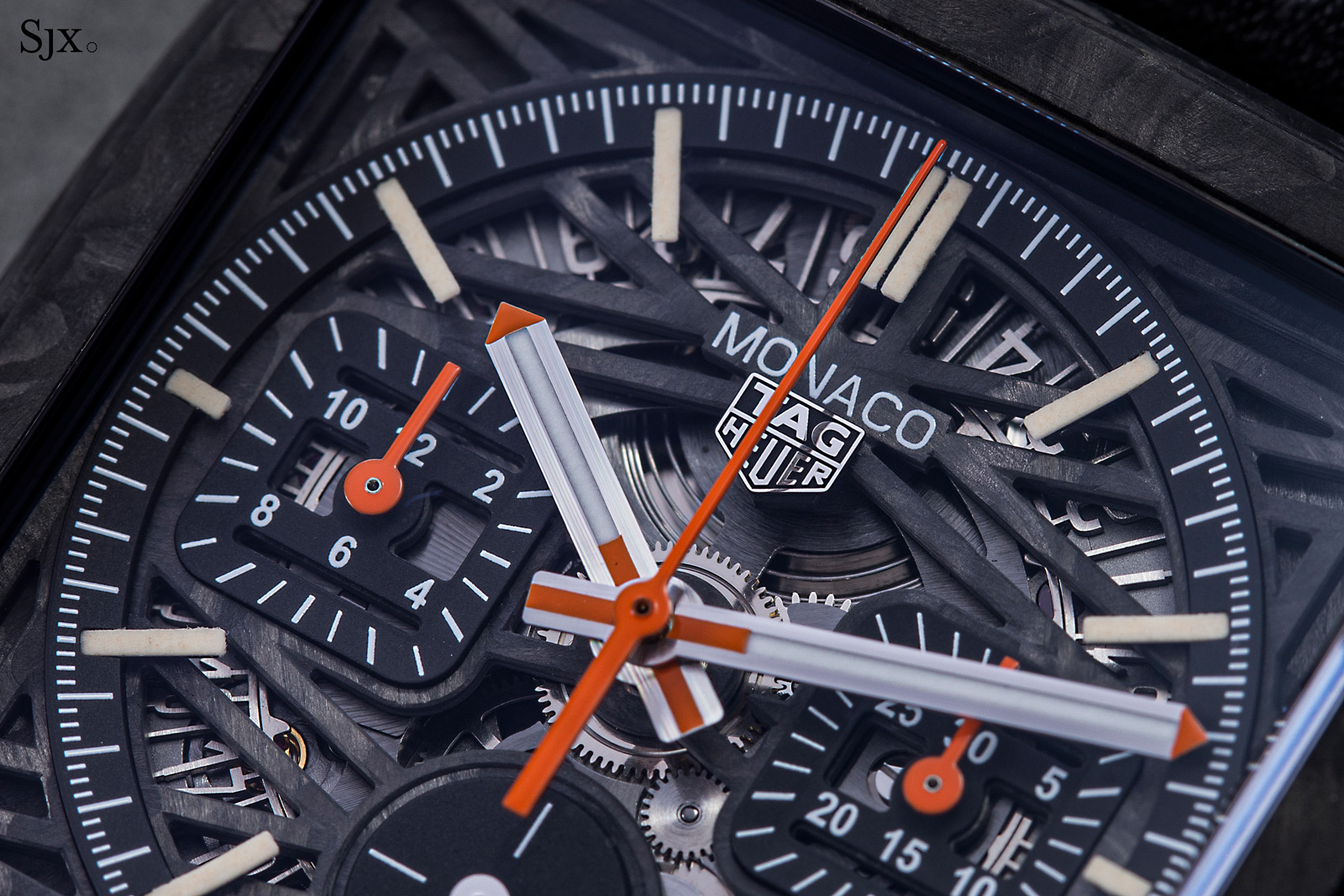 But the Monaco Carbon is more than just a good mix of materials and colours. The in-house movement inside has a special “scraped” finish on the bridges, along with a carbon-composite hairspring, making it unique both in terms of decoration and technical features.

As a result, the Monaco Carbon is as good looking as it is interesting. And despite the historical design inspiration, the combination of materials and finishing is entirely atypical of TAG Heuer.

And with an estimate of CHF50,000-100,000, the Monaco Carbon is affordable by Only Watch standards, though it will easily cross the high estimate and probably sell for a multiple of that. 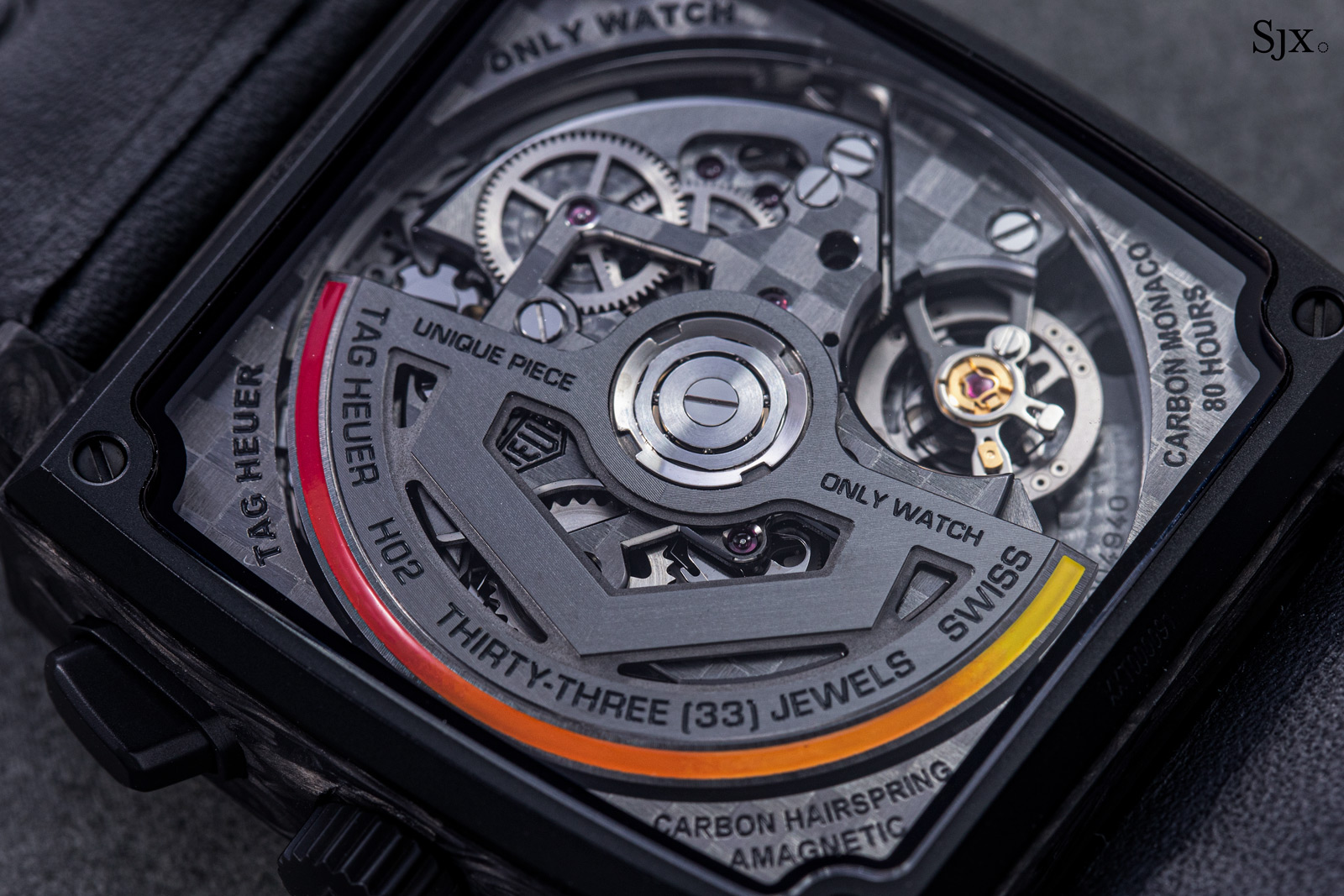 The designers of the Monaco Carbon clearly went all-out to create a contemporary aesthetic modelled on the vintage original. The contemporary element is most apparent in the liberal use of forged carbon, or more accurately carbon fibre-reinforced polymer composite. Characterised by its marbled appearance, forged carbon was developed by a partnership comprised of Lamborgini, Callaway Golf Company, and the University of Washington. It’s essentially tiny fragments of carbon fibre composite mixed with resin and then cured at high temperature and pressure, pressing the fragments together.

The advantage of forged carbon over traditional carbon fibre-reinforced polymers, which rely on large sheets of woven carbon fibre, is its ability to be formed in a range of complex shapes (as well as multi-directional strength). 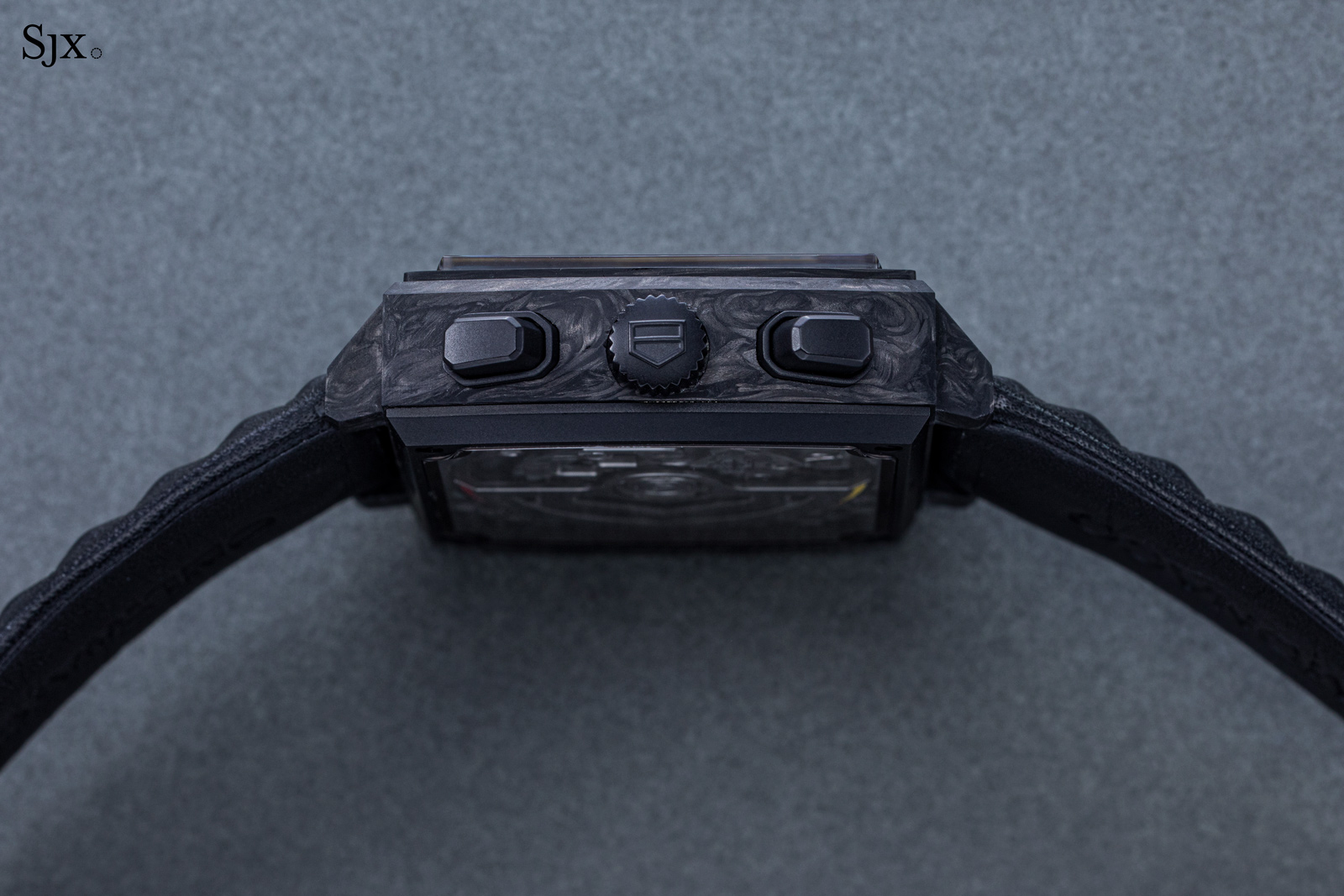 Forged carbon case isn’t exactly new for TAG Heuer, as the material was first used for the case of the Bamford Watch Department (BWD) Monaco limited edition of 2018.

But on the Monaco Carbon TAG Heuer has utilised the material to its fullest potential. Not only does the square case features sharp angles all round, but the skeletonised dial is even more angular. The dial even incorporates bevelling on its edges, though that is the result of filing and chamfering rather than manufacturing. 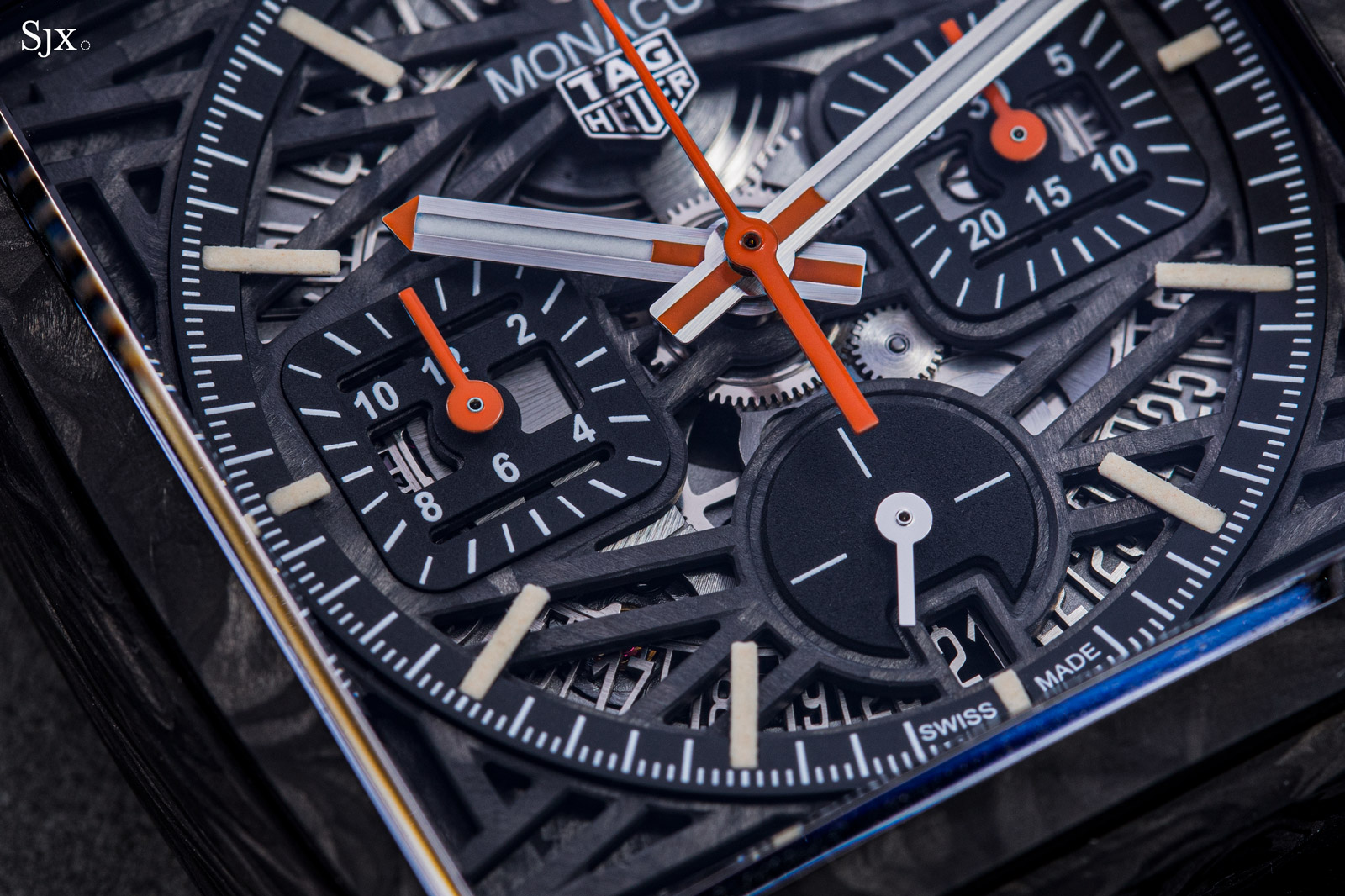 The star of the show is on the back, a point made clear with the extra-large sapphire crystal. Instead of  a conventional round window, the display back is panoramic, with the sapphire crystal stretching from end to end, leaving just a narrow border at its edges.

According to TAG Heuer it’s the largest sapphire back ever fitted to a Monaco, which allows for a better view of the movement from different angles, especially from the side.

While the movement is a Heuer 02, an in-house calibre widely used across TAG Heuer’s range, it has been finished to an entirely differently level – and upgraded with a special balance spring. 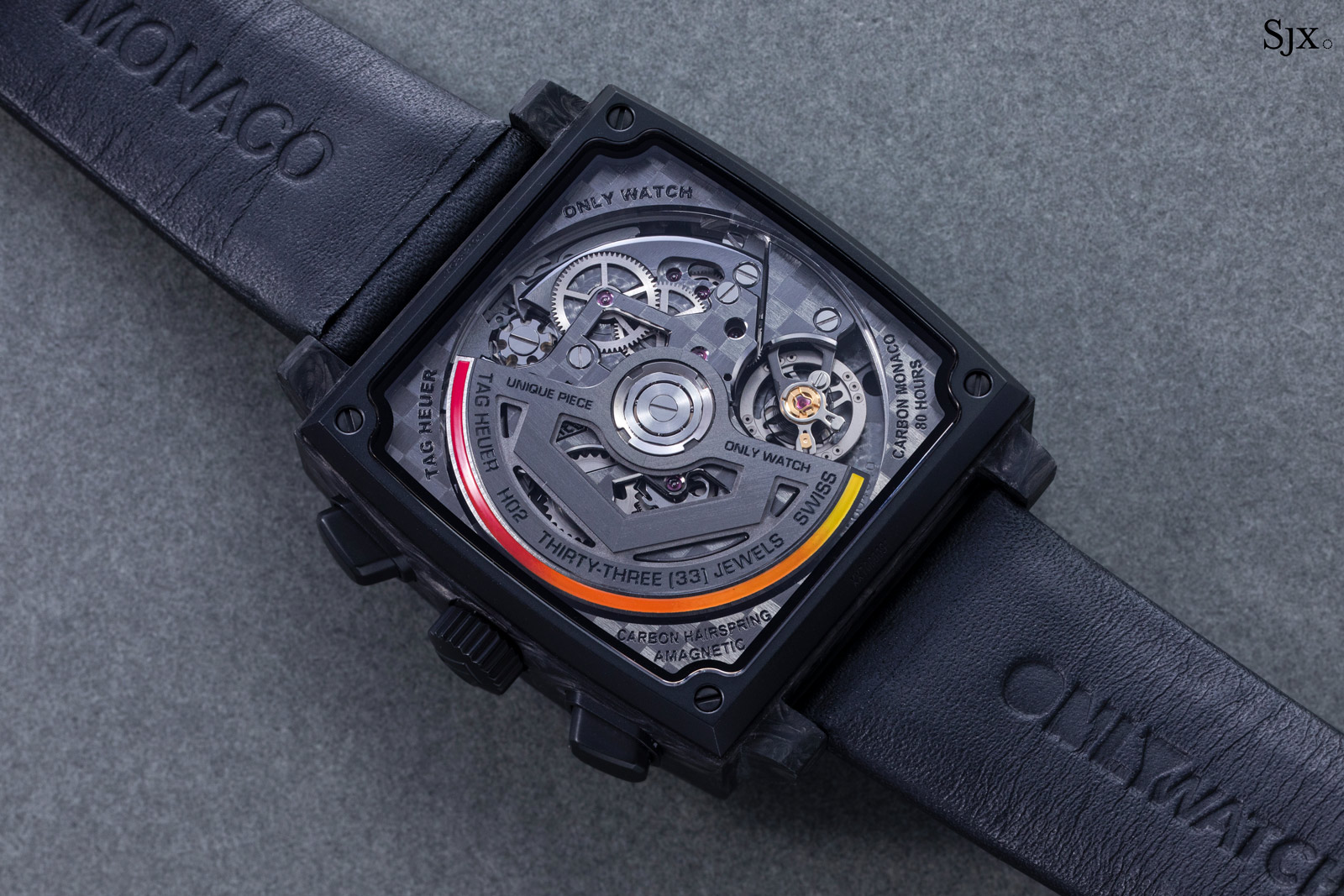 The Heuer 02 has both a vertical clutch and column wheel, as well as an 80-hour power reserve 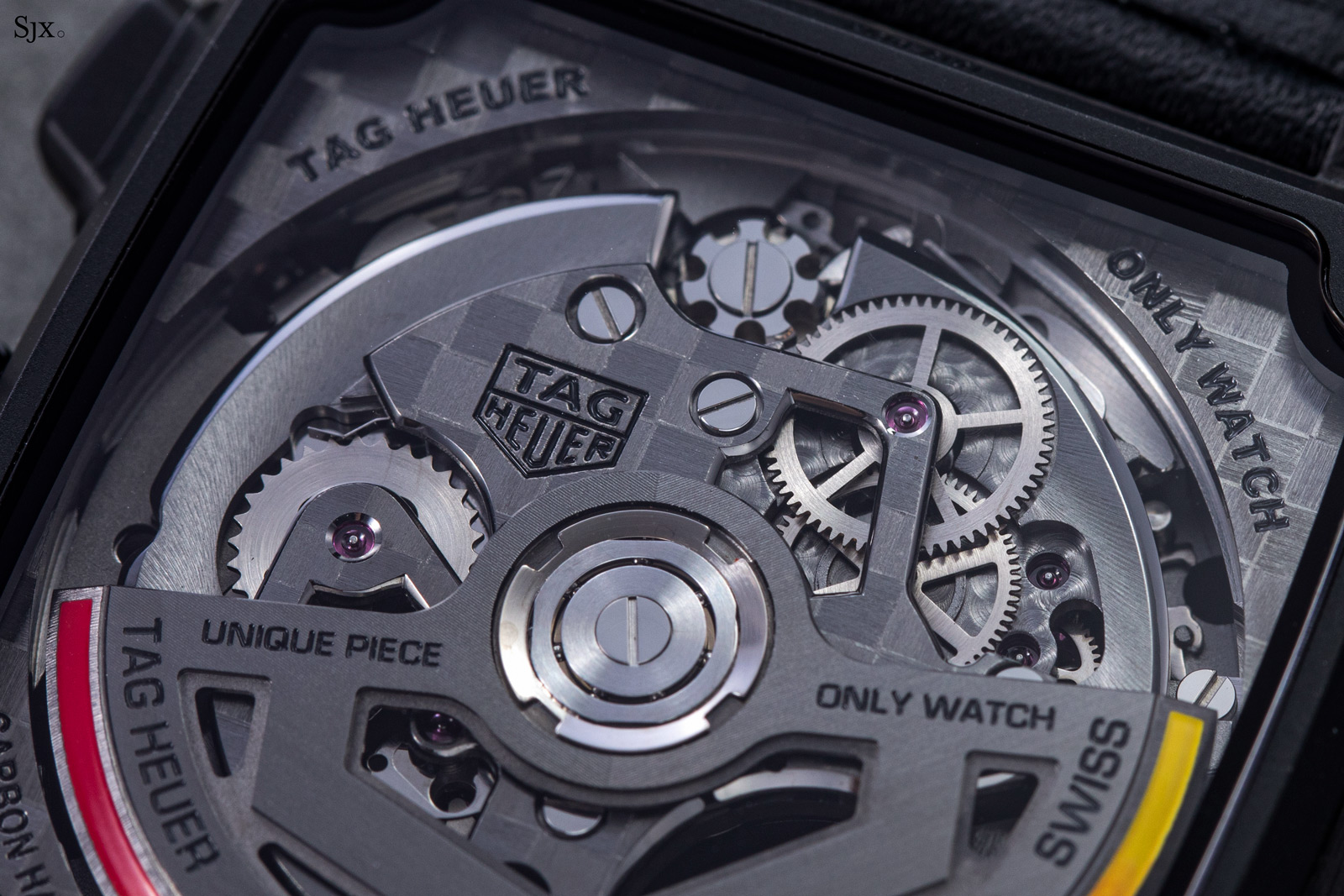 The rationale for the wide-open view of the movement is simple: show off the movement finishing, which was done by hand and unusual in style.

Some of the obvious, traditional elements of the decoration is the wide, rounded, and polished bevelling, or anglage, on the bridges. Importantly, the bevelling even incorporates a handful of inward angles, a detail that’s occasionally absent even in movements from prominent haute horlogerie brands.

Now widely seen as a must-have in a high-end movement, such anglage isn’t traditionally associated with TAG Heuer, so it immediately makes this Heuer 02 special. 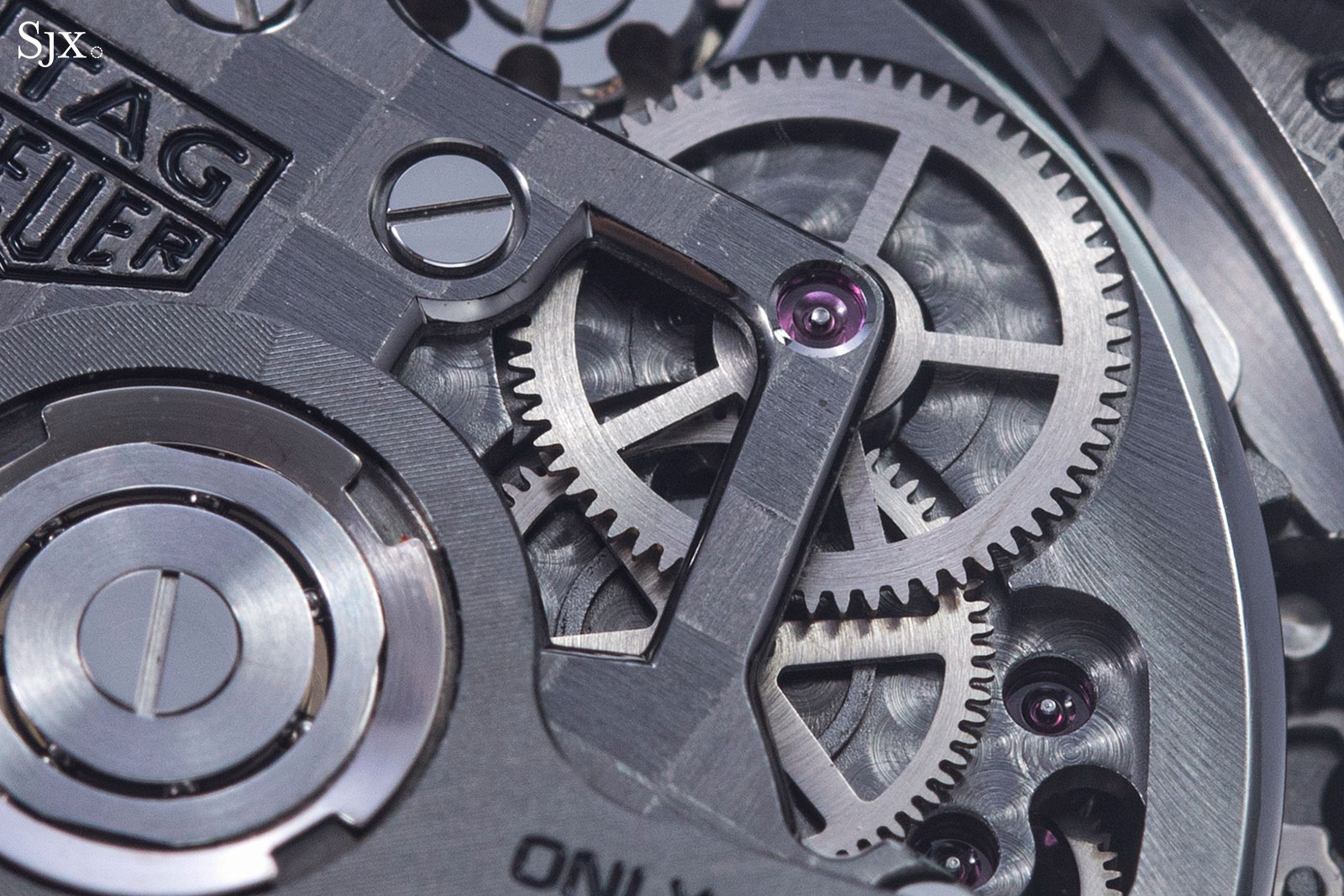 But most novel is the gratté finish on the bridges. French for “scrape”, gratté was also employed in the movement of the Greubel Forsey Hand Made 1.

While the technique was applied by Greubel Forsey to create random strokes that resemble brushwork, it forms a geometric pattern on the bridges of the Heuer 02. The “scrapes” are neatly laid out in alternating, opposing orientation, creating a chequerboard pattern that evokes a chequered flag, a subtle and clever nod to the Monaco’s auto racing heritage. That said, some parts of the movement are a bit industrial, including the perlage on the base plate and more notably the Etachron regulator for the balance. But that is probably inevitable, given that the calibre is a variant of the Heuer 02, which is a workhorse movement produced on an industrial scale. 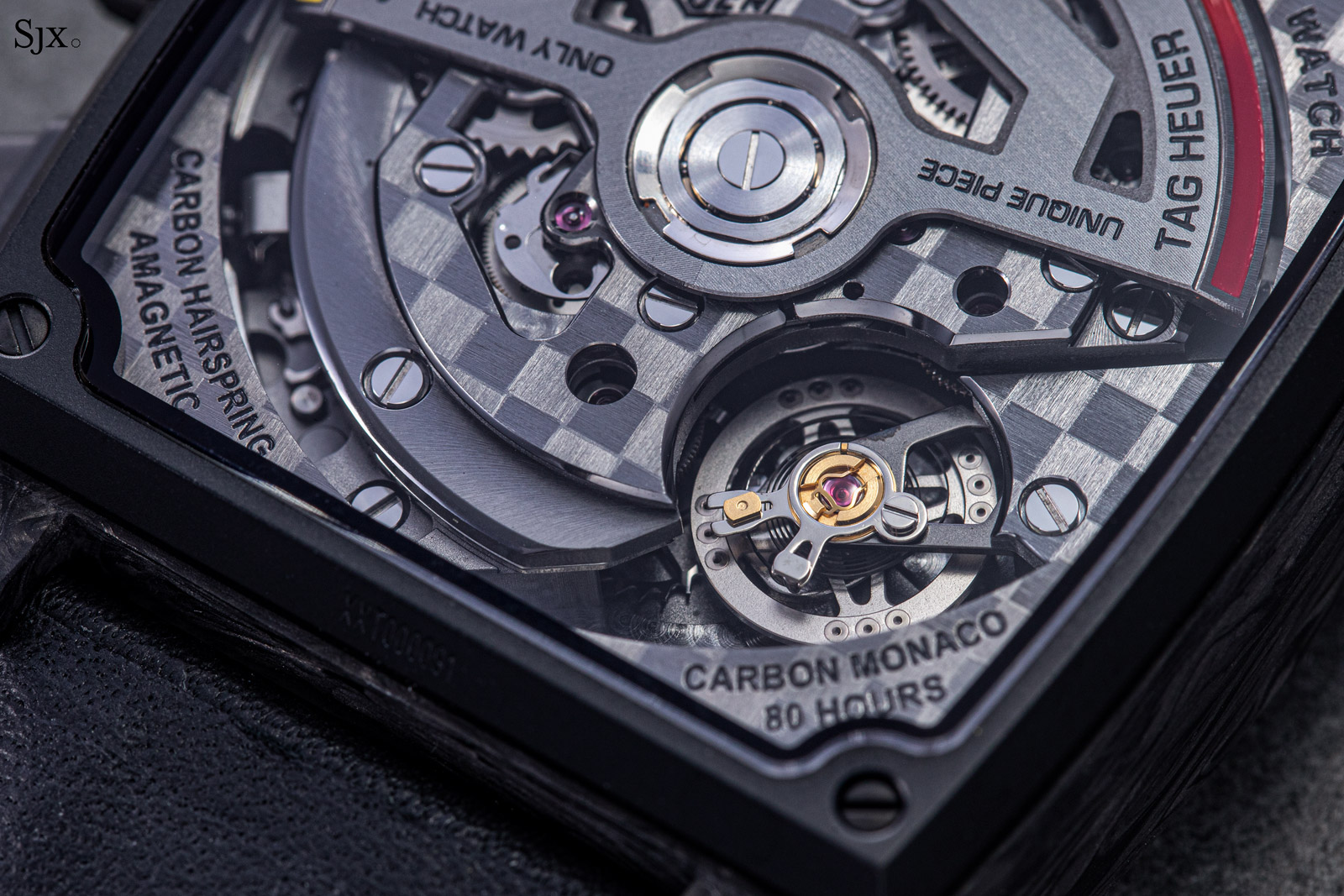 Mechanically the movement inside is almost identical to the standard except for one major upgrade: a carbon composite hairspring is non-magnetic and impervious to temperature changes. That promises extremely stable timekeeping regardless of external influences.

And because the hairspring is now carbon, the balance wheel has also been replaced. Instead of the Glucydur balance found in the standard movement, this Heuer 02 has what appears to be a two-piece balance wheel with an unusually wide rim riveted to its spokes. 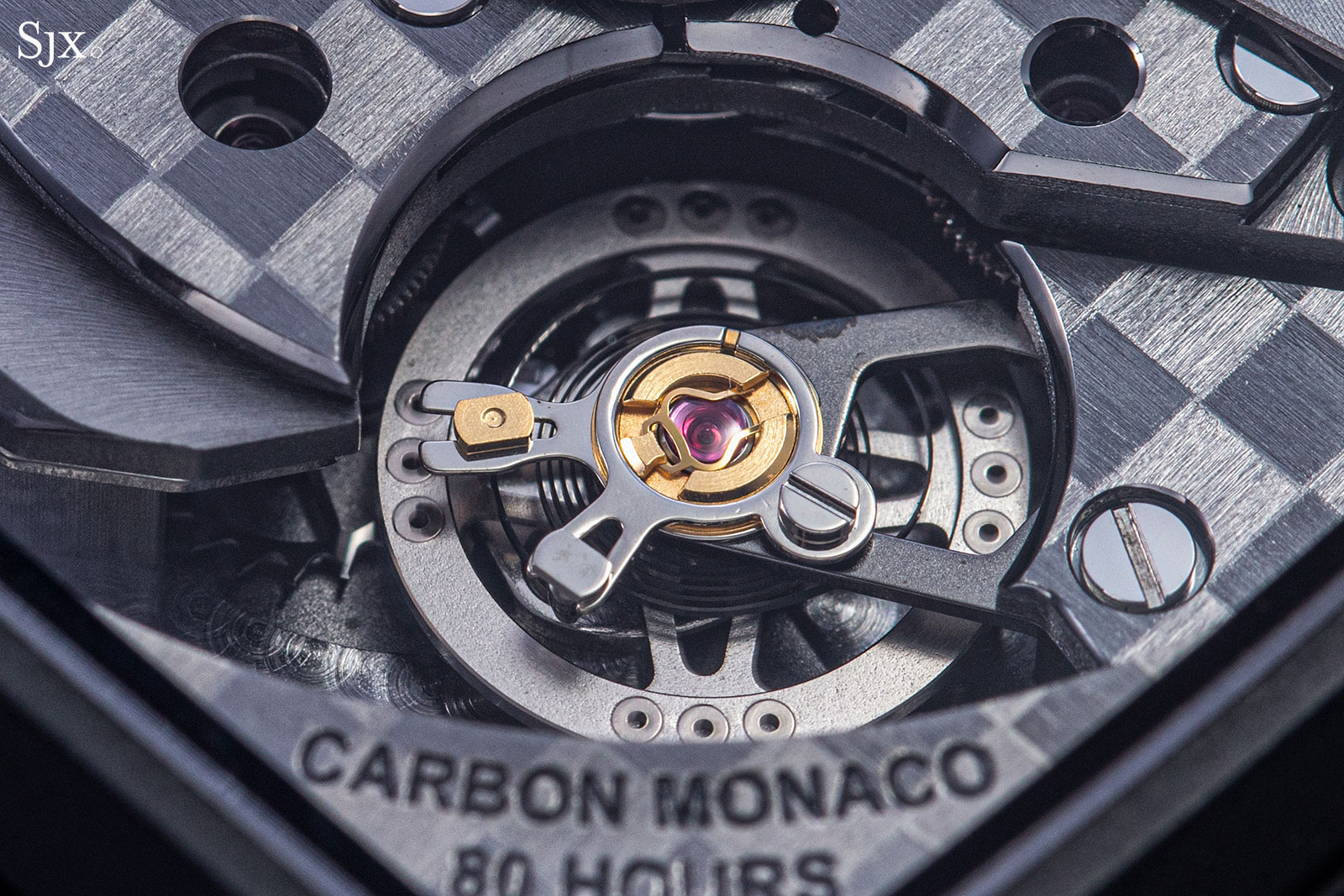