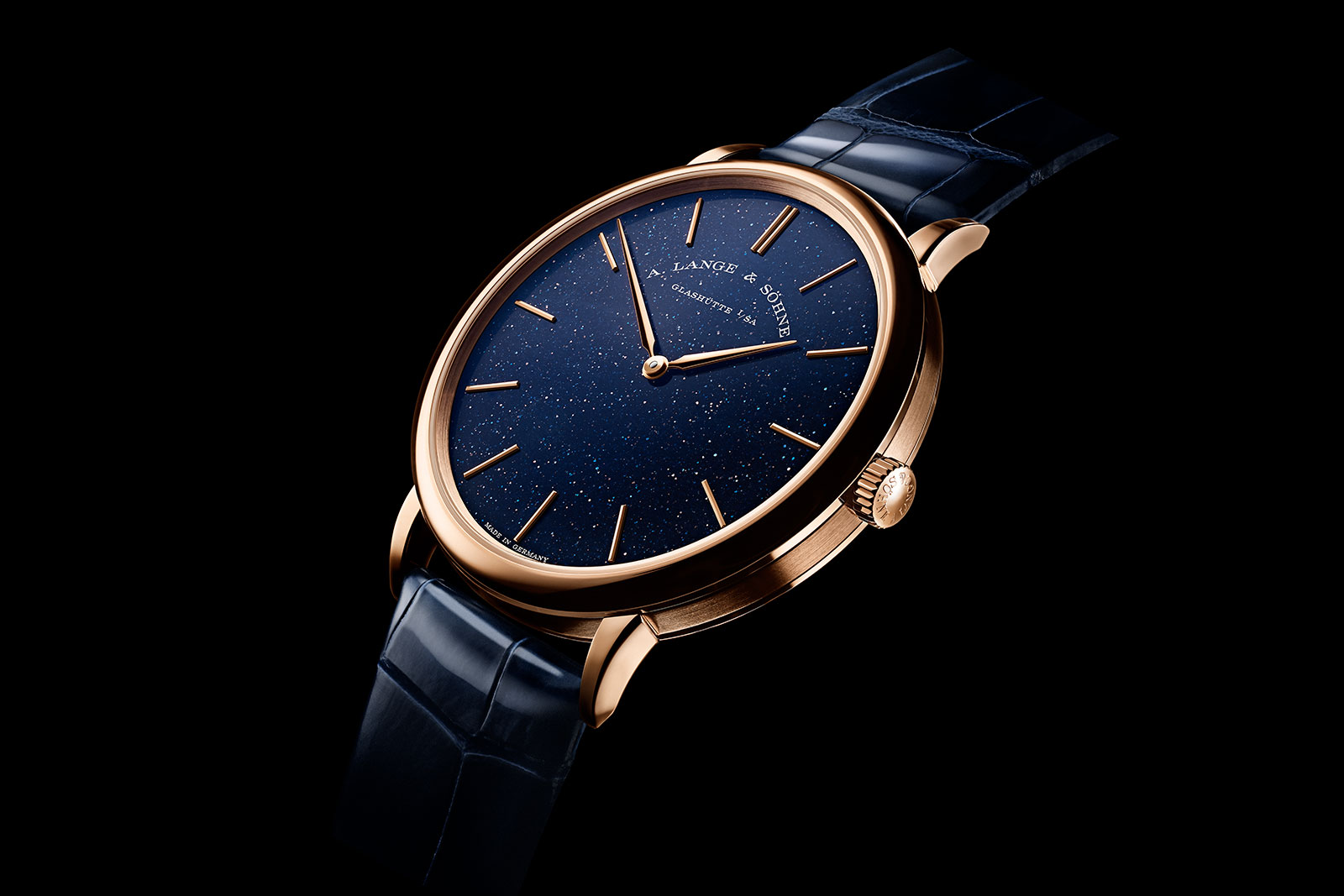 Three months after Watches & Wonders 2021 (where it debuted the Triple Split in pink gold amongst others), A. Lange & Söhne is now back with more new releases, as is now the norm with watch fairs having gone online.

Of the trio of new launches, the Saxonia Thin is the simplest, but no less striking. Clad in lively, blue aventurine glass and pink gold, the watch has a rich, sparkly aesthetic quite antithetical to the fuss-free style usually associated with the German watchmaker. 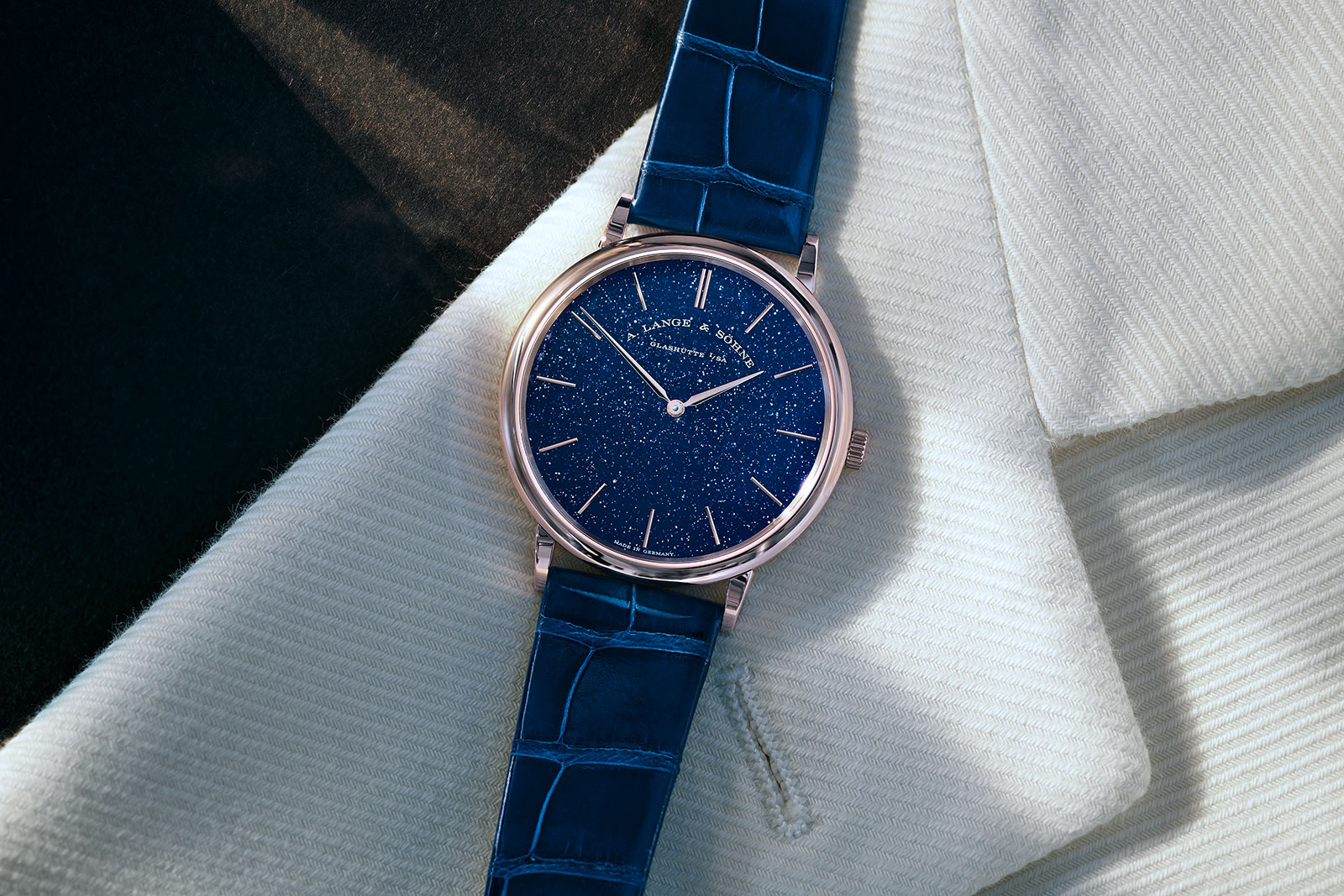 While flourishes like the aventurine-glass dial are uncommon for Lange in general, the sparkly glass dial is not new. In fact, the material was first used in the white gold Saxonia Thin back in 2017. The brand followed up with the same but with a black aventurine-glass dial last December, and then the pair of Little Lange 1 Moon Phase earlier this year. That’s four models with aventurine glass dials in as many years.

The new model is a first, in that it matches the blue aventurine-glass dial with a pink gold case, giving the watch a warm aesthetic not found in earlier versions, or even the broader catalogue where the combination of pink gold and blue is found only on the recent Triple Split. This is no doubt a good news for collectors that already have everything from the brand and want something different. Still, the frequency of aventurine-glass inevitably chips away at its uniqueness. 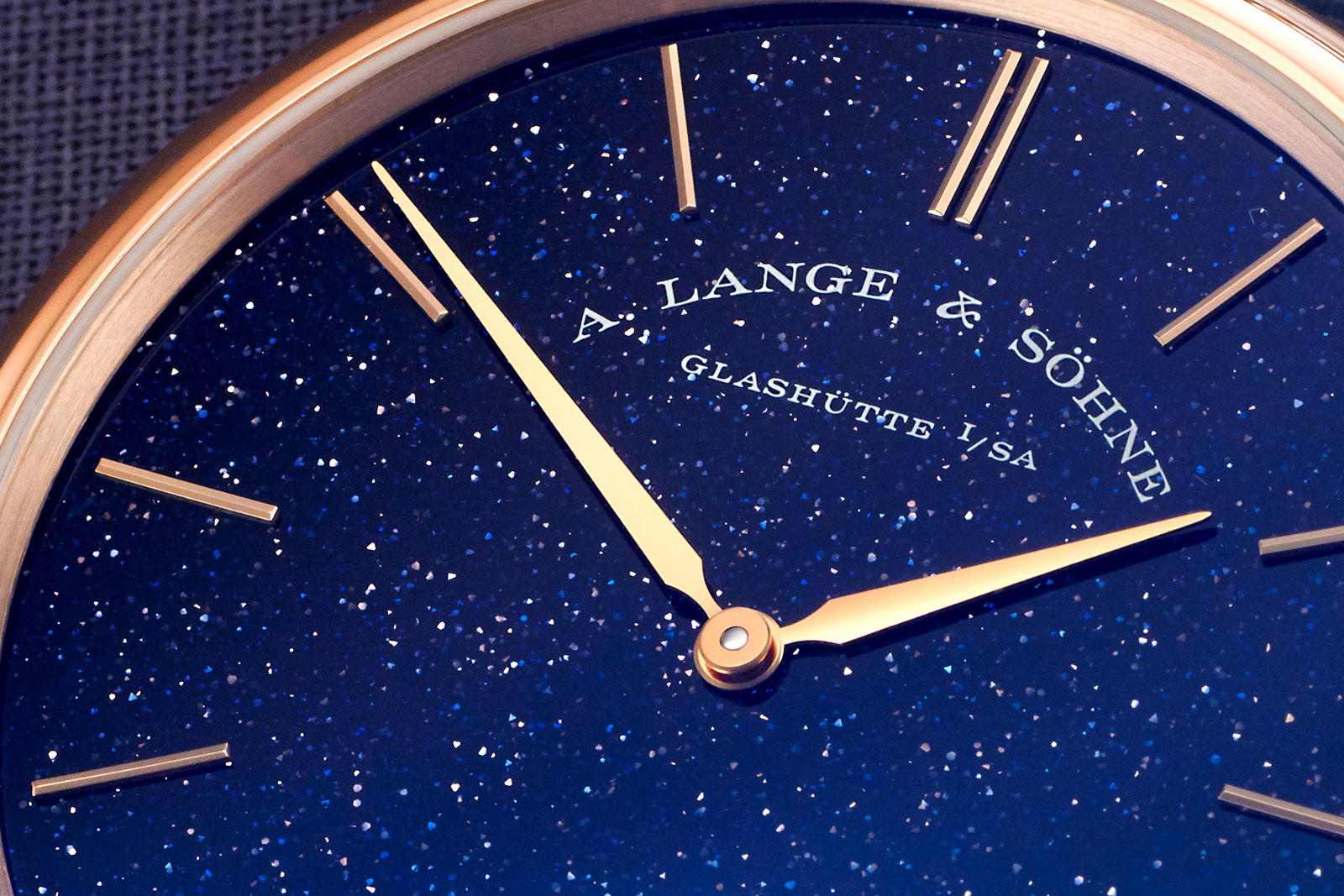 One nitpick I have about the watch is personal – I find the Saxonia Thin too wide and flat. While the 40 mm diameter is moderate, the height of 6.2 mm gives the case proportions that seem stretched. And because the case is thin, the lugs are relatively narrow, a departure from the sturdy lugs found on most Lange watches.

That said, amongst all the variants of the Saxonia Thin, the aventurine-glass models are the ones to get. The shimmering dial makes up for any shortcomings, giving it a distinctive, interesting look that is unusual for a Lange. 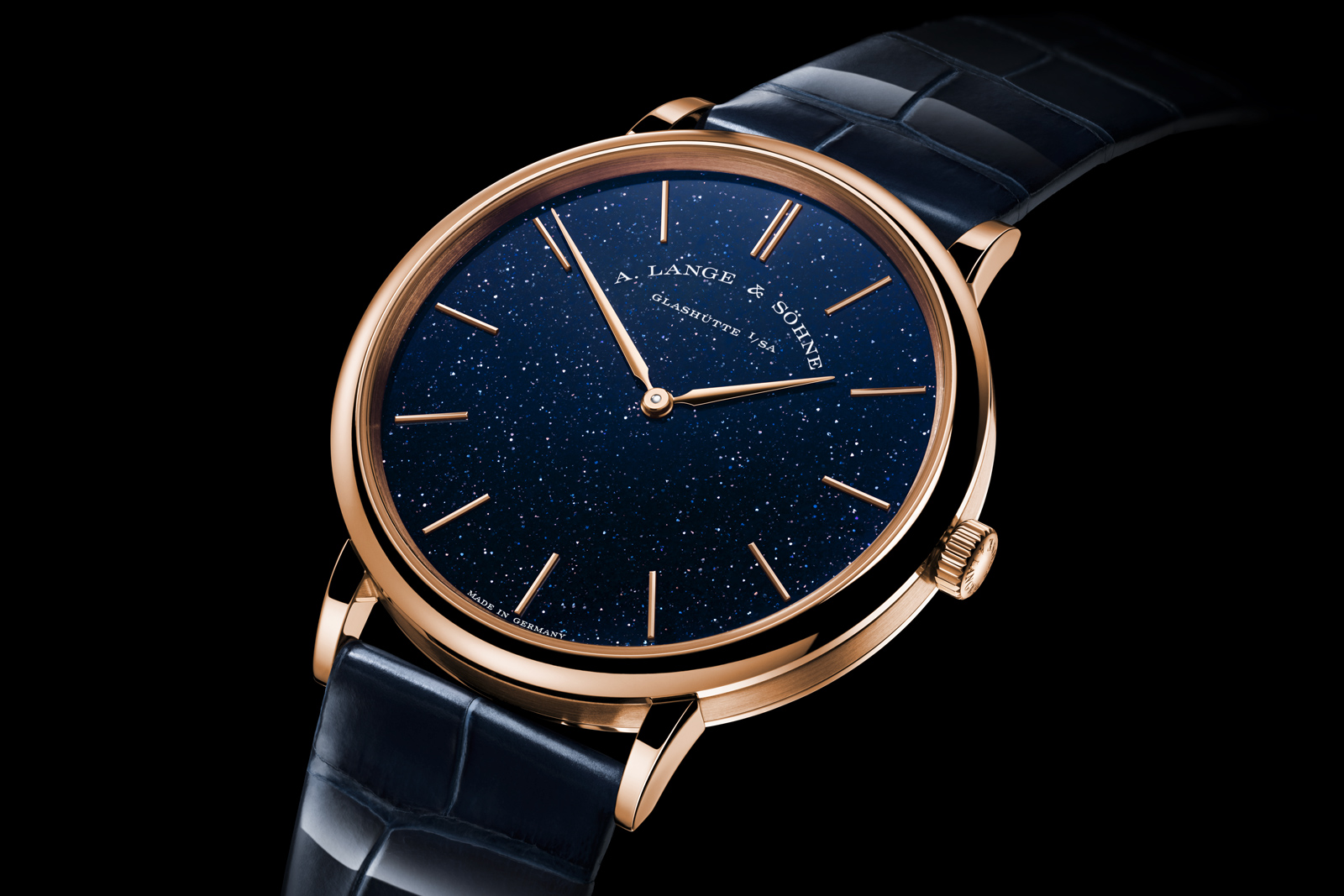 Priced at around US$28,000, the new Saxonia Thin costs about 60% more than the standard version with a silver dial that has a smaller, 37 mm case.

That’s a big disparity but the price is in line with past aventurine-glass editions, costing just a bit more than its white gold counterpart launched last year, which sold out despite the steep premium for the dial.

On the subject of demand and supply, the new Saxonia Thin, as well as the other two new launches, are limited editions. That make for nine limited editions, or ten if you count the Lange 1 Timezone introduced last June, in the last 12 months, which feels a bit much, especially for a brand that doesn’t make many watches to begin with.

Granted, uber-complicated timepieces constrained by production capacity or special occasions that are dear to the brand make sense as limited editions, or sometimes as an opening move for a new model to gain traction. But in the case of the Saxonia Thin, limiting the edition is arguably unnecessary for the brand, which has been doing well in recent years, and exceptionally well in recent months. 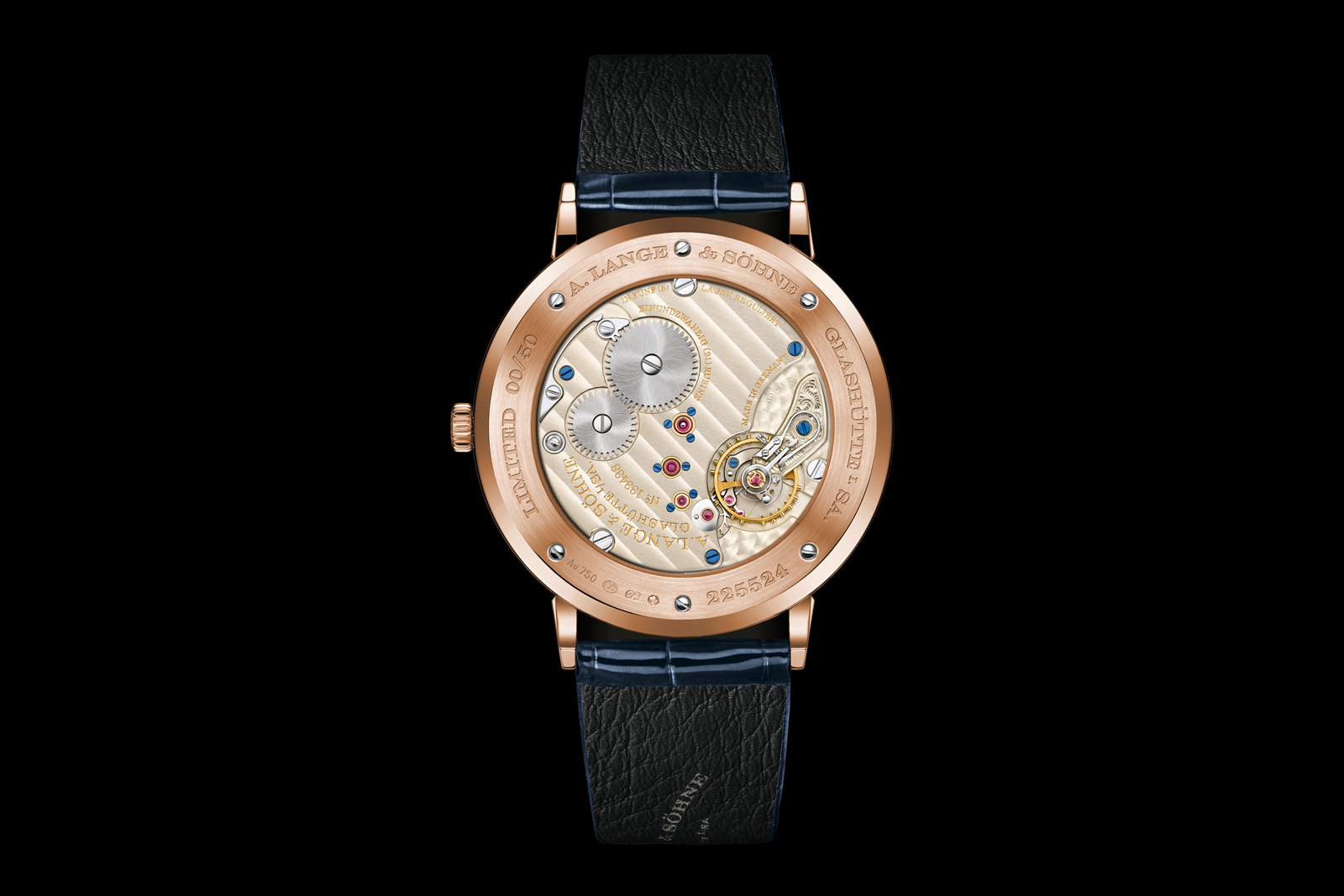 Like all Lange watches, the Saxonia Thin is carefully finished through and through. But the latest version has a bit more – an aventurine-glass dial. It’s made up of a layer of glass imbued with metallic flakes, bonded to a solid-silver dial base. And on the aventurine glass surface are twelve thin, applied indices of solid gold. 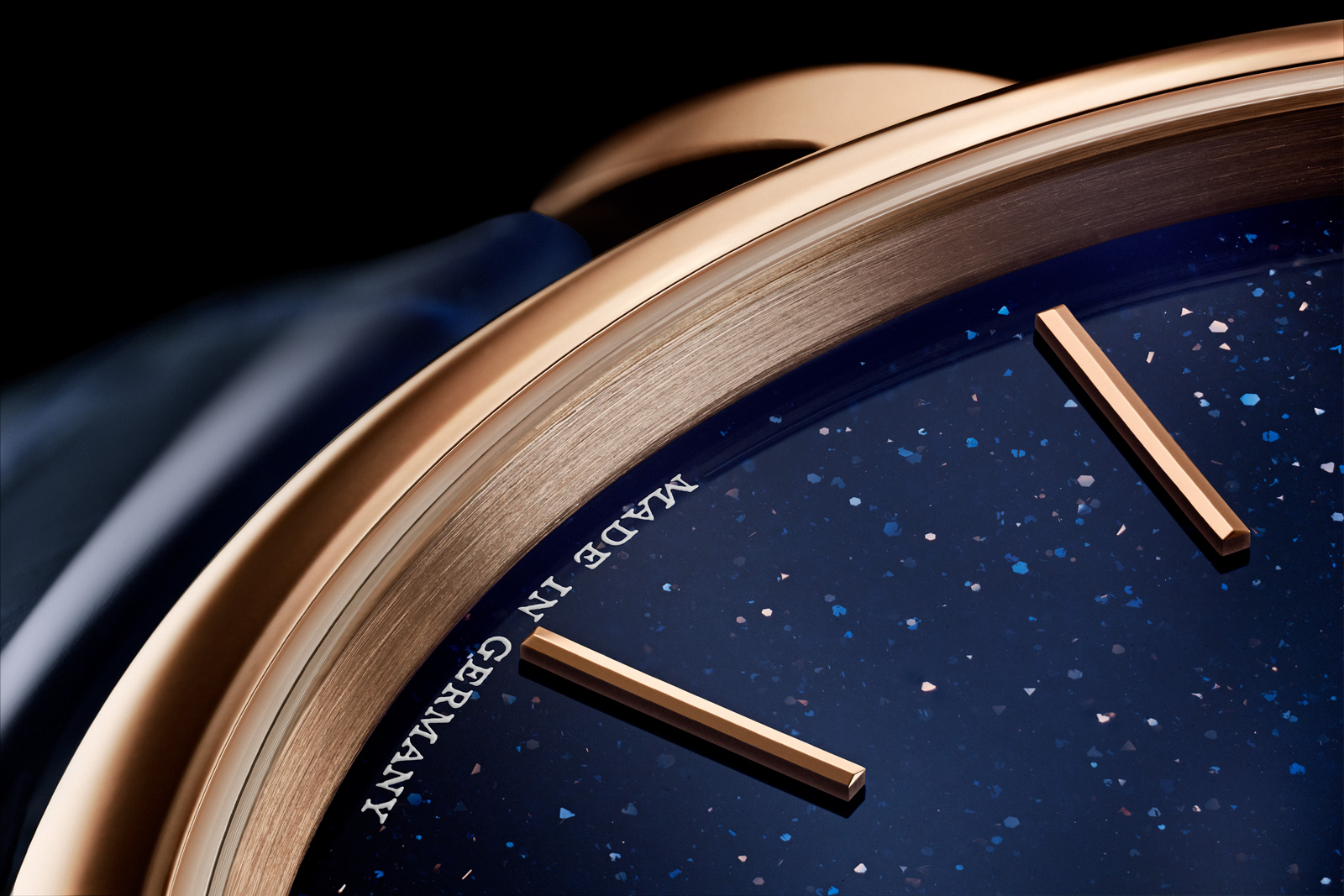 Of course, the finishing of the movement is outstanding for a largish brand. The anglage, for instance, is done manually – a watchmaker uses a handheld tool to carefully round and polish the edges of the bridges

Though the L093.1 inside is evidently a simple movement, it does have a feature found only in a handful of other movements, a traditional balance with screws that’s free sprung. Most Lange movements with free-sprung balances are more modern in style, with either disc-shaped inertia weights or recessed screws. 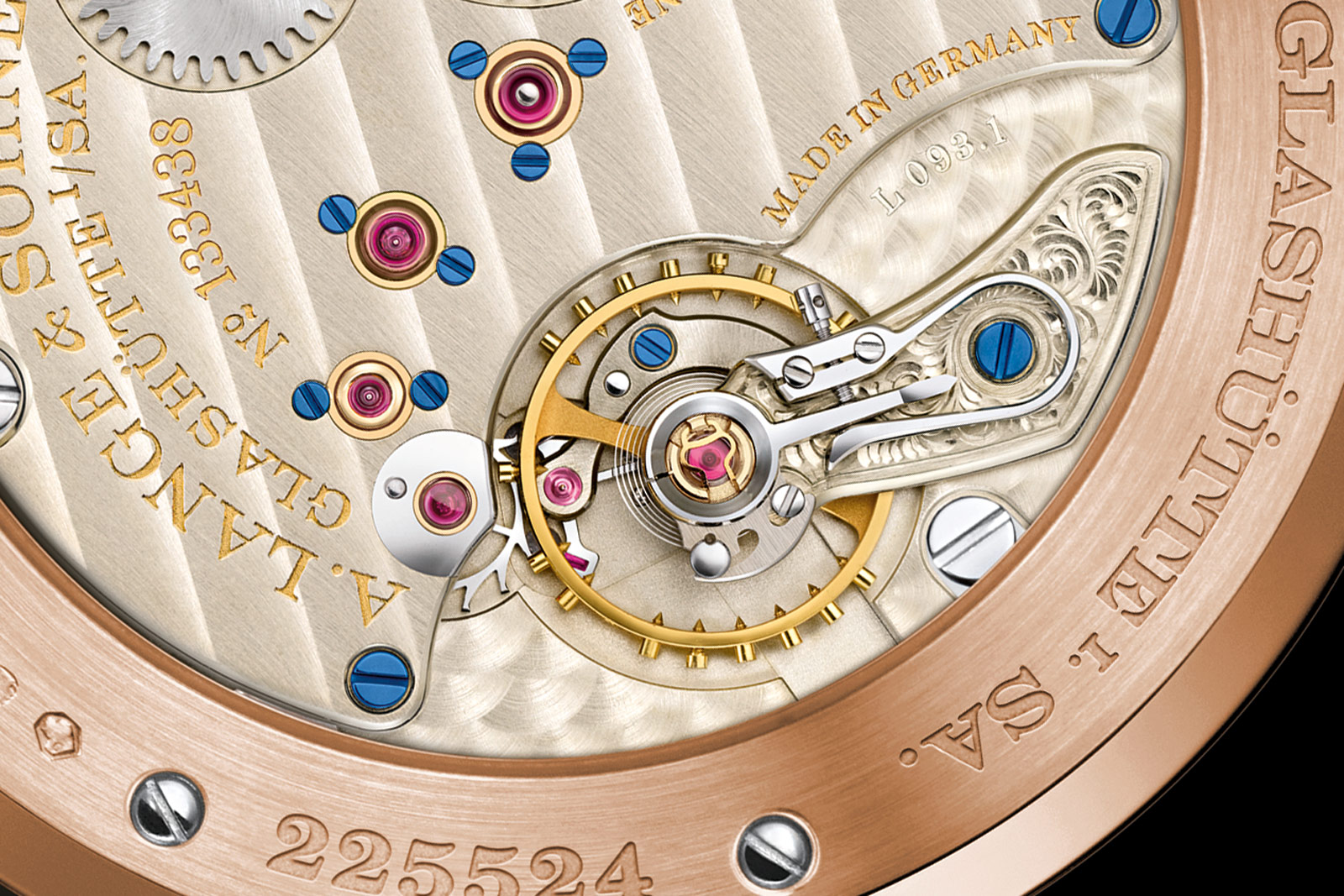