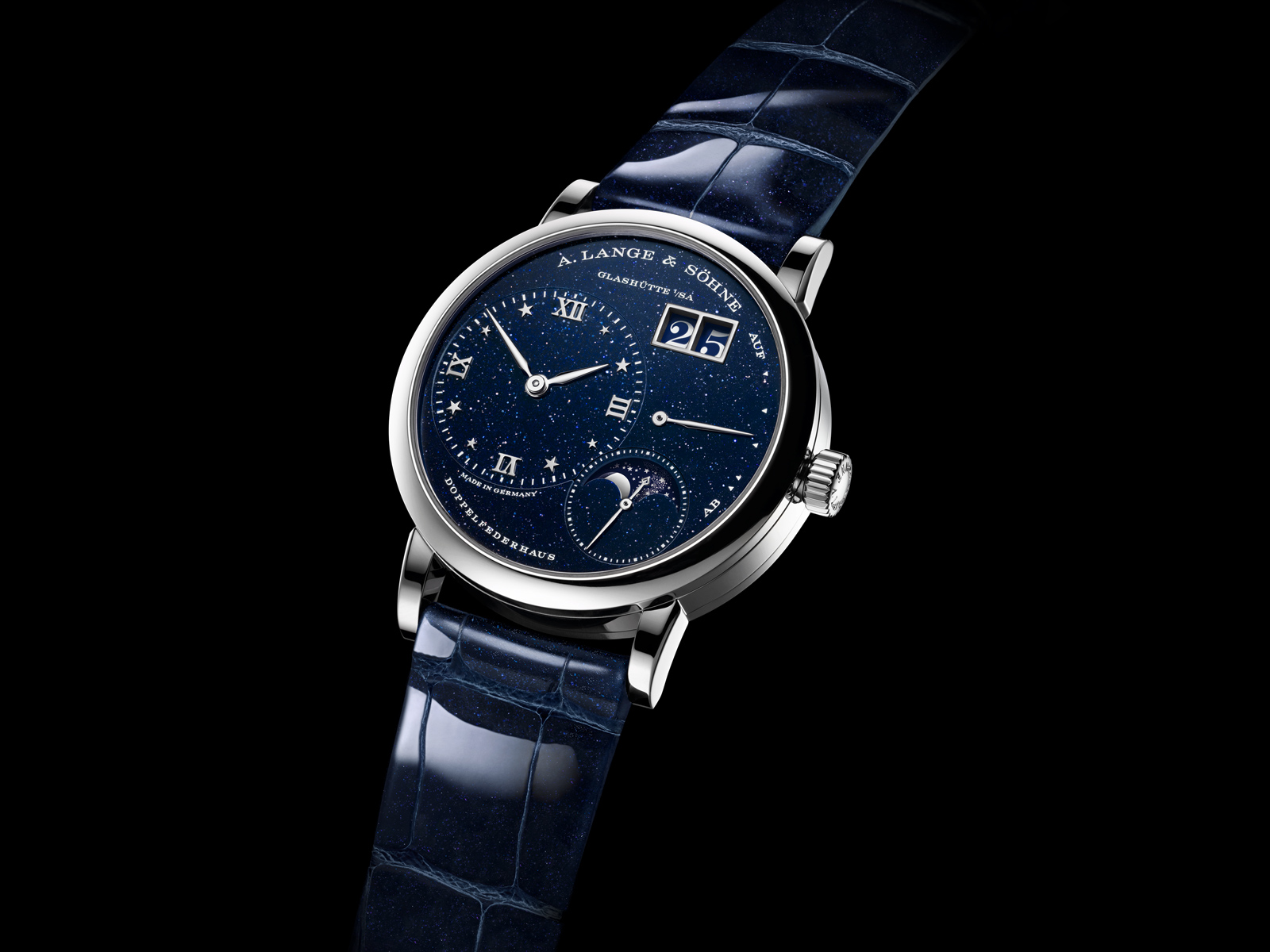 Previously available with a guilloche dial, as well as the silver-and-blue livery for the brand’s 25th anniversary, the model now gets a sparkly new look with the Little Lange 1 Moon Phase Aventurine. And because it’s historically been a women’s timepiece, the new model includes a variant with 56 brilliant-cut diamonds on the bezel. 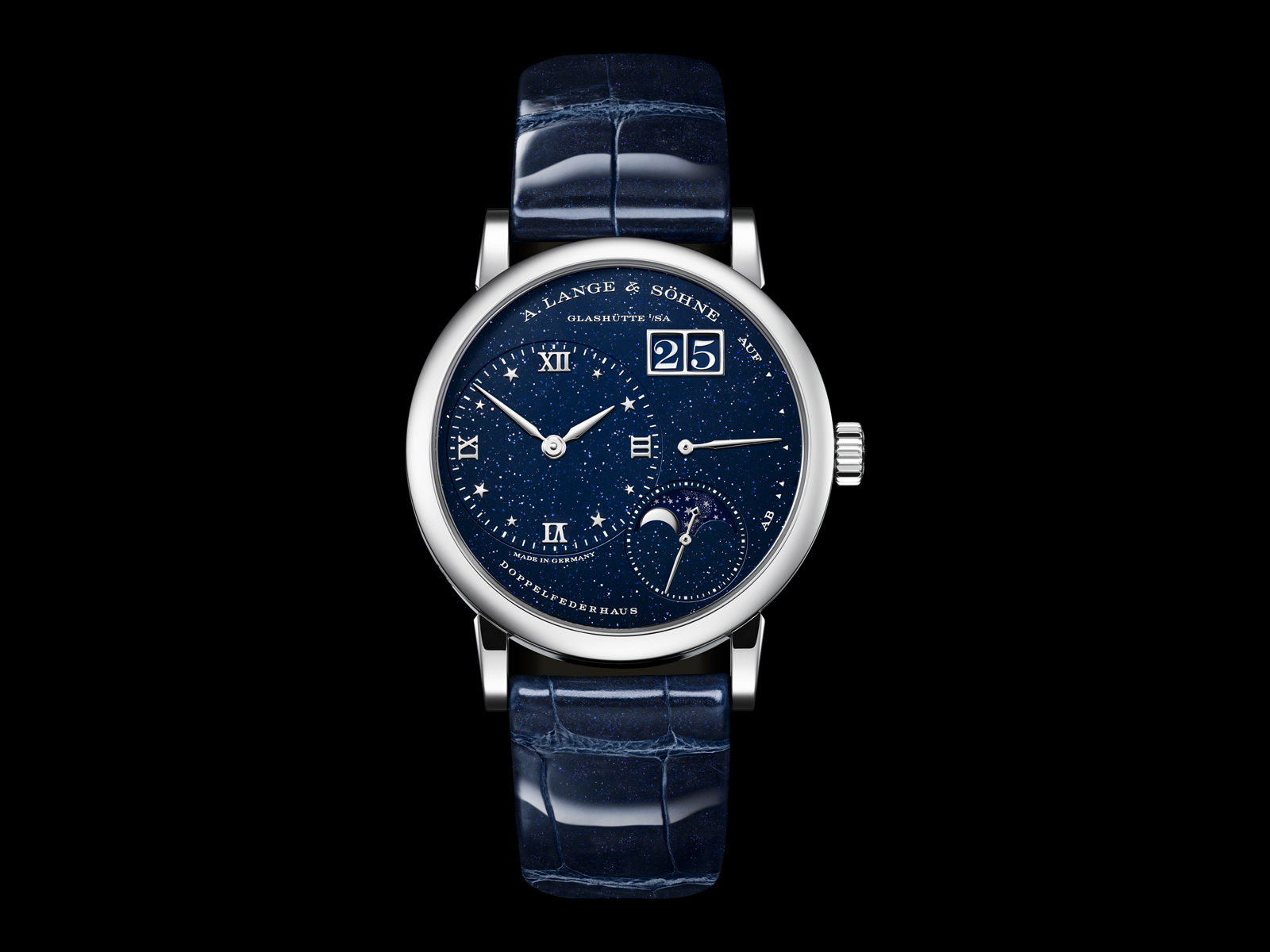 Lange seemingly used the entry-level Saxonia to gauge the demand for aventurine glass (back in 2018). Consumers no doubt responded with a resounding yes, because we now see the same material in the Lange 1, the brand’s flagship product line.

The new Little Lange 1 is a showstopper with its aventurine glass dial. Lange’s watches are mostly equipped with either a silver or black dial, possessing a sort of German austerity. However, in recent years Lange has been experimenting with dials in atypical colours or materials – like the recent Saxonia that also has an aventurine-glass dial – and the new Little Lange 1 Moon Phase continues that trend. 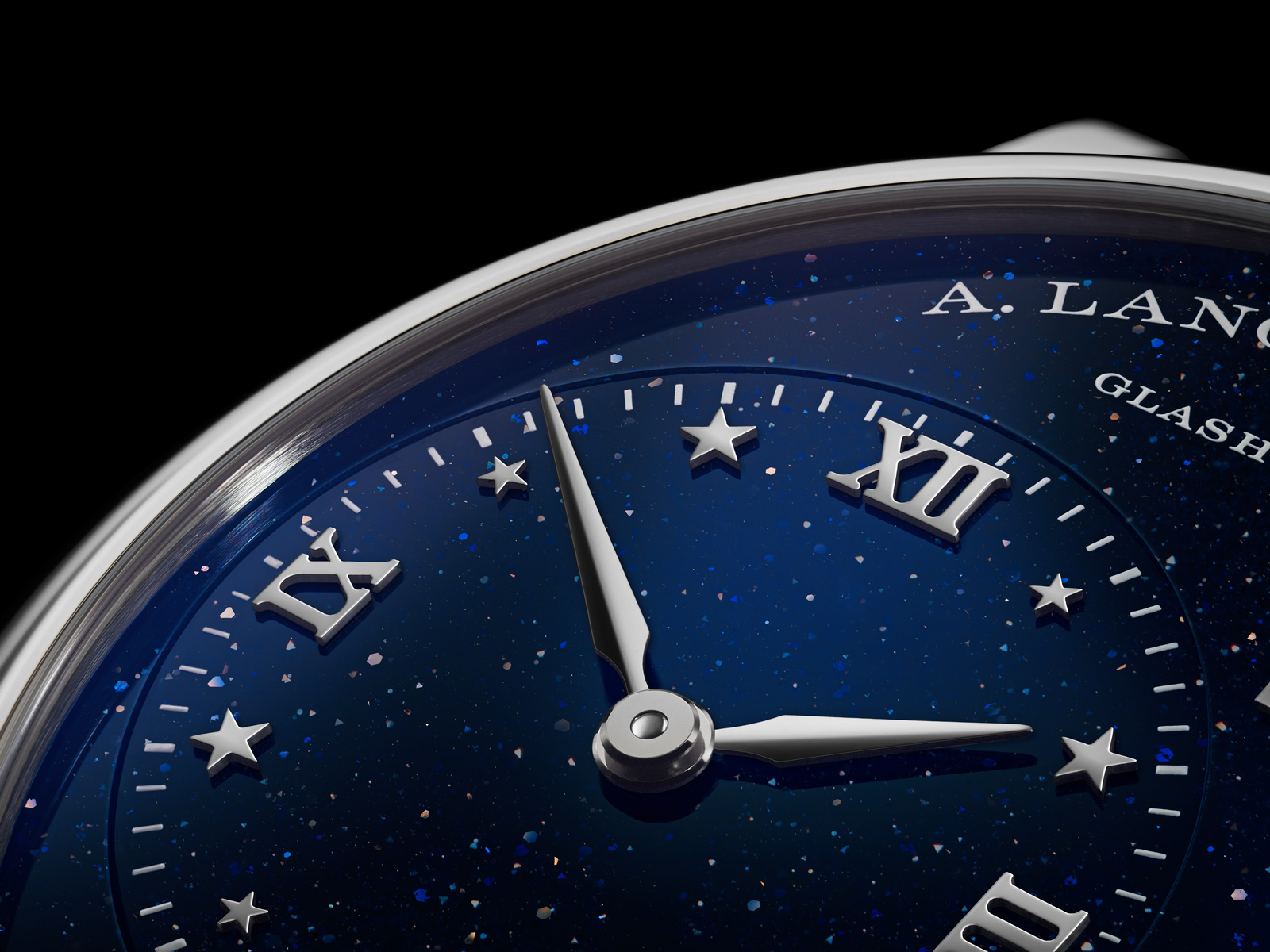 The aventurine dial works even better here than it does on the time-only Saxonia due to the thematic congruence with the moon phase. Meant to evoke a “bright moonlit night” according to Lange, the dial does look stunning in the press photos. And although I’m not usually a fan of bling, the diamond bezel is well integrated into the design, culminating in a look that is classy and elegant, instead of being ostentatious and gaudy.

With its 36.8 mm case, the Little Lange 1 Moon Phase is a great size for the female wrist, or perhaps men who prefer a smaller watch. And at €42,800 for the base model, the new watch is actually priced the same as its predecessors, despite the striking aventurine dial. making it a great option for someone looking for a smaller-but-special Lange 1. 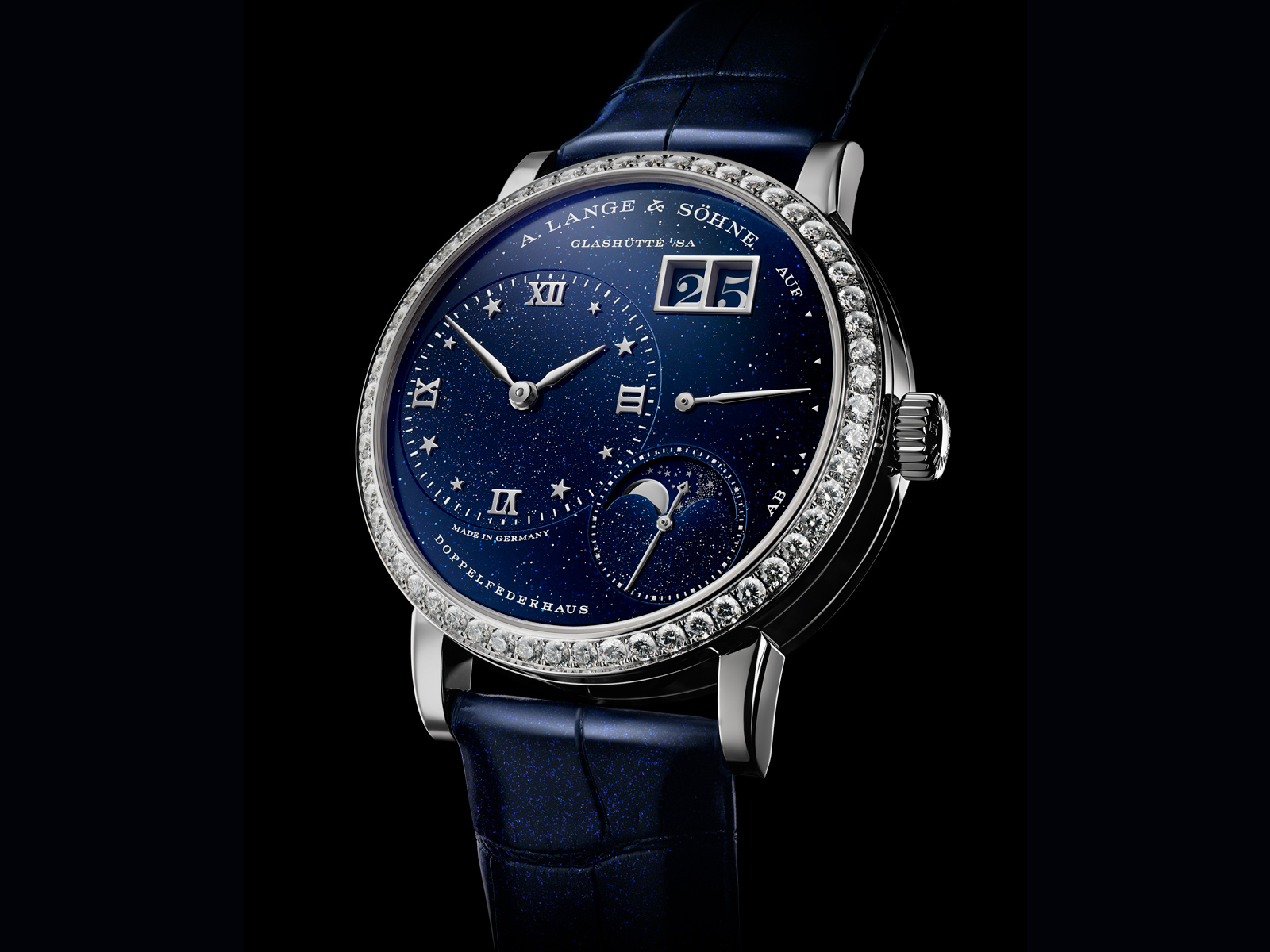 The Little Lange 1 Moon Phase with a diamond bezel

According to Lange, the glass is “cast” onto the solid-silver dial disc, meaning it is applied to the dial in its molten state before being allowed to cool and harden. 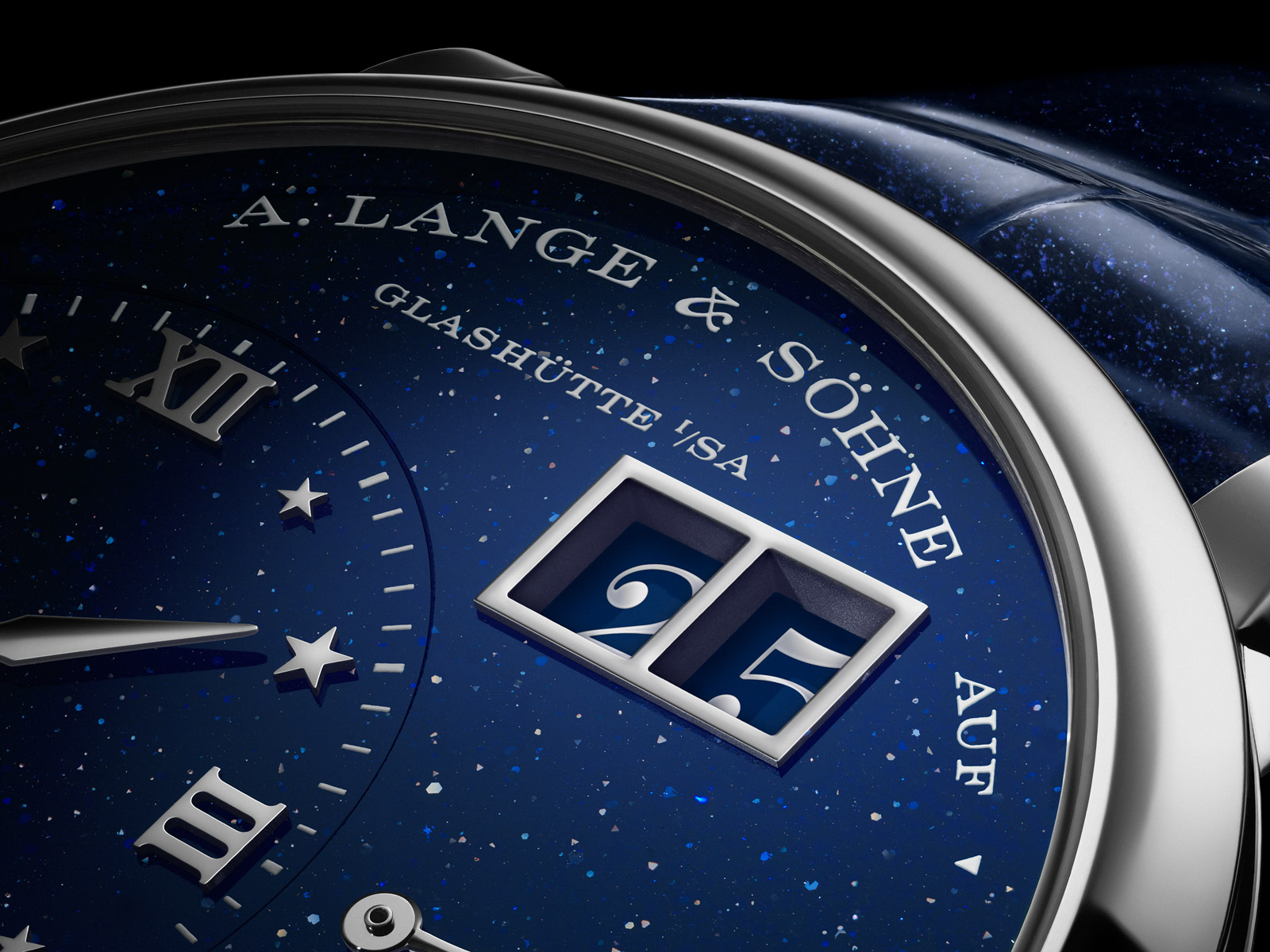 Interestingly, the usual diamond-shaped hour indices of the Lange 1 have been replaced by star-shaped hour markers. A subtle change that works wonders, the star hour markers are right at home with the celestial theme of the watch.

In addition, the lunar disk is white gold, and printed with a tapestry of 628 stars. It appears more intricately detailed than the moon phase indicators found on previous iterations of the model, and complements the dark blue hue of the dial perfectly.

The moon phase display is accurate to a day in 122.6 years – the norm in watchmaking – and can be adjusted via a recessed pusher in the case between seven and eight o’clock. There’s also another recessed pusher between 10 and 11 o’clock that advances the outsized date. 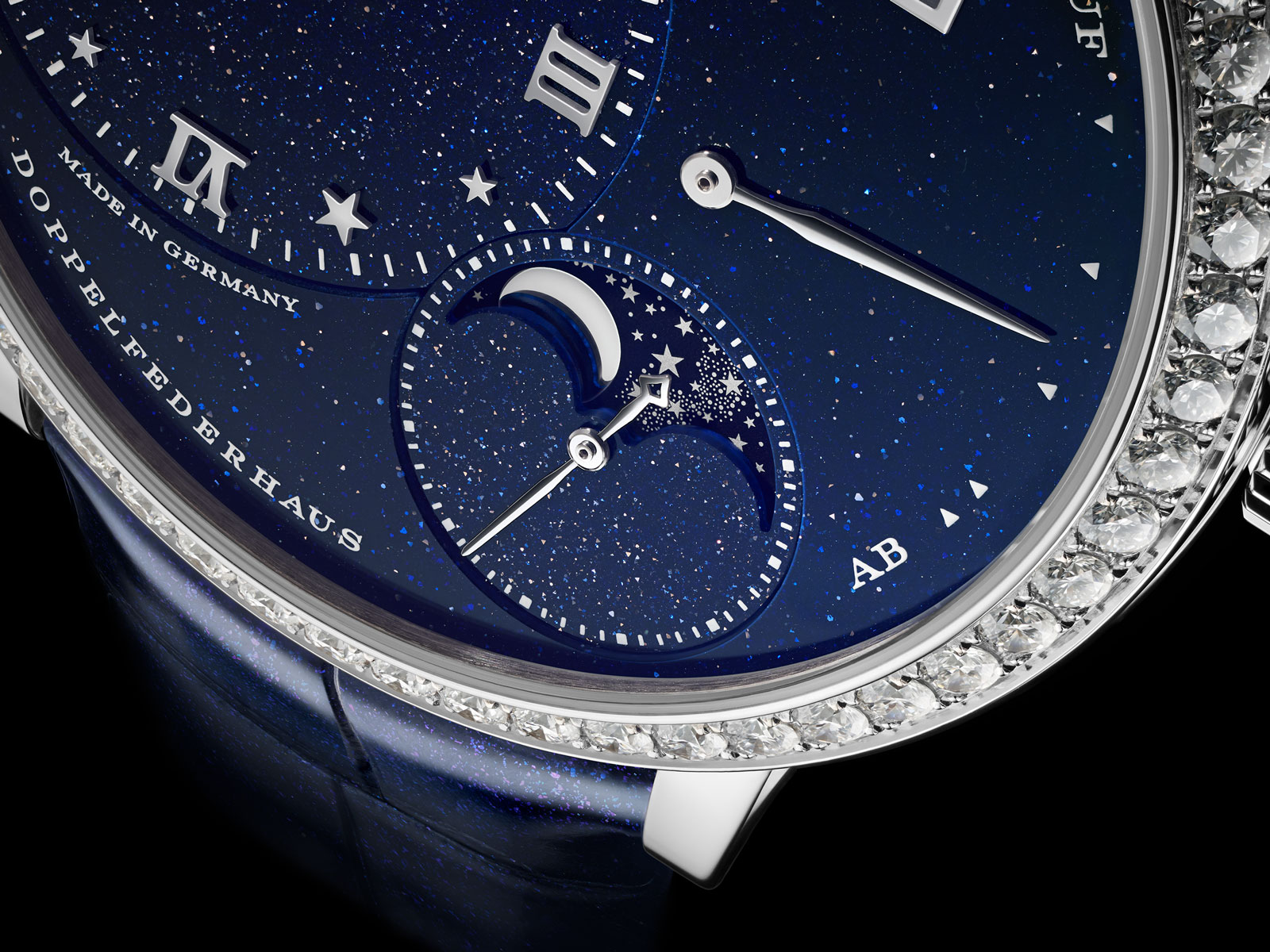 The watch is powered by the manually-wound L121.2, which is based upon the second-generation Lange 1 calibre from 2015. It features an instantaneous jumping date display, stops-seconds, and a power reserve of 72 hours, courtesy of its twin mainsprings.

As typical of Lange, the movement is decorated beautifully, with its signature three-quarter plate decorated with Glashütte striping, a hand-engraved balance cock, and gold chatons held in place by heat-blued screws – all of which can be appreciated through the sapphire exhibition case back. 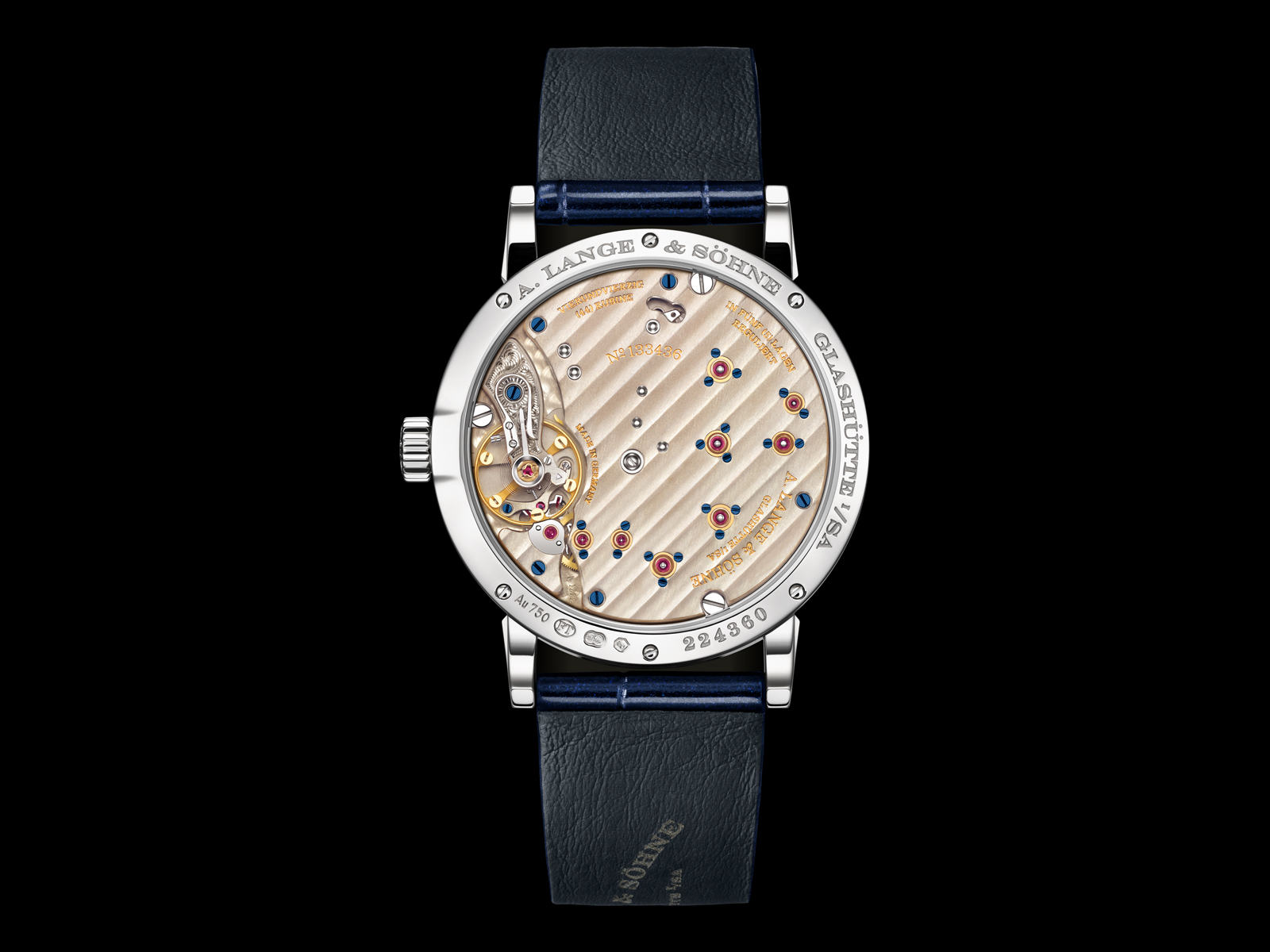 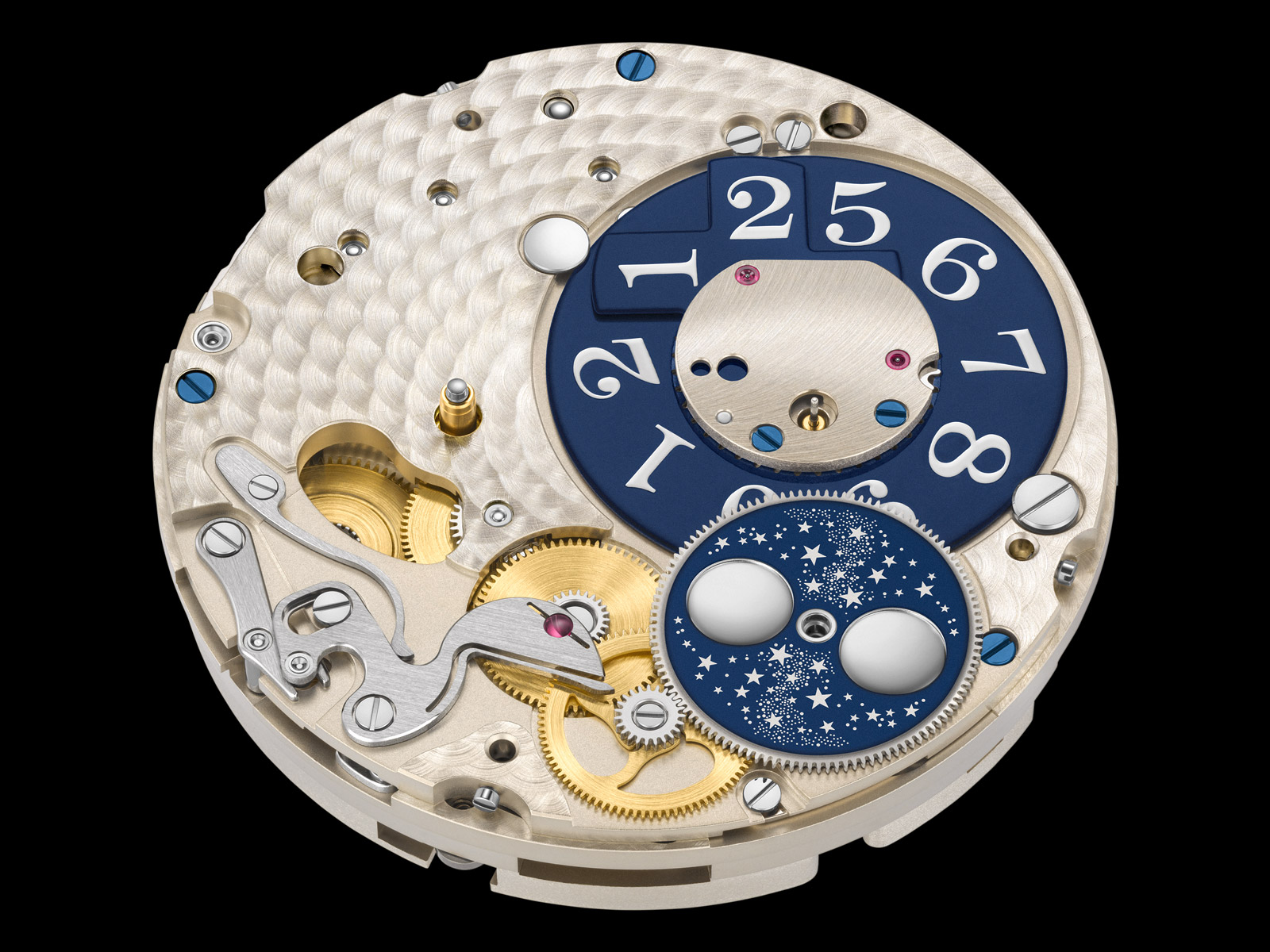 Number six in the anniversary set.