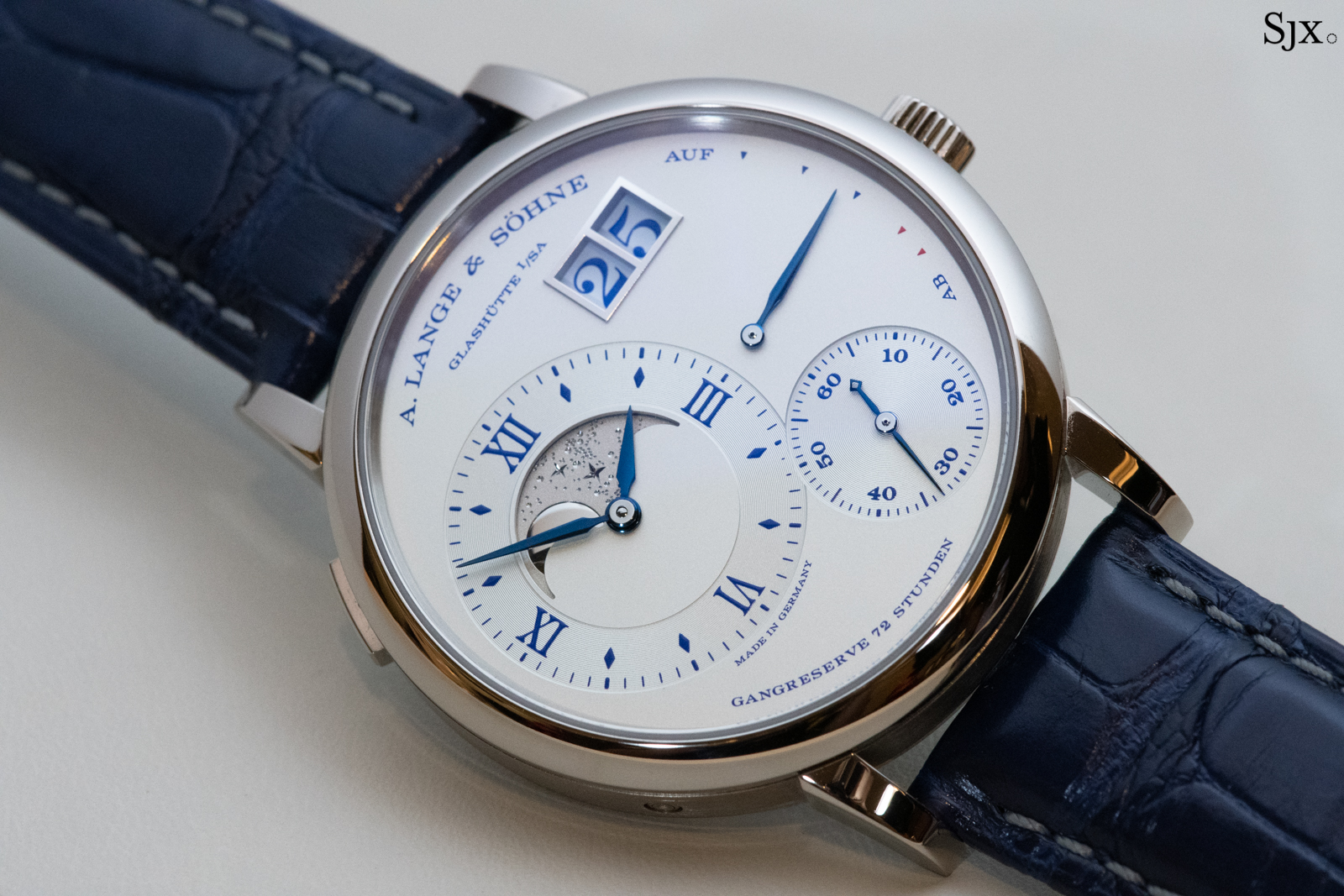 Last year was the 25th anniversary of A. Lange & Söhne’s modern-day revival in 1994, also the debut year of the iconic Lange 1. For the occasion, ten limited edition Lange 1 models were unveiled over the course of the year. The line-up ranged from the basic to the ultra complicated, but one of the standouts was a model in the middle of the spectrum – the Grand Lange 1 Moonphase “25th Anniversary”.

Introduced in 2003, the Grand Lange 1 was essentially an upsized Lange 1, with a larger but slightly thinner case – and the same L901.0 movement found in the standard Lange 1. The result was an awkward, cramped dial with overlapping displays that abandoned the orderly asymmetry of the classic Lange 1 dial.

Nine years later, the Grand Lange 1 movement was redesigned to create the cal. L095.1, which accommodated all of the indications on a dial with the correct proportions. A moon phase was added to the movement the following year, which increased its thickness slightly. The 25th anniversary edition is a second generation Grand Lange 1 Moon Phase with a subtle, beautiful twist – and one of the most appealing models from the anniversary line-up.

Though large, the watch is notably flat, giving it an elegant profile on the wrist.

With a height of 9.4 mm, the white gold case is still thinner than that of the basic Lange 1, despite having the additional moon phase complication. The tripartite case construction has a brushed middle between the polished bezel and back, further accentuating its thinness. 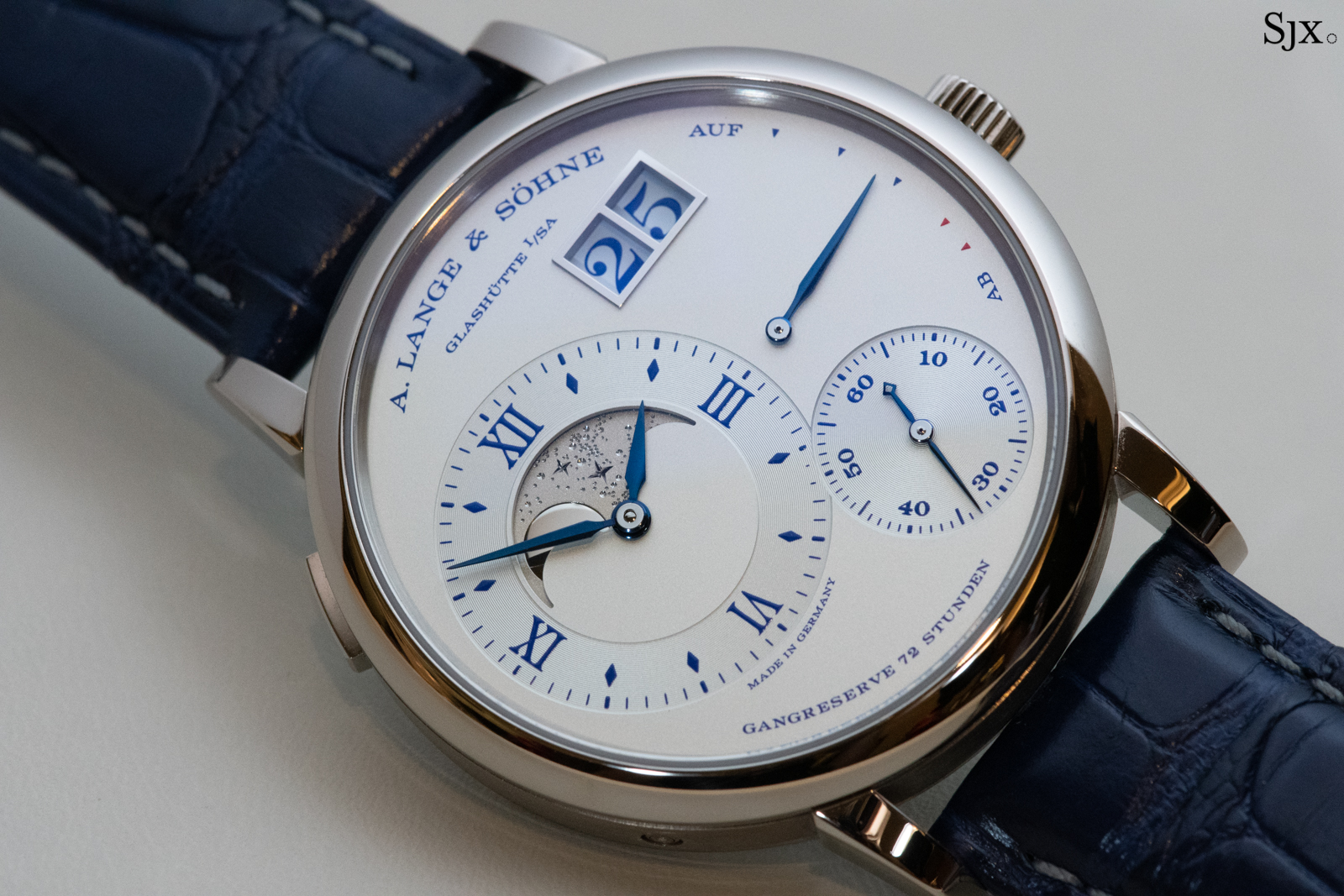 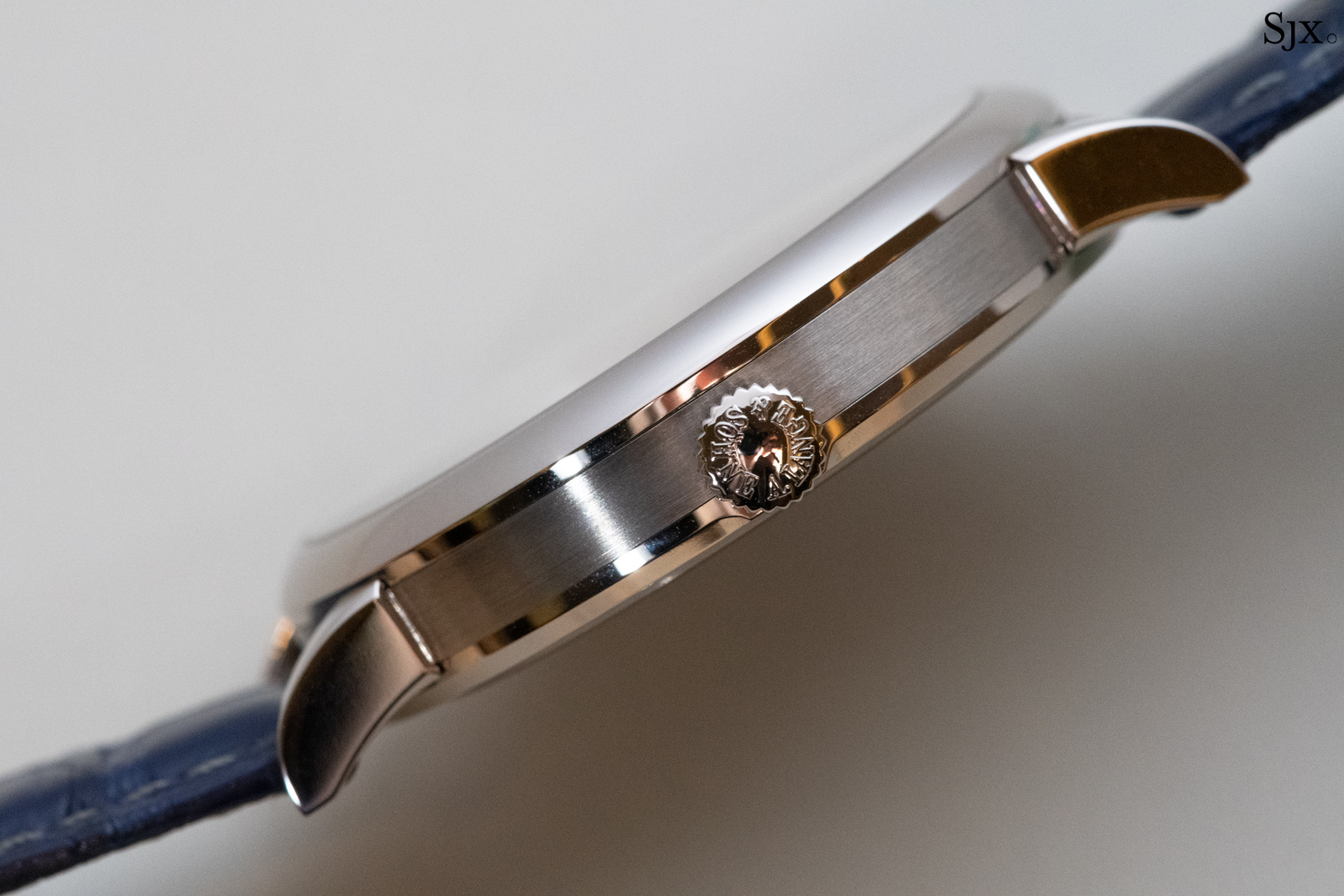 Its elegant aesthetics are enhanced by the colour palette. In keeping with the theme of the 25th anniversary series, the watch has printed blue markings on a silver dial, giving it a graceful, elegant feel. Even the Roman numerals and hour indices are printed – an unusual feature on a Lange 1 as the ordinary models have applied gold indices instead. 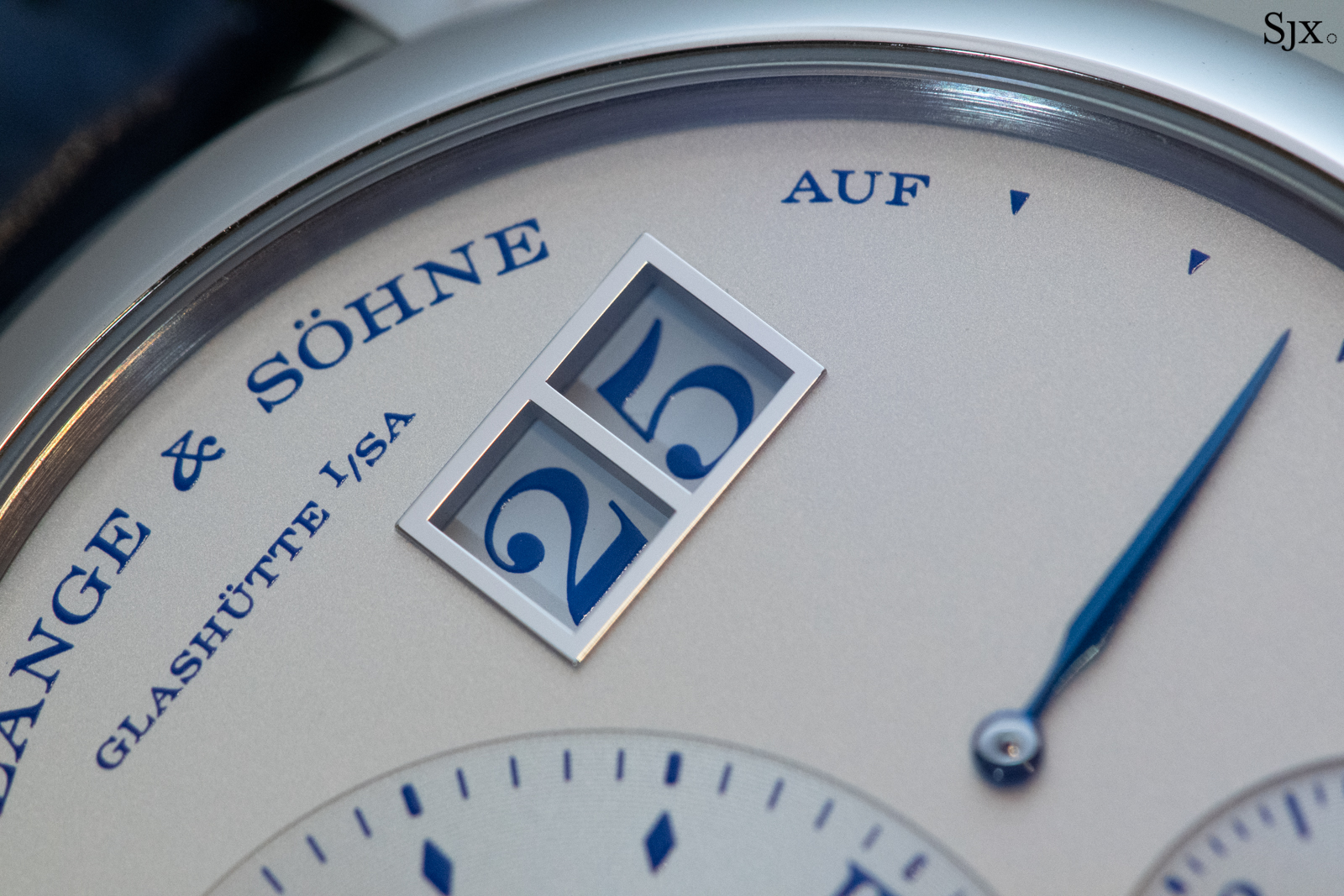 But unlike several other 25th anniversary editions that feature multi-level, two-tone dials, the Grand Lange 1 Moon Phase is simpler. It does without the frosted recesses and instead has pretty much the standard grained silver finish, with fine concentric guilloche, or azurage, on the sub-dials. 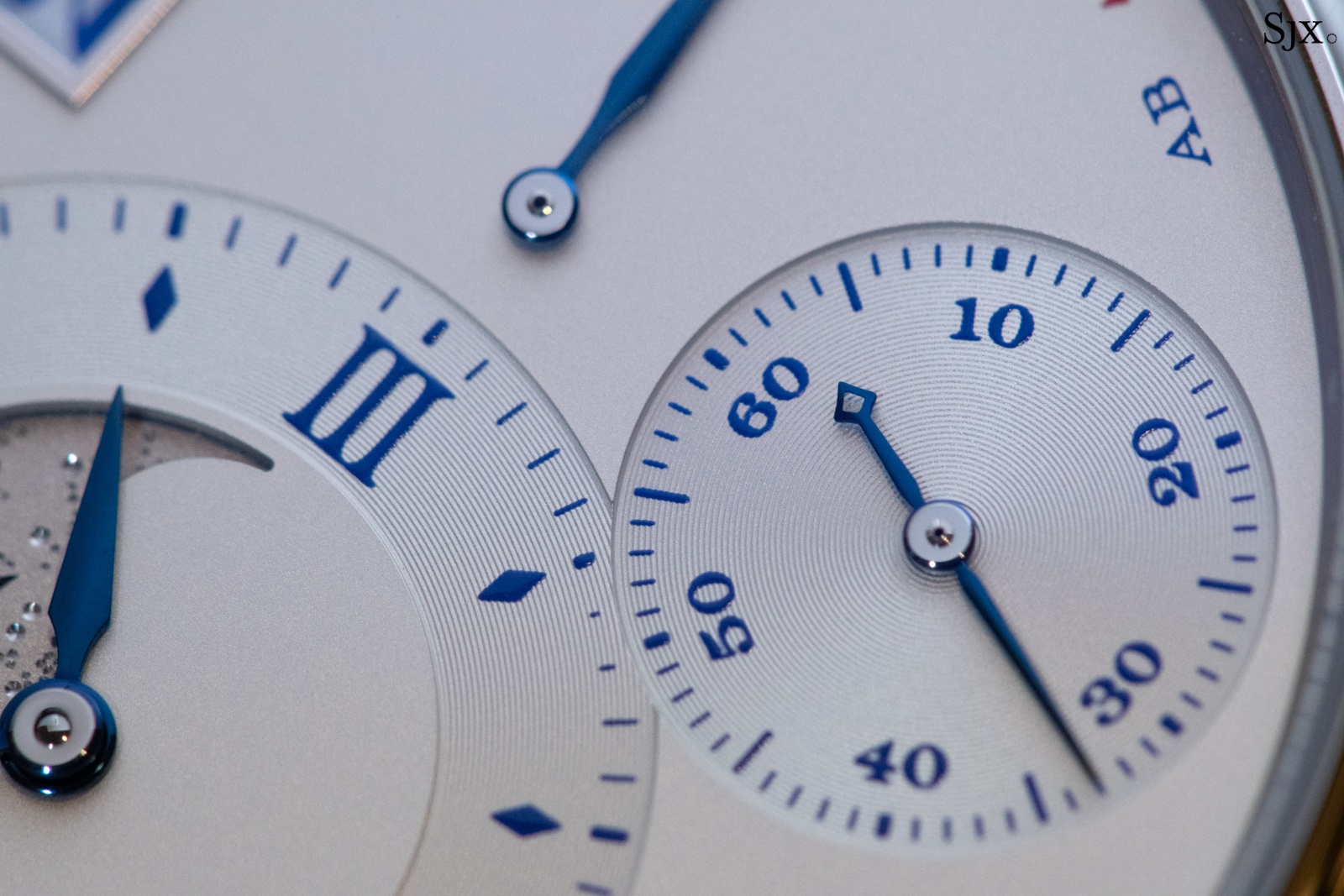 The azurage on the sub-dials

Otherwise, the Anniversary piece is nearly identical to the standard model – with one important difference that is the defining characteristic of the watch.

Within the time display is the glittering moon phase, rendered as a frosted, 18k white gold disc. 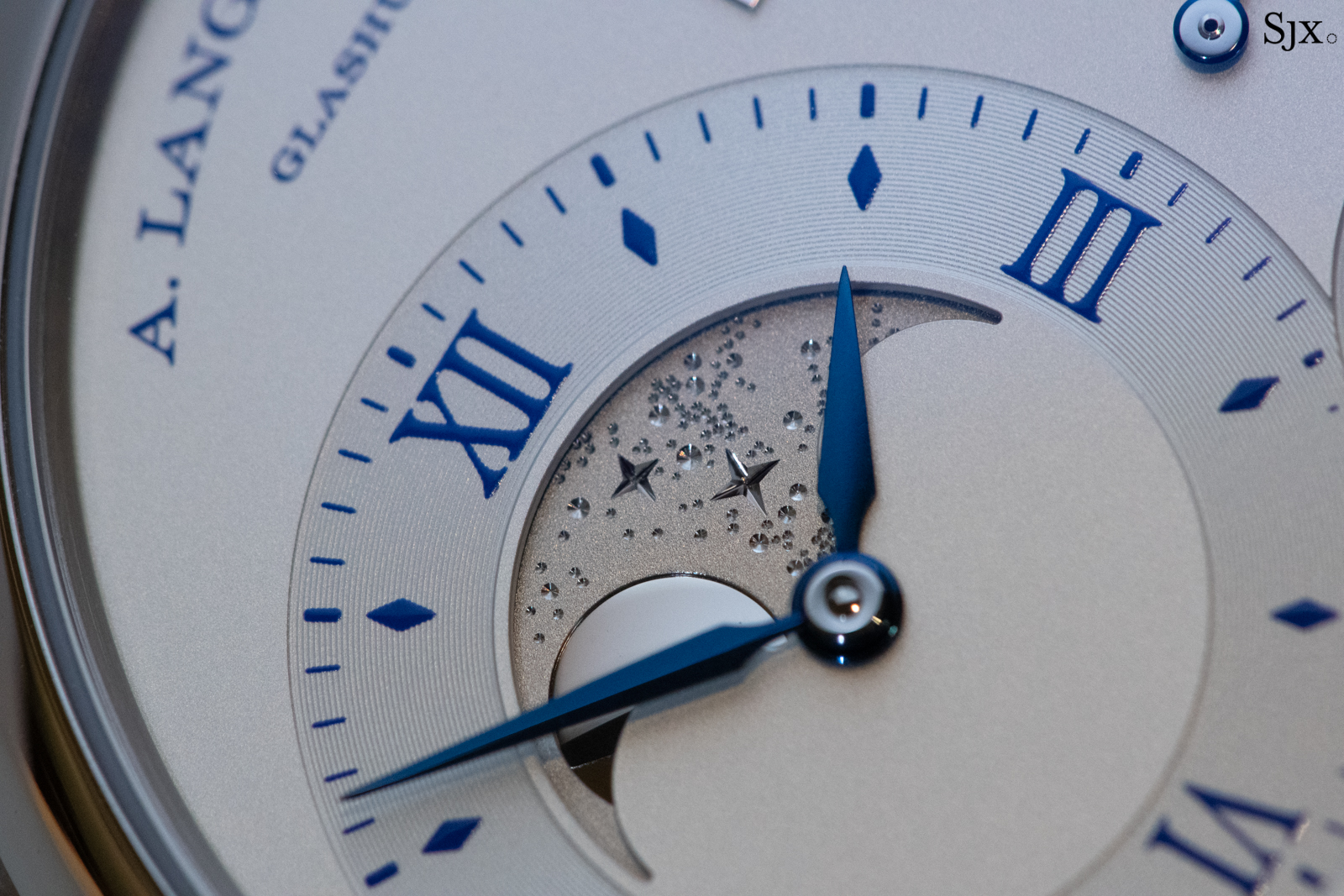 Standard Lange moon phase displays have a solid gold disc that’s been electro-plated blue, then laser etched to remove the blue layer, revealing the gold beneath and creating the stars.

The anniversary piece, however, relies on pure artisanal decoration. It’s one of the few instances where Lange’s engravers exhibit their craft on the dial of the watch, instead of on the movement.

All of the stars are engraved by hand – a burin on the frosted white gold disc. Round stars are formed by turning the burin a full 360° on a single point, while the four-pointed stars are the result of engraving a cross. The valleys of the engraving easily catch the light at different angles, allowing the moon phase disc sparkle and glint, even at arm’s length. 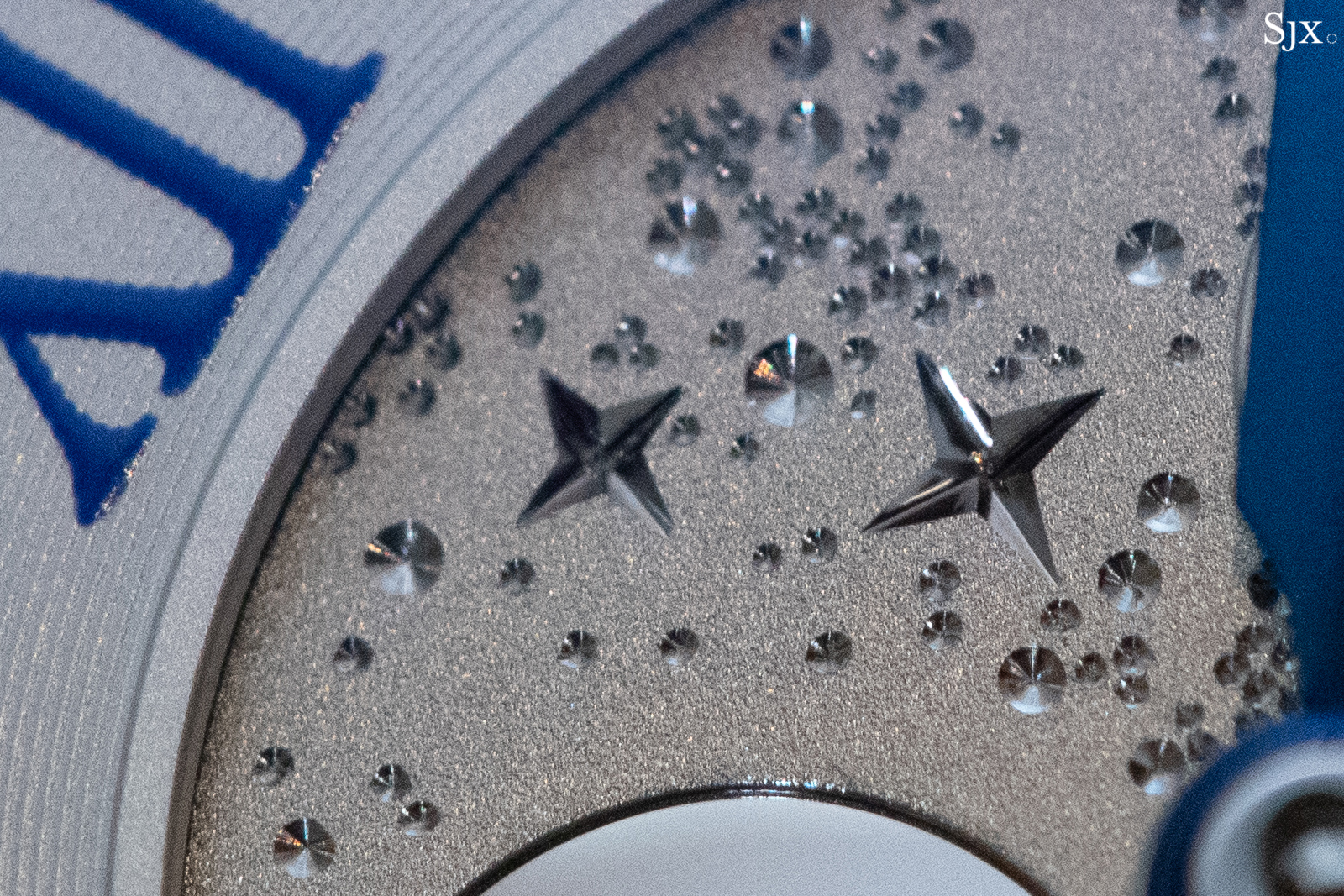 The handwork is obvious upon closer scrutiny

The Grand Lange 1 Moonphase “25th Anniversary” has standard display back – unlike the anniversary Lange 1 that had a hinged, hunter back – which reveals the L095.3 inside.

Having been derived from the first-generation Lange 1 movement, the cal. L904, the calibre retains the aesthetics of its older cousin, but on a larger canvas. Though visually similar on the back, the L095.3 was redesigned from the ground up to suit the larger case and dial, namely by positioning the pinions of the hands and date display further apart in order to retain the traditional Lange 1 layout. 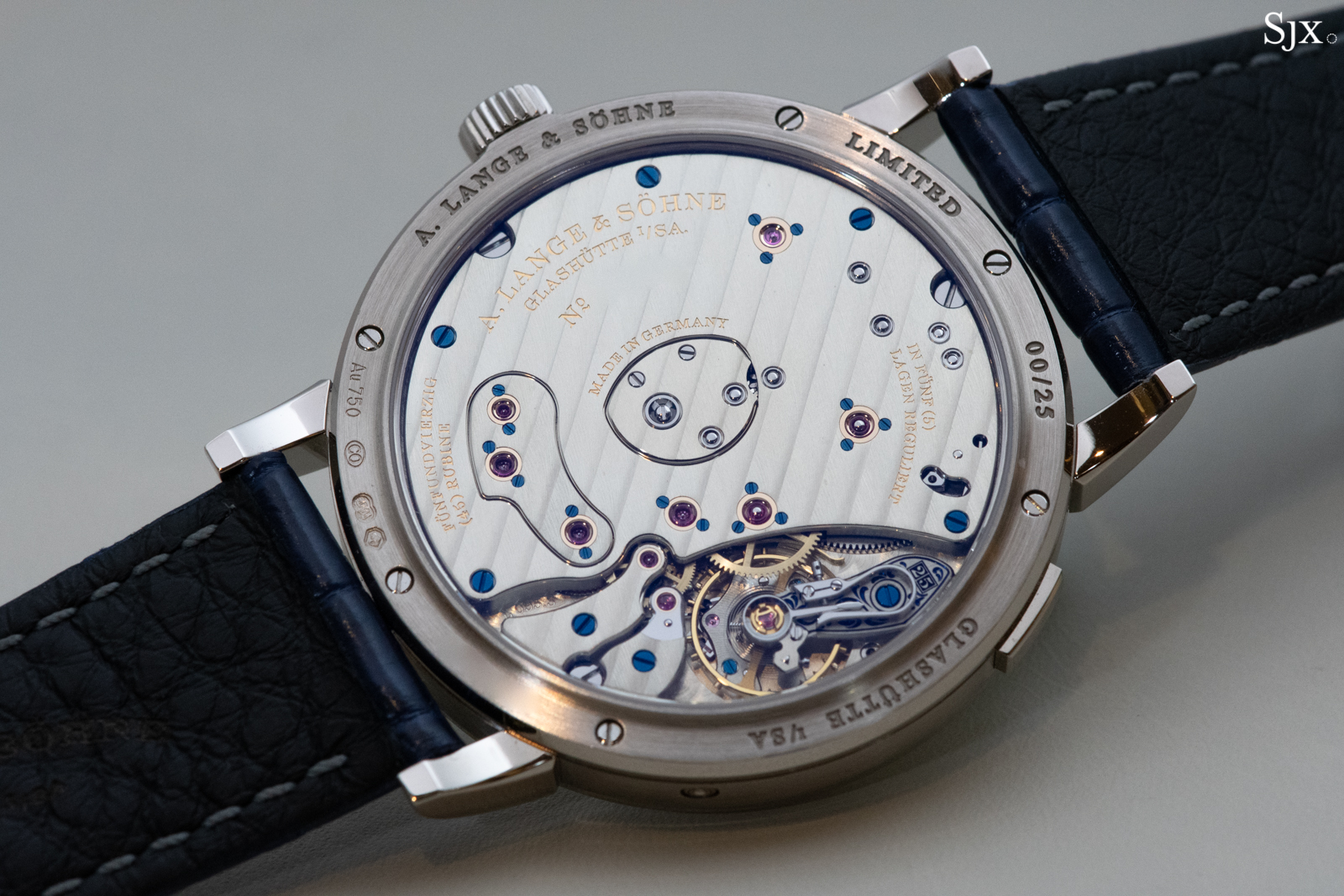 The L095.3 with a single large mainspring located at one o’clock

Besides maintaining the dial proportions, spreading out the gear train over a wider area has the benefit of making the movement thinner. In fact, the L095.3 is thinner than the standard Lange 1 movement by a whole millimetre despite the moon phase. The fact that the moon phase display was integrated into the base plate, as opposed to being built above, also keeps the height down.

Furthermore, the larger movement meant that the twin barrels of the original Lange 1 were consolidated into a single, larger barrel while still maintaining a full 72 hours of power reserve. This also means that the text on the dial at seven o’clock reads “Gangreserve 72 Stunden”, German for “72 hours of power reserve”, instead of the trademark “Doppelfederhaus,” or “double mainspring barrel”, found on the original Lange 1. 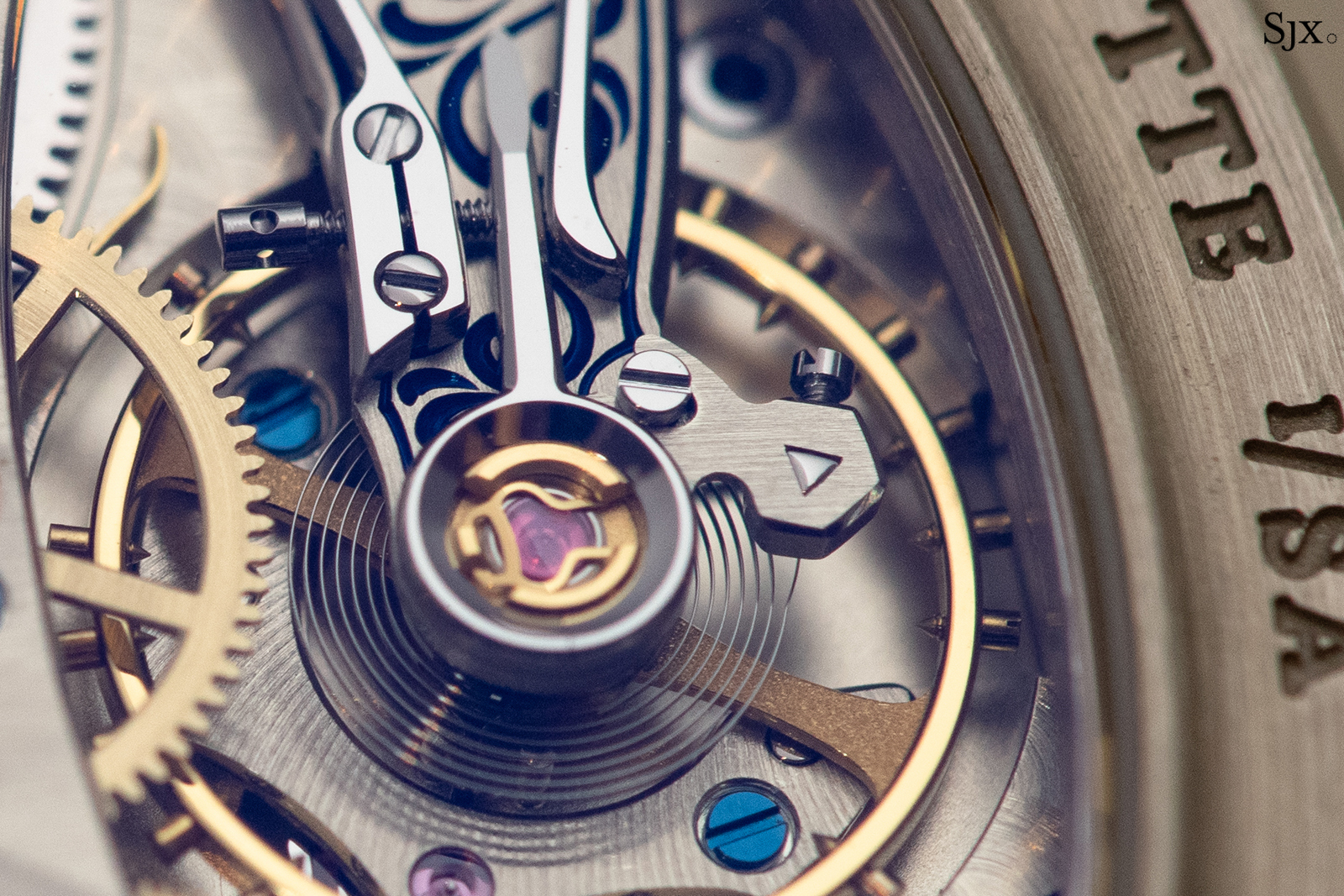 A decorative flourish found on all “25th Anniversary” watches is the balance cock bearing a commemorative motif. Instead of the floral pattern found on the standard cock, this features a “25” in framed in a big date window. And the engraving is filled with a blue coating – standard cocks are left uncoloured – that contrasts against the rhodium-plated surface of the balance cock. 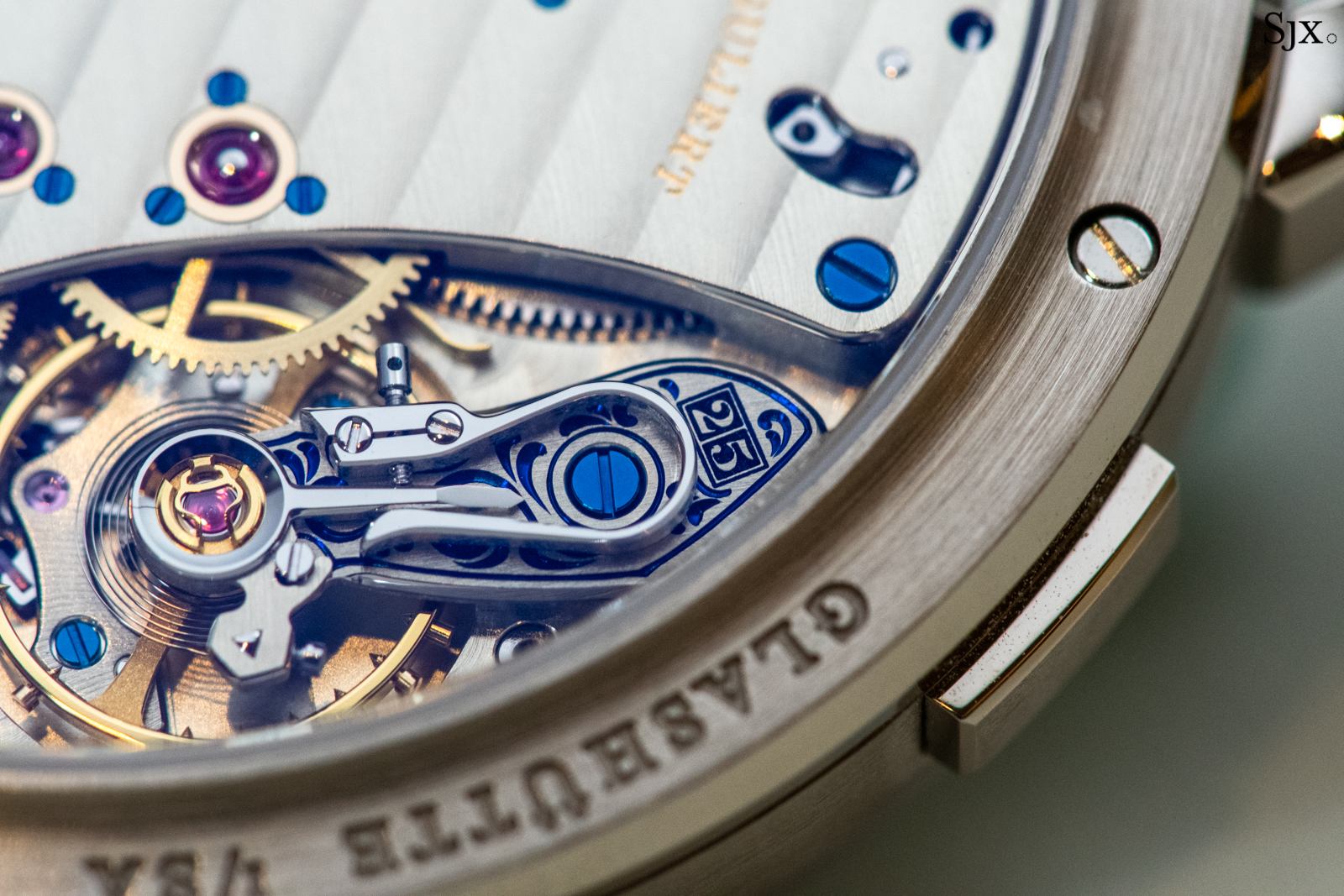 Blue-coated engraving of the balance cock.

The rest of the movement is identical to that found in the standard Grand Lange 1 Moon Phase. By extension, that also means the finishing to the usual high standard of Lange: striped on the German silver three-quarter plate, gold chatons for ruby bearings, and polished anglage all around the visible bridge edges.

While the movement may look dated – especially when put next to the current generation Lange 1 calibre – it has its own particular aesthetic appeal, most notably with the signature “island” bridges found only on first-generation Lange 1 movements.

The pair of “islands” can be removed individually, allowing a watchmaker to access to the keyless works and the off-centre seconds, without having to remove the entire three-quarter plate. And they also require more anglage, since bevelling has to be done along the outline of the “island” bridges as well as the inner edges of the three-quarter plate that contains them. 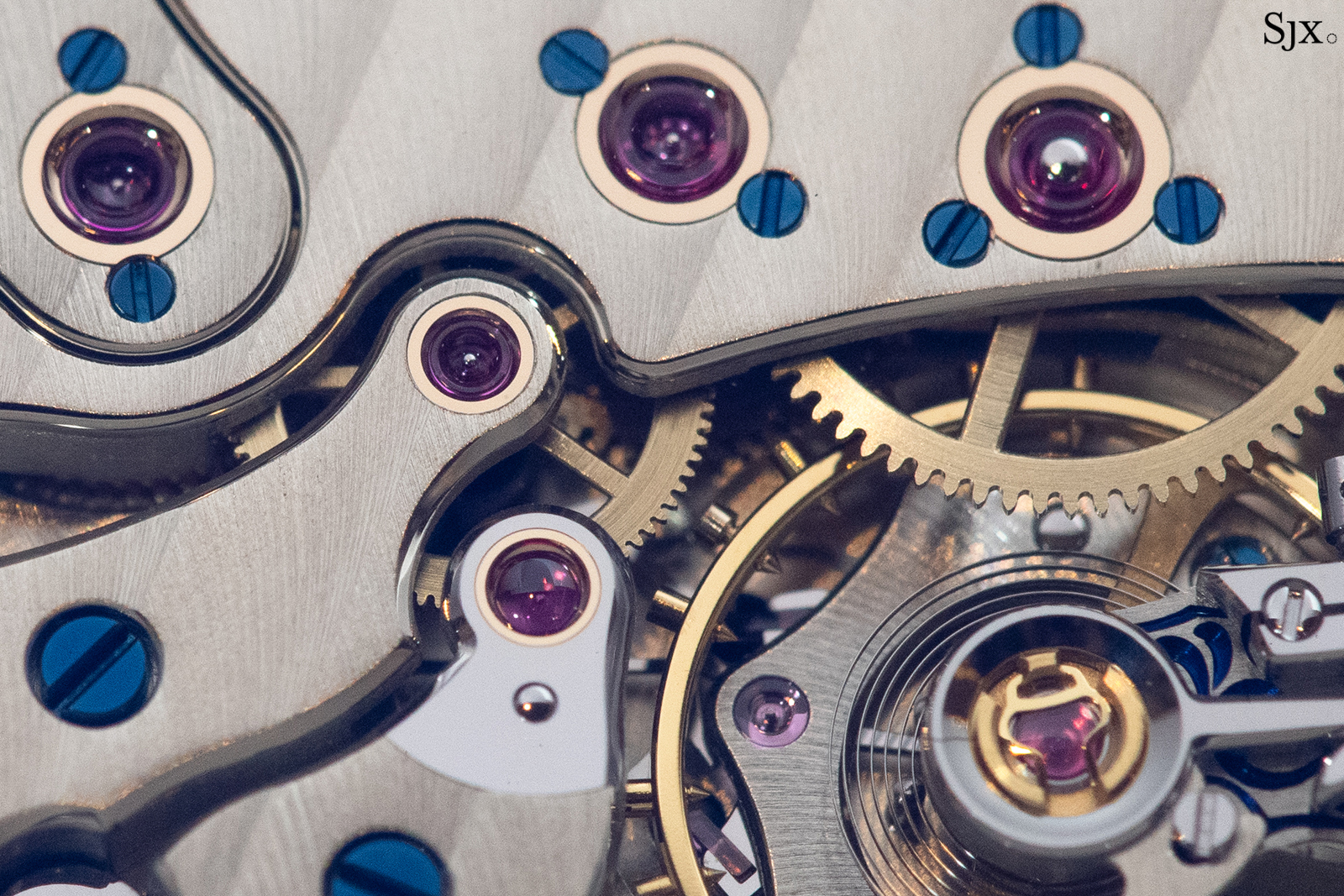 Closeup of the uniform and fine anglage 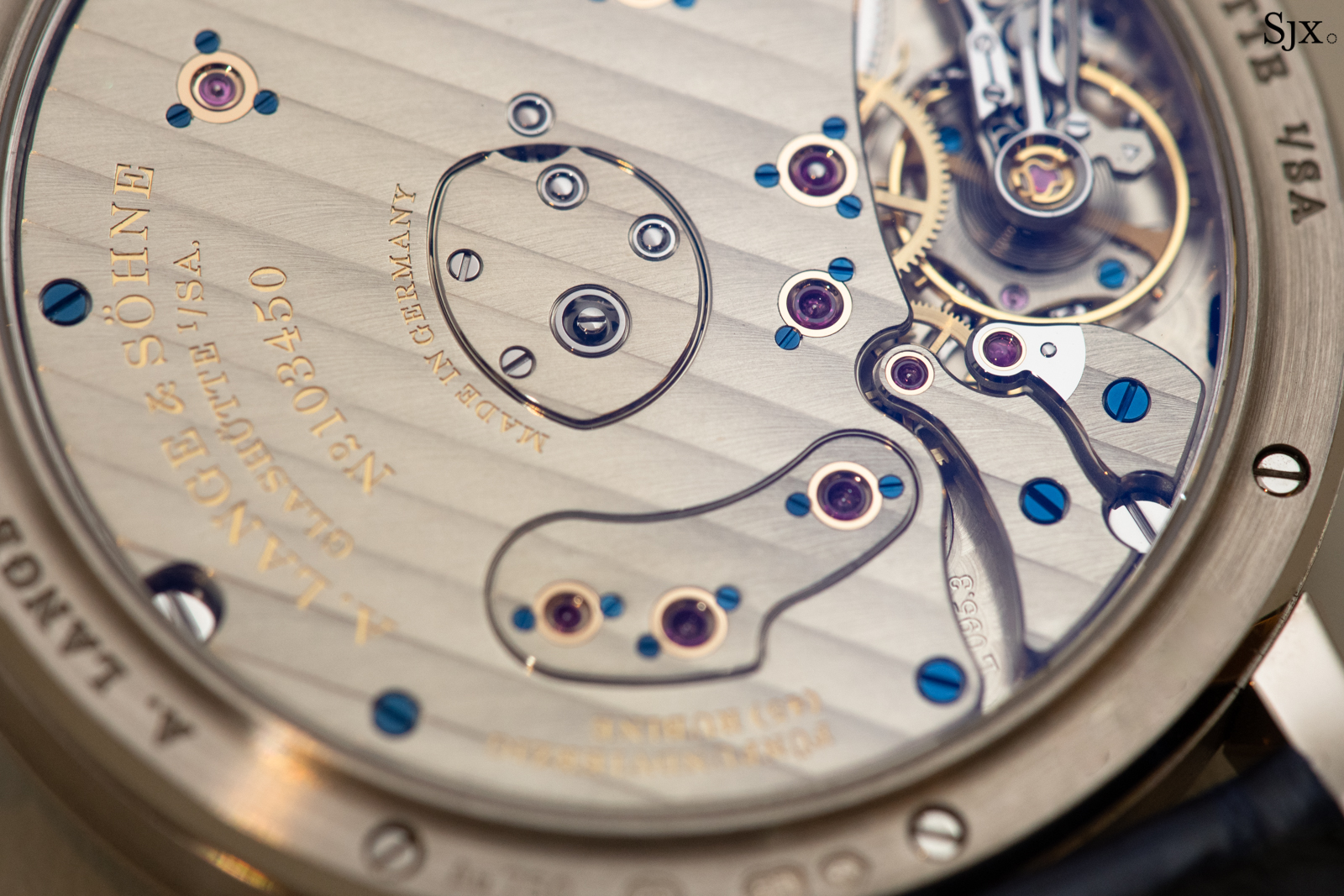 For approximately €2000 over the equivalent standard model in rose gold – which works out to a 5% premium – the anniversary edition is well worth the modest extra outlay, bringing with it the hand-engraved moon phase, and the novelty of very-limited edition.

Put another way, the price increment is a modest for an easily observable and beautiful feature. By comparison, the steeper premium for the Lange 1 “25th Anniversary” pays for an finely-made hunter back that is costly in execution and materials but not visible decorative. 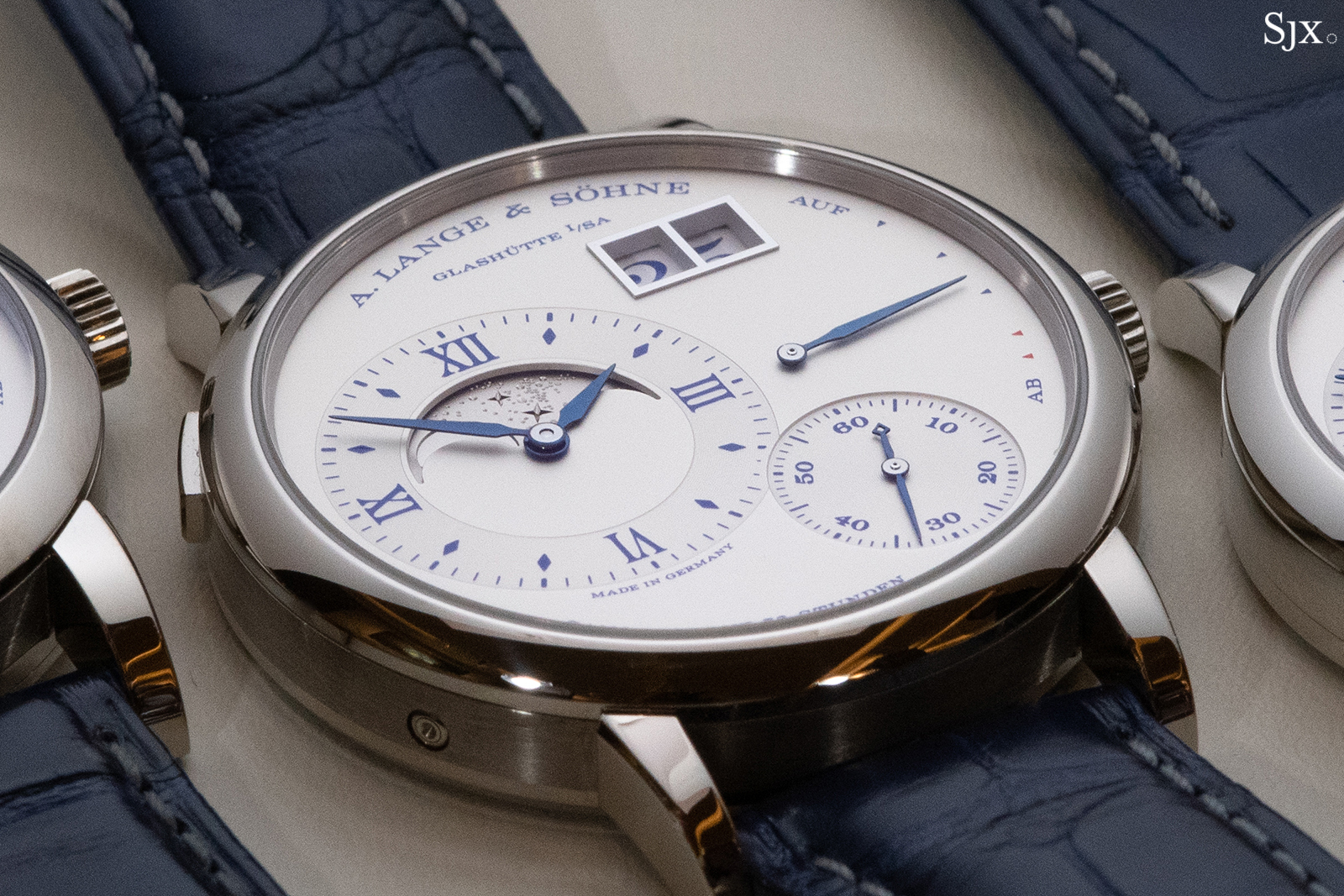 And it is also worth a comparison to the 38.5 mm Lange 1 Moon Phase “25th Anniversary”. Though clad in the same blue-and-silver livery, the smaller moon phase lacks a hand-engraved moon disc due to the construction of its moon phase display.

Though the smaller model is boosted by its second-generation Lange 1 movement – and the 38.5 mm case is more appealing to classically-inclined or traditionalist collectors – the hand-engraved moon phase on the Grand Lange 1 is more compelling.