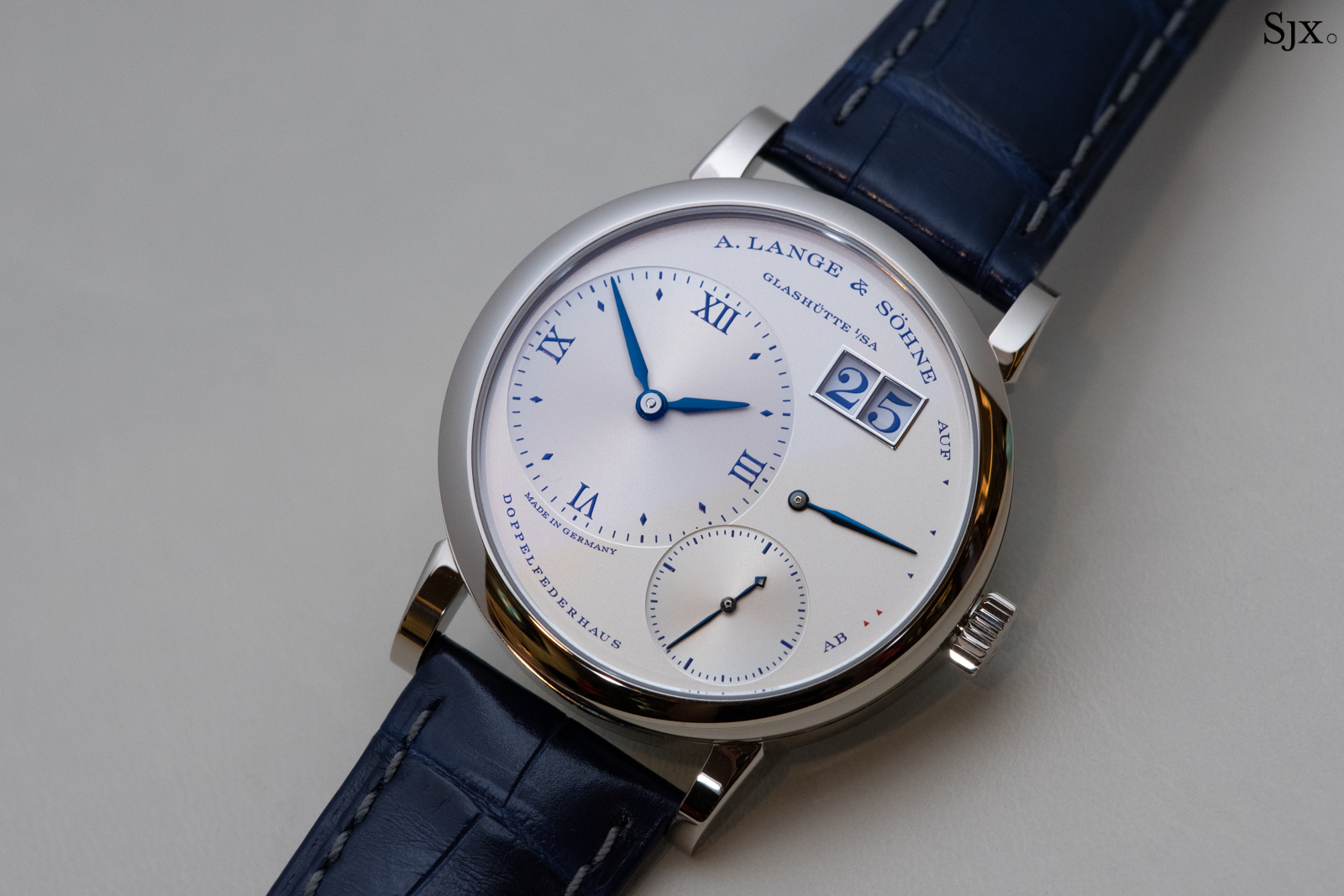 A. Lange & Söhne is marking the 25th year since it first unveiled its modern line-up of wristwatches – led by the iconic Lange 1 – in 1994 with a 10-piece set of special Lange 1 models. The Little Lange 1 “25th Anniversary” is the third watch of the set, which has been progressively unveiled each month, with the last (presumably a Lange 1 Tourbillon) slated to be announced in October.

The Little Lange 1 was first conceived in 1998 as a scaled down version of the Lange 1, with the case shrunk to 36mm. But it was originally a men’s watch, catered to markers like Japan and Singapore that wanted a smaller size.

So the earlier versions had plain dials, essentially the same dials as found on the full-size Lange 1, but the Little Lange 1 has since evolved into a watch for ladies, so the current versions are only offered with ornate guilloche dials in purple or brown, with the option of a diamond-set bezel.

But the Little Lange 1 “25th Anniversary” returns to the original concept of the model, with all frills removed and once again suitable for men. 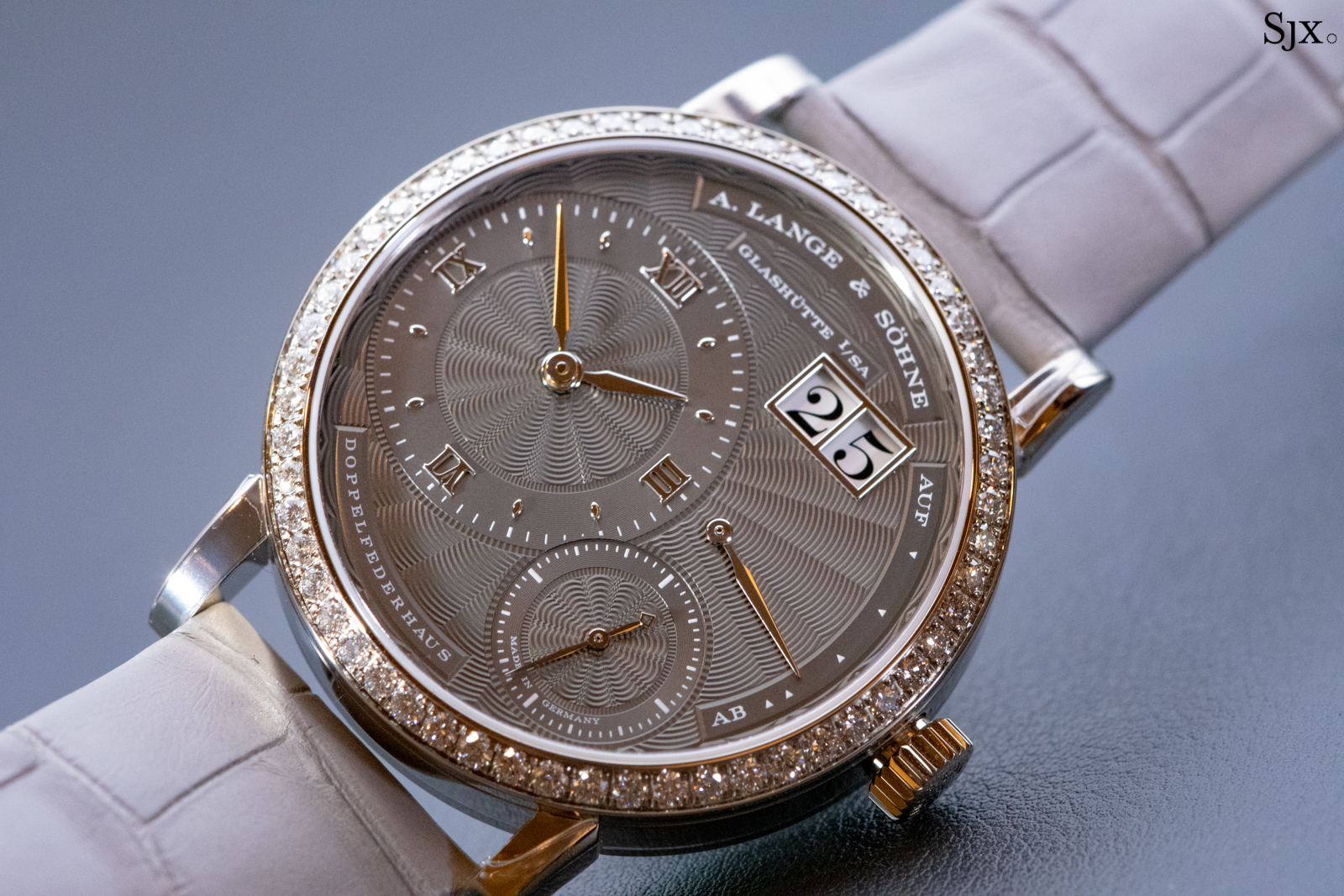 The standard Little Lange 1 with a brown guilloche dial

The “25th Anniversary” model of the Little Lange 1 pays tribute to the original design with a standard silver dial. In fact, the dial is identical to first generation Little Lange 1 dials, with the exception of the colours and printed indices; the originals had applied markers. As a recurring theme found in the other commemorative pieces, the dial markings are printed in blue instead of the standard black – including the Roman numerals and hour markers. 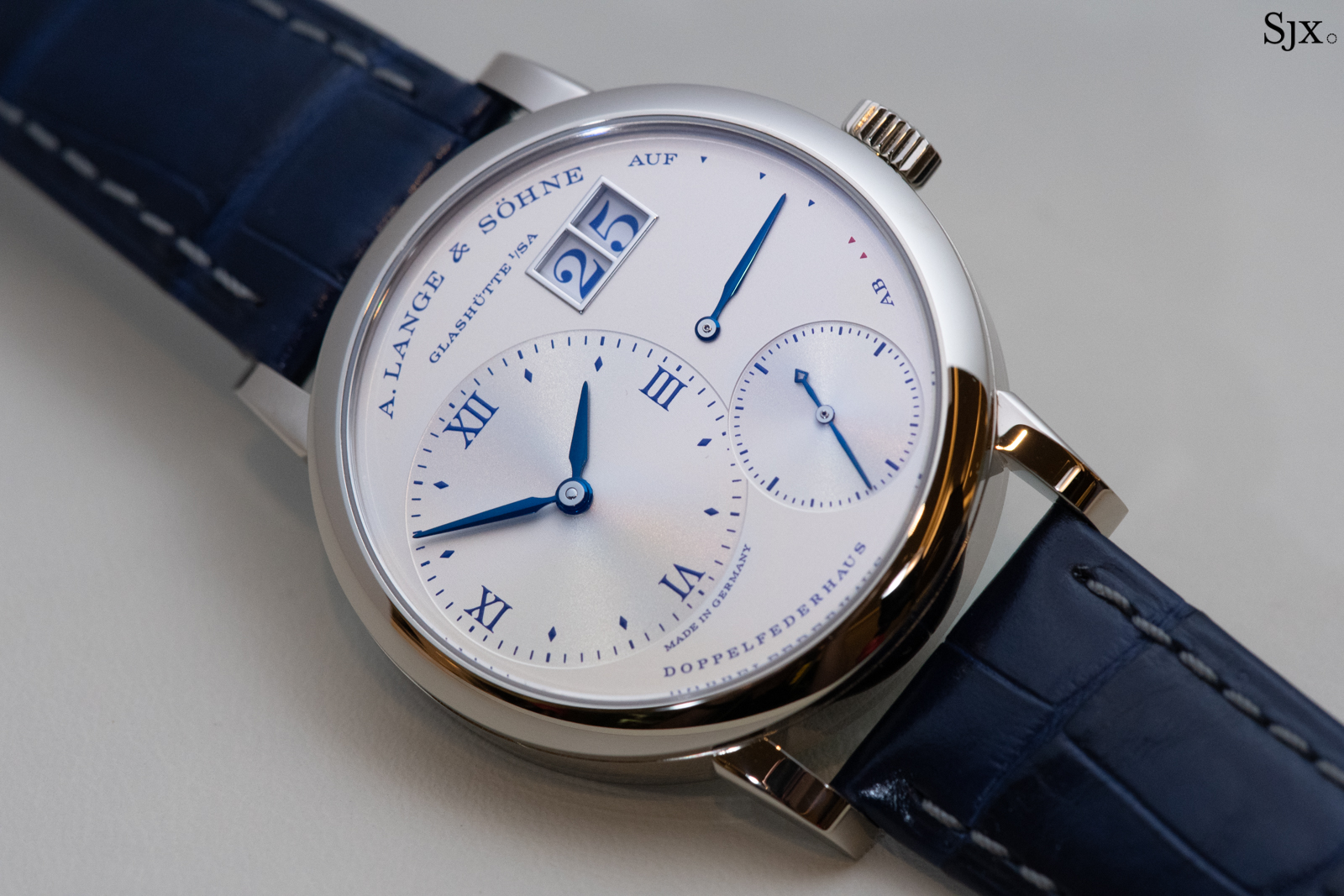 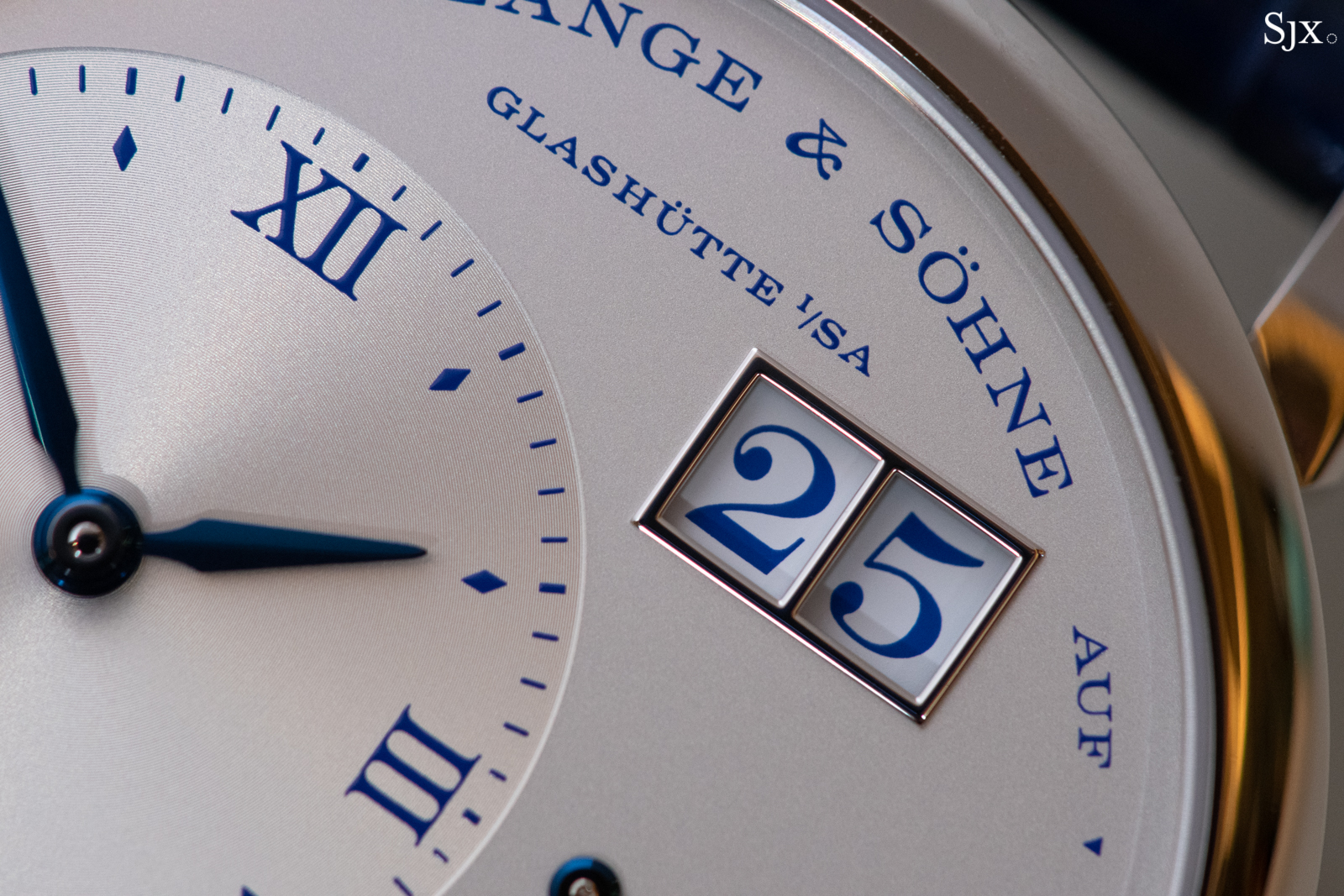 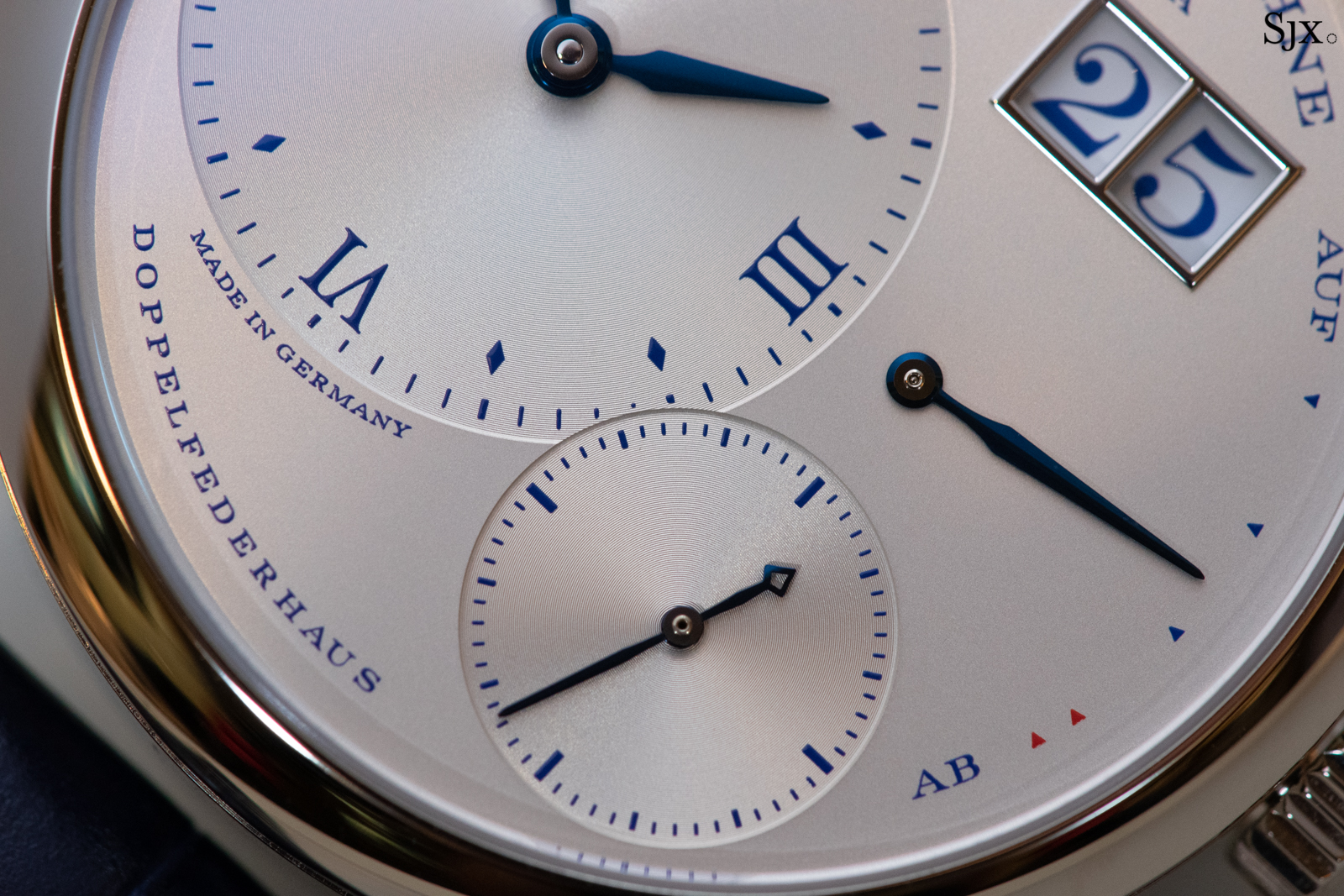 Measuring a diminutive 36.8mm, the white gold case has a tripartite construction – bezel, middle and back – and is 9.5mm thick. In comparison, the regular Lange 1 is 38.5mm in diameter and 9.8mm high. The smaller size of the Little Lange 1 is further emphasized by the date corrector being a recessed pusher instead of the standard button, which streamlines the case sides.

Also, the Little Lange 1 has the case middle polished – an exception rather than the norm, as Lange’s current watches all have brushed case bands. Until a few years ago, only the rose gold cases in Lange’s regular production watches have polished middle sections, though those eventually transitioned to brushed sides as well, making polished case bands an unusual feature. The case thus feels more like a piece of jewelry, and is less muted in appearance with its reflective surfaces. 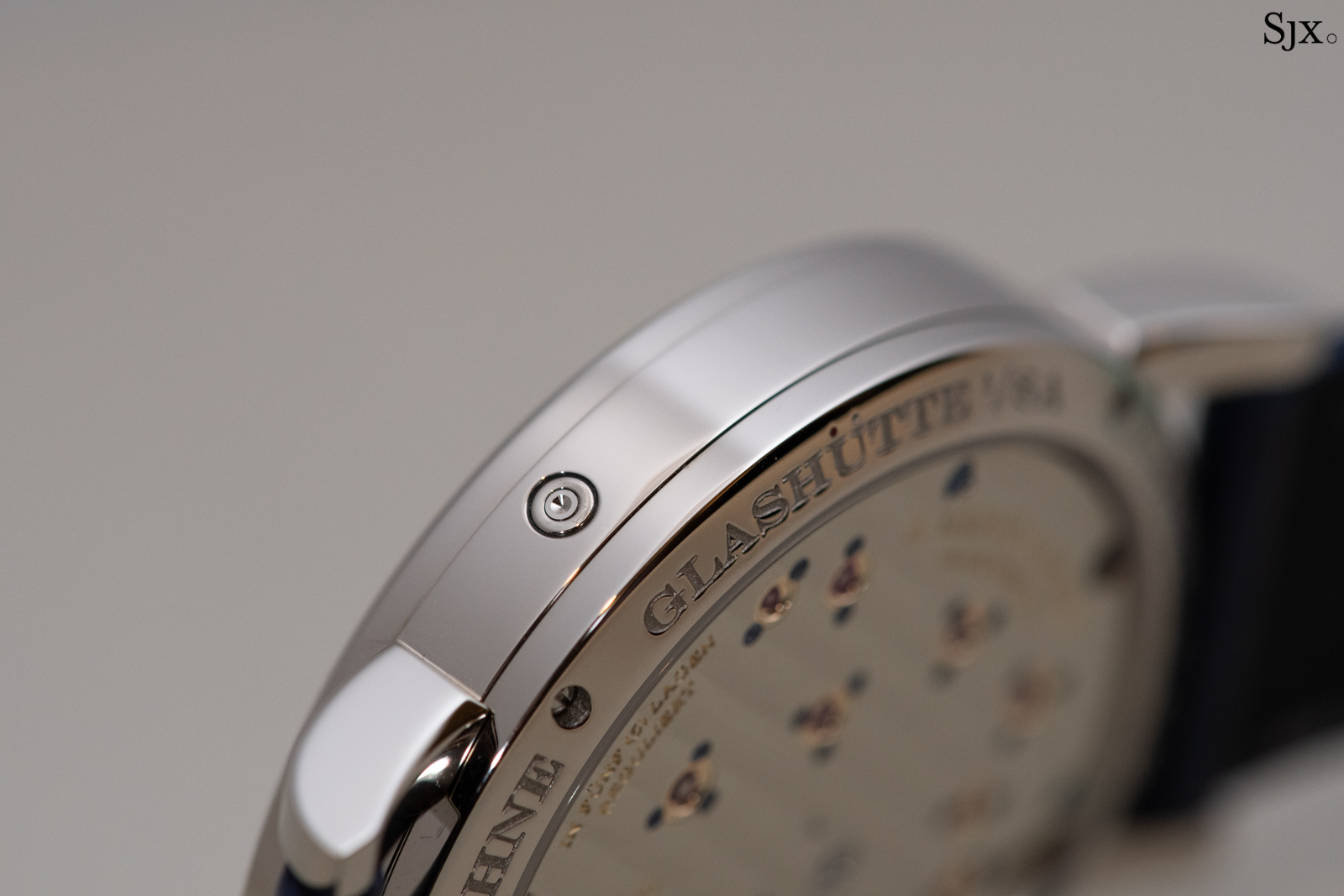 Recessed pusher for the big date

Meanwhile, the reverse side is more typical. Inside is the Lange cal. L121.1, introduced in 2015 as the second generation Lange 1 movement. It was redesigned as a technical upgrade to the original movement, while retaining the classic Lange 1 dial layout exactly. The most notable added feature being the instantaneous jumping date around midnight, while still maintaining its power reserve of 72 hours. 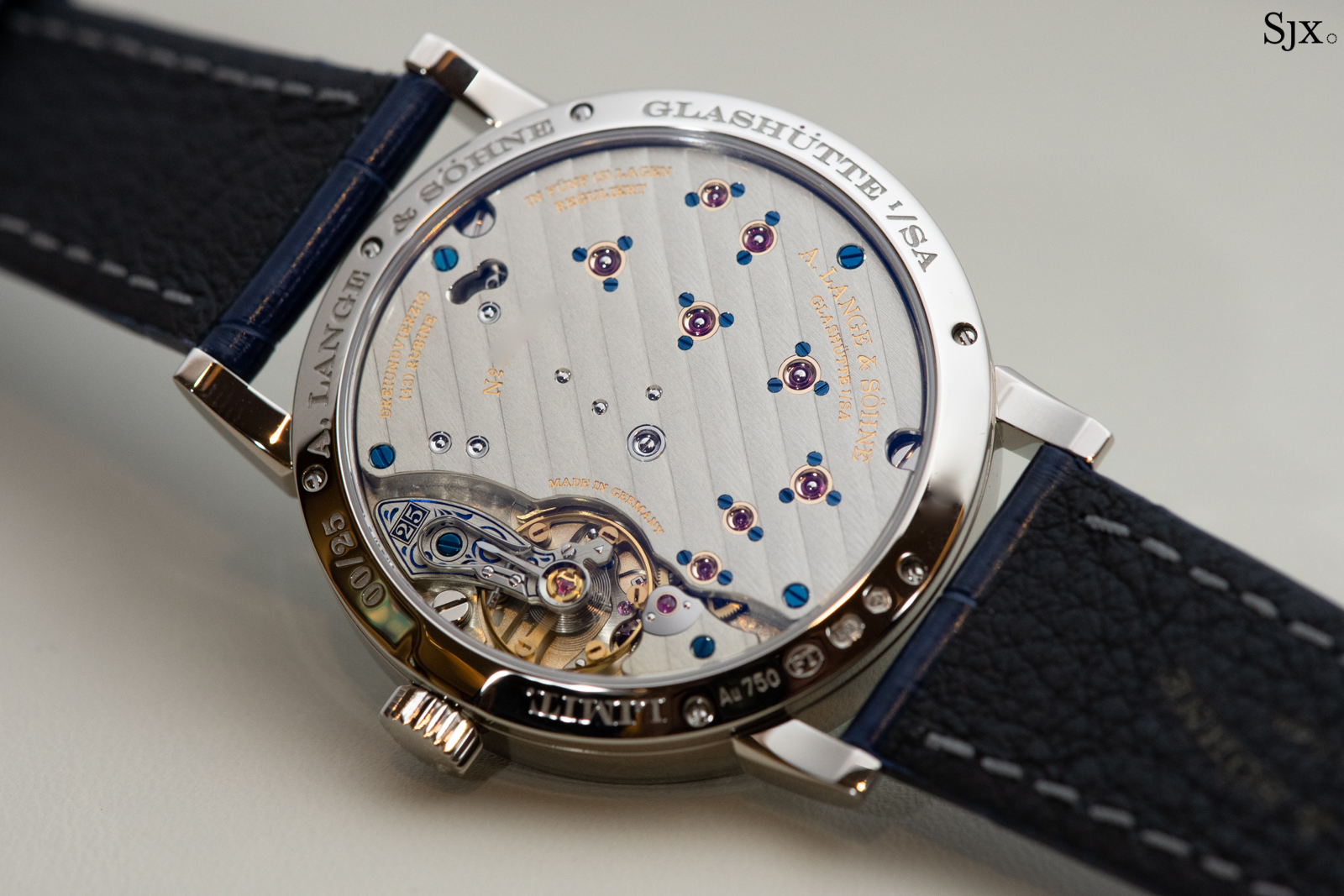 Also, a free-sprung balance wheel was integrated, curiously located right next to the crown – this was done out of necessity to create a more efficient gear train by aligning the pivots with the position of the seconds hand on the dial. 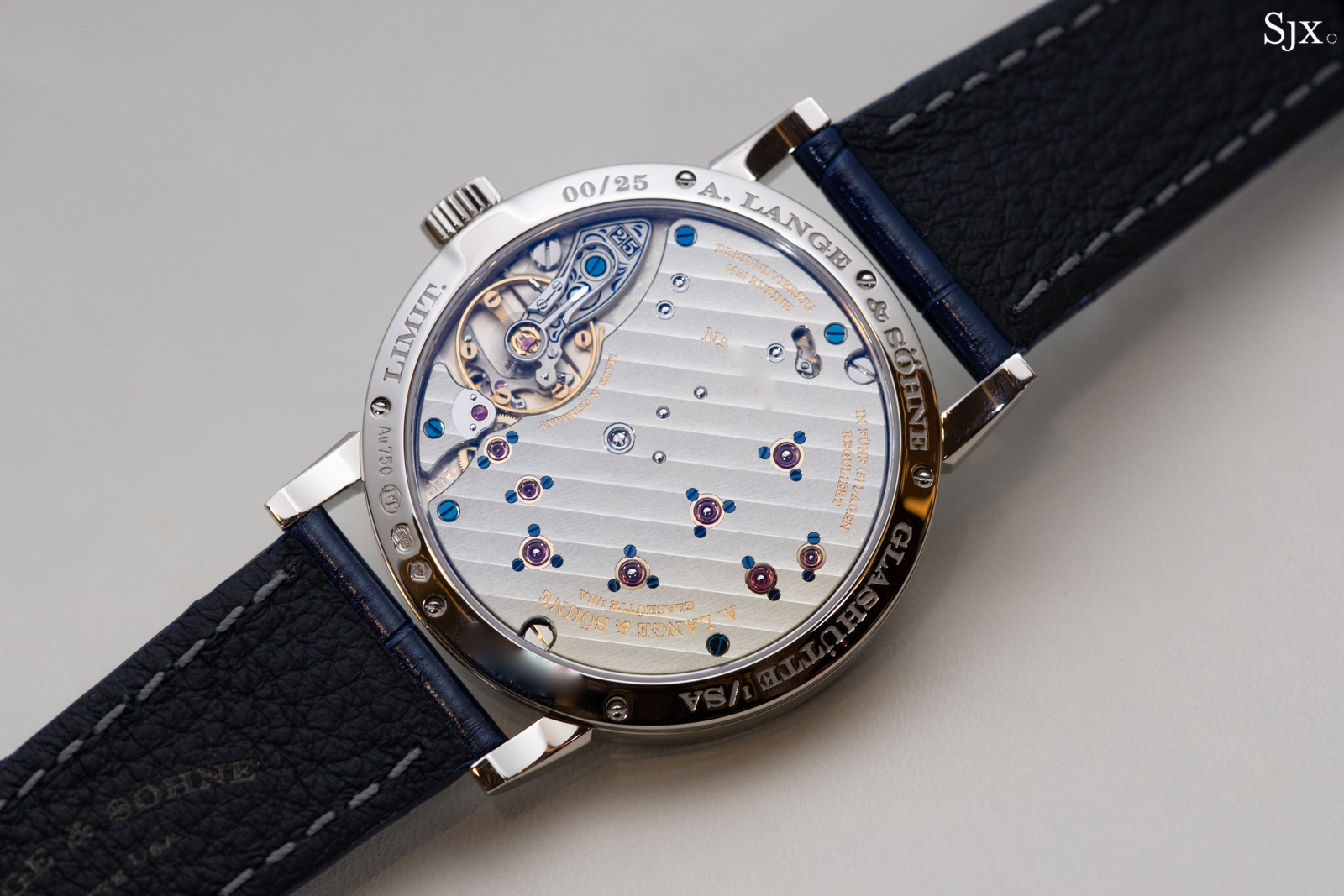 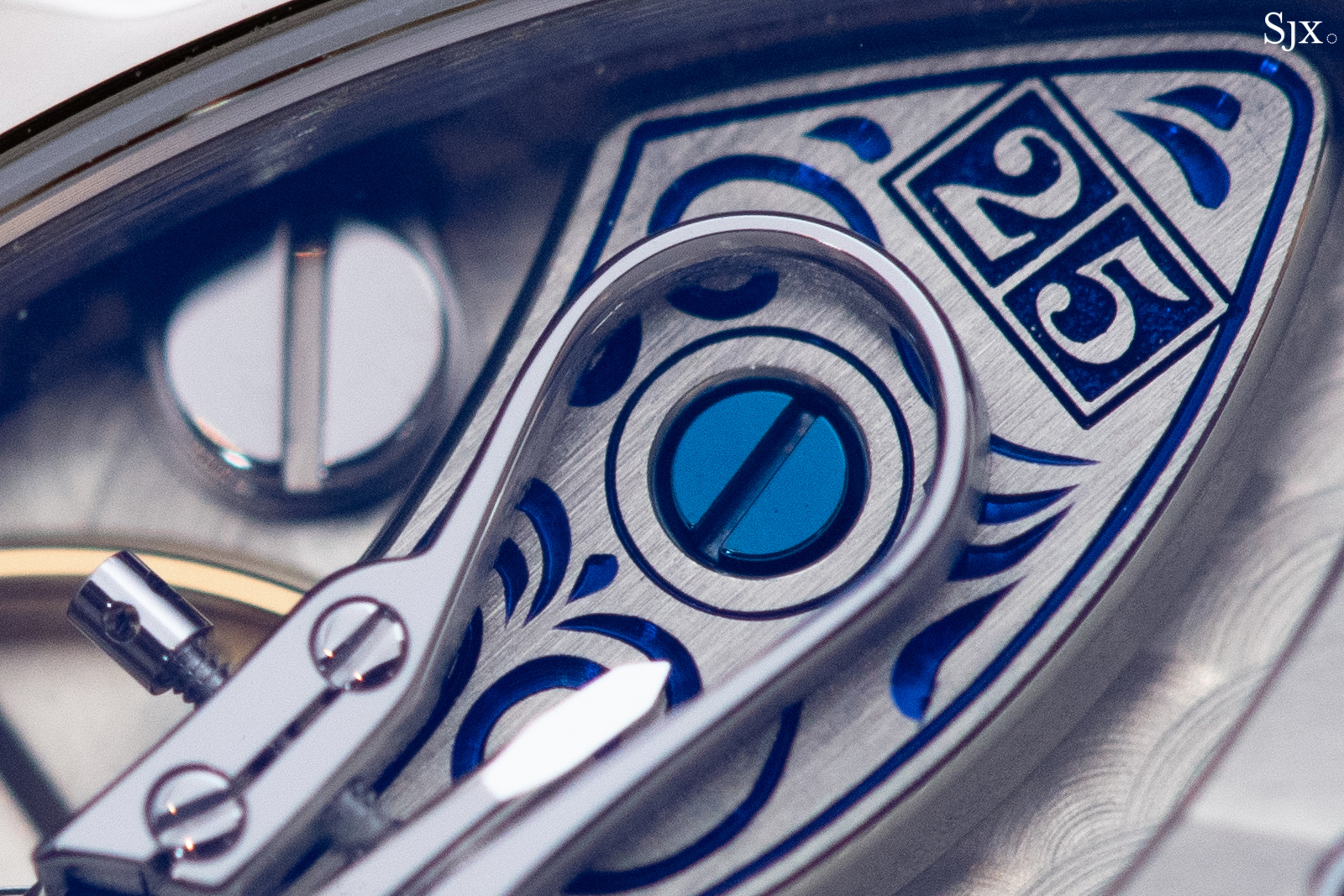 The rest of the movement is identical to the L121.1 in regular production models. As typically associated with German watchmaking, majority of the movement view is of the three-quarter plate made of German silver, or maillechort, with gold chatons for the ruby bearings. Meanwhile, the escapement wheel is supported by a black-polished steel cap as a finishing touch.

As typical with Lange movements, the finishing is superb overall. However, in comparison to the first generation Lange 1 movement that had “island” bridges on the three-quarter plate (for easier access to the wheel train below), the modern L121.1 may appear a little too plain as the plate is an unbroken mass, but that’s just a personal nitpick.

And though identical to the movement in the larger Lange 1, the movement is arguably presented better in the Little Lange 1 than its larger brother, as the calibre fills up the case back much more, reducing the back to the bare minimum. 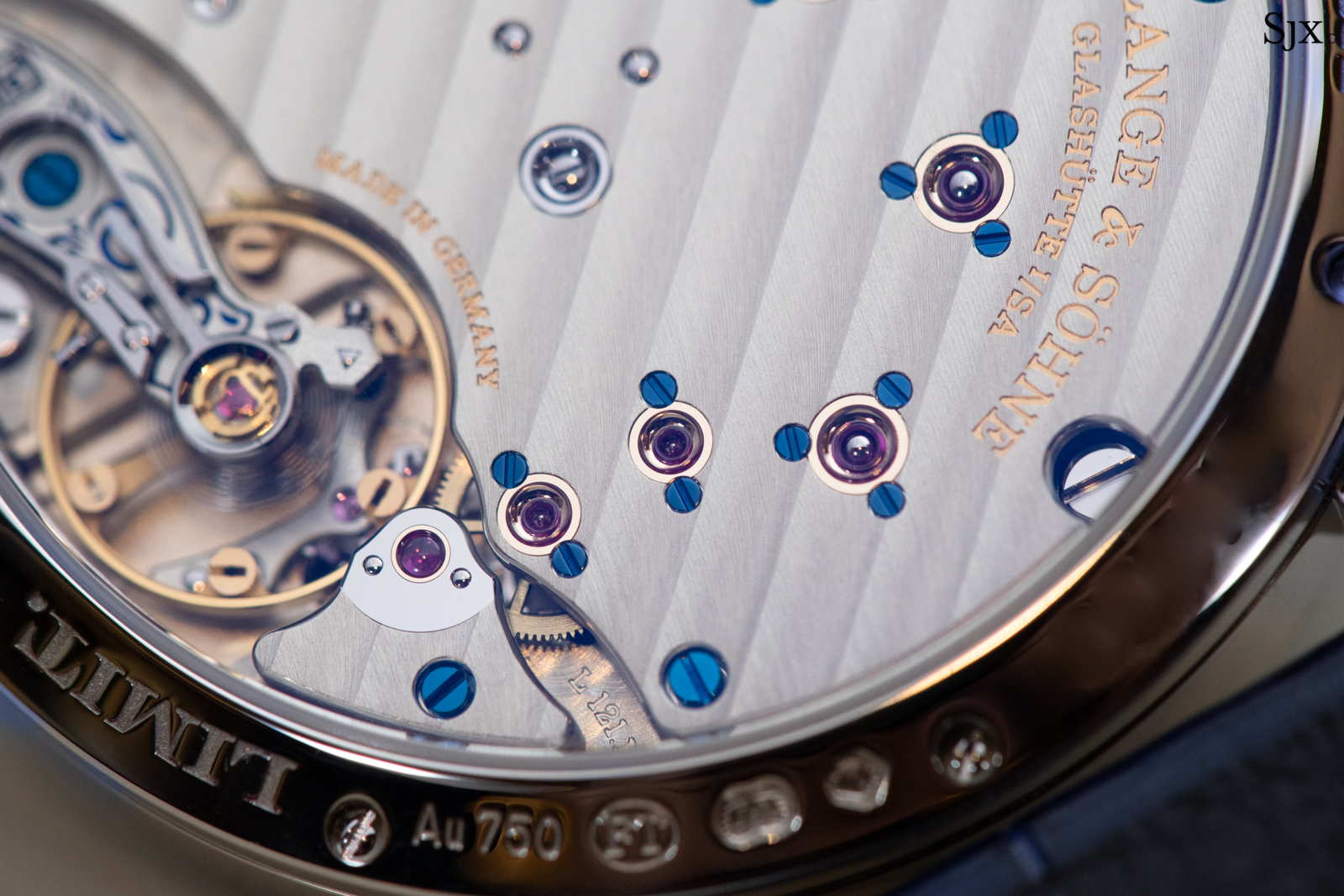 Gold chatons, and a polished steel cap for the escape wheel 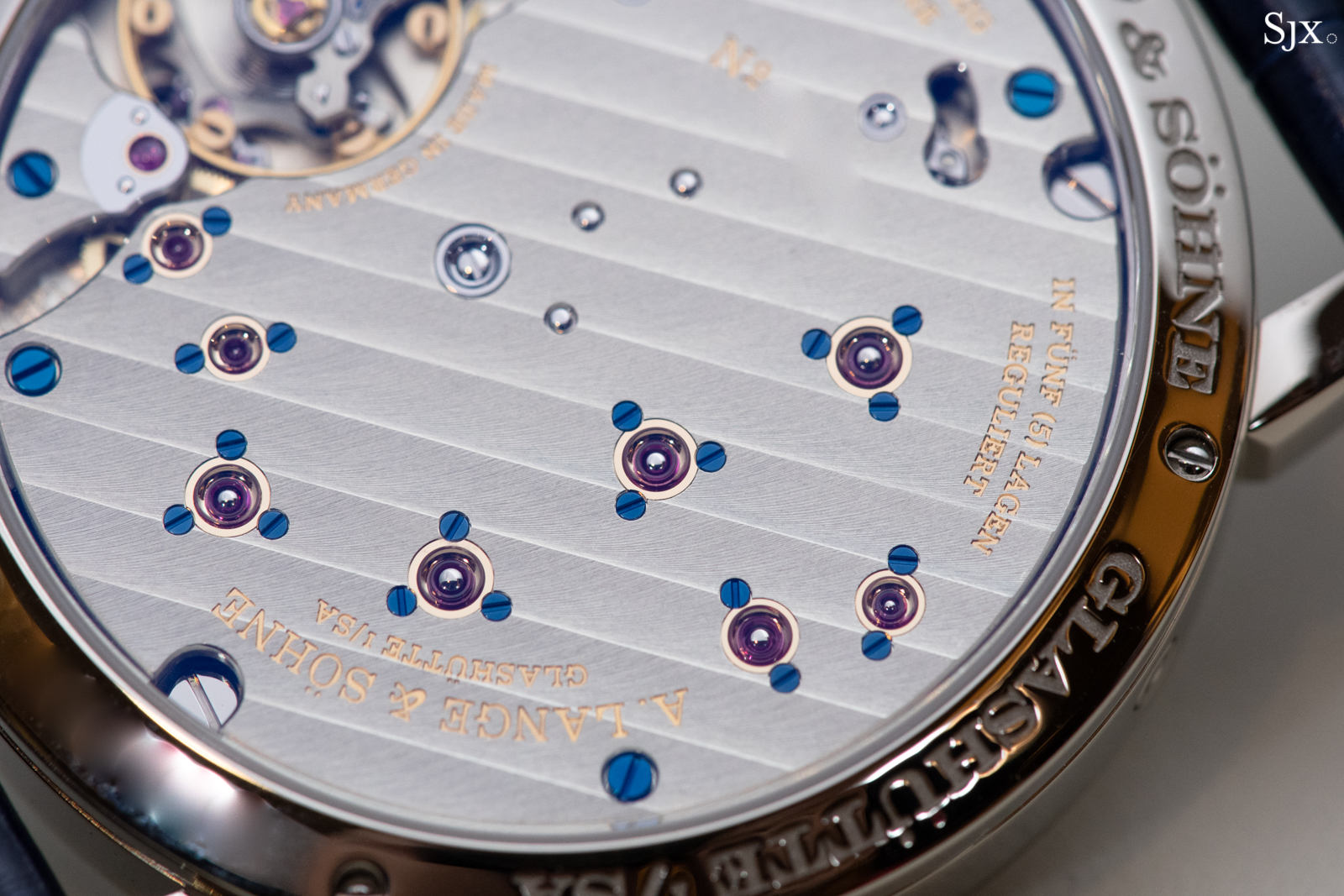 The gold chatons trace out the movement going train, while the polished steel shafts in the middle are for the keyless works

The price of simplicity

In comparison with the two earlier “25th Anniversary” releases – the Lange 1 with a hunter back and the Grand Lange 1 Moon Phase – the Little Lange 1 offers the least flourishes over the regular production model.

This also means that value-wise, it has a smaller premium over a regular Lange 1, in short it’s a special execution of a classic for not much more. Anyone looking for a modestly-sized case and straightforward dial with an alternative blue colour scheme would find the Little Lange 1 ideal. Be quick, however, as only 25 pieces have been produced. 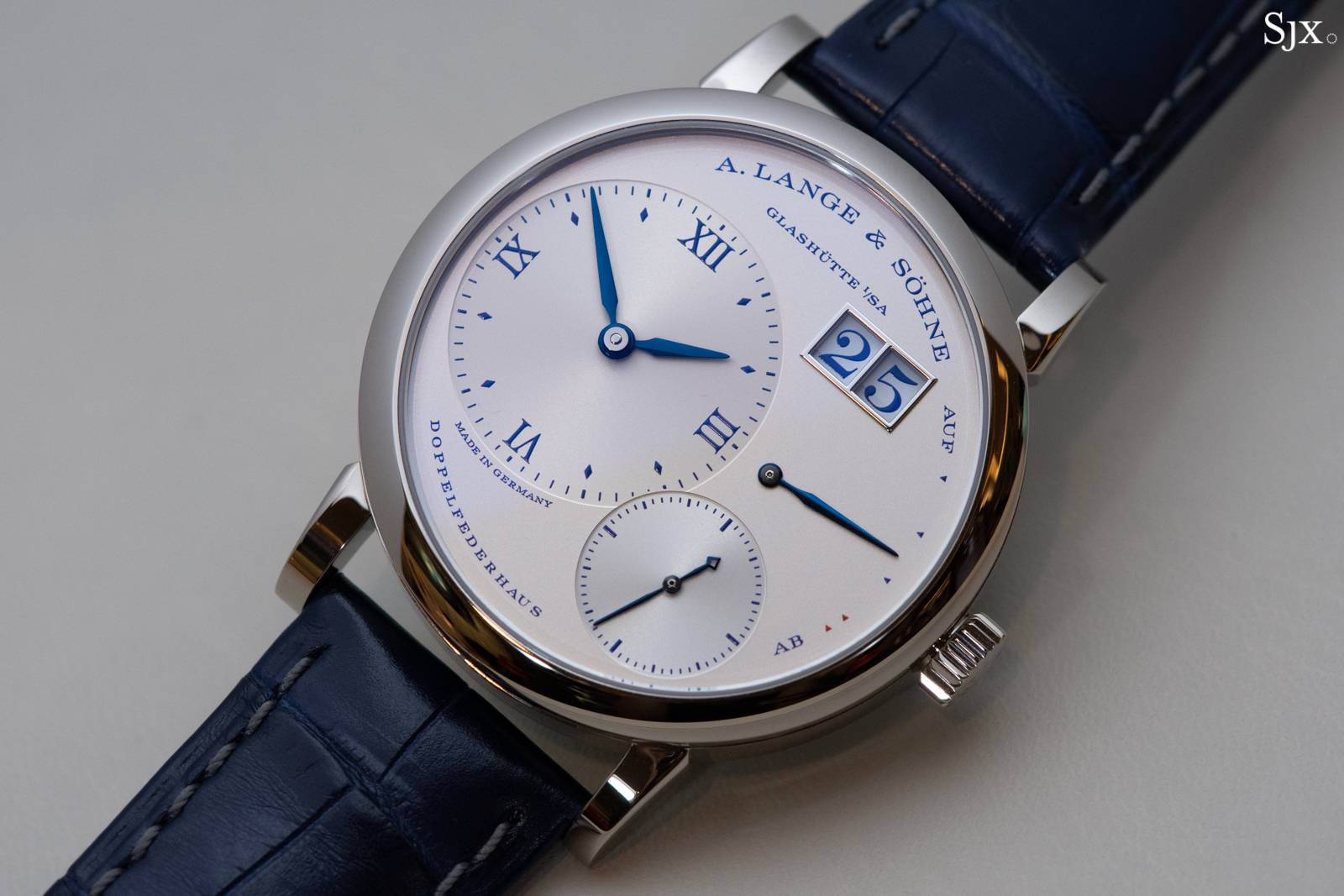 The Little Lange 1 “25th Anniversary” (ref. 181.066) is limited to 25 pieces and priced at €35,500 including German VAT, or about 54,200 Singapore dollars. Though it is officially part of the 10-piece anniversary set, most boutiques are offering the watches from the set individually.