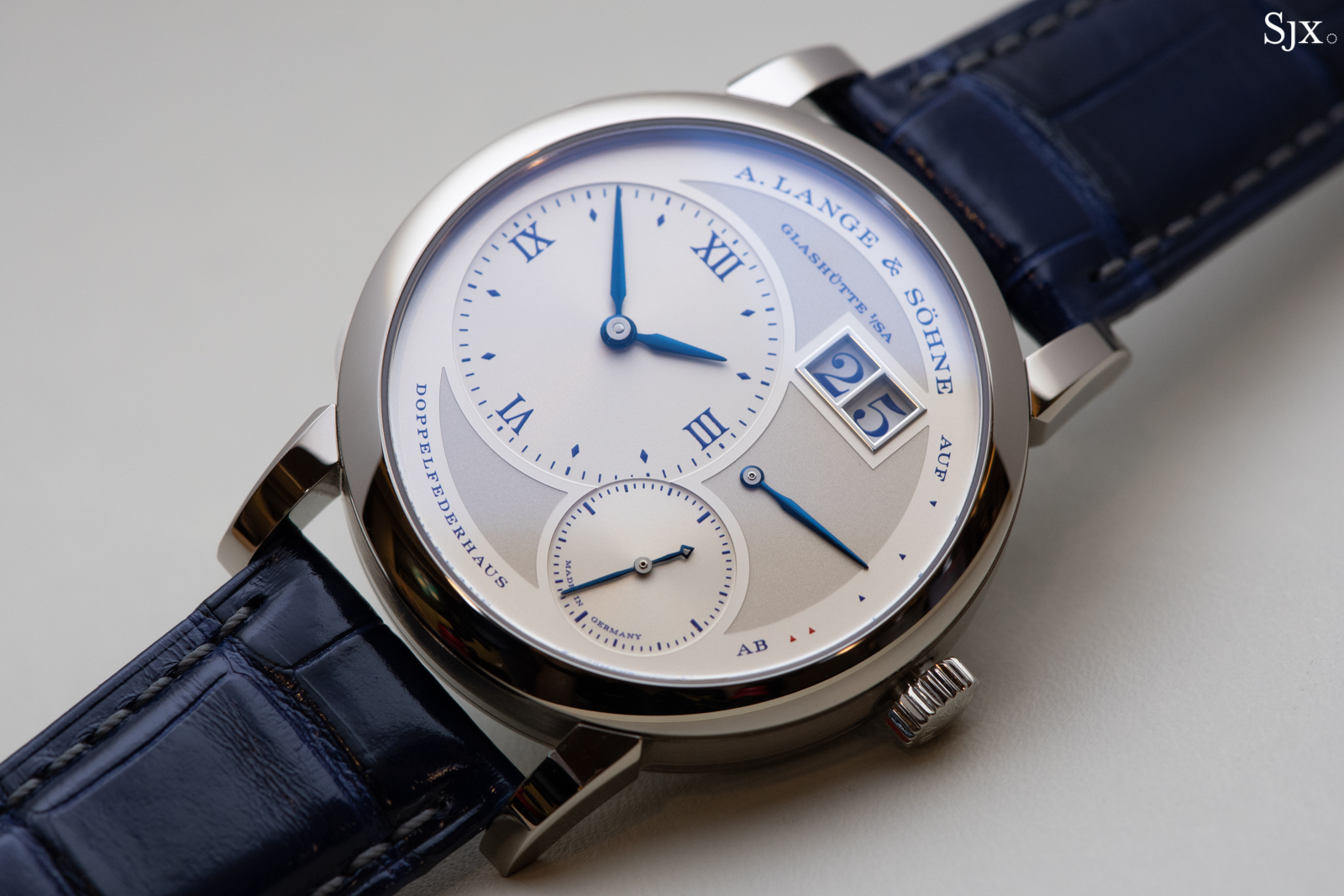 On October 24, 1994, four watches were unveiled in Dresden, all bearing “A. Lange & Söhne” on their dials, marking the resurrection of a venerable but dormant name in German watchmaking.

Three of the watches had a big date – and the last one didn’t have any date at all – which had deliberately set to “25” in photos, so as to show the correct date for the following day’s print newspapers (which are now even more quaint than a chain and fusee).

The first of the four watches, the Lange 1, became the iconic wristwatch of A Lange & Söhne. It has since evolved into an entire product line, ranging from moonphases to perpetual calendar tourbillons, all based on the same design.

Appropriately, to commemorate the brand’s revival 25 years ago, ten different 25th Anniversary Lange 1 watches will be progressively unveiled on the 25th of every month until October 2019; the Grand Lange 1 Moon Phase and Little Lange 1 have already been launched. The resulting 10 models will then be sold as sets, which in turn will be limited to 25 sets (and rumoured to be priced at about €800,000). Although the 10 are officially a set, each model has an individual retail price, which makes it easier to split a set.

The only commemorative watch sold individually, at least officially, is the Lange 1 “25th Anniversary”. 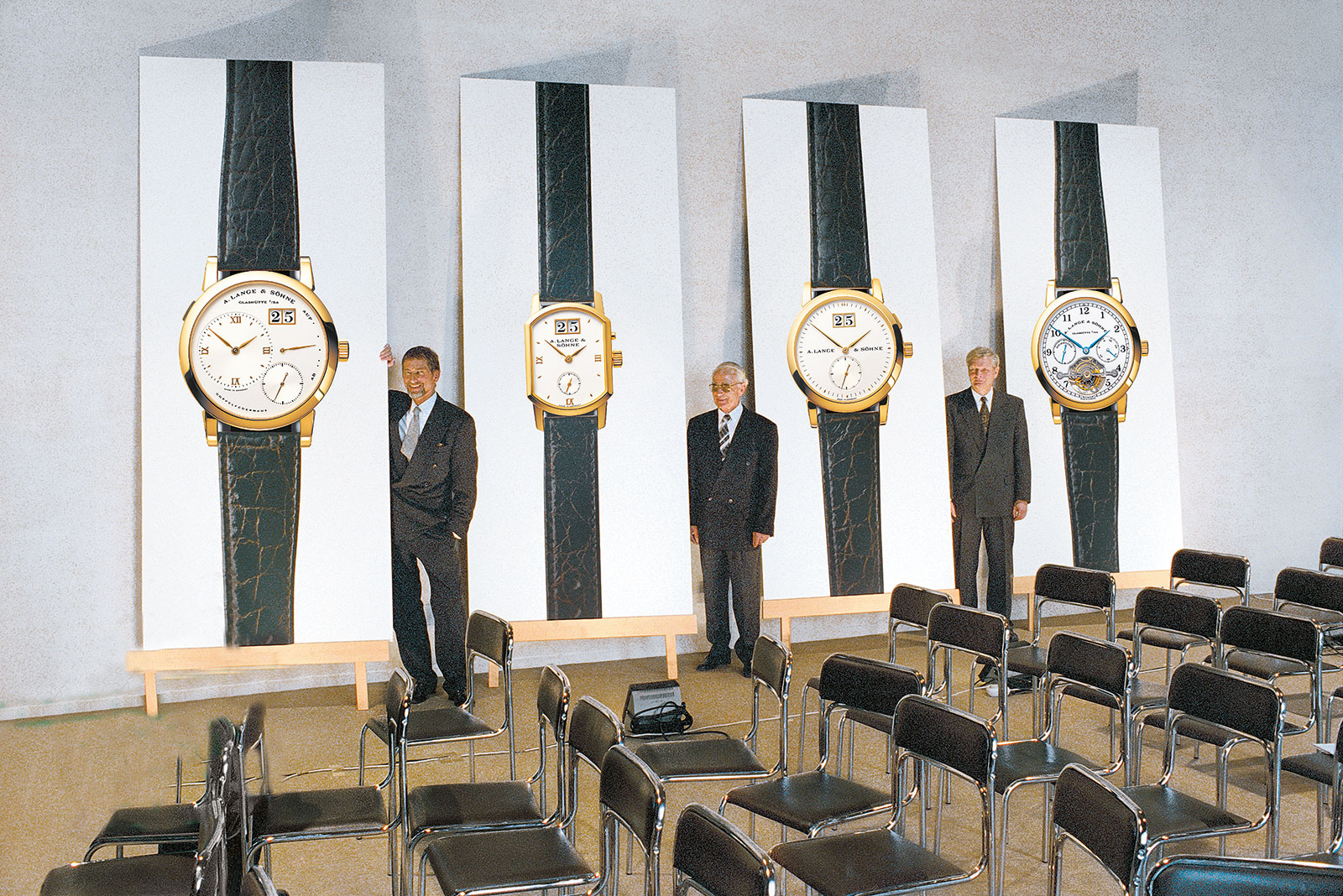 The presentation in 1994 at Dresden’s Royal Palace showing the inaugural collection of Lange, presented by (from left) Gunter Blumlein, Walter Lange, and Hartmut Knothe

This is the watch that started it all, the original Lange 1. At a glance, the look is unchanged – the signature off-centre time display, a big date at 2 o’clock, and the “auf-ab” power reserve indicator just below. 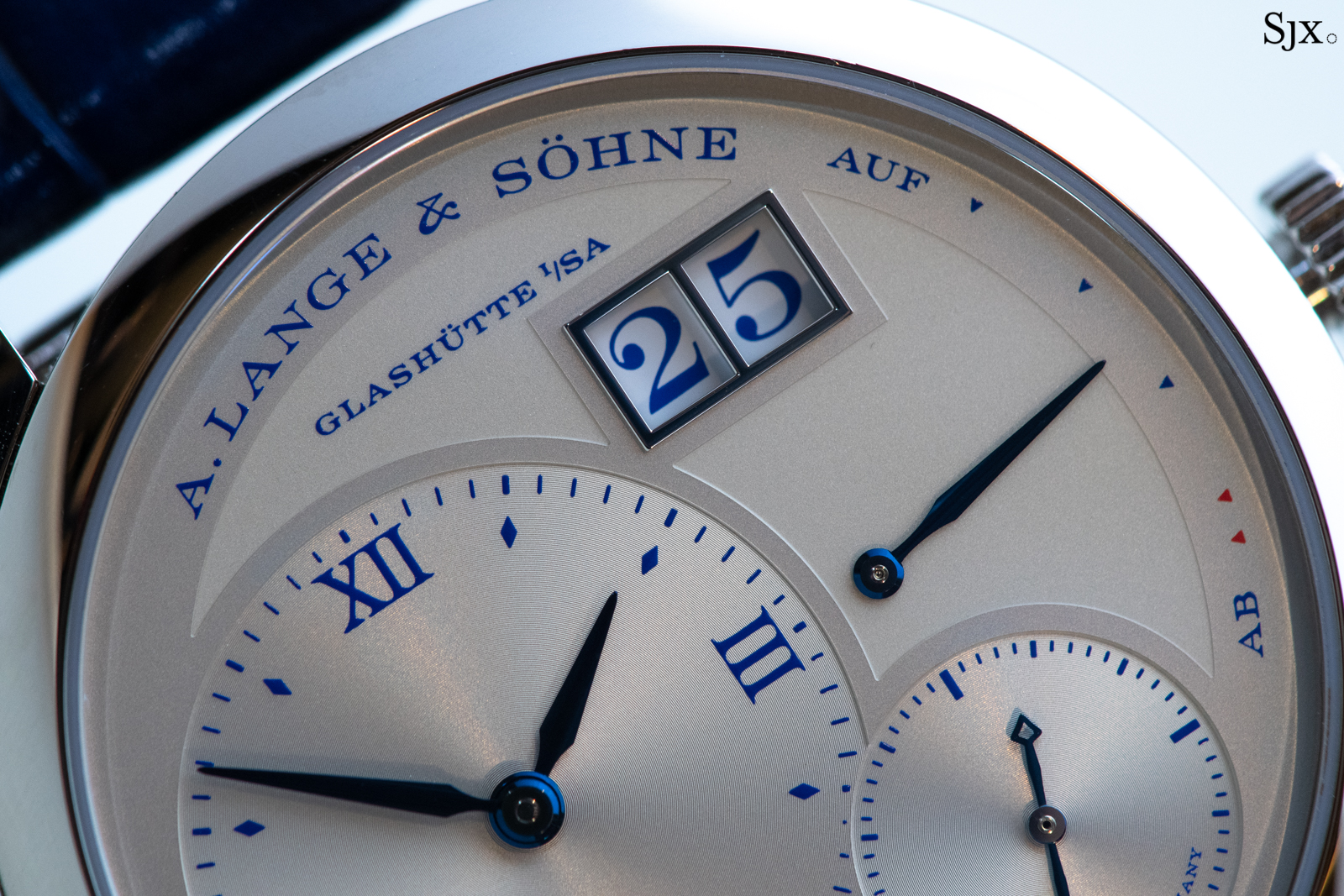 But the dial incorporates numerous, mostly subtle, details to differentiate the anniversary watch from the standard model. The most obvious is the dial surface, which has the empty sections recessed and given a frosted finish. This gives them a muted, darker appearance that contrasts the raised, silvery outlines that reflect more light.

Also, all the lettering on the dial is printed in blue instead of black, including the numbers of the big date – which remains the trademark white so it’s a different tone from the dial. Even the Roman numerals and indices are printed in blue, a feature found only on a handful of Lange 1 variants, while the regular Lange 1 typically has them as applied markers. 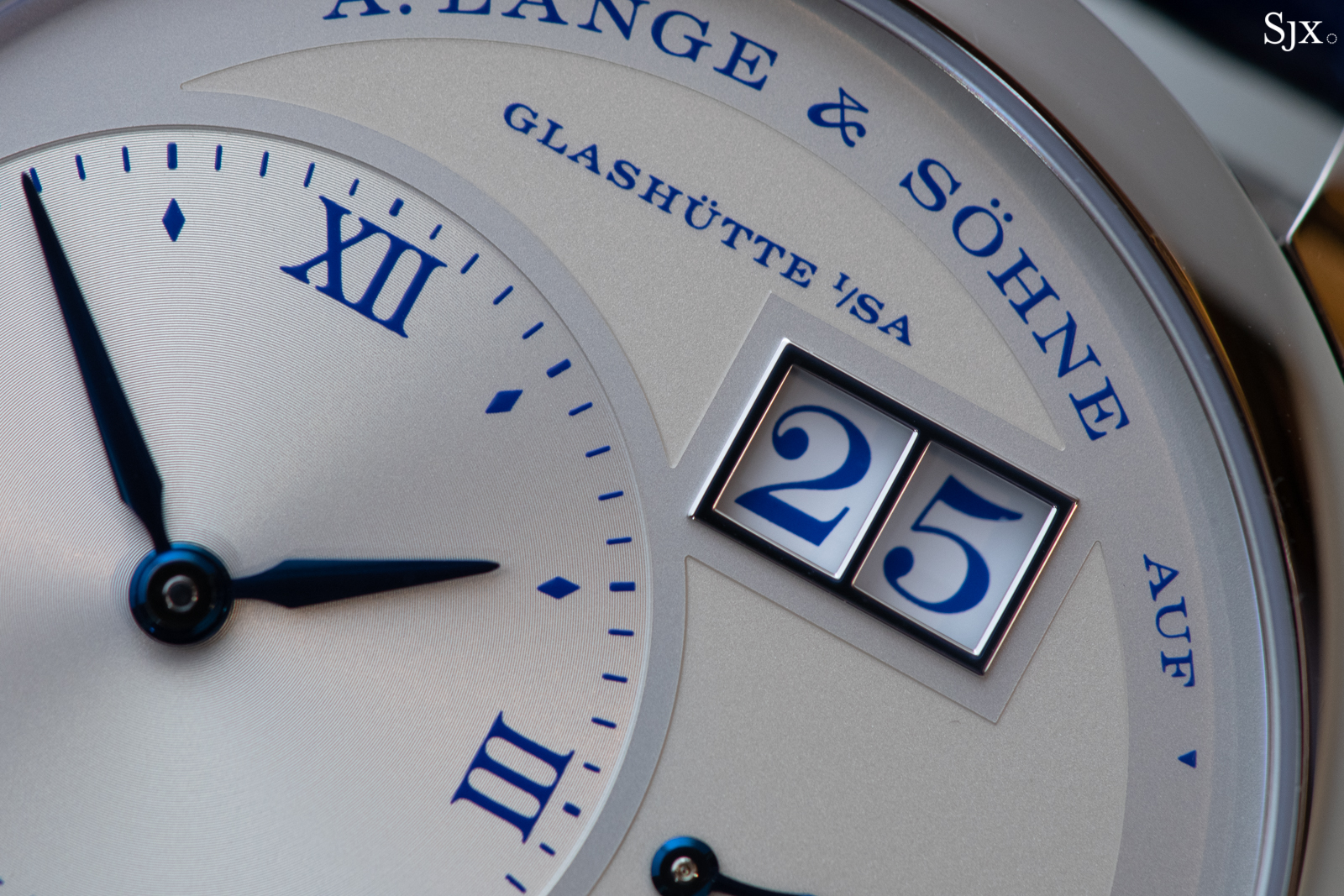 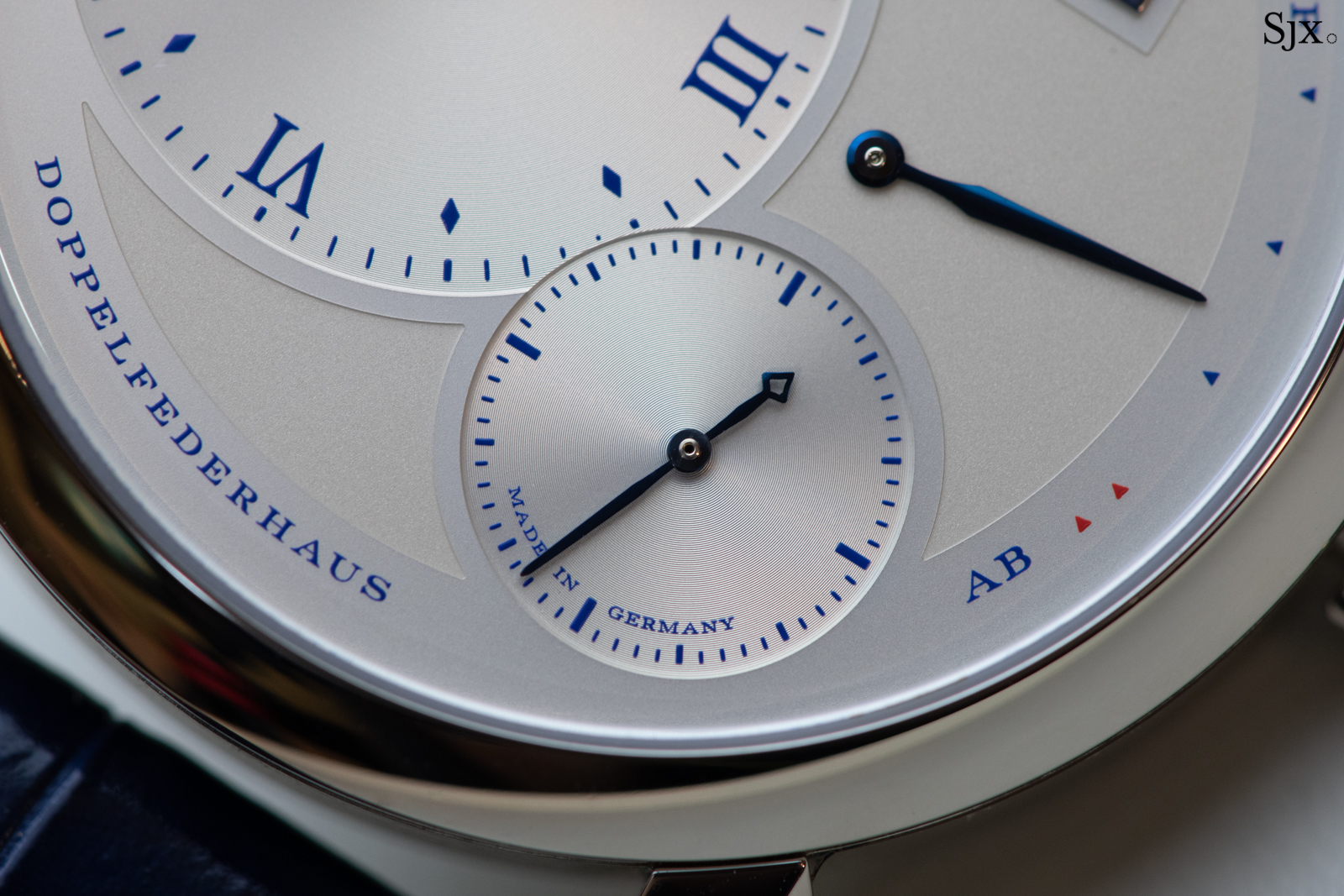 Note the red accents signifying a low power reserve; “ab” translates as “down”

A feature found here that’s common to all Lange dials is the fine, radial guilloche on the sub-dials, also known as azurage. This gives the effect of a radial shimmer, as the light reflects in the concentric grooves. 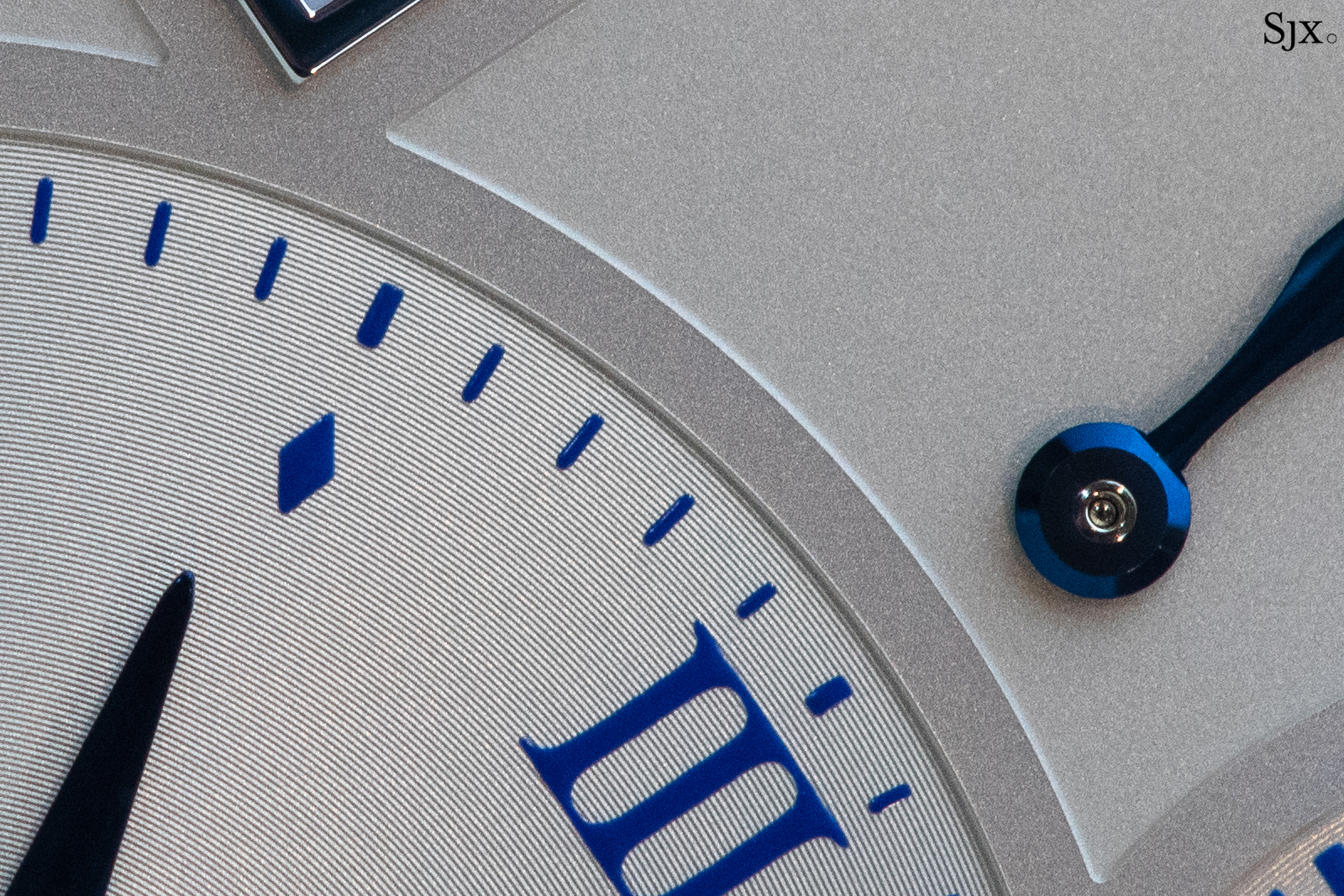 Typical of the brand, the case is made of three sections – a polished bezel, brushed middle, and case back – with a pusher for the date. The white gold case is 38.5mm across, exactly the same as the original Lange 1 of 1994 as well as today’s standard models.

But being a second generation Lange 1, the case height has increased nearly a full millimetre, from 9.8mm on the stock model to 10.7mm for this anniversary edition. That, however, is not apparent on the wrist and the watch retains its handsome proportions. 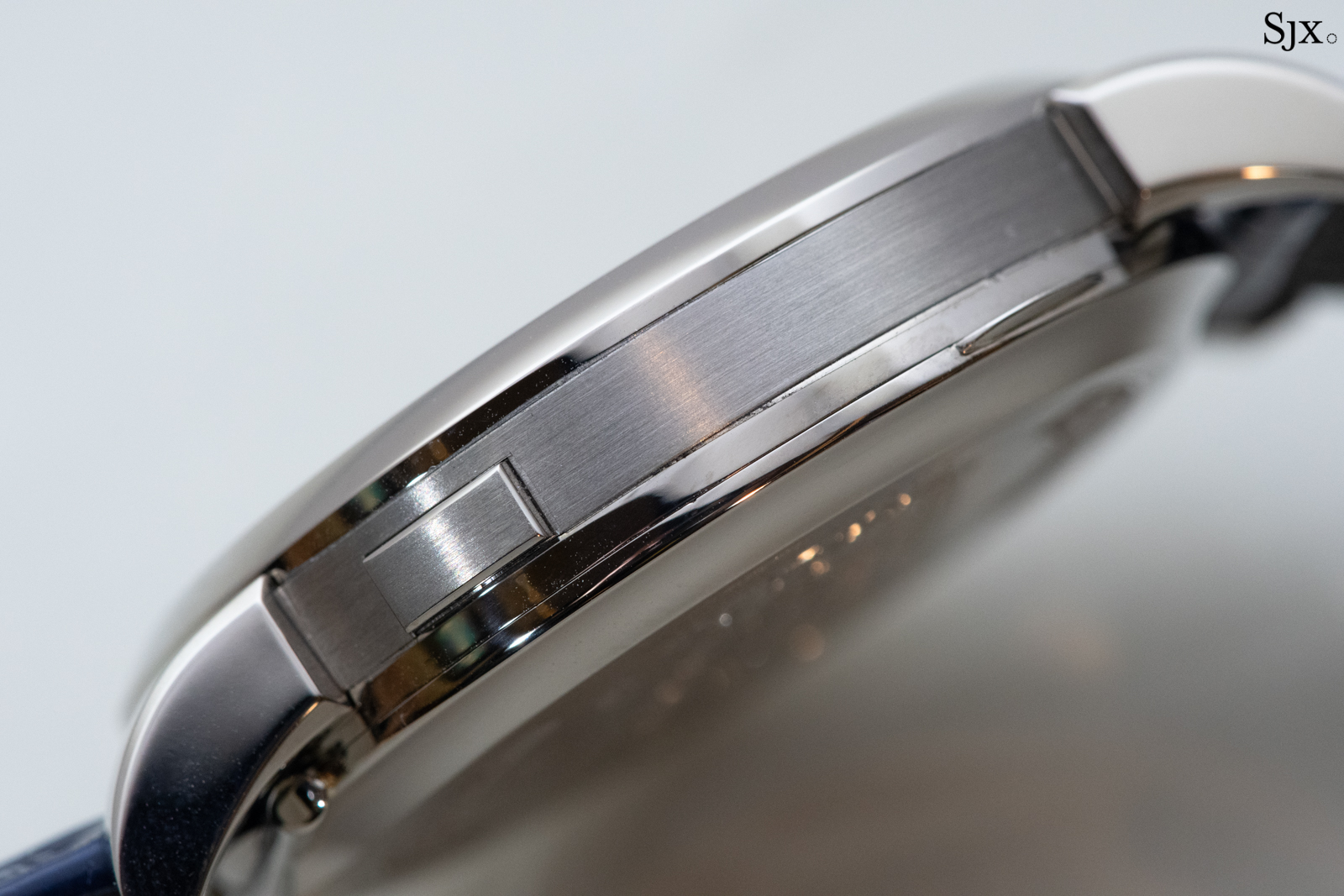 Remember the past and its personalities

The reason for the increased height is apparent when the watch is flipped over, revealing the hunter back with an elaborate engraving of the original Lange manufactory in Glashütte. Executed in a slightly stylised manner reminiscent of Impressionism, the engraving is done by hand with a burin, a sharp tipped tool that removes metal, adding an artisanal touch to the watch.

The case back design is reminiscent of the solid backs found on some of the first Lange 1s, with display backs only introduced a year after the model’s introduction. Framing the engraving is a circular border containing the names of the key individuals who resurrected the brand in 1990, Günter Blümlein and Walter Lange, both now unfortunately deceased.

As with most Lange watches that have a hunter back, the case is produced by a case maker located just across the street from Lange headquarters. Though it’s not the only case supplier Lange uses – the two others are in Switzerland – this is usually the go-to supplier for complex or special cases. 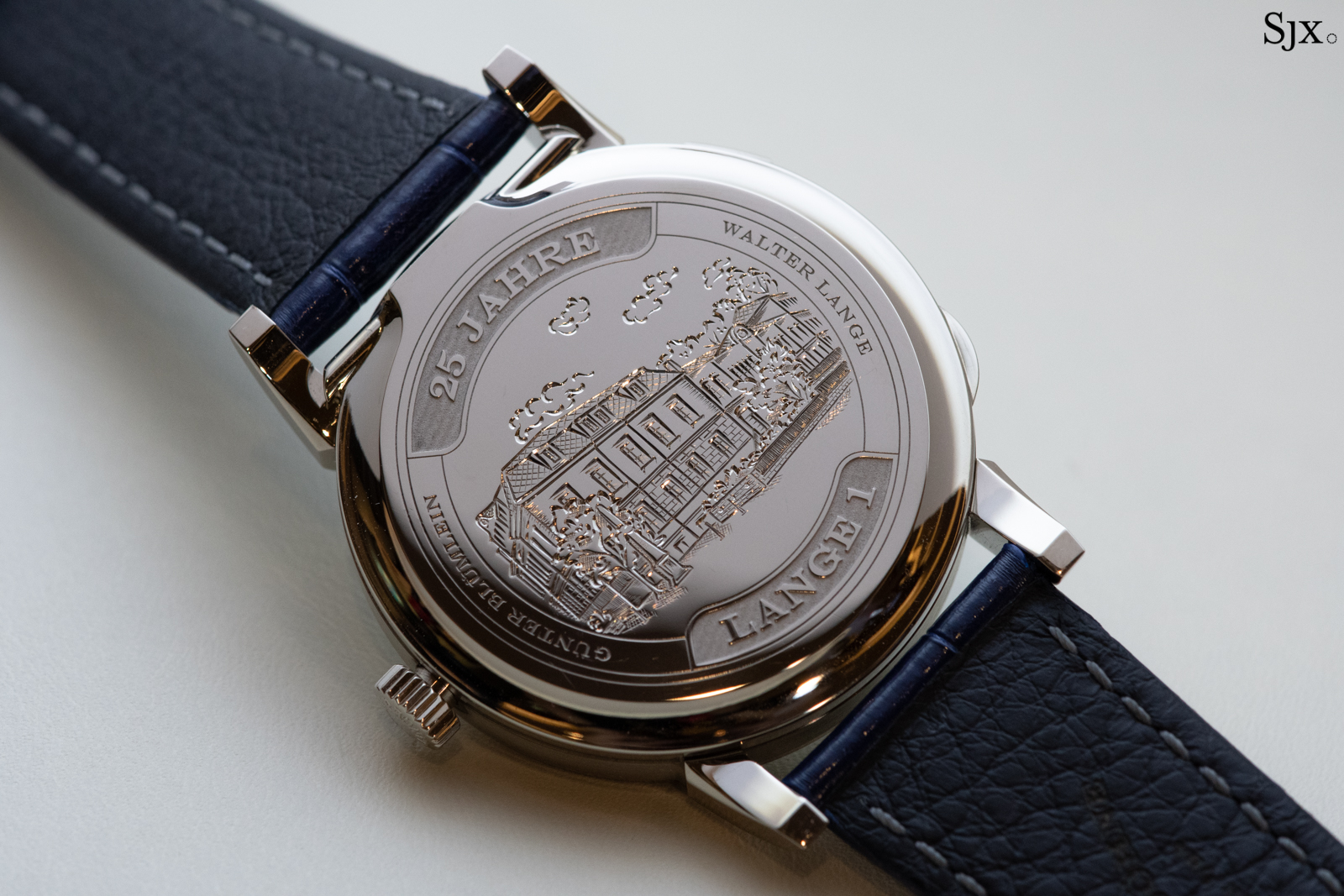 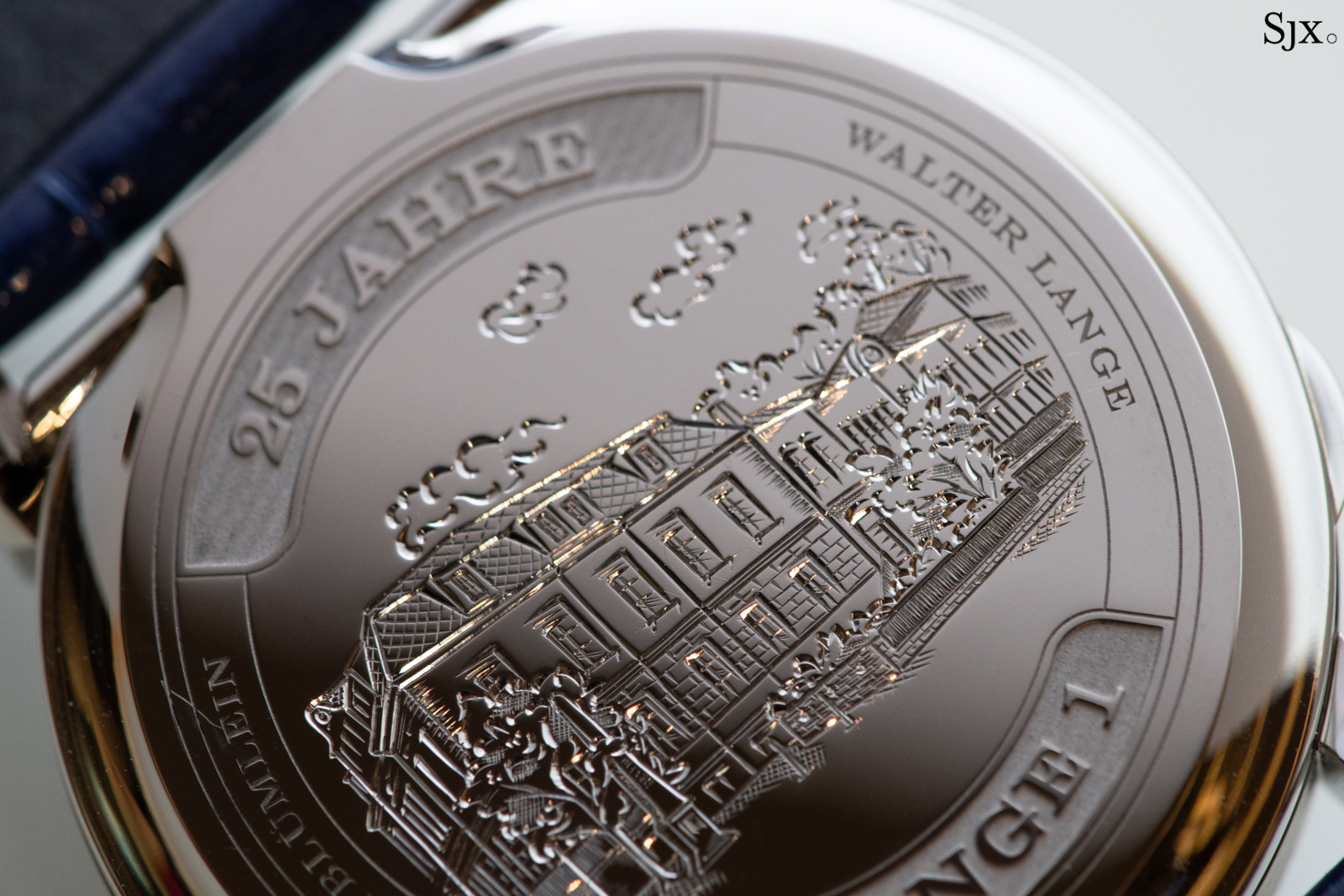 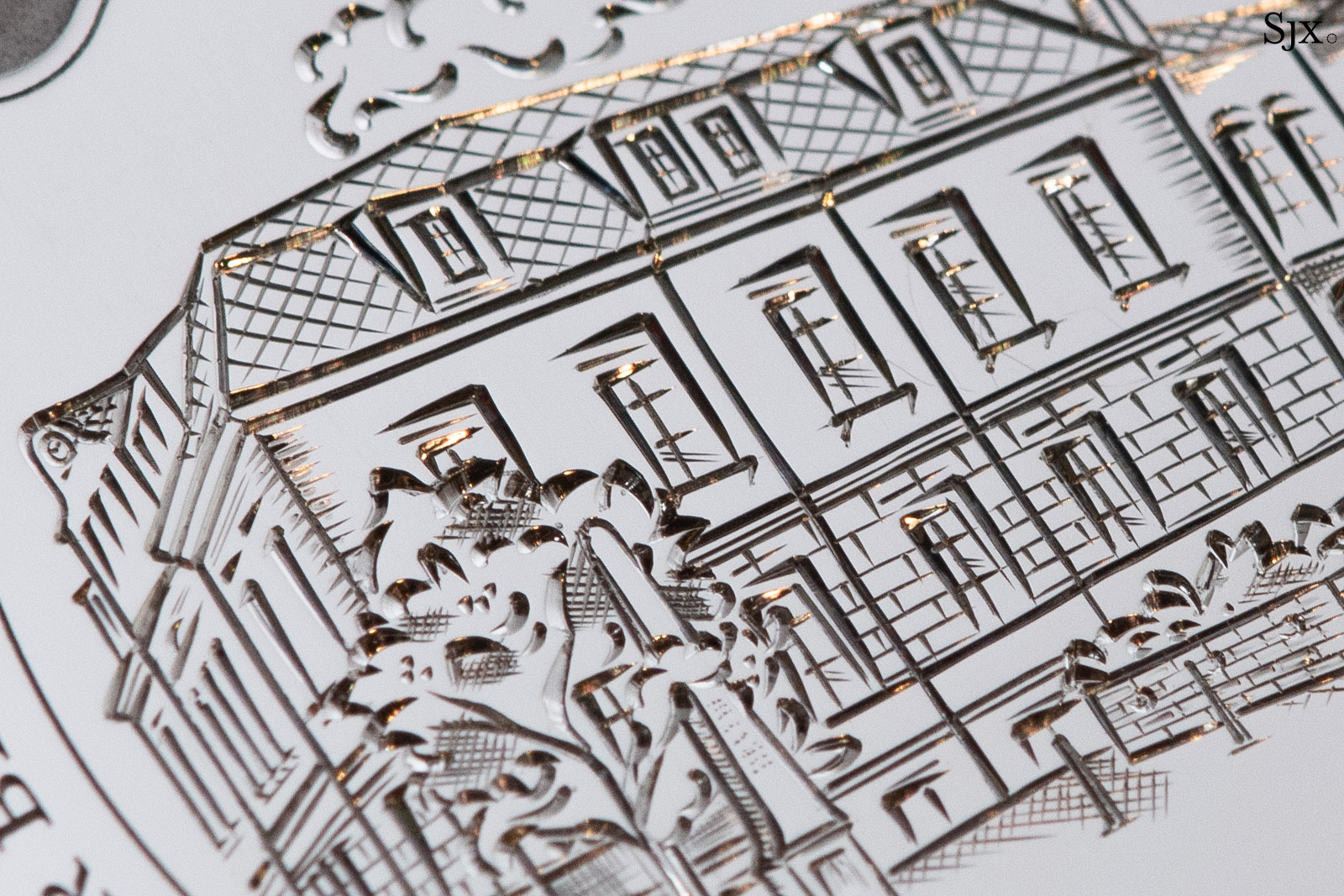 The cuvette can be opened via a tiny, discreet tab on its edge. The hinge of the case back opens up to a right angle that’s sufficient but it would be more helpful if the back opened further back for a more comprehensive view of the movement. 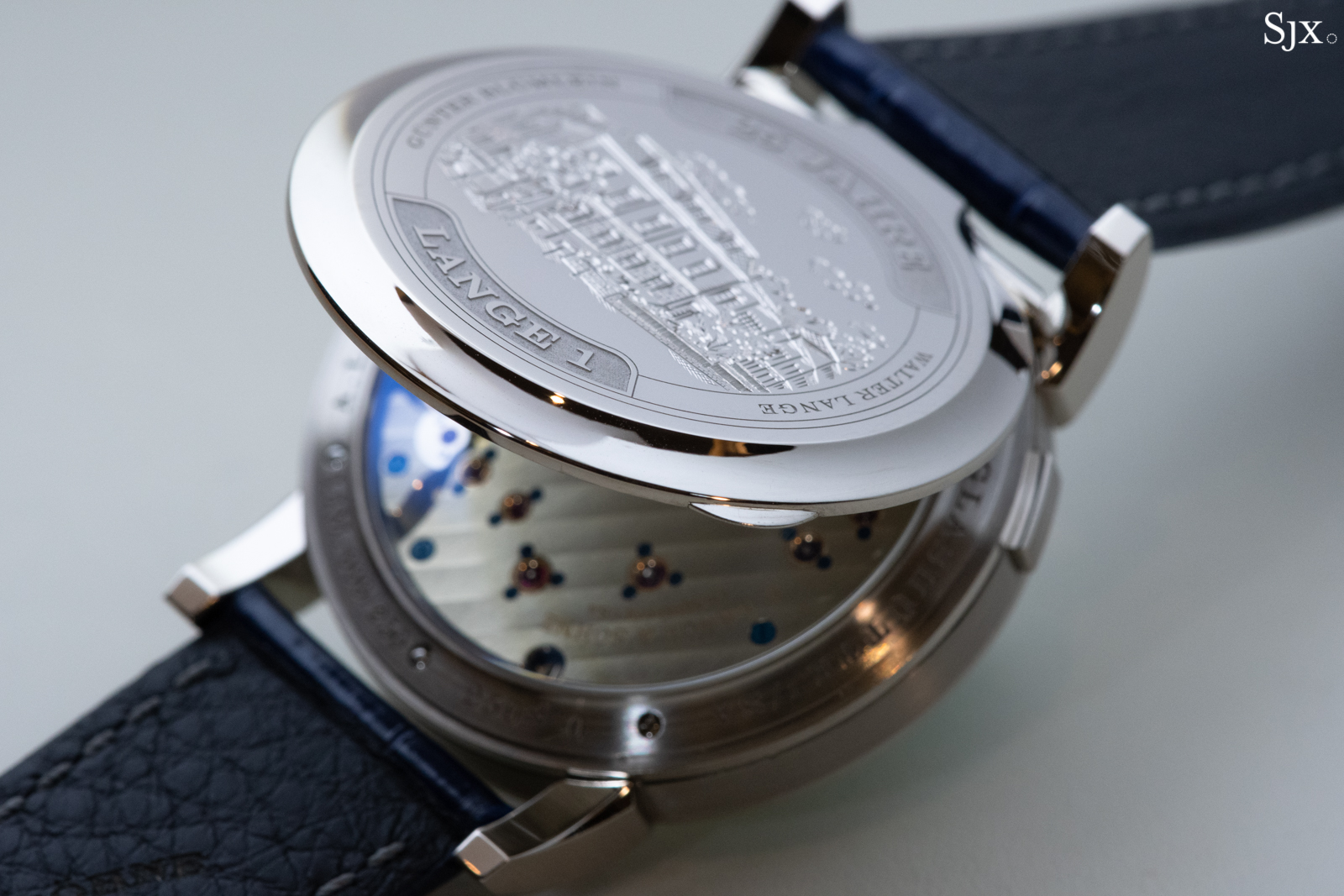 The tiny tab to lift the back 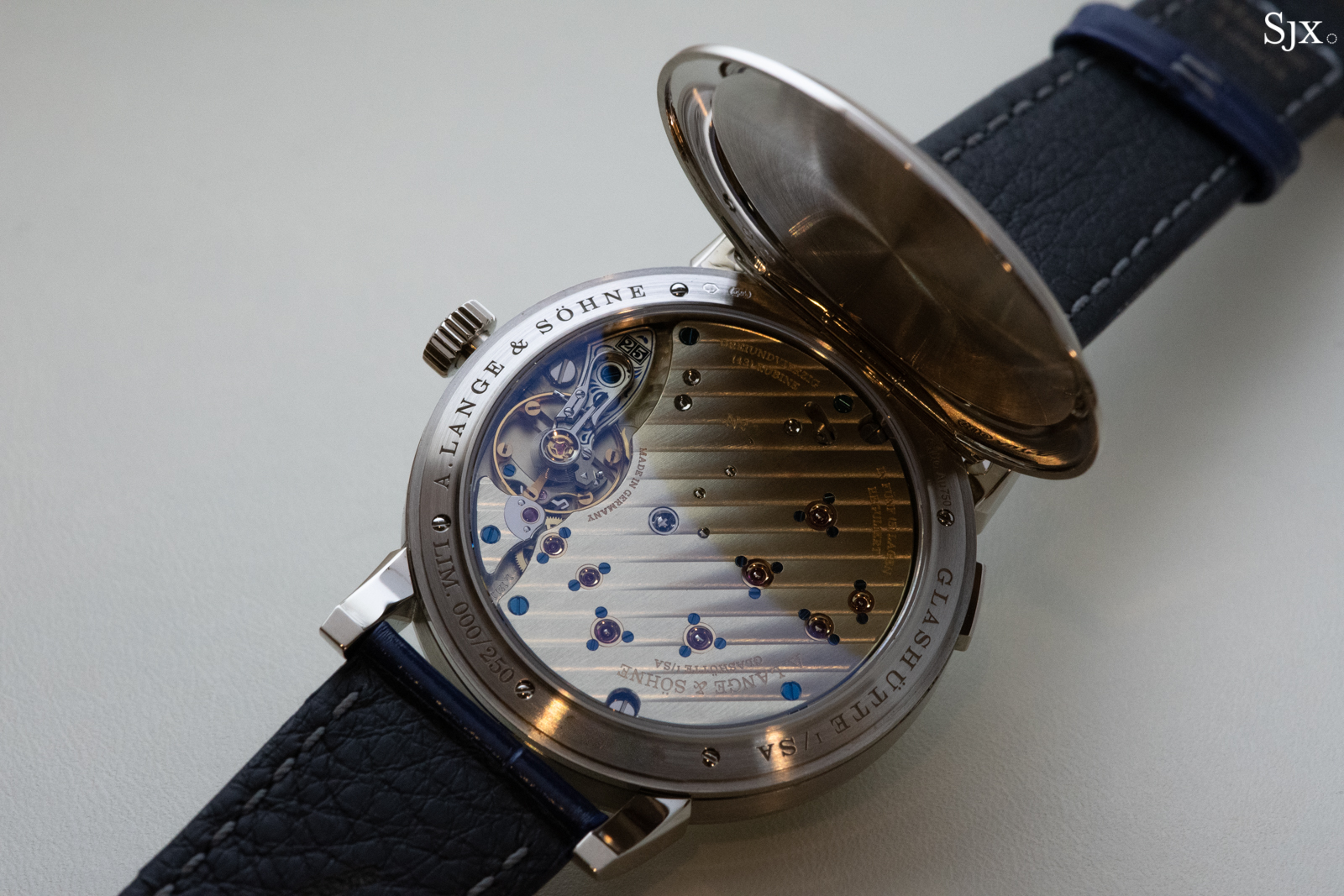 A view only for the owner

It’s worth noting that the hunter back is constructed in a extremely robust and solid manner. The hinge works silently, smoothly, and without any plate, while the back snaps shut with a reassuring click.

In fact, the hinged back is almost a dead ringer for the hunter back on the 1815 Rattrapante Perpetual Calendar Handwerkskunst, a watch that was several orders of magnitude more expensive. That illustrates a defining characteristic of the brand, which never does anything in half measures. regardless of the price point.

Inside the L121.1, introduced in 2015 as a successor to the original L901.0 movement from 1994. To recap, the new movement was designed from the ground up to retain the Lange 1 dial layout but enhanced with updated features, namely:

The improvements raise the movement part count, albeit minimally, to 368, compared with 365 of the original L901.0. The power reserve remains the same, 72 hours.

The movement here is functionally identical to the base model, with the only difference being the balance cock. Instead of the usual floral motif found on stock models, the anniversary watch has a balance cock engraved with a reproduction of the big date display showing “25” that’s been filled in blue lacquer. 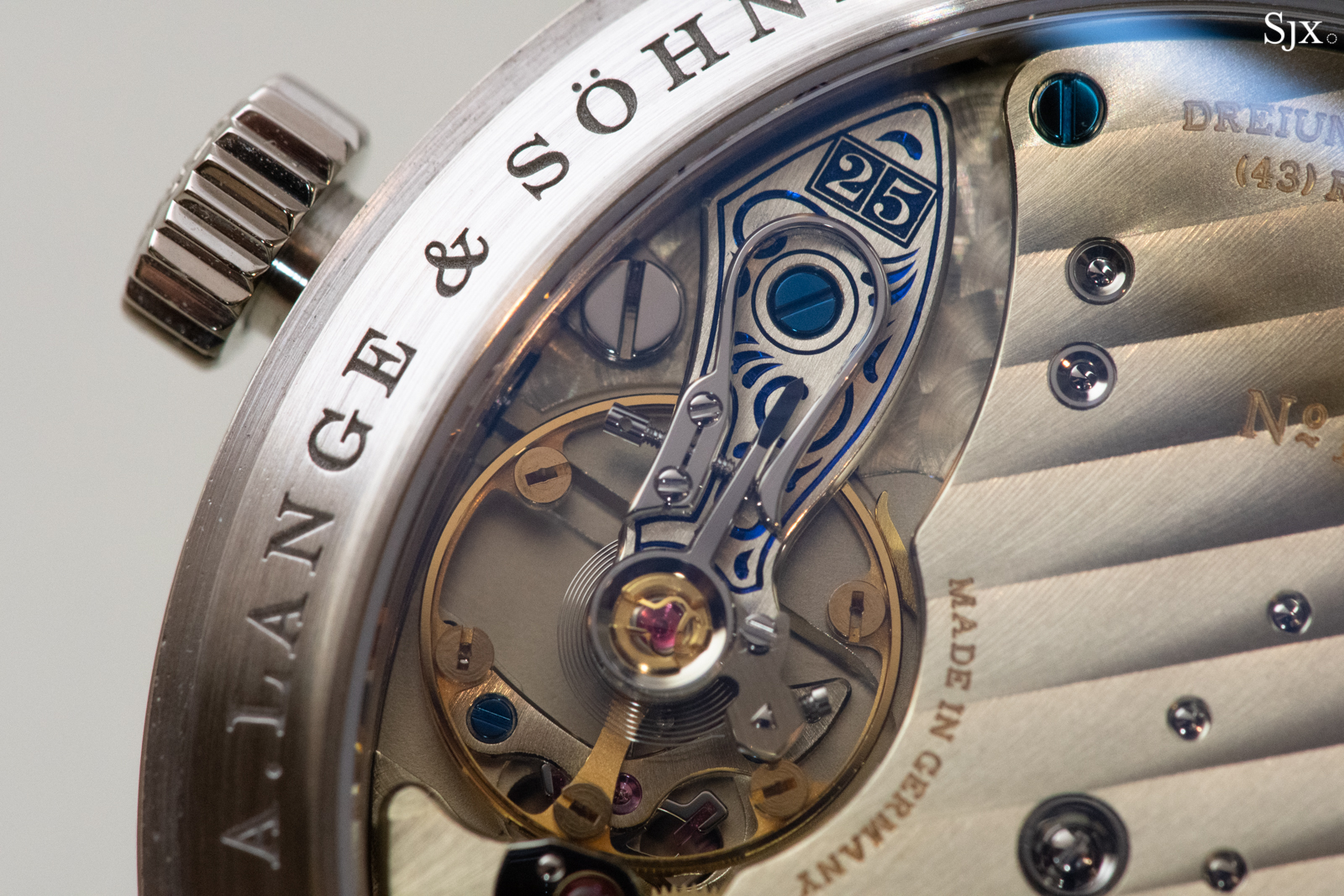 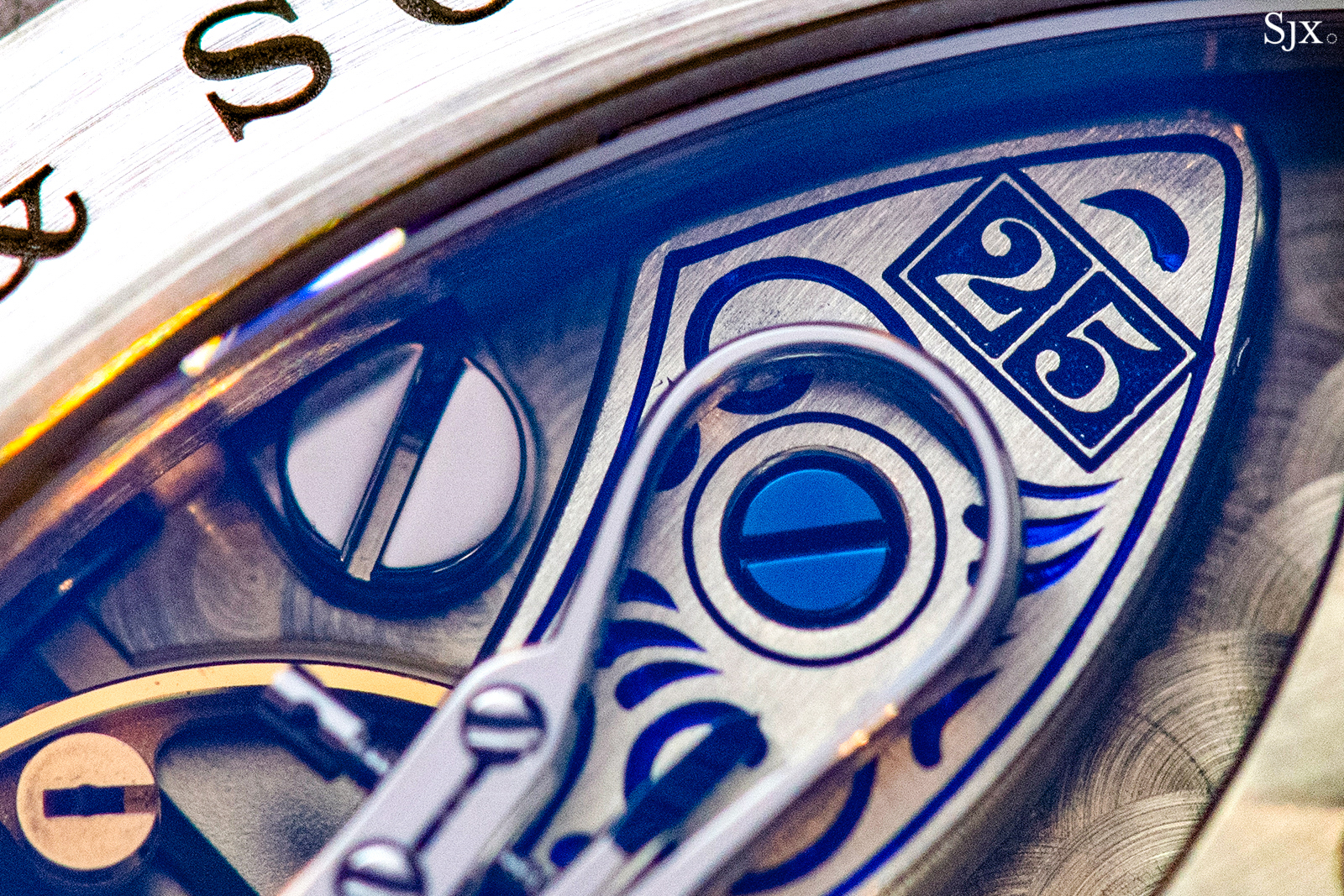 The rest of the movement is finished in the usual Lange fashion – meaning a high, high standard including polished anglage, gold chatons for the rubies, and striping of the maillechort, or German silver, three-quarter plate.

But visually it is perhaps a little plain, as the plate is a large, unbroken expanse of metal, lacking the “island” bridges of the original Lange 1 movement. 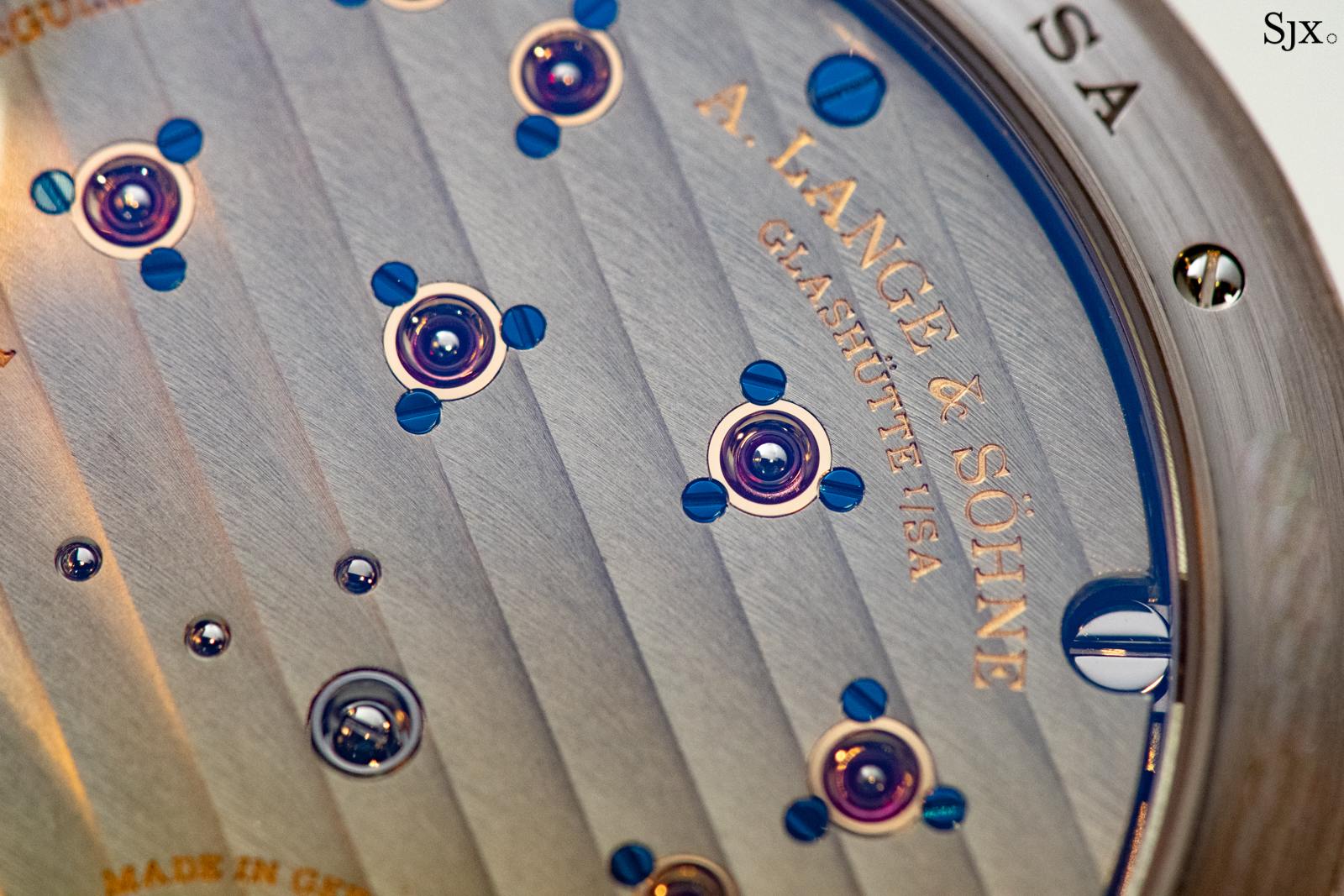 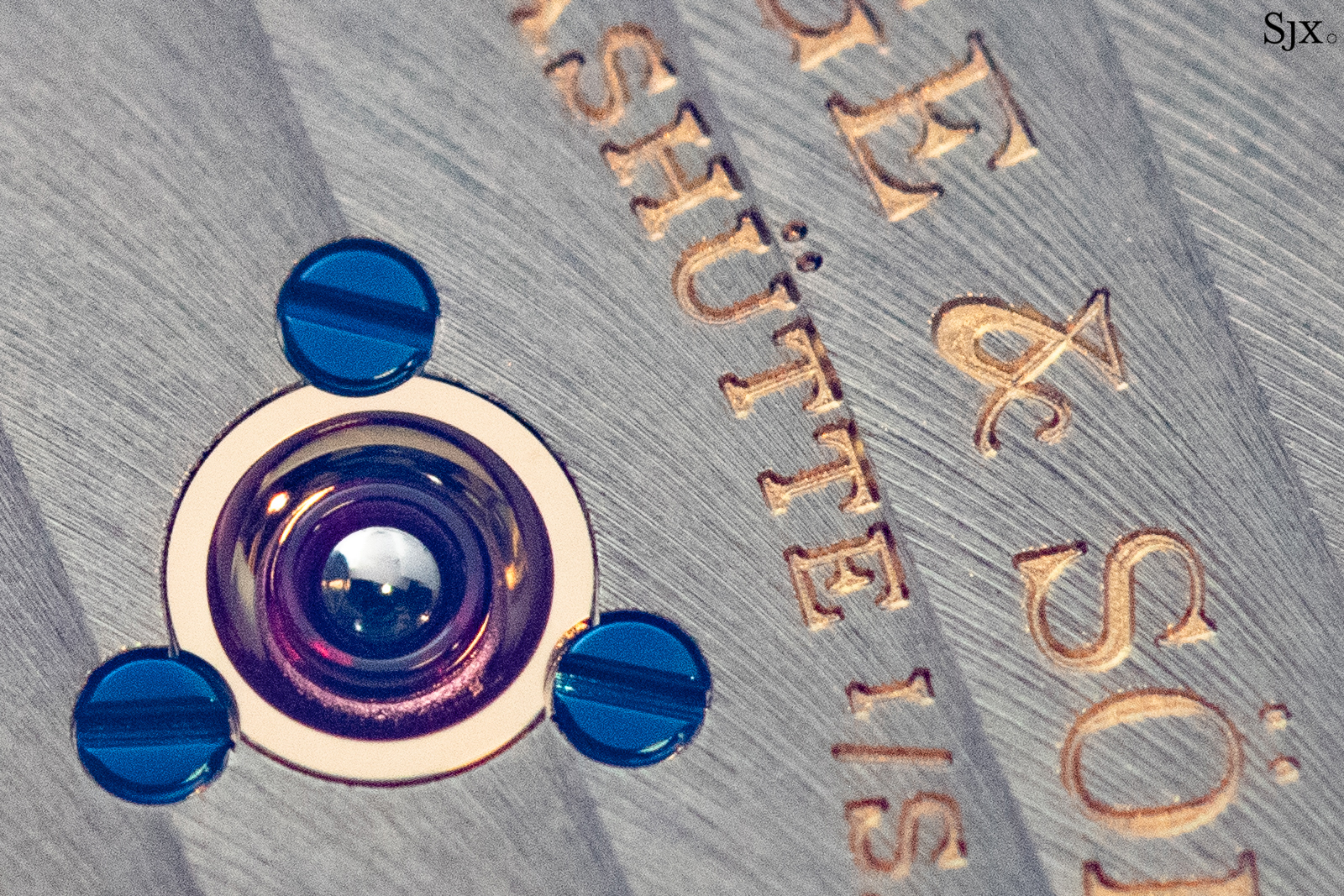 Gold chatons for the ruby bearings

As a limited run of 250 pieces, the Lange 1 “25th Anniversary” commands a hefty premium of about 35% over the standard model.

That’s steep, but the cost is justified by the engraved, white gold hunter back, and to a lesser degree the various aesthetic tweaks, as well as the fact that it’s a limited edition release. In any case, the anniversary Lange 1 is a refreshing take on an iconic timepiece that is normally seen as classical and austere. 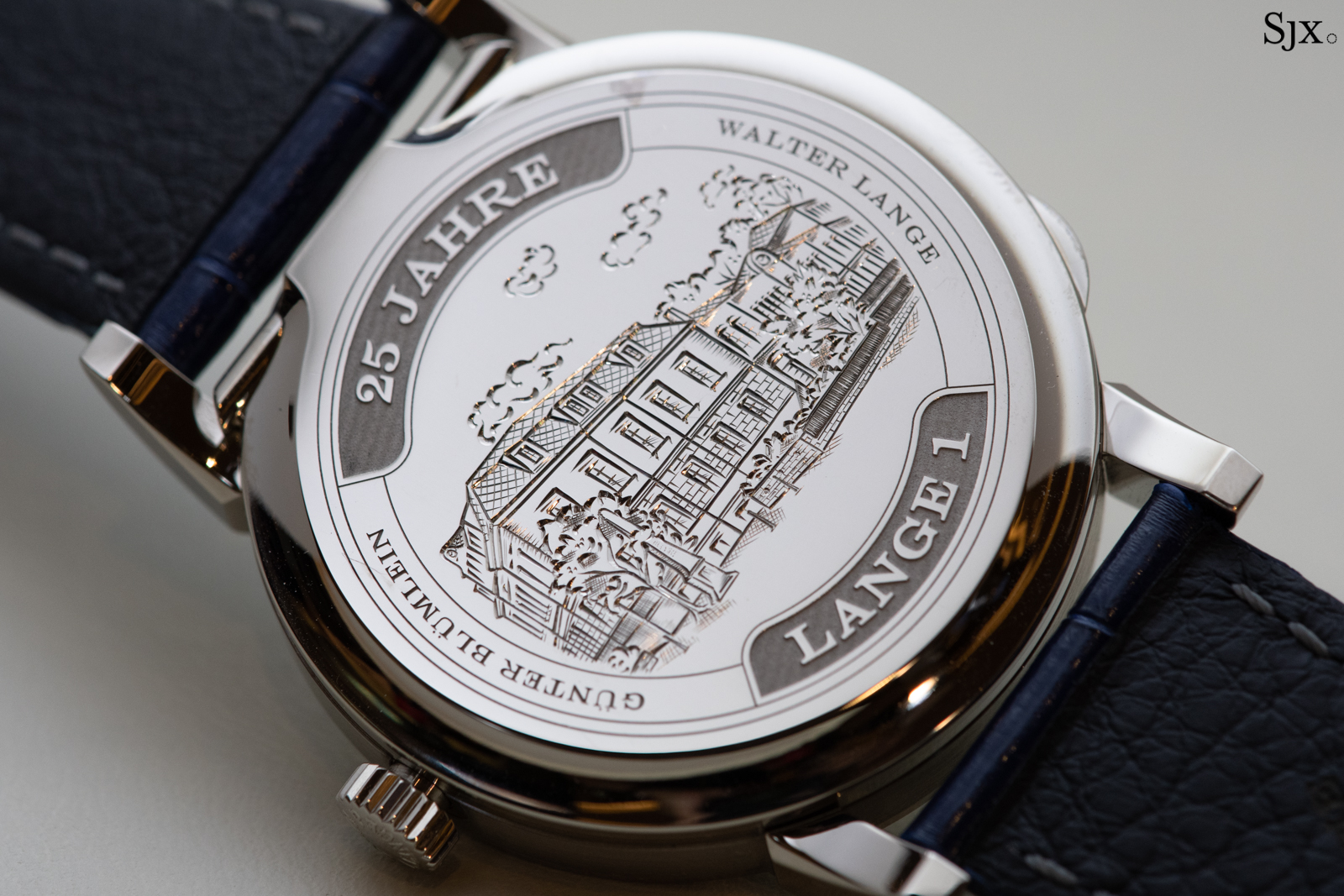