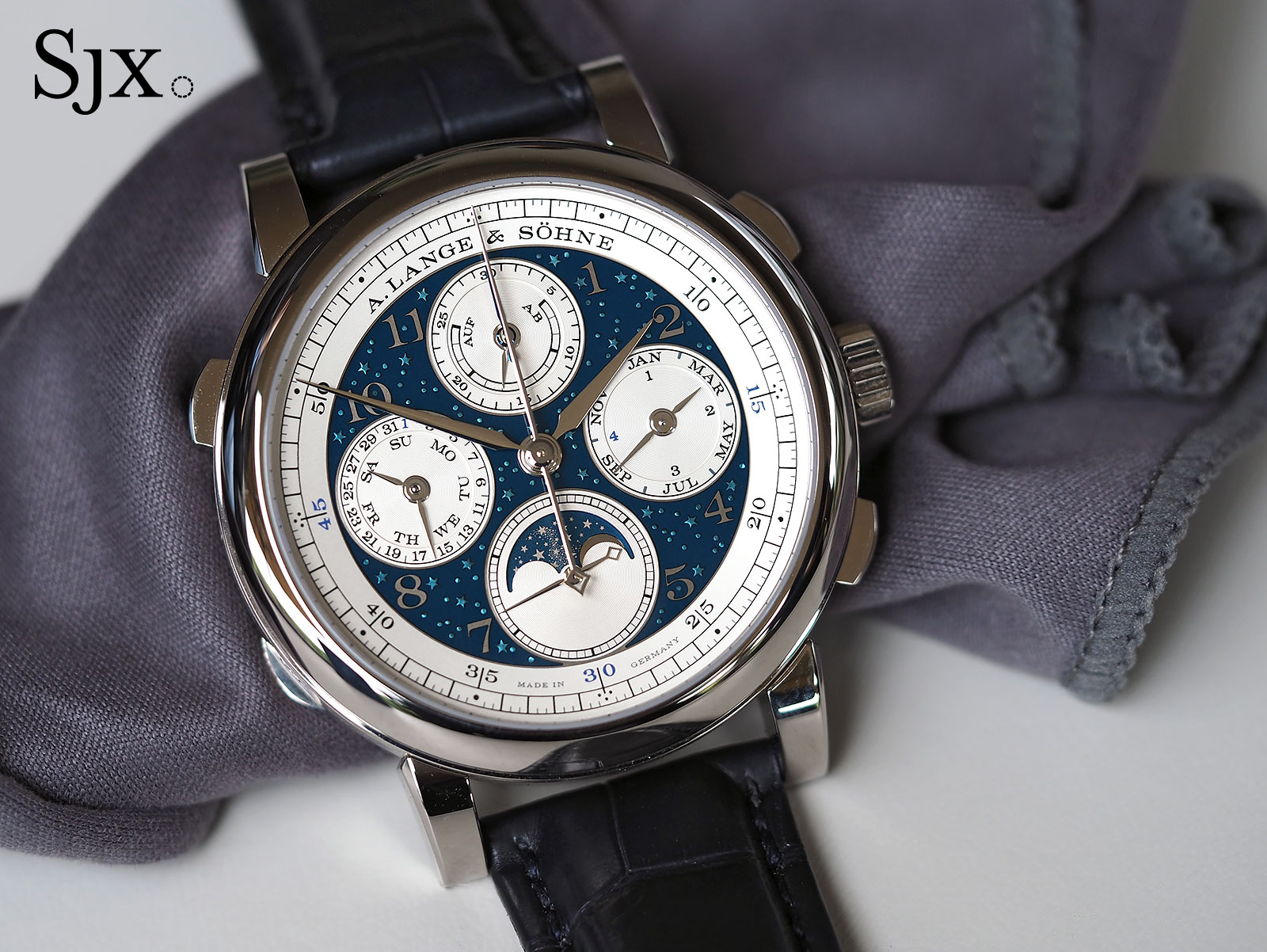 Handwerkskunst, meaning “craftsmanship” in German, is an appellation bestowed upon only a handful of A. Lange & Söhne watches that are elaborately decorated by hand. These watches are a superlative bunch – the last was the 1815 Tourbillon Handwerkskunst – the top tier of a top-tier brand.

Today, the German watchmaker has unveiled a Handwerkskunst version of the 1815 Rattrapante Perpetual Calendar that’s perhaps the most lavishly decorated Lange wristwatch ever made. In fact, it’s the first model in the Handwerkskunst series to combine the art of enamelling and engraving. Visually, it looks as though the moonphase display has been extended to occupy the full expanse of the dial. Made of six parts with the enamelled portion in 18k white gold, the dial is relief-engraved with stars and covered in translucent vitreous enamel, a technique known as champleve. It’s matched by subtle accents on the dial in the form of blue minute numerals at the quarters. While the enamelling is the highlight of the dial, no expense was spared with the finer details. The hands for the time, calendar indicators as well as power reserve display are in white gold while the minute counter hand is in blued steel. Both split-seconds hands are steel, but one is gilded to distinguish them. The dial alone would have put the watch – both lush and compelling – in a category of its own amongst Lange wristwatches. But there’s more on the reverse. Like the several Lange limited editions past (the Concorso d’Eleganza Villa d’Este watches) for instance, the 1815 Rattrapante Perpetual Calendar Handwerkskunst features a hinged case back that depicts the Roman moon goddess Luna, executed in relief and tremblage engraving. The medallion shows Luna clad in her characteristic billowing veil, crowned with a crescent moon diadem and a torch with which she lights up the darkness. Circling the medallion is an engraved star-and-cloud relief in champleve enamel, in that same deep, striking shade of blue found on the dial.

The astronomical theme follows through to the bone. Though the movement inside is the same 631-part cal. L101.1 that powers the ordinary version of the watch – hand-wound with a 42-hour power reserve – the Handwerkskunst iteration has its base plate and bridges finished with granular frosting. The chronographs bridges as well as on the balance cock are highlighted with relief stars and tremblage engraving. The calibre was the eighth chronograph movement from Lange, and it was pragmatically constructed with several clever features – like the flat and wide chronograph levers imported from the Tourbograph Pour le Merite – giving it a height of just 9.1mm, making it thinner than the Double Split despite the added perpetual calendar. Thus, even with all that complexity under the hood, the watch is just 15.8mm high (the regular version sans hinged back is 14.7mm high). The diameter is still 41.9mm, exactly the same as the ordinary model.

Stayed tuned for photos showing the incredible detail of the watch, to come very soon.