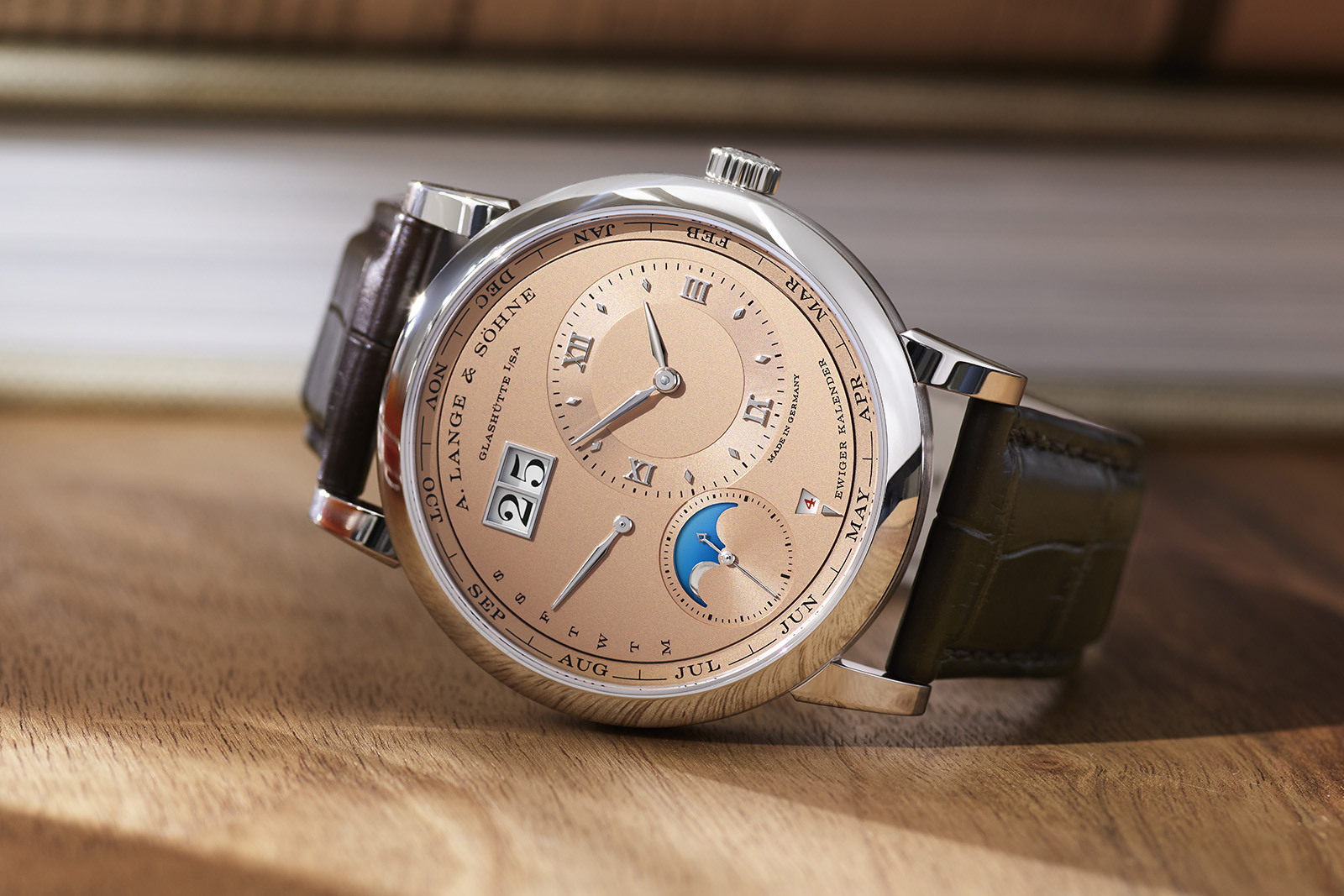 A. Lange & Söhne first unveiled the Lange 1 Tourbillon Perpetual Calendar in 2014.  Still the most complicated Lange 1 in the line up, the watch combined an instantaneous perpetual calendar with a discreet tourbillon only visible on the back side.

Fast forward seven years later, Lange finally unveils a simplified version – but still a complicated watch – the Lange 1 Perpetual Calendar, now without the tourbillon. Two variants are available: in pink gold with a grey dial, or in white gold with a solid pink gold dial. 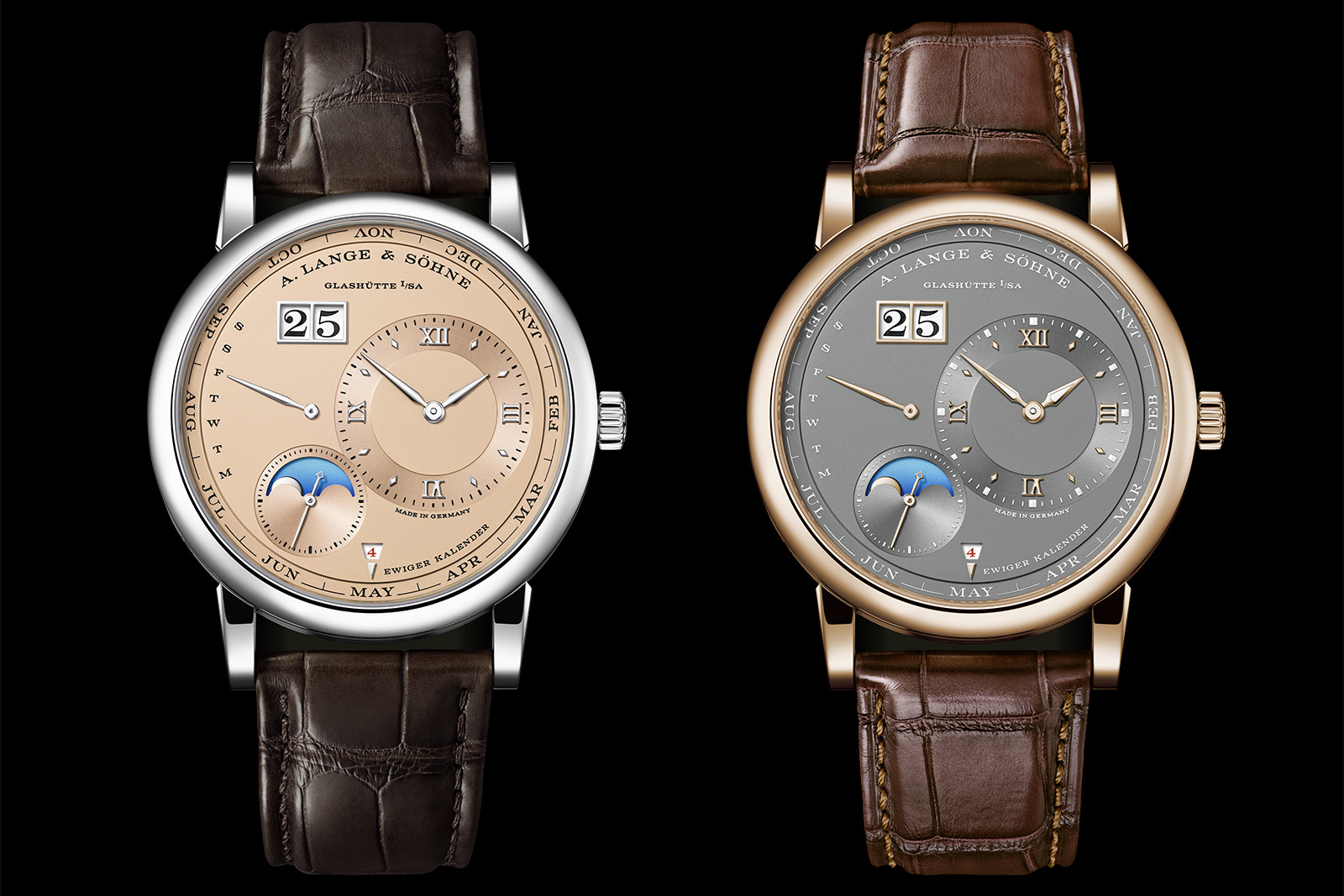 At a glance, one can be forgiven for thinking this is another version of the Lange 1 Perpetual Calendar Tourbillon. It is, however, a completely new model that distills the design to focus on a fascinating perpetual calendar, without the added complexity and cost of a tourbillon.

In typical Lange style, there were no shortcuts taken: the watch is powered by a new(ish) movement, rather than the same calibre minus the tourbillon. The removal of the tourbillon makes it more accessible, but the new watch is still a hefty €98,000 with the grey dial (and a bit more for the pink gold). At the same time, it might dilute the status of the pricier, flagship tourbillon variant.

Nevertheless, the Lange 1 Perpetual Calendar is intrinsically an exemplary perpetual calendar – in both construction and design – especially the pink gold dial (or “salmon”) being a trendy colour that would likely be the more popular choice.

The dial is the classic Lange 1 layout, with the off centre sub-dial for time, balanced by the big date and moon phase. The big date at 10 o’clock indicates this is an automatic movement, as a manual-wind Lange 1 has the date at two o’clock.

Most important is the unconventional perpetual calendar, which instantaneously changes around midnight. Instead of the typical sub-dial, the months are indicated via a ring around the entire dial, and read via a small gold pointer at six o’clock. 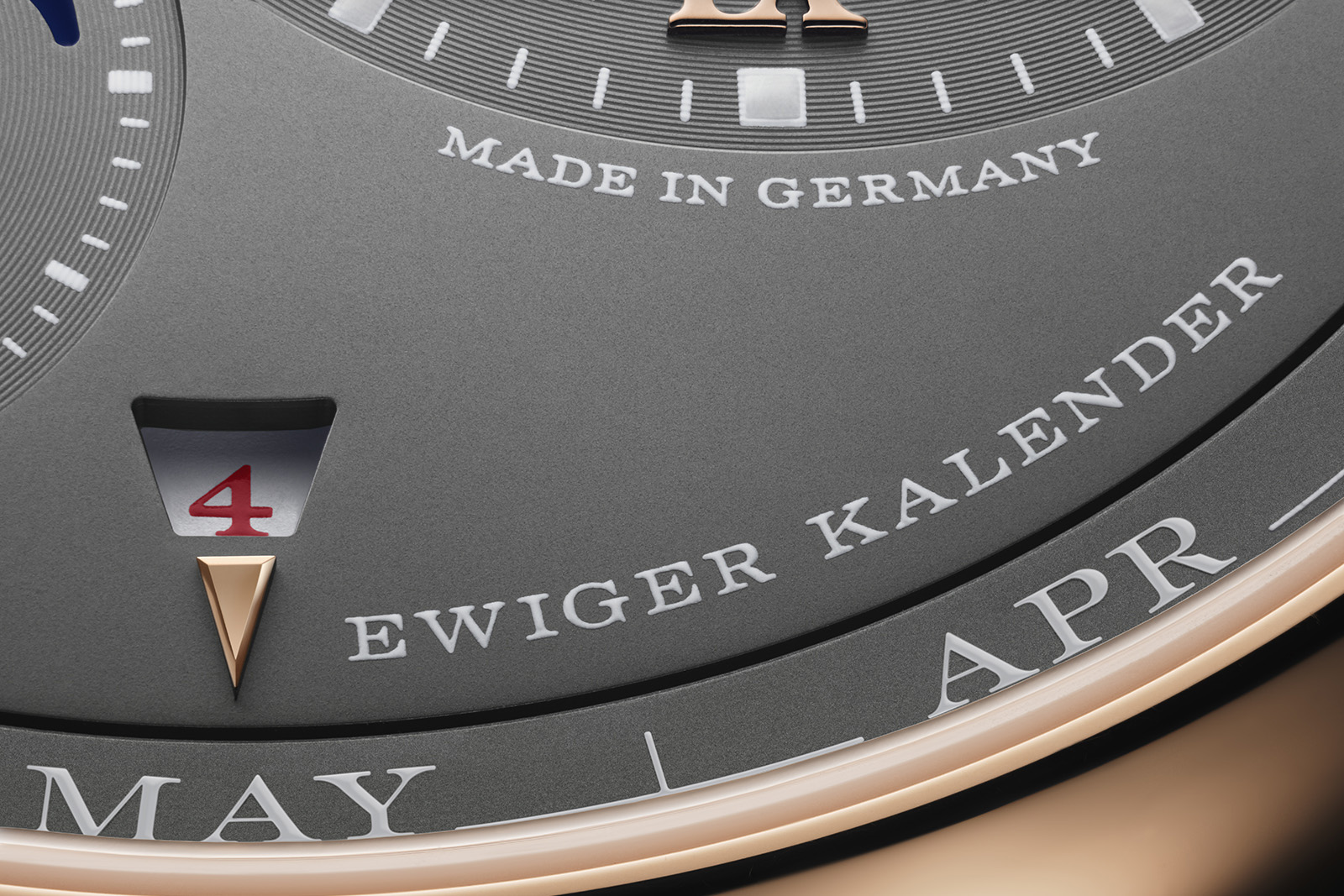 The layout isn’t new, being it is identical to its predecessor, but there are two distinct differences visible.

Most importantly, the day-night indicator is now integrated into the moon phase – a complication borrowed from the 2017 Lange 1 Moon Phase. Here the moon and disc are separate, with the disc changing colour to indicate the time of day.

While not the first brand to use such a display, Lange’s implementation of the concept is arguably the best, with the metallic blue disc behind the moon phase executed in a graduated colour to represent night and day. 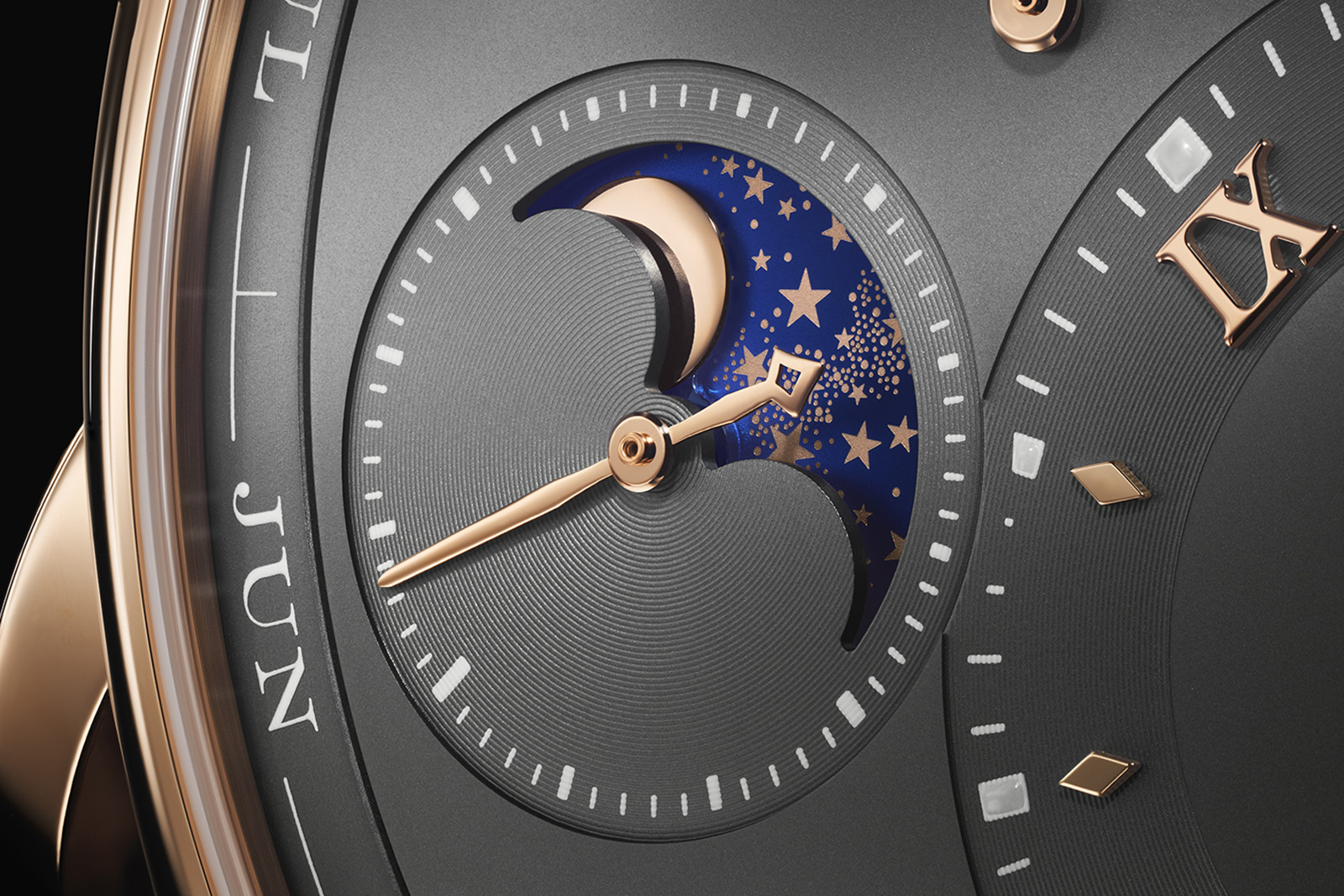 Also, the sub-dial for the hours and minutes have been redesigned to match the Lange 1 Moon Phase – the time display has a raised, flat central section surrounded by a recessed chapter ring with fine concentric engine-turning. And of course, the dial no no longer carries the “Tourbillon” inscription. 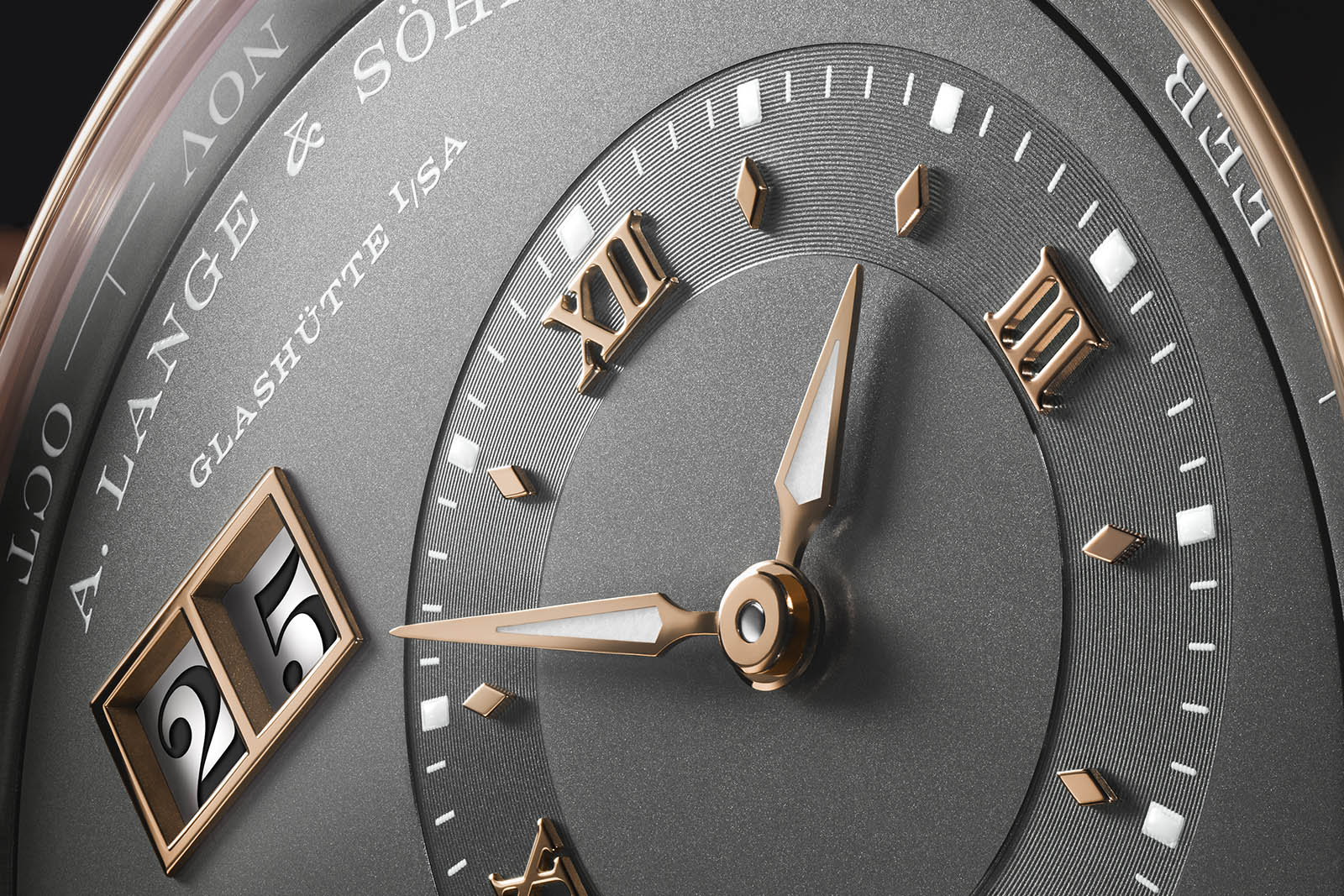 The Lange 1 Perpetual Calendar is powered by the new L021.3 – an automatic movement based on the movement in the Lange 1 Daymatic, which also served as a base for the tourbillon version. However, much like the recent Lange 1 Timezone that has a reworked movement similar to its base, the L021.3 is significantly different, both mechanically and visually. 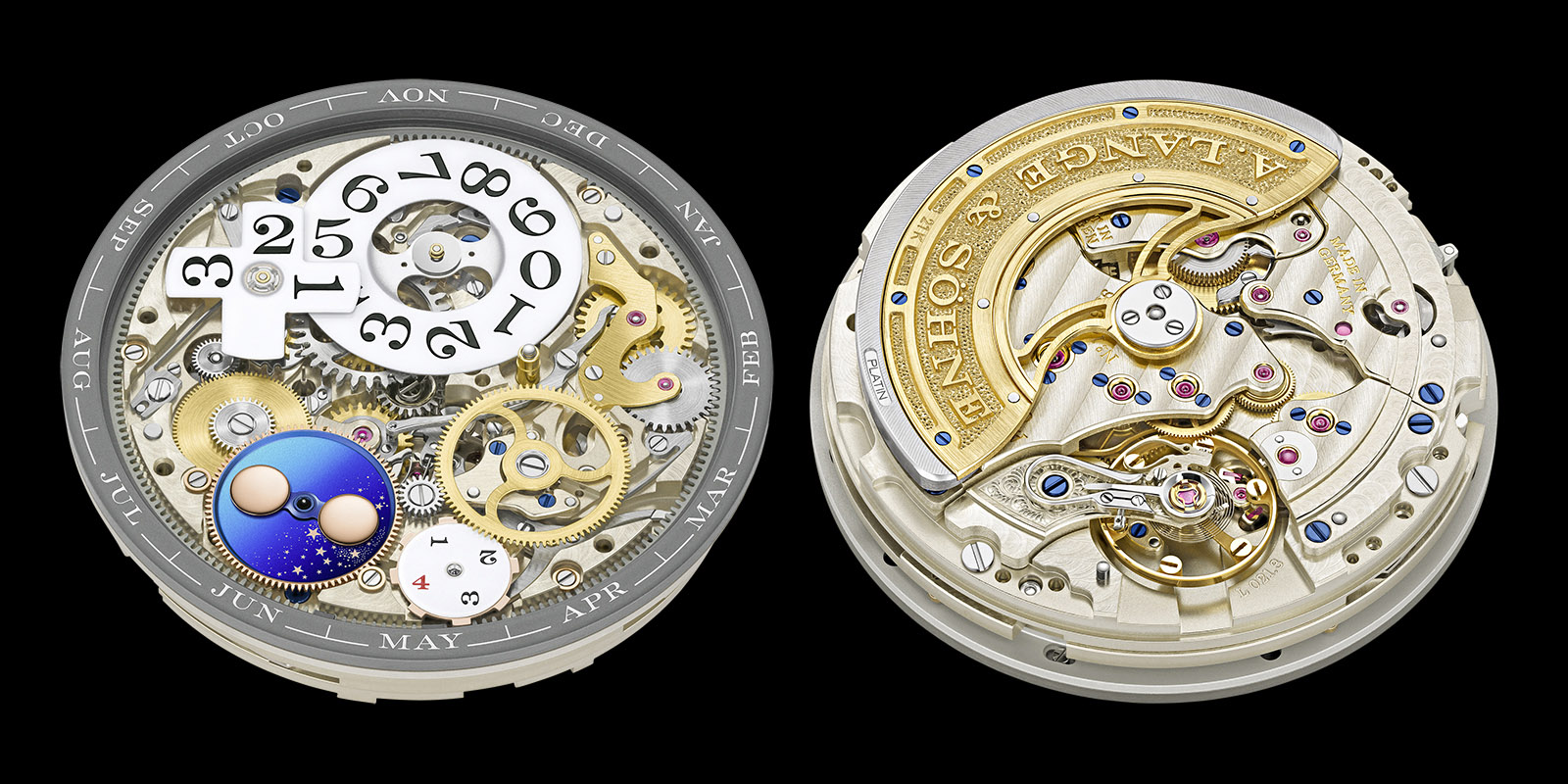 The perpetual calendar mechanism is integrated onto the base plate under the dial, and is virtually identical to the module on the tourbillon variant – a good thing because it is a technically unique and intriguing instantaneous perpetual calendar with an unconventional layout. The subtle difference between the two calendar mechanisms are the additional wheels to relocated the 24-hour sub-dial to the moon phase, so that it can serve as the day-night indicator.

The most notable difference is the rearranged going train, which now has the fourth wheel directly driving the seconds hand – the Daymatic instead had an indirectly-driven seconds – leading to a more straightforward, efficient gear train. Also, the unidirectional automatic winding mechanism has been redesigned. These changes lead to reshaped bridges, which are now less cluttered and expose more of the wheels underneath.

Like the Daymatic, the L021.3 still retains the gorgeous 21k gold rotor with a relief-hammered tremblage finish that’s rimmed in platinum. And there are five screwed gold chatons for the pivots of the main wheels, which are occasionally absent on some entry-level automatic Lange movements. 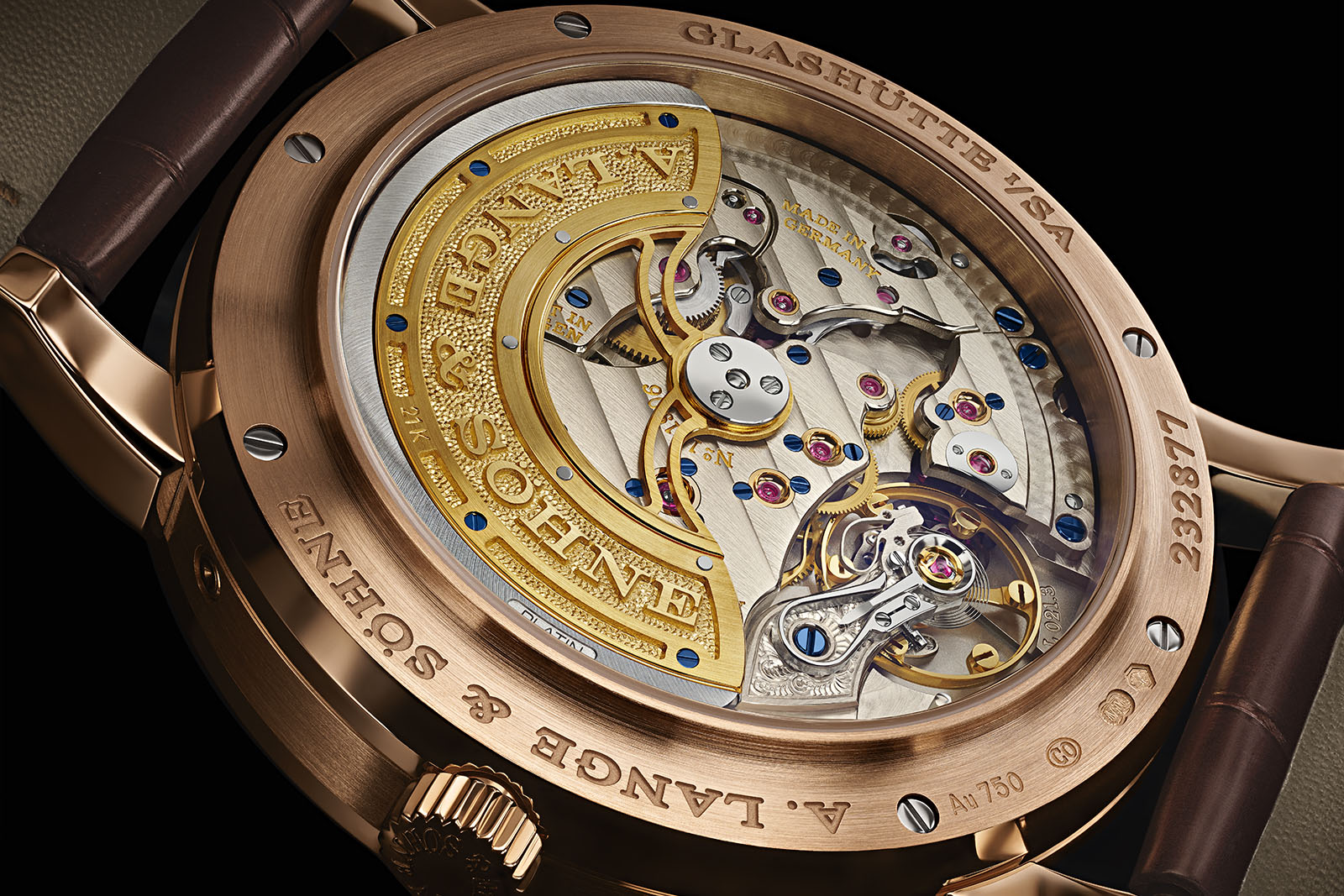