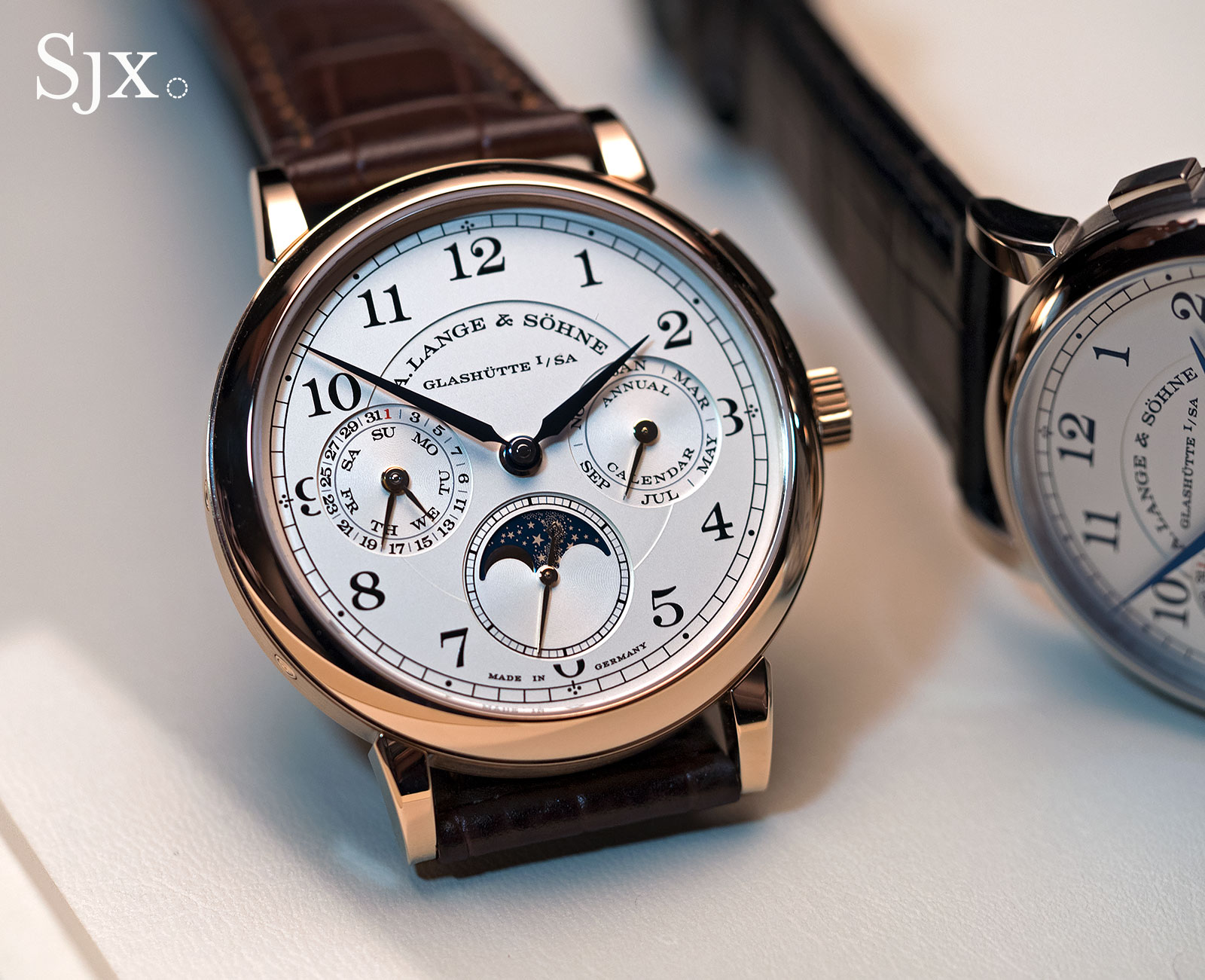 A. Lange & Söhne has introduced a string of entry-level-ish watches in the last couple of years, ranging from the time-only Saxonia Thin to the striking 1815 Chronograph in white and blue. The latest to join that small band of watches is the 1815 Annual Calendar that was unveiled at SIHH 2017.

While functionally identical to the Saxonia Annual Calendar that’s been in the catalogue since 2010, the new 1815 approaches the visuals differently, while also having a simpler, hand-wound movement. At 40mm in diameter and 10.1mm high, the 1815 Annual Calendar cuts an elegant figure on the wrist, being thin relative to its case diameter. While the Saxonia Annual Calendar and perpetual are slimmer, they are significantly smaller at 38.5mm in diameter, leaving them feeling thicker. Choices for the case metal are white gold (ref. 238.026) or pink gold (ref. 238.032). The 1815 Annual Calendar is only only Lange watch with a date display that isn’t the brand’s signature oversized date. Instead, it is a pointer date on the sub-dial at nine o’clock that also contains the day of the week display. While the pointer date is less obvious than the traditional digital display, it gives the watch a different look, one reminiscent of antique calendar pocket watches. Moreover, the pointer date allows the 1815 Annual Calendar to be its own watch. In contrast, the big date on the Saxonia Annual Calendar makes it look and feel like a budget version of the full-spec perpetual calendar. The month is on the sub-dial at three o’clock, along with “Annual Calendar” that serves as a visual counterweight to the other sub-dial, giving the dial a pleasing symmetry.

And the moon phase display at six o’clock is identical to that on Lange’s other calendar watches, meaning it is a disc of solid gold galvanically treated for a bright, rich blue finish. The dial, on the other hand, is a disc of solid silver, also a standard feature for Lange watches. But the hour and minute hands are blued steel, something rarely seen for the brand. Both the pink and white gold versions of the 1815 Annual Calendar have blued steel hands, which is yet another unusual feature since such hands are typically only found on white metal watches. Not only are the blued steel hands visually attractive, they are strongly legible. The result is a look that’s more utilitarian than that of the average Lange, especially since the dial has large Arabic numerals and a prominent minute track. The 1815 Annual Calendar scores well on functionality. Like all such complications, it can keep track of months with 30 or 31 days, so only needs to be adjusted once a year at the end of February.

That’s the purpose of the pusher at two o’clock – pressing the button advances all calendar indications simultaneously by one step. At the end of February it’ll take three or four (depending if it’s a leap year) pushes of the button to advance to March 1. Conventional recessed pushers on the other side of the case band exist for setting the calendar functions individually. The calibre inside is the L051.3, which is a variant of the movement that’s also inside the time-only 1815 (with the L051.1) and the 1815 Up/Down (L051.2). It’s manually-wound, often an inconvenience for a calendar watch, but fortunately has a 72-hour power reserve, so the watch will keep running for at least a weekend before it stops. Despite being an entry-level complication, the movement still has all the features synonymous with Lange, namely the German silver three-quarter plate, jewels in chatons, and an engraved balance cock. The exposed crown and ratchet wheels are unusual for a Lange movement though, with only a handful of other calibres constructed that way. Despite being different the finish is still up to par, with the exposed wheels having bevelled and polished teeth. Compared to the Saxonia Annual Calendar, the 1815 version is a attractive value proposition. It’s priced at €37,500 in both white or rose gold, almost €10,000 less than the Saxonia model.

The 1815 Annual Calendar reaches Lange boutiques and retailers towards the end of the third quarter of 2017.