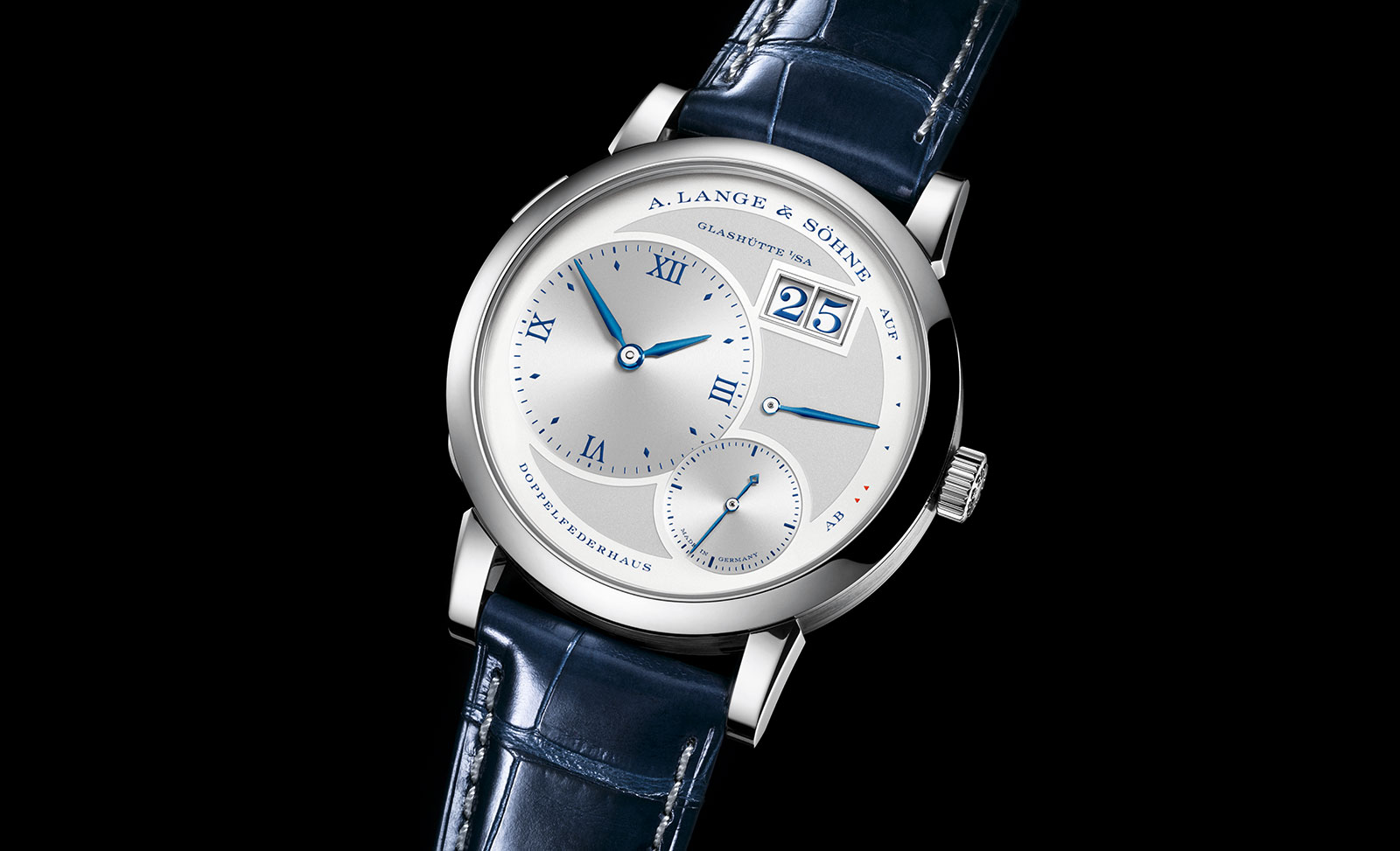 One of the rare handful of watches that have become modern day icons, the Lange 1 is literally the face of A. Lange & Söhne, so its 25th anniversary isn’t going to pass by quietly; the 20th anniversary in 2014 saw the introduction of both the Lange 1 Tourbillon Handwerkskunst and the Lange 1 anniversary his-and-hers sets. Lange has just announced the Lange 1 “25th Anniversary”, a classic, 38.5mm Lange 1 with several unusual tweaks inside and out.

The anniversary model has a two-tone, two-level silver dial with blue markings, a colour combination found on a handful of past Lange 1 models. But unique to the 25th anniversary edition: segments of the dial have been gently recessed and finished with a darker, frosted finish, highlighting the asymmetry of the dial. All of the markings on the dial are printed in dark blue, including the numerals of the date discs. The movement boasts a 72-hour power reserve, adjustable mass balance wheel, and an instantaneously changing date. But it also features an extra decorative touch: the hand-engraving on the balance cock incorporates a “25” in the style of Lange’s date display, with the lines of the engraving filled in dark blue lacquer. The balance cock itself is German silver, as is standard, and not solid gold, as has been done for other limited edition. The third element unique to the 25th anniversary edition is the hunter case back, something only found on a handful of Lange limited editions, including the 1815 Rattrapante Perpetual Calendar Handwerkskunst. Constructed in a similar fashion to the hinged lid on the 1815 Handwerkskunst, the cover is made of 18k white gold, pivoted at 12 o’clock and opened with the tab at four o’clock.

It bears a hand-engraved rendering of Lange headquarters located at Ferdinand-Adolph-Lange-Platz 1 in Glashütte. Located at one corner of a T-junction, the building became the company’s in 1873, and though the premises were nationalised after the second world war, Lange Uhren regained it in the 1990s. And flanking the engraving of the building are the names of Gunter Blümlein and Walter Lange, the two men crucial to the re-establishment of Lange in 1990.

Notably, this is the only 25th anniversary model that is sold individually, with the others being sold in a 10-piece set.