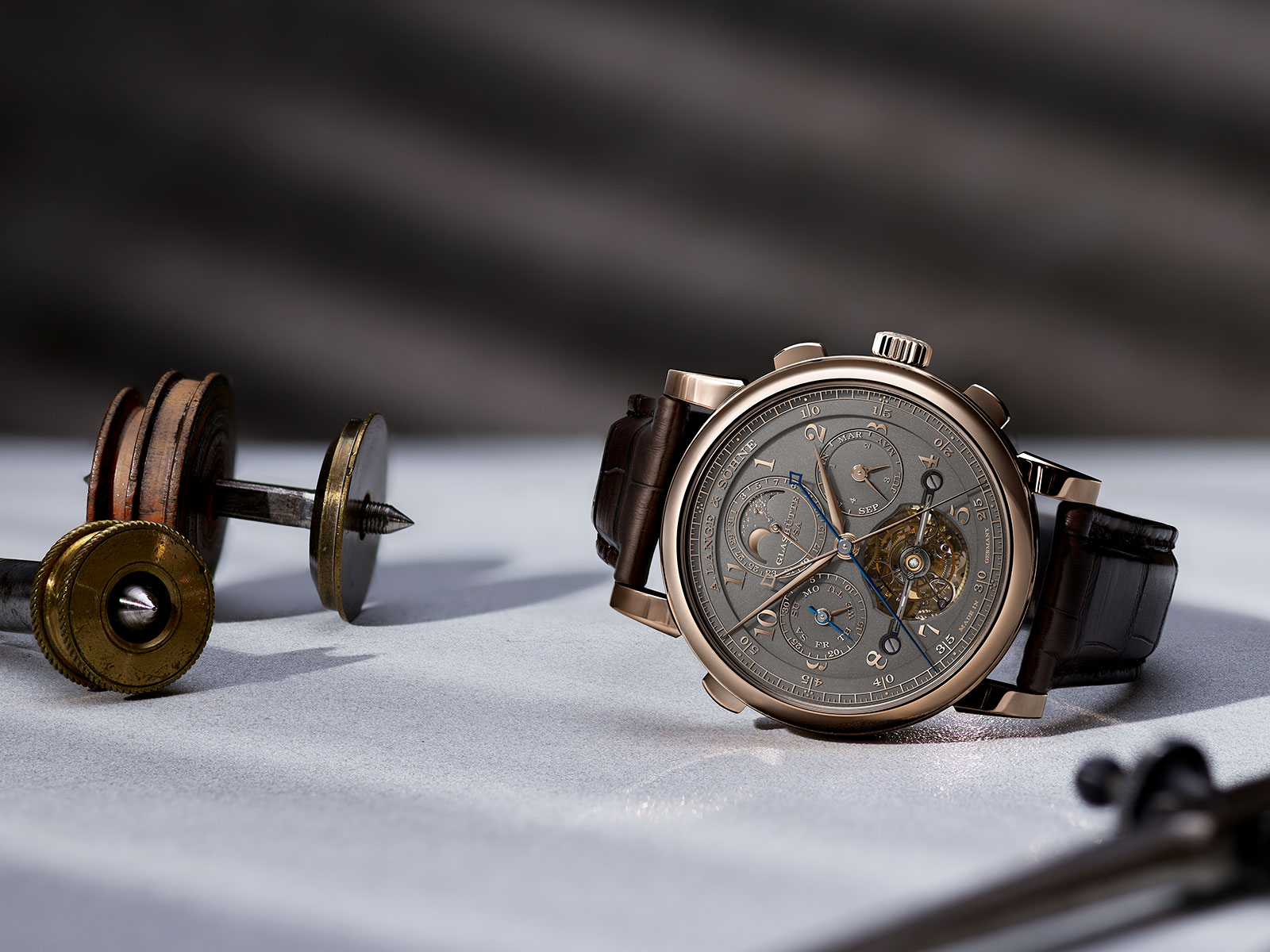 Conceived to mark the brand’s founding in 1845 by Ferdinand Adolph Lange, the “Homage to F. A. Lange” 175th Anniversary collection is the centrepiece of A. Lange & Söhne’s debuts at Watches & Wonders 2020 in Shanghai.

The commemorative line up is made up of three watches – spanning the price spectrum – all featuring Honeygold cases, special movement decoration, as well as dials that are new in either colour or material. And appropriately for the occasion, all three are from the 1815 line – named after the birth year of F. A. Lange –  that is characterised by a pocket watch-inspired aesthetic with Arabic numerals.

The flagship of the anniversary collection is the Tourbograph Perpetual Honeygold “Homage to F.A. Lange”, a 50-piece limited edition variant of one of the most complex wristwatches made by Lange – it’s detailed below.

The other two watches are explained in separate stories: the 1815 Rattrapante Honeygold, and the more affordable 1815 Thin Honeygold. 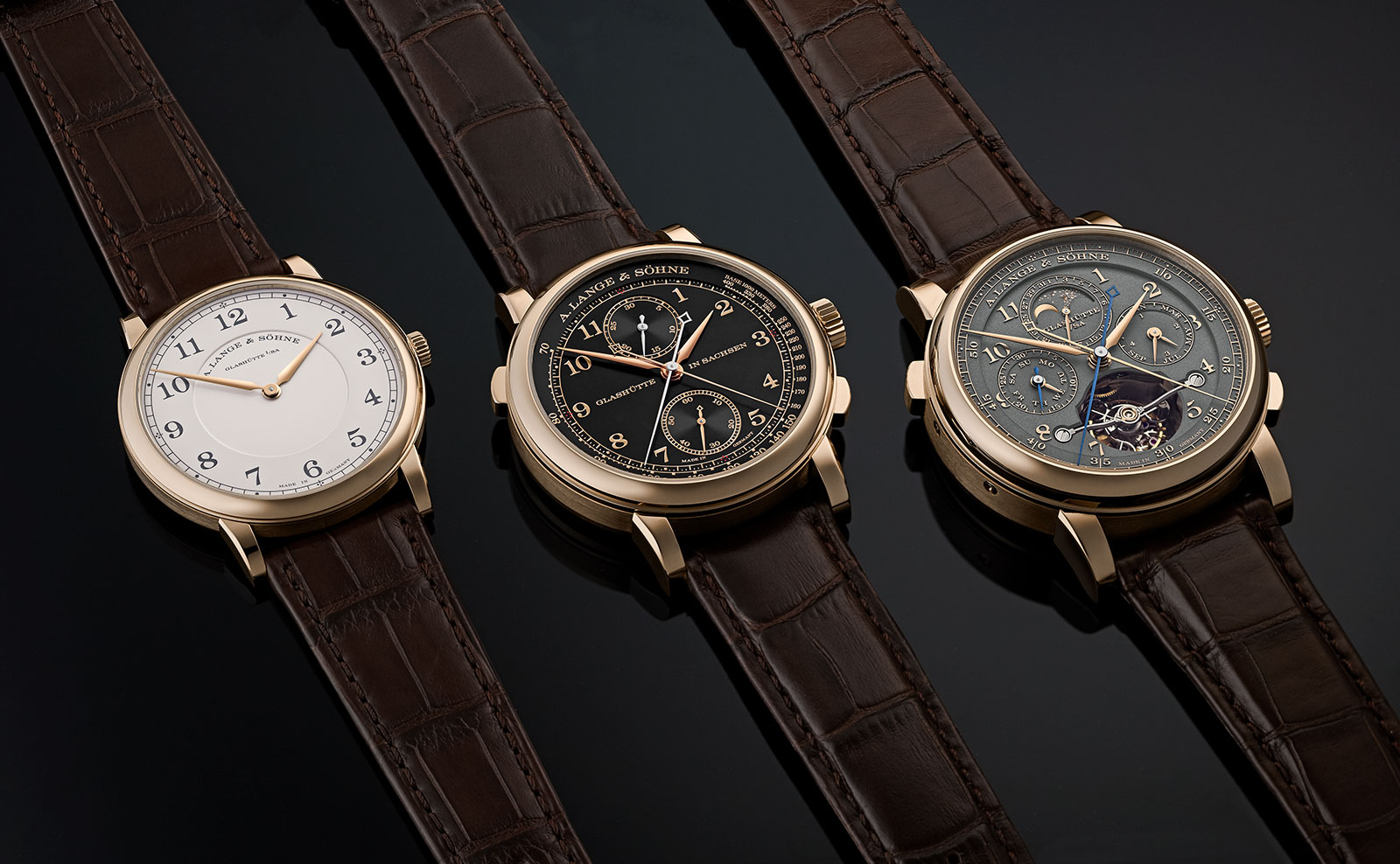 As with the 165th anniversary watches of 2010, the new commemorative trio is entirely in Honeygold – including a Honeygold dial for the Tourbograph Perpetual. A gold alloy exclusive to Lange, Honeygold is a cross between rose and yellow gold.

Because of its difficult nature, the metal has only ever been used for limited-edition watches because of its scarcity and price. According to Lange product development chief Anthony de Haas, its properties make Honeygold as difficult to work as platinum – drill bits used to machine the Honeygold cases wear out at the same rate as those for platinum.

Though all three share the same case material, each has a strikingly divergent dial style, ranging from white enamel on the 1815 Thin to an uncommon black dial for the split-seconds.

On the reverse, they are naturally different but a similar decoration created for the anniversary editions. Instead of the conventional striping and gilded markings, the movements have a frosted finish with the engraving and markings filled in dark grey “black rhodium”. And the hand engraving on the balance cocks is also done differently, made up of slimmer, more spread out curlicues. 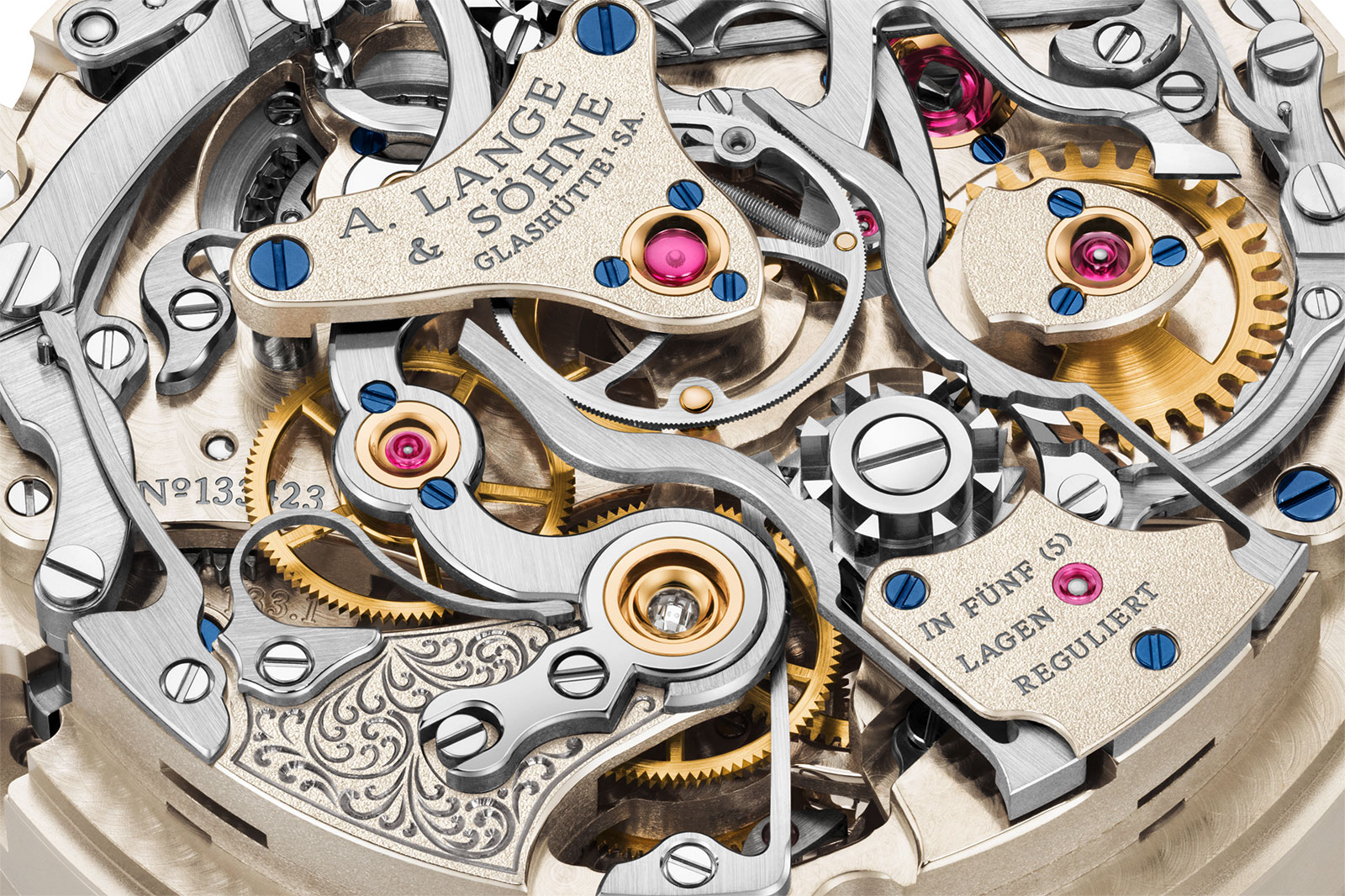 All three anniversary watches are variations of existing models, but they are distinct enough to be special. Ordinarily I am not a fan of facelifts for commemorative editions, but these watches are smartly done – effort was put into making them genuinely different – especially for the split-seconds and extra-thin.

And in an unusual move for a commemorative series, each watch has a different dial – there is no single unifying look as there was for the Lange 1 anniversary set – which makes them more interesting as a set. One can conceivably buy all three and still have significant variety in style and function – Lange has indicated the three are available as a set. 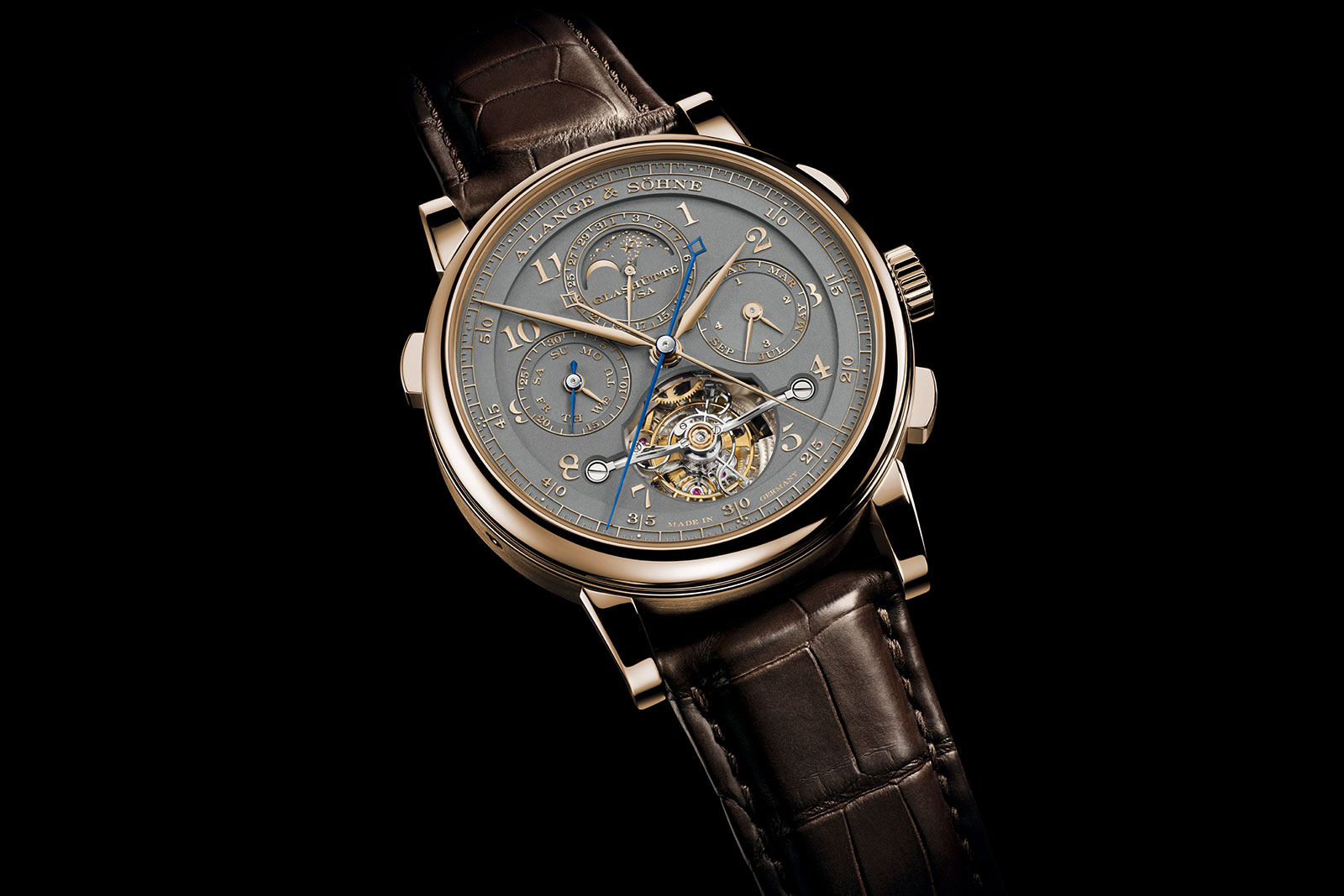 That said, the new edition of the Tourbograph Perpetual makes it feel like there are too many versions of the ultimate Lange watch; this brings the tally to four, including the original version sans perpetual calendar.

With a dial made of solid Honeygold, a first for the brand, the Tourbograph Perpetual Honeygold is impressive in mechanics and materials.

The dial is frosted Honeygold that’s been treated with “black rhodium”, giving it a dark grey finish. All of the raised elements are one and the same with the dial, which has been machined to create the relief numbers and letters. The raised portions of the dial are then polished to remove the black-rhodium plating, revealing the Honeygold beneath. 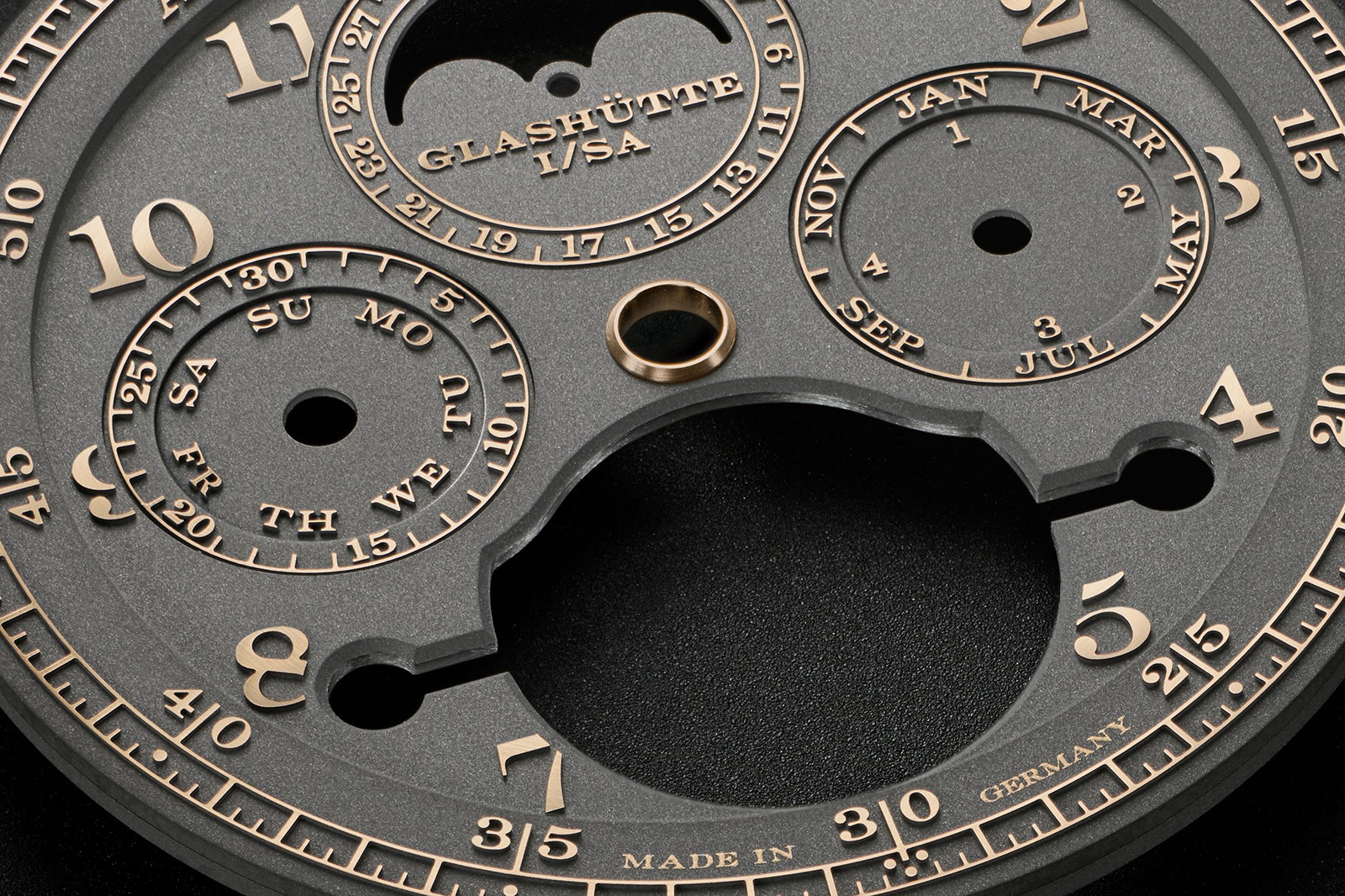 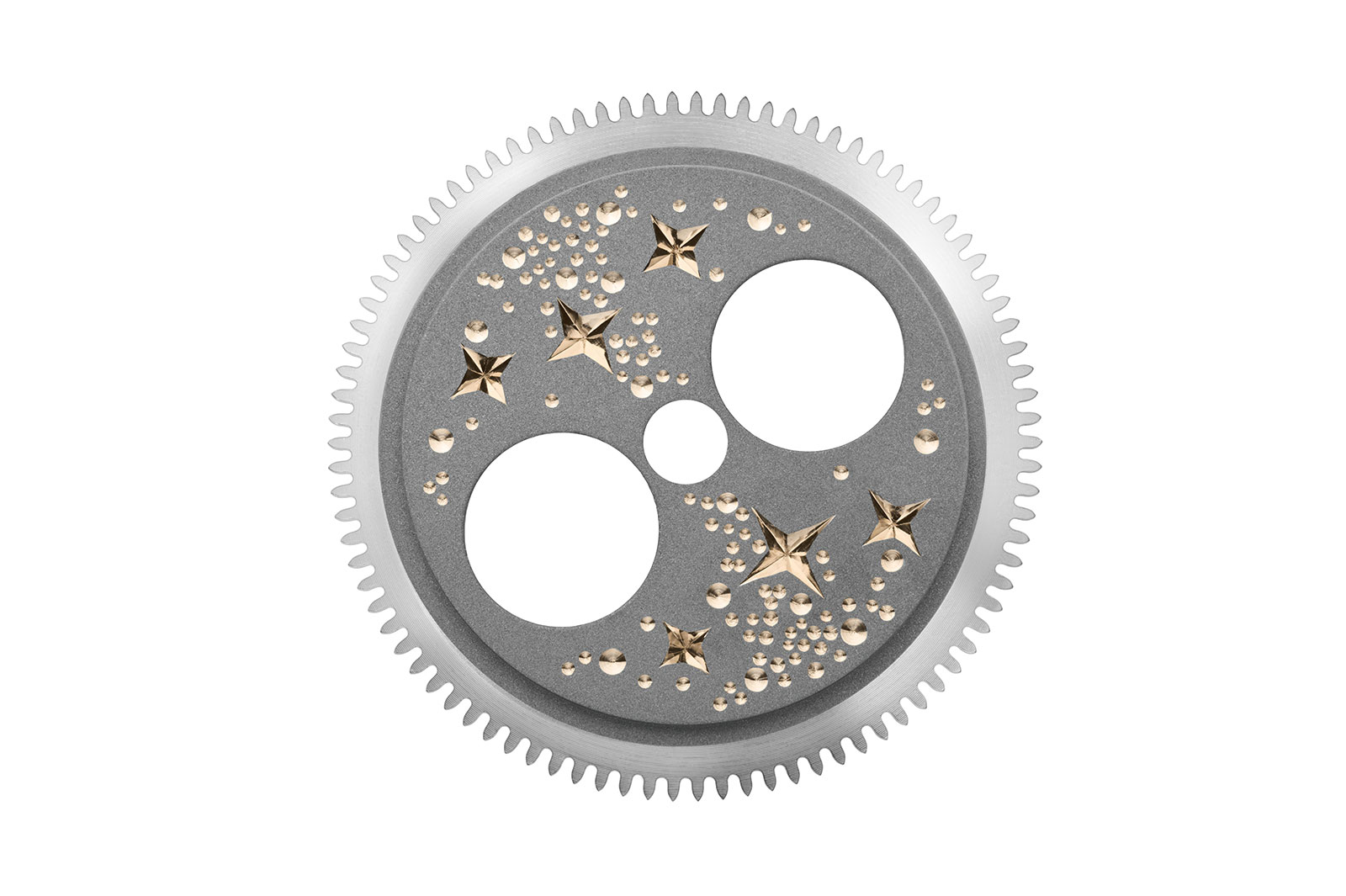 Also made of Honeygold is the moon phase disc 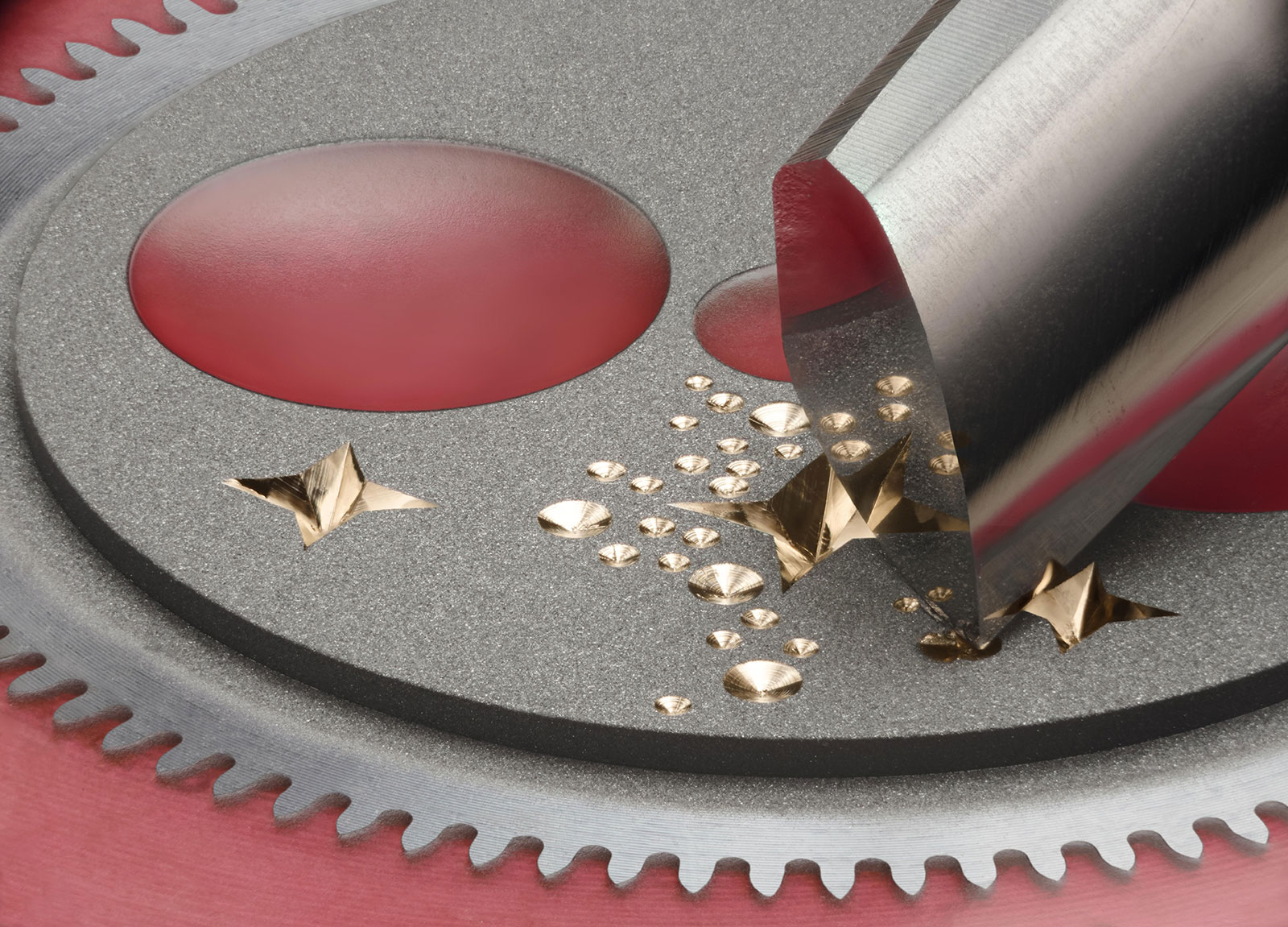 While the relief dial is done by machine, the moon phase disc is hand engraved

It’s powered by the L133.1, one of the most complicated movements made by Lange. The calibre incorporates a split-seconds chronograph, tourbillon, chain and fusee, as well as a perpetual calendar. 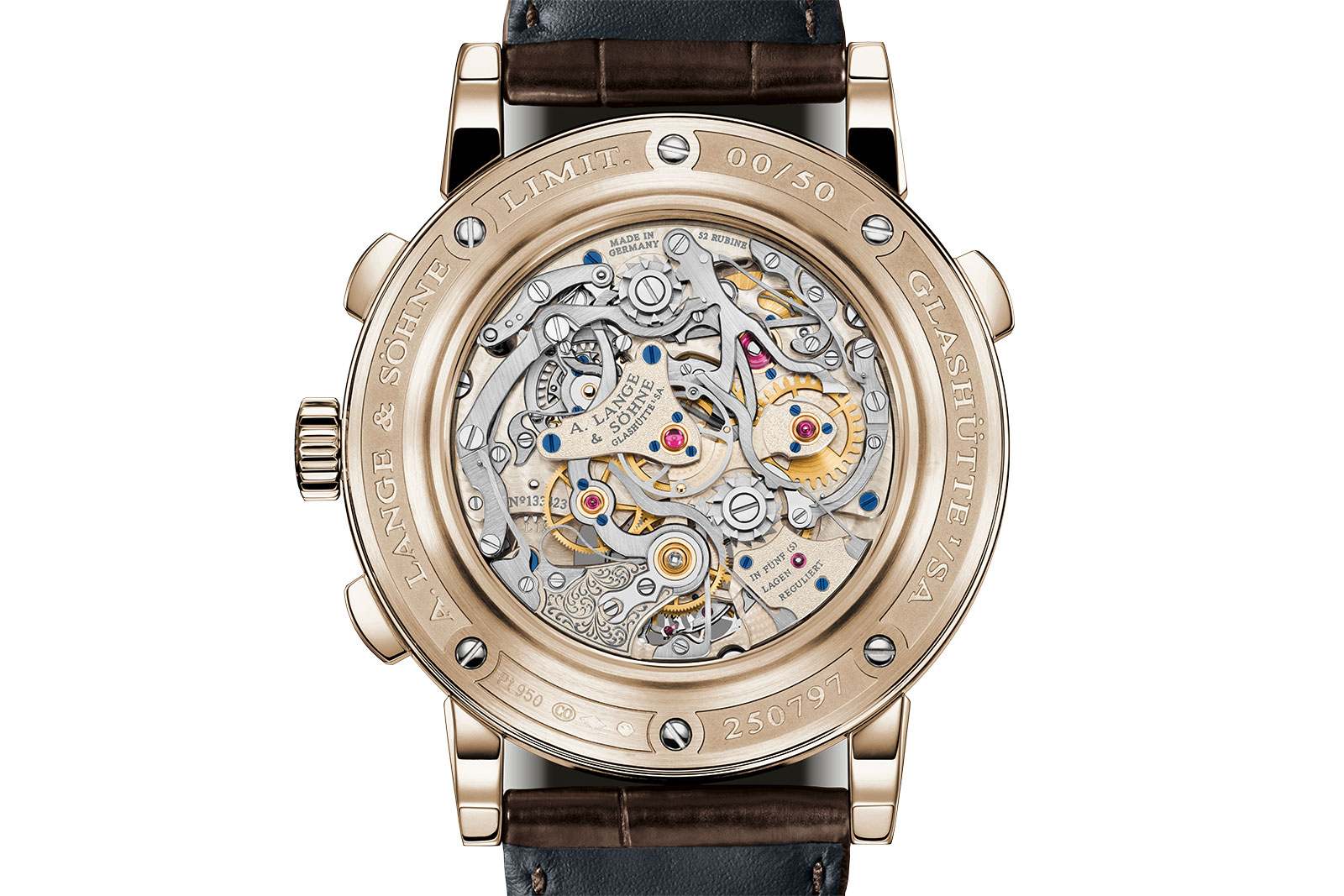 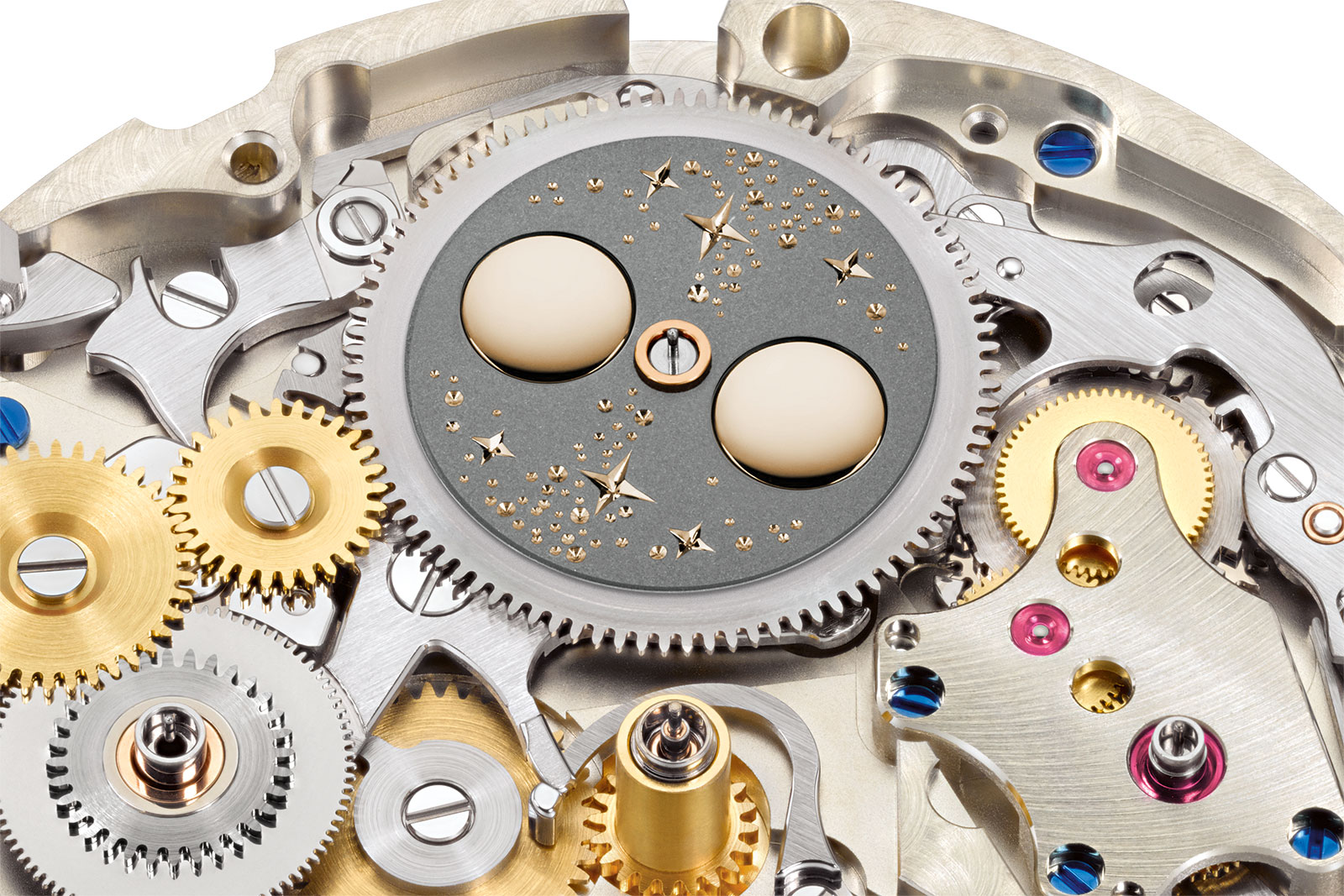 Because the perpetual calendar is an additional mechanism on the front of the movement, the tourbillon bridge has to dip downwards to secured the central axis of the tourbillon. This requires more complex hand finishing, but isn’t especially attractive visually since it is at odds with the relatively linear and formal style of the movement. 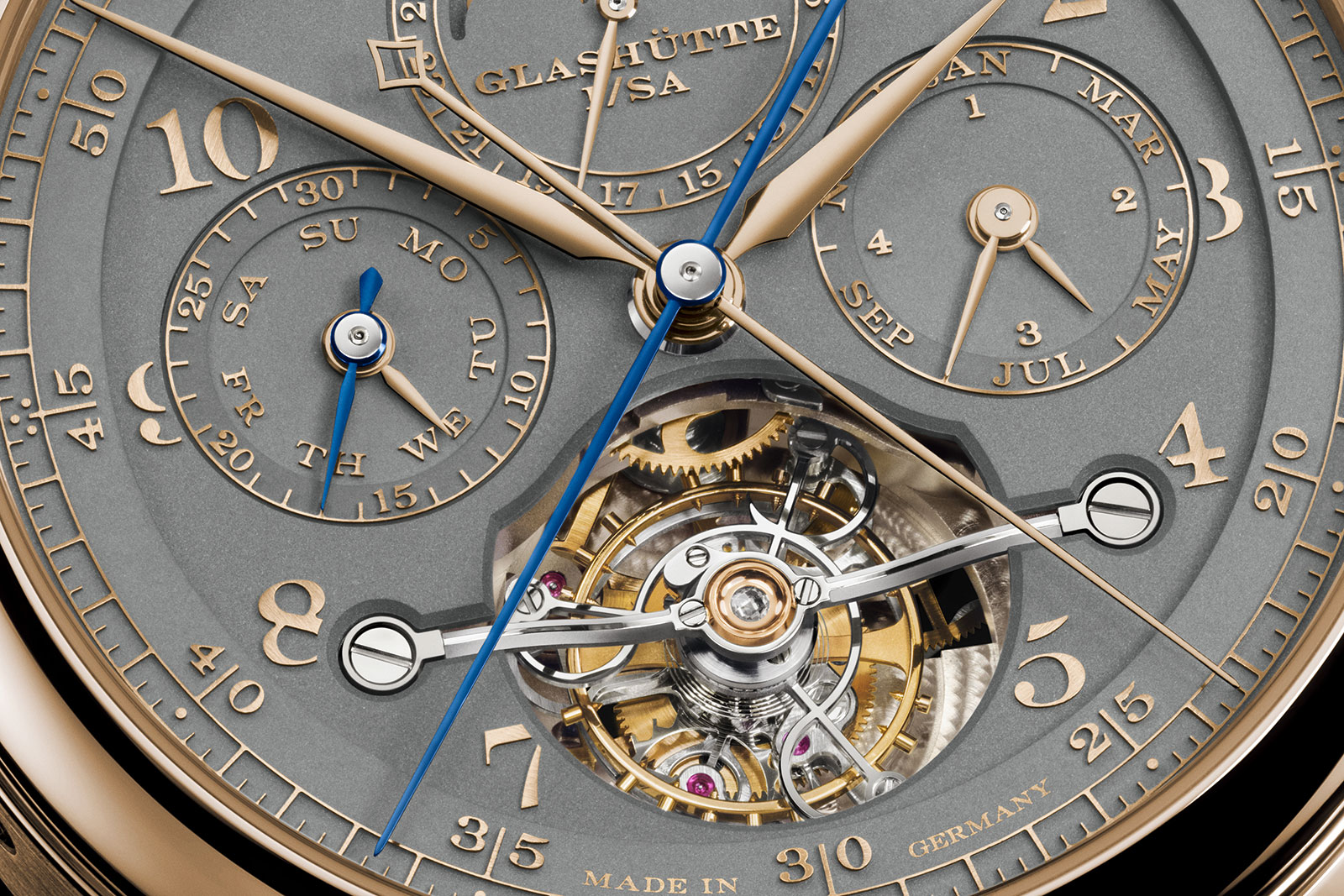