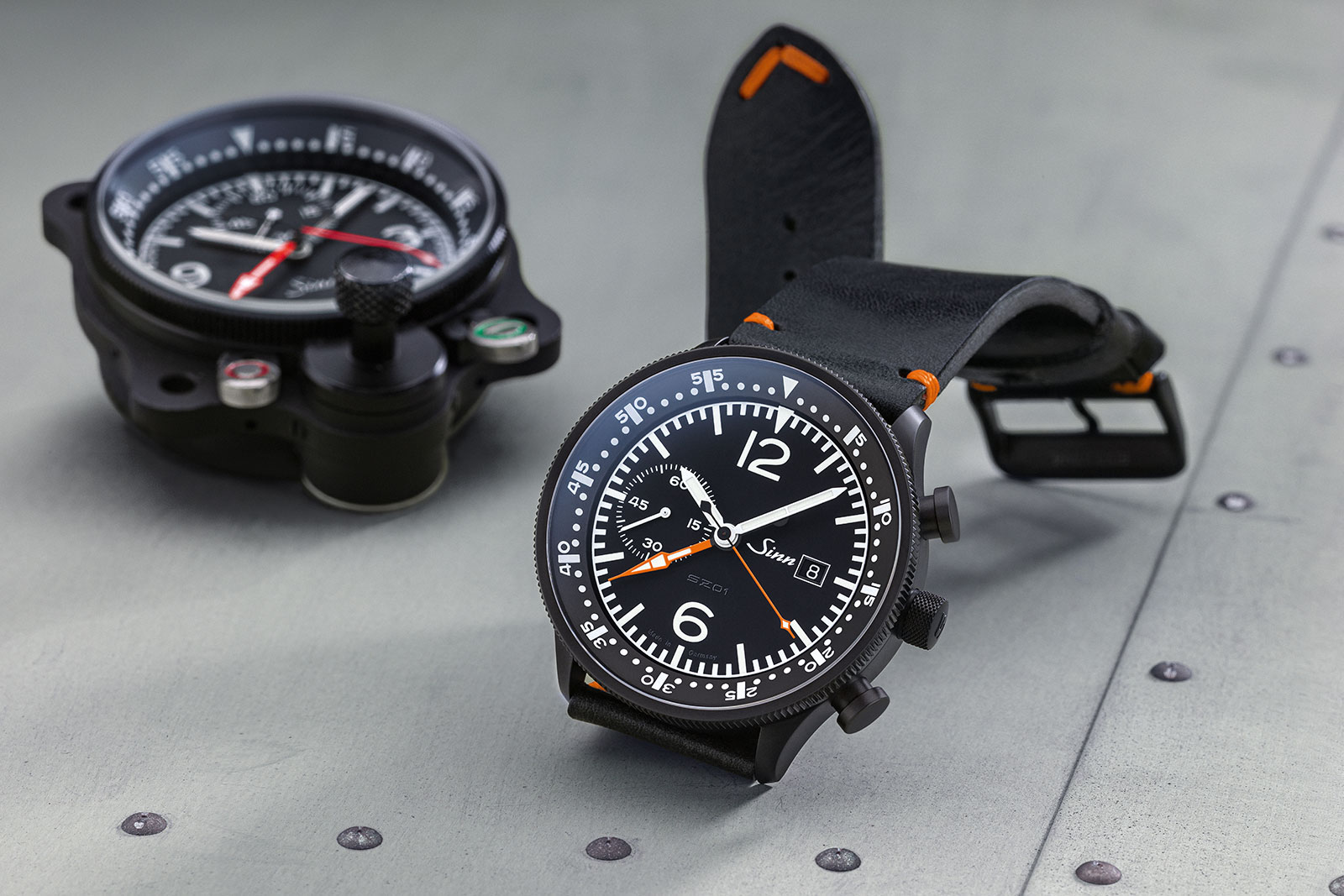 In the era before electronic timekeeping, fighter pilots relied on mechanical navigation clocks on their instrument panels known as navigationsborduhr, or NaBo for short.

Sinn got its start making instruments and watches for pilots and planes, and one of its earliest products was the NaBo 17 ZM made for the Tornado fighters of the Luftwaffe in the 1970s (which remain in service today). Now Sinn has reimagined the NaBo 17 ZM for the wrist, creating the 717, a massive chronograph powered by the proprietary SZ01 movement. The historical basis of the 717 is impeccable, and Sinn has managed to translate much of the cockpit clock feel into the wristwatch, right down to the details like the “pump” pushers and knurled crown that resembles those on the NaBo 17 ZM.

The 717 is impressive in the manner that most of Sinn’s “tool” watches are – it is perfectly legible and the case is virtually scratch-proof – but it also seems way larger than necessary. At 45 mm by 15.3 mm it is massive on both counts, and will probably feel extremely chunky on the wrist.

Priced at a bit over or under US$5,000 depending on the strap, the 717 sits at the high end of Sinn’s offerings, but is priced similar to other watches with the SZ01 movement. It’s fair enough, though the size will not be for everyone. 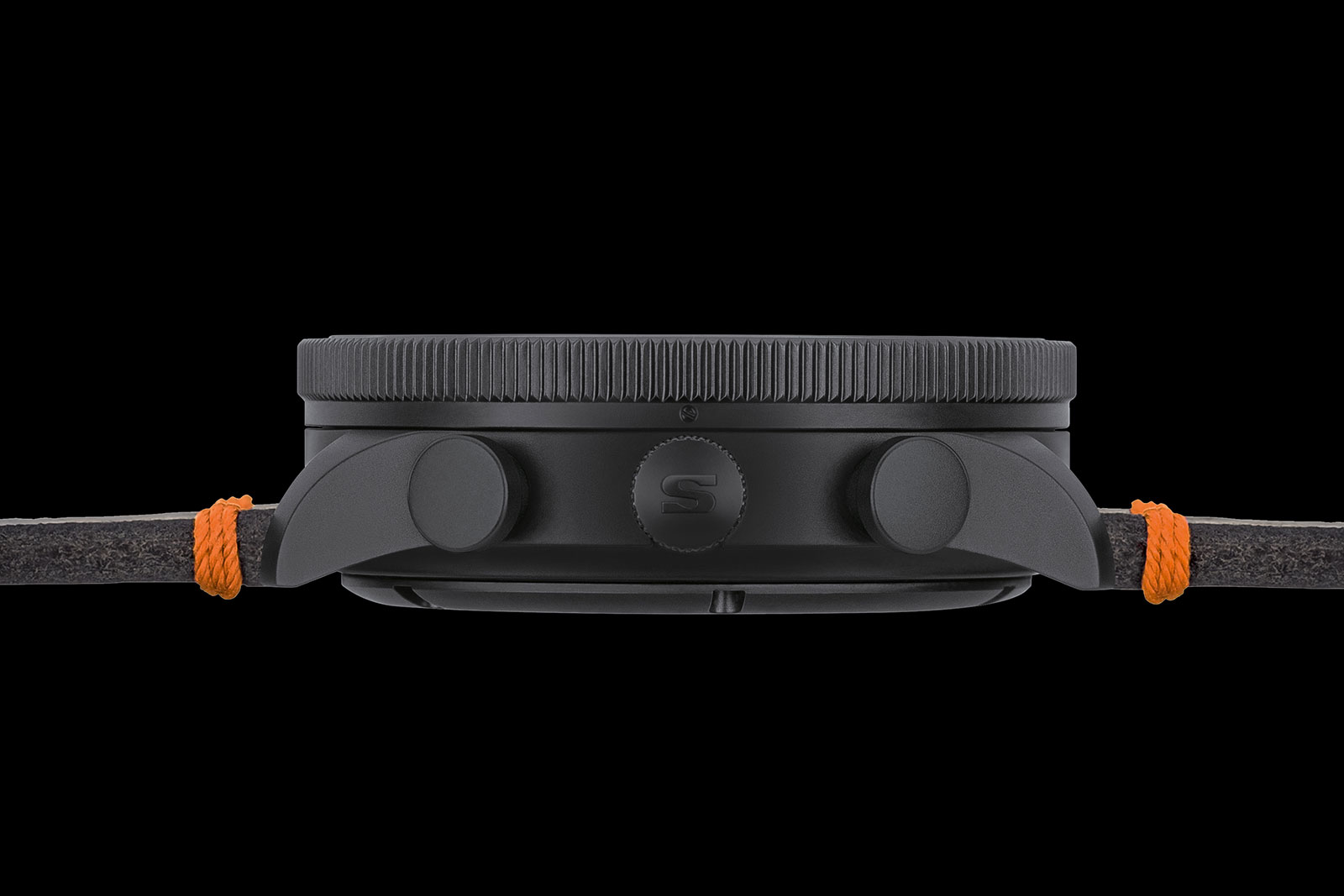 A lot of bezel

Clock on the wrist

The dial of the 717 stays faithful to the NaBo 17 ZM, most notably with the extra-large, central hand in orange for elapsed minutes. It does have the addition of a date, which surprisingly blends in well with the instrument-panel look.

One reason for the thickness of the case is the height of the bezel – almost as wide as the case middle – which is required to accommodate its steeply sloped inner flange, exactly as found on the NaBo 17 ZM. Its adherence to the original’s design is admirable, but the result is an extremely tall case. 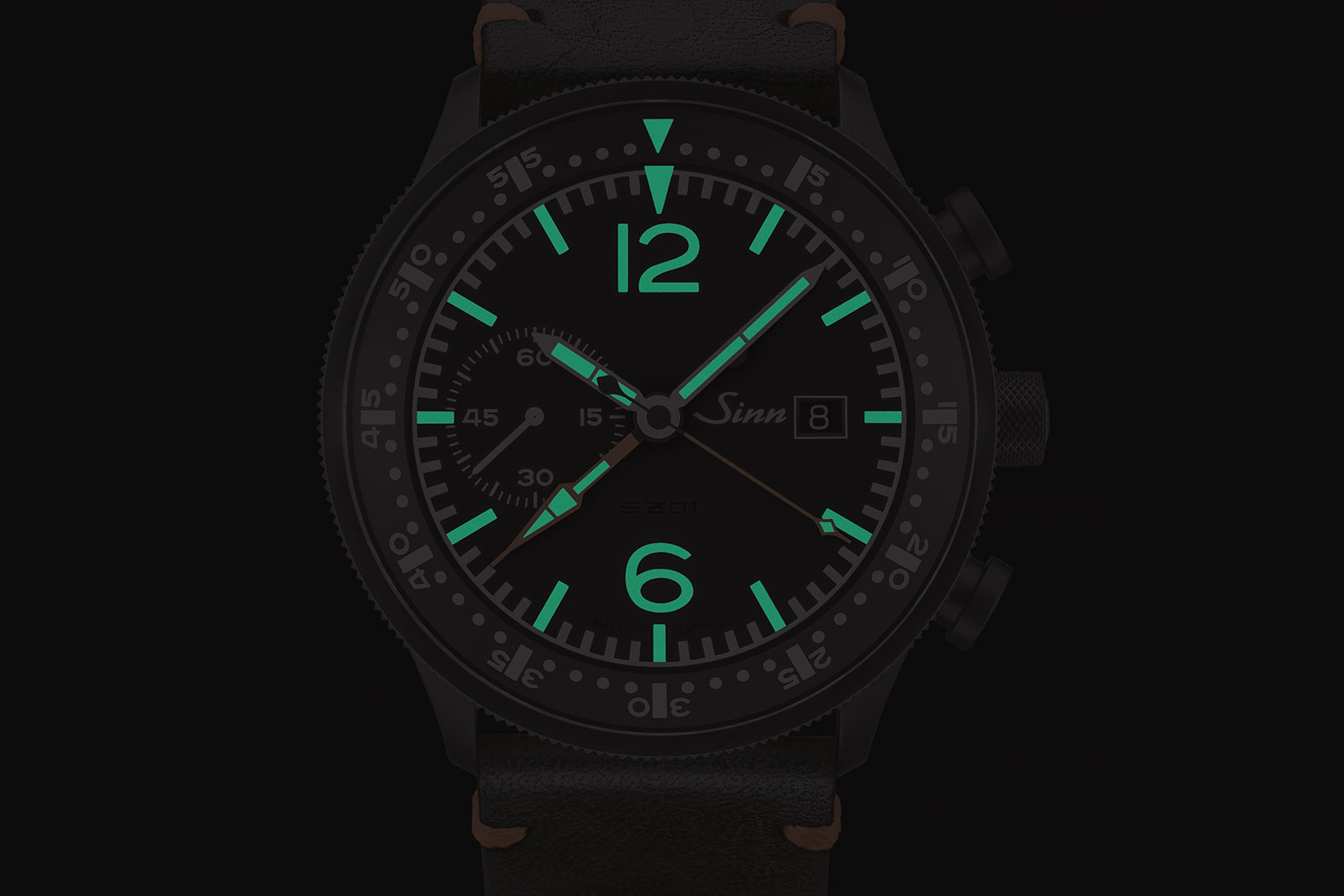 The case is steel that’s been treated with both Tegiment and a black hard coating, creating a surface that’s scratch resistant. Better known as the Kolsterising treatment for automobile parts, Tegiment diffuses carbon into the surface of the steel, giving it a hardness of several times conventional stainless steel. The hardness is then enhanced with a black ceramic-type coating, which is itself scratch proof. 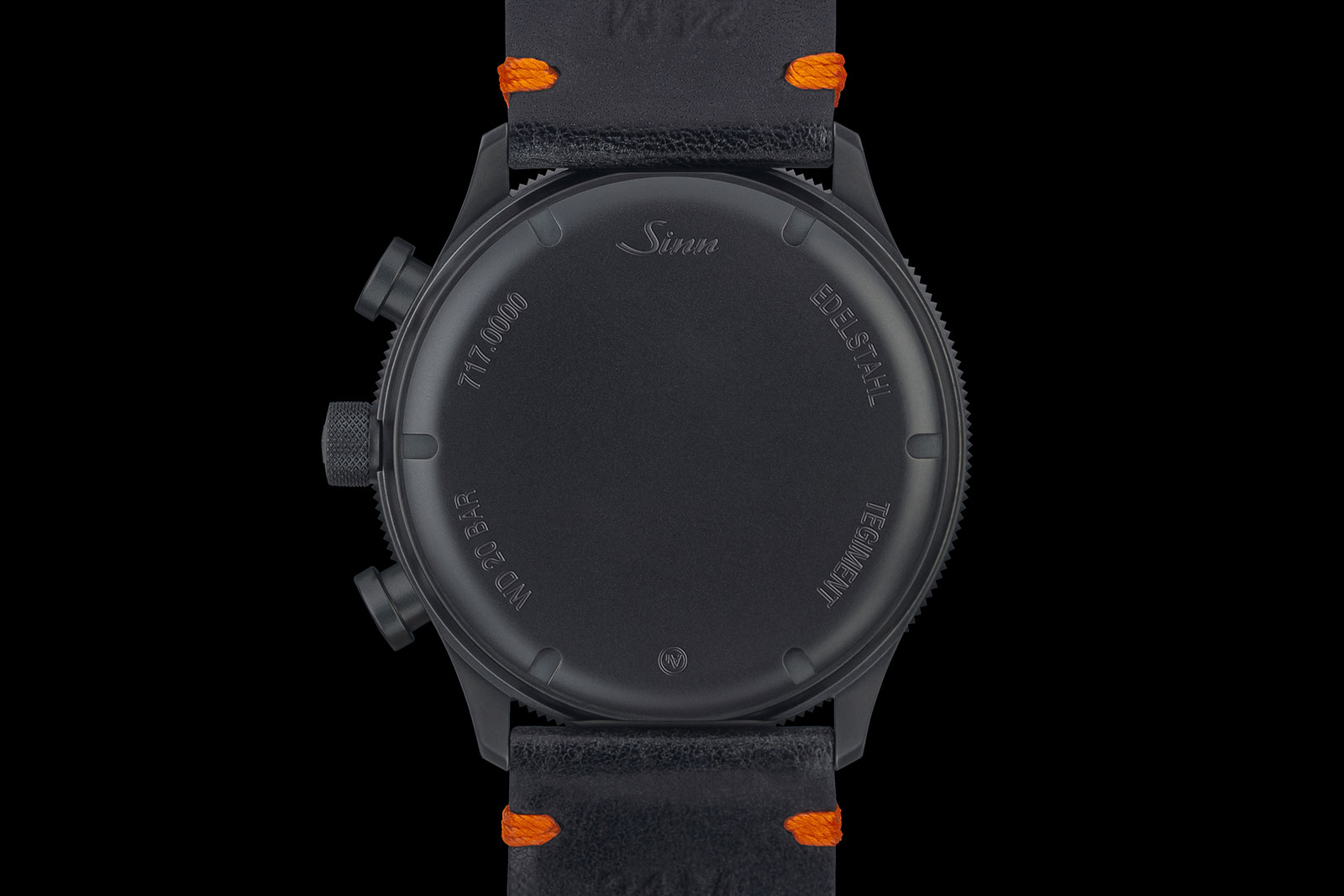 Under the solid case back is the SZ01, a movement that began as a standard Valjoux 7750 but has been transformed by Sinn to have a central elapsed minute register. Also found in the EZM 1.1, the SZ01 allows Sinn to reproduce the dial layout of historical timepieces like the NaBo cockpit clocks and EZM 1, which featured central chronograph counters to maximise legibility. 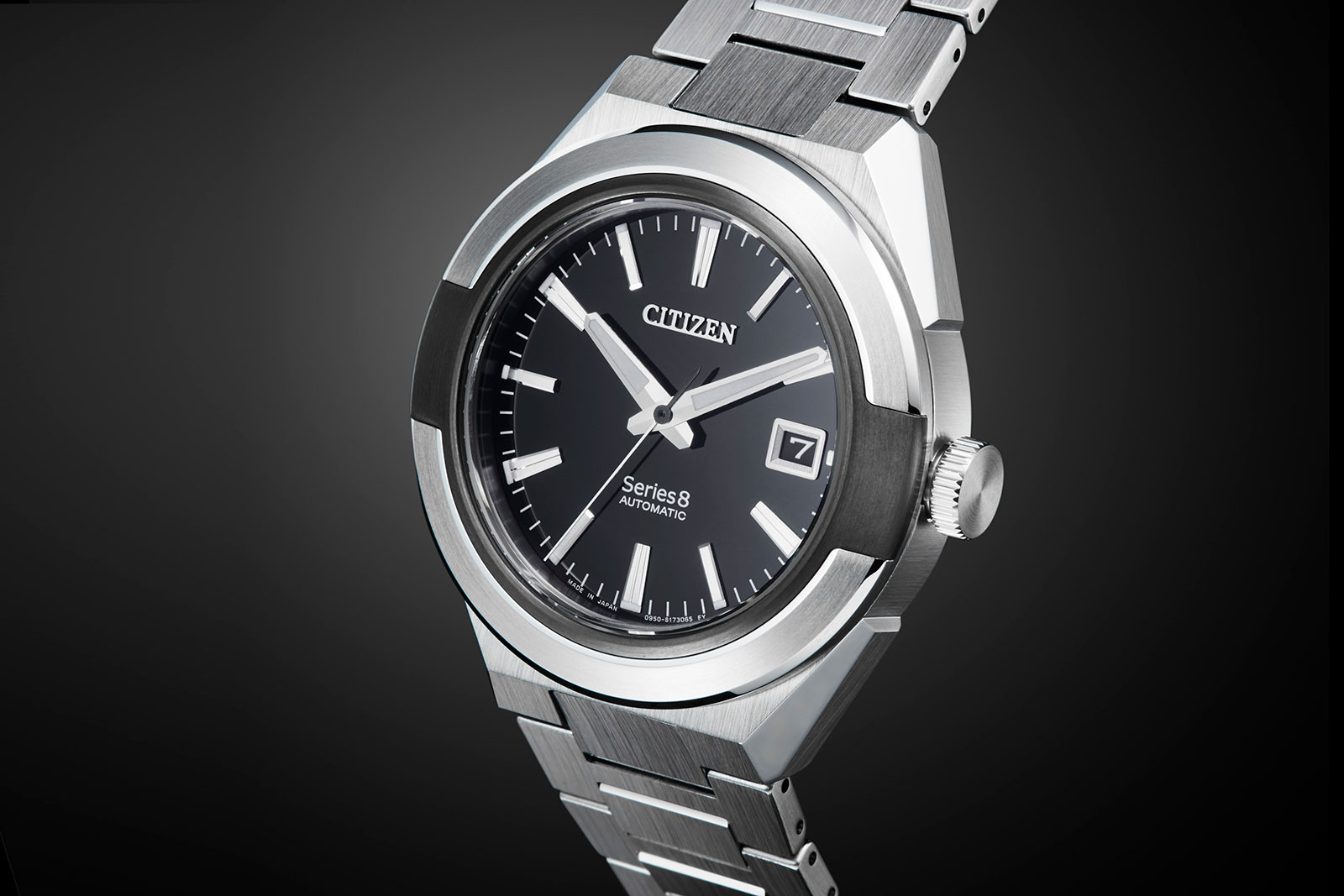 Unveiled alongside the flagship The Citizen Caliber 0200, the Series 8 is a line of affordable, integrated-bracelet sports watches equipped with slim automatic movements that have increased magnetism resistance. The Series 8 is made up of three sub-collections: the 870, 830, and 831. All are similar, but have different case and dial constructions, as well as different movements, but are all accessibly priced affordable, starting at $1,200 for the 831 and rising to US$2,000 for the 870.

The Series 8 is essentially a luxury-sports watch done accessibly – the case is angular and faceted, with both brushed and polished surfaces finishes, while the bracelet is integrated. While the styling brings to mind several other well-known watch designs, the Series 8 watches are not outright copies, which is a good thing, especially at this price range where originality harder to find. 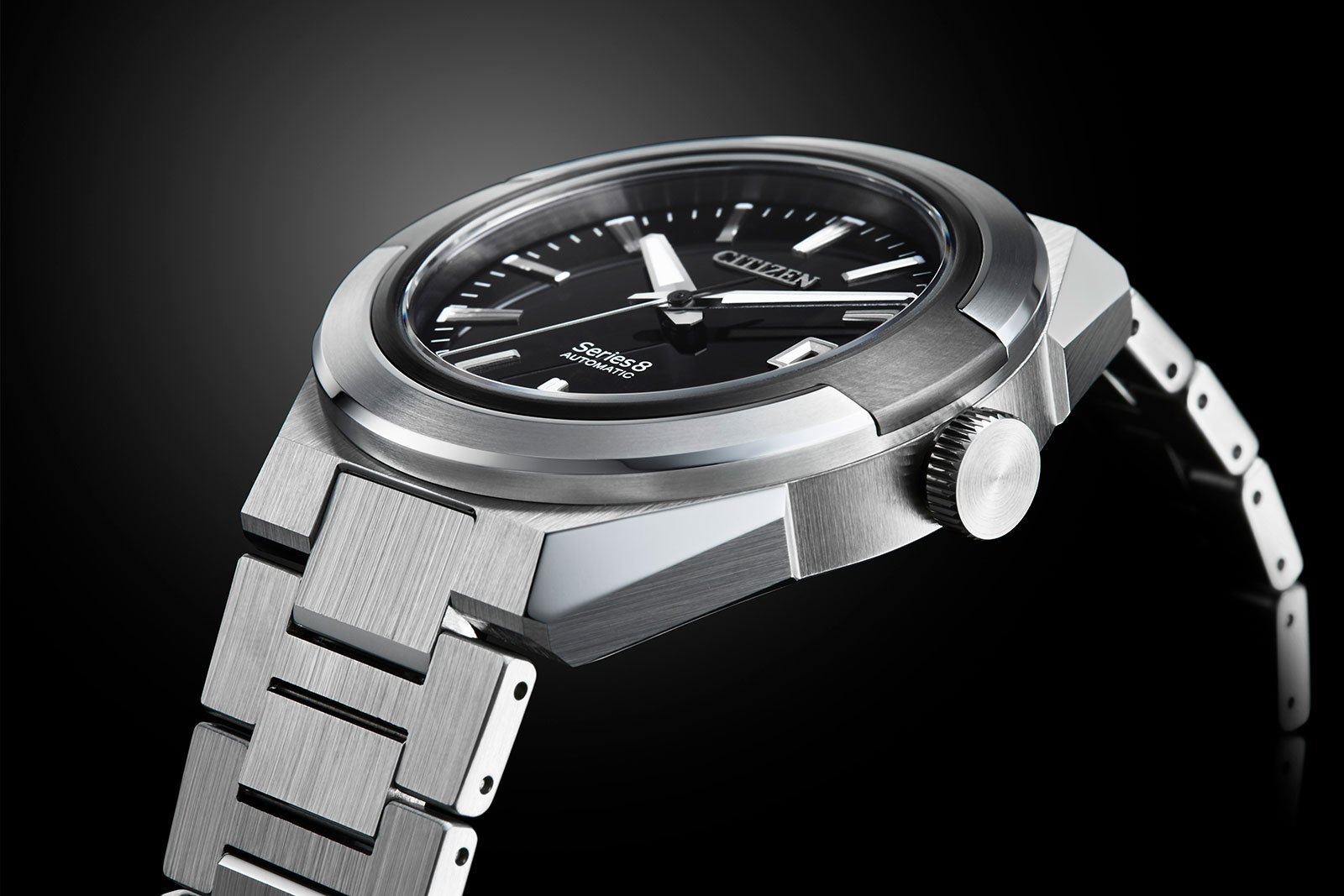 The 870 with its two-piece bezel Though all three models are slightly different, they are almost identical in size at 40 mm wide and a relatively thin 10-12 mm high. That’s a good size that large enough but not so big that the watch feels chunky, which is likely for this type of design beyond a certain size.

The 870 with its two-colour bezel seems the most appealing of the trio, with both its case and bracelet being more streamlined. Both the 830 and 831 have the same case that’s slightly octagonal, which makes more of a statement but feels less refined. The 830 tries a bit too hard with the fancy dial, while the 831 is more plain, which is fair given its entry-level price. 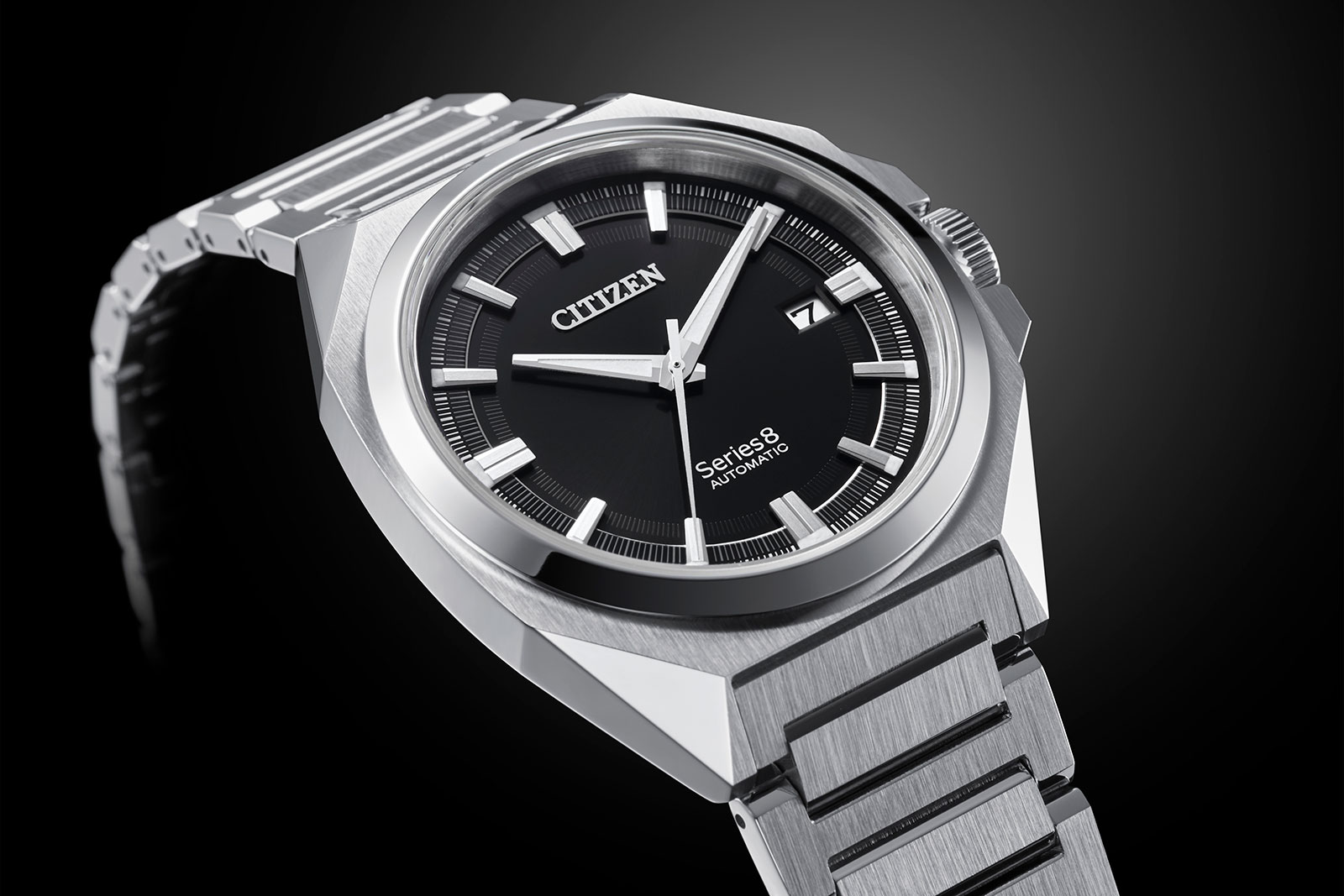 The 870 is the flagship of the Series 8. Though the design is minimalist compared to the other two models, it is made interesting with details like the two-piece bezel and contrast finishing of the case and bracelet. 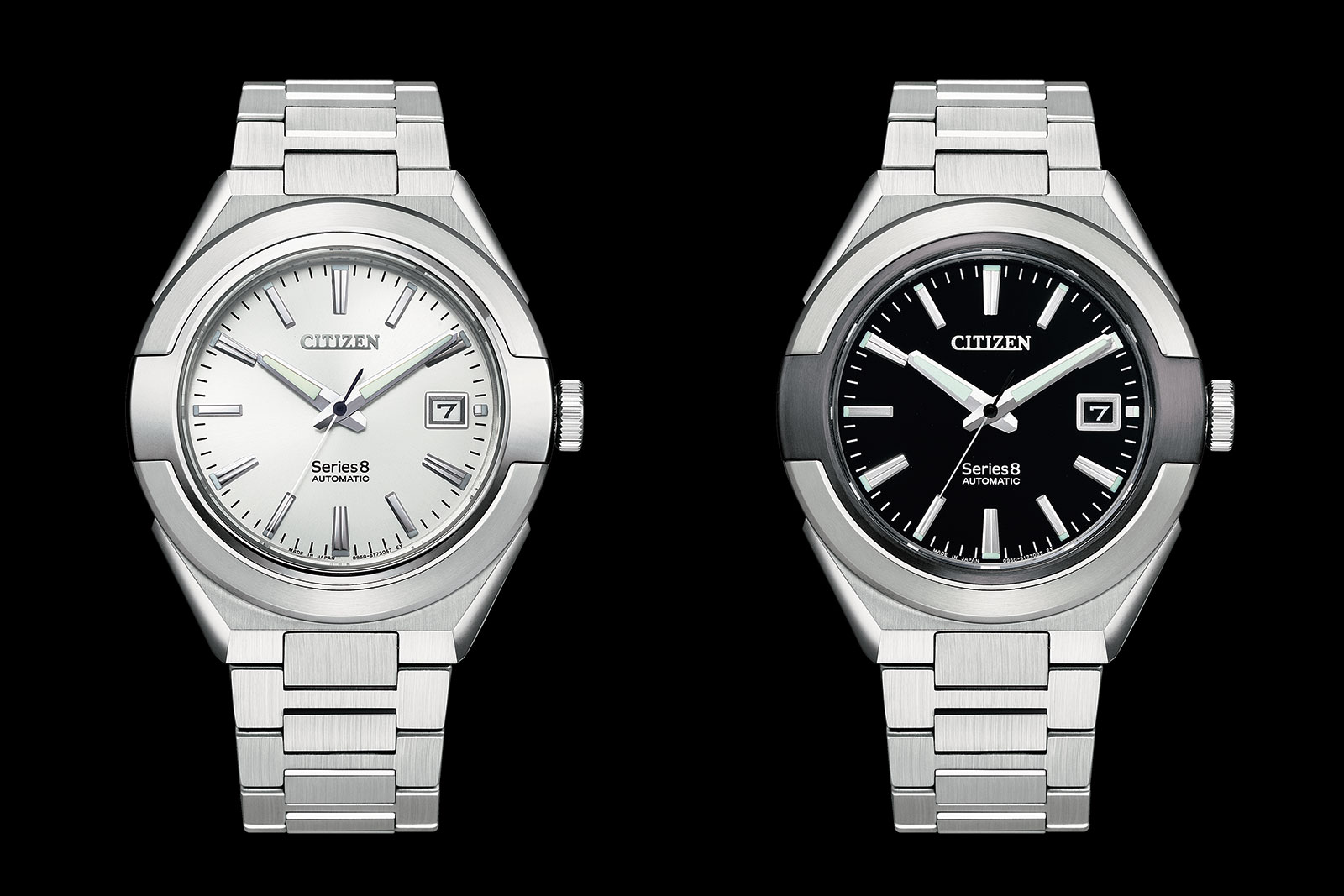 The 830 has a three-layer dial that’s made up of a metal base topped by a mother of pearl disc, followed by a topmost lattice that also carries the hour markers. It’s not for everybody but the dial gives the watch an unusual look amongst integrated-bracelet sports watches.

Slightly more angular than the case of the 870, the 830 case also has broader lugs, giving it a bit of a 1970s feel. And it also has large crown guards, which similar contribute to its larger appearance, although its diameter is the same 40 mm. 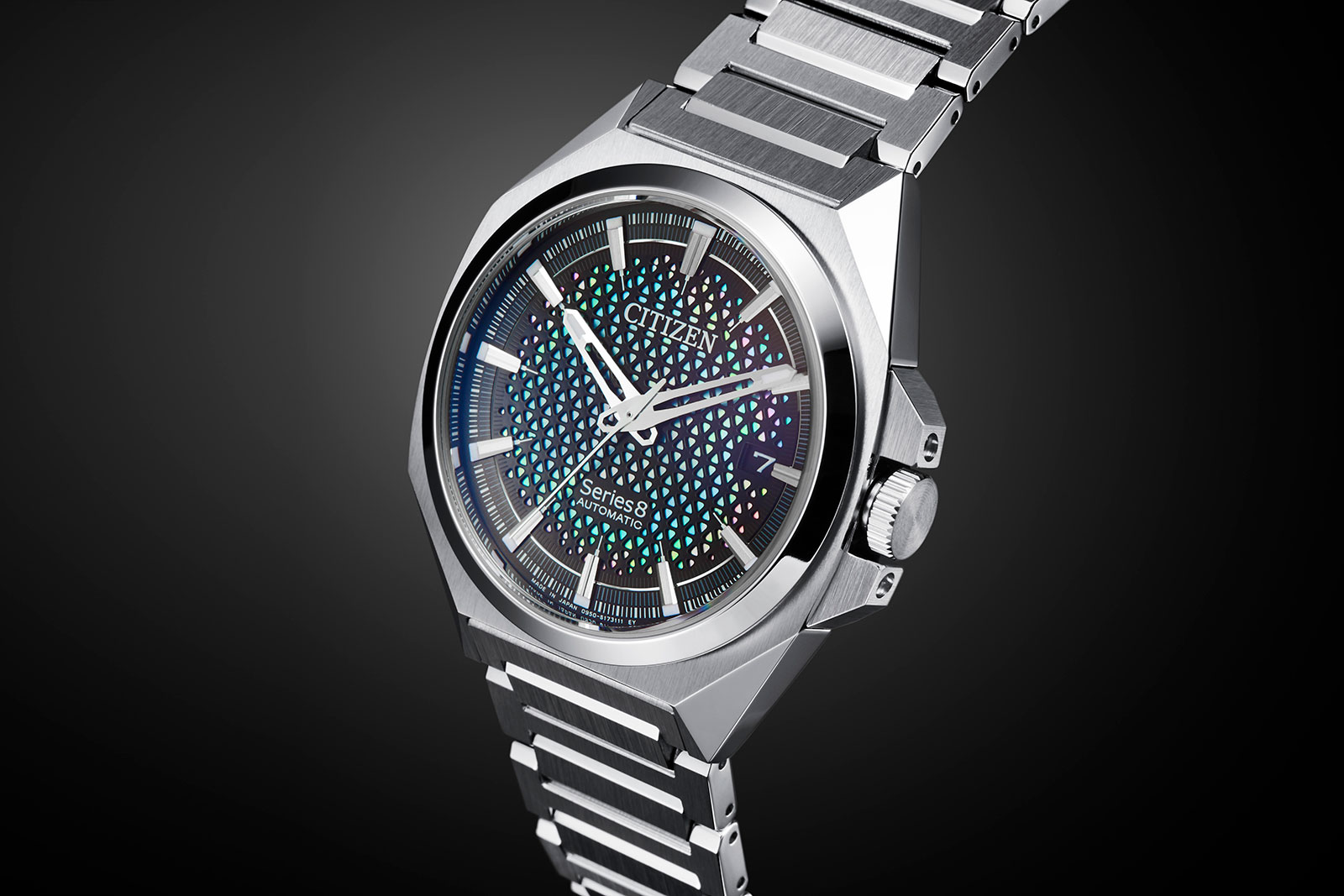 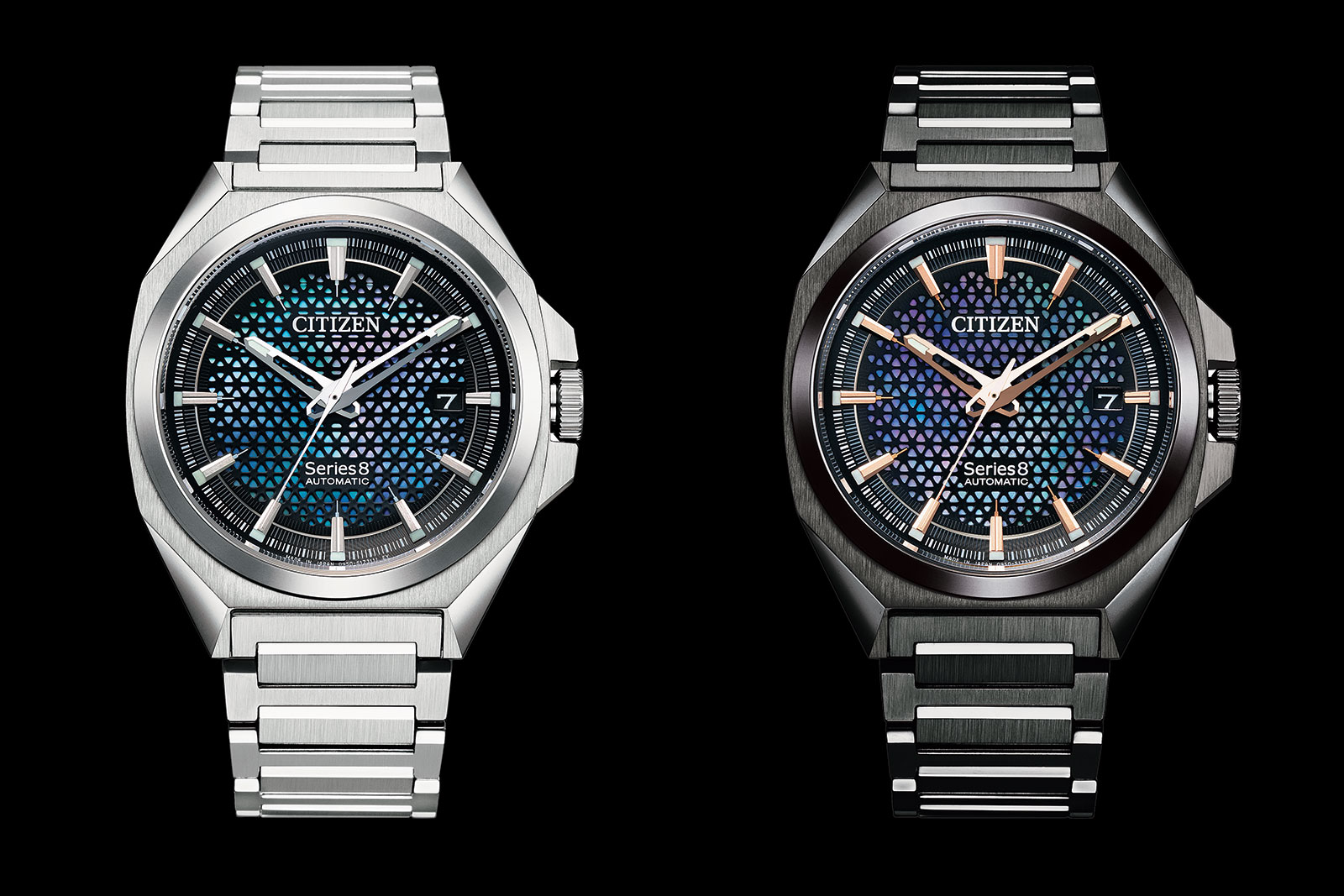 The simplest and most affordable Series 8 watch is the 831. This shares the same as case the fancy-dial 870, but instead has a clean dial that has a triple seconds track that fades towards the centre. 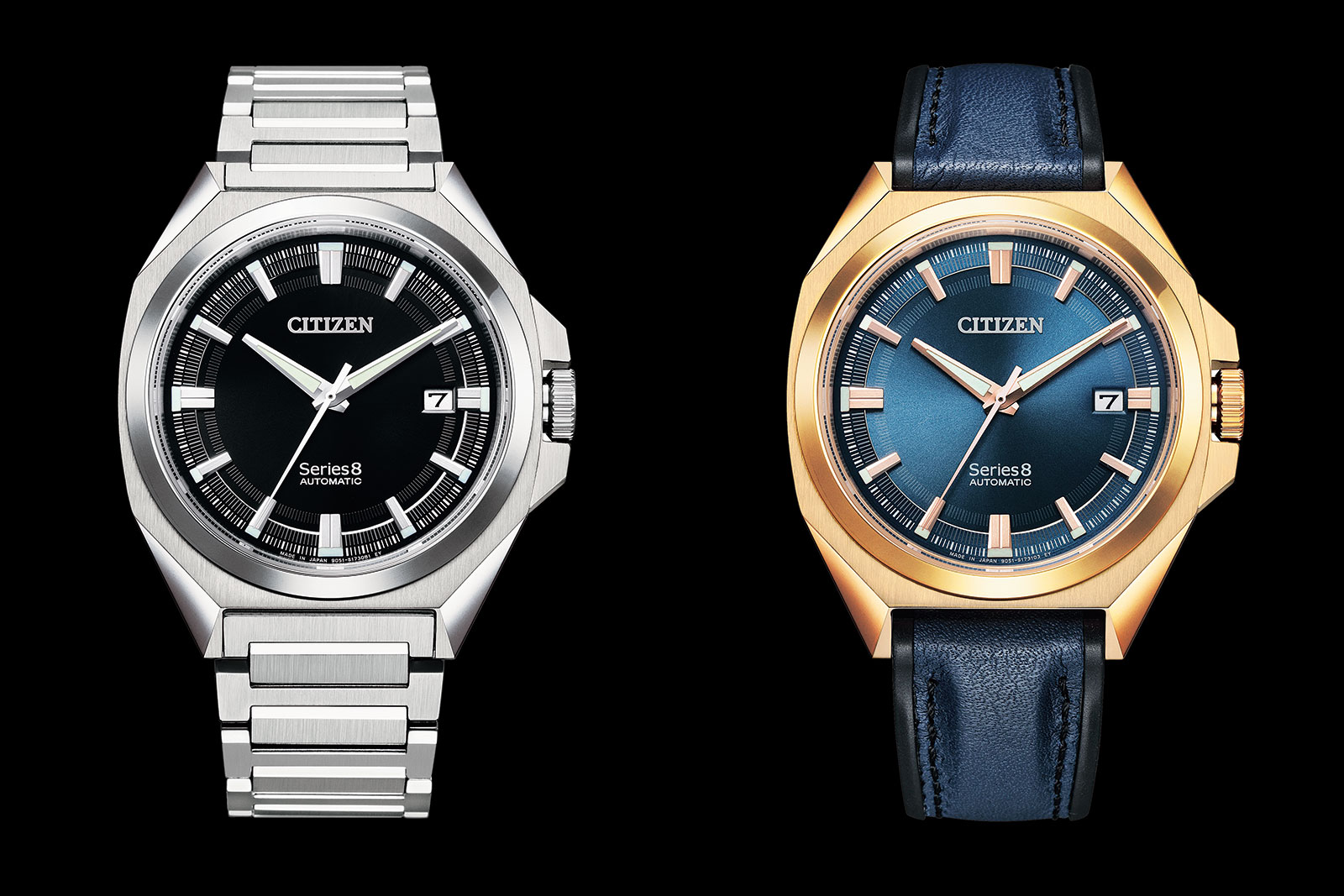 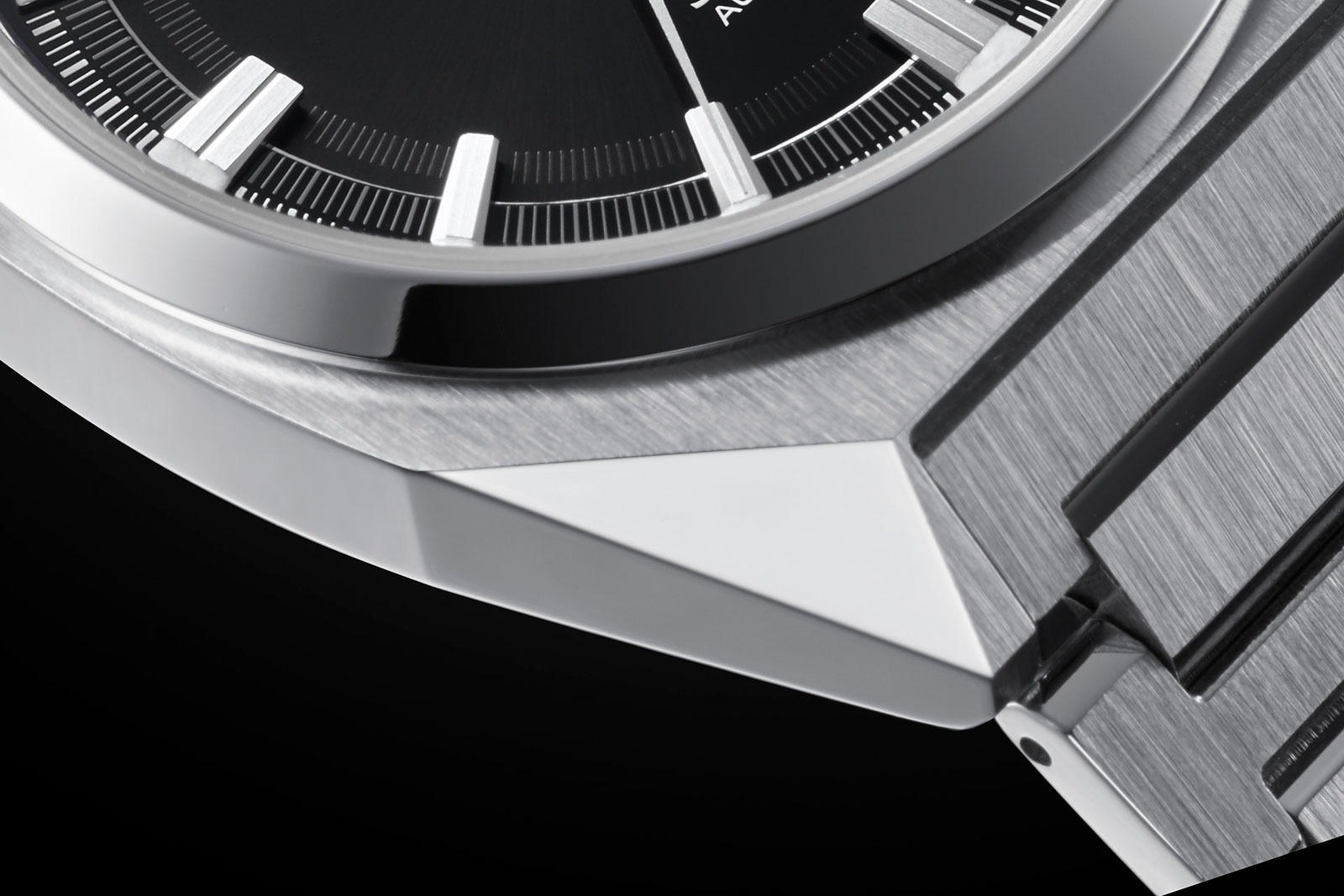 Availability: Starting August 2021 at Citizen boutiques and retailers
Price: US$1,200