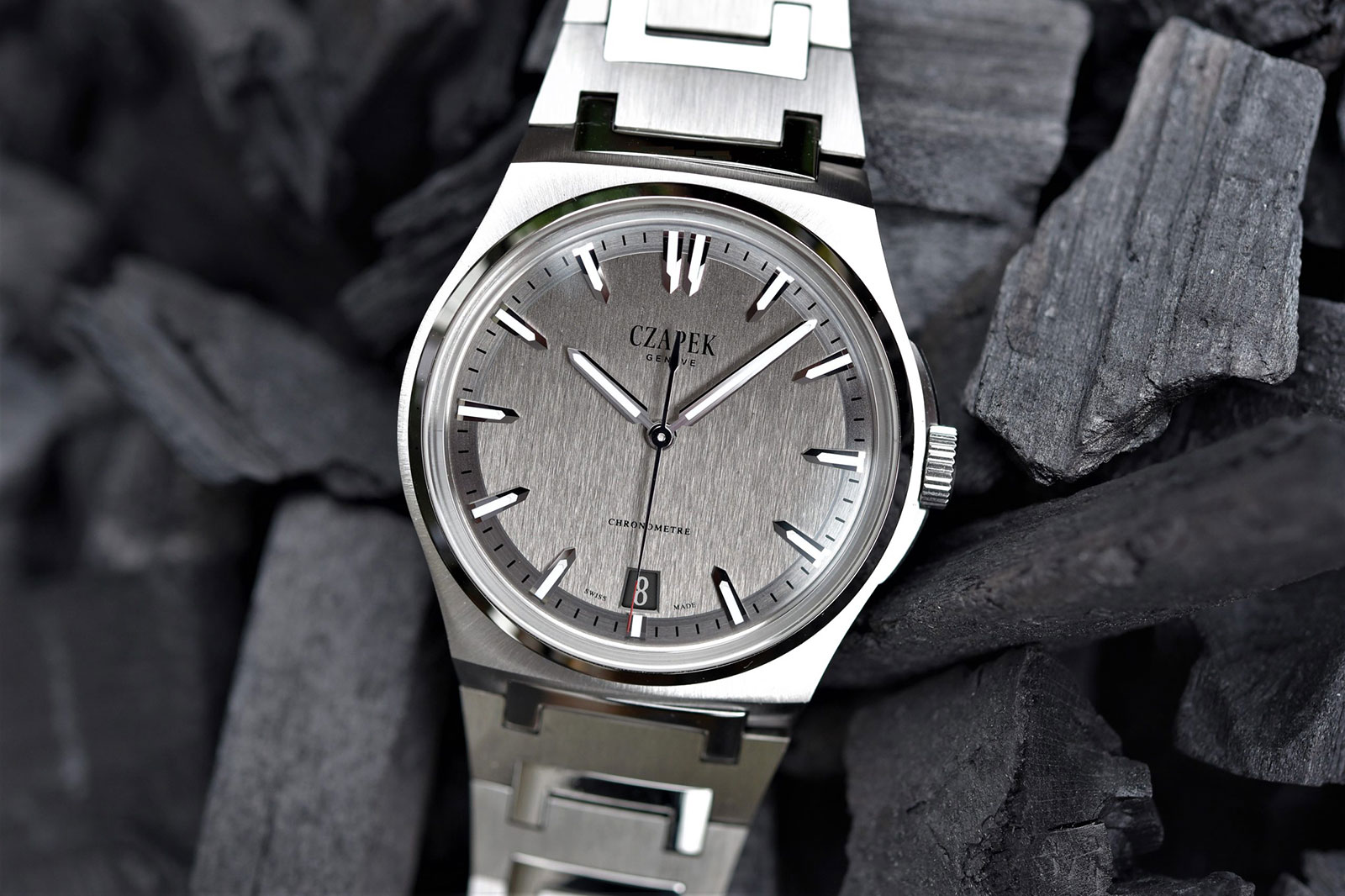 A marque revived via a crowdfunded effort in 2015, Czapek & Cie. has just announced its first sports watch, the Antarctique. The popularity of luxury-sports watches in steel makes that unsurprising, but the Antarctique is powered by a newly-developed, automatic movement with an interesting construction.

Doubtlessly conceived to cater to the current fad for luxury-sports watches in steel, the Antarctique is unsurprising in terms of design. While the overall look is reminiscent of a variety of watches, most notably the earlier-generation Girard-Perregaux Laureato, it manages to be different enough, in particularly with the C-shaped links.

But more important and interesting is the movement inside, the SXH5. It was conceived by a team that includes prominent constructors like Emmanuel Bouchet, an independent watchmaker who is probably best known for the Harry Winston Opus 12, as well as Daniel Martinez, an independent constructor who worked at Sellita, MCT, and Greubel Forsey in the past. 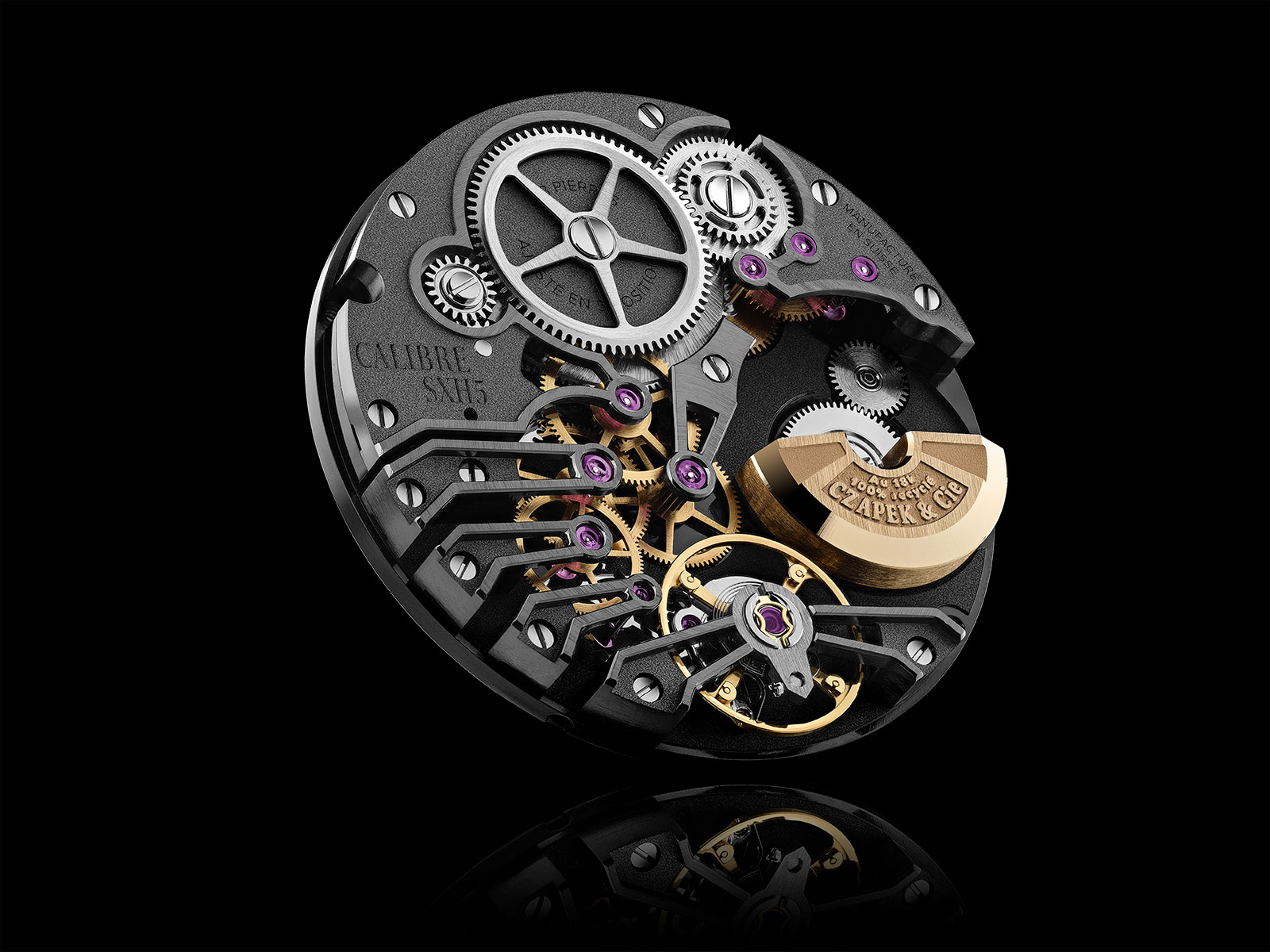 A large movement with high-quality features, the SXH5 has an interesting aesthetic that’s slightly inspired by vintage pocket watch movements but is clearly modern. And going by the photos, it also appears to be well finished.

But the Antarctique is expensive – its price tag of US$18,900 is almost exactly the same as that of the Vacheron Constantin Overseas Self-Winding. While the Antarctique probably has a more compelling and unusual movement, the Czapek brand has yet to live up to such pricing.

Czapek & Cie. is named after a brand founded by Franciszek Czapek, a Polish watchmaker who moved to Geneva in the early 19th century. His historical claim to fame was being the first business partner of fellow Pole, Antoni Norbert Patek. Together the two set up Patek, Czapek & Cie., a short-lived venture that last six years. In 1845, Patek went into business with Jean Adrien Philippe, resulting in Patek Philippe, and the rest, as they say, is history.

While the modern-day Czapek company got its start with more classically-styled watches, the Antarctique is a sports watch. Rated to 120 m, the Antarctique is practically sized at 40.5 mm wide, and a relatively thin 10.5 mm high. The case is also equipped with a quick-release mechanism to switch between the integrated steel bracelet and a strap. 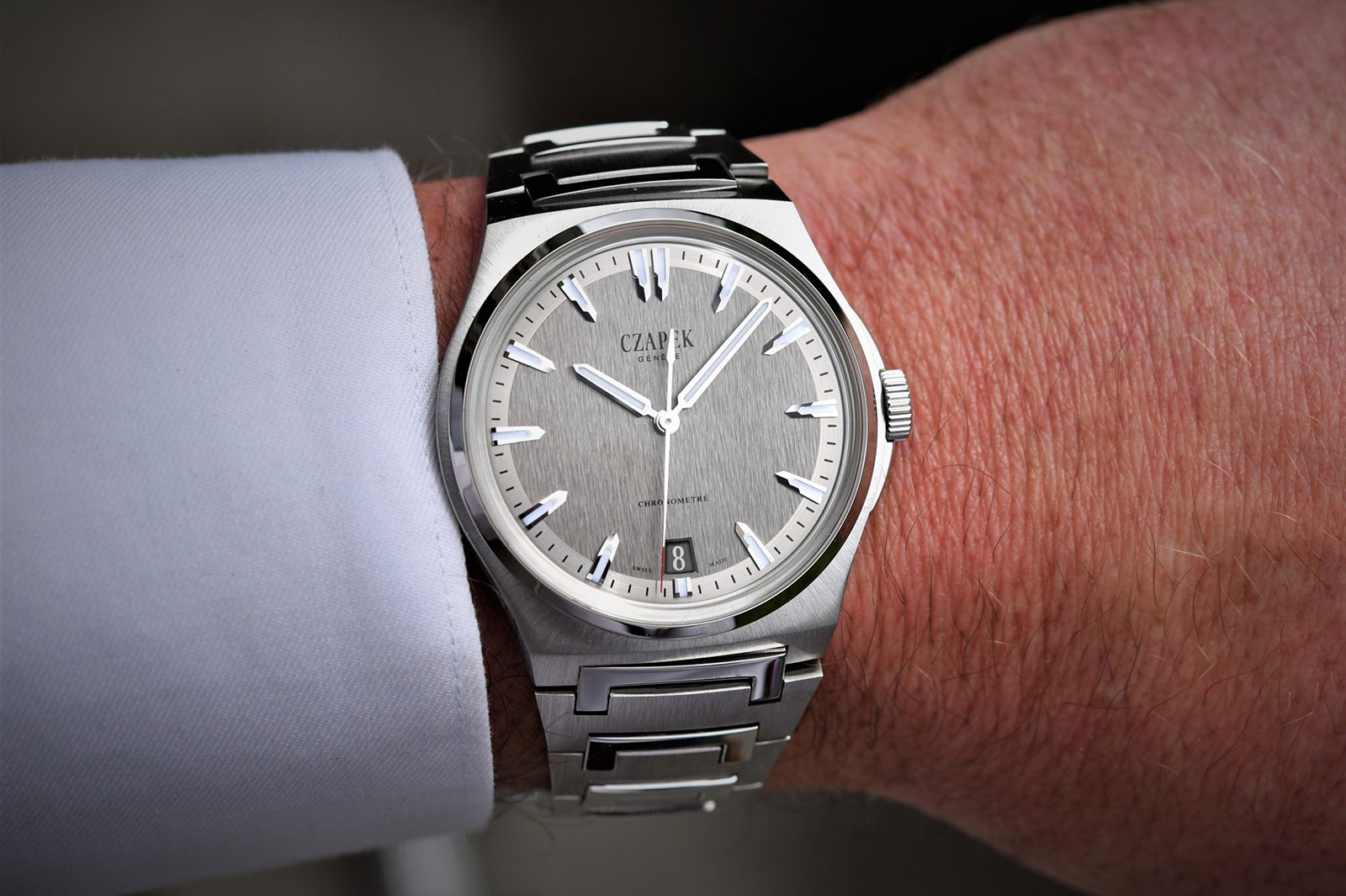 The more conventional of the launch models, the Antarctique Terre Adélie is a limited edition of 99 pieces at the maximum (depending on the number of pre-orders). It’s available in four colours, the dial is finished with a vertically-striated pattern and features applied, blade-shaped indices. 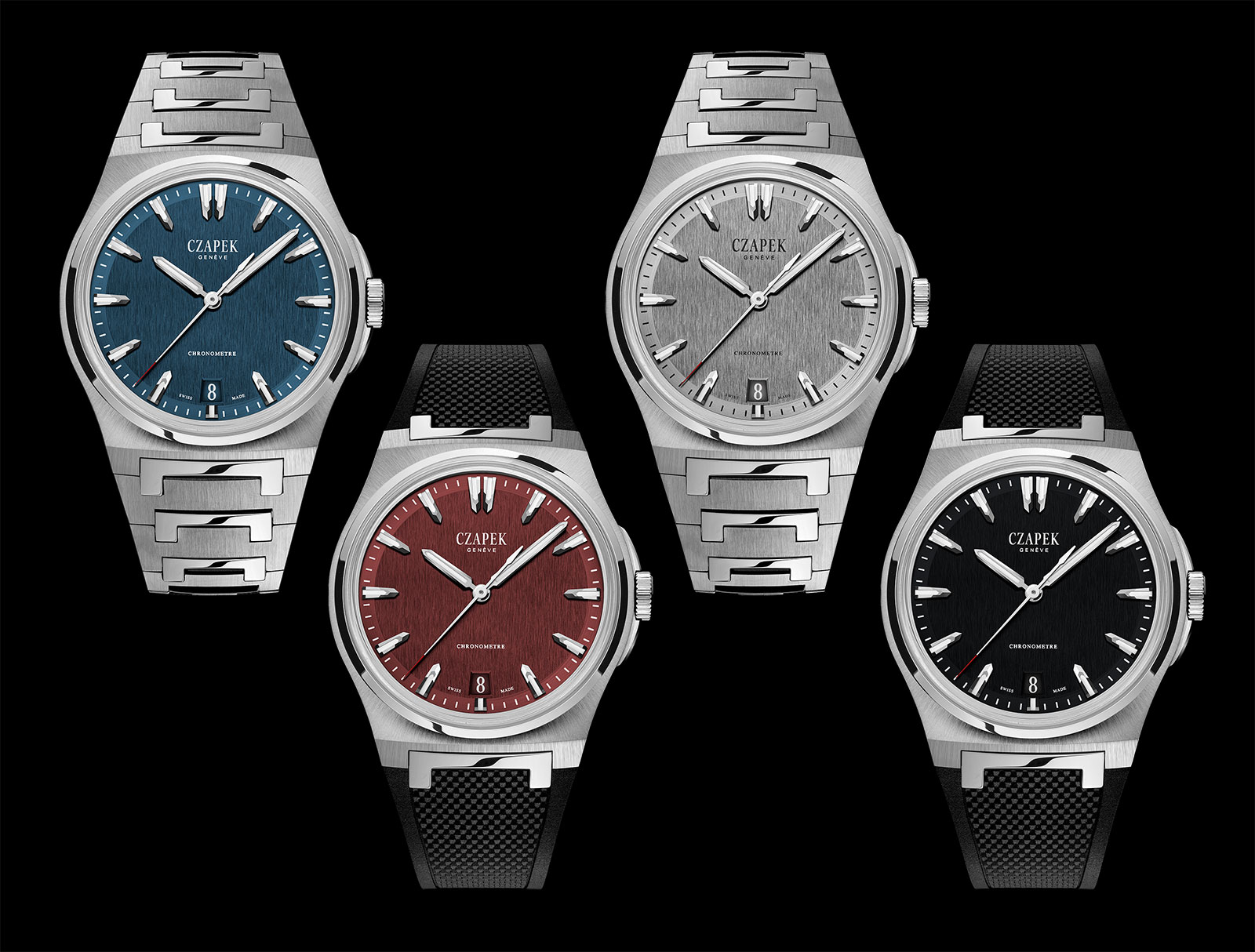 Antarctique Terre Adélie, which gets its name from Adélie Land in Antarctica, which was named after the wife of the French explorer who discovered the territory

The Antarctique Orion Nebula, on the other hand, is limited to 10 pieces and has an unusual hand-painted dial that depicts an abstract pattern inspired by the nebula of the same name. 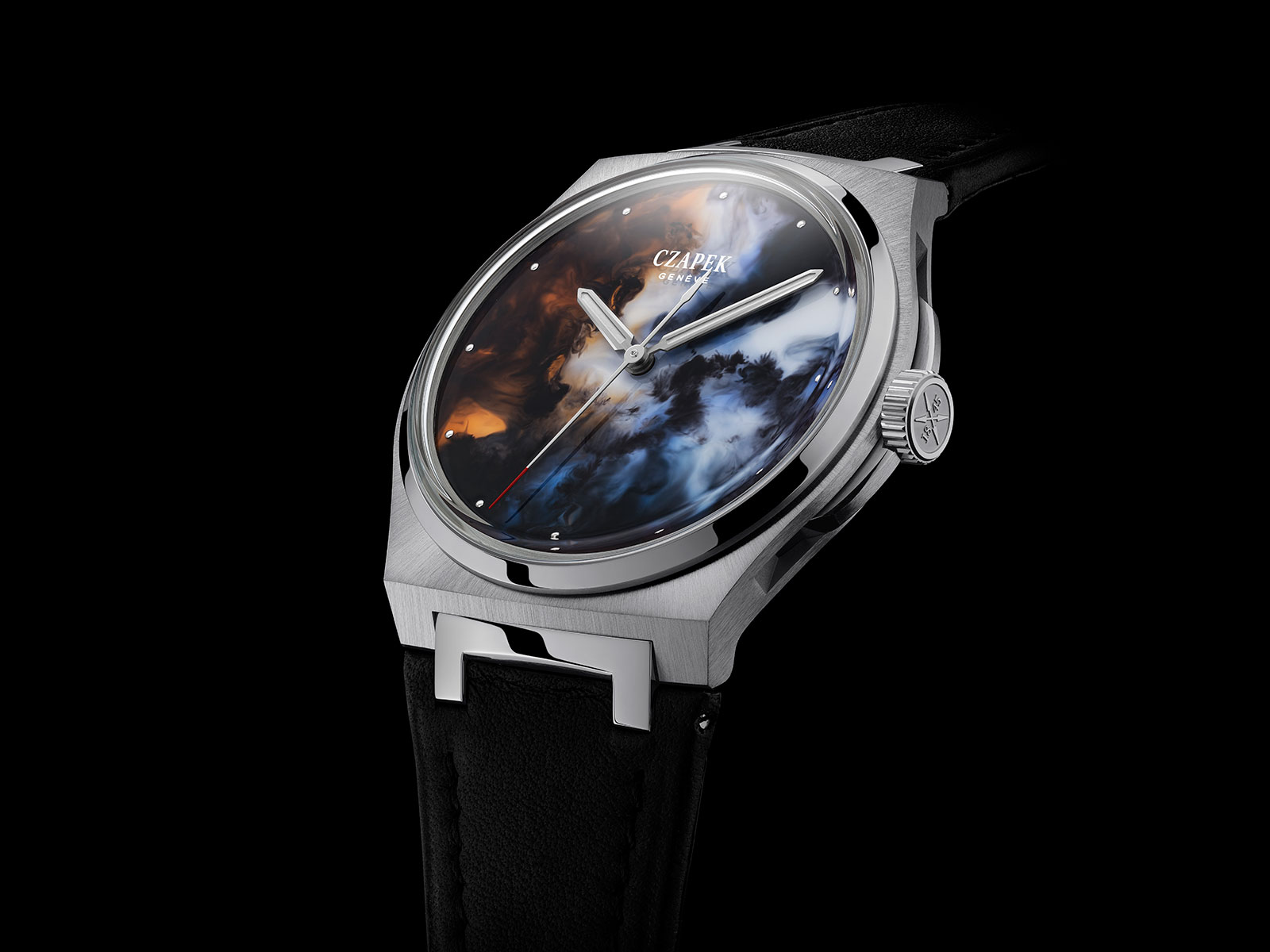 Both Antarctique models are powered by the SXH5.01 movement. Though only available in the Antarctique for now, the SXH05 will presumably make its way into other Czapek watches in the near future.

Finished entirely in black with brushed and frosted surfaces for contrast, the SXH5.01 has angular, open-worked cocks for the going train. The bridge for the free-sprung balance is similarly skeletonised. It’s wound by a micro-rotor made of 18k recycled gold, and will run for 56 hours on a full wind. 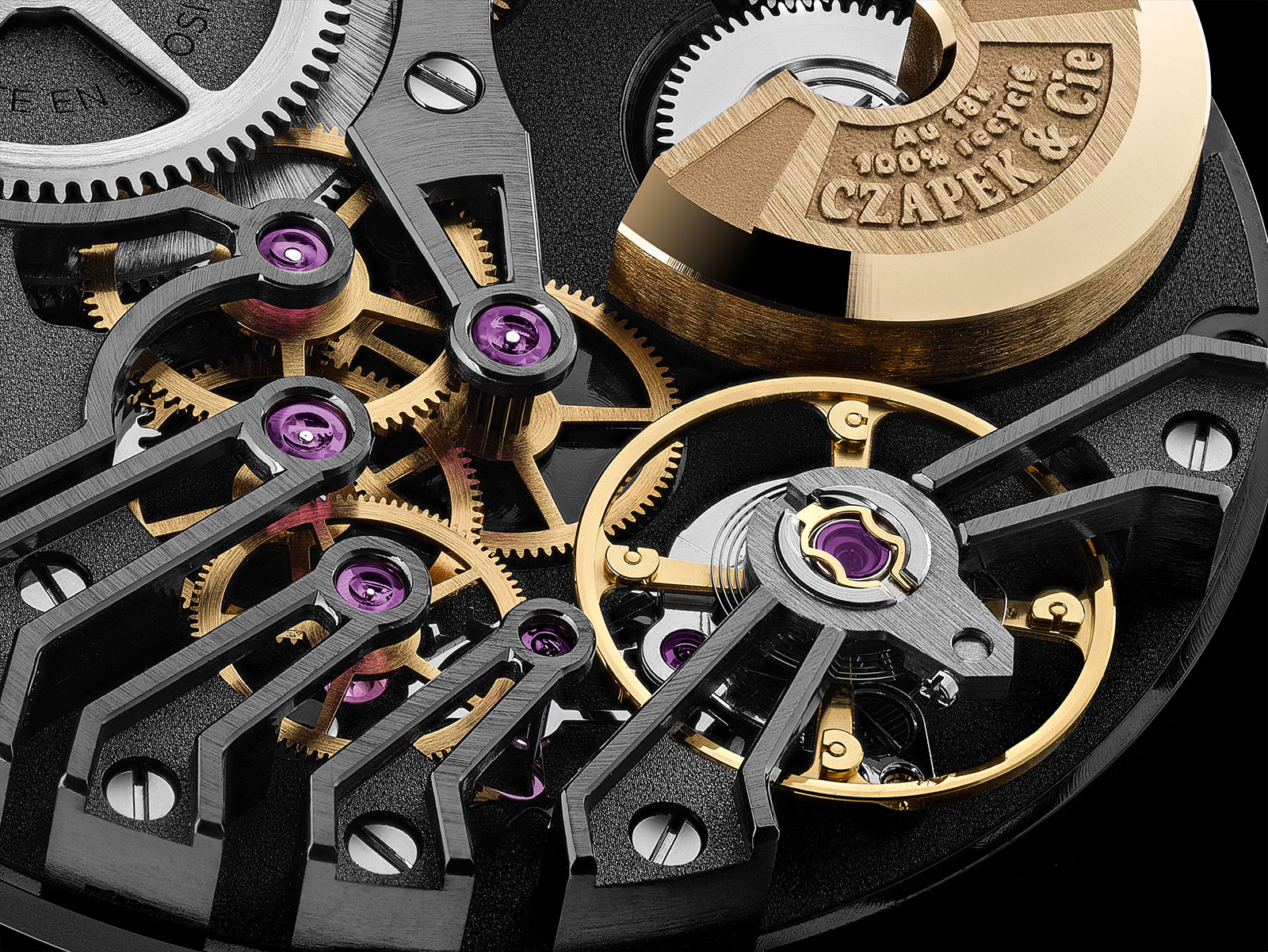