Citizen is one of the world’s biggest watchmakers, with its timepiece division generating about US$1 billion in sales each year – an output of several hundred million watches and movements annually. That vast manufacturing expertise means Citizen knows how to produce a fine mechanical movement. Now Citizen has finally accomplished it, and installed the movement inside a brilliant new watch.

Launched earlier this month, The Citizen Caliber 0200 is equipped with the brand’s first mechanical movement developed from scratch as a high-end calibre (“The Citizen” is the name of the collection, while Caliber 0200 refers to movement as well as this specific model). Although the brand did launch a version of The Citizen with an automatic movement in 2010, the new Caliber 0200 is radically different, and tremendously superior. 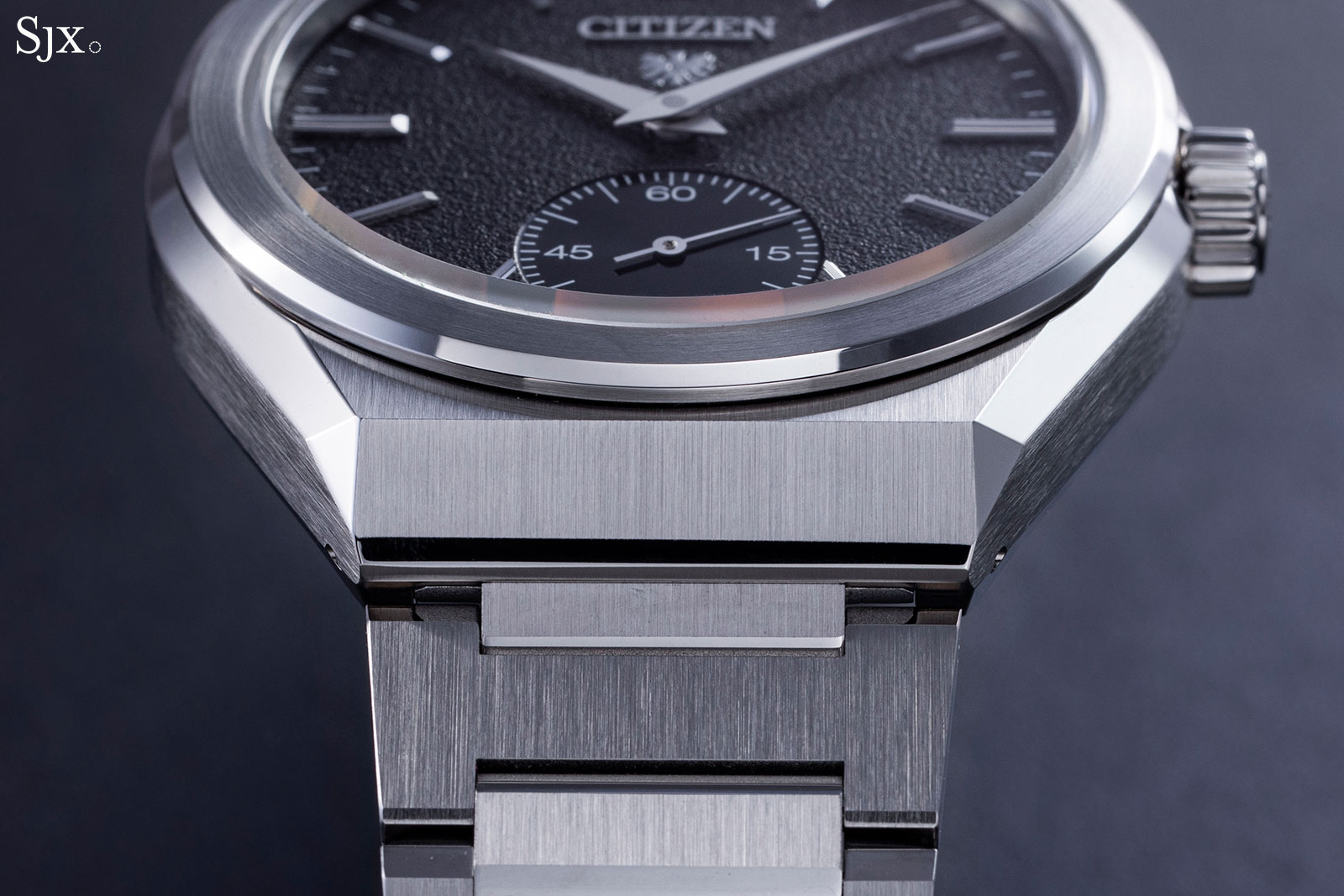 While the highlight is the new Caliber 0200, the entire watch is executed extremely well. The case and bracelet are outstanding, fabricated and finished so well there is nothing else that comes close in the same price segment.

The quality of the watch was apparent in the press photos, which made me want to see it in the metal. I got my hands on a prototype for a couple of days earlier this month, an experience that left me substantially impressed.

[Editor’s note: The watch pictured is a prototype, so it does contain a handful of hard-to-spot imperfections.] 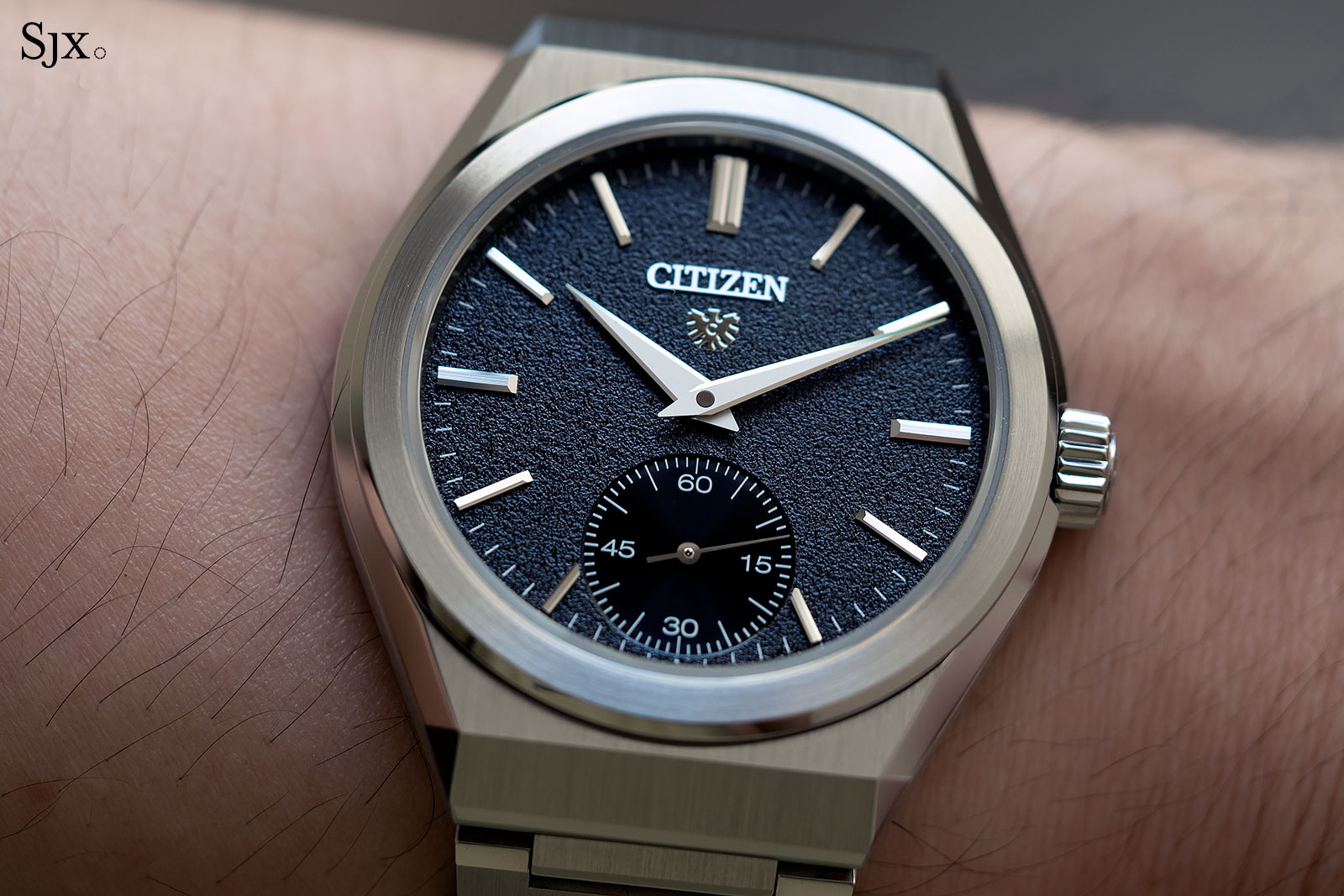 On paper, the Caliber 0200 might seem uninteresting, being yet another sports watch with an integrated bracelet, a generic formula seemingly catered to today’s fads. But the Caliber 0200 is more than that, and actually most excellent in almost every aspect. 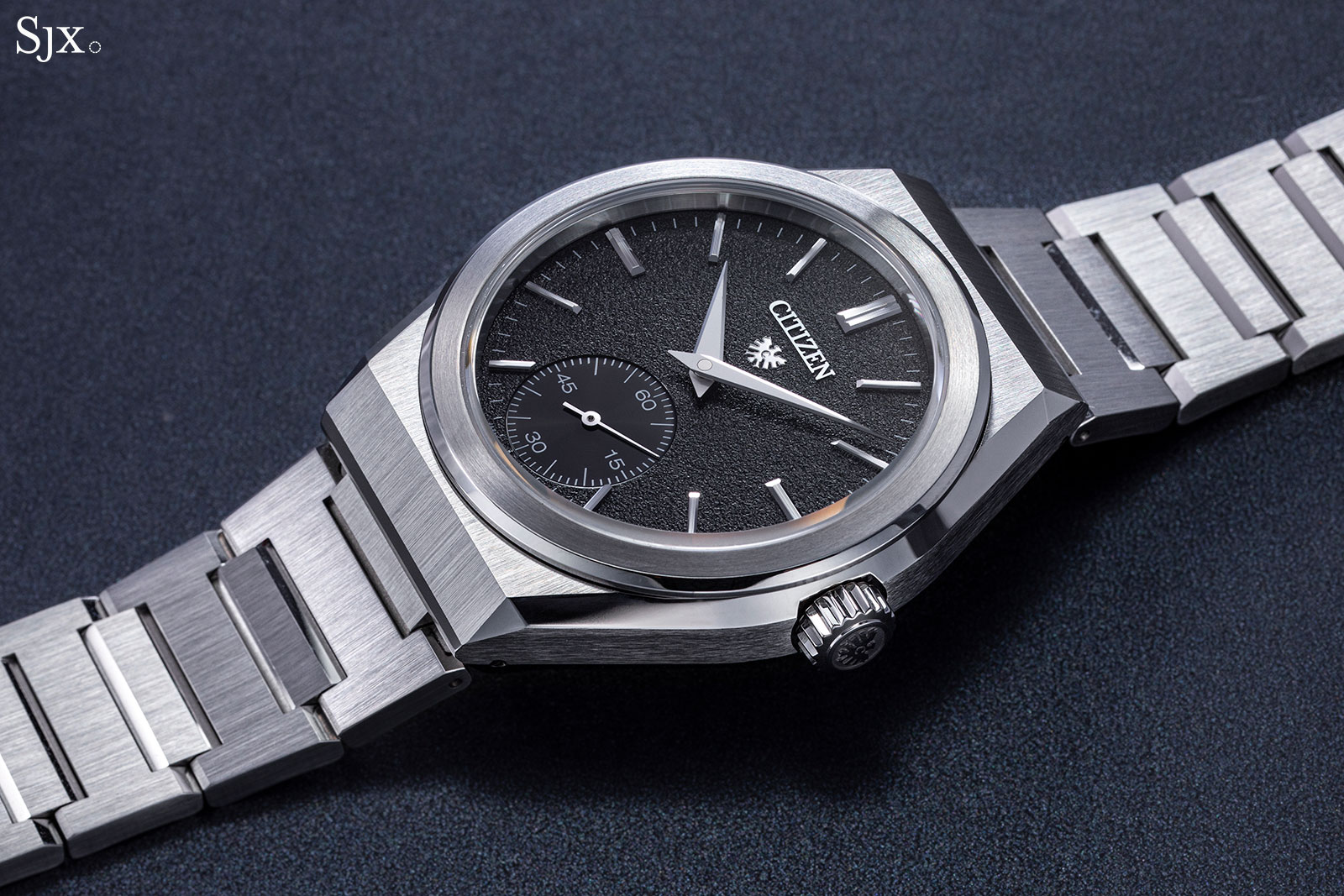 Not only are the case and bracelet both exemplary in quality, their design is well thought out and importantly, original. The Caliber 0200 avoids looking derivative, a common weakness in the crowded integrated bracelet-sports watch segment. Admittedly, the dial plays it safe in terms of design, but like the case the dial quality is technically perfect.

The Caliber 0200 is not perfect – minor quibbles include the not-so-seamless integration of the bracelet – but it is exceptionally good. Even though it’s early in the year, the Caliber 0200 will likely be one of the year’s best watches.

The Caliber 0200 looks and feels compact on the wrist, although it is a good size at 40 mm wide and a bit under 11 mm high. It’s relatively lightweight, but feels good: the case finishing screams quality while the tight tolerances and precise fit of all the components are obvious in the hand.

The tactile quality of the Caliber 0200 is excellent not with its external components, but with the movement – the sensation of the winding and setting mechanism is precise and crisp. Because the case has several wide, flat planes that alternate between mirror polishing and brushing, it catches the light well from almost any angle. All of the case surfaces have a shine that gives the watch a look of refinement, something that is typically only found on the far pricier-sports watches.

I only had the prototype for a couple of days, but was continuously impressed by the finishing of the case and bracelet throughout the period. It got my attention, and I still remember it fondly after returning the watch. 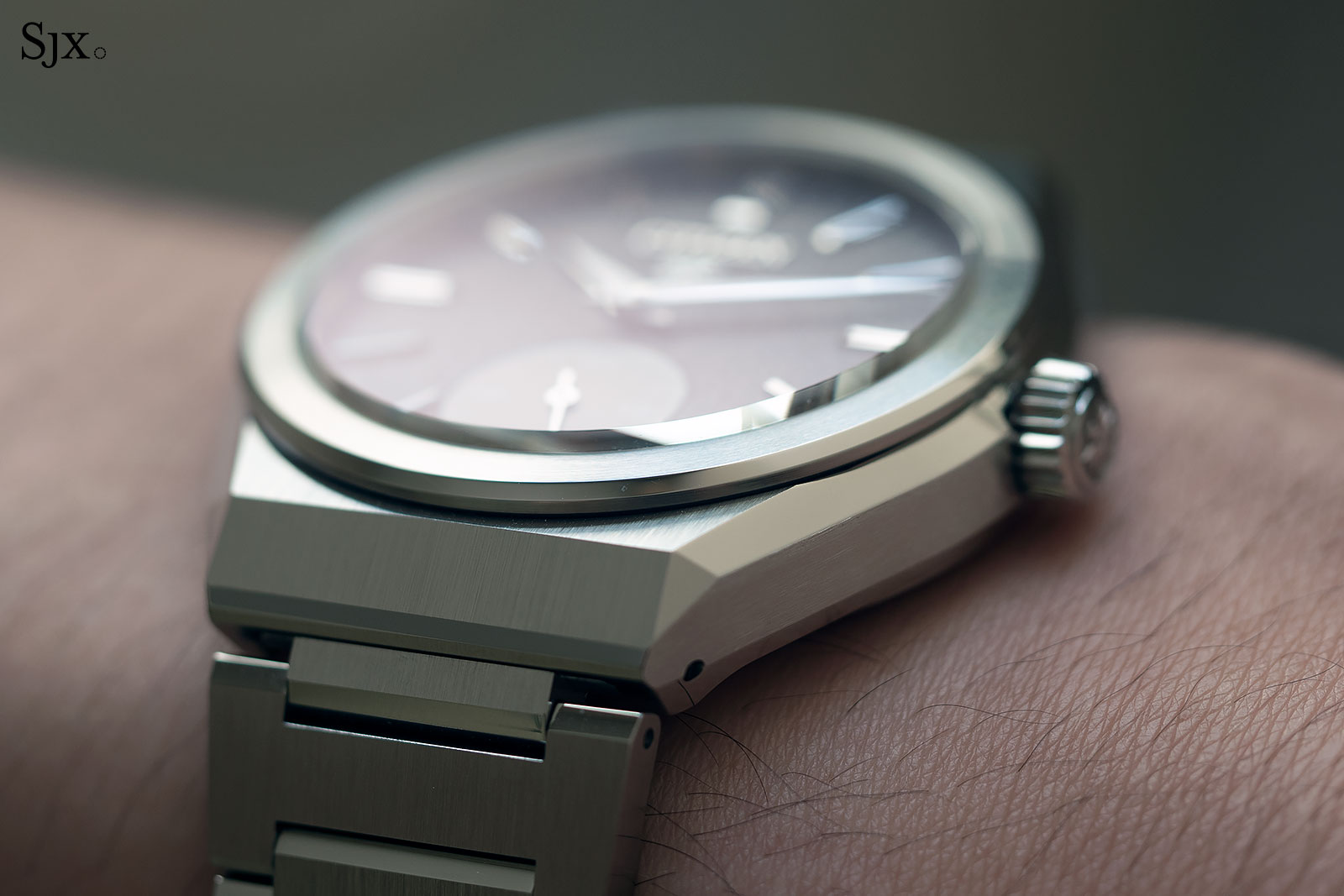 The case is a broad tonneau shape made up of simple, angular lines, bringing to mind designs of the 1970s. While many sports watches with integrated opt to be wide and flat, the Caliber 0200 has a substantial profile. It’s not thick, but tall enough to allow for a range of facets and finishes that cumulate in a deeply appealing case. The case incorporates numerous facets and bevels, many of which are not initially evident. These discreet planes and surfaces elevate the design by giving it greater visual refinement. The sapphire crystal sits above the bezel, which looks good but might leave it prone to chips on its edge 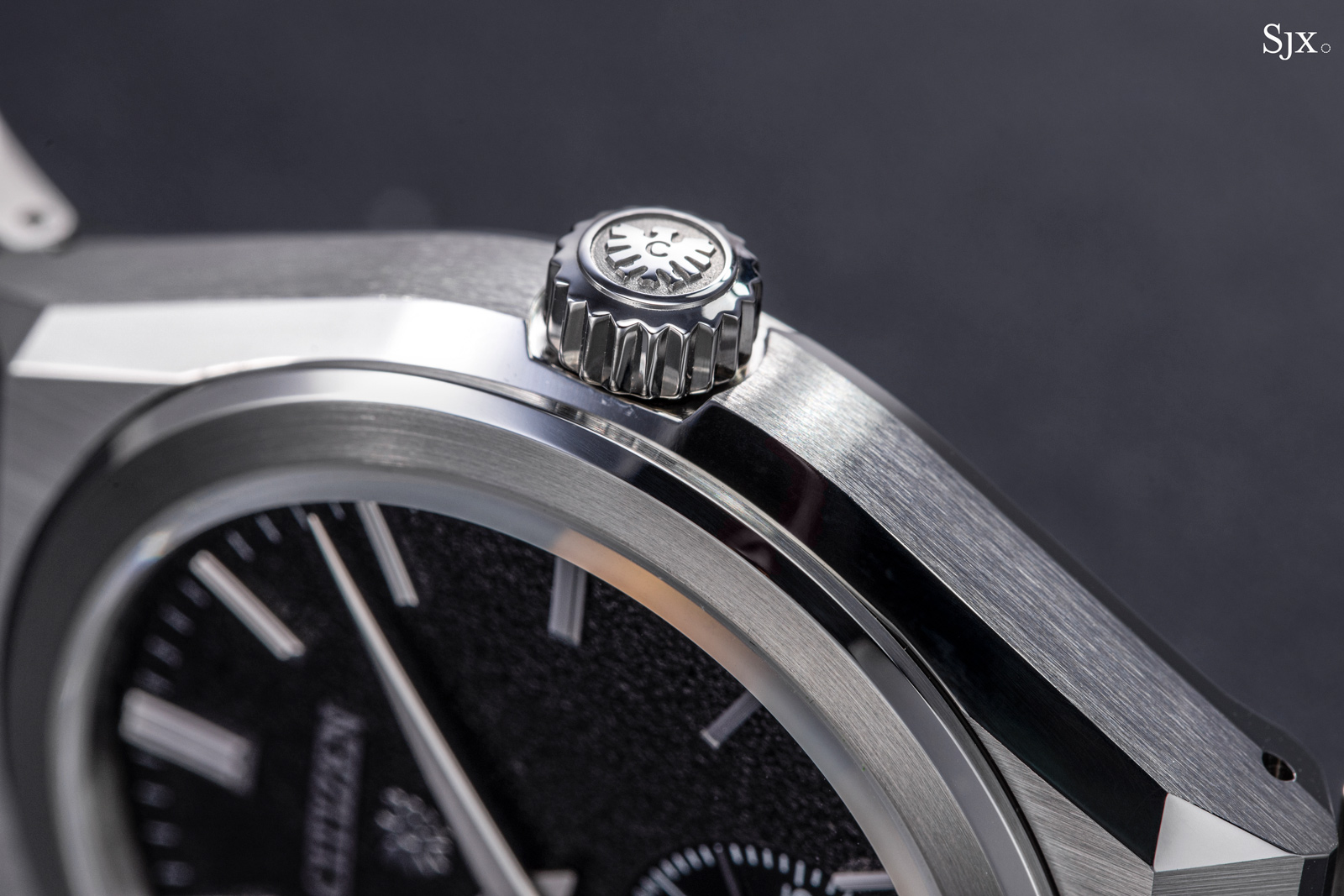 The best bit of the case is the wide, flat face just below the bezel where the planes of the case side converge, creating a delicate set of facets.

And that also reveals the unusually complex shape of the case: from the base of the bezel, the case turns downwards to create four, progressively narrower planes before meeting the first link of the bracelet.

Instead of being integrated as is fashionable today, the bracelet meets the case at a border. Although it doesn’t have the seamlessness of a true integrated design, the design is harmonious. Both the case and bracelet look like they belong together. The flanks of the case reveal similarly complex planes up close. Here they serve a clear purpose: reducing the perceived height of the case with the bevels on the top and bottom lengths. And in a now familiar pattern, the bracelet achieves a similar degree of finishing and complexity – perhaps a greater challenge given the size and flatness of each link. All the links are brushed on their top faces, with polished bevels on the inner edges, followed by a sandblasted finish on the contact faces.

The links do not have polished bevels on the outside edges, but this keeps the lines of the watch clean and avoids taking attention away from the case. The only element of the watch that could be a little fancier is the clasp. It’s a straightforward, single-fold clasp with two pushbuttons to release, an effective and proven set up. But the design of the clasp means it breaks up the lines of the bracelet. In contrast to the case, the dial is restrained in its design. According to Citizen, because the Caliber 0200 is a high-end watch, its dial had to be timeless and functional in the vein of a classic gentleman’s wristwatch.

The dauphine hands and baton markers are essentially identical to other models in The Citizen line up, which themselves are modelled on 1960s wristwatches. The result is a functional elegance, but one that reveals a great degree of detail up close. Though seeming like a plain, matte dial at a distance, the dial is actually textured with a finish Citizen refers to as the “sand-ripple pattern”. The texture is reminiscent of rough stone, but incredibly intricate upon magnification, with its granularity being invisible at arm’s length.

The texture is created with a process uncommon in dial making – electroforming. It involves electrodeposition of metal particles on a mould, resulting in a thin and light structure with extremely fine tolerances, which is exactly what the dial is. 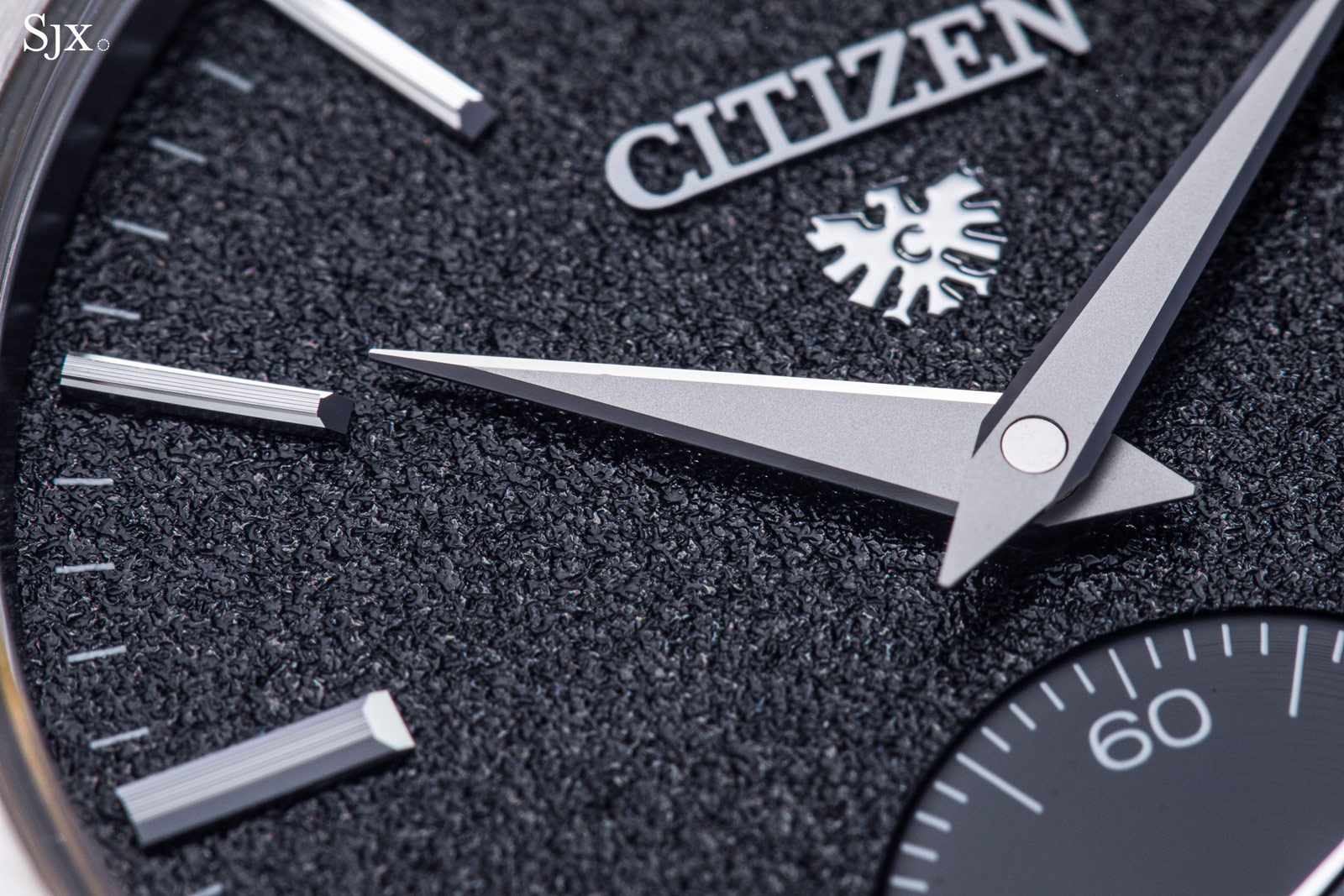 The seconds sub-dial is finished with a concentric pattern that is also remarkably fine and several orders of magnitude finer than the concentric stamping typically found on sub-dials. The fineness of the pattern indicates it was probably achieved with a reductive process, like engraving or lapping, rather than stamping.

But because the sub-dial is so finely textured, it seems smooth at arm’s length. That creates a stark contrast against the texture of the dial, which is slightly jarring since it makes the seconds a point of attention. All the other elements on the dial, including the two logos, are discrete components applied to the surface. All of the hour markers as well as the hands are milled with a diamond-tipped tool, giving them precise shapes with razor-sharp edges.

Even though neither the hands nor markers have “lume”, their mirror-finished surfaces catch the light enough to make them legible in most lighting. The Citizen logo reveals some fine milling tracks on its surface The milled top surfaces of the hour markers The seconds hand is flat and functional, and a little mundane relative to the rest of the dial

The model is named after its movement, and rightly so. Even though the calibre was conceived as a reliable workhorse, it is constructed in a sophisticated and fine manner. The Caliber 0200’s technical features are complete and incorporate many of the elements expected of a high-end movement today, like the free-sprung balance for instance. Like the case, the movement is visually appealing because of its clean design and attractive finishing. Although most of the decoration is applied by machine, it is extremely clean and neat – illustrated by the countersinks and bevels. In fact, the finishing is comparable to Swiss movements found in a far higher price point, like the movements of H. Moser & Cie. for instance.

More telling are the smallest elements that reveal the attention to detail in its design, most notably the shock absorber spring designed specifically for this movement.

For those who want to know more, we’ll be covering the movement in greater detail in a second article later this month. All the bridges have a brushed top surface, accent with wide, diamond-cut bevels on the edges and countersinks Citizen designed the adjustable-mass balance wheel for the Caliber 0200, marking the first time it is using a free-sprung balance in one of its movements

The Caliber 0200 is marvellous in nearly all respects, making it a notably impressive first attempt by Citizen. It sets the bar very high. The fact that the Caliber 0200 is this good and only retails for US$6,000, makes it an instantly compelling buy.