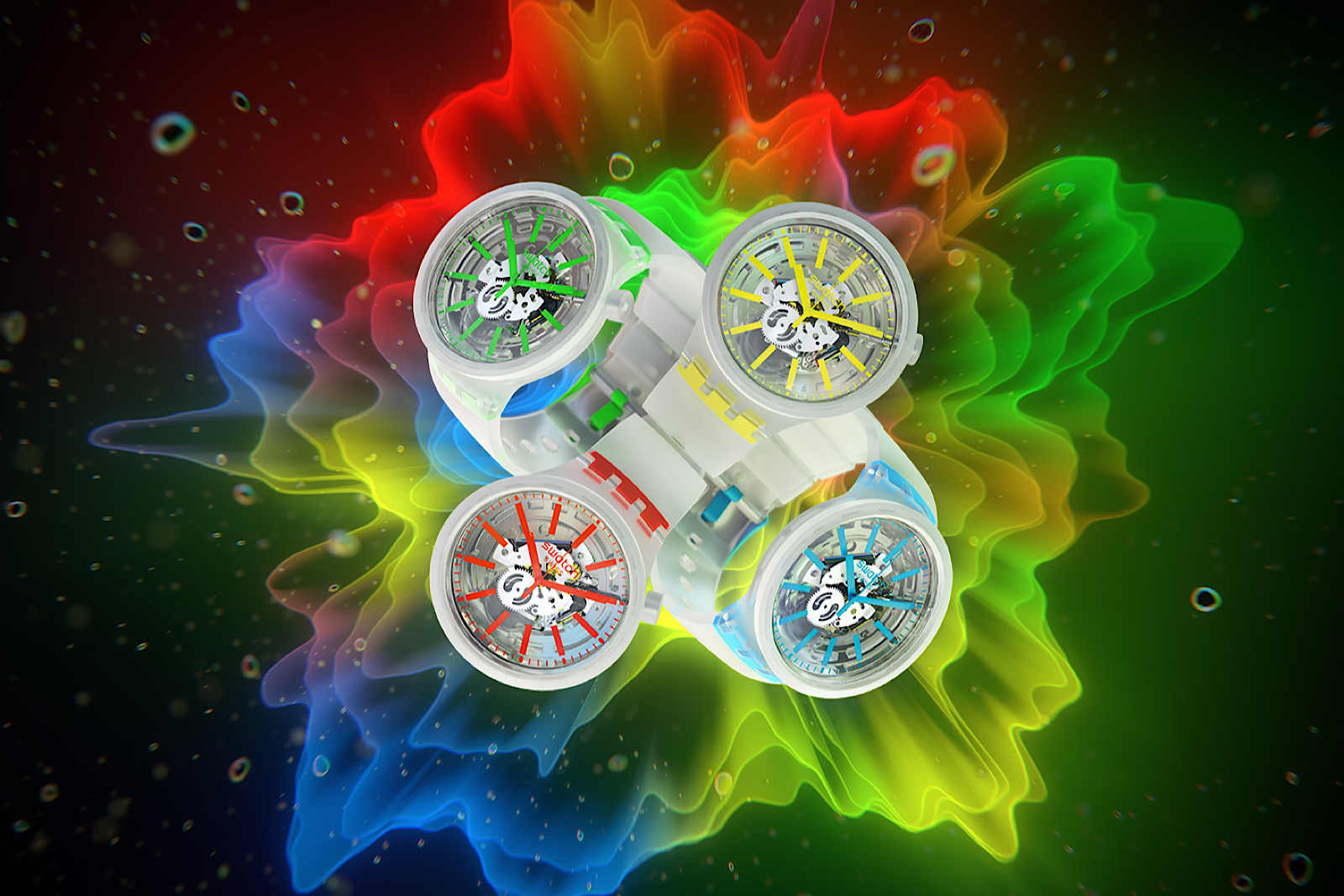 Only just introduced earlier in the year, the Big Bold Jelly is a modern, majorly-upsized take on the Jelly Fish (ref. GZ010) of 1983 that had visible innards, just like the eponymous marine species.

Now the jellyfish gets a dose of colour with the Big Bold Jelly Neon. Essentially the same watch as the clear Big Bold Jelly, it is dressed up in bright, neon colours – orange, yellow, green or blue – for a more edgy and lively look. 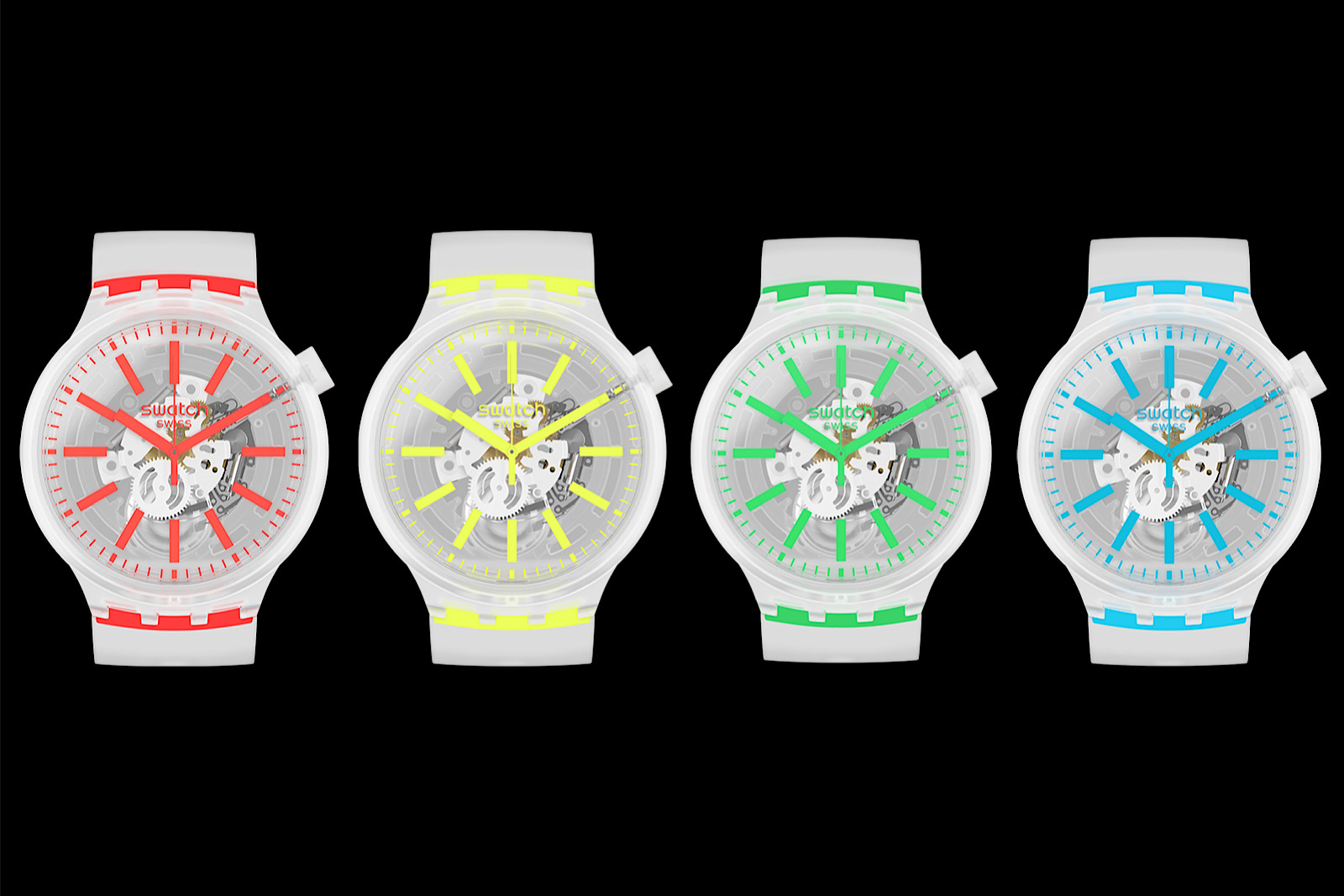 Swatch watches are popular for their eccentric, recognisable designs – and were wildly popular 30 years ago in their heyday – and the Big Bold Jelly Neon is no different.

The watch is indeed big and bold. The translucent plastic case is 47 mm – matched with a translucent strap – and reveals the gears of the quartz movement on the clear dial. And it has the crown at two o’clock, which is pretty unconventional. The particular combination of whimsical quirks rarely exists in other watches, which makes the Big Bold case immediately distinct from afar. 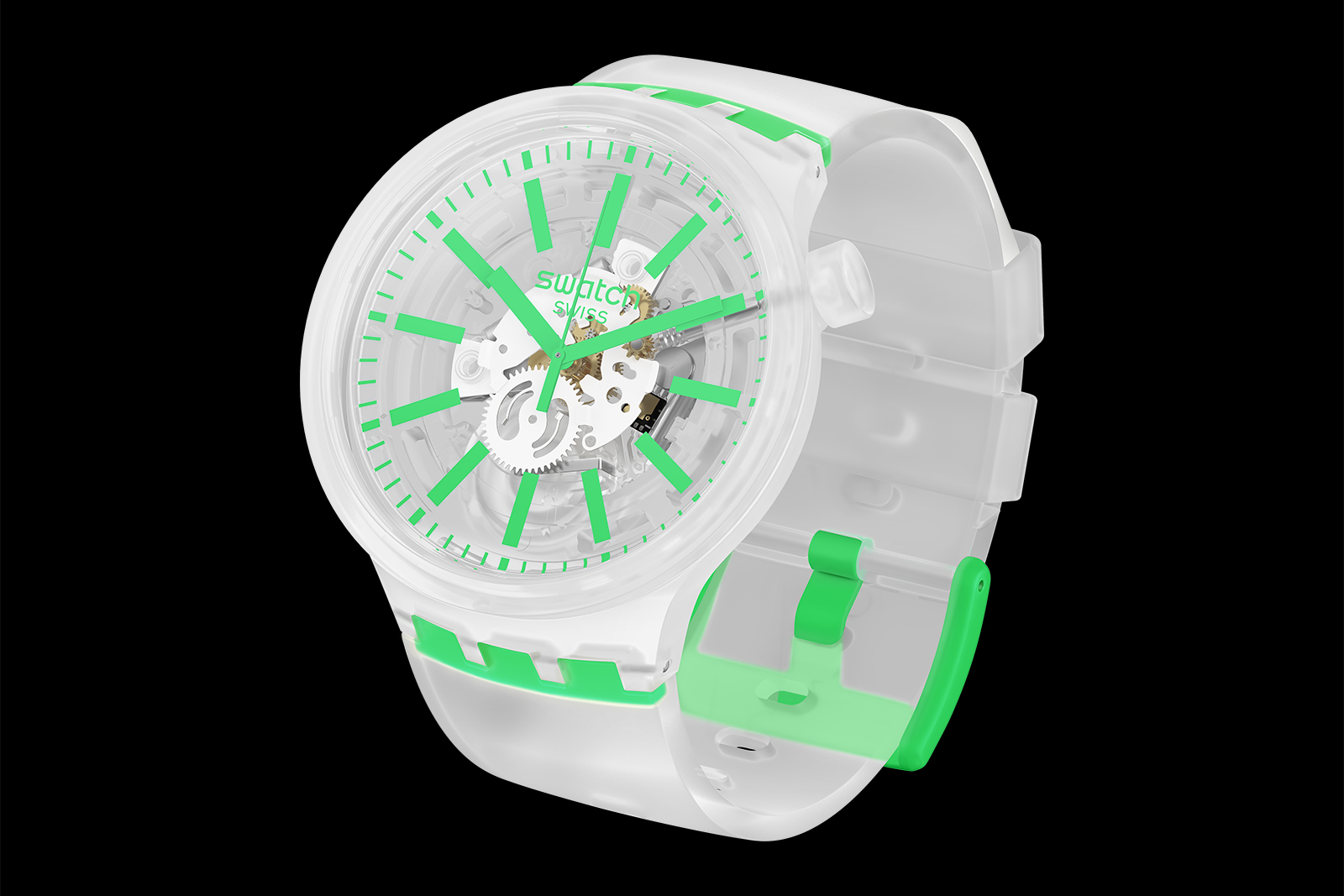 The Big Bold Jelly Neon is also the boldest and most vibrant variant of the model to date, thanks to the punctuating accents of colour on the face, which even extend to the lugs and the buckle. They are welcome additions to the “jellyfish” aesthetic, making the watch even more striking than the previous Big Bold Jelly and encapsulate the essence of Swatch – fun, cheerful and eye catching. And the colours also make the watch a good choice for the trendy who are into accessorising; the Big Bold Jelly Neon pairs well with street and casual wear.

Ultimately, the Big Bold Jelly Neon is one of those watches that I can see myself gravitating towards when I am in the mood for fun, laid-back outdoor activities; the fluorescent appearance gives it a very outgoing personality. And it is also a pick-up-and-go watch, thanks to the quartz movement and very affordable price tag. 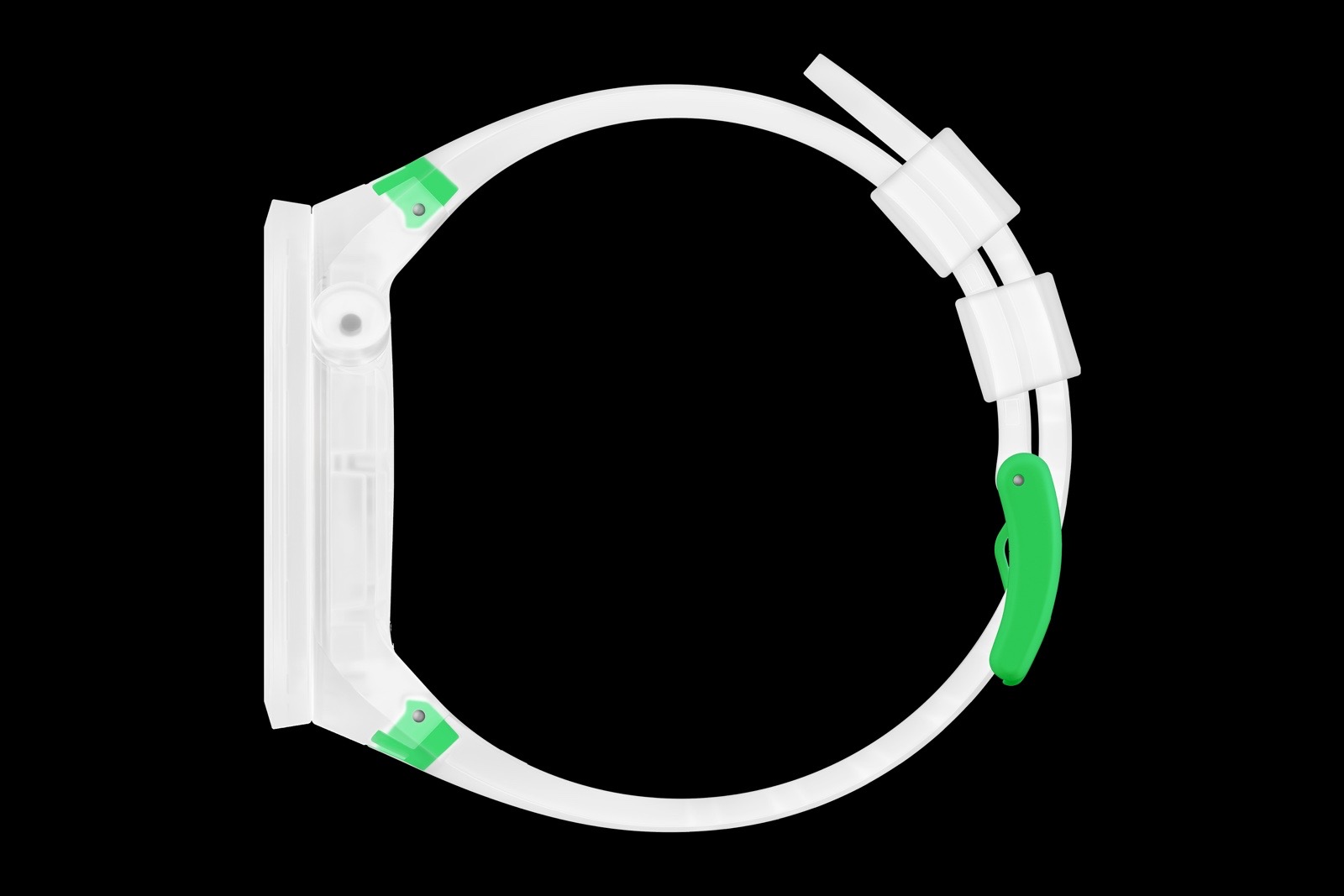 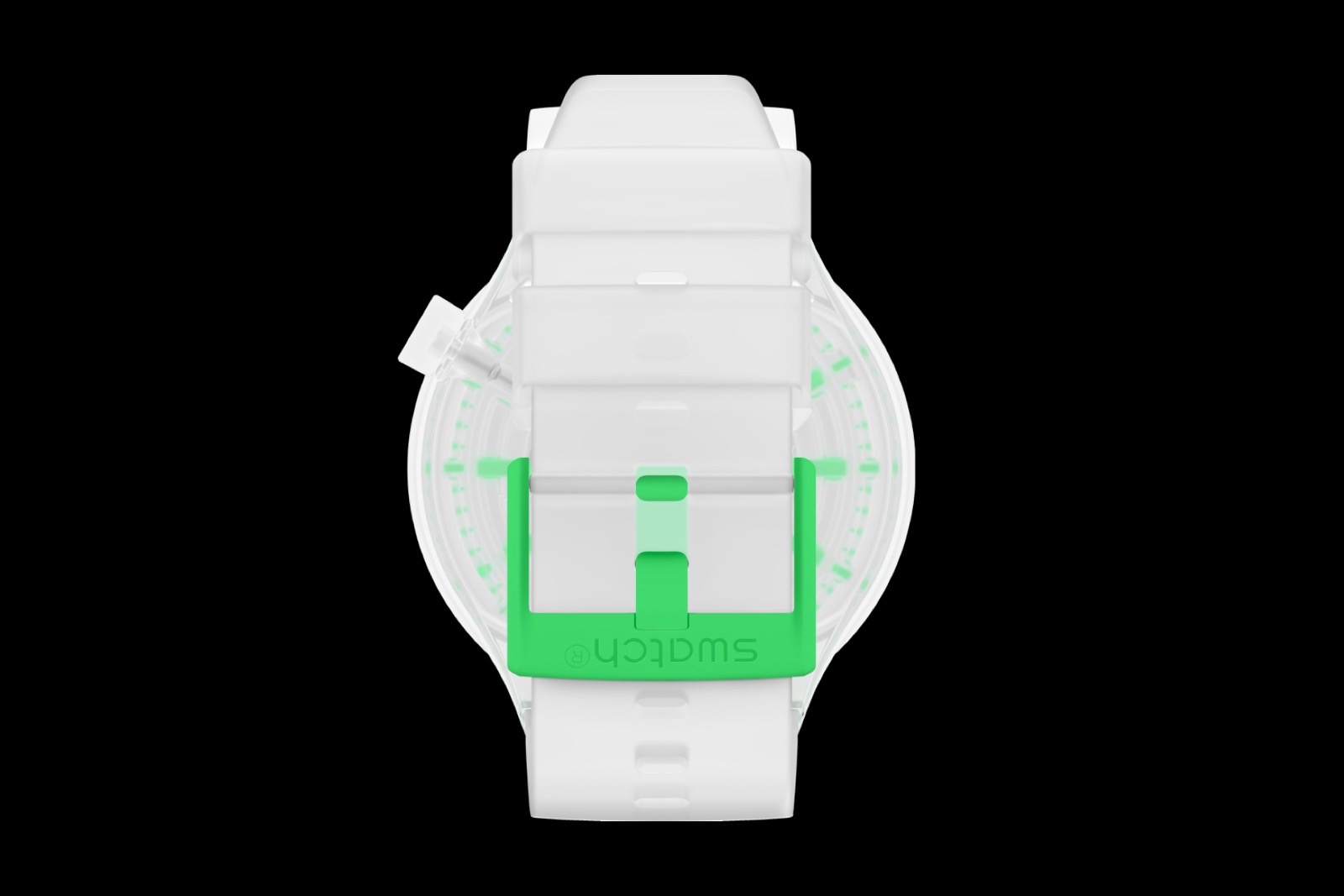 The spirit of Swatch

To better understand the appeal of Swatch watches such as the Big Bold Jelly Neon and what they stand for, a quick brand history is in order.

Cofounded by Nicolas Hayek in 1983 in the aftermath of the Quartz Crisis, Swatch was a revolutionary product at the time. Hayek and his co-founders realised that, in order for Swiss watchmakers to recapture the entry-level watch market, an affordable watch that was also appealing and collectible was needed.

Combining a plastic case and reliable quartz movement, then iterated into thousands of colourful designs – including the original Jelly Fish – Swatch watches managed to do exactly that, and they became a huge hit. In just under a decade after launch, 100 million Swatch watches had been sold.

Swatch mania became a thing in the 1980s and early 1990s, when overnight queues were the norm before the launch of a new limited edition watch. At Christie’s Swatch Classics auction in 1992, several watches sold for over US$20,000, including a Kiki Picasso that sold for the equivalent of US$21,871. The phenomenal commercial success of Swatch helped bankroll the formation of what is today the Swatch Group, Switzerland’s largest watchmaking conglomerate and owner of Omega, Longines, and Breguet.

The brand’s founding spirit of being fashion forward, affordable, and collectable is very much found in the Big Bold Jelly Neon. 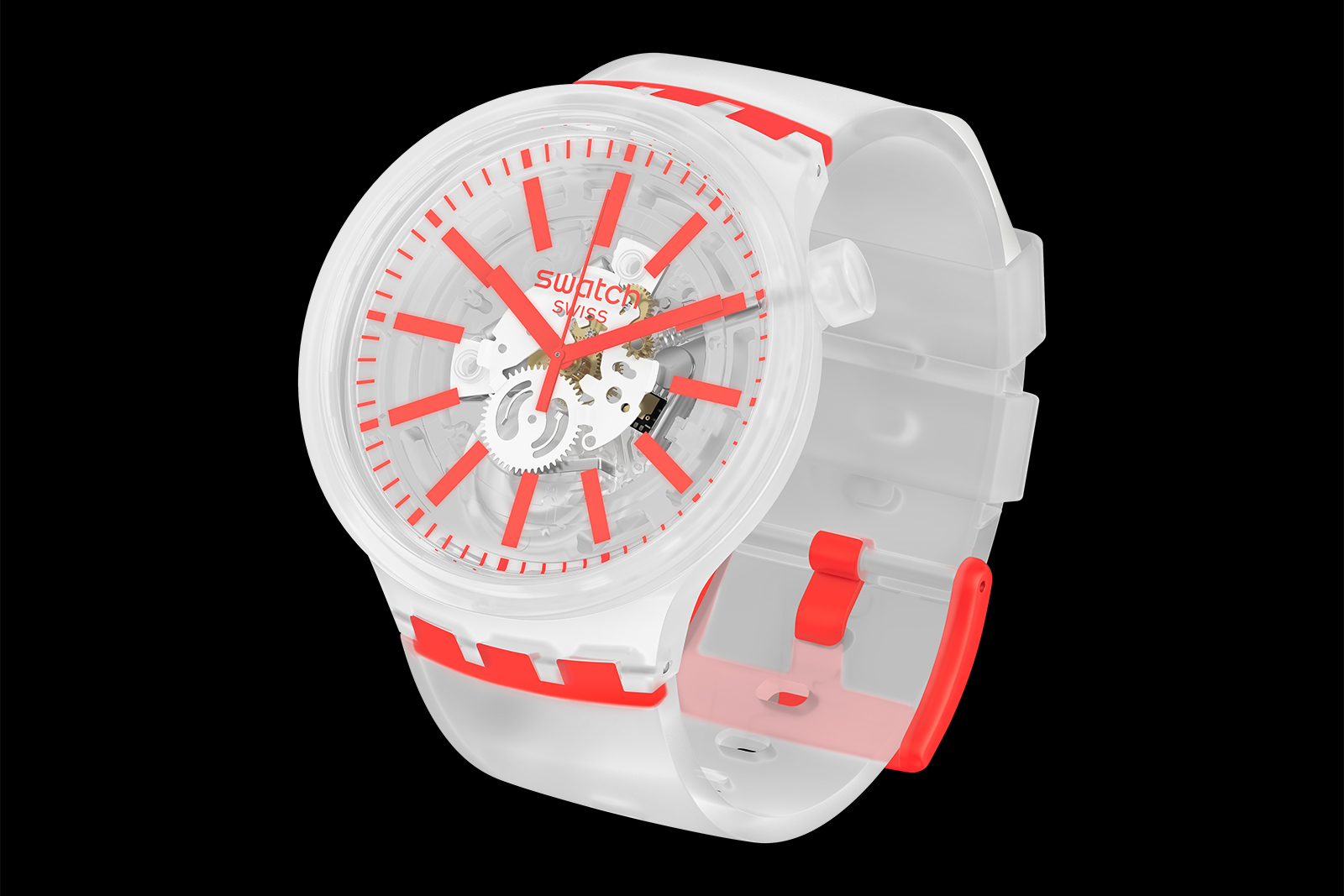 Availability: Now at Swatch stores
Price: US$110; or 155 Singapore dollars 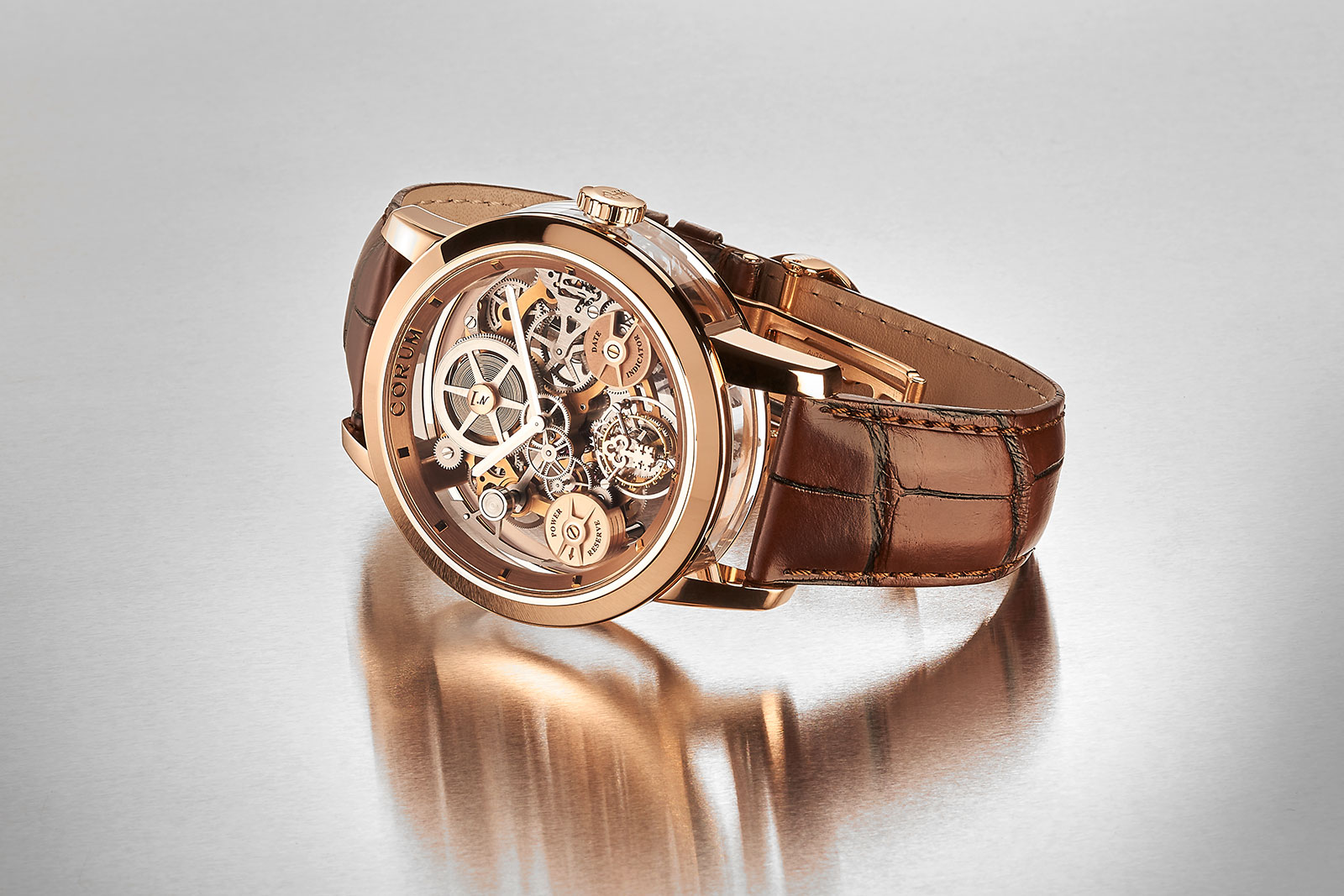 While Corum’s high-end watchmaking is typically associated with the tiny Golden Bridge movement, the brand’s latest creation is a surprisingly intriguing calibre with a novel construction. The Lab 02 is a tourbillon with vertical power reserve and double-disc date – entirely constructed as a “flying”, or “floating”, movement. Almost all of the wheels are secured only on one side, leaving them seemingly suspended in midair.

The Lab 02 has a genuinely interesting movement inside. A “flying” construction is not new, but it is usually applied to a key parts, like the barrel or tourbillon, for aesthetic effect or to keep the movement as slim as possible. Here the whole movement is flying, which results in a strikingly airy mechanical landscape. In fact, the Lab 02 is essentially a more complex execution of the concept behind the Ulysse Nardin Executive Tourbillon Free Wheel.

Because of its construction, the movement is large, which means the watch is huge – 45 mm wide and 13.4 mm high. But it is a necessity due to the mechanics and probably enhances the visual effect of the movement construction. 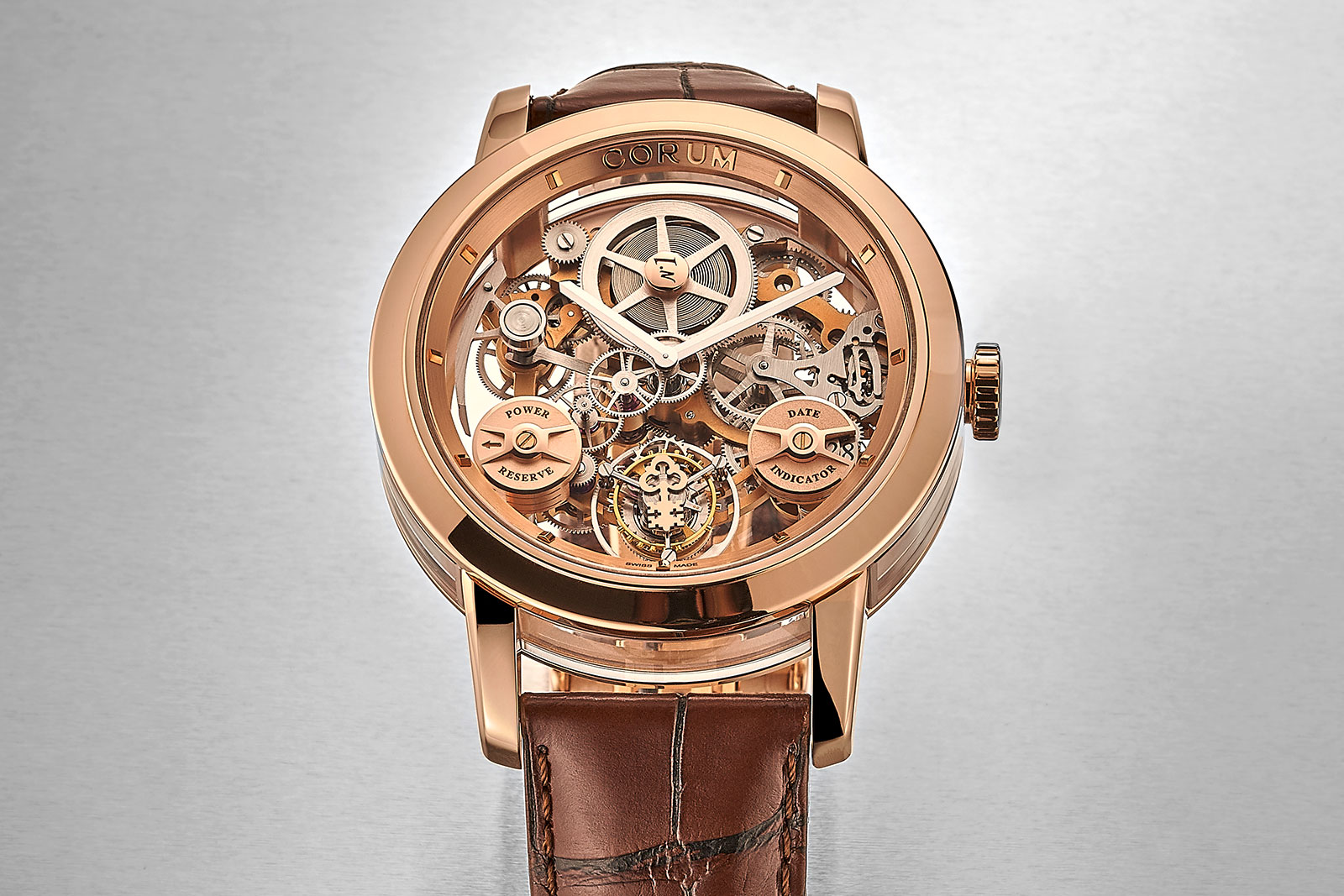 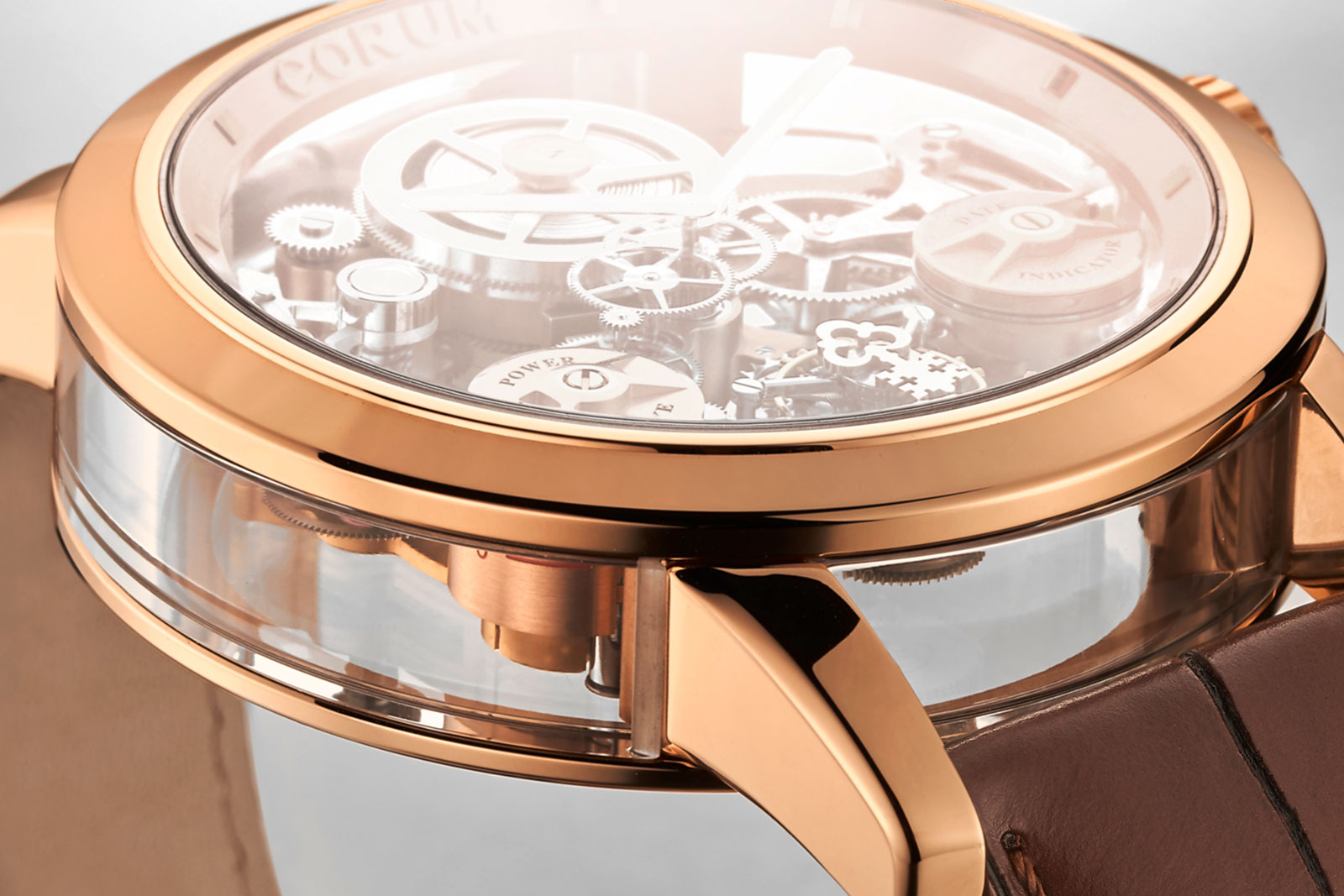 Harder to swallow is the price of 180,00 Swiss francs that puts the Lab 02 in a price segment where many well-established haute horlogerie brands compete. That’s especially so given the movement finishing appears adequate (neat and clean but mostly done with mechanical means) rather than excellent.

Admittedly, most other watches in the price segment are not as novel in terms of construction, but Corum doesn’t have enough of a name in high-end watchmaking. And that’s probably why the Lab 02 is a limited edition of just 10 watches.

The CO 300 movement inside the Lab 02 is the work of Le Cercle des Horlogers, a complications workshop that specialises in tourbillons. Located in Neuchatel, Le Cercle des Horlogers is also responsible for the movements in Jacob & Co. Twin Turbo Furious and the Kees Engelbarts Argentium Tourbillon we recently featured.

The movement has a single main plate on the case-back side, with everything built on top of the plate. Notably, the main plate is actually made up of several parts in two materials – skeletonised brass bridges that are clearly visible, as well as clear sapphire plates filling up the spaces in between. 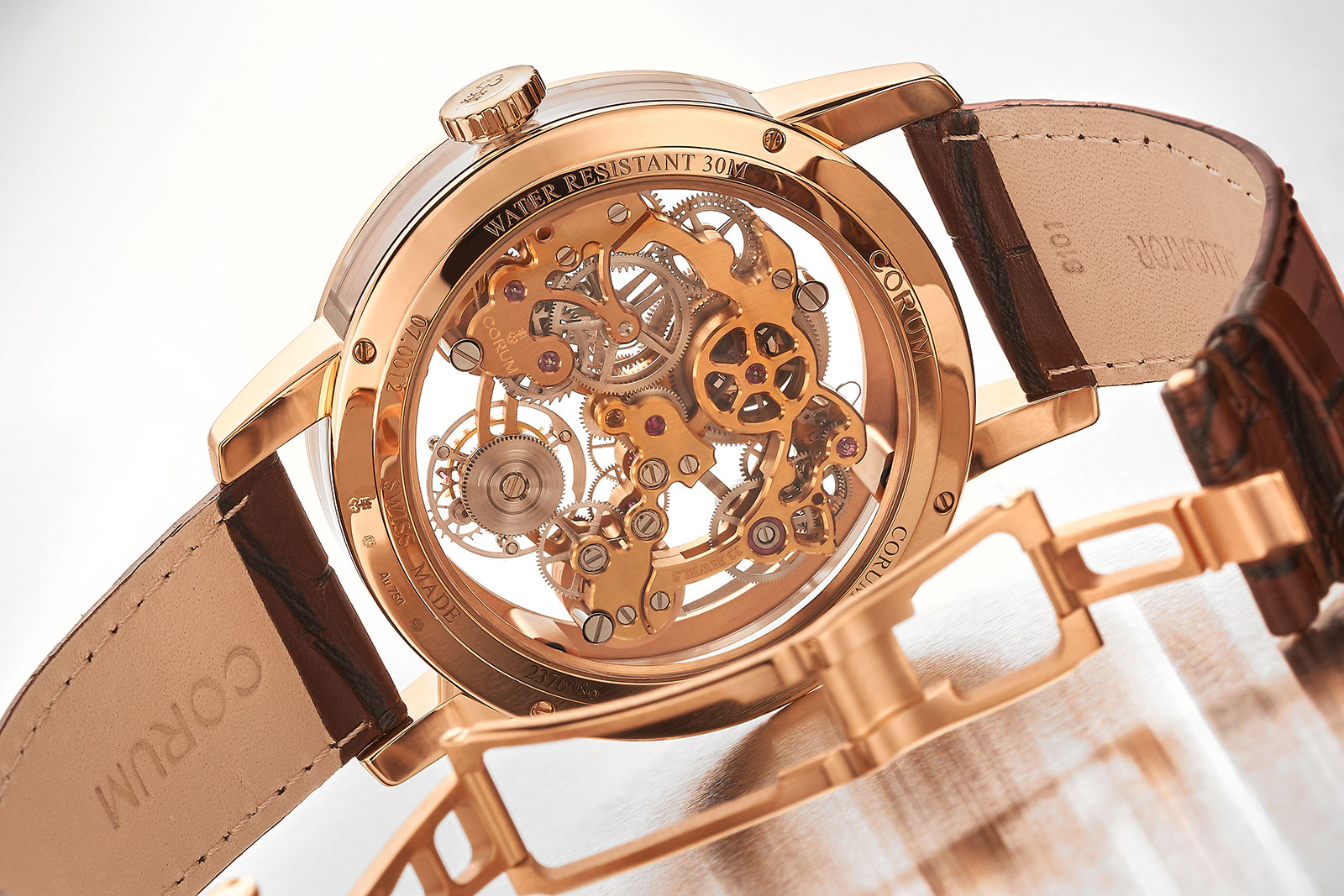 A large, open barrel sits 12 o’clock, with the flying tourbillon, topped by a the Corum key logo, at six. On each side of the tourbillon are the power reserve and date respectively. Though the date display is relatively small, it is indicated by a pair of discs, one for each date numeral. This was done to keep the footprint of the date discs as small as possible, likely due to space constraints as well as to avoid getting in the way of the airy look of the movement. 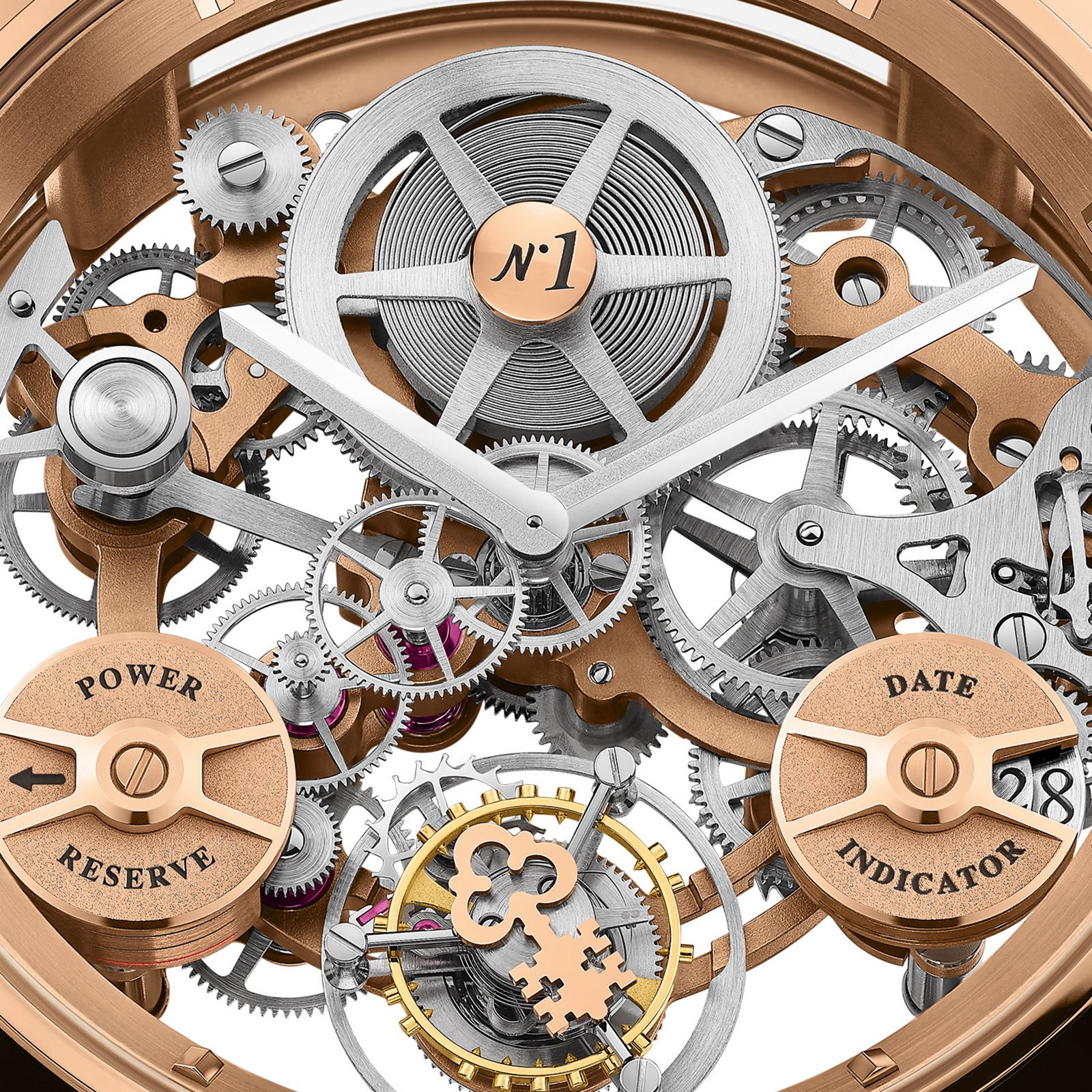 The power reserve is also unusual. It’s visible through the sapphire window on the side of the case, with a long, arrow-tipped arm pointing to a vertical hours scale. Relying on a differential-gear based power reserve mechanism, the arm travels up and down an endless screw as the mainspring winds up and down respectively. 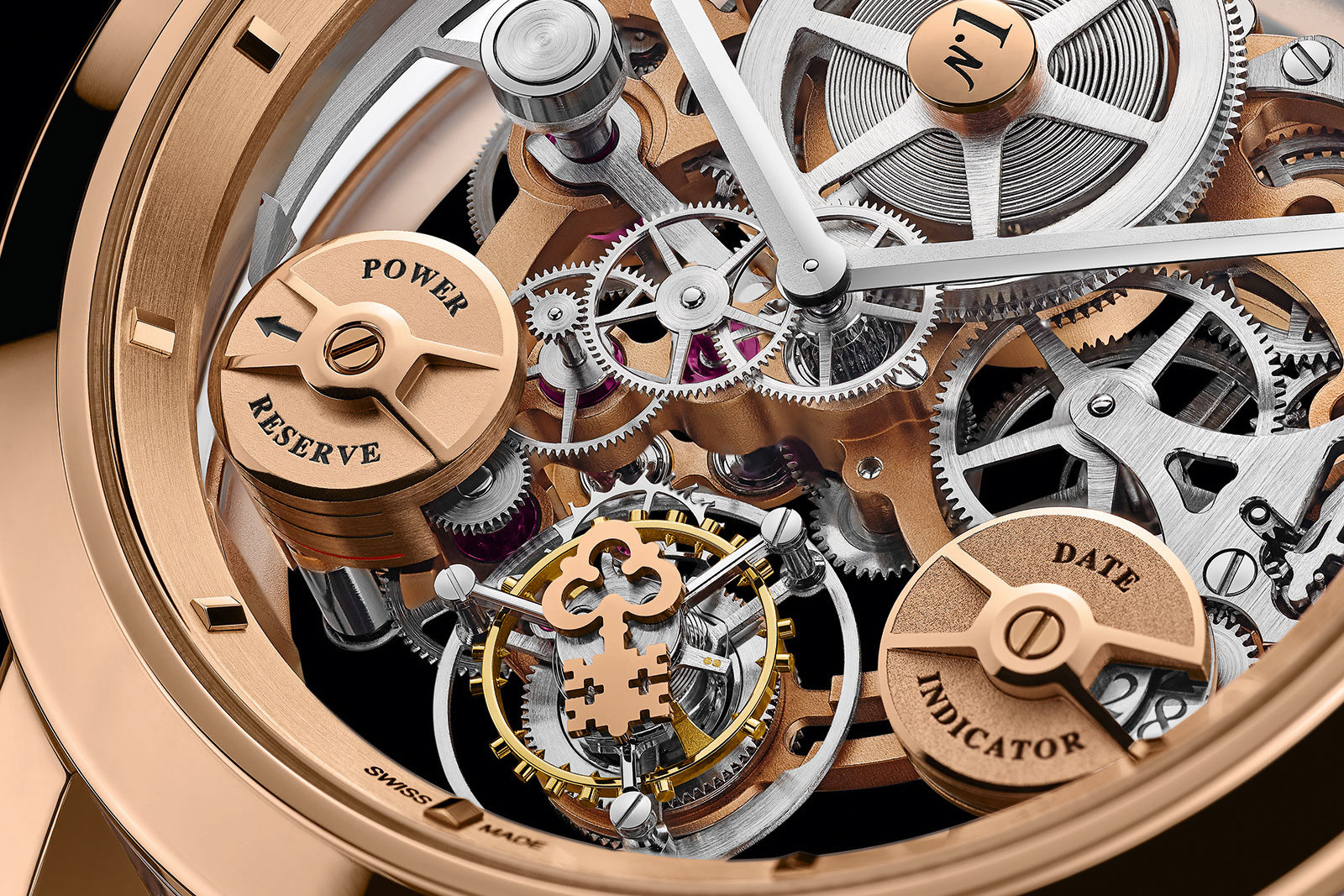 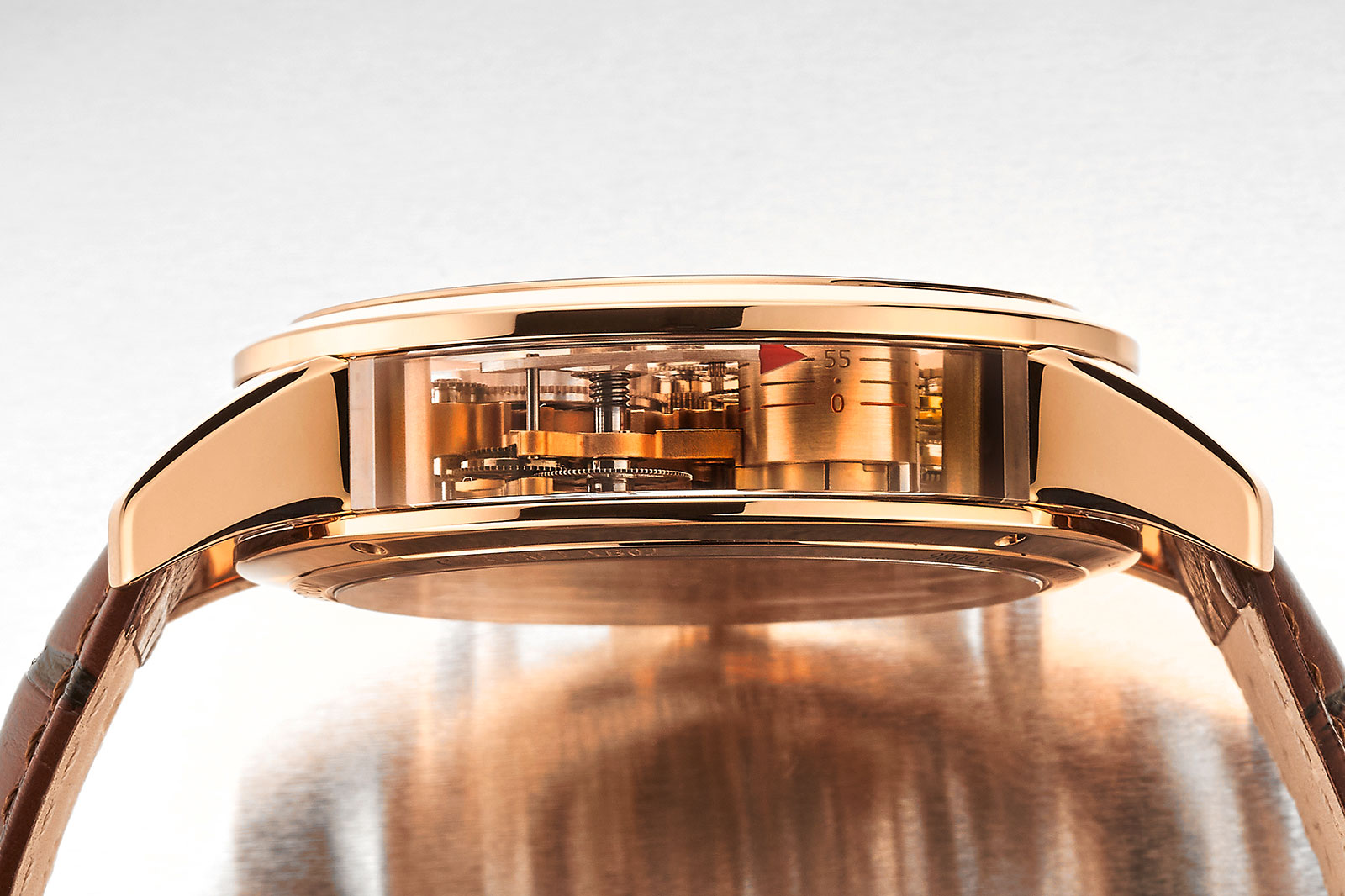 The Lab 02 will be produced on request, with most elements of the case being customisable. The case is offered in white or rose gold, as well as with gem setting, engraving, and other decoration. Only 10 will be made across all variants.

Just 8.34 mm high, the Arnold & Son UTTE Skeleton is the thinnest open-worked tourbillon on the market.