With the Freak being the undisputed flagship complication of Ulysse Nardin – as well as a historically important watch – many of the brand’s other technical accomplishments often go under the radar.

One intriguing offering that hasn’t gotten much attention: the Executive Tourbillon Free Wheel. Despite the somewhat dull name, the Tourbillon Free Wheel is a compelling reinterpretation of a mystery clock – where the mechanics are artfully hidden and exposed for visual effect – that is both fascinating and exotic. 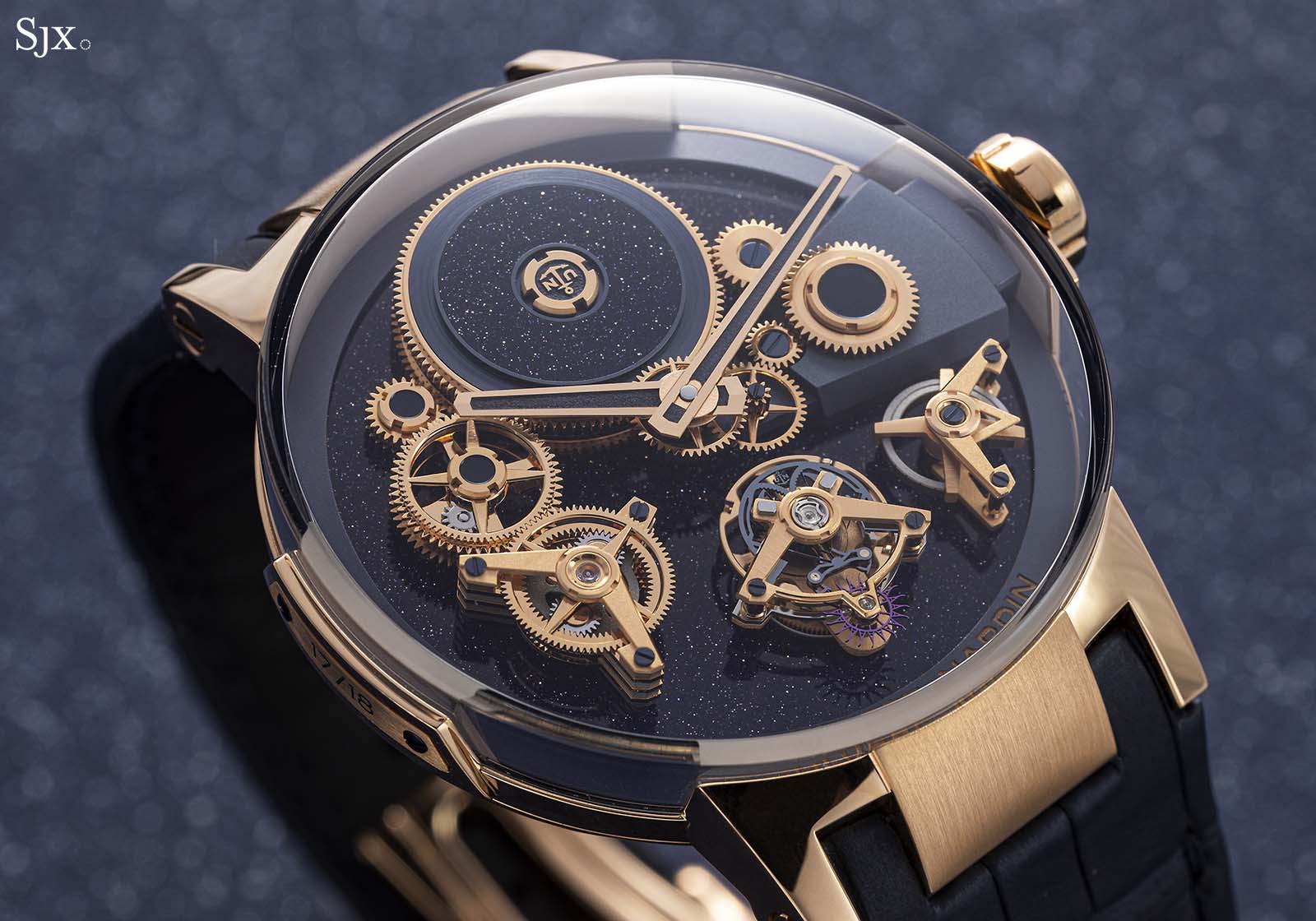 The Executive Tourbillon Free Wheel with an aventurine dial

While the base model of the Executive collection features a largely conventional, open-worked movement, the Tourbillon Free Wheel takes things a step further by elevating the crucial parts of the movement like the barrel, tourbillon regulator, and gear train for the power reserve.

In fact, most of the components are “floating” – the movement boasts a flying tourbillon, a “flying” gear train and power reserve indicator, as well as a “floating” barrel. At the same time, the construction is inverted, with parts that are usually hidden sitting exposed, and vice versa. As a result, the tourbillon and power reserve display appear to operate in isolation, with no obvious connection to the rest of the movement.

While much of the gearing is hidden underneath the dial – which doubles up as the base plate – most of the moving parts are “floating” – anchored only by pinions on the underside and without a bridge. That explains why the movement appears to have been constructed upwards, towards the wearer, rather than being arranged flat on a single plane as in an ordinary movement.

But the construction of the movement is not just a static display – because of the exposed gears, winding the movement quite literally animates it.

Despite its unusual looks, the movement in the Tourbillon Free Wheel is laid out in a largely conventional manner, in the sense that the tourbillon is at six, with the mainspring at 12 o’clock, and the visible motion works in between the two. The result is a fairly balanced layout, with wide space of the dial mostly occupied. 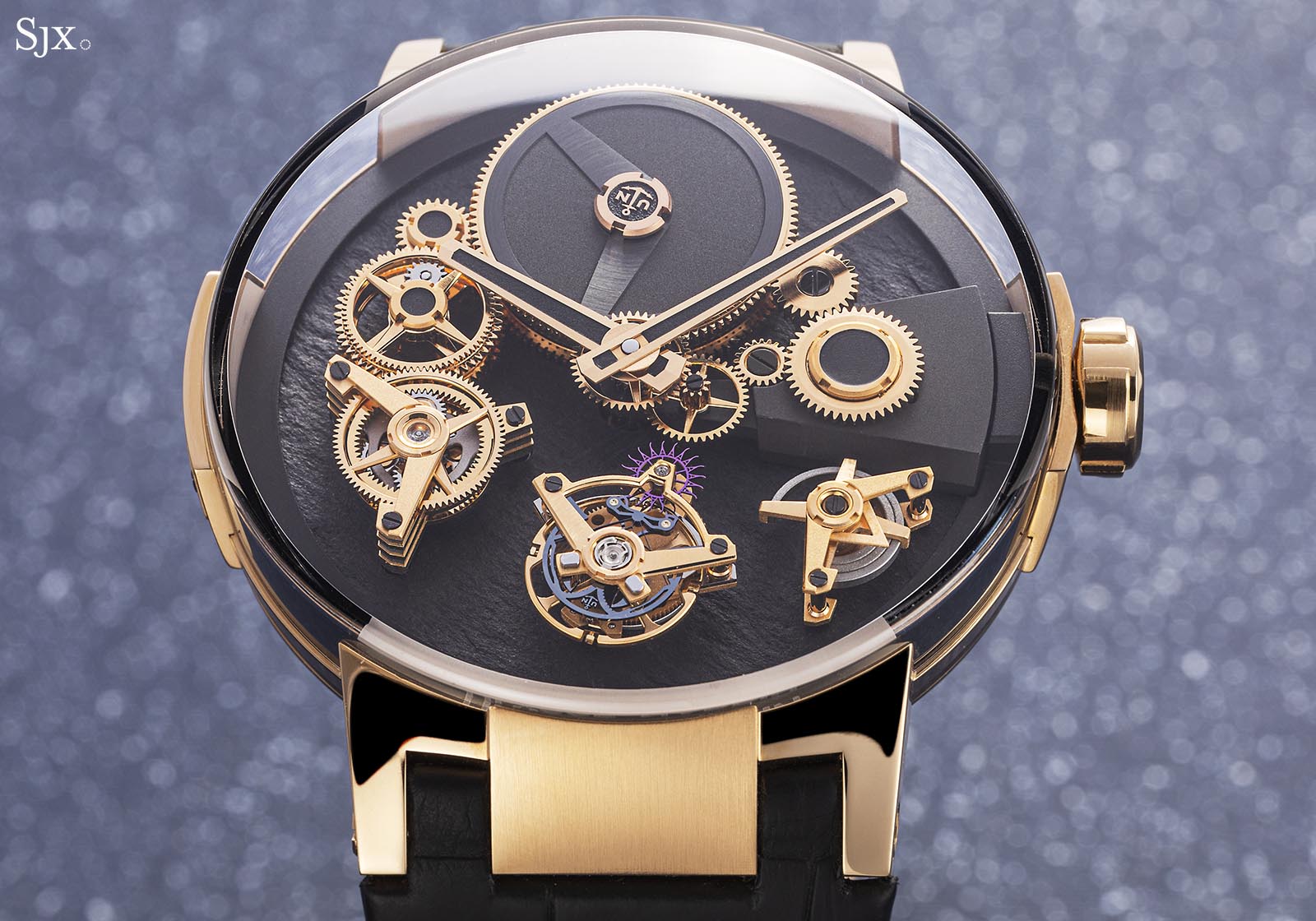 The version with a slate stone dial

The hand-wound UN-176 inside is a large movement equipped with an huge barrel with a single, long mainspring that has a power reserve of seven days. On the lower left of the barrel is the dedicated gear train serving as part of the power reserve mechanism, with attention centred on the planetary gear held in place by a boomerang-shaped bridge. 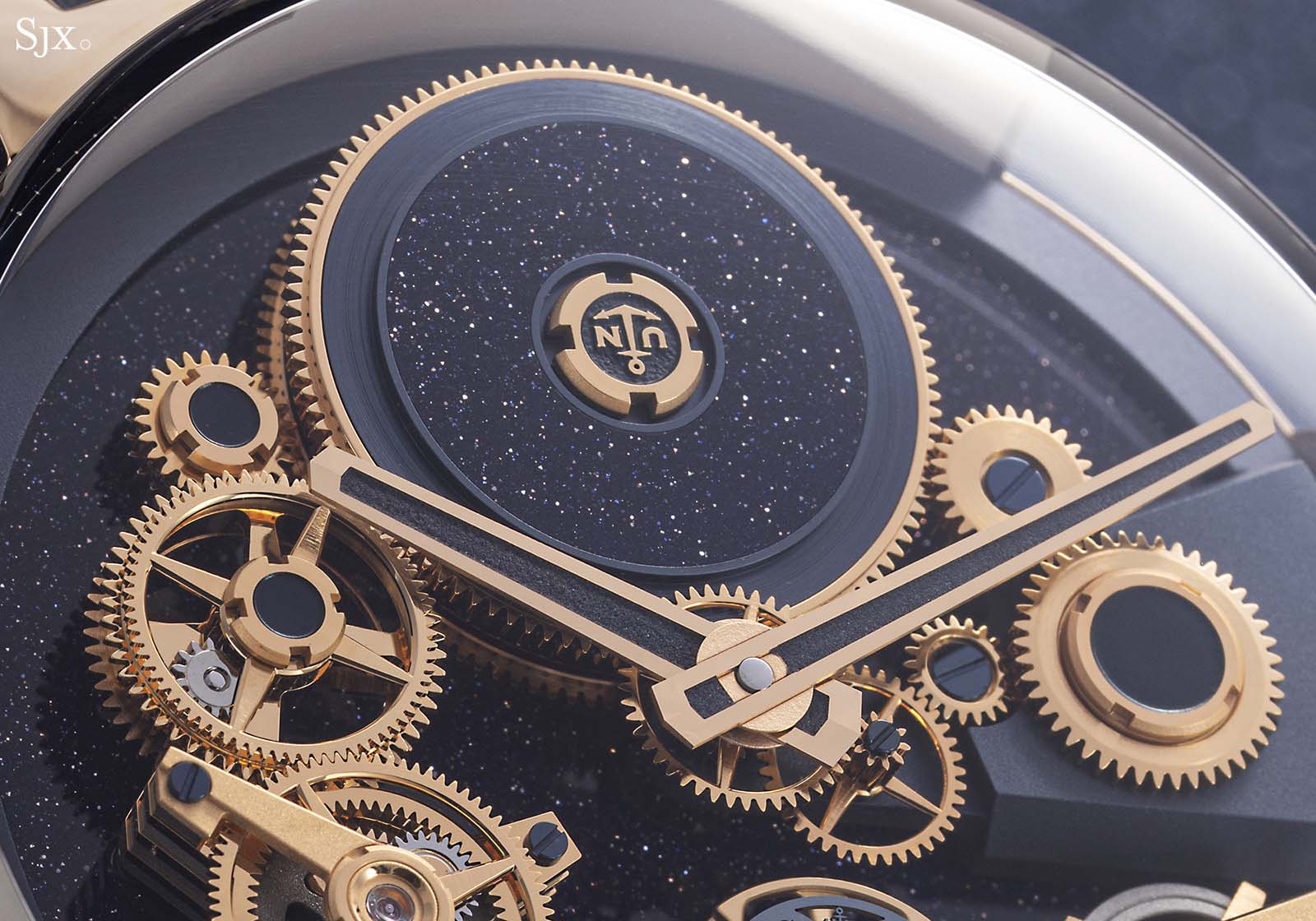 The large barrel at 12 o’clock, decorated with a disc in the same material as the dial The keyless works that wind the mainspring and set the time

This bit of mechanical theatre makes it seem that the mechanism and display are not connected physically – and it also serves to balance the visual elements on the dial – but they are of course linked, via simple but smart double rack. It’s essentially a long U-shaped lever pivoted at a single point, which has racks on each end. One rack connects to the reduction gear train and the other connects to the indicator. Similarly, the going train that powers the tourbillon is also concealed behind the dial.

The “floating” bits of the movement add a layer of complexity to its assembly, as extra-long pivots are required to link the “floating” parts to the hidden gears below. The challenge lies in installing the gears above while ensuring the pivots are perfectly vertical, which requires more time as the shafts lengthen. 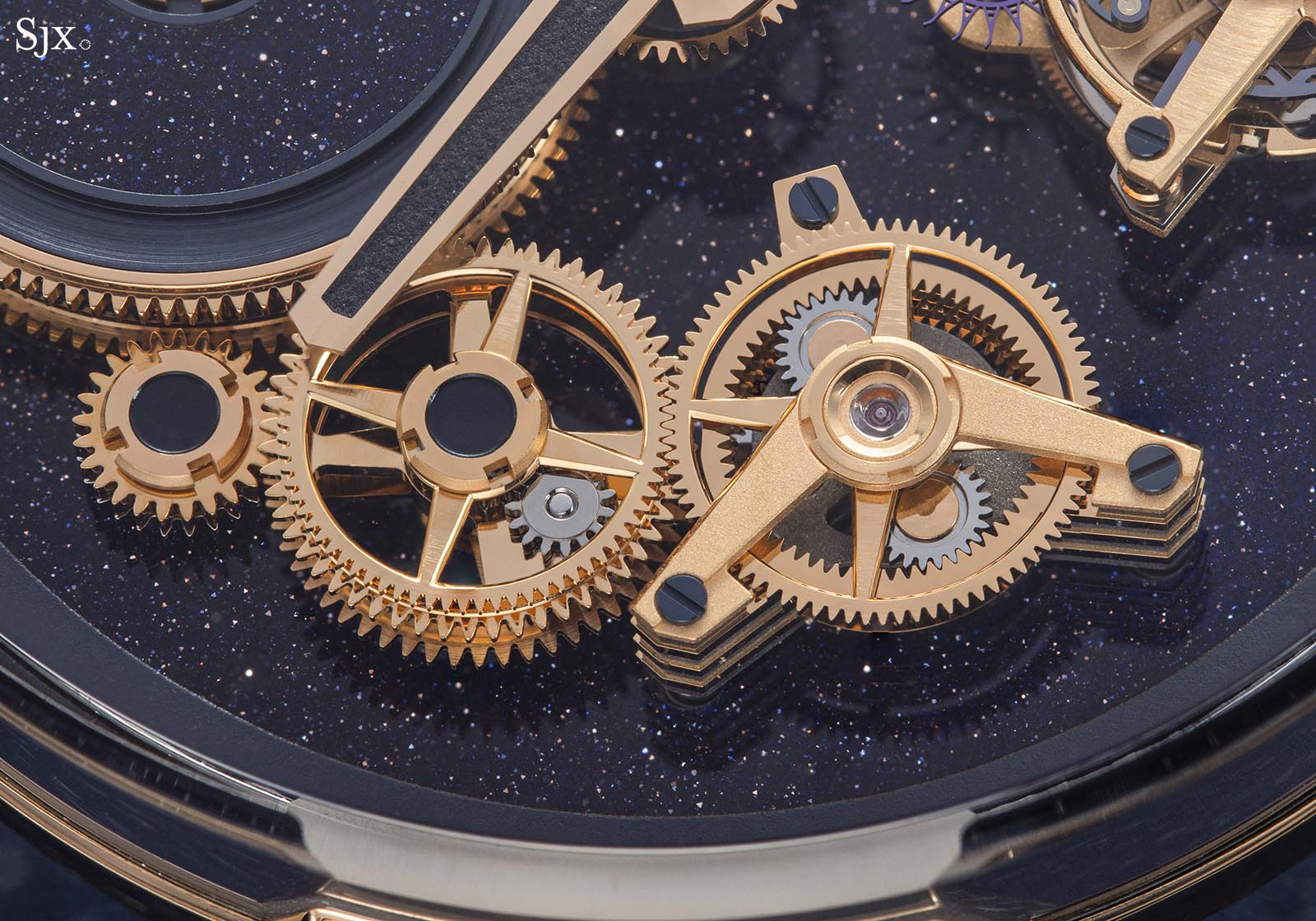 The flying tourbillon is equipped with the brand’s signature Ulysse Anchor Escapement. Although the proprietary escapement can also be found in other Ulysse Nardin watches, it has the greatest visual effect in the Tourbillon Free Wheel, sitting high above the dial and unencumbered by any bridges.

The upside of a true constant force escapement means the constant impulse from the escapement is delivered directly to the balance, eliminating a host of variables that could arise if it was positioned elsewhere in the movement. The fairly common and traditional remontoir d’egalite, for instance, relies on a secondary alloy spring to deliver power to the escapement in small doses; but the spring itself has slight variations in torque, while also creates its own energy loss through friction. 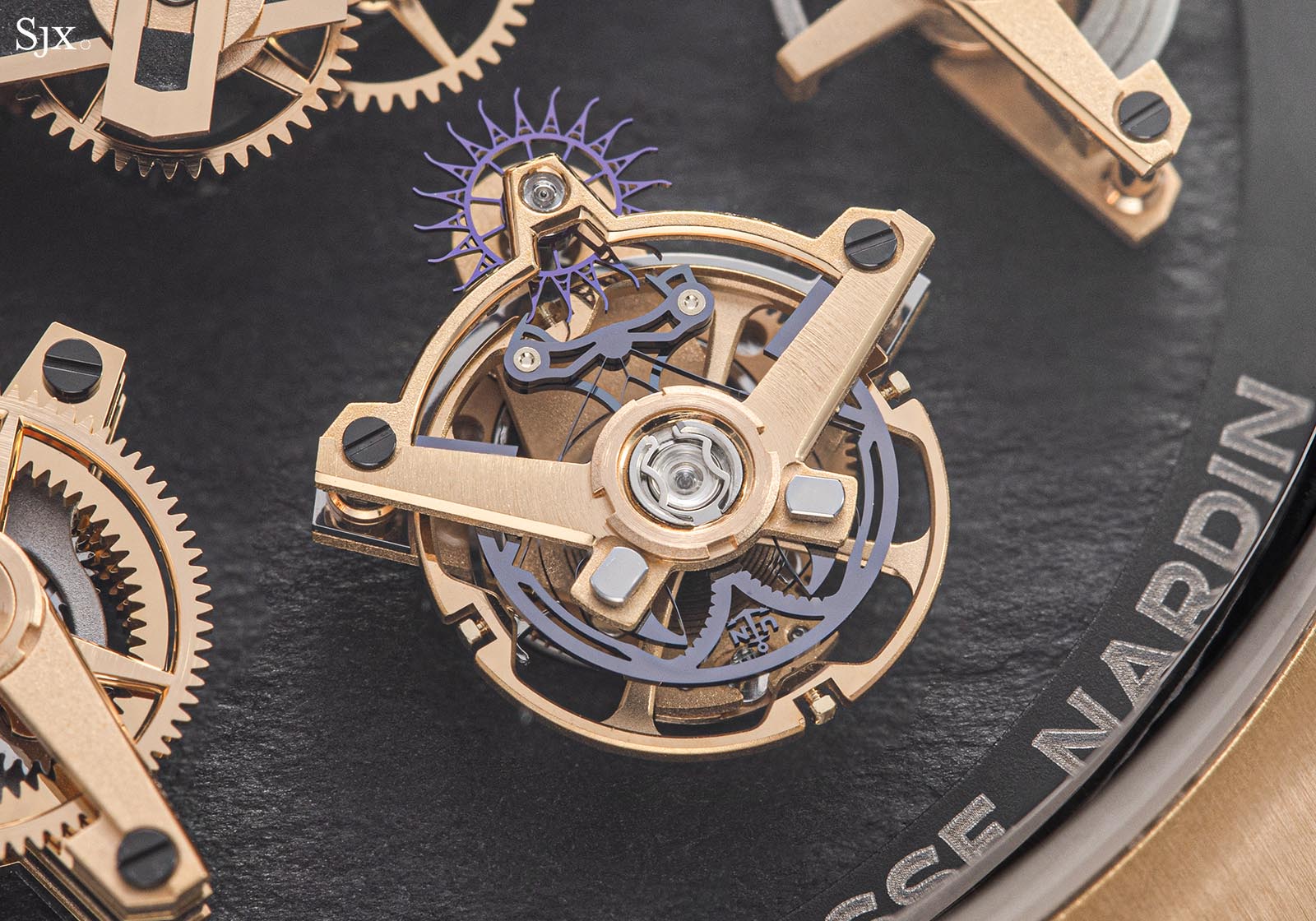 The flying tourbillon that seemingly floats

Like Girard-Perregaux Constant Escapement, the Ulysse Anchor Escapement relies on the slight elasticity of silicon to create constant force. The pallet lever is essentially a compliant mechanism, a single piece of silicon that has no pivots or joints but is able to flex at certain points.

A circular silicon frame holds the lever in place, with the motion of the lever being controlled by two perpendicular, buckling blades of silicon integrated into the frame; each blade converges on the pivot point of the lever thereby controlling its back and forth action. Both blades flex between fixed ends with an equal amount of energy needed each time to buckle them, thus supplying constant force to the balance wheel in operation.

Because the blades require only a tiny bit of energy to flex, they deliver constant force regardless of the torque from the mainspring. 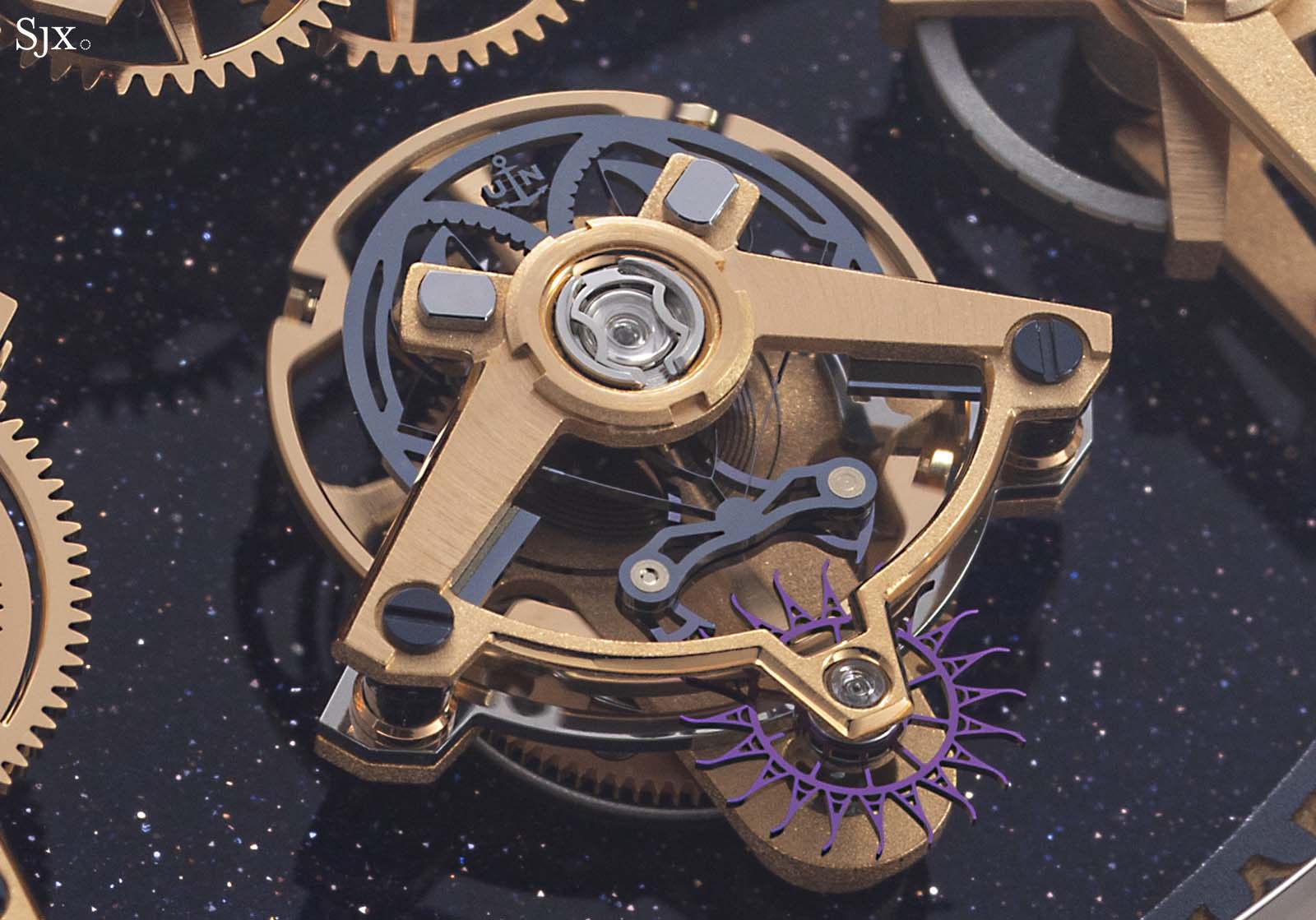 The physical properties of silicon enable not just the constant force function, but the very shape and design of the escapement. The unusually intricate escape wheel and pallet lever are only possible in silicon, because they are too complex to be executed in traditional alloys.

The specialised process of deep reactive-ion etching (DRIE) used to produce silicon components allows for highly complex shapes on multiple dimensions, which allows the frame, lever, and escape wheel to be skeletonised, reducing their weight to a minimum. In fact, the silicon escapement parts would be excessively heavy if they were made of metal.

And the silicon parts also operate with virtually no friction, meaning no lubrication is needed. Coupled with the relatively small balance wheel, the entire set up operates in an energy-efficient manner.

With the mechanics being a crucial part of the design, much attention has been devoted to maximise the contrast of the moving parts.

Contrast is achieved not just with colour, but also surface finish. Most of the visible components are gold-plated, while the screws are polished and then black-coated. On the other hand, the recessed centres of the pivot caps on the wheels are filled with a matte black lacquer. And the jewels visible on the front are clear, instead of the conventional red, keeping the colour scheme consistent. 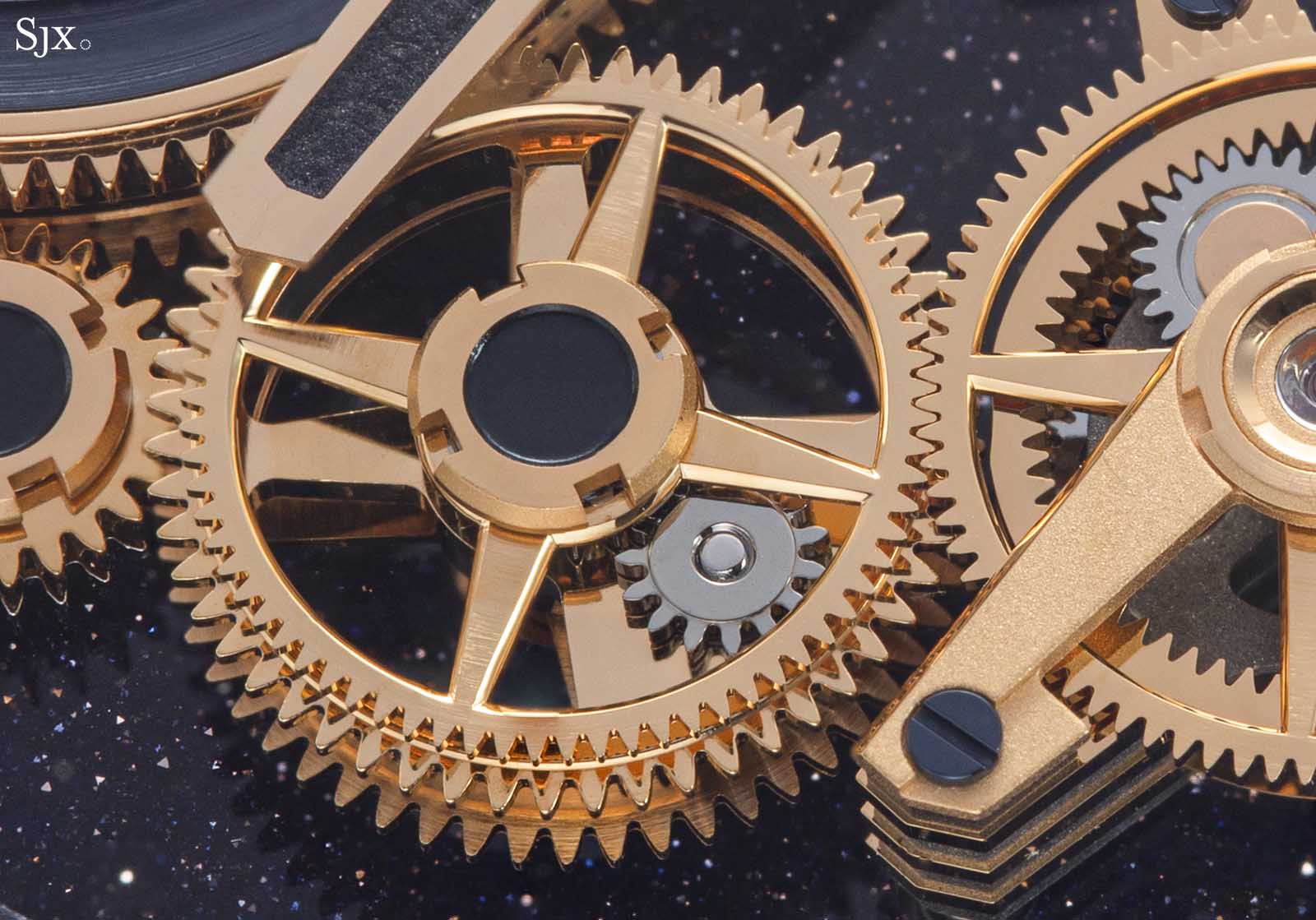 The small planetary gears in the differential are in steel, albeit by necessity for harder-wearing teeth

Perhaps because the architecture of the movement is fairly minimalist, the attention to detail on the visible components is impressive. The finishing is notably fine, especially on the wheels – they have wide, polished bevels on the spokes and rims, along with sharp inward angles where the spokes meet the rim. On the back, the view is simple: it’s a full plate with a frosted, black-coated finish that is virtually empty save for a few jewels set in gold chatons. Intriguingly, however, the chatons are finished differently, with half being mirror polished, the usual finish for a chaton, and the other two frosted. Contrast the frosted chatons with the polished examples

At 44 mm wide and 13.5 mm high, the Executive Tourbillon Free Wheel is a massive watch. And the wide dial and lack of a bezel further accentuates its large appearance.

However, it is a lot more wearable than its dimensions suggest as the case band is less than half the height – most of the height is transparent sapphire crystal. To ensure an unimpeded view of the dial components, the crystal is a highly domed “box-type” – the crystal is so high it resembles the glass dome of a cake plate – giving the dial a strikingly airy look. The strap attachments are a variation of the brand’s trademark integrated, triple lugs. While the standard triple lugs are equal in size with a uniform finish, this has a sleeker profile with a wider, brushed central lug flanked by narrow, polished side lugs.

Even though the lugs have been redesigned, the triple lugs still look clunky and unnecessarily complicated; they draw attention away from the interesting dial and movement. And the lug style also calls for an integrated strap with a stiff insert, meaning it doesn’t quite conform to the wrist.

Of all the elements in the watch, the lugs are the only ones that can be meaningfully improved. The Tourbillon Free Wheel was originally launched in either rose or white gold, with the dials in slate stone or honeycomb-grid respectively, both as part of the regular collection.

And last year, Ulysse Nardin unveiled a quartet of limited editions, each of 18 pieces and fitted with the dial in an exotic material. The dial options comprise osmium, a bluish-white metal from the platinum family; Carbonium, a carbon composite that’s environmentally friendly because it comes from offcuts generated by the production of aircraft bodies and wings; straw marquetry; and aventurine glass. All the iterations of the Tourbillon Free Wheel are striking, and also unusually elegant for such a large watch, mainly due to the delicacy of the components.

The version with the osmium dial is the least striking, because there is less contrast between the rhodium-plated movement parts and the silvery-blue osmium dial.

On the other hand, the aventurine dial offers the most visual spectacle, as it plays to the futuristic, slightly sci-fi look of the movement, creating the impression that the components are floating in space.

Tourbillon watches are common enough now that they are difficult to do differently. The Executive Tourbillon Free Wheel manages to be intriguing mechanically, aesthetically and conceptually, while being fairly priced as such things go, starting at US$96,000 for the base model.

In fact, with its unusual movement architecture and exotic escapement, the Tourbillon Free Wheel can be put in the same category of mechanical novelty as the Freak, though the Freak is indisputably an outlier and landmark in modern watchmaking.

Limited edition: Regular production in slate and honeycomb; 18 pieces each in aventurine, osmium, Carbonium, and straw marquetry
Availability: Already at Ulysse Nardin retailers and boutiques
Price: Ranging from US$96,000 in rose gold with a black slate dial, to US$102,000 for the osmium dial (or 147,700 and 156,900 Singapore dollars respectively)

Addition February 10, 2020: A brief explanation of the double rack that connects the power reserve indicator was added to the text, thanks to details provided by Stéphane von Gunten, the Research and Innovation Director at Ulysse Nardin and its sister company Girard-Perregaux.

The line-up includes several well-priced complications, including a tourbillon for less than US$30,000.