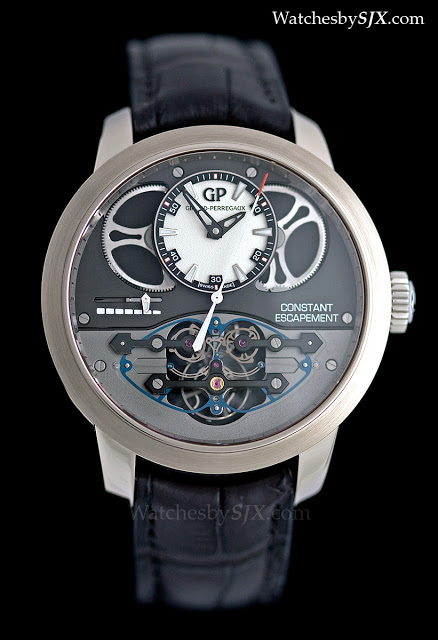 Winner of the Aiguille d’Or at the Grand Prix d’Horlogerie de Genève 2013, after coming to fruition after several years in development, the Girard-Perregaux Constant Escapement is one of the few true constant force escapement timepieces on the market today. The Girard-Perregaux Constant Escapement picked up the top prize at this year’s Grand Prix d’Horlogerie de Genève, even though it was first announced several years ago. Equipped with an actual constant force escapement, the watch is complex, but works on a simple principle. Intriguingly, the concept was developed by engineer Nicolas Dehon while he was at Rolex, which decided not to pursue it. Then Dehon joined Girard-Perregaux and revived the idea, culminating in the Constant Escapement wristwatch. Unlike the Romain Gauthier Logical One – another winner at the GPHG 2013 – which has the constant force mechanism before the gear train in the form of a chain and fusée, the GP has it after the gear train, integrated into the escapement. The escapement has twin escape wheels and a bow-shaped pallet fork that locks and unlocks the escape wheels, not unlike on a traditional Swiss lever escapement with a single escape wheel. The locking and unlocking of the escape wheels regulates the power discharged by the mainspring, and gives the watch its beat.

But attached to the pallet fork is a thin silicon blade, running horizontally across the, which is part of a diamond-shaped silicon frame. This silicon blade is what gives the escapement its constant force, or more specifically, constant impulse on every tick and tock. Visually the watch is modern and large, with the white gold case measures 48 mm in diameter. The linear power reserve indicator is at nine o’clock, for the week’s worth of running time the four mainsprings – two stacked in twin barrels – provide. But the bridges for the balance and escapement are arrow-shaped, just like the bridges of Girard-Perregaux’s most famous timepiece, the Tourbillon with Three Gold Bridges.

The bridges of the movement, as well as the spokes of the wheels, have curved, organic shapes, echoing the form of the silicon frame of the escapement. Another old school design element in the movement is the grand sonnerie style click at 12 o’clock on the movement. All the bridges are frosted and coated in black PVD, a finish which works surprisingly well with the overall design. This watch is much more attractive in the metal than in photos, despite the unusual design. But it is a pricey watch, with a retail of about SFr100,000, which is about US$112,000. If the technology pioneered here is successful over the long term, it will certainly make its way into more affordable timepieces. – SJX A modern take on the iconic Tourbillon with Three Gold Bridges, the Neo Tourbillon is now available in a DLC-coated titanium case that lets the gilded gears and tourbillon regulator take centerstage.