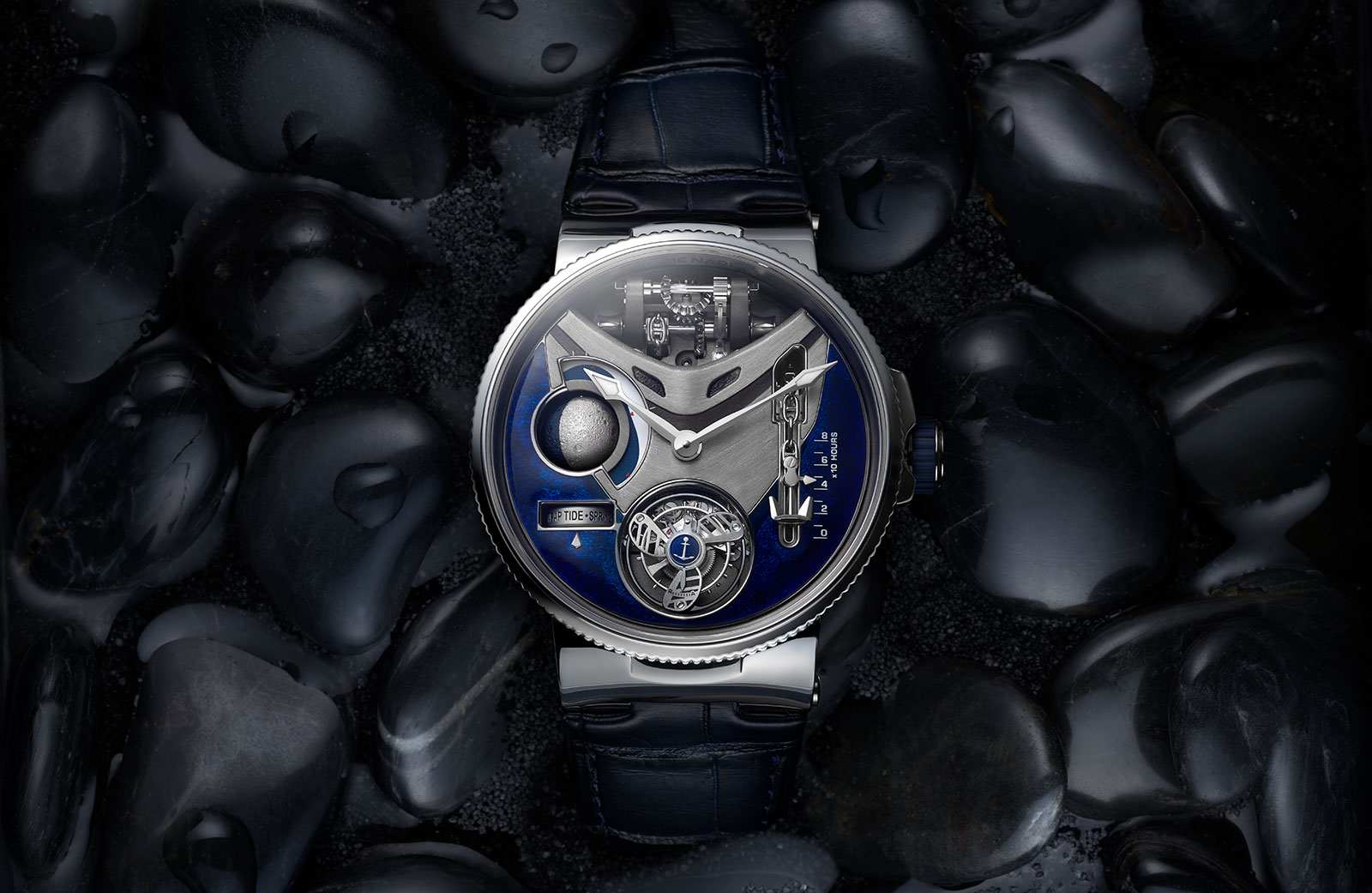 A watch inspired by “mega yachts” might seem like a novelty for a mega oligarch, but Ulysse Nardin has done it with a surprising degree of mechanical ingenuity. Elements taken from yachts, including an anchor and chain as well as a winch, are incorporated into the moving parts of the movement.

Like the inventive Grand Deck Marine Tourbillon of 2016, the Mega Yacht Tourbillon is also the result of a collaboration between Ulysse Nardin and Christophe Claret, which has been Ulysse Nardin’s go-to complications specialist since the late 1980s.

The UN-631 movement inside is hand-wound, with an 80-hour power reserve and a flying tourbillon at six o’clock. It’s made up of 504 parts, a high number that illustrates the extra bits required for all the nautical-themed indicators. The components for the sailing-inspired indicators

The one-minute tourbillon is the first nautical element of the movement, with its cage shaped like a propellor. Strictly speaking, the propellor tourbillon doesn’t quite fit the dial design, which shows the bow (or front end) of a yacht cutting through the waves. The dial is a disc of white gold, with the sea represented by deep blue vitreous enamel. To the right of the tourbillon is the power reserve indicator, taking the form of an anchor linked to a chain that travels quickly upwards as the watch is down, and back down at a slower rate as the watch is running.

At 12 o’clock sits an miniature anchor windlass, or winch, that is made up of several sets of bevel gears, or wheels that mesh with each other at right angles. The windlass works in tandem with the anchor power reserve, seemingly lifting and dropping the anchor. In reality the windlass is not mechanically linked to the anchor, but instead to the keyless works that wind the barrel. The wheels of the windlass turn when the watch is wound, but serve only a decorative purpose. Across from the anchor power reserve display is the spherical moon phase, made up of a blue and silver ball that’s been engraved to resemble the pockmarked surface of the moon.

Just beside the moon phase is a tide indicator that shows the height of the tides on a fan-shaped scale graduated from “-4” to “12”. This shows the sea level in real time, though it has to be calibrated for a specific location via the crown. And just below is a cylindrical display that indicates the range of the tide, either spring (strong) or neap (weak) tides. Here the crown function indicator shows whether the crown is engaged for setting the hand (S), or the moon and tide display (MT), or winding (W). It’s visible through a window on the side of the case, just beside the crown. The watch case is platinum and 44mm in diameter, with a water-resistance of 50m.