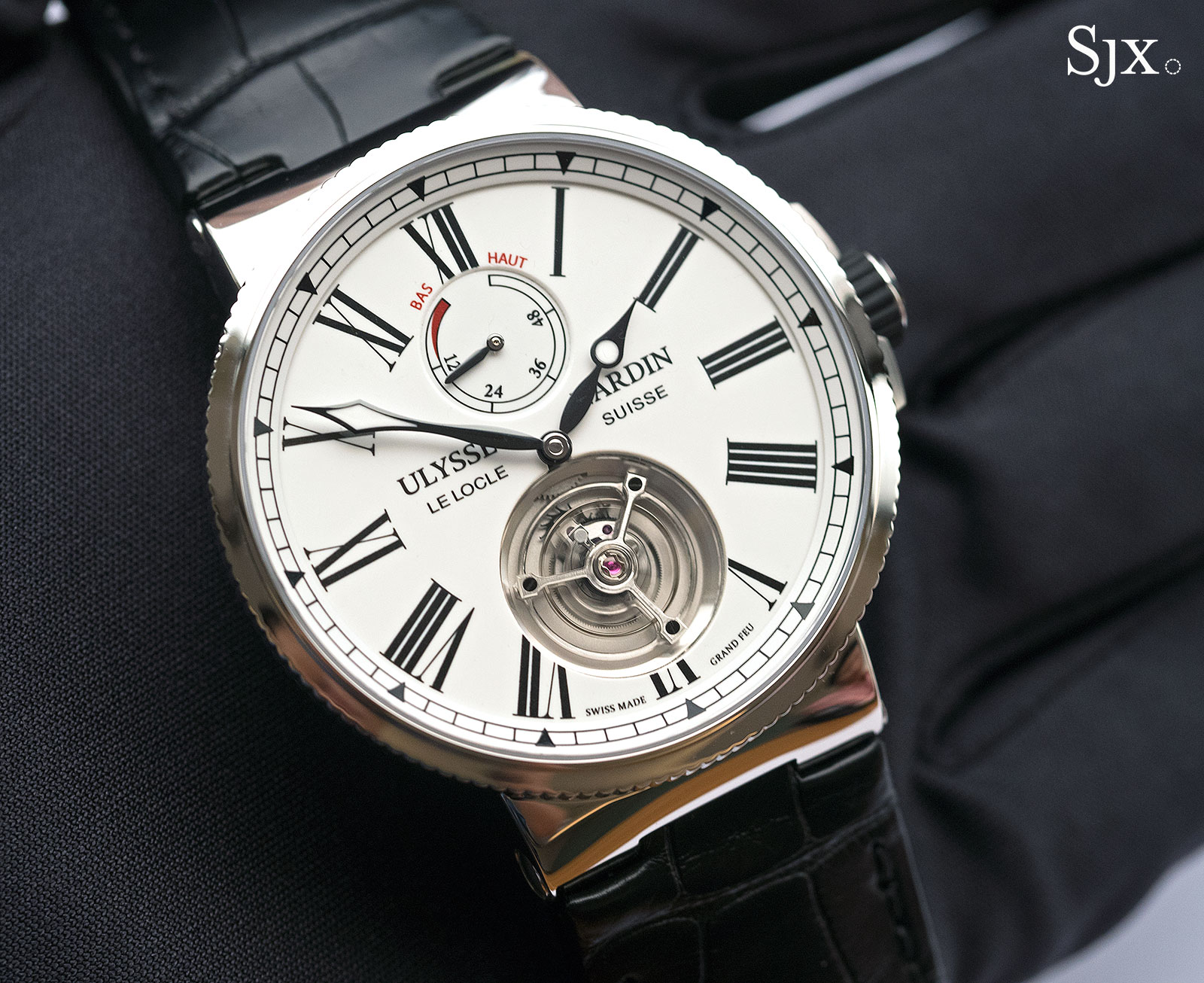 Make a cut-price watch with cut-rate features is easy. Putting together a properly outfitted watch at an affordable price, less so. Ulysse Nardin has managed it with the Marine Tourbillon Grand Feu. It’s a well executed with commendable features, most notably a flying tourbillon, in-house automatic movement and enamel dial – but priced below US$30,000.

Classical but distinctly functional, the look is one shared with most of the watches in the Marine range, one that’s based on vintage marine chronometers, the gimballed precision clocks once standard issue on ships. It’s characterised by extra-large Roman numerals and a power reserve display at 12 o’clock. Taking the place of the usual sub-seconds at six is the aperture for the flying tourbillon. While historical marine chronometers mostly had metal dials, the Marine Tourbillon has a fired, or grand feu, enamel dial. While generally rare in wristwatches overall, enamel dials are found on a surprising number of Ulysse Nardin watches, thanks to the fact that the watchmaker took over dial specialist Donzé Cadran in 2011, acquiring the knowhow needed to produce good enamel dials in sizeable numbers.

Made up of two pieces – the power reserve indicator is separate – the dial is evidently enamel: thick, white and revealing an uneven surface when magnified. While not an impeccable enamel dial, it is of good make and certainly adequate for the price. Or put another way, it is easy to spot similar or greater flaws on enamel dials in more expensive watches. Intriguingly the print on the dial is actually three tone. While the Roman numerals and lettering are black, along with red accents on the power reserve, the railway minute track is actually a dark blue. The black and blue are almost indistinguishable except in certain light or up close. Naturally, some compromises are inevitable when on a budget, and the dial features an interesting compromise. Instead of a hole drilled through the middle for the canon pinion that holds the hands – a step that can crack the enamel dial and increasing the rejection rate during production – the dial here is produced with two conjoined apertures, one for the tourbillon and another for the hands. Looking sporty in contrast to the dial, the case is a large, somewhat chunky form that’s 43mm in diameter and rated to 100m. It has mostly rounded edges and a generally simple shape. The lugs are integrated into the case and accommodate a strap with a stiff insert, making the watch feel larger than it is. Interestingly the pair of brushed and precisely shaped crown guards are separate from the case and screwed from the inside. They sit on each side of the crown that’s covered in a rubber ring, a feature that’s somewhat fashionable in the industry but doesn’t add much to aesthetics or function. The Marine Tourbillon is powered by the UN-128, an in-house movement that’s versatile enough to form a large family of calibres with various complications including chronographs. The foundation for the family was born of a movement developed by Lemania for Ebel in 2005 – it was an evolution of the Lemania cal. 1350 and named the Ebel cal. 137.

But with Ebel having sunk its men’s sports watch business within a few years of the movement’s launch, in 2012 the company sold the rights to the calibre to Ulysse Nardin, which now makes most of it in-house. One of the most obvious features shared between all the movements of the family is the “Magic Lever” automatic winding, an efficient and simple bi-directional winding invented by Seiko in 1959 and now used by several Swiss brands from Cartier to Panerai. One half of the “V” shaped “Magic Lever”

The UN-128 sports a look typical of Ulysse Nardin movements: an appealing aesthetic characterised by clean, mechanically applied decoration and an elaborately cast rotor. But because the regulator is on the front, the back is mostly covered by a large bridge. The tourbillon regulator is of the flying variety, without a bridge on the top. It’s small relative to the size of the watch, and constructed in a minimalist manner. While simple, the finish is similar to that of the movement – clean and functional. Notably, the escape wheel, pallet fork and hairspring are silicon, which is an appropriate use of technology since the rest of the movement is obviously contemporary. One of the most interesting watches unveiled at Baselworld 2016, the Ulysse Nardin Grand Deck Marine Tourbillon tells the time with a miniature boom, cables and pulleys, just like a sailboat.