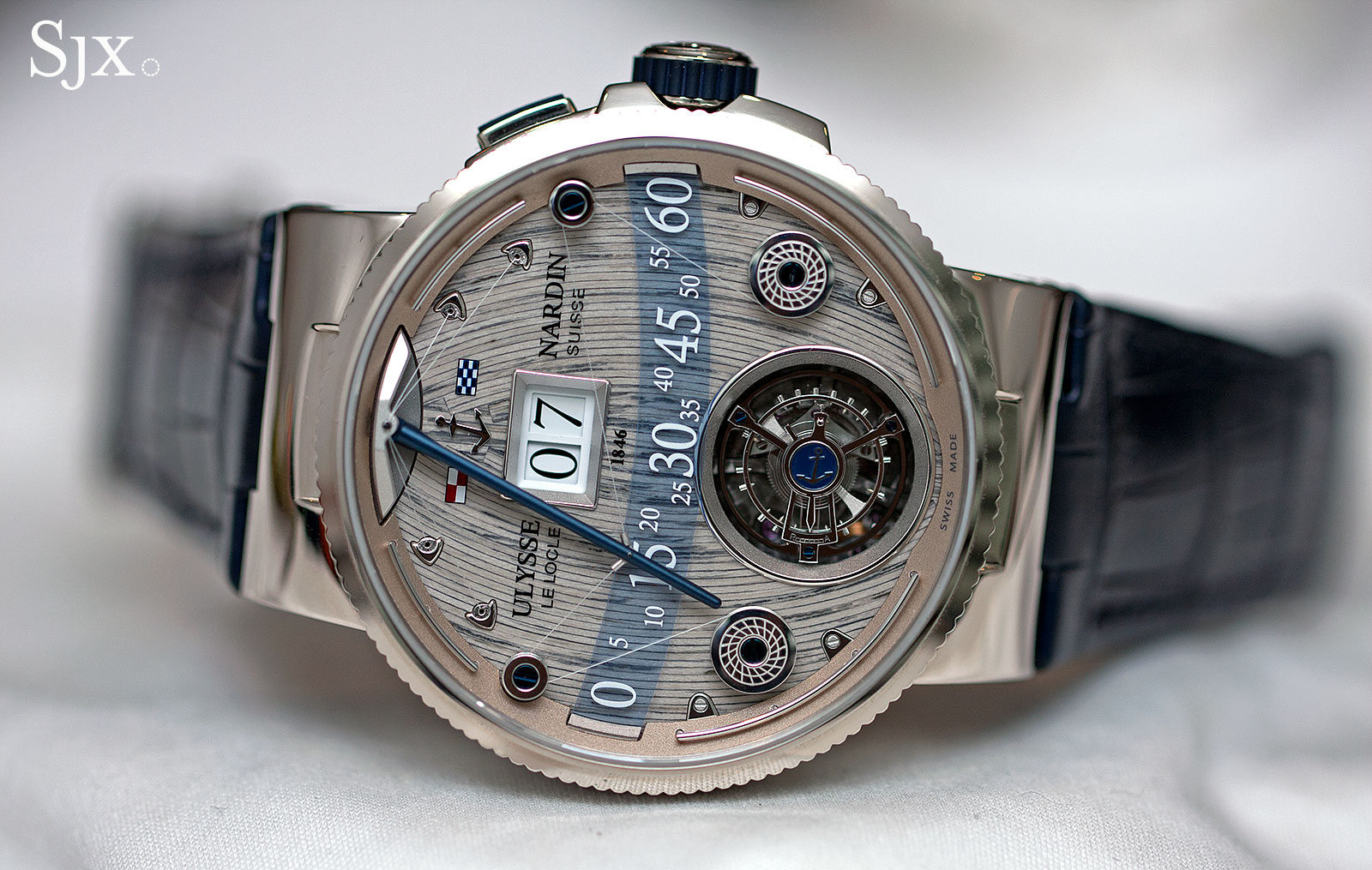 One of the most novel watches introduced at Baselworld 2016 was unexpected. Having been quiet since the passing of its driving force and subsequent sale, Ulysse Nardin surprised with the Grand Deck Marine Tourbillon. Many watches that lean heavily on a particular theme, automotive racing for instance, tend to appropriate elements and clumsily integrate them into the design, like having brake caliper buttons, speedometer dials and wheel rim rotors. Once a famous maker of marine chronometers for various navies around the world, Ulysse Nardin has frequently relied on its maritime history for inspiration, but the Grand Deck Marine Tourbillon takes a more intelligent approach in working the nautical theme into the design as well as the complication.

All hands on deck

White gold and 44 mm in diameter, the Grand Deck Marine Tourbillon has the chunky feel that’s characteristic of contemporary Ulysse Nardin watches. But the time display is wholly novel. The key feature of the Grand Deck Marine Tourbillon is the retrograde minute hand that’s shaped like the boom of a sailboat, pulled along by tiny ropes and pulleys. And just like a real boom, the horizontal pole attached to the mast along the base of a sail, the retrograde hand is made of lightweight aluminium.

The miniature boom travels from left to right indicating the minutes on a track made of translucent blue spinel (a type of mineral crystal). Once it hits the 60-minute mark, the boom swings back to zero in a smooth motion that takes about four seconds. Freely pivoted at 12 o’clock, the minute hand is controlled by two tiny cables connected to both of its side, with each just 0.0357 mm in diameter – less than half the width of a human hair. Made of Dyneema fibre, the trade name for ultra-high molecular weight polyethylene, these tiny cables are up to 15 times stronger than steel and able to withstand traction of 1.4 kg without stretching, explaining why same Dyneema fibres are used in body armour and high performance sails. Each cable is anchored to a pulleys, at four and eight o’clock respectively, that are in turn driven by below the dial. The hours are jumping, changing at the top of each hour when the boom hits “60”. They are shown with twin discs inside a window in the centre of the dial. Because setting the minute take is a slow process given its motion, a pusher in the case at two o’clock allows for rapid advancement of the hours. To complete the nautical theme, the dial is made of wood marquetry, with tiny strips of wood inlaid to resemble the teak deck of a ship. The curvature of the inlaid strips evoke a photograph shot through a fisheye lens, giving the dial a panoramic feel. And on the sloped flange of the dial – the ring in between the dial and sapphire crystal – sit tiny rails just like those of a boat. Powering the complicated display requires a movement with two barrels, one to keep the time and the other to power the time display, namely the retrograde boom and the jumping hours. This ensures that the sudden rise in energy needed to advance the time at the top of the hour (to advance the hour discs and return the minute boom to zero) does not cause a detrimental lose of energy in the timekeeping portion of the movement. Winding the watch winds both barrels simultaneously, and at full wind the power reserve is 48 hours. Both barrels are open, meaning the mainsprings can be seen inside. The bridges of the movement are also open-worked, revealing the gears that drive the pulleys located on the lower half of the movement. And at the six o’clock position is a governor, similar to the device that regulates the speed of the minute repeater, except here it’s tasked with regulating the speed of the boom returning to zero. The least interest aspect of the movement is the tourbillon, of the conventional one-minute flying type, though this is what reveals the maker of the movement. Though tourbillons are now common to be point of being uninteresting, the inclusion of a tourbillon is reassuring, especially in an expensive watch with an esoteric complication like this one.

The details of the tourbillon reveal the origin of the movement, particularly the v-shaped lower cage as well as the “A” and “R” markings on the regulator index. Short for avance and retard, or “faster” and “slower”, these were commonly found on old pocket watches, the sort of movements that inspired the construction of the tourbillon. If you haven’t guessed it by now, the movement was constructed by Christophe Claret. Although Ulysse Nardin is a respected watchmaker in its own right, its history is intertwined with that of Claret. When Claret first struck out on his own as a watchmaker, his first client was Ulysse Nardin when it commissioned a series of minute repeaters with jacquemart (small automatons that strike bells) in 1986. This allowed Claret to set up his eponymous firm that now specialises in making complicated movements for other brands.

The Grand Deck Marine Tourbillon is available only in white gold (for now; other versions are likely). It’s limited to 18 pieces with a retail price of SFr280,000, equivalent to US$291,000.