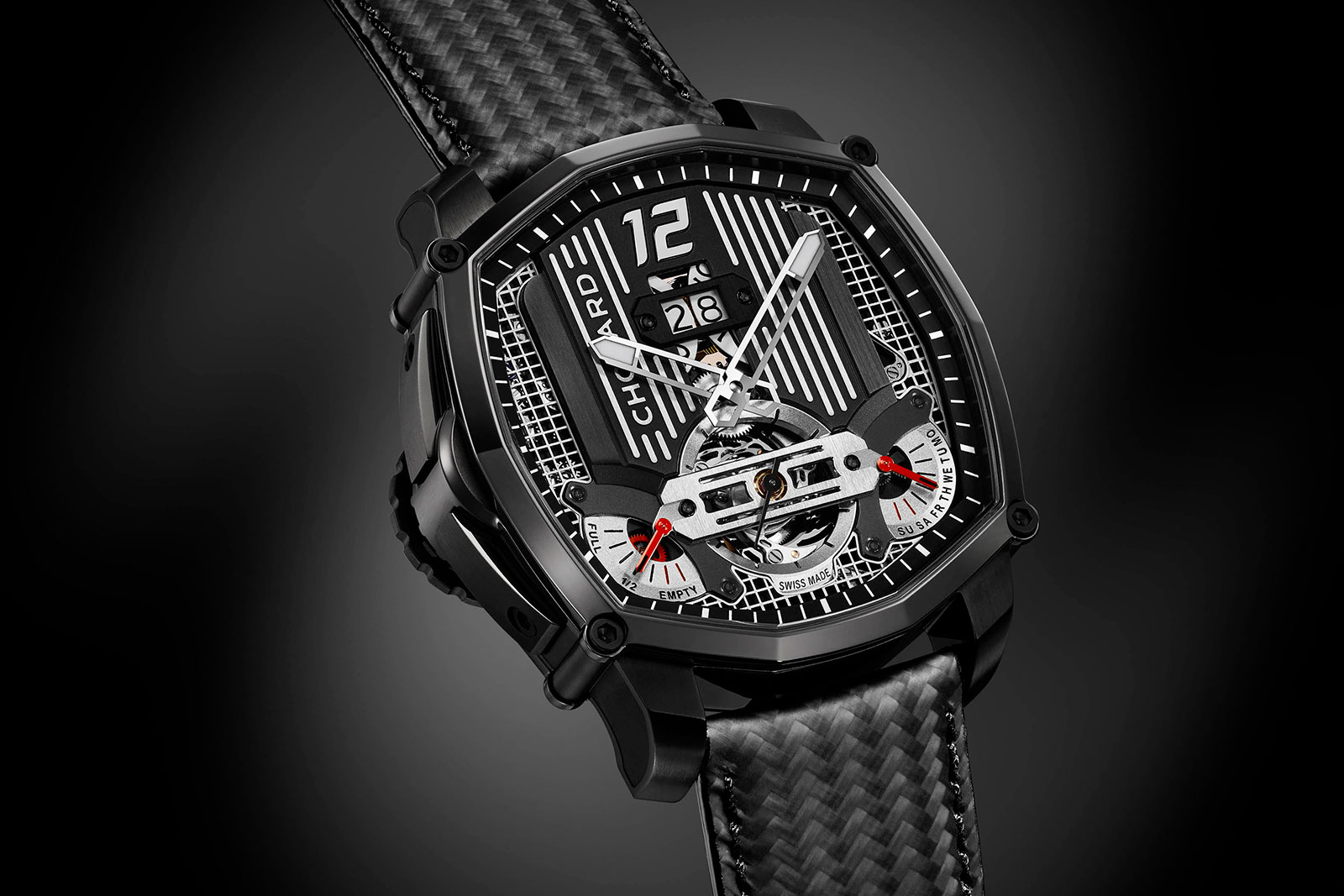 Chopard recently unveiled the latest iteration of its Mille Miglia chronograph, a long-established model with conventional looks lightly inspired by classic cars. But it also unveiled the Mille Miglia Lab One Tourbillion, which is also automobile-inspired but instead by modern-day, hybrid hypercars.

Drastically different and unabashedly contemporary, the Lab One is large, lightweight, and boasts a technically-impressive form movement with two notable features, a vertical hacking mechanism for the tourbillon as well as a back-winder crown.

While Chopard’s catalogue includes numerous classical, complicated watches that are well done – basically the entire L.U.C line – few of them possess strong design and rarely jump out at you. The Lab One is the opposite: unusual and original, and appealing – but polarising in terms of design. 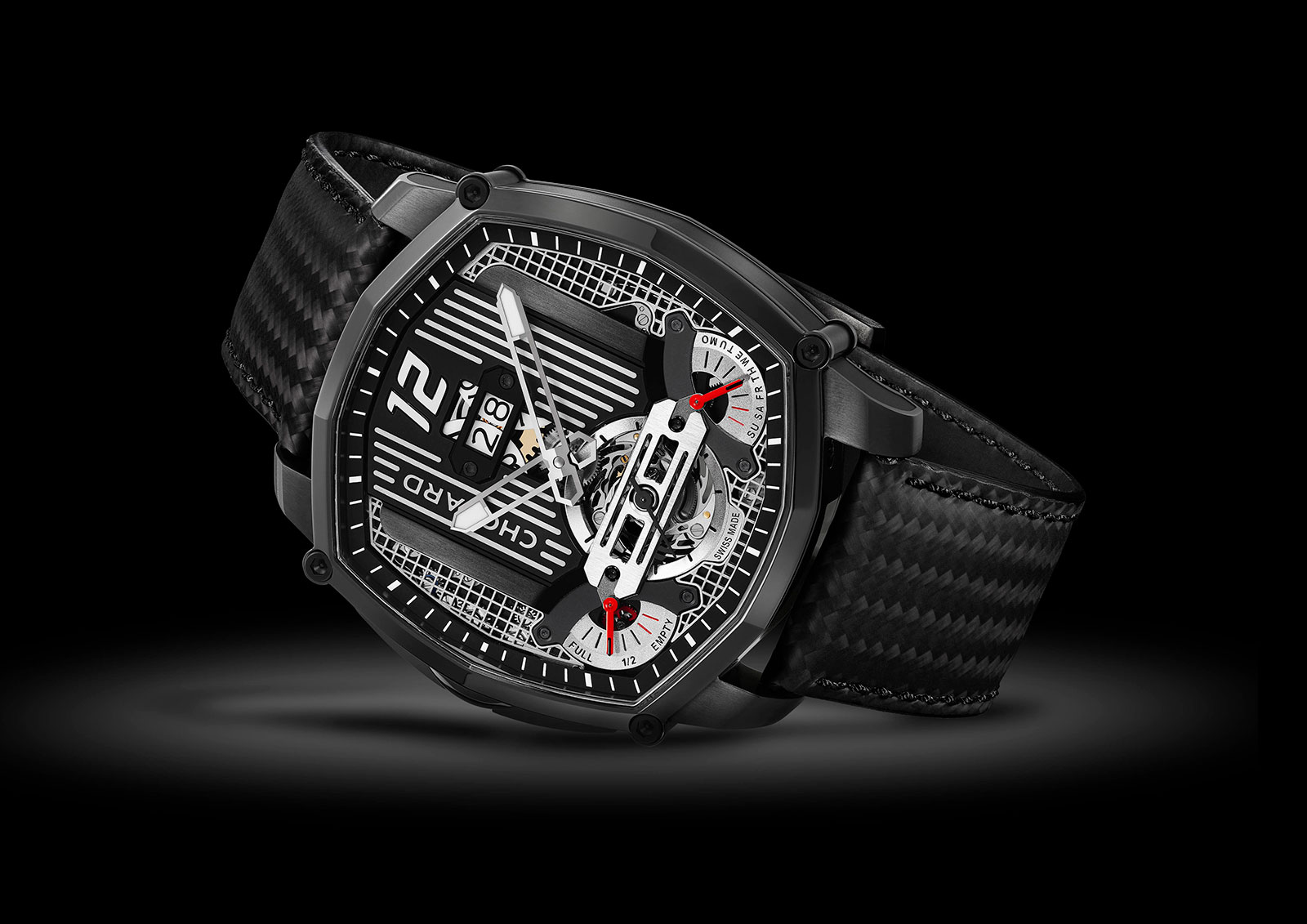 This not Chopard’s first foray in high-end, complicated sports watches, though it has not had much success in a segment dominated by brands like Richard Mille and Hublot. While its peers have refined their aesthetic into a recognisable style, Chopard is not well versed at such design. The watch is replete with car-inspired elements, but incorporated with varying degrees of coherence. 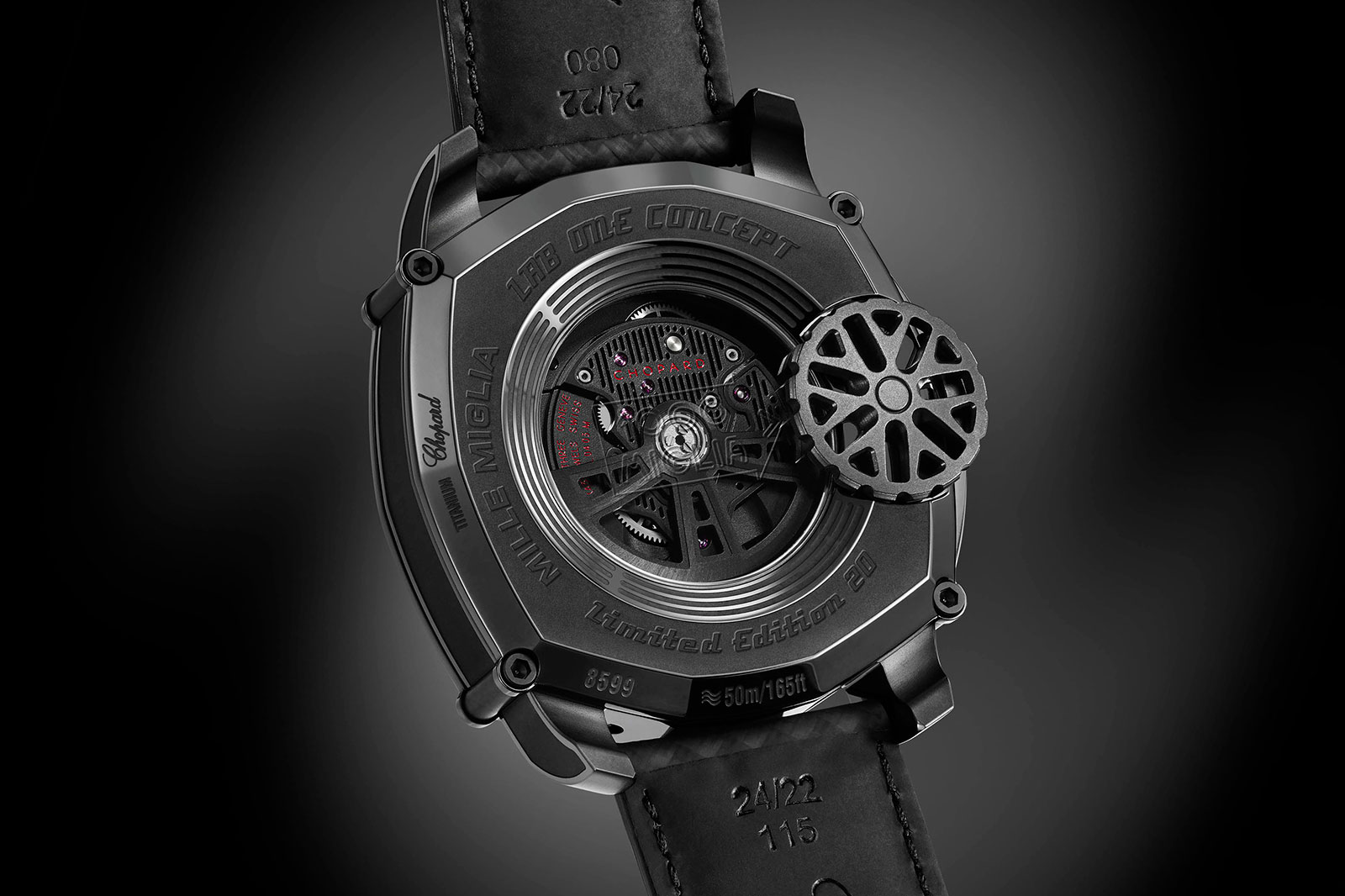 It does, however, excel at watchmaking. Compared with the competition, the Lab One wins hands down in terms of technical achievement relative to price. Impressively kitted out with a hacking tourbillion, the Lab One is priced at $129,000, which is a lot of money, but not so much as such things go. 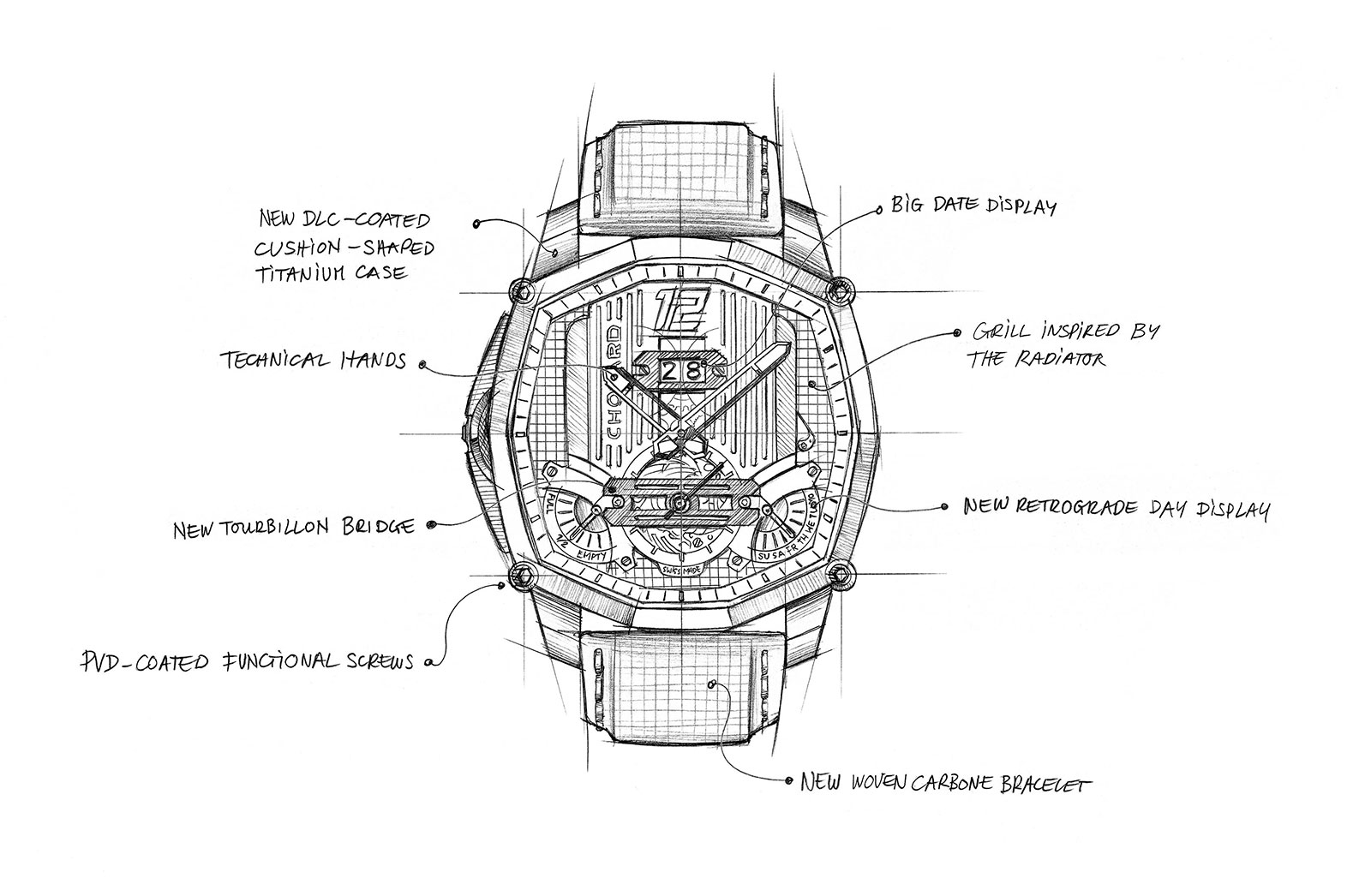 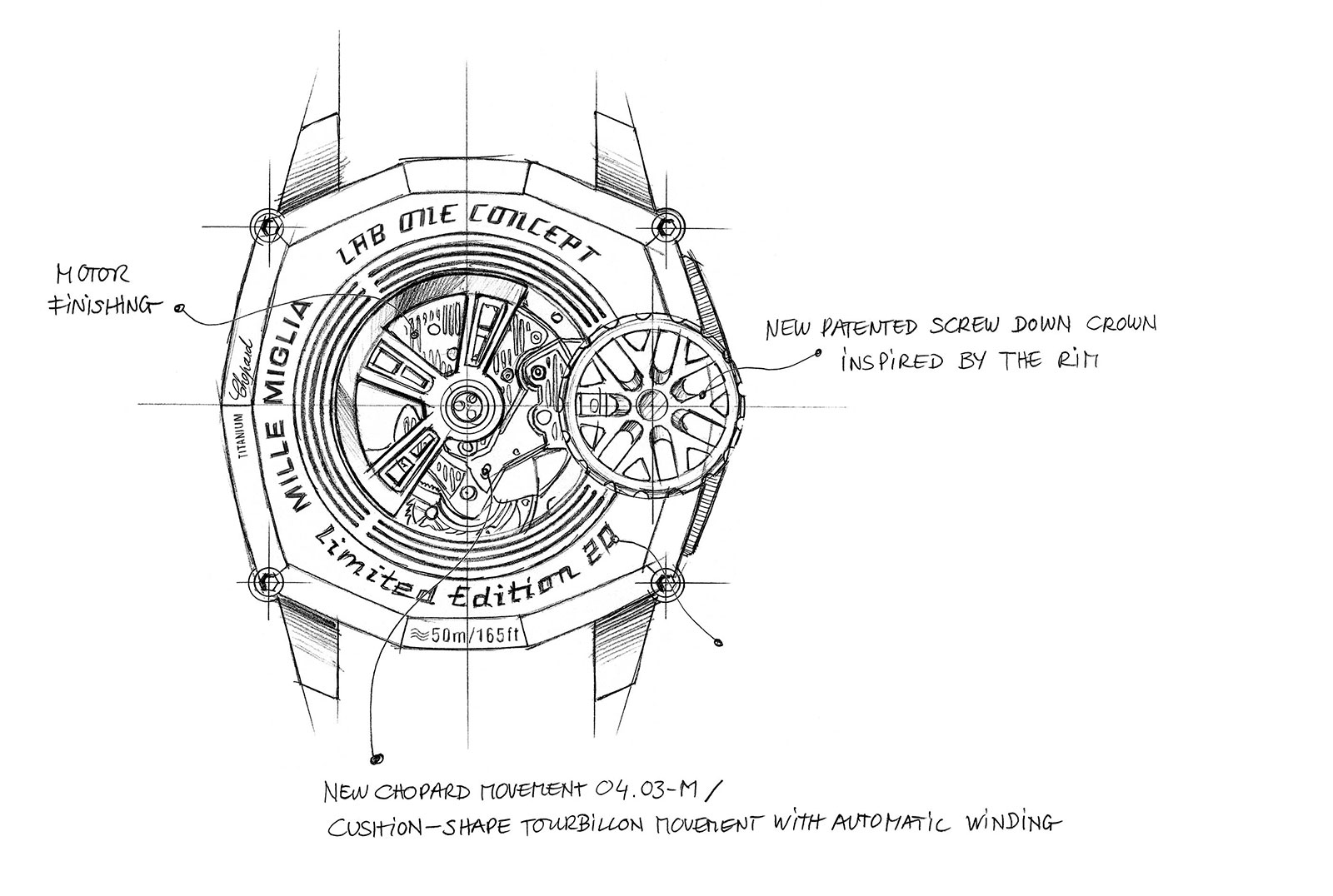 While the view through the display back suggests the movement inside is round, the cal. 04.03-M within is actually a form movement of a wide-barrel shape that echoes the case shape. Featuring a 60-hour power reserve, it’s automatic and equipped with Chopard’s patented Variner (short for “variable inertia”) balance within the tourbillon carriage. 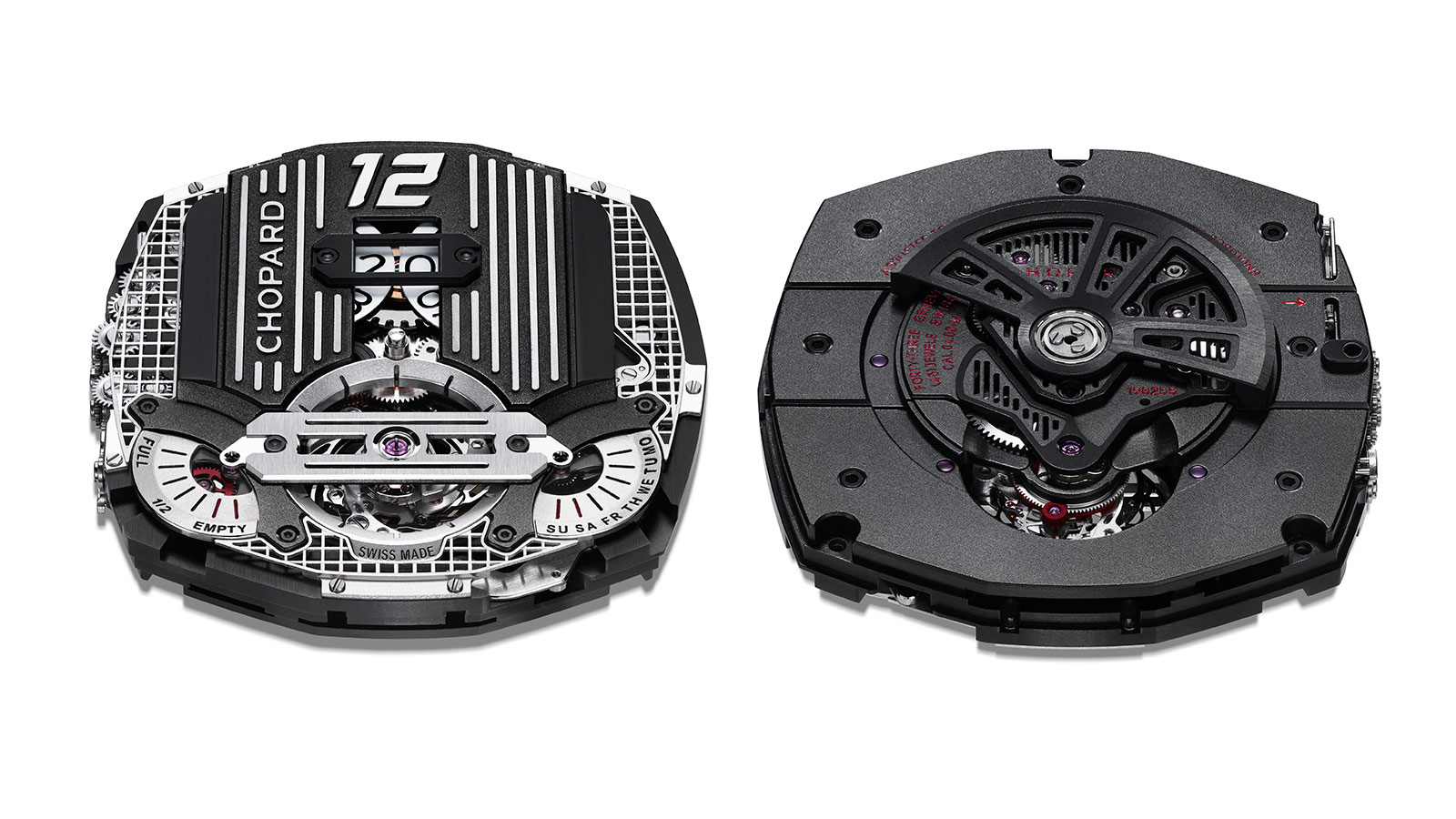 Supercar-inspired bits are scattered throughout the watch. Shaped like a wheel rim, the oversized crown is a back winder: positioned on the case back instead of the usual three o’clock, and sitting perpendicular to the movement.

The reason for the unusual crown is due to the intriguing movement construction. Instead of engaging with the tourbillon laterally as is conventional – typically a lever swinging inwards to touch the cage or balance wheel – the hacking mechanism operates vertically, clamping onto the driving wheel, much like the callipers of a disc brake. 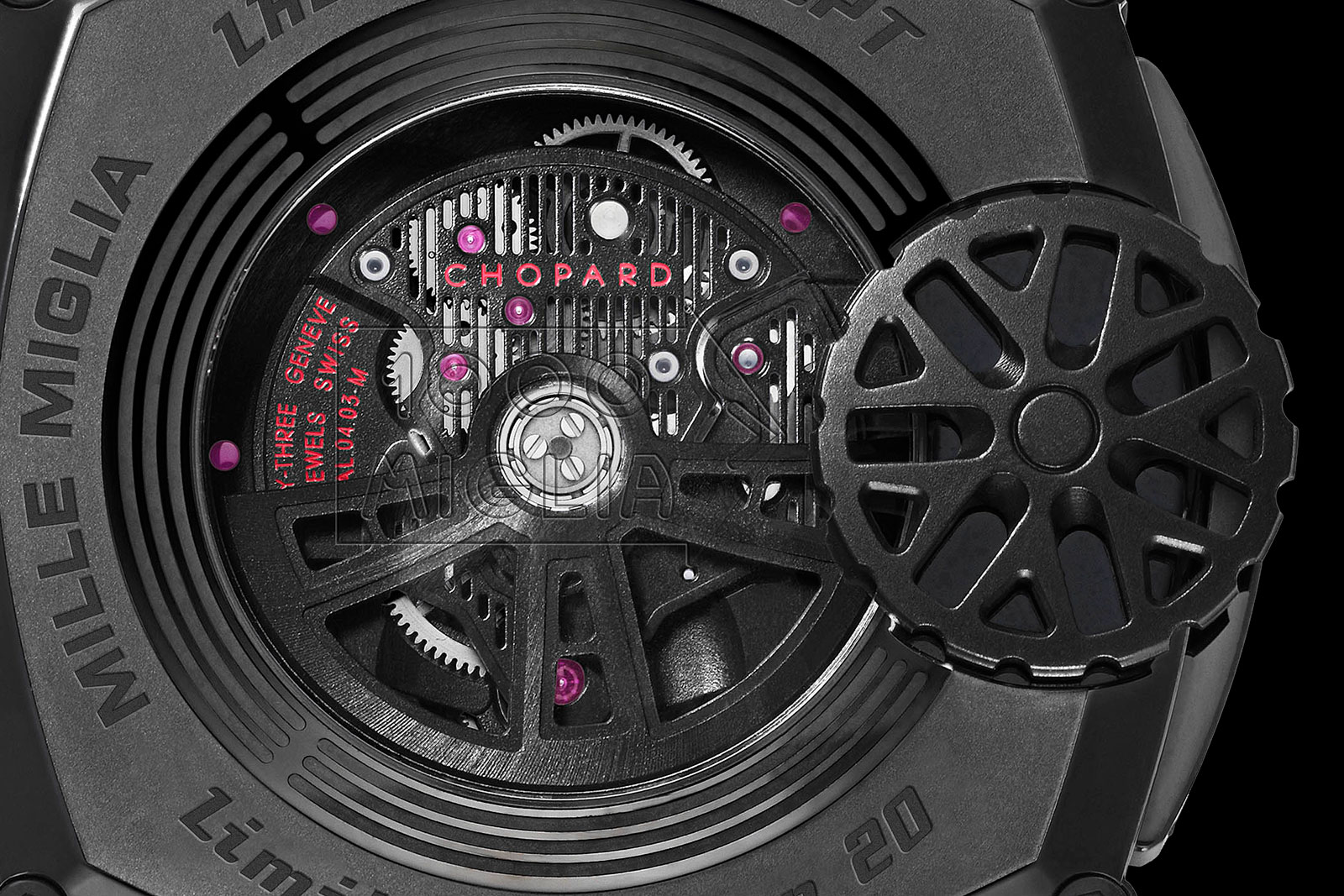 Continuing the automotive styling, most of the bridges on the back are open worked with a vent-like pattern. And on the dial are the power reserve and retrograde day indicators, both on fan-shaped scales resembling dashboard instruments. Looking like an engine block, the dial also has a practical feature. An oversized, double-digit date display at twelve. 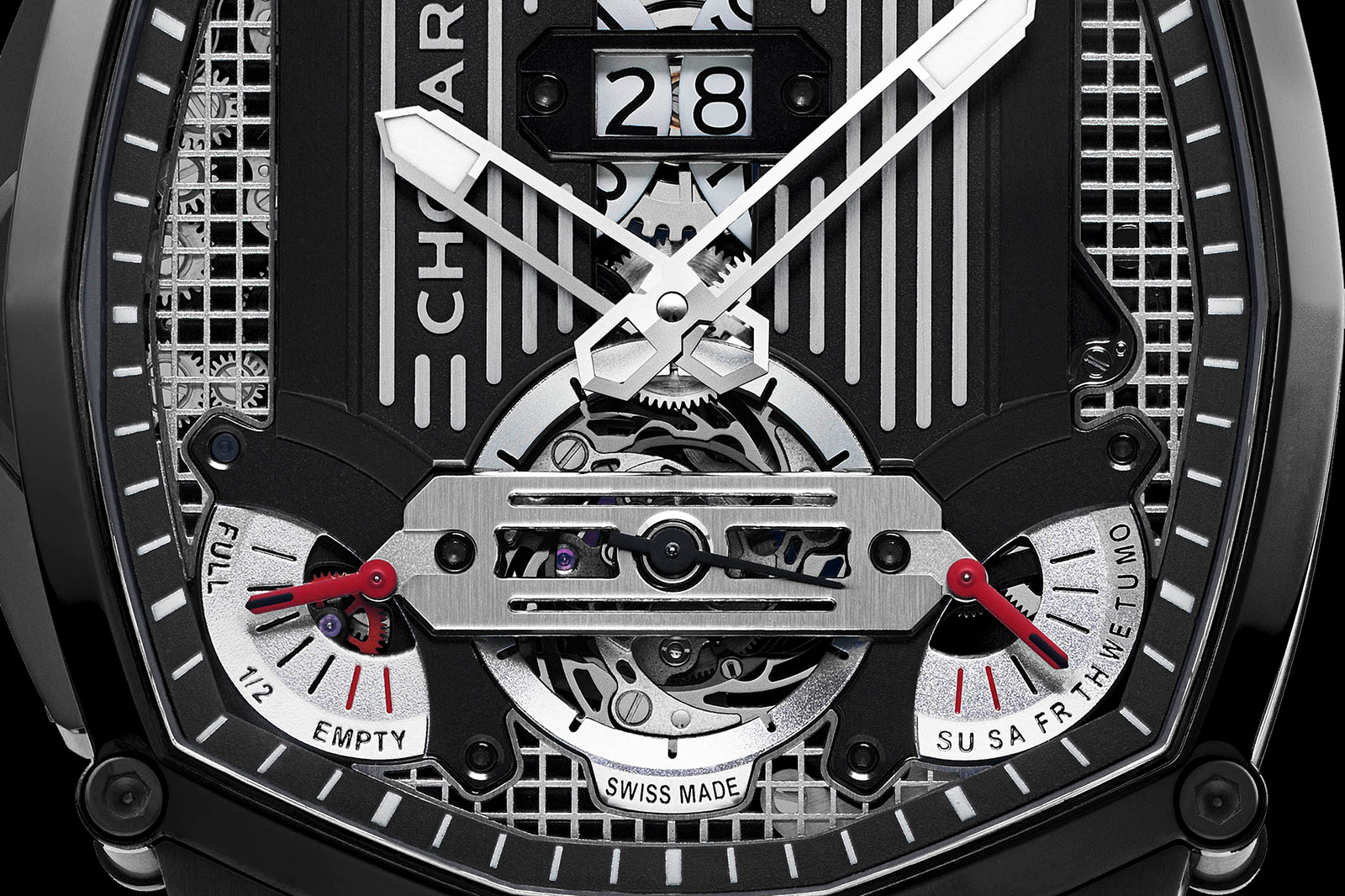 A pared-back take on the classic-car chronograph.