Urwerk founders Felix Baumgartner and Martin Frei visited Singapore in September 2019 and we had lunch with at the Marriott along Singapore’s Orchard Road, sitting outdoors to enjoy Singapore’s uniquely tropical weather.

Thanks to an inspiring afternoon with the pair, it was just after that lunch that I first mooted the idea of a UR-100 with a cover over the front. I sent over this awful mock-up I created on Photoshop, which was clearly inspired by the UR-103, an old favourite of mine.

After a back and forth with Felix and Martin, and a few long pauses in between, an idea took shape. In June 2020, I further refined the idea in an email to the pair, “I have an idea of a watch inspired by the ancient Mayan astronaut myth… something like an UR-100, but with metal covering more of the face… with an engraved Mayan pattern…”. 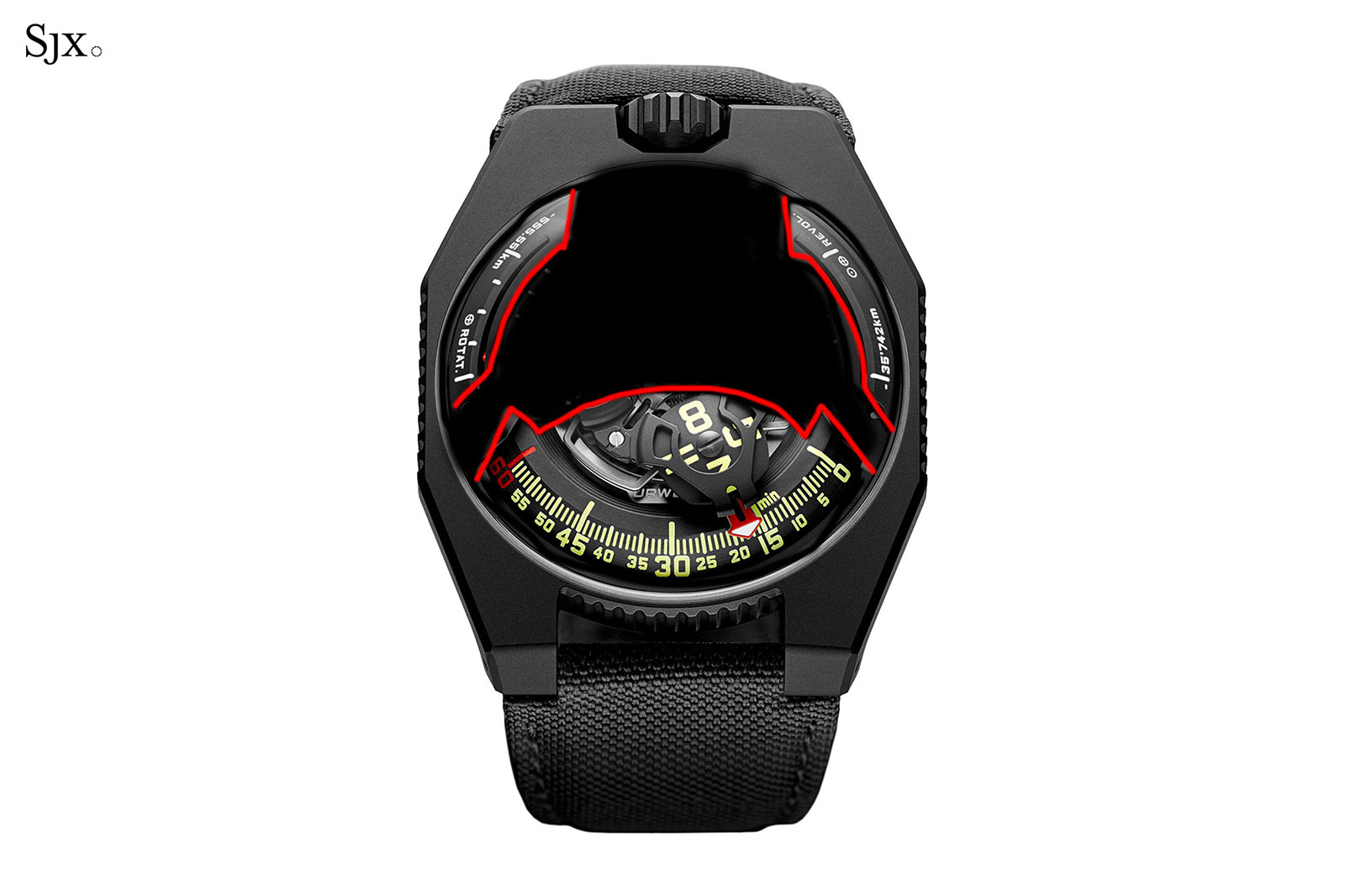 A serious watch with a sense of humour is something that appeals to me, so the rationale for the concept was tongue in cheek: Urwerk makes sci-fi watches, so a Mayan motif was perfect since it was once believed the first person in space was a Mayan astronaut.

The myth arose from a misinterpretation of the motif on a Mayan ruler’s sarcophagus (you can find out more about supposed ancient astronaut by reading up on “Kʼinich Janaabʼ Pakal“).

Not long after, I elaborated on the idea and suggested a yellow gold case with an emerald cabochon in the crown. Unfortunately that was not to be (although some green did make it way into the watch).

But being the geniuses that they are, Felix and Martin realised the idea more impressively than I could have ever imagined. 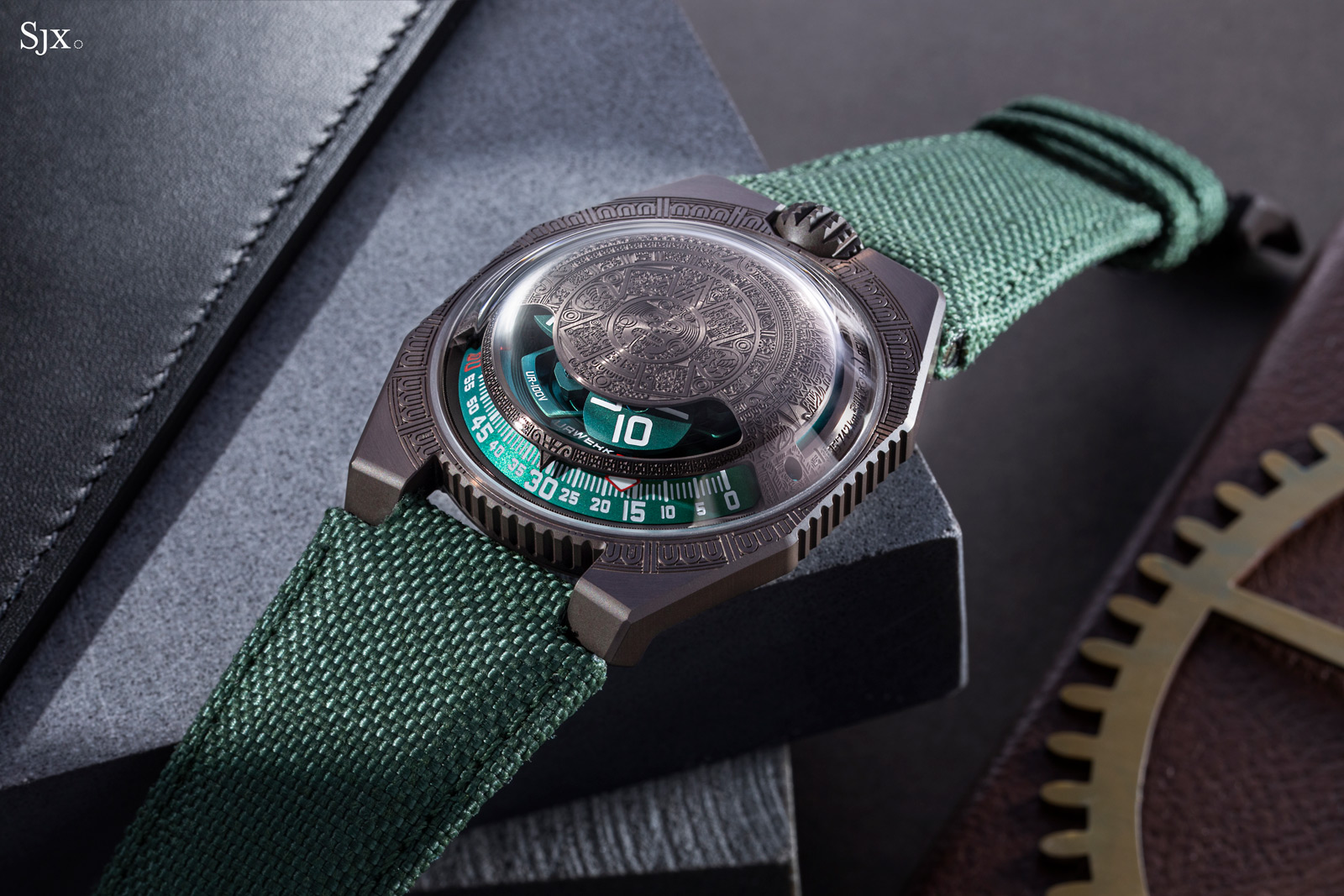 When I finally – and it was a long wait – travelled to Geneva in late 2021 I finally got to see the prototype. I was blown away by what Felix and Martin had created.

Entirely in coated steel with a titanium back, the UR-100V ‘Time and Culture’ has an engraved cover under the sapphire crystal, creating a fascinating visual effect. 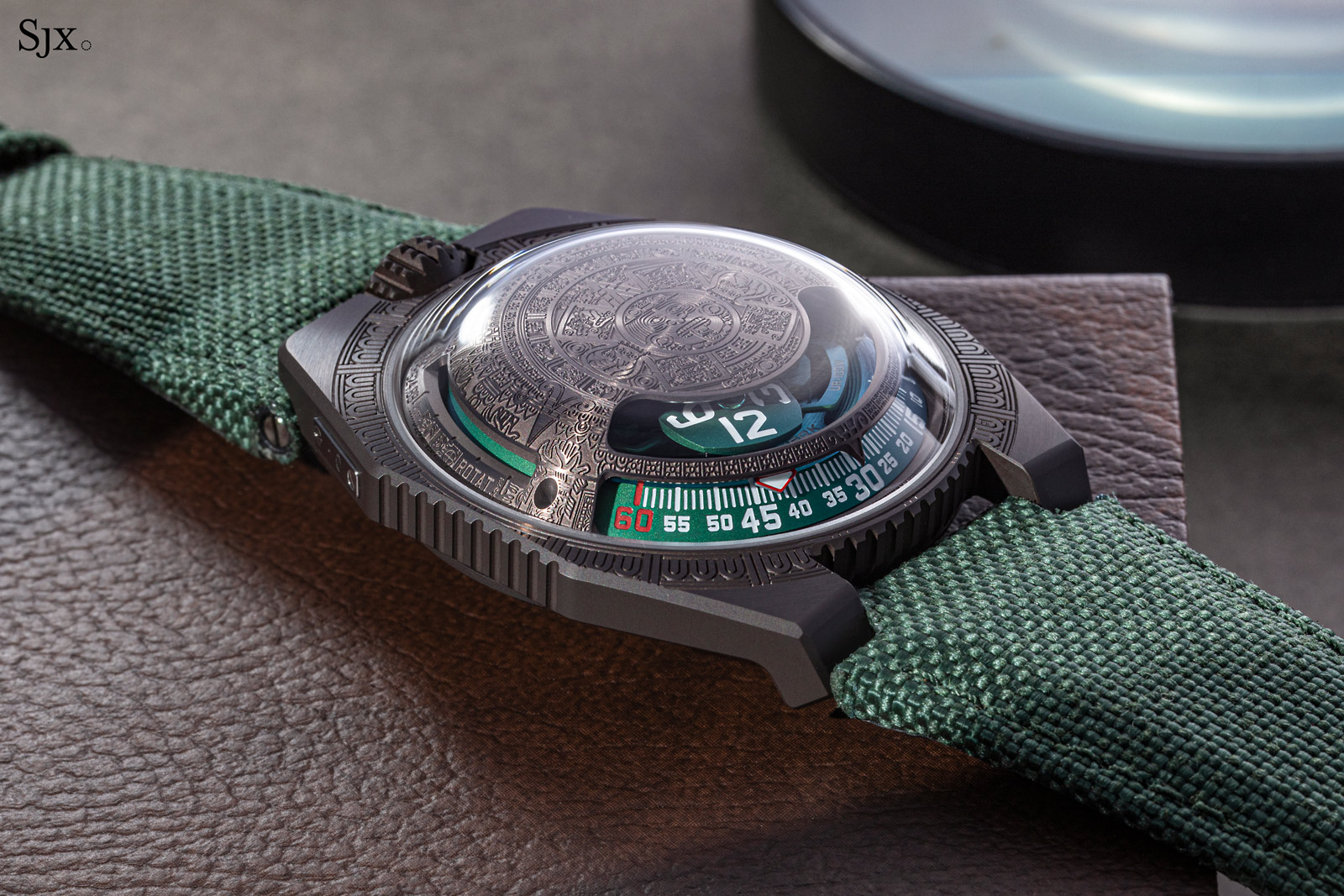 The cover is engraved with an Aztec motif taken from the Sun Stone, perhaps the most famous example of Aztec culture. Over 3.6 m wide and weighing over 24 tonnes, the 16th century stone is now on display in the National Anthropology Museum in Mexico City. 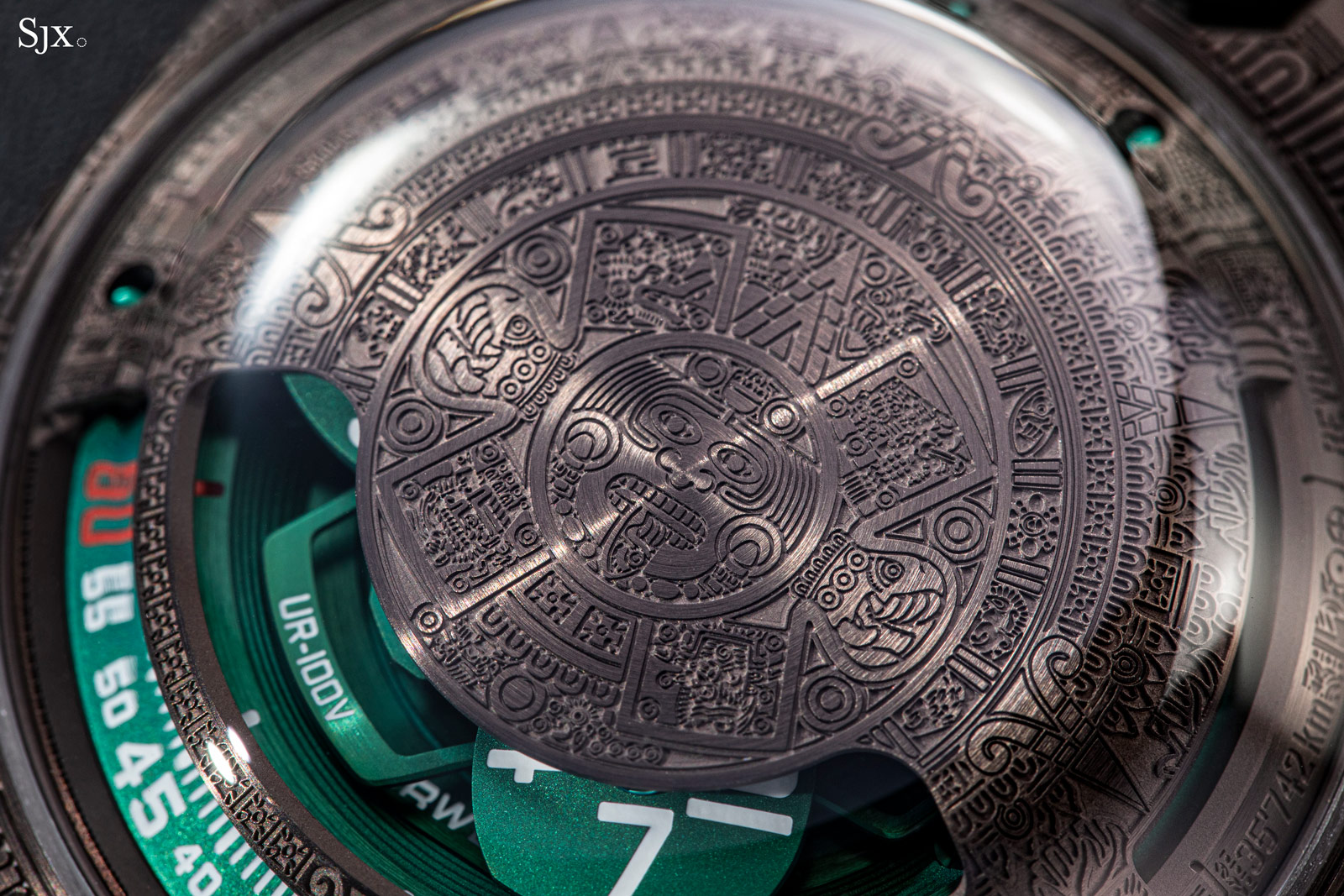 The engraving was done with a drill bit of just 0.05 mm in diameter – the incredible fineness of the tip meant that the breakage rate for the tool is extremely high, adding a further level of complexity to the production process.

The result is an engraving so tiny a loupe is required to see it in detail. The relief sections of the engraving are brushed, while the recesses are frosted, creating a subtle contrast that is obvious up close.

And I am grateful to Felix and Martin for incorporating my initials into the engraving as a “secret signature” that practically invisible to the naked eye. 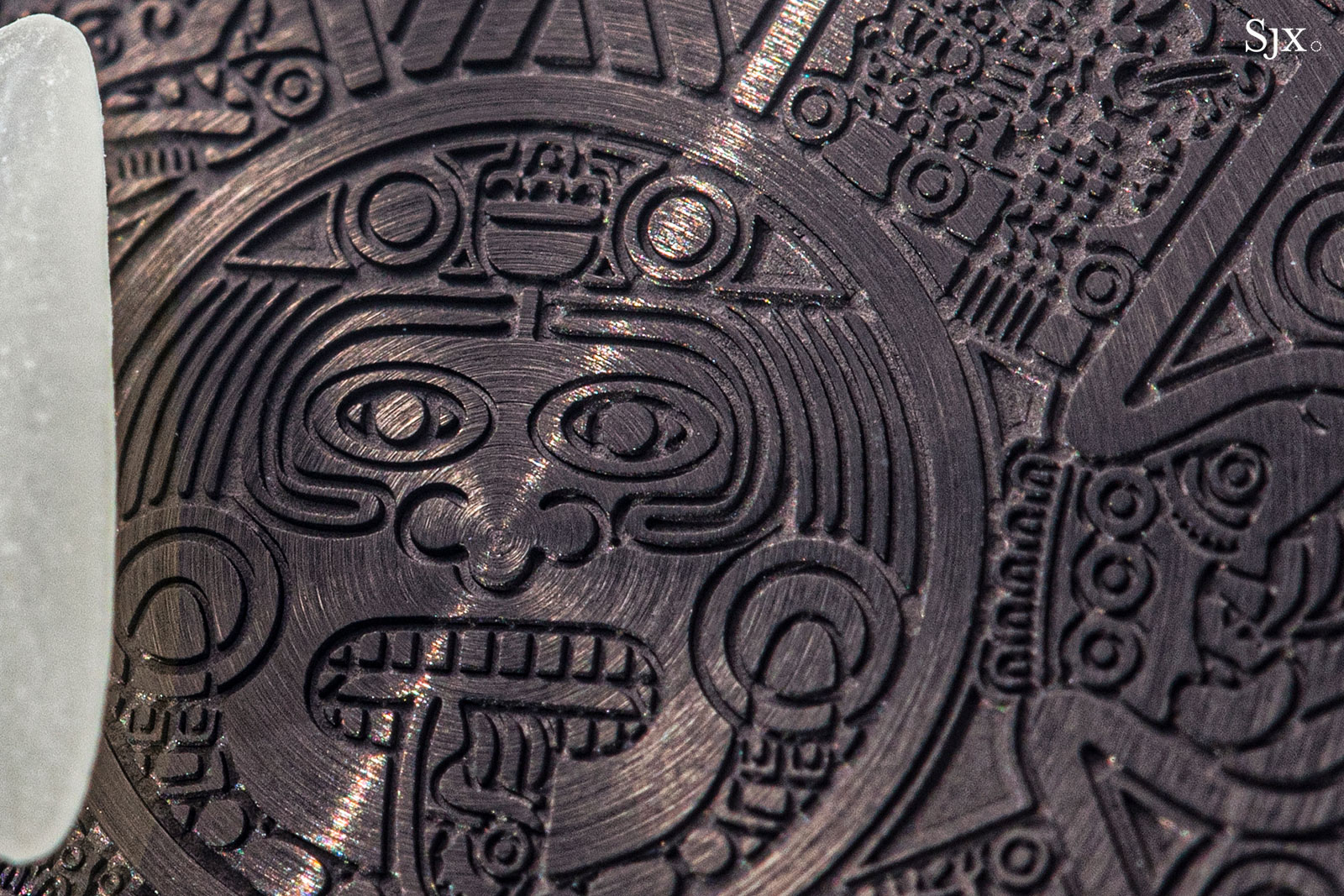 The mechanics of the time

The rest of the watch is very much the UR-100V, with same dimensions and functions. The cover and case are both steel that’s been finished with copper-bronze coating, while the case back is titanium.

Time is indicated by the familiar satellite discs that form a wandering display – hours on the discs and minutes on a track on the periphery of the dial. 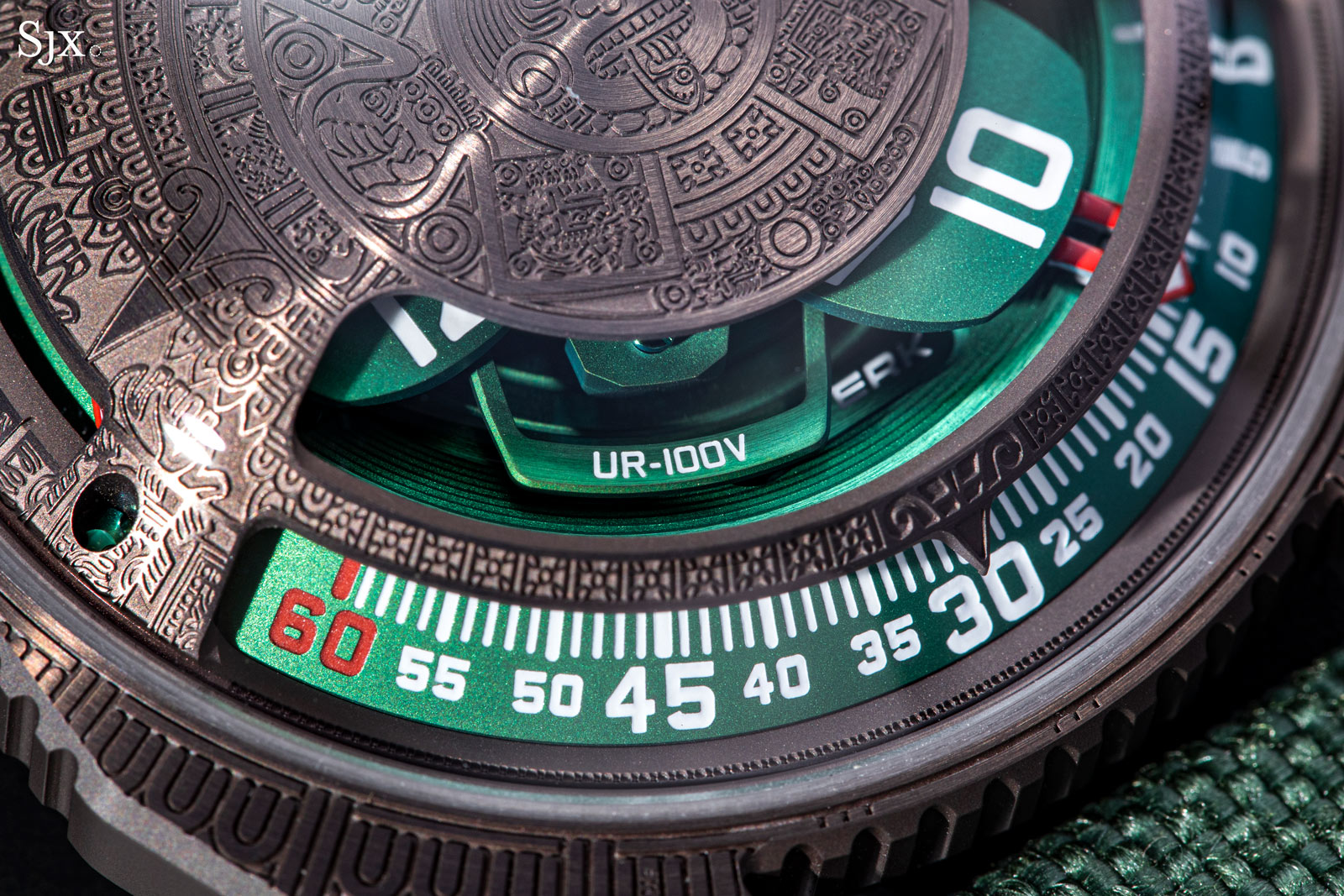 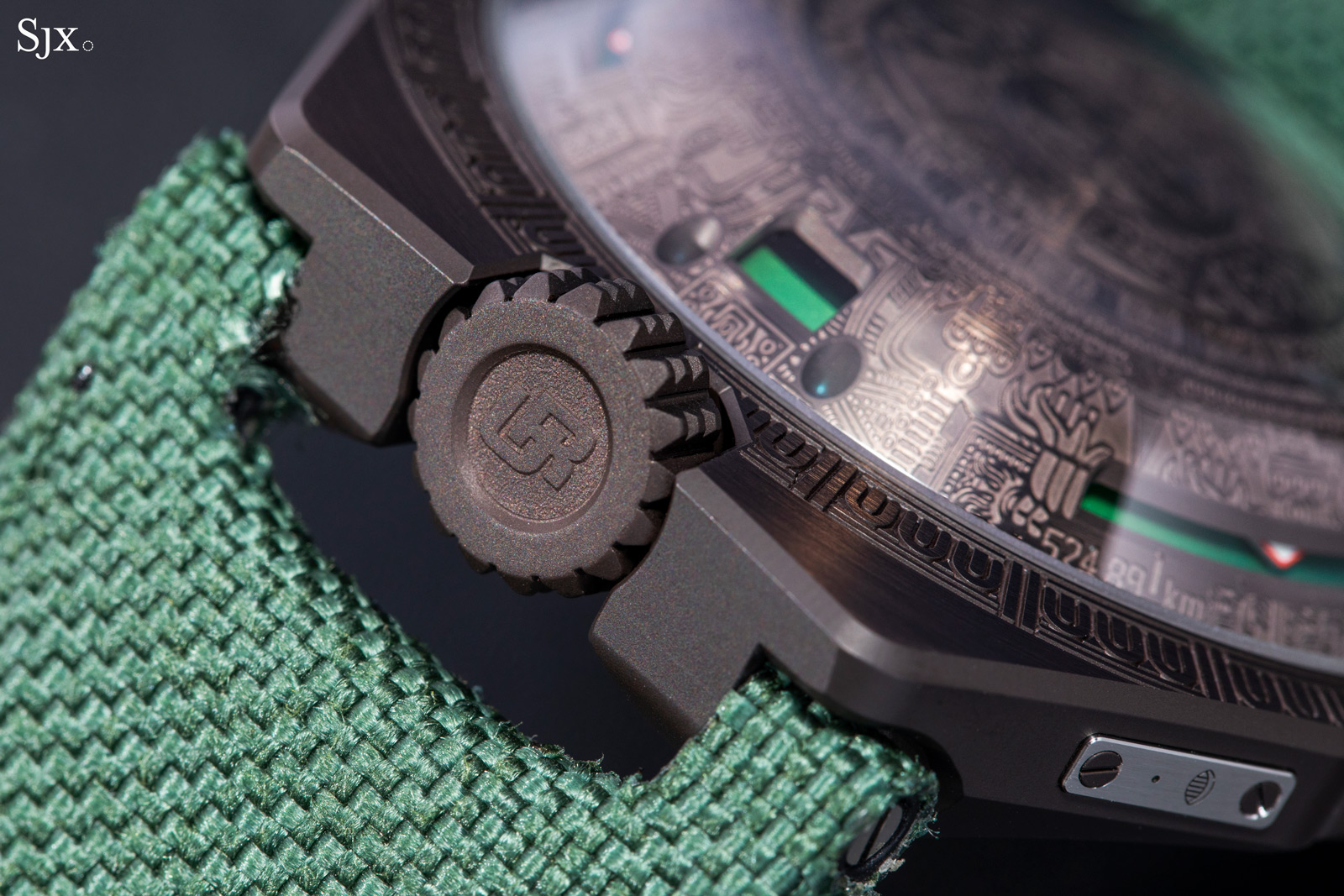 And two apertures on the edge of the front cover contain the two astronomical indicators that are a signature of the UR-100. The indicators are not mechanical functions, but instead scales that rely on the revolution of the satellite discs to measure astronomical distances travelled over 20 minutes.

The first indicator sits at 10 o’clock and shows the Earth’s rotation on its own axis as measured at the equator, that’s about 555 km every 20 minutes. And opposite this is the indicator that shows the Earth’s orbit around the Sun, 35,740 km in the same period of time. 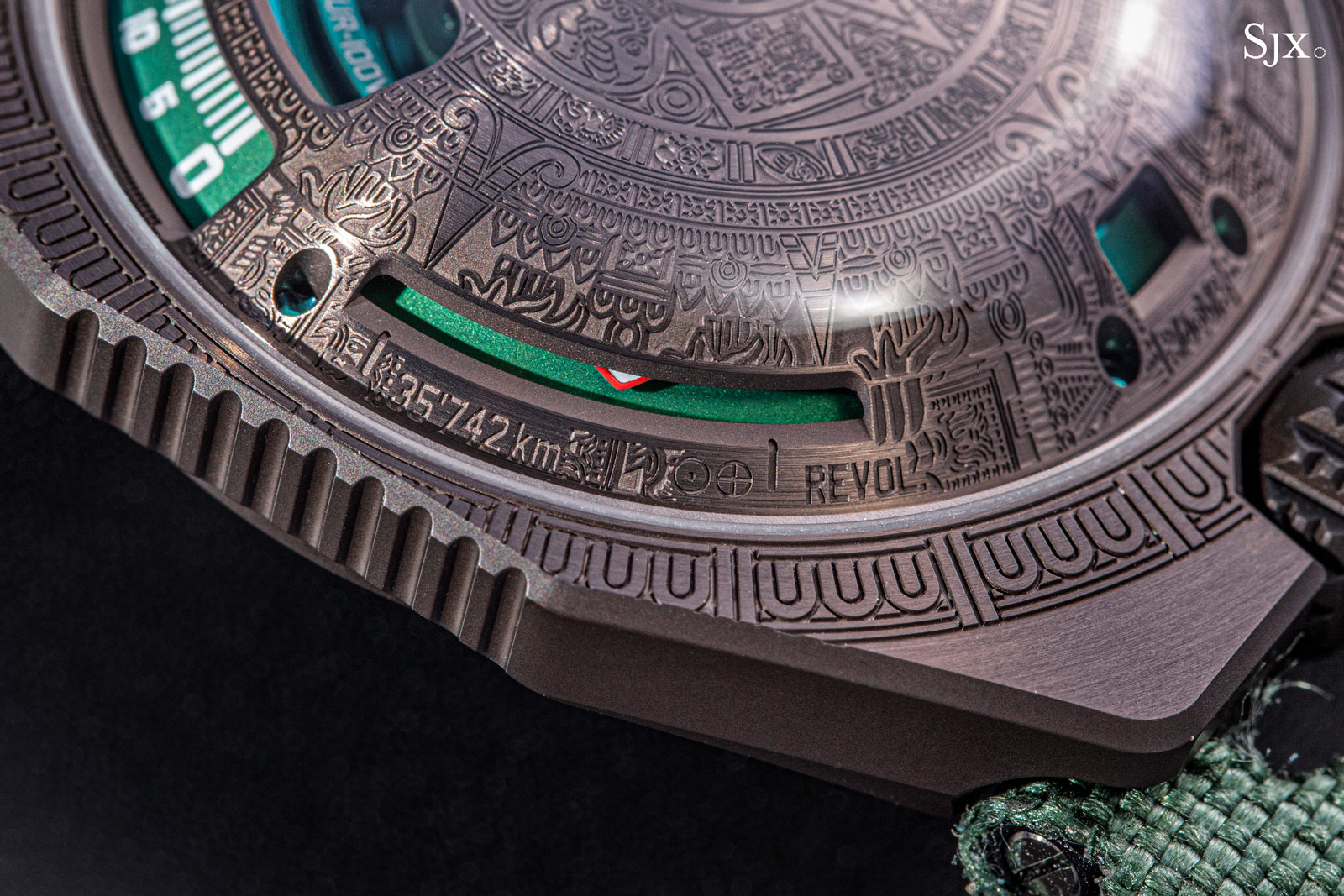 As in the standard UR-100, the base movement is an automatic Zenith Elite that’s fitted with the satellite disc module on the top, while on the back the winding mechanism has been modified to transform it into a “planetary turbine automatic system”, which Urwerk also refers to as the “Winfänger system”.

It’s basically a large wheel fixed to smaller gear underneath that meshes with a large toothed ring on the perimeter of the movement. It serves as a damper for the winding motion, preventing the rotor from winding too rapidly or too much. The UR-100V “Time and Culture I” is a limited edition of 20. We have a handful available, with the rest being available at Urwerk retailers. Another of the intriguing details that Martin designed into the watch 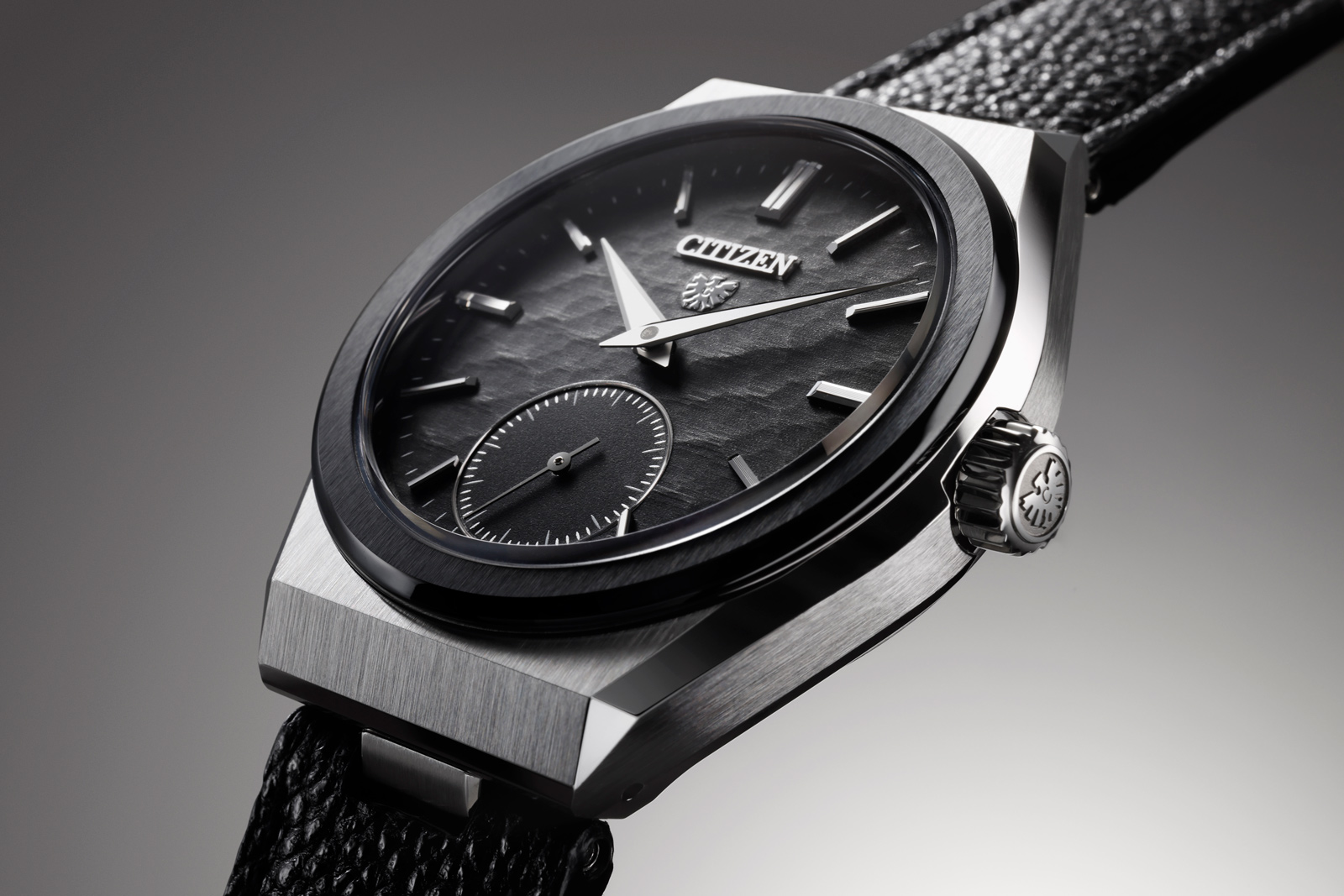 A year ago, Citizen debuted its first all new, high-end mechanical watch in decades, The Citizen Caliber 0200. A wristwatch par excellence, the Caliber 0200 was so good that it was one of our tops watches of 2021.

Now Citizen is following up with the Caliber 0200 “Japanese Armour”, the first limited edition of the model that’s available globally. Topped with a black ceramic bezel and textured dial, the samurai-inspired Caliber 0200 has a low-key aesthetic that still distinguishes it from the all-steel models. Even though production hasn’t yet caught up with demand – there’s still a waiting list for the watch – the Caliber 0200 is still a niche product, just because it is a high-end, mechanical offering from a brand better known for its solar-powered or quartz watches, and mostly affordable ones at that.

So a limited edition makes sense, since the small run will boost desirability and create buzz worldwide (Citizen did launch a 50-piece limited edition last year that was sold only in Japan). 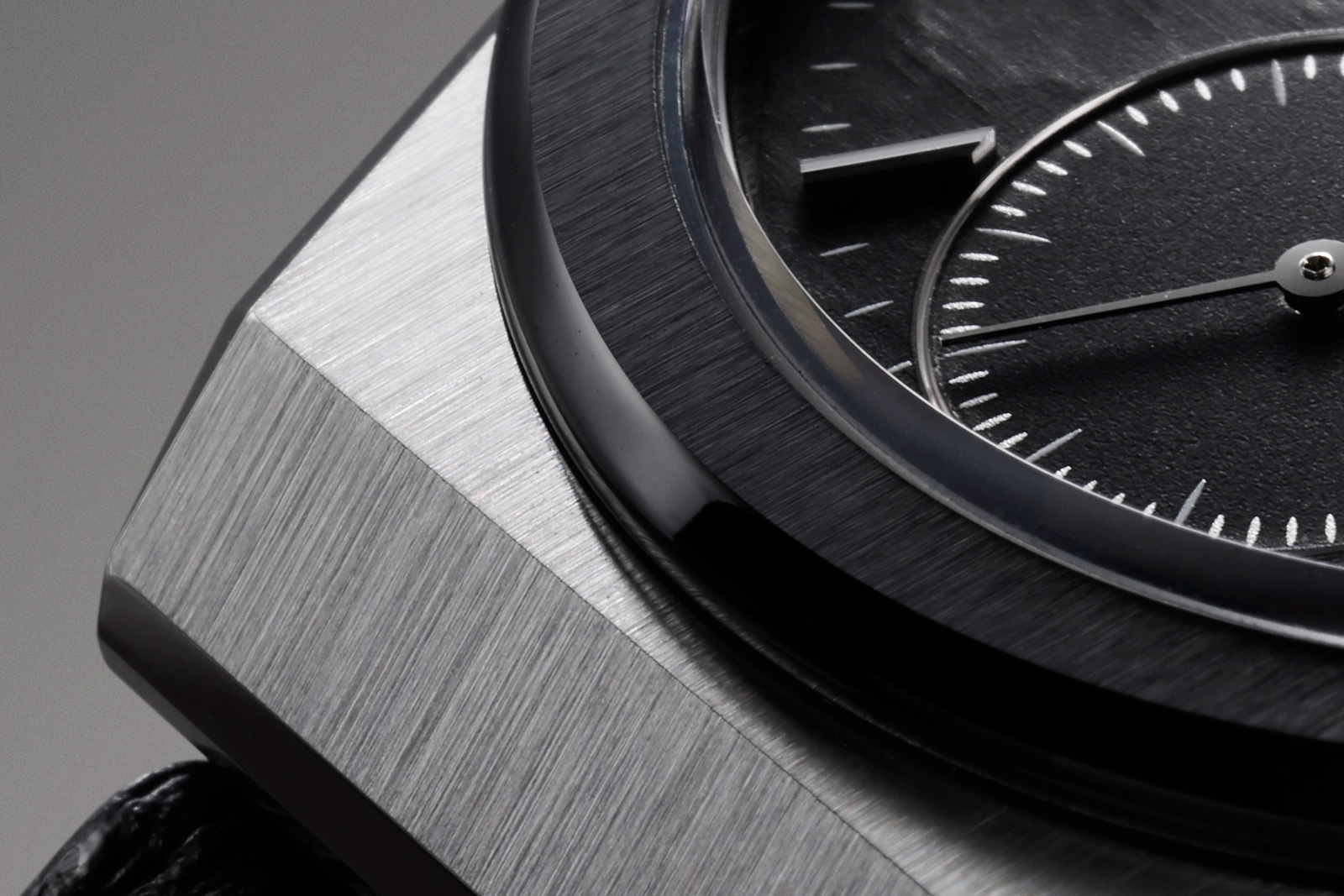 That said, the new edition is still very much a restrained design that’s almost monochromatic. It’ll be one of those watches that are recognised only by those in the know.

Interestingly, both the new limited edition and the standard model stick to the same palette – grey, silver, and black – with the difference between the two being the quantity and intensity of each colour. On the limited edition, black becomes the dominant colour thanks to the ceramic bezel as well as the pebbled strap.

The highlight of the Caliber 0200 is the case and movement finish, which was uniform across all models. As a result, the key feature of the “Japanese Armor” is the dial, which gets a new texture.

Unlike typical textured dials that are fabricated via stamping, the dial of the Caliber 0200 is produced with a slightly more high-tech manner – metal deposition via an electrochemical process. This builds up the layers one by one, resulting in extra precision and complexity. As a result, the dial of the “Japanese Armor” is actually comprised of three different textures. The most obvious are honeycomb-like forms, which are in turn made up of tiny dimples arranged horizontally. The pattern brings to mind the dial of Grand Seiko SLGA007 “Minamo” (and its siblings with similar dials), although those are stamped in a traditional manner.

Meanwhile, the small seconds register does away with the conventional concentric patterning and instead has a simple, grained texture that suits the overall minimalist feel.

To go with the masculine dial, the bezel is black ceramic finished with a brushed top and polished flank. And the metal bracelet has also been eliminated and replaced by a strap made of leather from Himeji Kurozan, a Japanese tannery that specialises in lacquered cowhide that’s more resilient that standard leather. 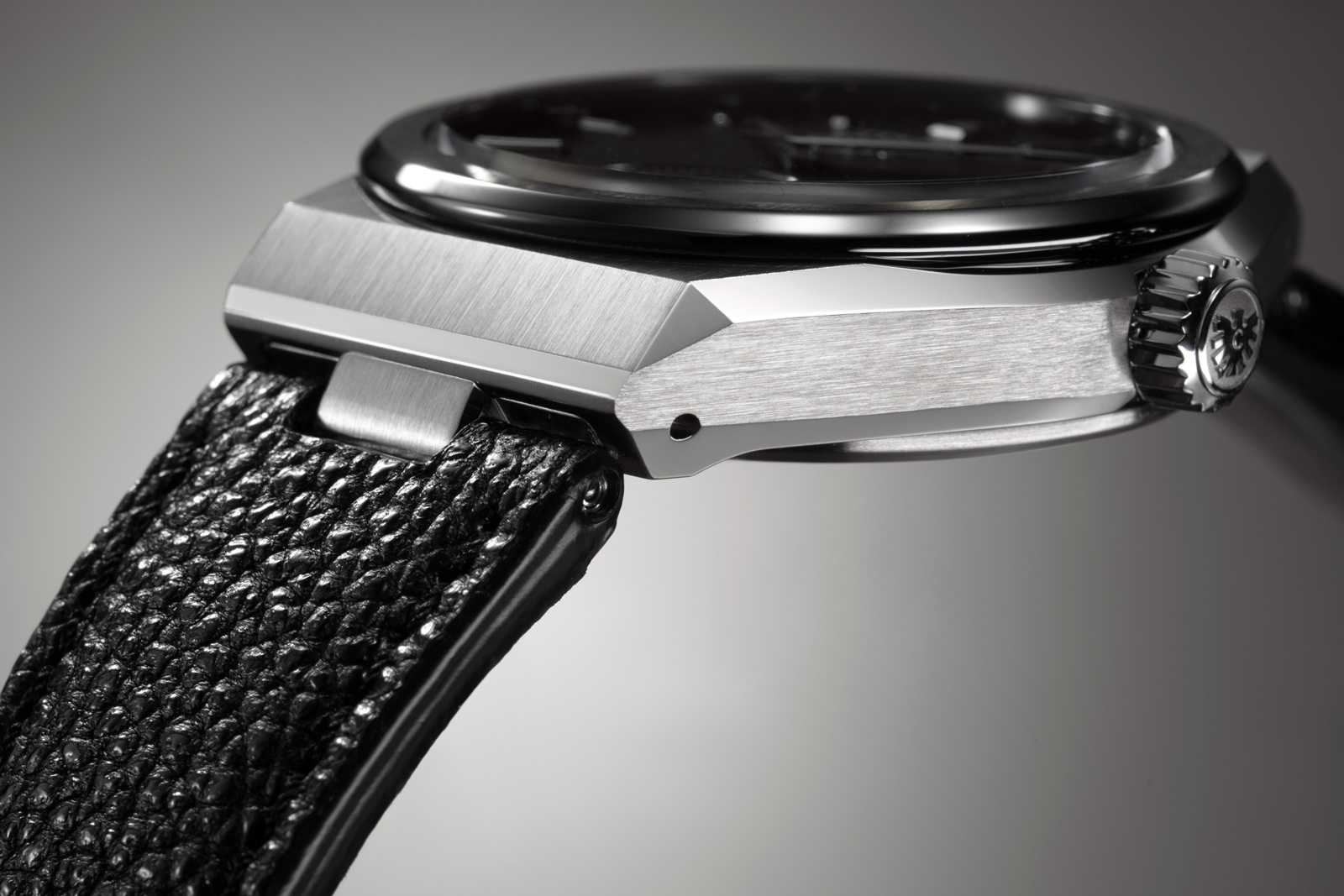 As far as mass-produced movements go, the cal. 0200 is one of the finest. Not only does it boast an elegant architecture that calls to mind a hand-wind movement, it is also precisely finished. The bridges sport wide, clean bevelling that is more often found in pricier haute horlogerie.

Arguably the biggest aesthetic weakness of the standard cal. 0200 is the rotor, which is somewhat plain compared to the rest of the movement. With the “Japanese Armor”, the rotor gets an upgrade: it’s solid 22k gold and bears the eagle emblem of The Citizen, the brand’s line of chronometers. 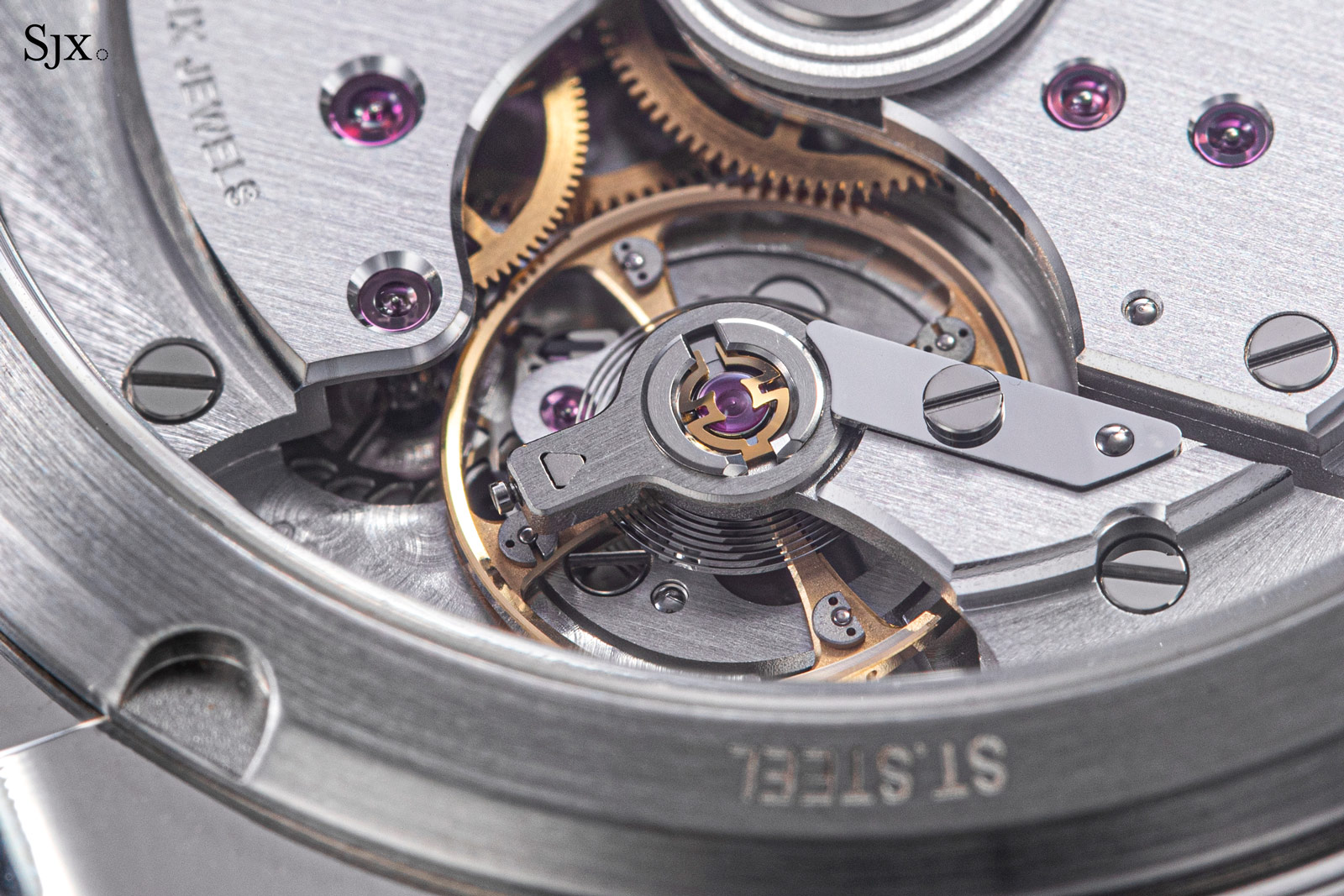 Detail of the balance assembly in the cal. 0200 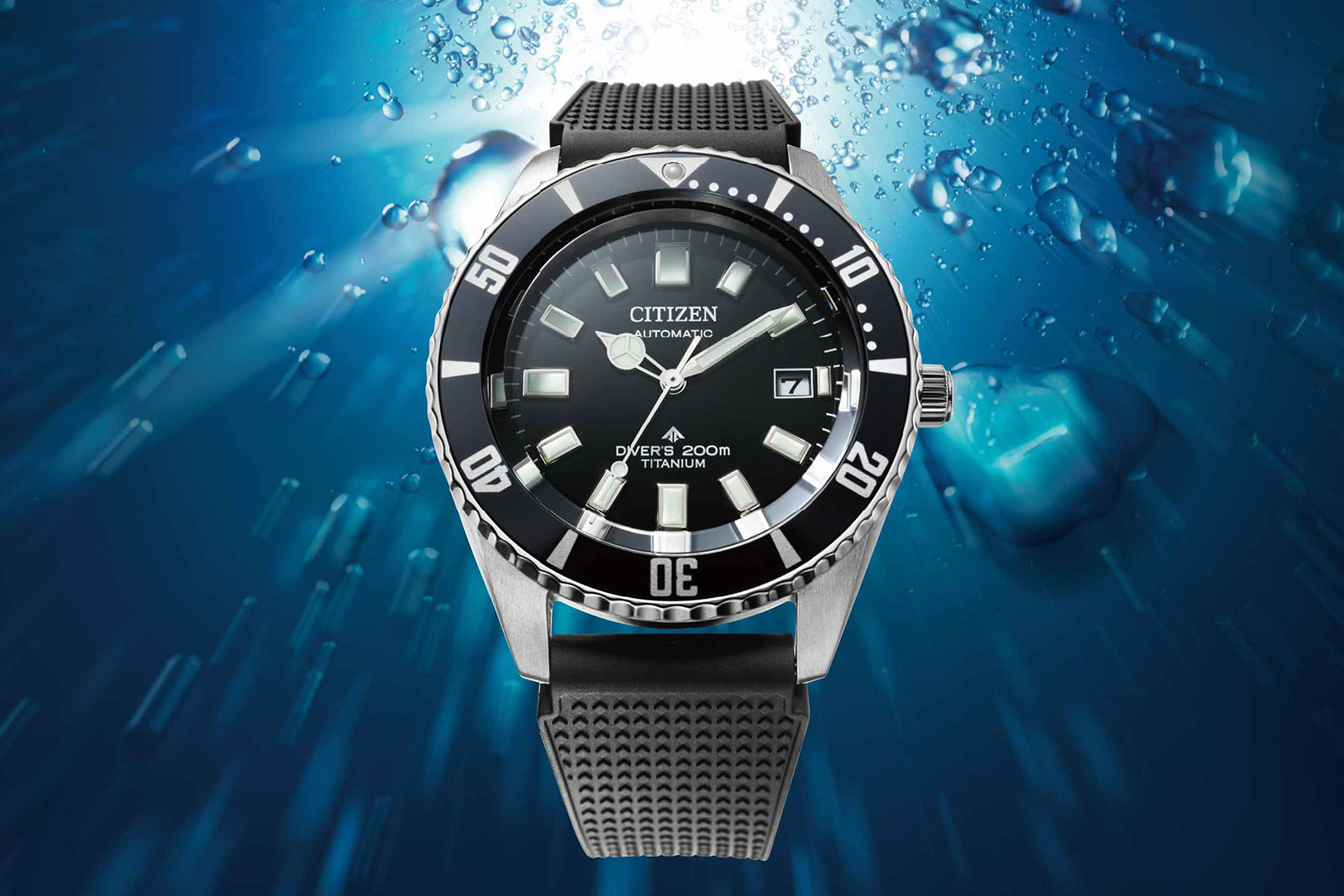 One of Citizen’s earlier dive watches, the Challenge Diver of 1977 is rated to 150 m – but it evidently can withstand more than pressure under water. In 1983, a long-submerged example was discovered at Long Reef Beach in Sydney, Australia. And despite being encrusted with barnacles, it was in working condition according to Citizen.

Now Citizen revisits the Challenge Diver – and memorialises the barnacle-covered watch – with the Promaster Mechanical Diver 200m “Fujitsubo”. The new watch retains the retro design and dimensions but has been thoroughly upgraded with modern materials and mechanics, including a titanium case and movement resistant to magnetic fields of up to 16,000 A/m (or about 200 Gauss). While the new launch is headlined by an interesting story, the watch itself is appealing, especially for its slim proportions and affordability.

At 41 mm wide and 12.3 mm tall, the Fujitsubo is one of the thinnest dive watches in this price segment. In fact, it’s even thinner than the vintage original. And it’s also slimmer than its most obvious rival, the Seiko 1965 Diver’s Modern Re-Interpretations “62MAS”, which is about 1 mm taller.

And it will also be lightweight. As is convention for most of Citizen’s mid-range dive watches, the case is Super Titanium, the brand’s proprietary alloy that has undergone surface hardening, leaving it five times more scratch resistant than steel. Visually, the Fujitsubo is simple and almost generic, but paradoxically that’s the appeal. The Fujitsubo is the most restrained mechanical dive watch in Citizen’s line up, both in terms of size and style – good news for anyone who wants something more minimal than its recent offerings.

It’s a faithful reproduction of the vintage original, right down to the bezel with its extra-large numerals. The markings on the bezel are wide enough they look exaggerated and almost comical, which is antithetical to the overall functional style. The bezel markings feel incongruent and are perhaps the only aspect I would change.

Overall, the Fujitsubo is one of the most compelling divers at this price considering the design, form, and specs.

At arm’s length, the Fujitsubo looks clean and traditional, but up close the dial and bezel reveals a few quirks. The hour hand is especially unusual with the familiar “Mercedes” tip that’s mostly associated with a famous Swiss brand. That said, the dial is faithful reproduction of that on the 1977 original, a period where brands borrowed liberally from each other –  just look at the number of 1970s sports watches with integrated bracelets in every level of the price spectrum.

As a result, the minute hand and the “lollipop” seconds feels a bit derivative, but combined with the extra-wide, typically 1970s hour markers, the overall look still manages to be original and appealingly retro. Inside the Fujitsubo is the cal. 9051. Compared to other Japanese movements at this price, the cal. 9051 is notable for its high frequency of 28,800 beats per hour that promises more stable timekeeping, instead of the more typical 21,600 beats per hour. However, it has a modest power reserve of only 42 hours. Limited edition: No
Availability: From summer 2022 at Citizen boutiques and retailers
Price: Unavailable at press time