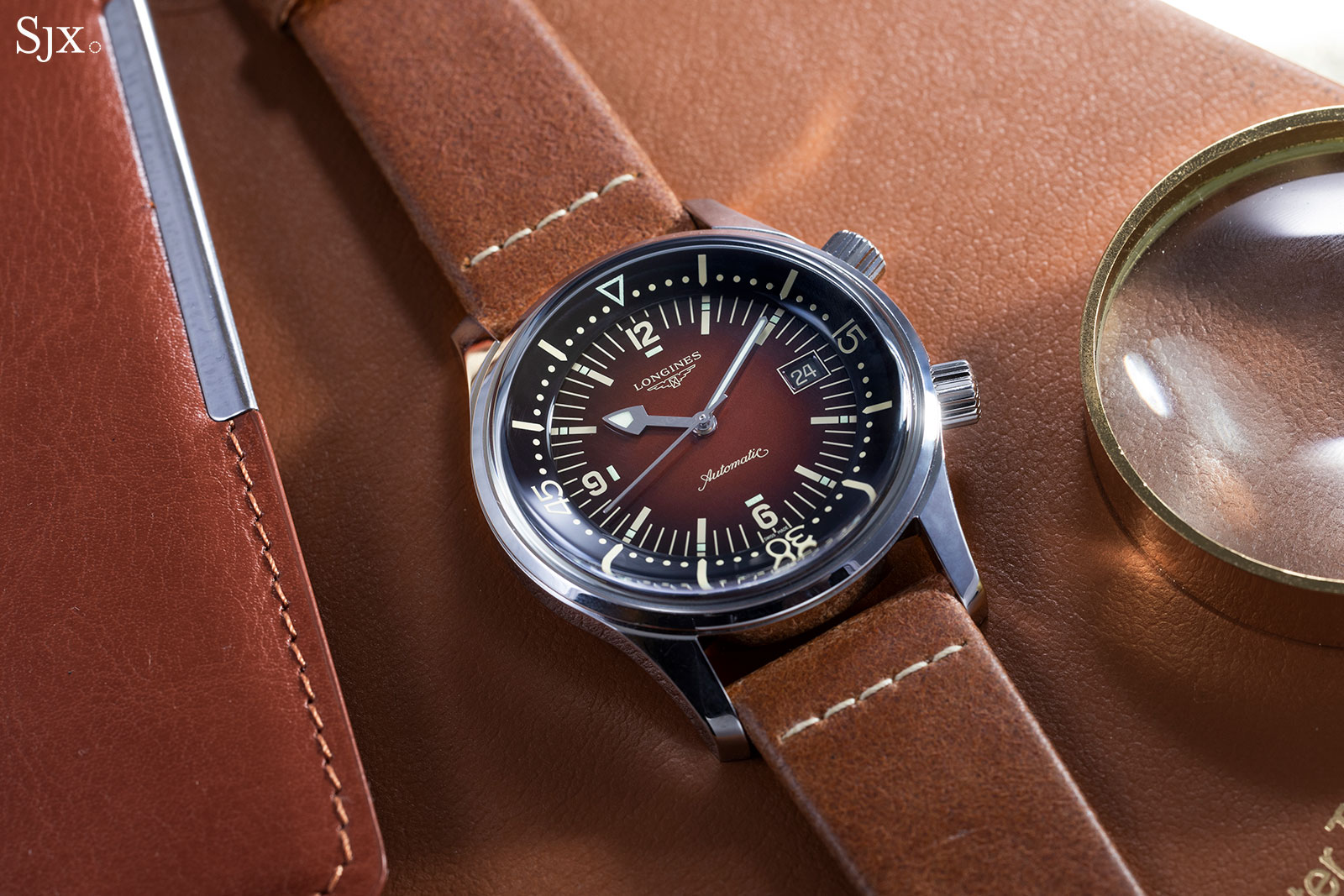 Introduced in 2007 as Longines’ first remake of a vintage sports watch, the original Legend Diver was one of the earliest entries into the vintage-reissue segment. And it was a faithful recreation that managed to channel the look and feel of the vintage-original ref. 7042, though Longines subsequently added a date display to the model.

In recent years, however, Longines begun to inject contemporary style into its remakes, including the Legend Diver, with last year’s 42 mm model in bronze with a striking, green fumé dial being a prime example. This year saw a continuation of the trend with a pair of new dials – in either blue or brown with a smoked finish – for the full-sized Legend Diver Watch in steel. 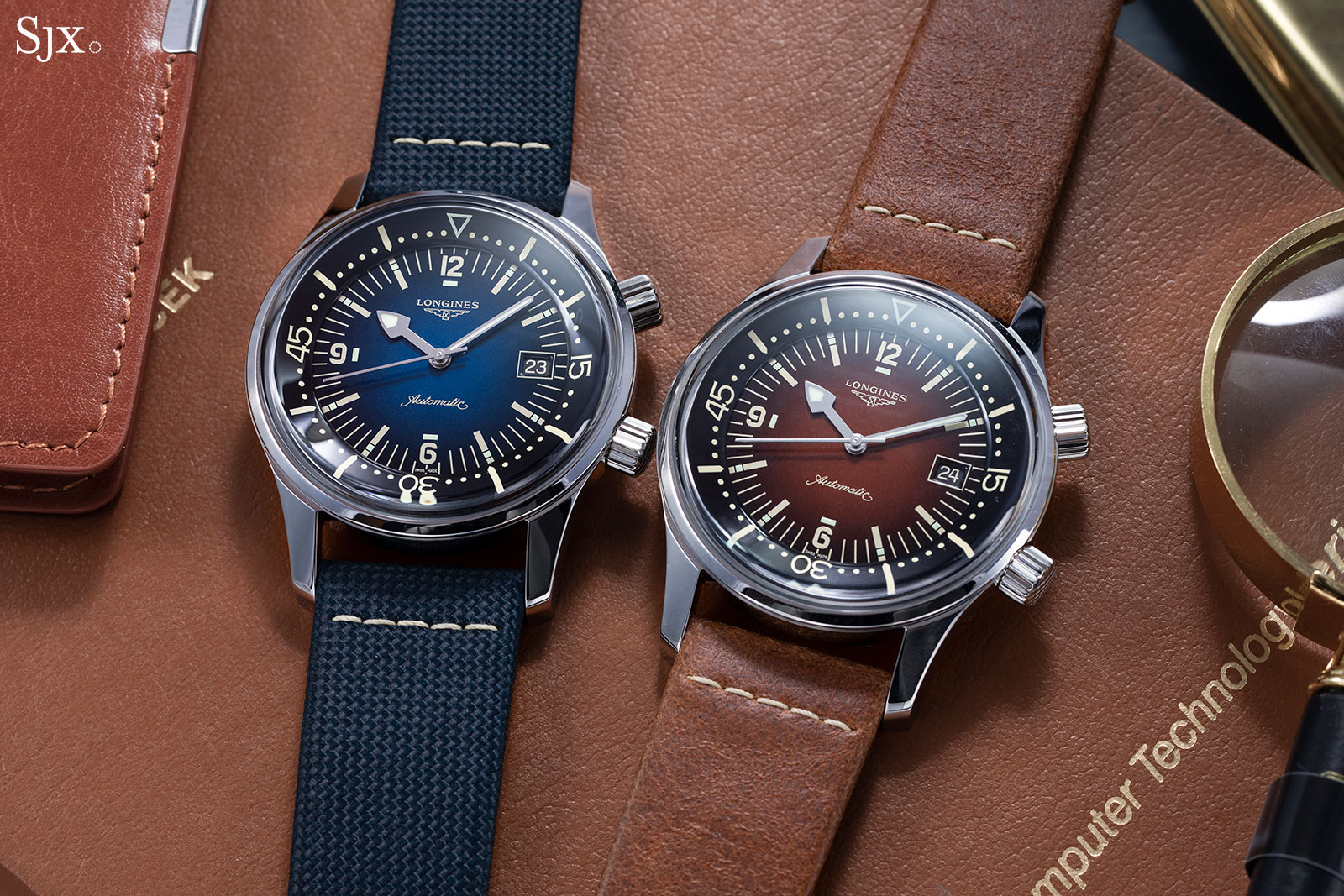 My first impression of the duo was simple: they are appealing in both design and colour. The design is clearly vintage; the remake stays true to the original. Its best feature is the inner rotating bezel adjusted via a second crown, which immediately sets it apart from typical dive watches that usually have a bulky external bezel.

But important is the colour, which unlike the design it is a modern addition. Though fashionable today, gradient or dégradé dials are were actually a thing in the 1970s, though never found on the vintage original.

The smoked dials lends the watch a youthful and contemporary feel. The blue is the most striking, though I personally prefer the warm and nostalgic brown dial that evokes a “tropical” dial. While the combination is inherently attractive, I also appreciate the rationale behind the concept – adding modern elements to vintage designs in a sympathetic manner, which adds a bit of originality and character to a remake. 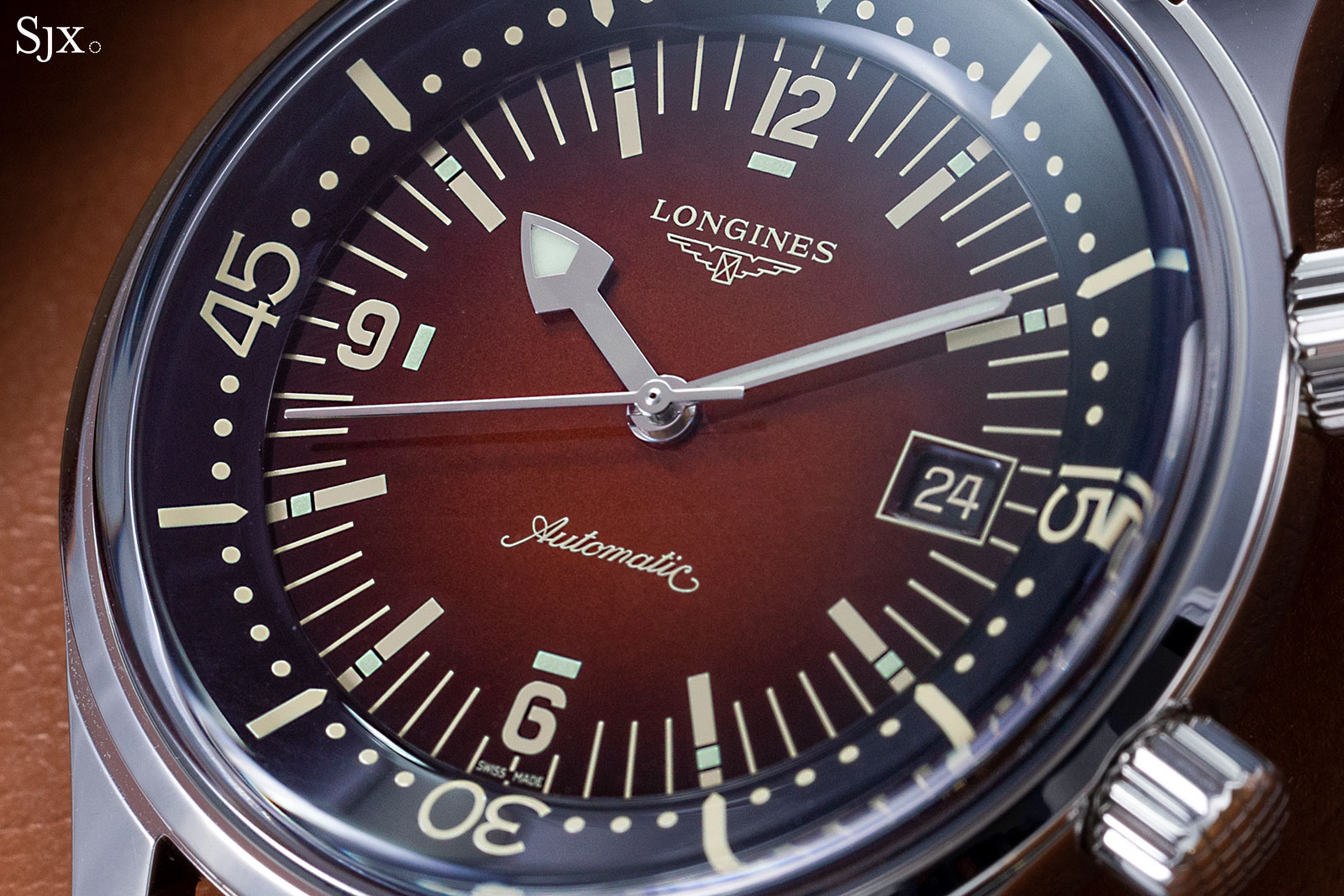 But still there are nits to pick. And as is almost universally the case with Longines’ remakes, it’s the date window. No doubt a practical feature, the date comes at the expense of dial symmetry. It just gets in the way of the design.

Then there’s the size, which at 42 mm is identical to the vintage original. Though it’s historically accurate, the size and long lugs means the watch wears too big, as many Longines remake do (though those tend to have been scaled up compared to the originals). The lengthy lugs also give away the simple case finishing, though that’s a minor complaint since the quality is acceptable for the price.

Despite the critique, the latest Legend Diver is a lovely watch (with an upgraded movement; more on that below). And it’s even more compelling given its price – a little over US$2,000 but it brings a lot to the table. Aside from the pleasing design, the Legend Diver also offers a movement that’s unusually high spec for the price. The calibre is equipped with silicon hairspring and has a running time of three days.

The novelty of the new Legend Diver is the fumé dial, which was first introduced on the “tropical” 36 mm model of 2019 (which is not a small watch but nonetheless feels like a ladies’ watch). But the colour only really gained traction after being installed in the 42 mm, bronze version.

As a result, the blue gradient dial is the one that’s actually new – it was neither found on the Legend Diver before nor inspired by the “tropical” vintage original. That means the blue version has a fresh appearance that distinguishes it from the other Legend Divers, which have a distinctly vintage feel.

That said, the details on the blue dial are clearly vintage style, with the markings done in a cream colour that calls to mind aged radium material. But the cream marking aren’t faux-patina, and are likely there just because the colour works well on blue. It adds a bit of warmth to the dial, avoiding the cold look of stark white indices. In other words, the combination of blue and cream was clearly intended to be a modern design. 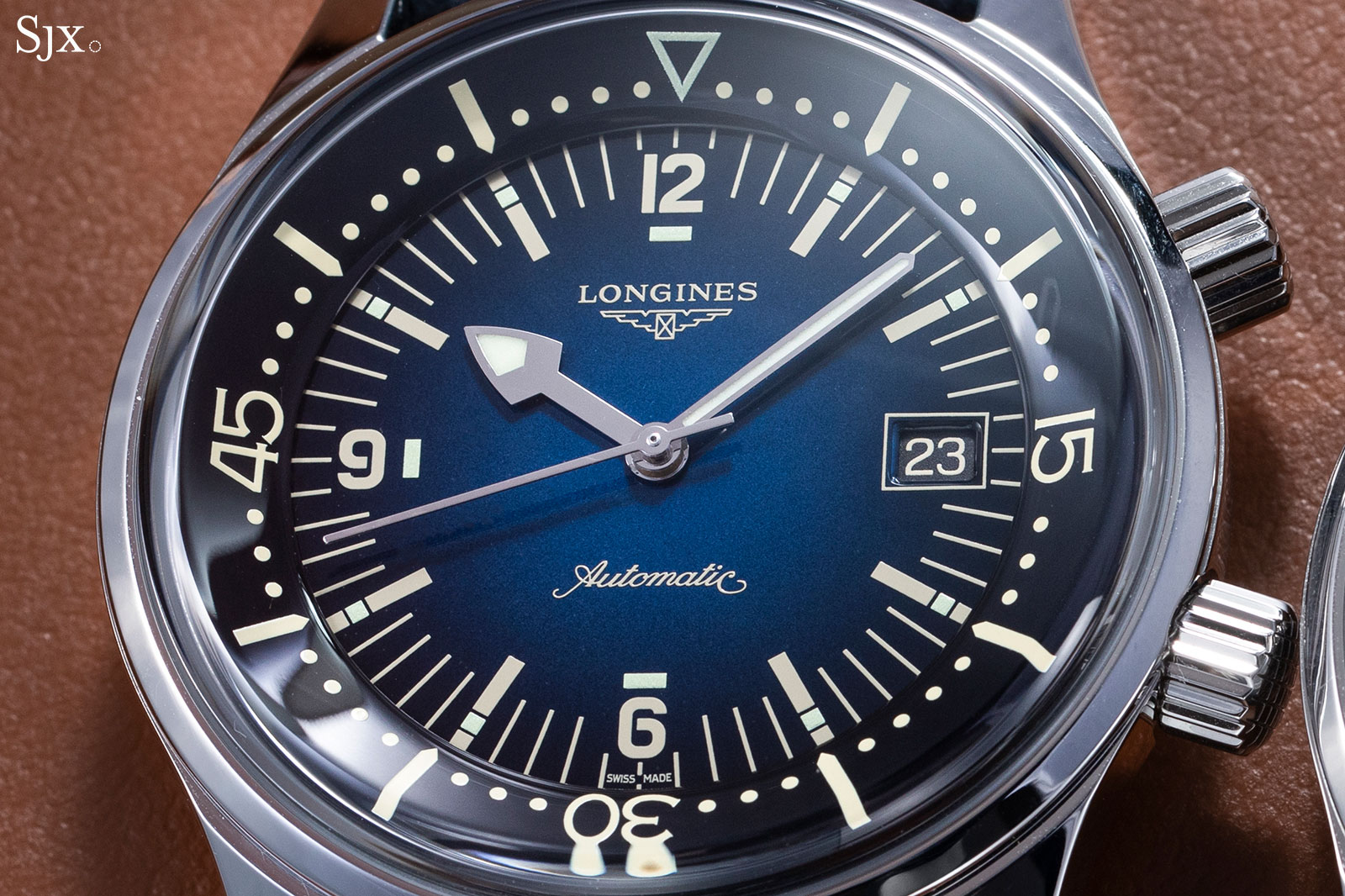 While the blue is eminently modern, the brown dial is the opposite. It resembles the faded, “tropical” dials found some vintage examples. Still, it is not exactly a “tropical” dial replica because of the gradient effect, as well as the omission of simulated ageing like the random speckling found on the Heritage Marine National. 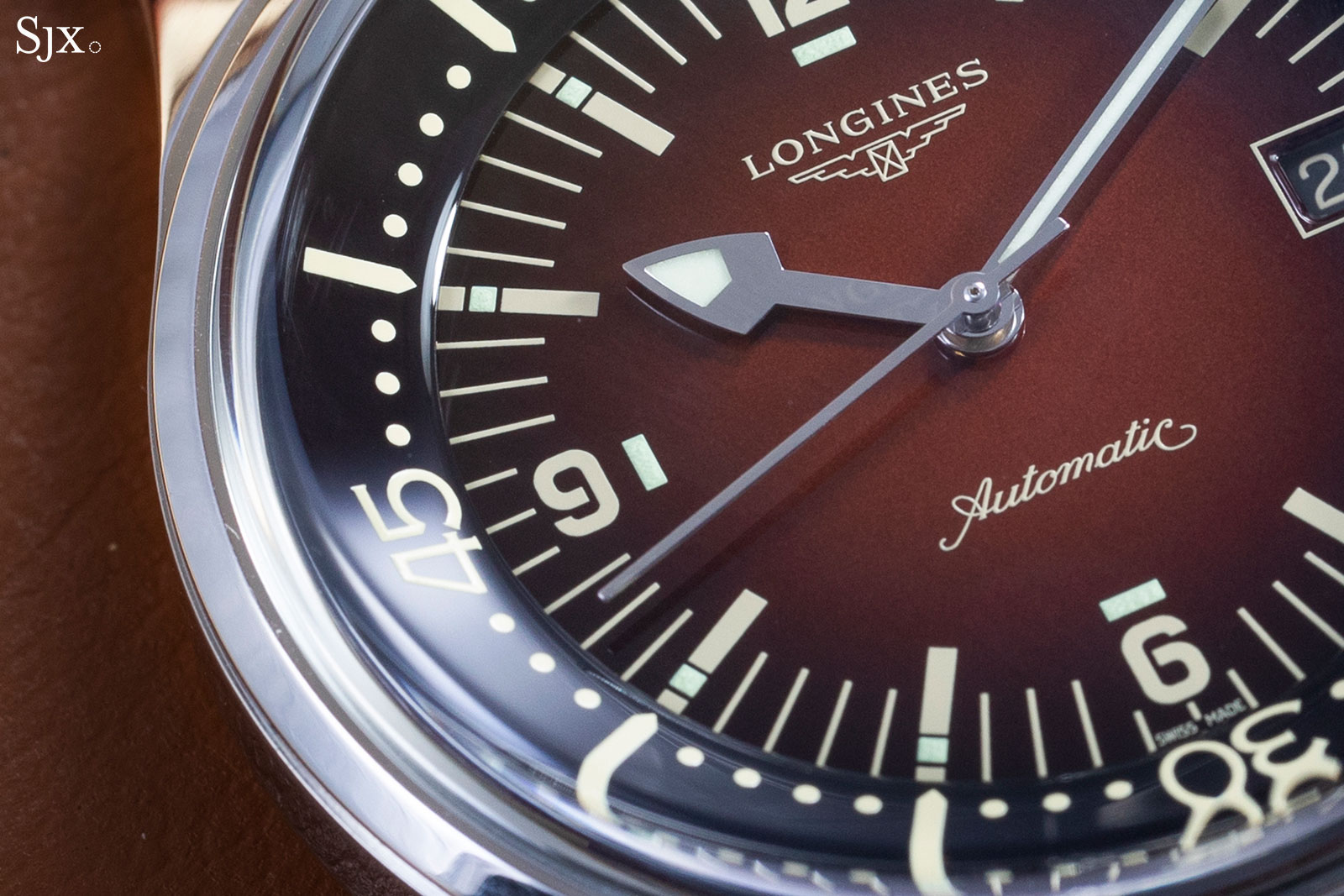 Appealing as it is, there’s are a few aspects of the Legend Diver that can be perfected, at least in terms of my personal taste (which I am sure other enthusiasts share).

One is the date window at three, which I wish would go away. Its positioned is good enough, sitting just by the inner rotating bezel, but the window is incongruent with the dial and chips away at its symmetry. The bronze Legend Diver, in comparison, is immediately more appealing in its no-date format.

Then there’s the size. While 42 mm is faithful to the original, it does feel big. The size is a shame because the dial colours will certainly appeal to more people were the cases smaller, even if only slightly. A size between the current 42 mm and 36 mm would be most welcome.

Much of the size stems from the long lugs, which is further accentuated by the fact that the lugs are thick and simple in form, making them seem massive. Shorter lugs would help reduce the perceived size of the watch, and even better if they had less angular edges and steeper downward curve.

Also, the crowns feel excessively large, being notably taller than those on vintage original. Already substantial in diameter, the crowns don’t need to be this tall for good grip. Crowns closer to those on the vintage original would be just as useful but less prominent.

That brings us to the the case construction and finish, which is simple, perhaps too simple. Being entirely polished on all surfaces, it lacks the details found on the competition, but entirely acceptable for the price. And it should be pointed out the finish is true to the vintage original, like the case diameter. Still, upgrading the case finishing will elevate Longines and its watches, possibly to the level where it competes with higher-value brands such as Tudor. 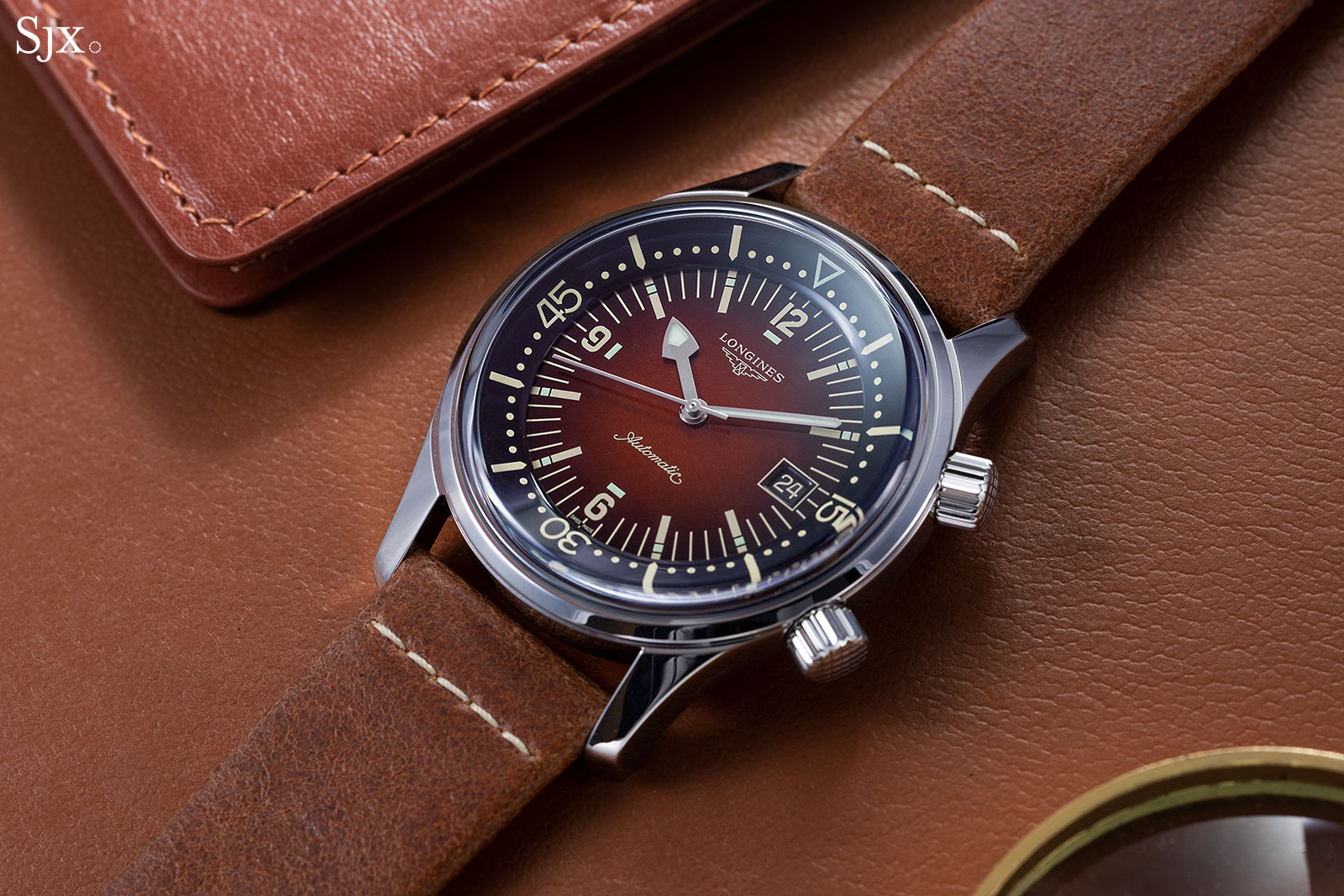 Where I have no wish for anything more is the movement inside. The Legend Diver has long been powered by the L888, but the calibre inside the latest model appears to have been quietly upgraded with a longer power reserve.

Essentially a majorly enhanced ETA 2892 – kitted out with a silicon hairspring amongst other things – the L888 found in earlier generations of the Legend Diver had a frequency of 25,200 beats per hour (3.5 Hz) and a 64-hour power reserve.

The latest version of the movement retains the same beat rate but gains eight hours of running time, presumably achieved through the optimisation of the barrel (which is one of the improvements in the latest-generation of Rolex cal. 32xx that have a similarly lengthened power reserve).

With its history and unusual design, the Longines Legend Diver is an intrinsically appealing watch. The new dial colours make it more attractive, while preserving its affordability.

Granted, it’s not perfect. It could have been better by doing away with the date window (or a more wearable case), but all in all it’s an appealing watch that ticks almost all the boxes in the US$2,000-ish dive watch category. 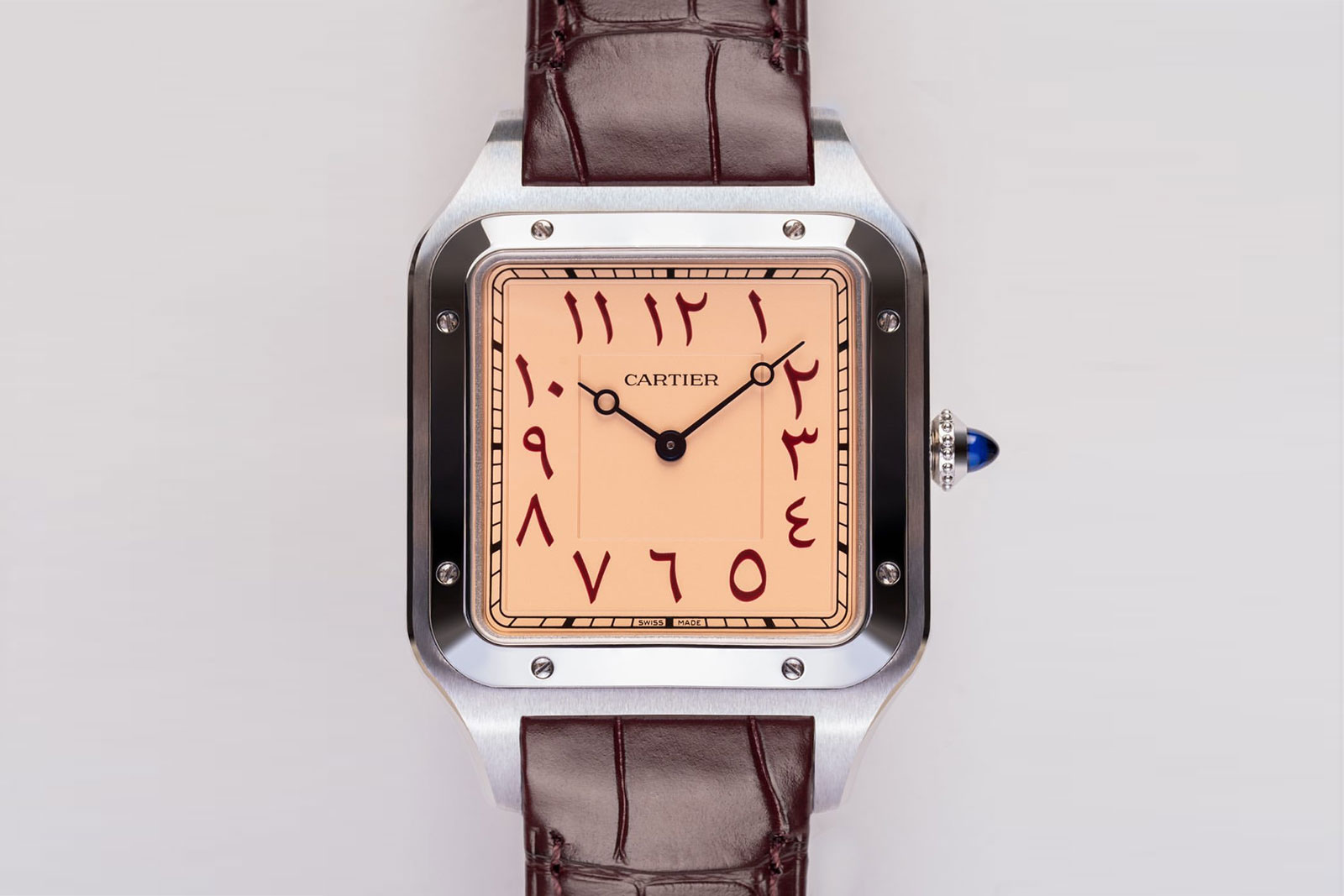 A collectors’ club based in the United Arab Emirates, Dubai Watch Club recently announced the latest special edition for its members. Based on the largest version of the Cartier wristwatch launched last year, the Santos-Dumont Extra-Large “Dubai Watch Club” is a distinctive new take on the classic design.

Featuring a salmon dial inspired by the Santos-Dumont 90th Anniversary limited edition of 1994, the Dubai Watch Club version features Eastern Arabic hour numerals as is tradition for special editions made for the region. 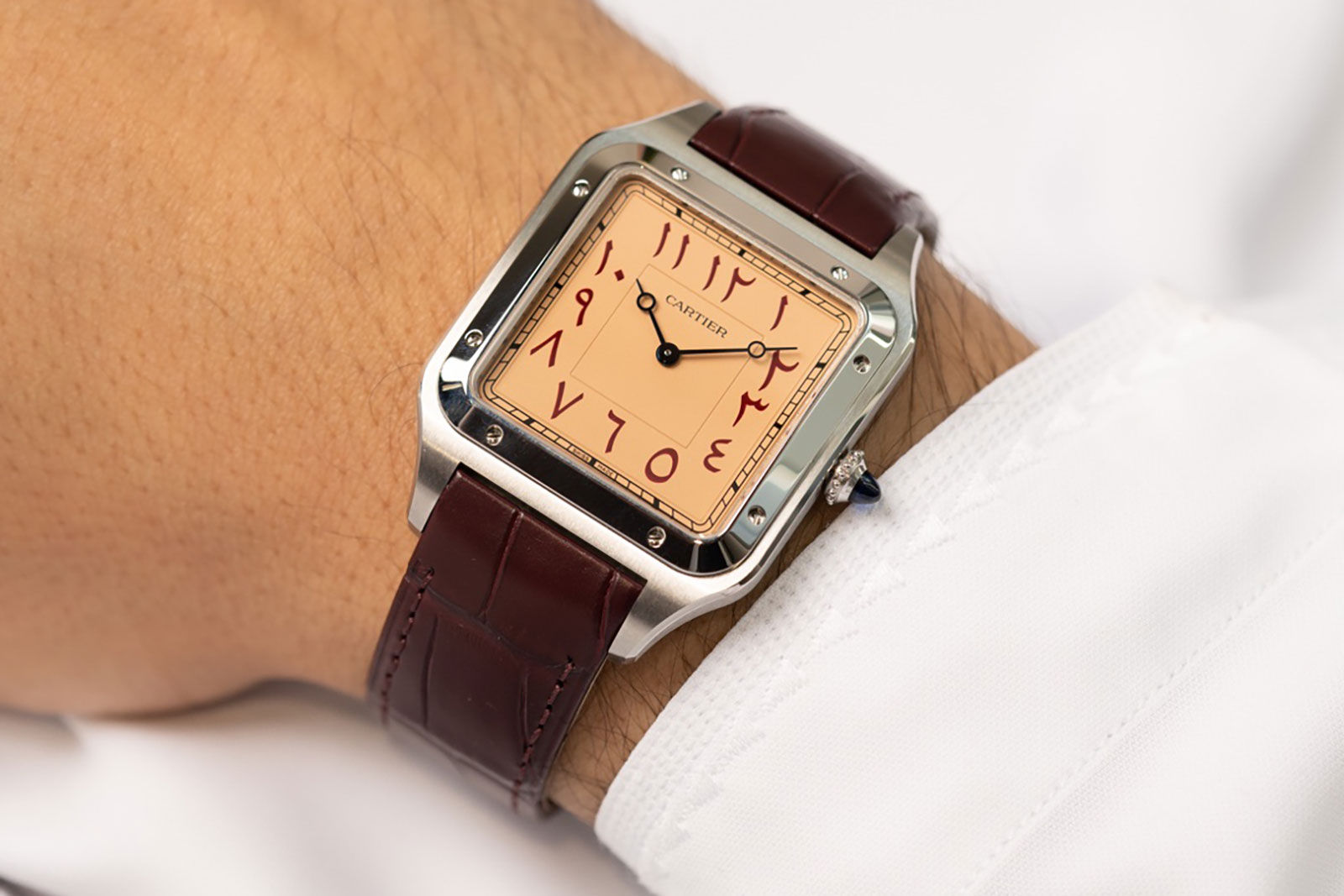 A large but elegant watch, the Santos-Dumont XL is appealing in its original form, albeit looking very much like a classical Cartier. The Dubai Watch Club edition injects novelty into the design without doing too much. In fact, the only changes to the watch are the dial colour and hands, although Breguet hands were historically found on many Cartier models. 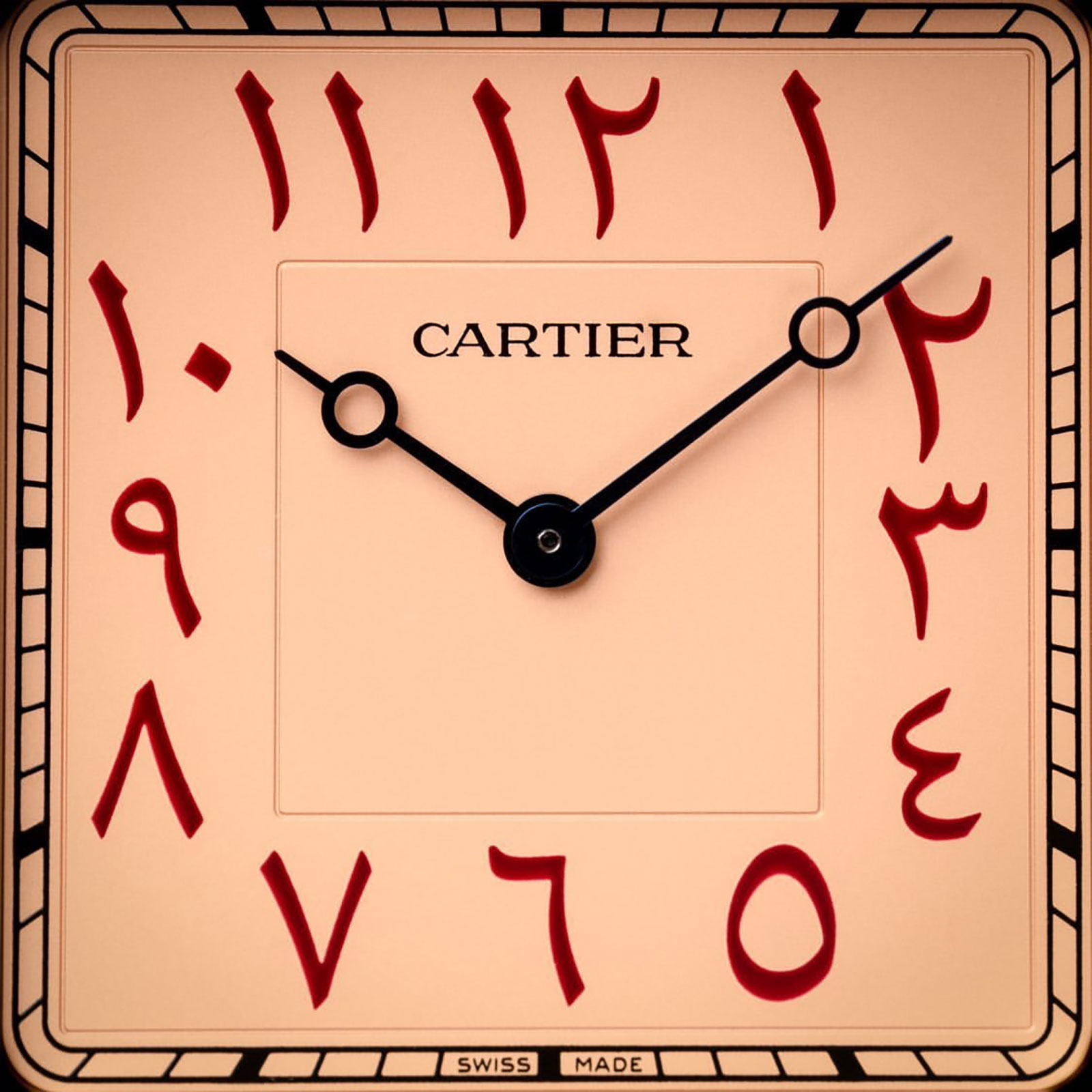 But the best feature of the dial is the colour of the numerals, which are rendered in a dark red that was meant to mimic Cartier’s house colour. Notably, red numerals were traditionally found only on platinum watches, while the Dubai Watch Club edition is steel.

The case material means the special edition is an easily affordable US$7,500, but that’s a moot point as the watch is available only to members of Dubai Watch Club.

Founded by local collector Adel Al Rahmani, Dubai Watch Club has some 120 members in its ranks. The club has commissioned a handful of special editions in the past, including from Jaeger-LeCoultre, Roger Dubuis, and H. Moser & Cie. 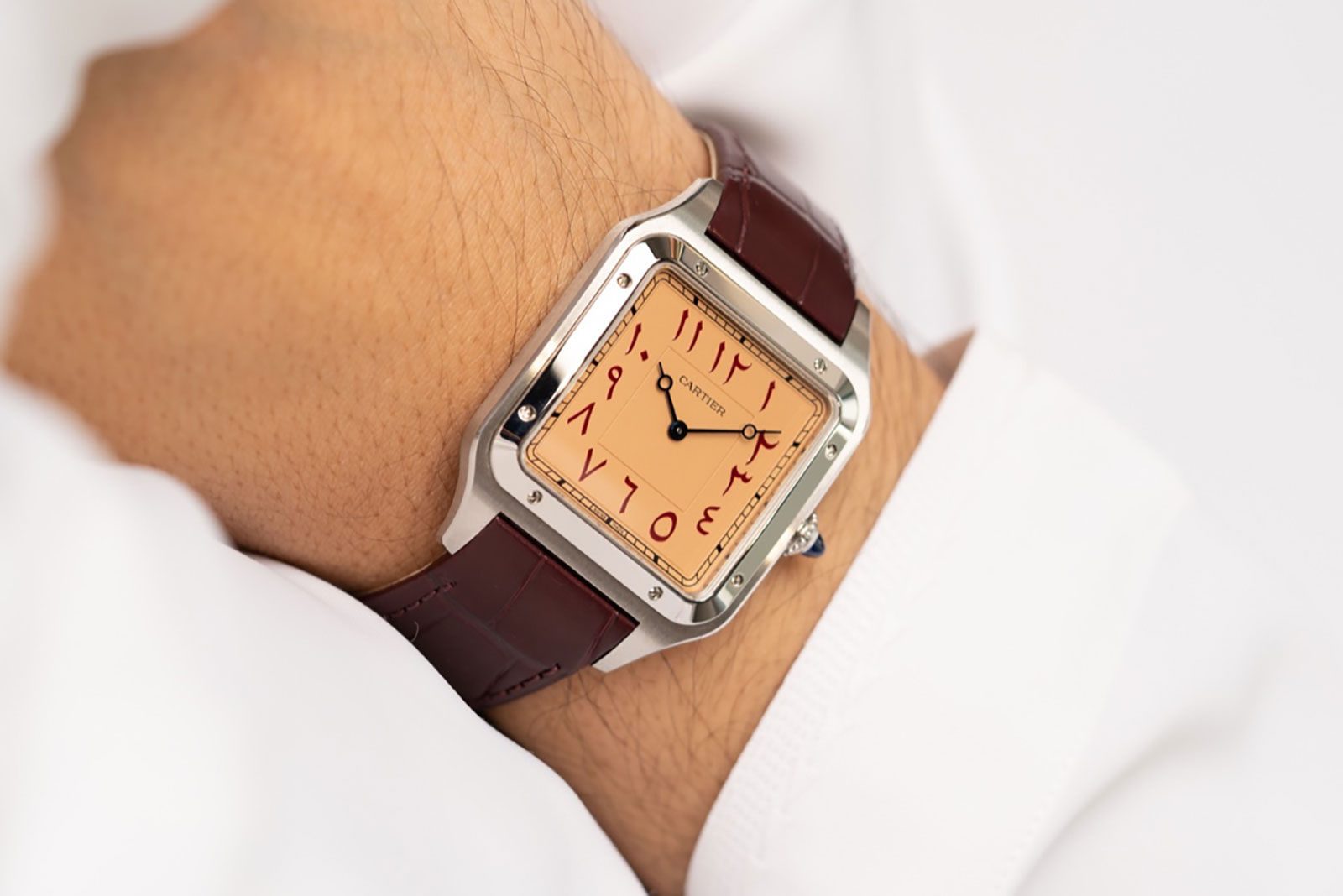 Its first collaboration with Cartier, the new Santos-Dumont is based on the Extra-Large model, which is the largest on offer. It has a steel case that’s 46.6 mm by 33.9 mm, but a slim 7.5 mm high.

The case is identical to that of the standard version, except for the back that has been engraved with the club logo as well as a serial number. 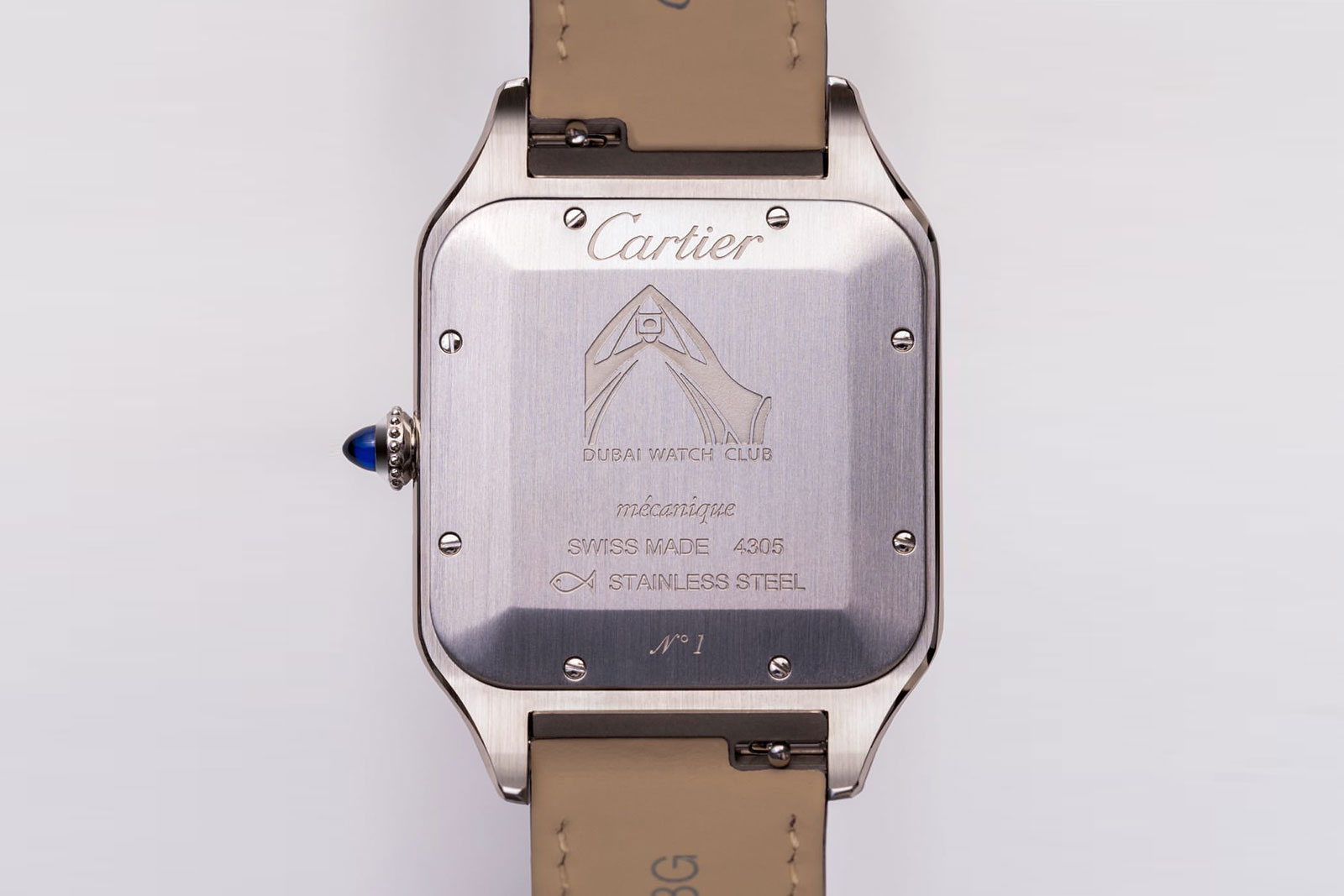 And the watch is powered by the 430 MC, which is actually a Piaget cal. 430P, an ultra-thin movement just over 2 mm high. Because of the movement’s compact dimensions – it’s a bit over 20 mm in diameter – Cartier has long used this calibre in its slim, form watches, including various versions of the Tank.

All photos courtesy of unekual.

Limited edition: 50 pieces
Availability: Only to members of Dubai Watch Club
Price: AED27,500 (equivalent to US$7,500)

For more, visit Cartier.com and Dubai Watch Club on Instagram.