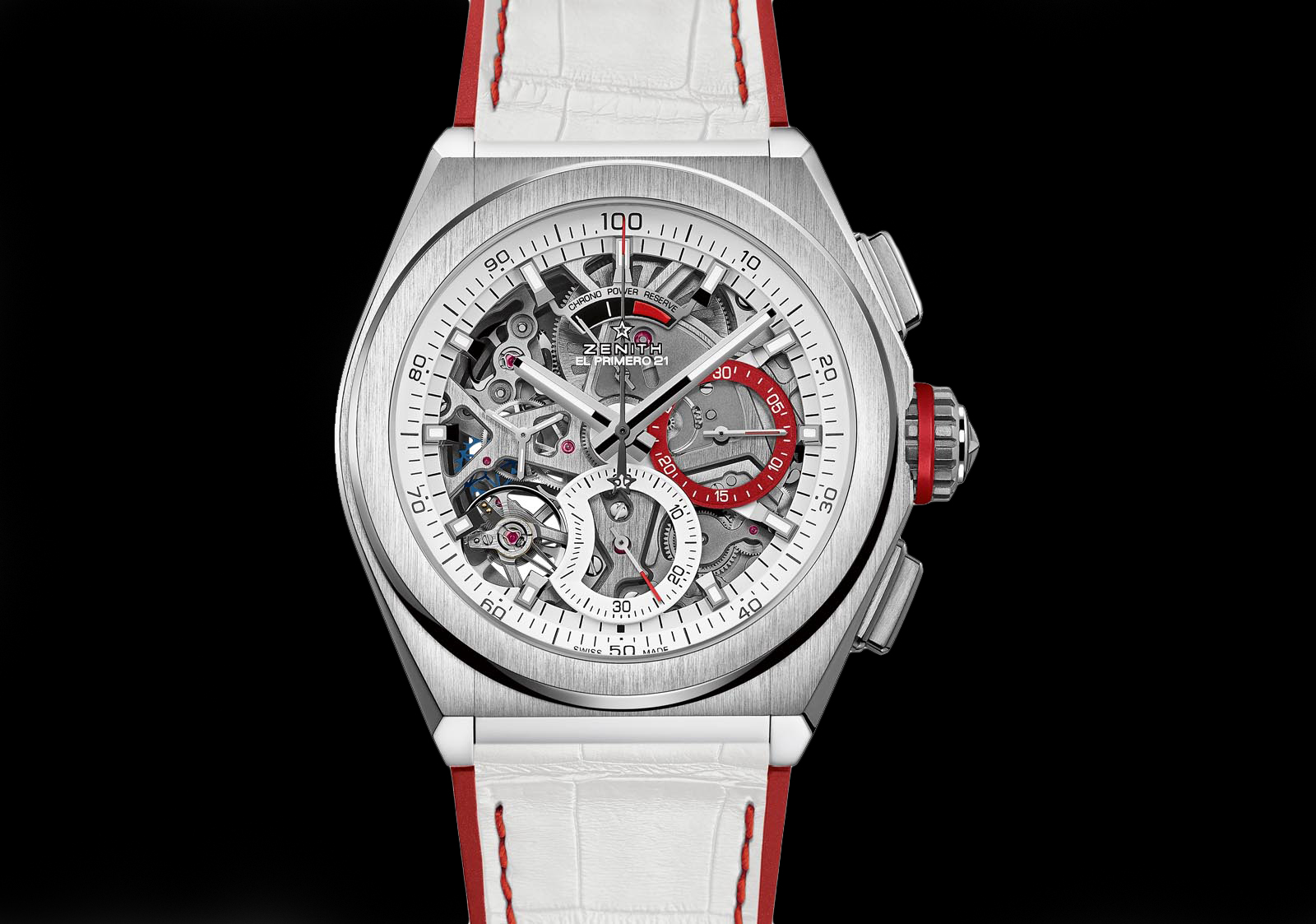 Produced for the key markets in an important region, the Defy El Primero 21 South East Asia Edition is based on Zenith’s well-priced, 1/100th of a second chronograph, with one edition each for Singapore, Indonesia and Malaysia. All three watches share the same red and white livery – reflecting the colours found in each country’s national flag – but with a respective national landmark printed on the case back.

The Defy El Primero 21 is one of two true 1/100th of a second chronographs on the market that are serially produced – the other being the Mikrograph produced by Zenith’s sister company TAG Heuer. Both share a similar movement architecture, but the Mikrograph came first and inspired the construction of the Zenith calibre. 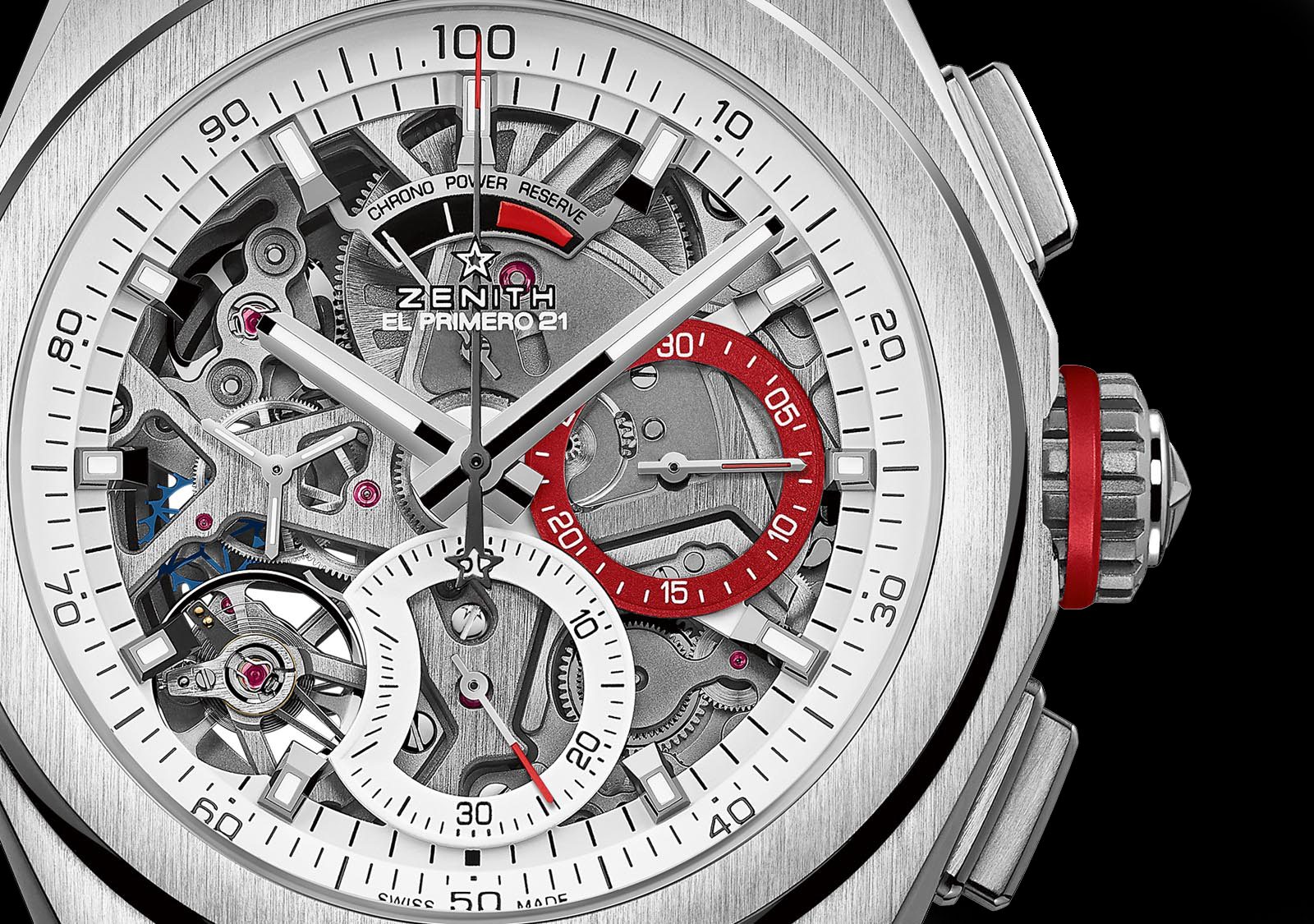 The colour scheme of the trio is a nod to the flag of each country, all of which happen to include red and white. The power reserve, minute counter, chronograph hands and crown are accented in red.

The watch is otherwise mechanically identical to the standard version. It is powered by the self-winding El Primero 9004 movement, which utilises two independent sets of mainsprings, gear trains and balance wheels.

And more so important in a high frequency movement, the escape wheels – the fastest rotating wheel in the transmission system – and pallet forks are made of silicon, which operates without friction and requires little energy, being less than a third the density of steel. The Singapore edition, with the Marina Bay Sands casino complex on the back

The movement is equipped with an openworked star-shaped rotor that is visible through a sapphire case back, which has been printed with an iconic landmark – Marina Bay Sands building for Singapore, the Petronas Twin Towers for Malaysia, and the Borobudur temple for Indonesia. And each watch is fitted with an alligator strap that echoes the colours of each country’s flag. 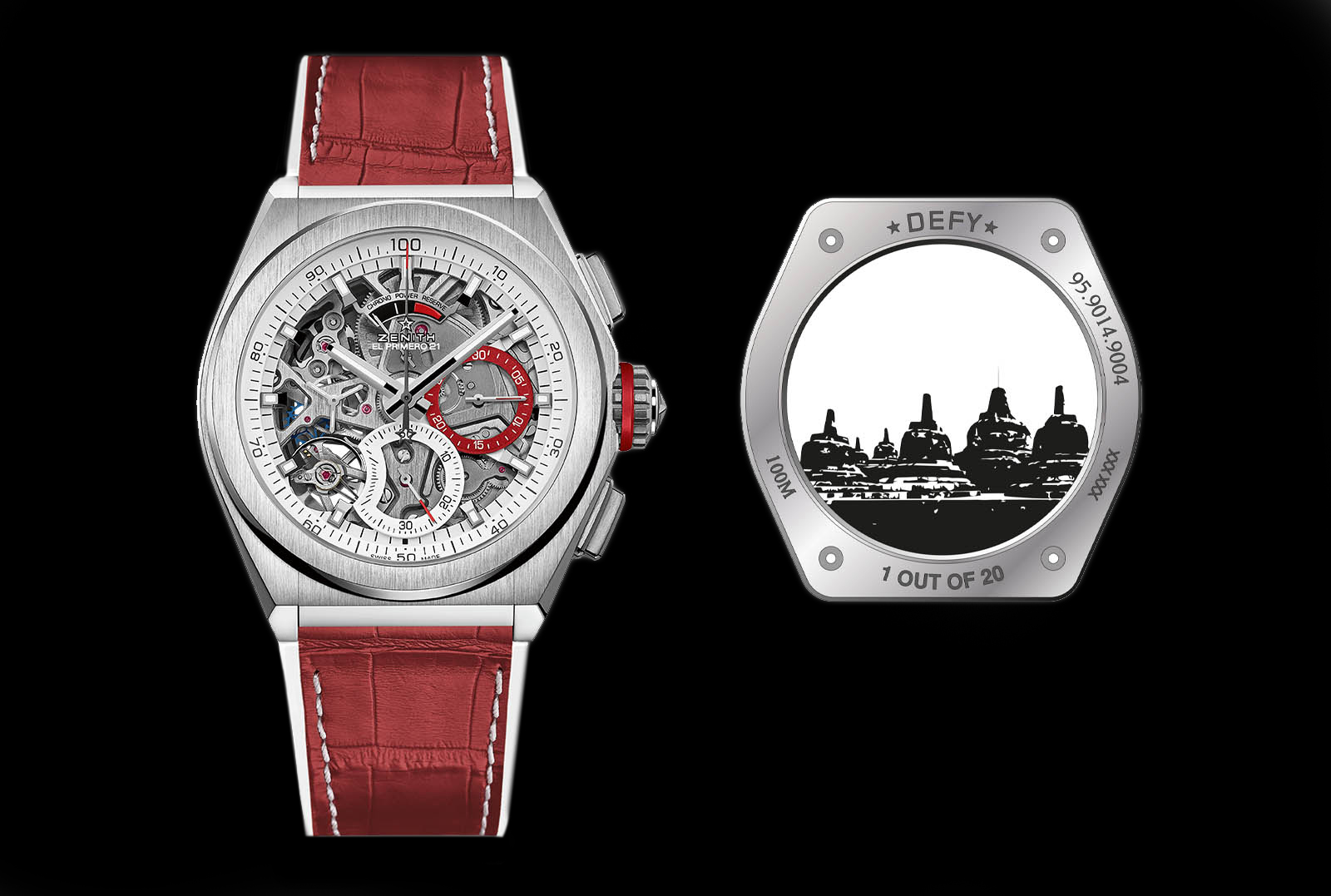 The Borobudur temple on the Indonesia edition 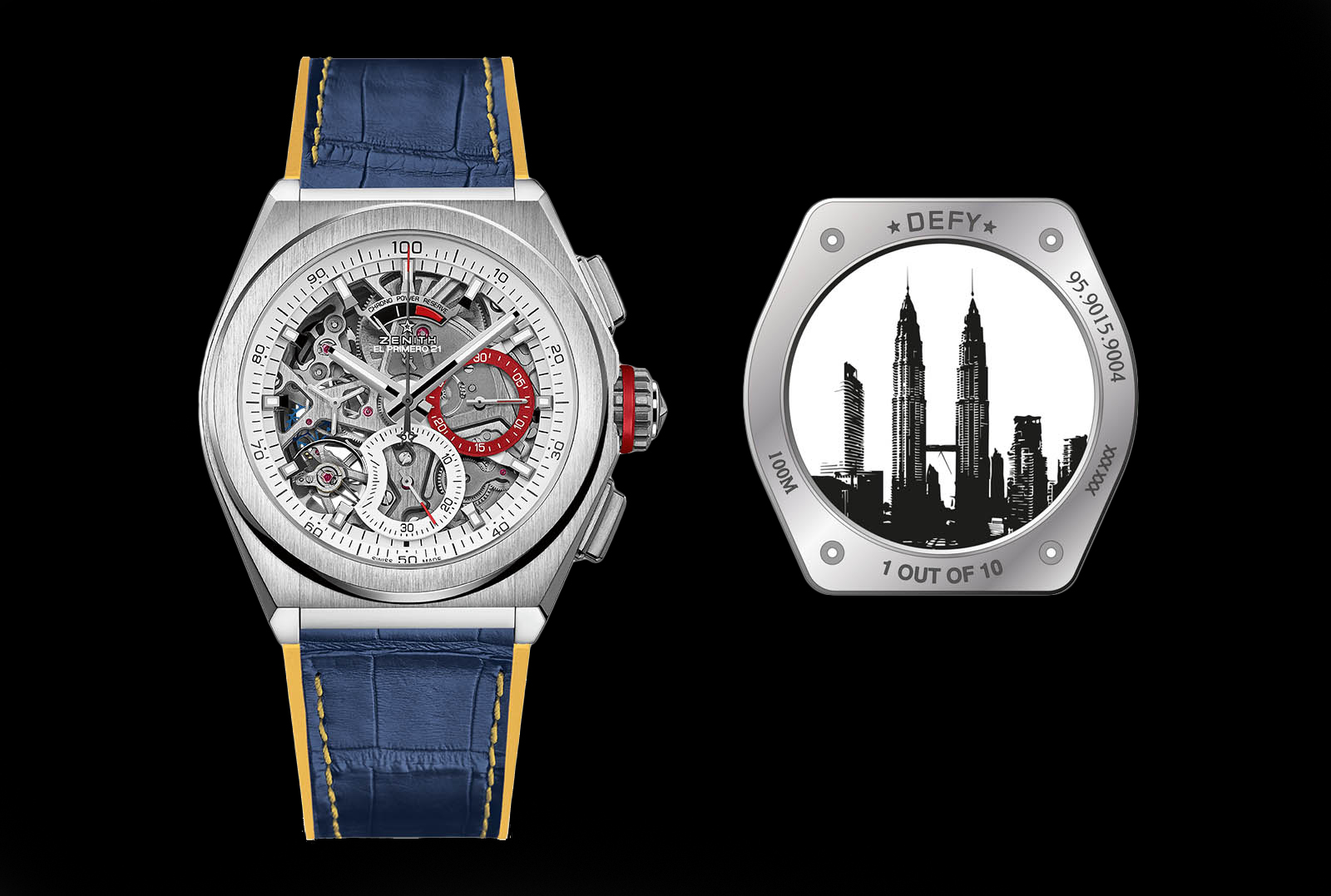 The Malaysia edition, with the Petronas Twin Towers

The dimensions of the watch remain unchanged at 44mm in diameter and 14.4mm in height due to the movement’s dual architecture. However, the case is made of titanium, which keeps the watch lightweight despite its size. 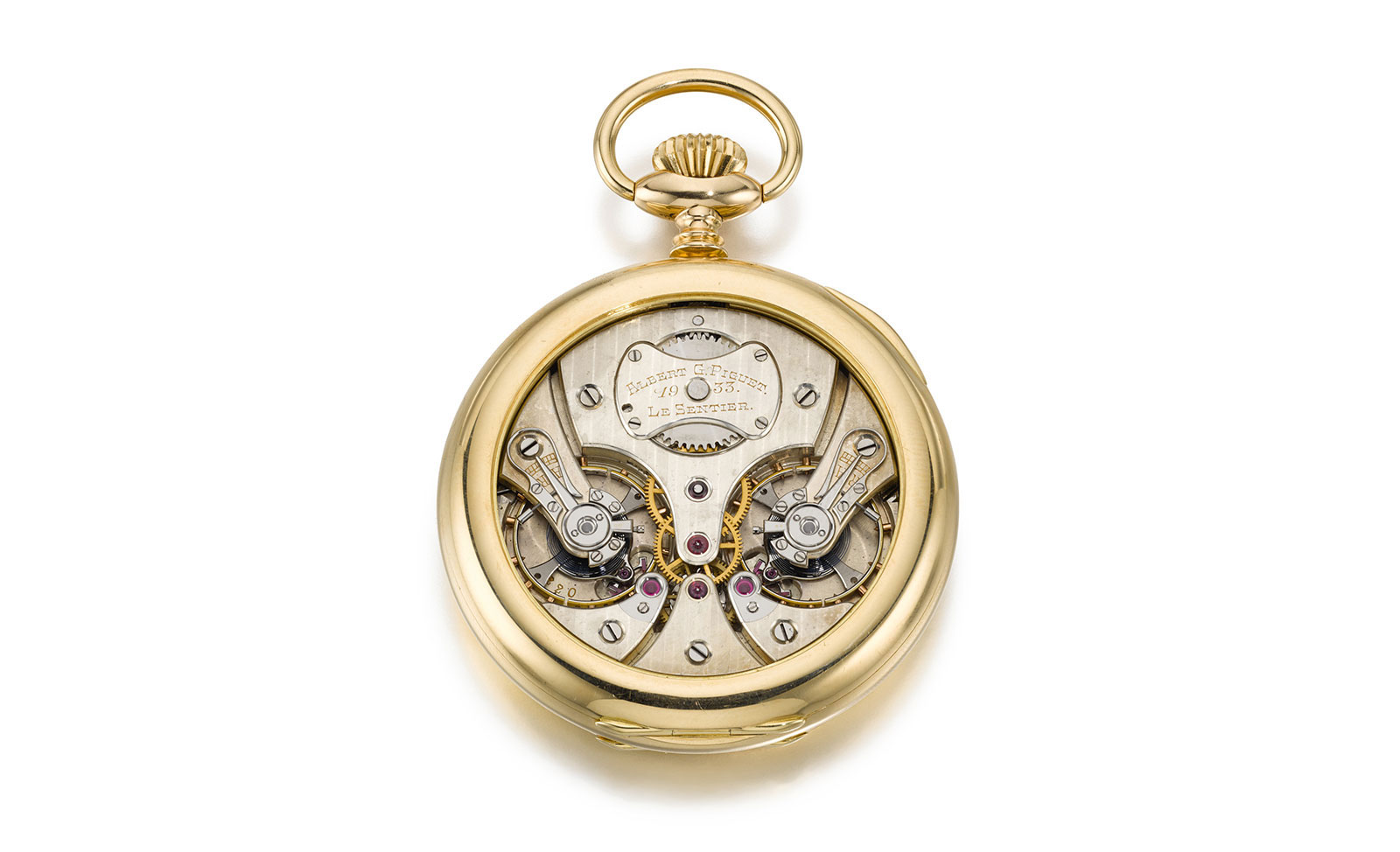 One of the most interesting lots in the second instalment of Masterworks of Time at Sotheby’s that just concluded was a seemingly unassuming pocket watch with an estimate of just 7,000-10,000 Swiss francs.

But the pocket watch contains a movement with a single gear train driving double balance wheels linked by a differential, constructed to keep time according to the principles of resonance. This is one of the very movements that inspired Philippe Dufour to create the Duality. And its appearance at auction comes at an opportune time, with F.P. Journe going to launch an entirely new Resonance movement in 2020. The movement was made by Albert G. Piguet (1914-2000), a noted watchmaker who finished the movement in 1933, just before graduating from the École d’Horlogerie in Le Sentier, then the premiere watchmaking school in the Vallee de Joux.

He joined movement maker Lemania after graduation, and eventually rose to technical director. Piguet stayed in that role from 1948 to 1980, during which he helped develop numerous calibres, including the important CH27 chronograph movement that later became the cal. 321 found in the early Omega Speedmaster Moonwatch, and also the cal. 2310 used by the likes of Patek Philippe and Vacheron Constantin. 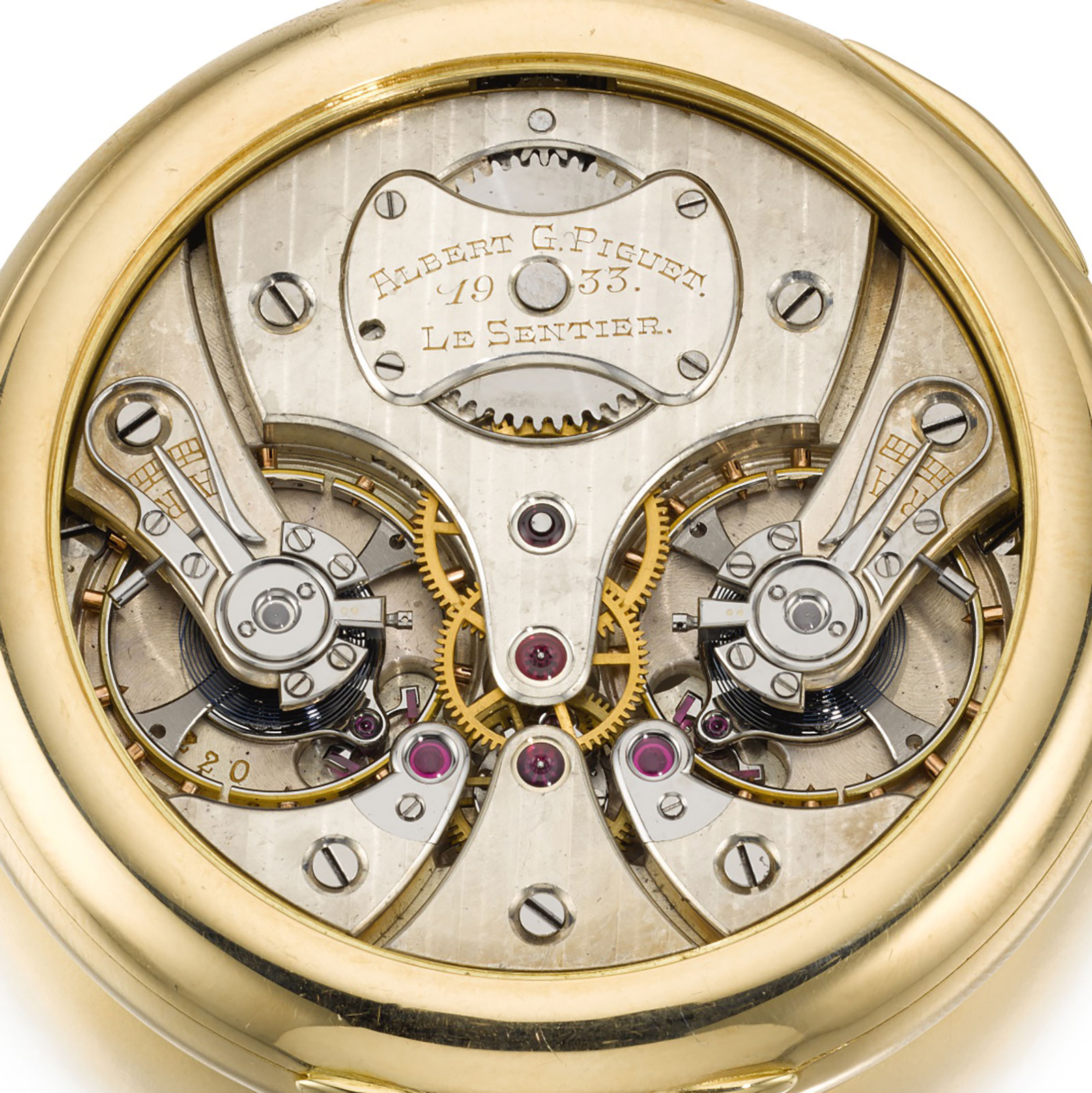 Piguet’s 1933 pocket watch movement is just one of six produced between 1932 and 1934 by students at the watchmaking school, working under the tutelage of headmaster Marcel Builleumier. Two watches of each movement size – 38mm, 43mm and 48mm – were produced, and the Piguet is one of the smallest, 38mm calibres. Another slightly larger example from the series that was formerly in the Time Museum, founded by American industrialist Seth Atwood, was sold in 2004 when the museum dispersed its collection.

Now presented in a plain 18k yellow gold case with an unsigned white enamel dial, the Piguet movement was original cased in a no-nonsense nickel case, but recased when Mr Piguet sold it in 1978 at Galerie d’Horlogerie Ancienne, the predecessor of Antiquorum. The next time it was sold publicly was at Antiquorum Geneva in 1998, when it was acquired by a legendary German pocket watch collector whose estate consigned it to Sotheby’s. 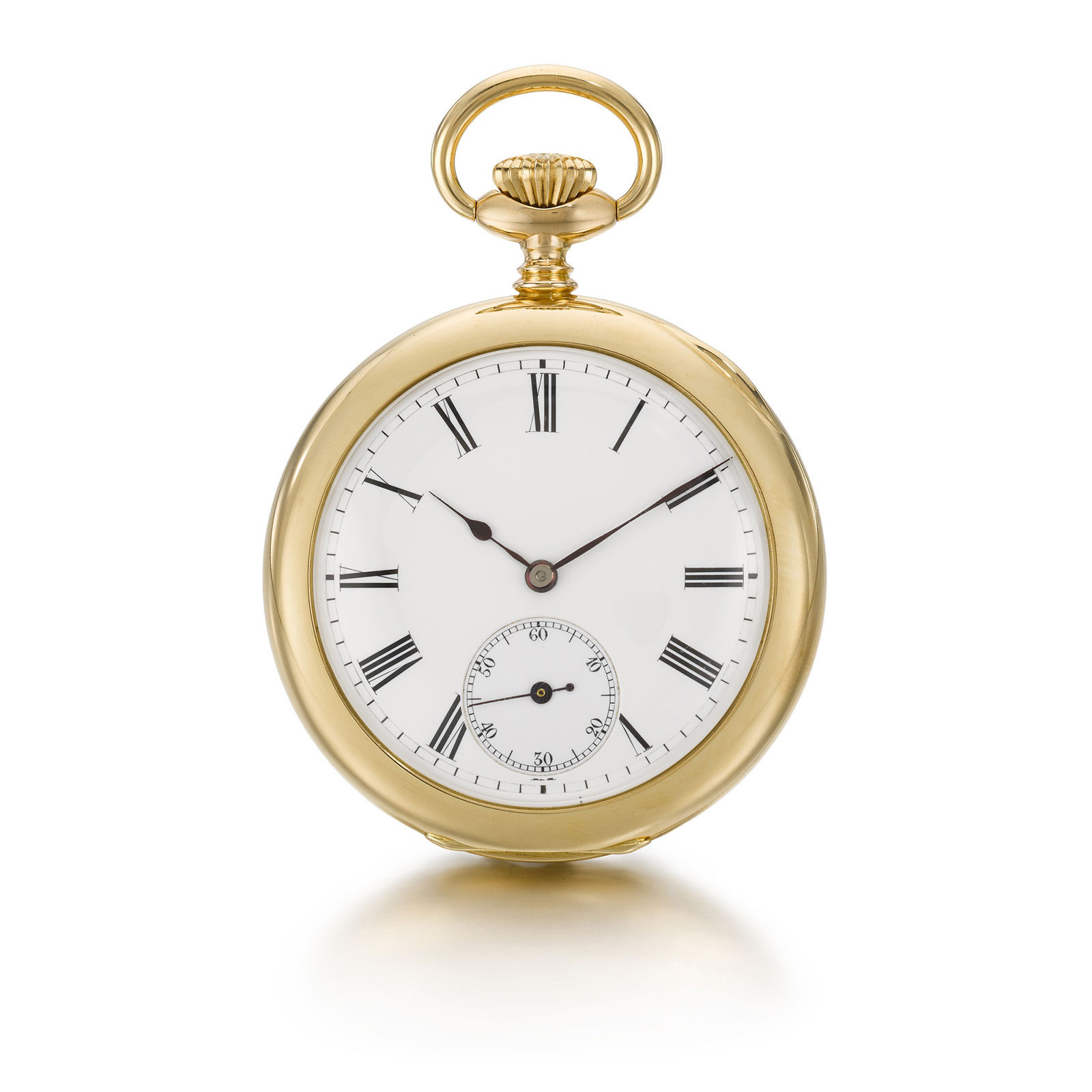 Nerds assemble for a fight

It is a certainty that watch nerds the world over spotted this gem before the sale, and each thought no one else would be nerdy enough to spot it. But as it turns out, everyone who was relevant did see it, and turned up to bid.

The bidding started at 20,000 francs but moved swiftly upwards. Early on there were bids from a Chinese gentleman who’s an associate of Philippe Dufour, and also Patrick Cremers, the manager of the Patek Philippe Salon in Geneva, presumably bidding on behalf of a client. Notably, Francois-Paul Journe was in the saleroom but left just before the sale of the Piguet watch started.

But then a phone bidder, represented by Sam Hines of Sotheby’s, placed a 100,000 franc bid, which wiped out all the other bidders, except for another Chinese gentleman seated in the room who is an auction regular and noted collector of pocket watches.

Though far more expensive watches were sold this week in Geneva, the Piguet resonance pocket watch is probably the ultimate watch nerd timepiece of the season, and for that reason, a good buy despite the record price.