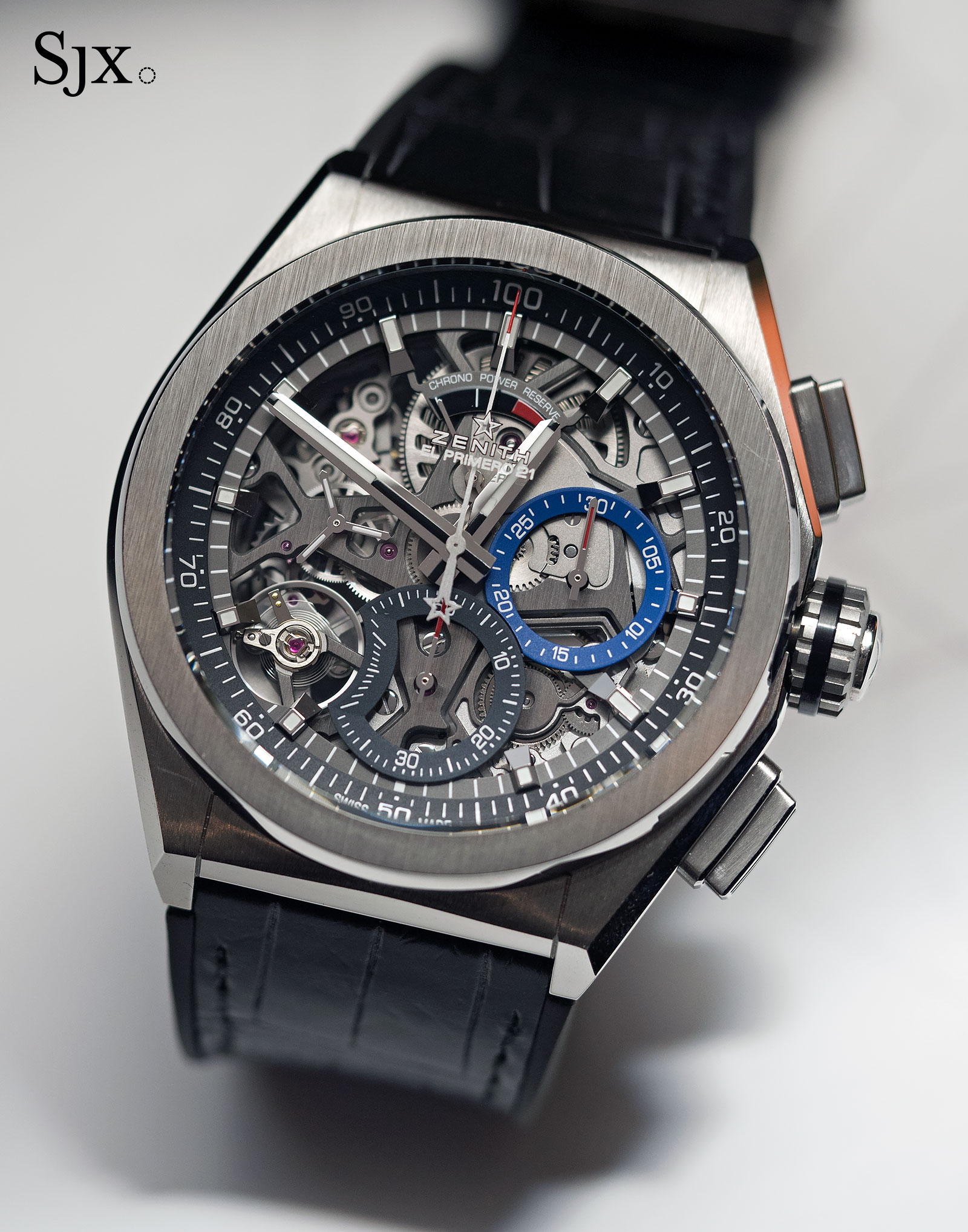 Zenith introduced its El Primero in 1969, becoming one of the first watchmakers to unveil an automatic chronograph. Robust and economical, the El Primero survived the Quartz Crisis and is now regarded as one of the landmark chronograph movements.

In almost 50 years the El Primero has not changed significantly as a chronograph, until Baselworld 2017, when Zenith took the covers off the Defy El Primero 21, powered by the newly developed El Primero 9004 movement. The Defy El Primero 21 in titanium with a skeleton dial

The El Primero 9004 integrates a new layer of complexity into the El Primero, with the addition of a mechanism that counts up to 1/100th of a second.

Large and quite thick – the case measures 44mm in diameter and 14.5mm high – the Defy El Primero 21 has the sort of techy look, especially on the open-dial versions, that is fashionable today. While reminiscent of watches from other brands, the look suits the movement and function, making it a coherent package. On the front the choices are either a skeletonised dial or a silvered, solid dial. The open-dial models are the most appealing, since the open-worked dials reveal the mechanics under. Pressing the start button of the chronograph sets off the central seconds hand whizzing around the dial once per second. One revolution around the dial is made up of 100 infinitesimal steps that the eye cannot discern. Stopping the seconds hand indicates the hundredths of a second that has elapsed.

The counter at six o’clock measures 60 seconds, with every hashmark on its track representing a second. And the register at three records up to 30 minutes. The triple-armed seconds hand at nine o’clock is constant seconds. The key feature of the calibre is its “double chain” construction, featuring two balance wheels, gear trains and mainsprings – one for timekeeping and the other for the chronograph. Such a construction is not new, having been used by Montblanc and TAG Heuer, but it is still challenging technically.

The movement is mostly exposed on the open-dial versions, with lots to see. But that is due to technical features and construction than finishing, which is muted and simple, with lots of sandblasted and straight grained parts.

On the open-dial versions of the Defy El Primero 21, the timekeeping balance wheel is visible at eight o’clock, along with its mainspring at one o’clock. This runs at 36,000 beats per hour, the traditional high frequency of the El Primero.

Wound via the star-shaped rotor on the back, the timekeeping portion of the movement has a conventional 50-hour power reserve. The balance wheel that keeps the time, visible on the front

From the back the second, smaller balance wheel for the 1/100th of a second chronograph is visible. The reduced size and much shorter hairspring are because it runs at 360,000bph, ten times as fast as the regular balance wheel. The star-shaped rotor winds the mainspring for the time

The 360,000bph frequency translates into 100 beats per second, which explains why the central seconds hand blazes around the dial in 100 steps a second. The smaller balance wheel for the chronograph

Because its balance oscillates at such a high frequency, consuming significant energy, and also because space limits the size of the second mainspring, the fraction of second chronograph has a 50-minute power reserve, which seems brief but is actually 300,000 hundredths of a second.

Because the fraction of a second chronograph has its own power source, it is wound separately via the crown; 25 turns gets it to full wind. Both balance wheels are notable for being made of “carbon-matrix carbon nanotube composite”. It’s a composite material injected with carbon nanotubes that’s both light, strong and magnetism resistant, properties ideal for an oscillator, particularly one running at such a high frequency.

Credit where credit is due?

The El Primero 9004 movement inside the Defy El Primero 21 is integrated, meaning the 1/100th of a second mechanism is not a separate module bolted onto the El Primero, a more convenient method of building such a chronograph.

Zenith says the calibre was developed in-house and is distinct from the functionally similar (even the sub-dials are in the same place) movement inside the TAG Heuer Mikrograph.

That being said, Jean-Claude Biver, the chief executive of both TAG Heuer and Zenith, let on in an interview with Swiss newspaper Neue Zürcher Zeitung that the movement was developed by a team comprised of engineers from both brands as well as sister company Hublot.

The first act of defiance

The Defy El Primero 21 will be the first of a new line of watches named “Defy” that resurrects a name Zenith used on and off for sports watches in the latter half of the 20th century. The new line will likely be similarly styled, taking Zenith a road that’s new for the brand but still familiar.

While the design has elements that are recognisable as drawn from other Zenith watches, the angular case, flat bezel and rectangular pushers are reminiscent of Hublot. In fact, the rubber strap covered with alligator hide and accompanying folding clasp are identical to those found on Hublot watches. For what it is, Defy El Primero 21 is surprisingly reasonably priced, with the base model starting at SFr10,900, or about US$11,000. That’s half the price of the TAG Heuer Mikrograph.

Slated to be available starting end-2017, the Defy El Primero 21 is available in three variants, priced as follows (in Swiss francs and Singapore dollars):