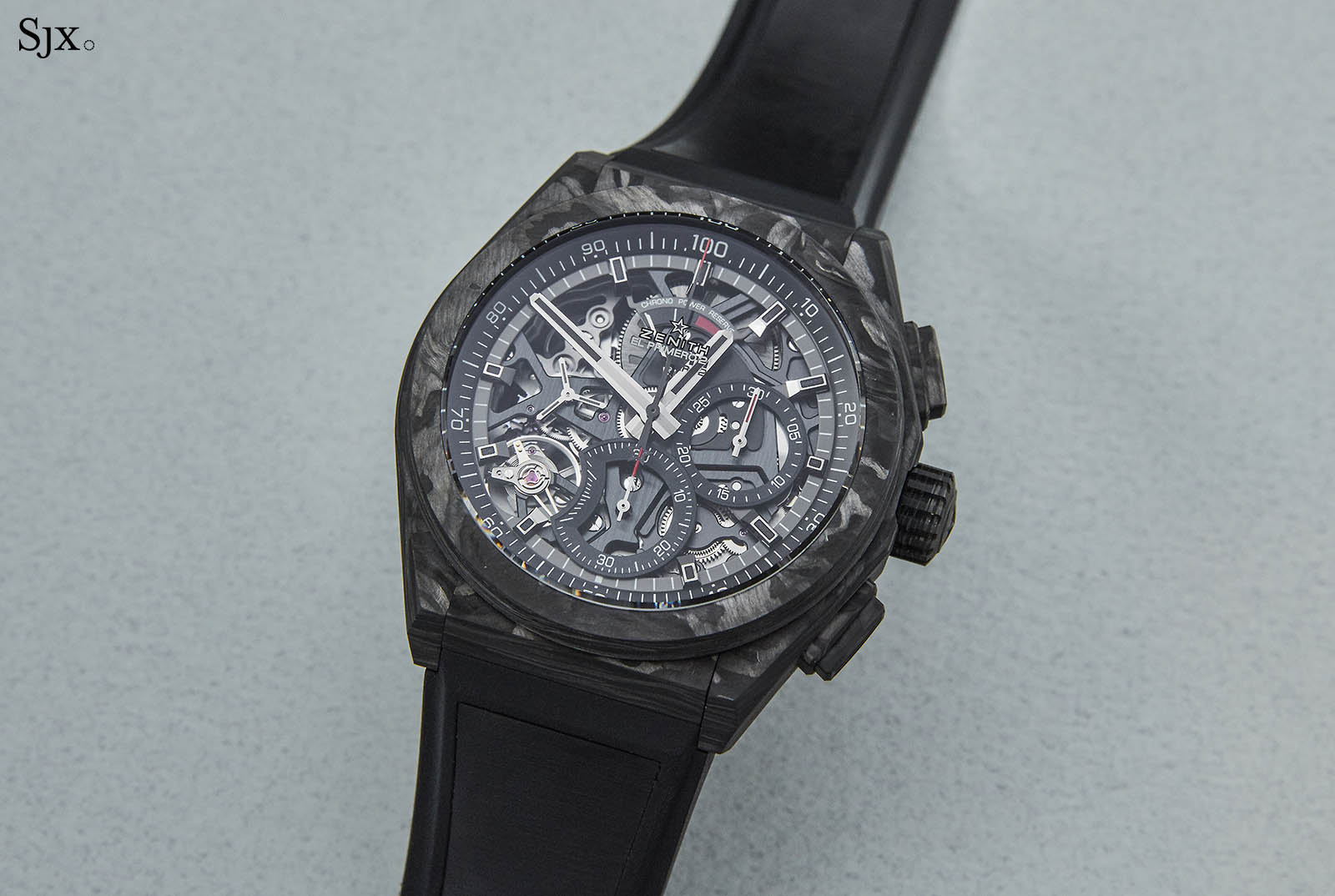 Zenith’s streak of high-tech watches – including this year’s Defy Inventor and El Primero Double Tourbillon – began in 2017, when it unveiled the El Primero Defy 21.

Originally offered only in ceramic, titanium or gold, the high-frequency chronograph is available in a featherweight carbon composite case – arguably best suited to its styling and complication – with the launch of the El Primero Defy 21 Carbon. 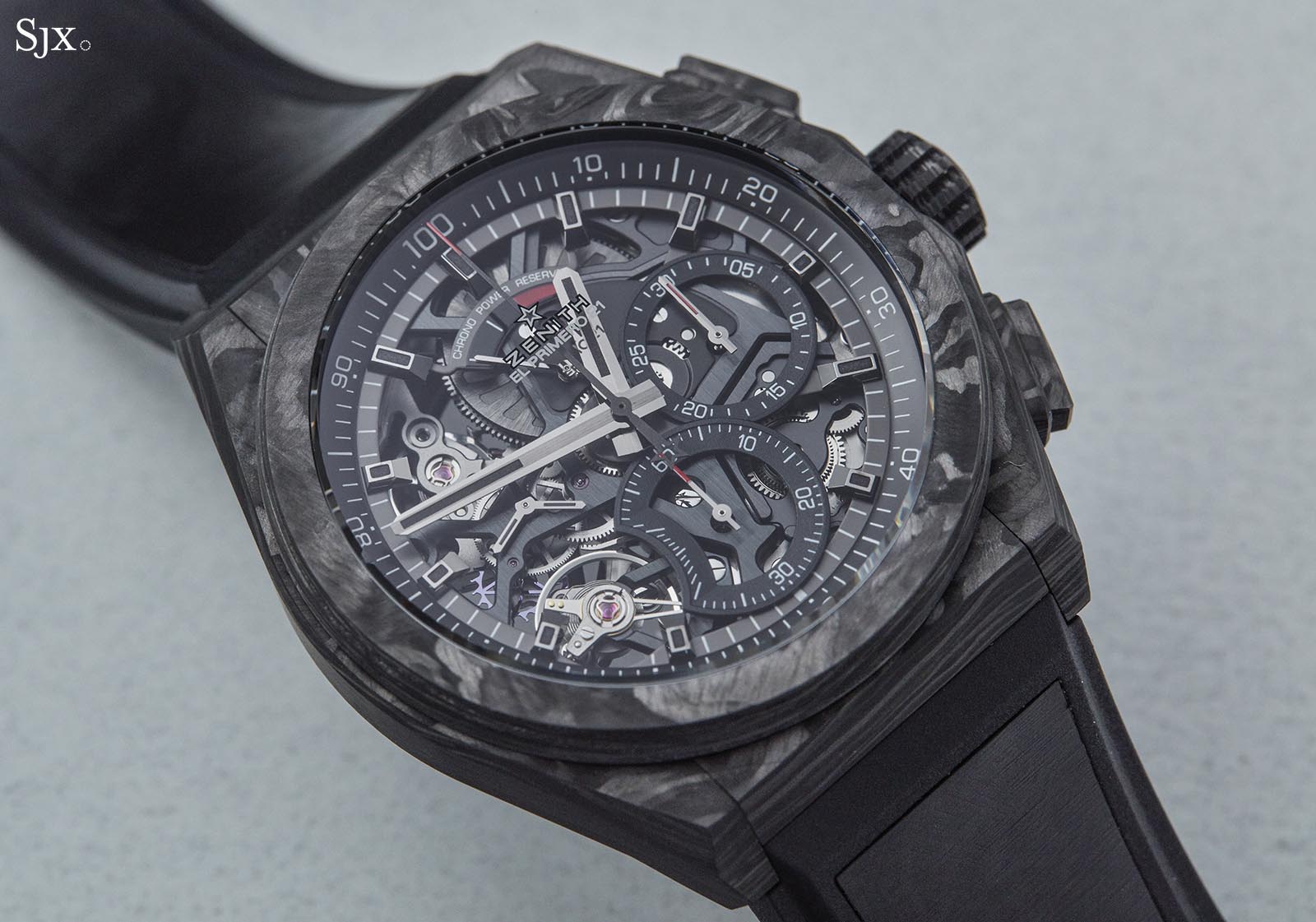 The unusual movement of the Defy 21 is inspired by the similar constructed movement in the TAG Heuer Mikrograph, one of many high-frequency chronographs devised by Guy Sémon, the resident technical guru at TAG Heuer, a sister company of Zenith. Notably, the Mikrograph and the Defy 21 are the only serially produced, 1/100th of a second chronographs on the market today.

Due to the movement’s dual-train architecture – essentially two independent movements on one base plate – the case is a large 44mm in diameter and 14.4mm high. But being carbon composite, it manages to remain lightweight despite the size.

At the same time, the predominantly black colour scheme across the case and dial also makes the watch look smaller than it is, especially compared with versions of the Defy 21 in gold or titanium. 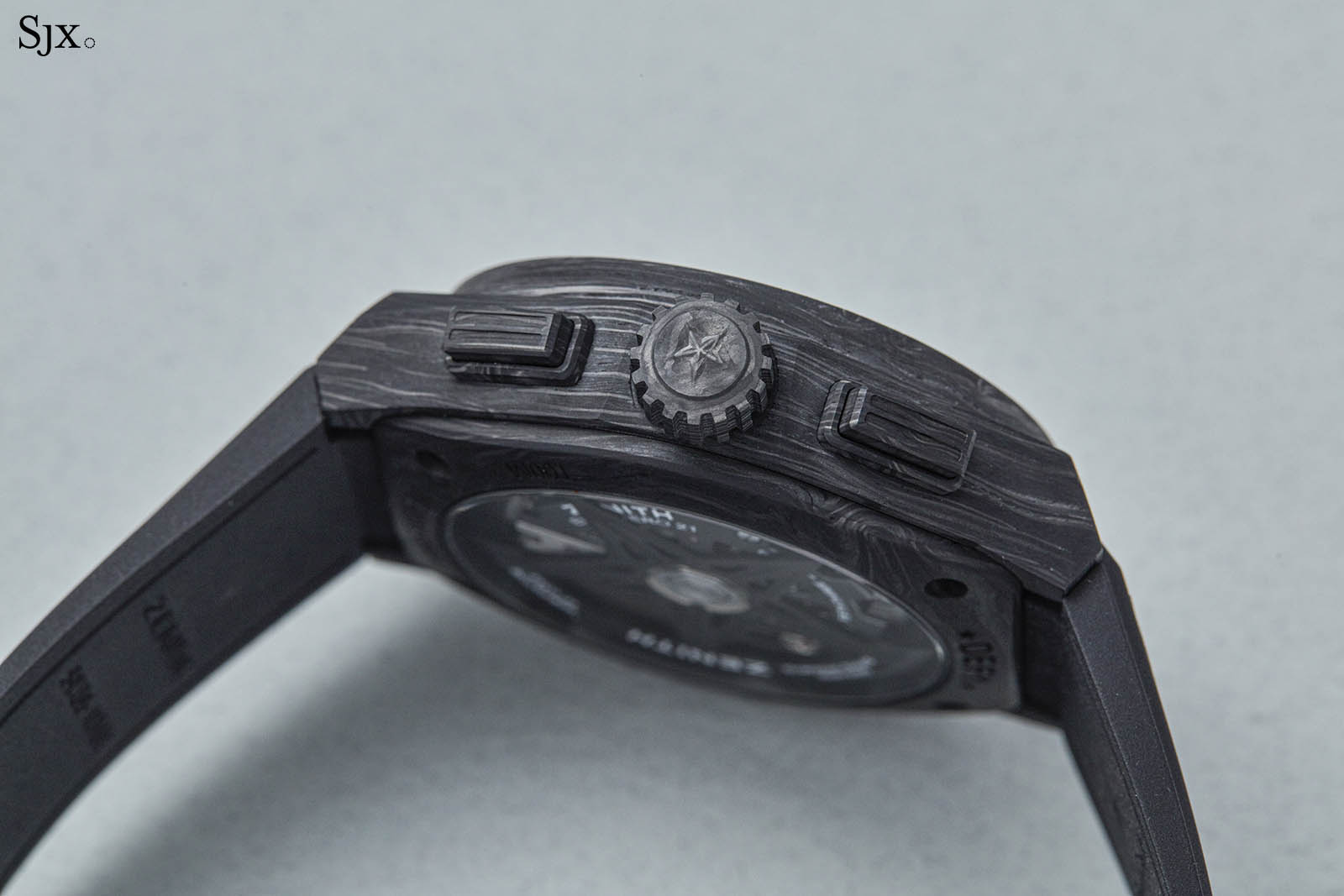 Visually, the case is typical of the material, which is made up of carbon fibre threads randomly arranged inside a polymer, creating the distinctive marbled appearance. The angular case design is matched with a skeletonised dial, a common combination that is in vogue today. 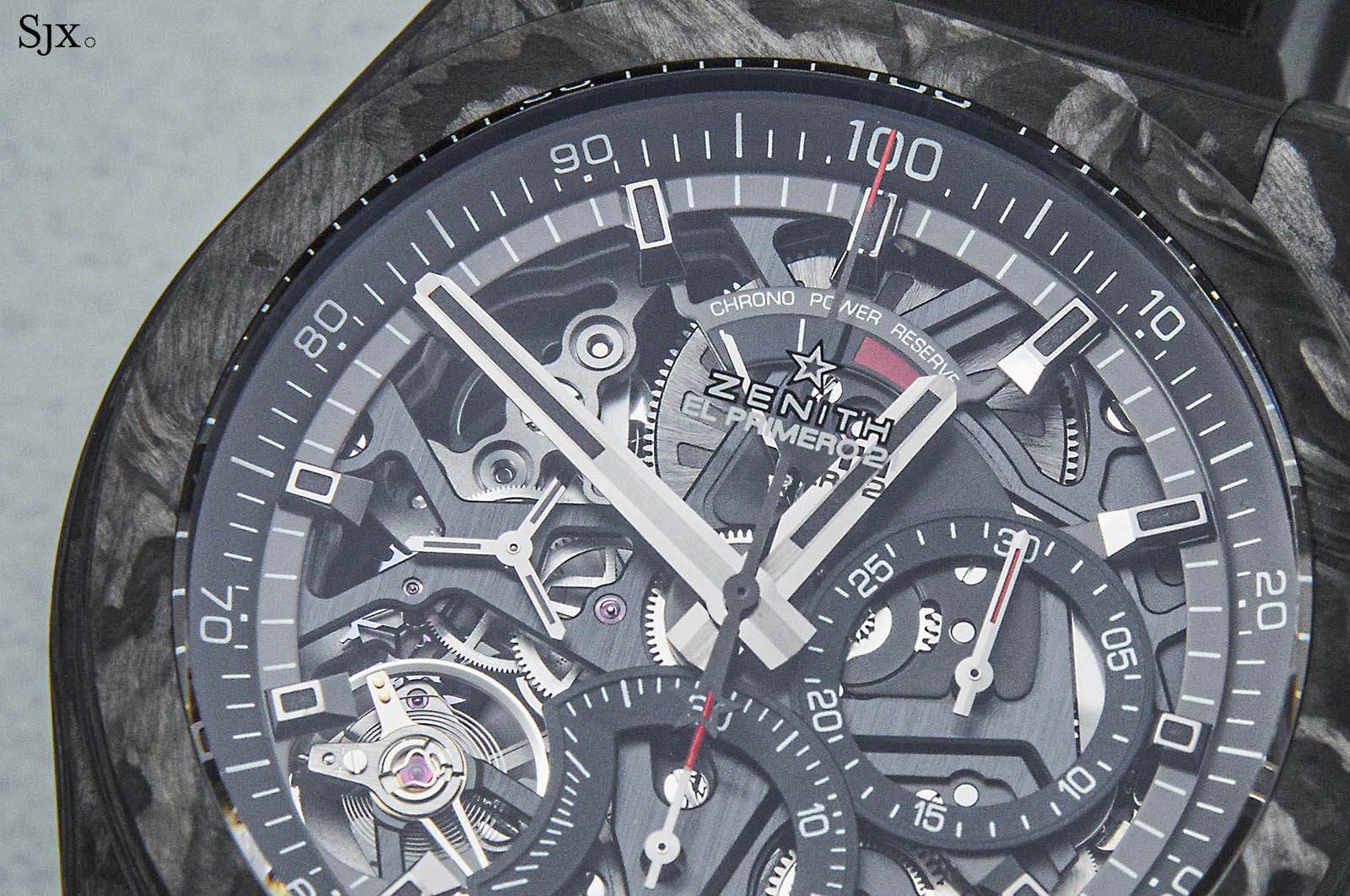 The chronograph registers sit at three and six o’clock, while the power reserve indicator for the chronograph barrel is at 12. Despite its complexity, the dial remains legible as it is composed of different layers and shades of black, allowing the various indications to be easily distinguished, at least in daytime.

Overall, the look is a common one, shared by brands ranging from Richard Mille to TAG Heuer. But the Defy 21 is more than just a sporty design; it is intriguing because the movement is genuinely inventive and also technically interesting. And most importantly, the Defy 21 is also reasonably priced as such watches go, making it by far one of the most compelling buys in the segment of high frequency chronographs. 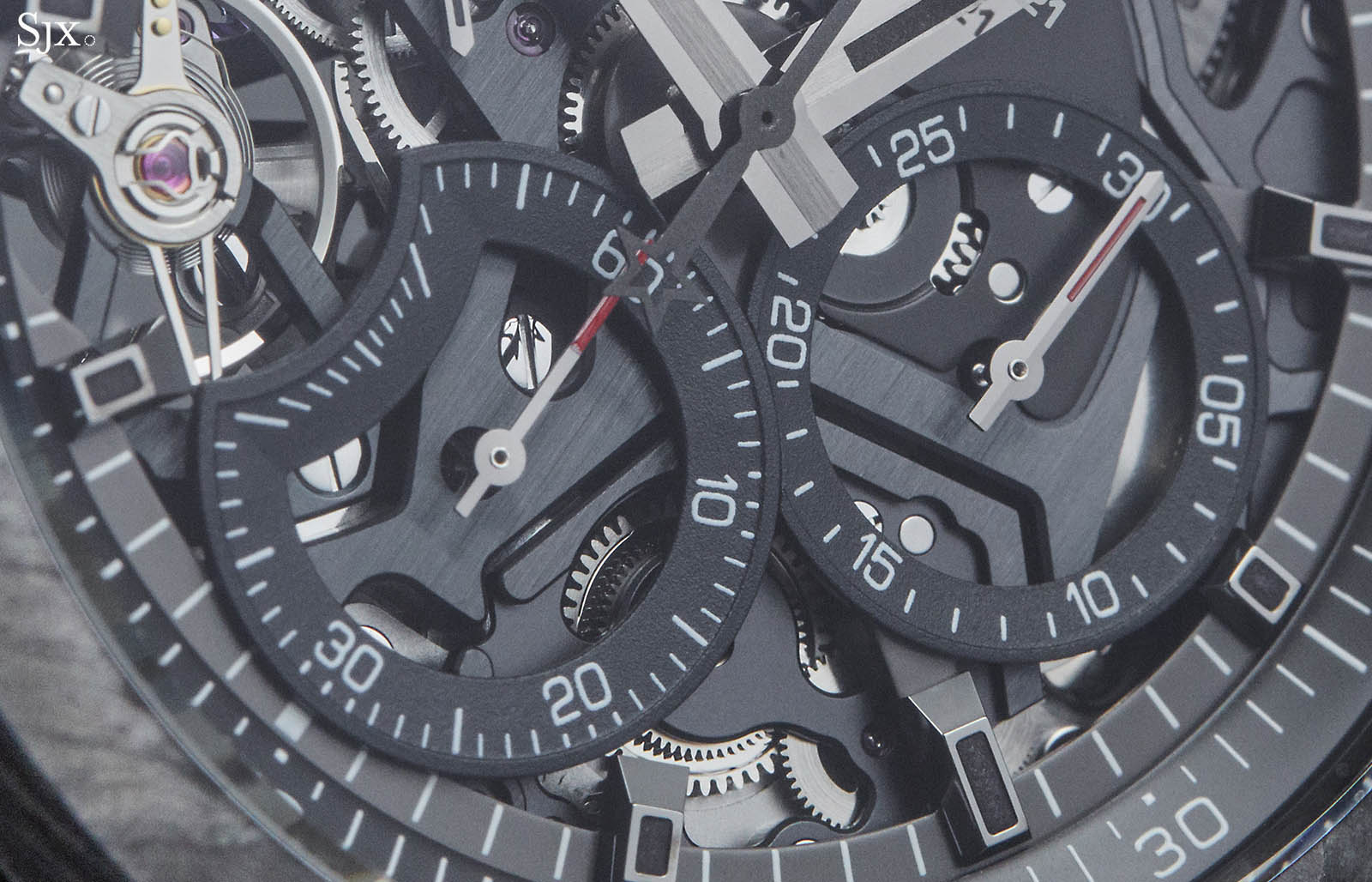 But more than the design and the materials, the Defy 21 is all about the movement, and the challenges that have to be overcome in order to achieve the chronograph frequency of 50Hz, or 360,000 beats per hour.

While a higher frequency chronograph results in greater resolution, the laws of physics dictate the drawback increase with the frequency. For instance, starting and stopping the chronograph causes energy supplied to the the timekeeping balance wheel to fluctuate, which impacts its amplitude, which in turn impacts rate.

In addition, the higher the frequency, the more impulses and rotations of the escape wheel and gear train occur per period of time . Hence, more power is needed to keep the escapement going, and the friction generated by the rapid motion of the escapement in turn requires more frequent servicing. 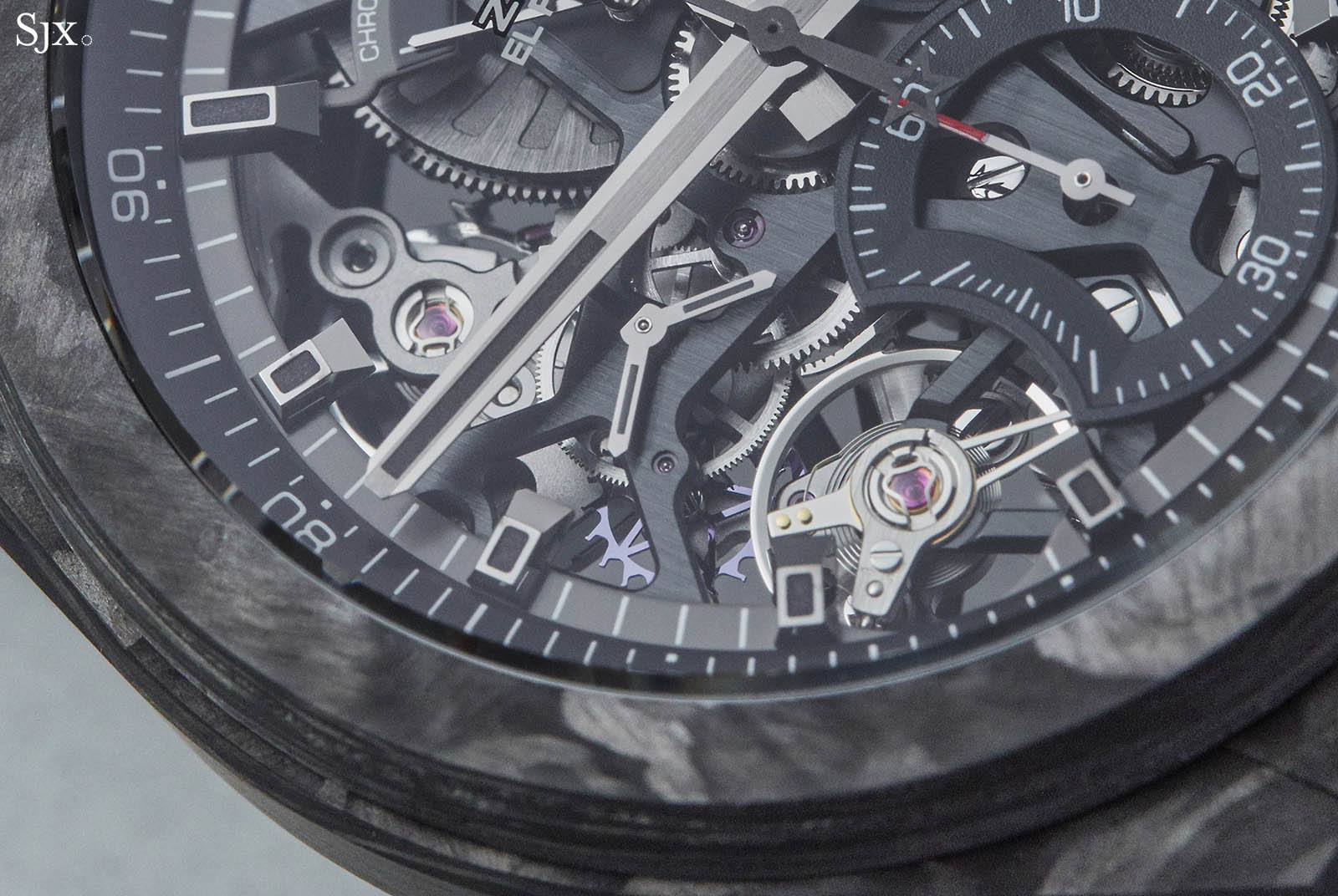 To solve this, the El Primero 9004 movement inside the Defy 21 has two independent sets of mainsprings, gear trains and escapements – in essence, two independent movements – isolating the high frequency escapement so that the activation of the chronograph doesn’t affect timekeeping. 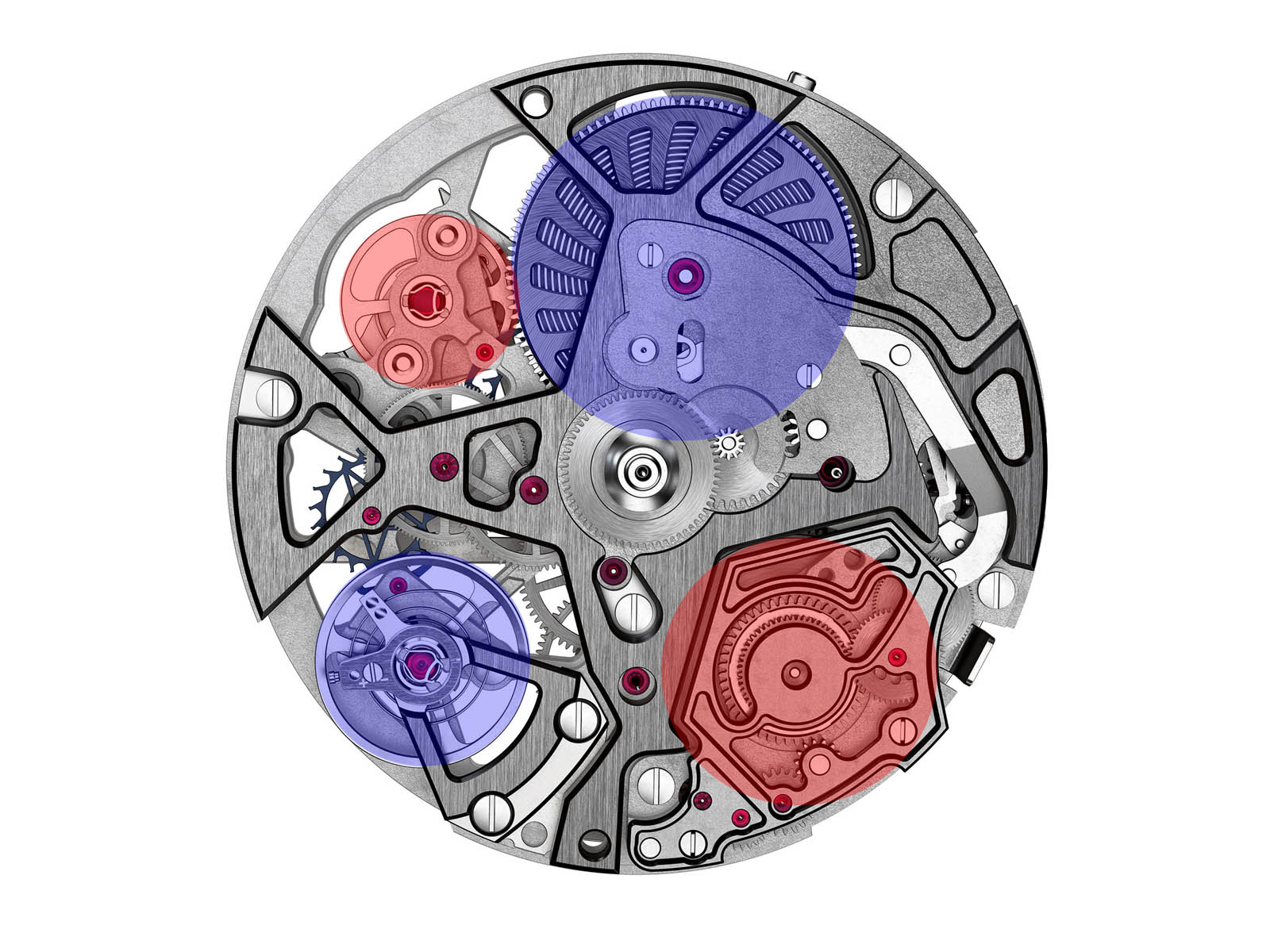 The independent movements inside the Defy 21: the mainspring and balance for the chronograph in red, while that for timekeeping in purple

Similar twin-train constructions can be found in watches like the Jaeger-LeCoultre Duometre a Chronographe and the Breguet Tradition Chronographe 7077, each with its own unique solutions to isolate the chronograph and ensure a stable rate.

The Defy 21, in comparison, has a more straightforward and robust solution that allows it to operate at a much higher frequency. The timekeeping escapement runs at the commonplace frequency of 5Hz, while the second chronograph escapement, which starts only when the chronograph is activated, operates at 50Hz, allowing the stopwatch to measure up to 1/100th of a second, at least on paper, since user error will far exceed its smallest unit of measurement. 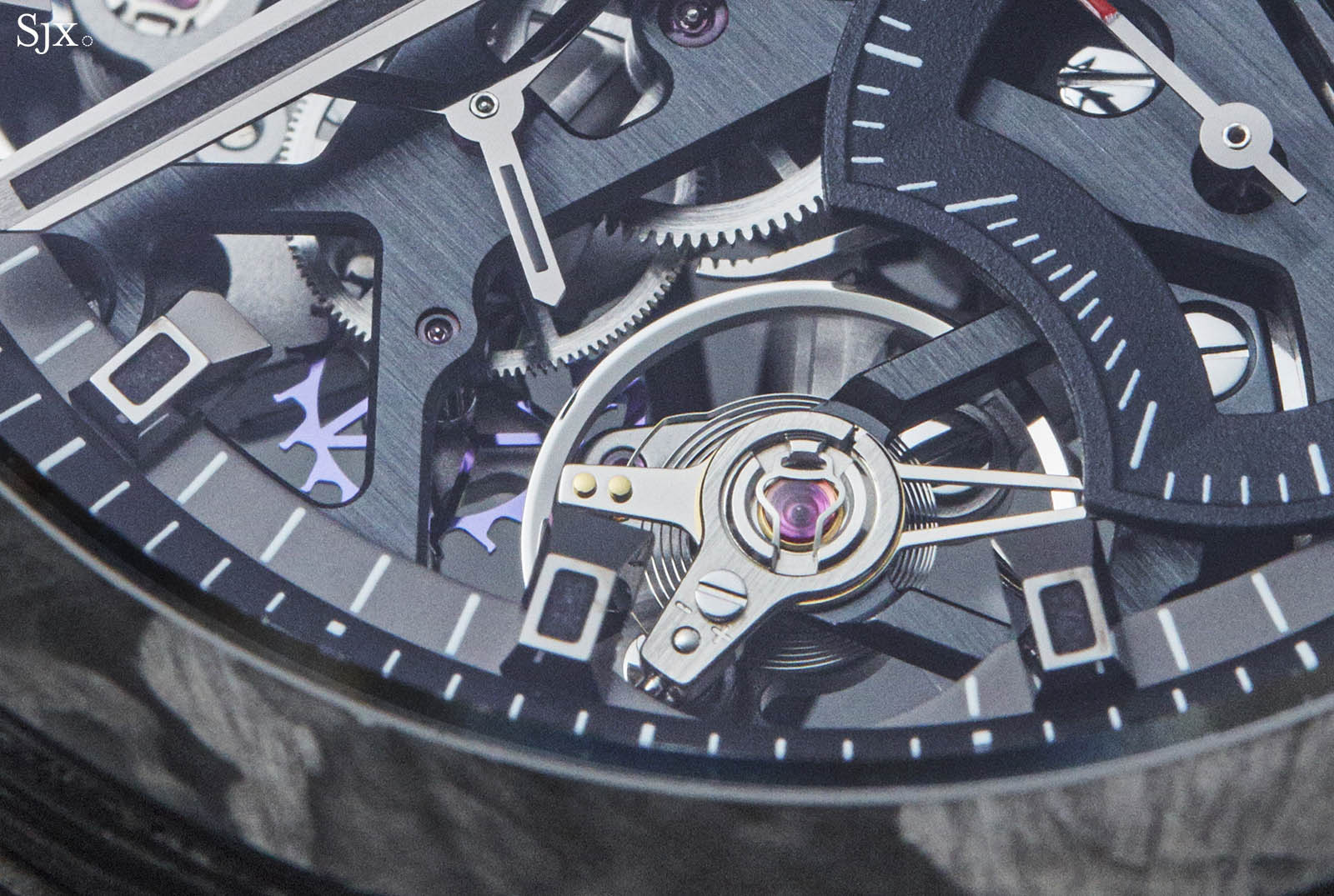 The larger balance wheel for timekeeping

The pallet fork and escape wheel, which is the fastest rotating wheel in the transmission system, are both silicon, a material that operates without friction and requires little energy, being less than a third the density of steel. Thus, it reduces inertia and wear, which is particularly crucial in a high frequency movement. 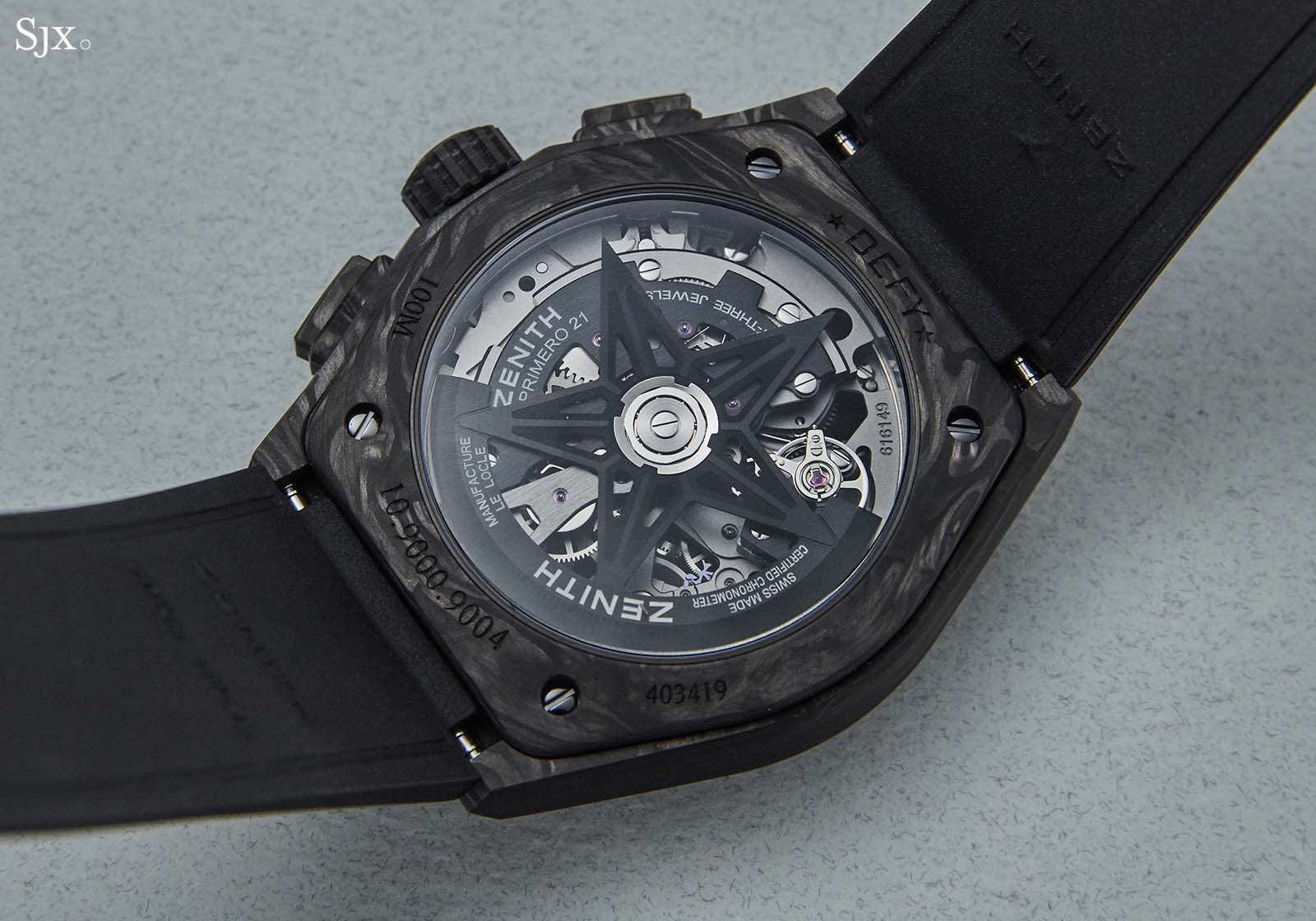 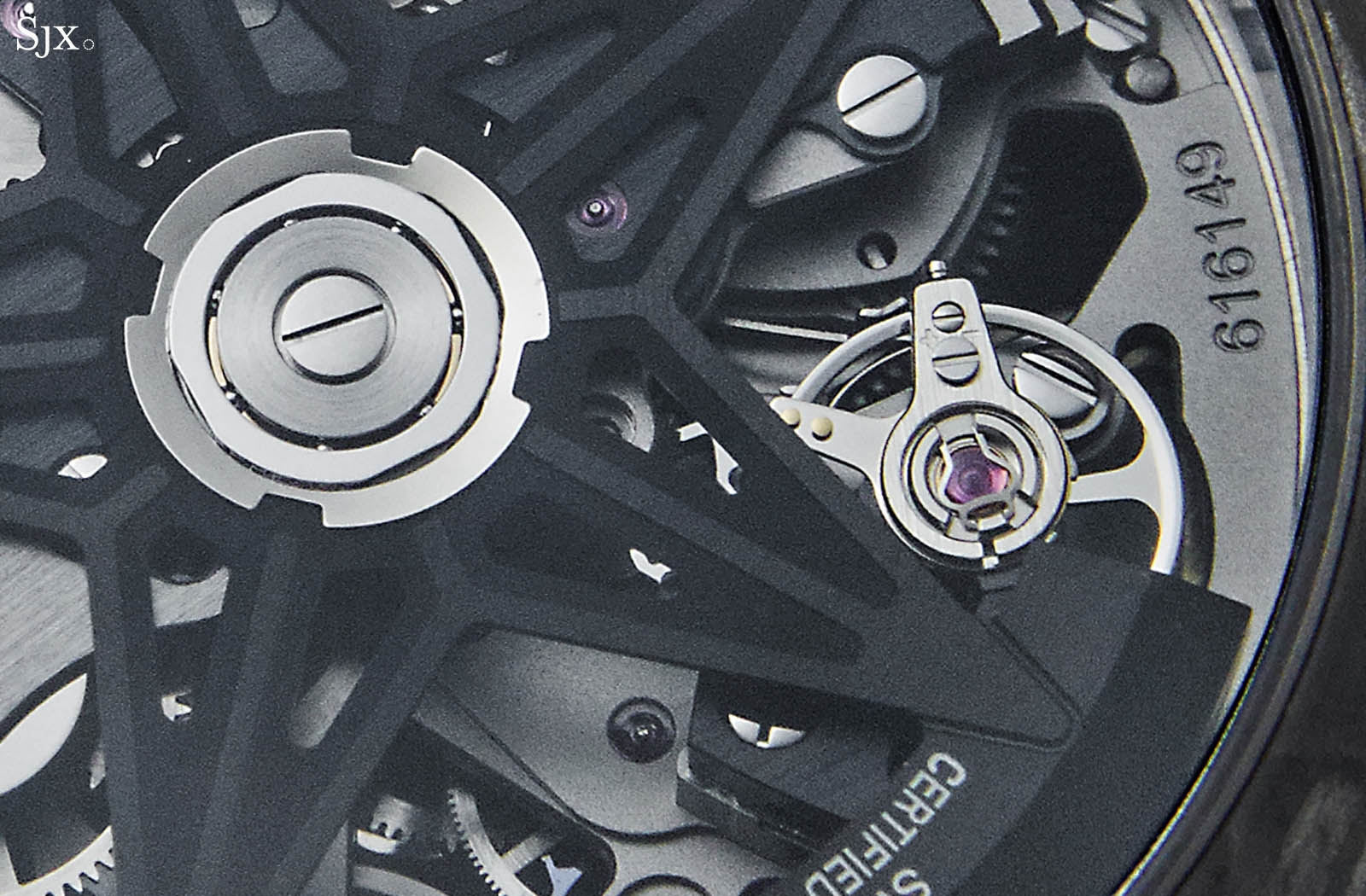 To enable such rapid oscillation, the balance wheel for the chronograph, which is visible through the case back, has been reduced in size and fitted to a much shorter hairspring. The balance staff is fitted with KIF shock absorbers both on the front and back to prevent it from breaking when subjected to hard knocks.

A higher frequency in turn also means that the chronograph mainspring unwinds quicker. Thus, even though the barrel for the chronograph is almost as large as that for timekeeping, it only contains a 50-minute power reserve, as compared to the 50 hours for the timekeeping system.

And because both barrels are independent, they are also wound separately. The timekeeping mainspring can be wound manually by turning the crown counterclockwise and also via the rotor, but the chronograph mainspring can only be manually wound via the crown. 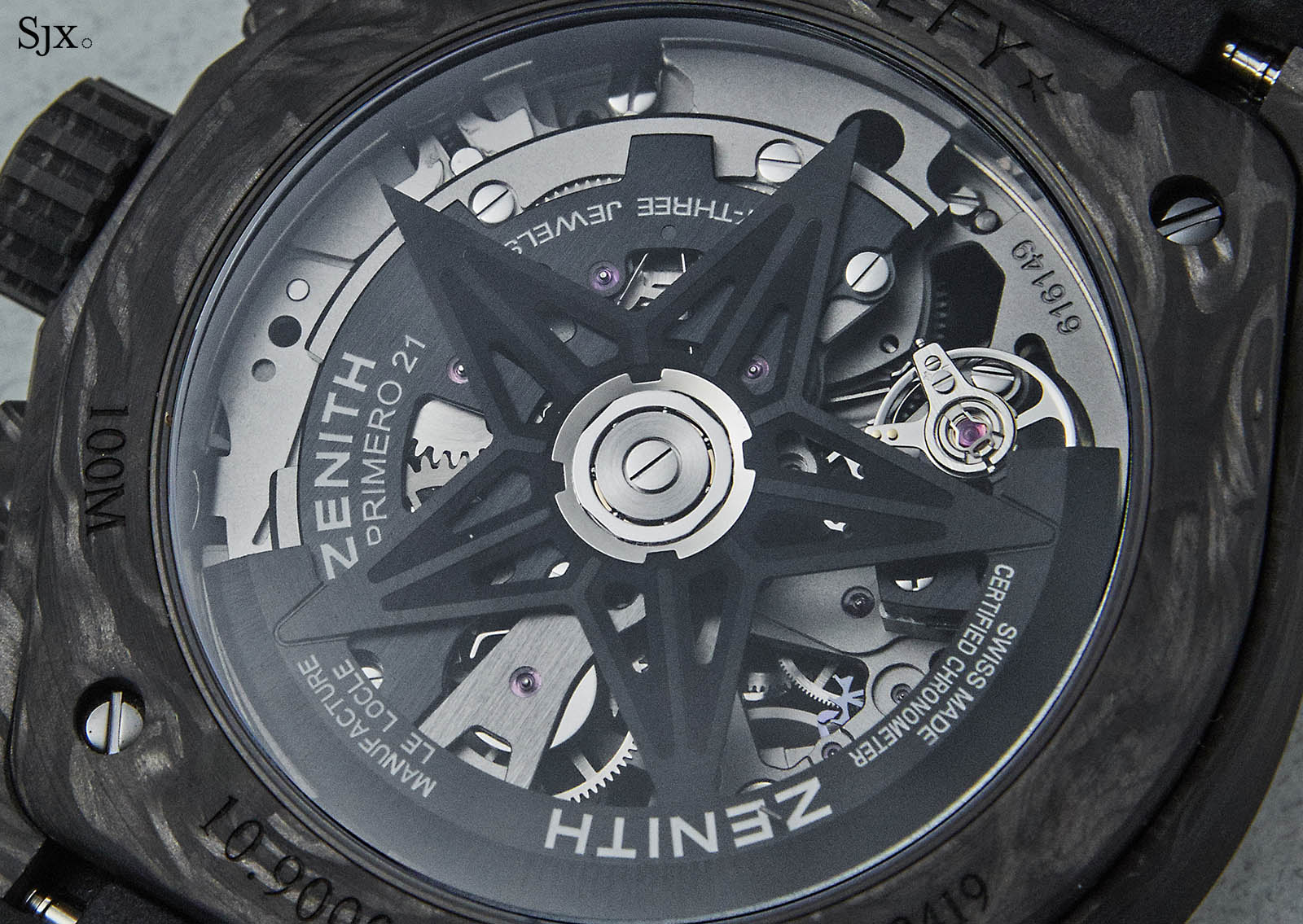 To match the case and design, the bridges of the movement are blackened and brushed, while the rotor is open-worked into the Zenith star logo. The finishing of the movement both on the front and back is mechanical but clean, and more importantly, appropriate for the graphic style of the watch.

The Defy 21, regardless of its iteration, is a tremendous feat – especially for what it costs, starting at just over US$10,000 for the entry-level model in titanium.

However, at US$17,800, the El Primero 21 Carbon costs almost 60% more than the version in titanium, a material that surpasses carbon in strength and rivals it in weight.

The difference between the two is purely aesthetic. In the grand scheme of what the watch is all about – which is its incredible mechanics – styling is almost negligible.

That being said, other high frequency chronographs are even more expensive, or do not quite measure up.

Comparable watches include the Montblanc Timewalker 1000, which was a limited edition and priced higher, and also the F.P. Journe Centigraphe, which is technically not a true 1/100th chronograph as it relies on a traditional 3Hz escapement and a decoupling mechanism. And there’s also the TAG Heuer Carrera Mikrograph, which is comparably priced but slightly inferior in specs. The Defy 21 is, in short, a value proposition.