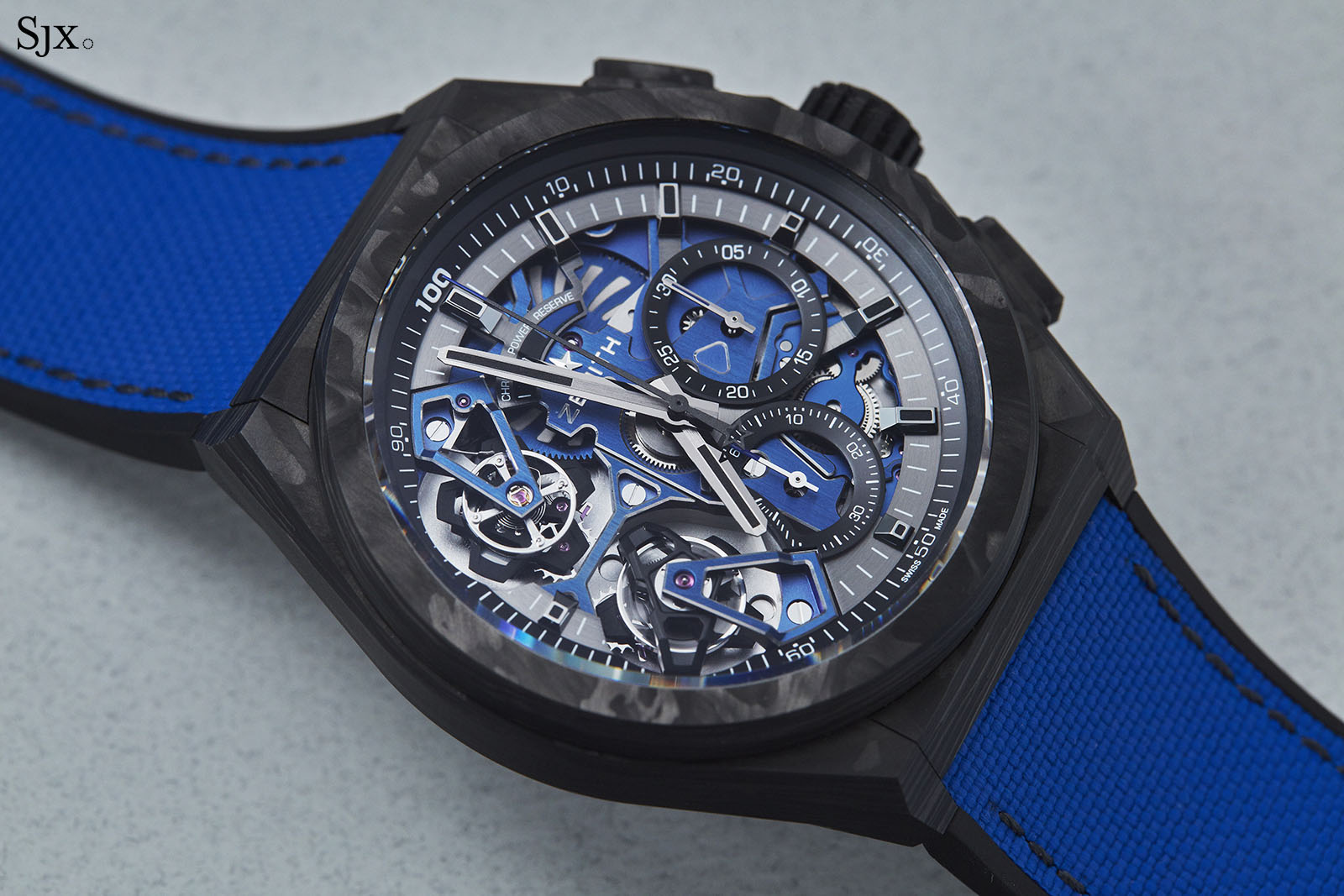 When Zenith unveiled the El Primero Defy 21 two years ago, it was a breakthrough for the brand, offering a 1/100th of a second chronograph with twin regulators for an affordable US$10,000 or so.

This year the brand has kicked things up a notch with the El Primero Defy Double tourbillon, which essentially replaces the regular escapements with two tourbillons – one conventional and the other ultra-fast.

The new double tourbillon chronograph is a logical evolution of the classic El Primero – albeit accomplished with some help from TAG Heuer – that remained unchanged for decades. Unveiled 50 years ago, the El Primero was the first integrated automatic chronograph, and crucially, the first serially-produced, high-frequency chronograph running at 36,000 beats per hour (bph), allowing it to measure time down to the nearest tenth of a second.

It would take 48 years for it to evolve into its first major iteration, the El Primero Defy 21 of 2017, which took the high-precision chronograph to its extreme with a monstrously high frequency of 50Hz, capable of measuring time down to a hundredth of a second. 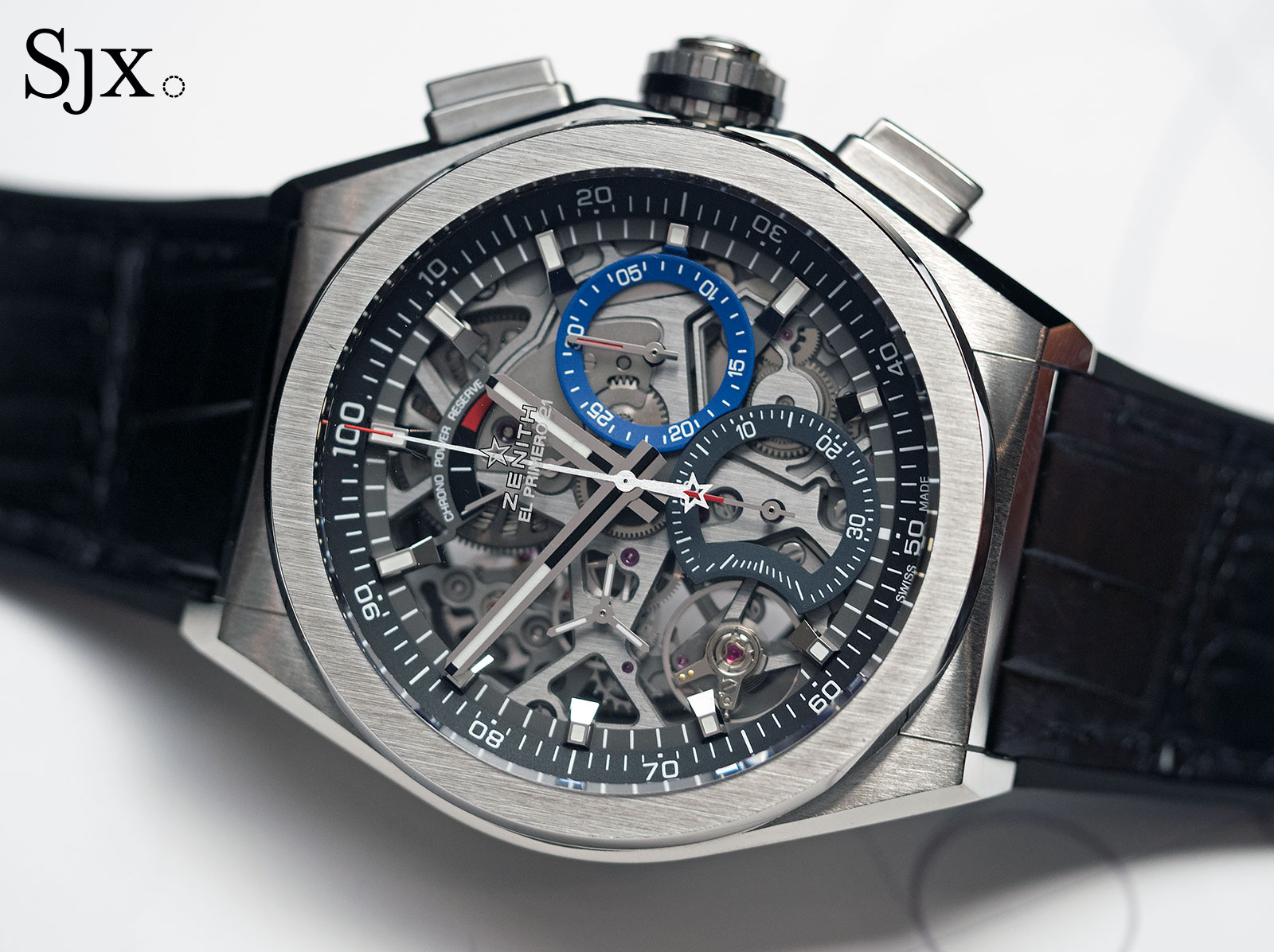 While it is true that a higher frequency regulator results in a higher resolution chronograph, it comes at a cost. An ultra-high frequency escapement requires tremendous energy, and the friction generated by the rapid motion of its components in turn mean more frequent servicing. 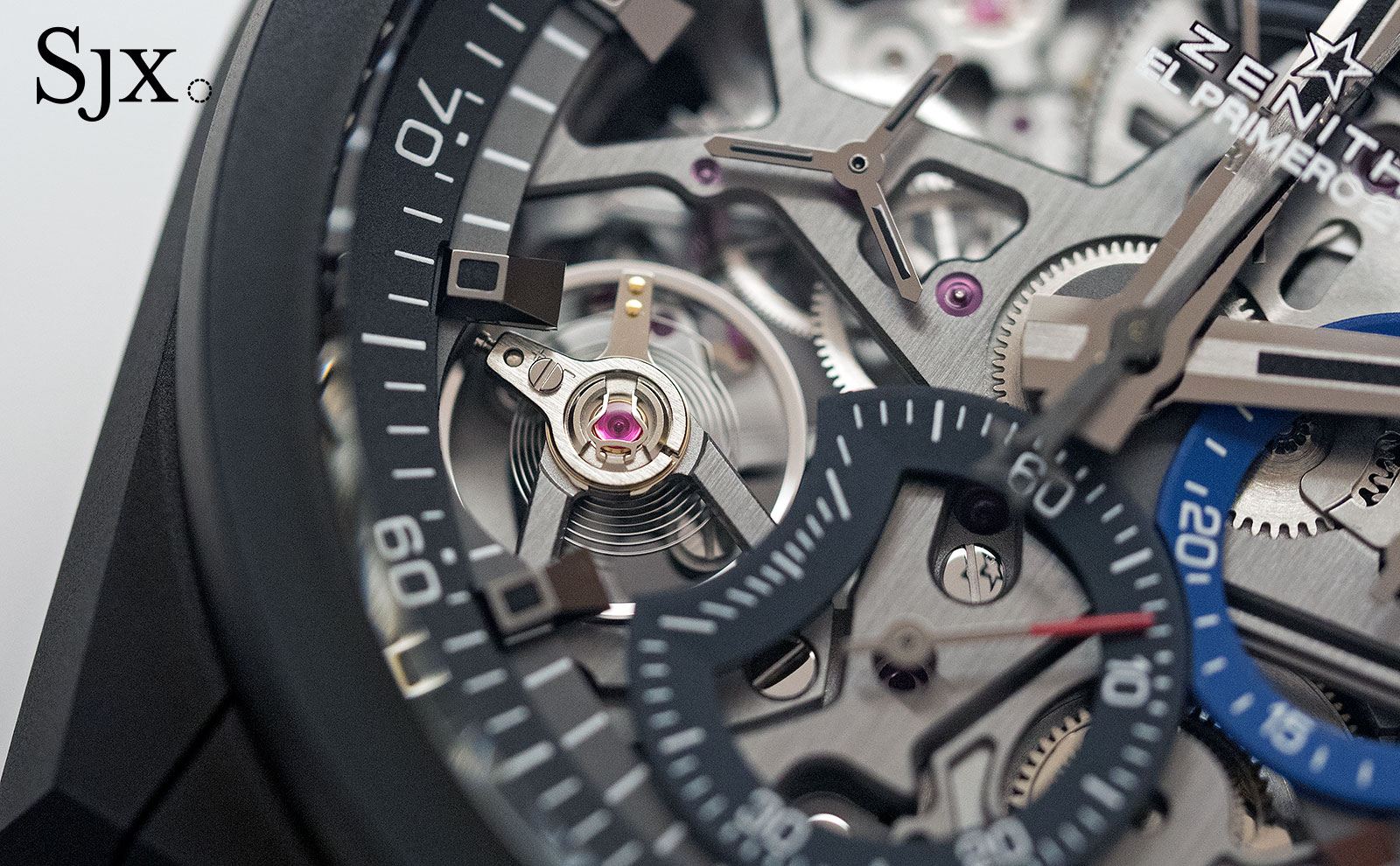 The timekeeping balance wheel of the Defy El Primero 21, visible on the dial

So the El Primero Defy 21 was designed with two separate set of mainsprings, gear trains and escapements, so that the activation of the chronograph doesn’t affect timekeeping, and the high frequency escapement, which is a drain on power, is mechanically isolated.

The new Defy El Primero Double Tourbillon relies on that same architecture, but takes it to a new level of complexity by installing tourbillon regulators in place of the balance wheels.

The Double Tourbillon is powered by the self-winding El Primero 9020 that has the timekeeping tourbillon making one rotation a minute containing a balance beating at a 5Hz, while the tourbillon for the chronograph makes 12 frenzied rotations per minute and its balance wheel oscillates at 50Hz, making it one of the fastest-rotating tourbillons ever. 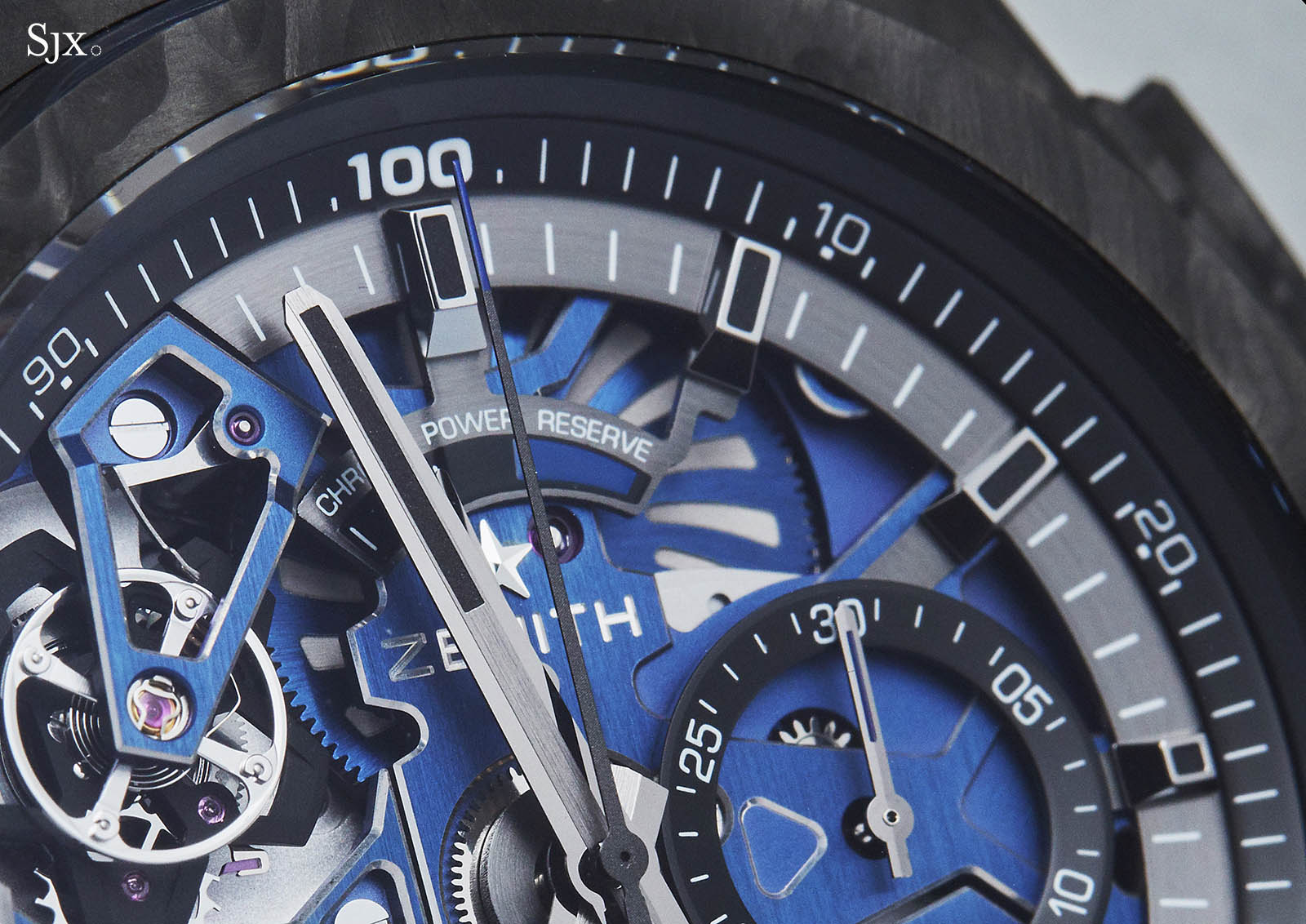 Zenith is, of course, not the first brand to create a wristwatch with a 1/100th of a second chronograph – that honour belongs to TAG Heuer, a sister company in the LVMH watch division.

In fact, the movement is a variant of the TAG Heuer Carrera MikrotourbillonS of 2012, which was hand-wound but had a similar movement set-up: a 4Hz tourbillon regulator for timekeeping, and for the chronograph, a 50Hz tourbillon rotating 12 times per minute. To achieve its high frequency, a smaller balance and hairspring were used, and the tourbillon cage was removed – the balance sat on a rotating platform instead.

As a side note, the dual regulator construction was one that TAG Heuer honed over several models and several years, culminating in 2014 with the Carrera Mikropendulum Tourbillon that cost US$400,000 – but the watch was killed once Jean-Claude Biver took over as chief executive of the brand.

The Defy Double Tourbillon uses a similar approach, but at a more accessible price.

The high-frequency tourbillon located at ten o’clock lacks an upper cage – instead it sits on a star-shaped platform – while the balance and hairspring were also reduced in size. And because the balance staff has a smaller, more fragile pivot, it is fitted with a KIF shock absorber which prevents it from breaking when subject to hard knocks. 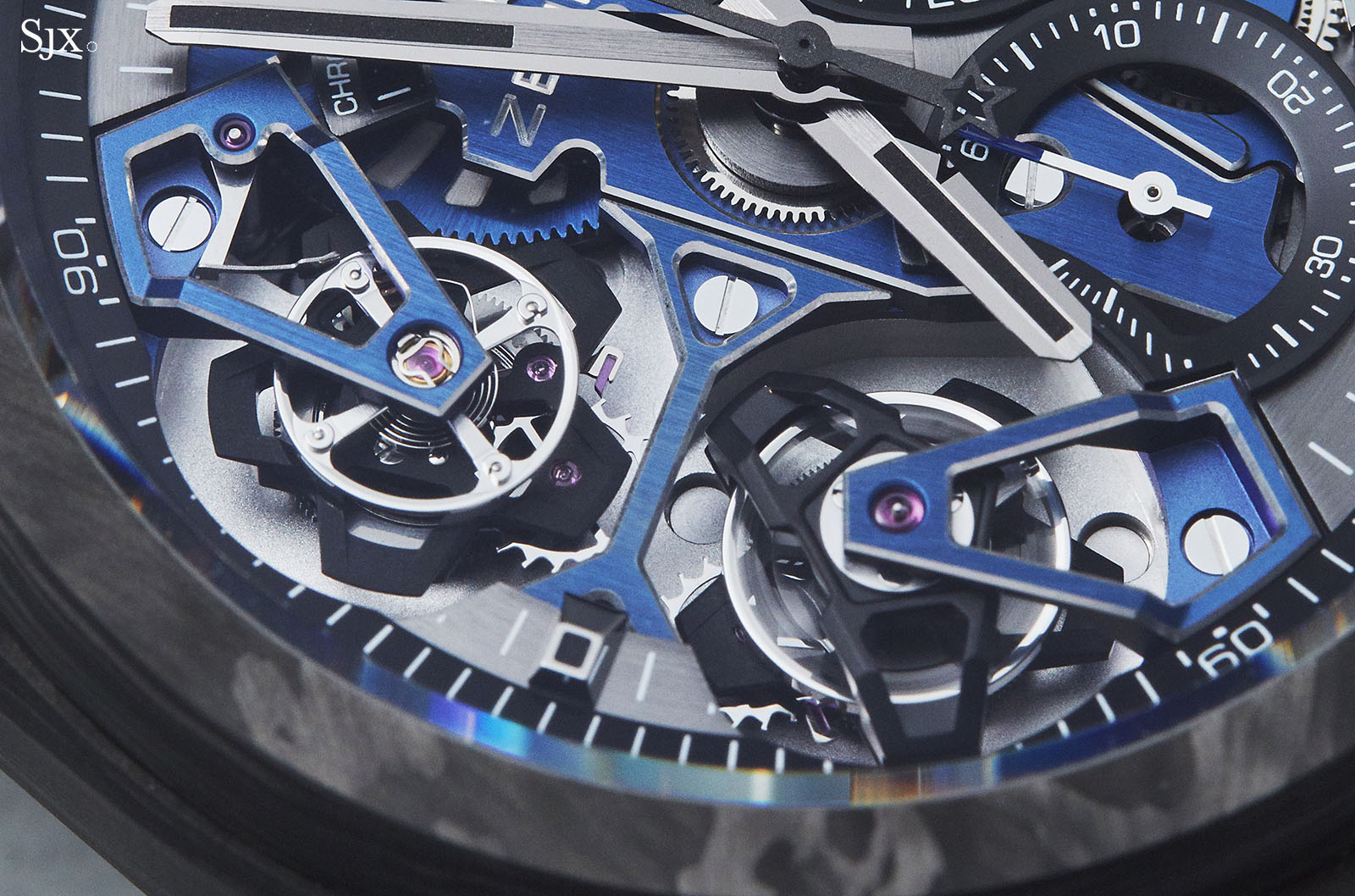 However, the movement feels technologically incomplete in a sense for both regulators here are made from conventional materials, which is slightly odd as the less complex Defy 21 features silicon escape wheels.

Modern materials such as silicon can be fabricated more precisely and aid in reducing inertia, friction and wear, which is even more crucial in a high frequency movement, making their absence here notable. 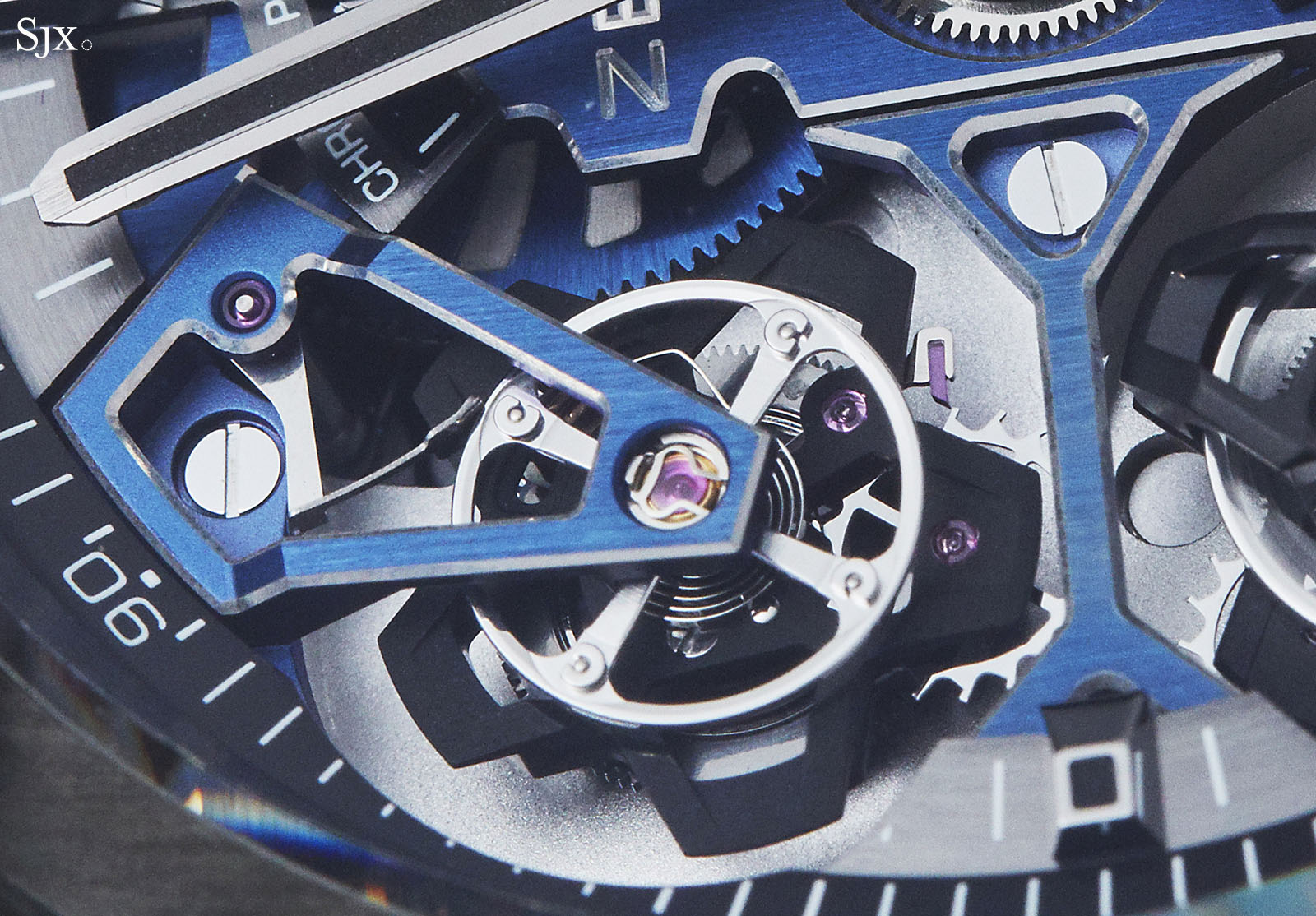 A closeup of the high speed tourbillon

As a result of the elaborate construction – essentially two movements in one watch – the case is a massive 46mm wide. The example pictured is carbon composite, which keeps the watch lightweight despite its size. But for those with stronger wrists and fuller wallets, it is also available in platinum.

As a result of the carbon case the watch is easy to wear, although the integrated strap and folding clasp means the strap has to be the correct length in order for it to sit properly on the wrist. And it also has to be said, the feel on the wrist is reminiscent of other large, lightweight sports chronographs. 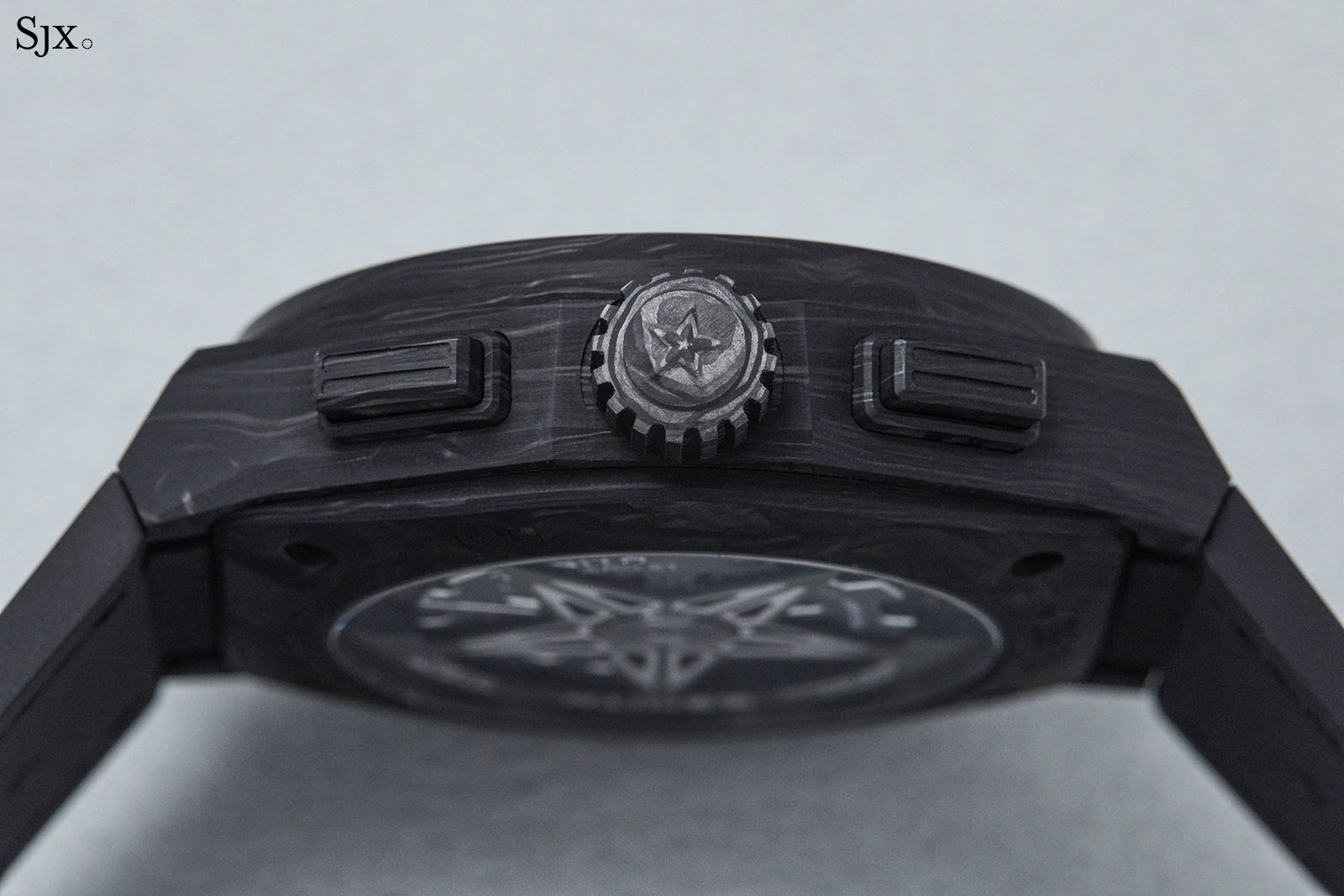 In keeping with the overarching style for the Defy line, the Double Tourbillon pushes the limits of the El Primero not just mechanically but also aesthetically. The watch features an angular, ultra-contemporary case design paired with an open-worked dial with contrasting blue anodised bridges. The look is a popular one now, and can be found on other watches, but is an attractive one especially when combined with a highly technical movement, so that it’s not all show and no go. Located at three o’clock is the 30-minute totaliser and at six o’clock the 60-second counter, while the power reserve indicator for the chronograph is at 12 o’clock. All the indications are surprisingly easy to read despite everything that’s going on within the dial. 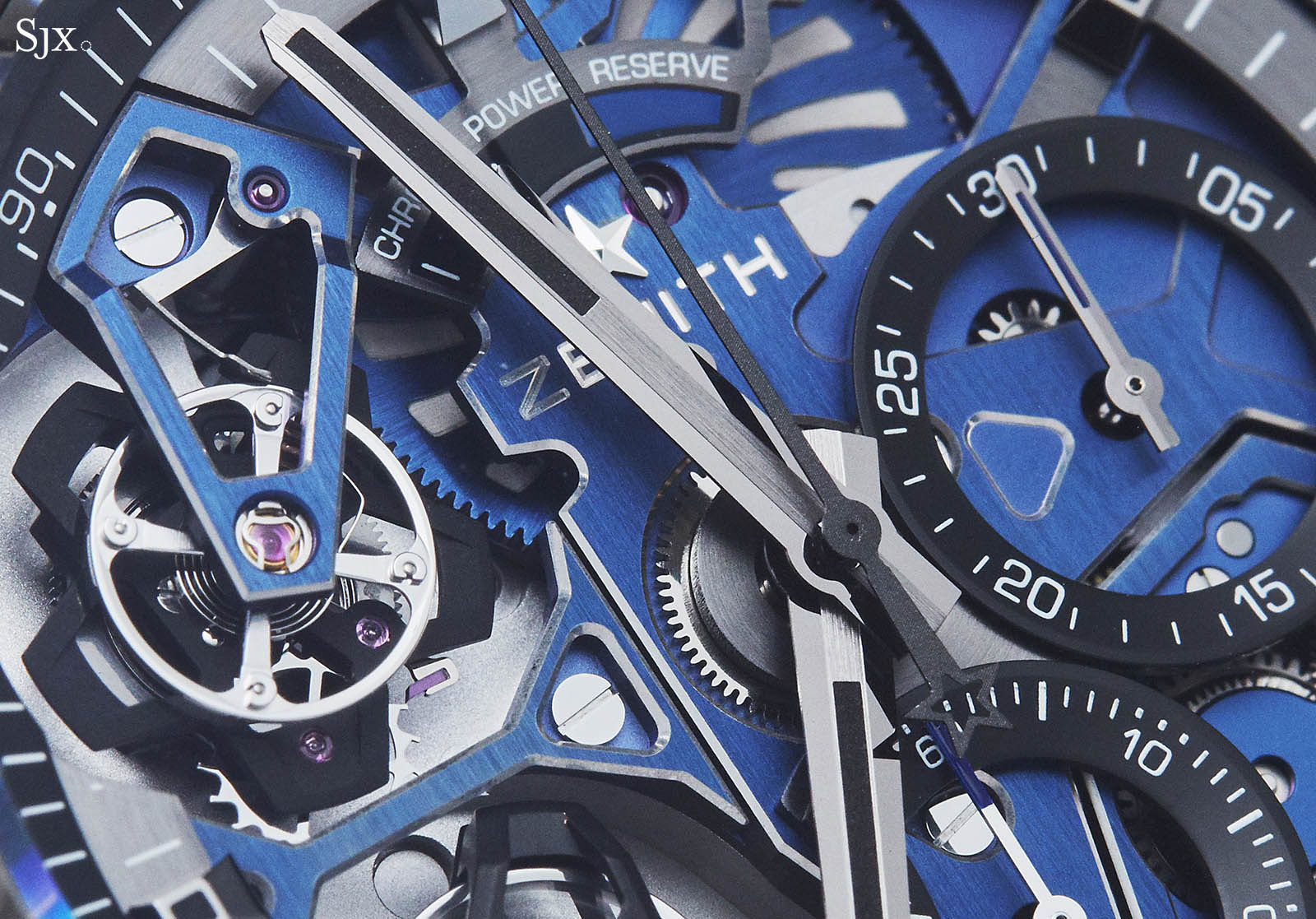 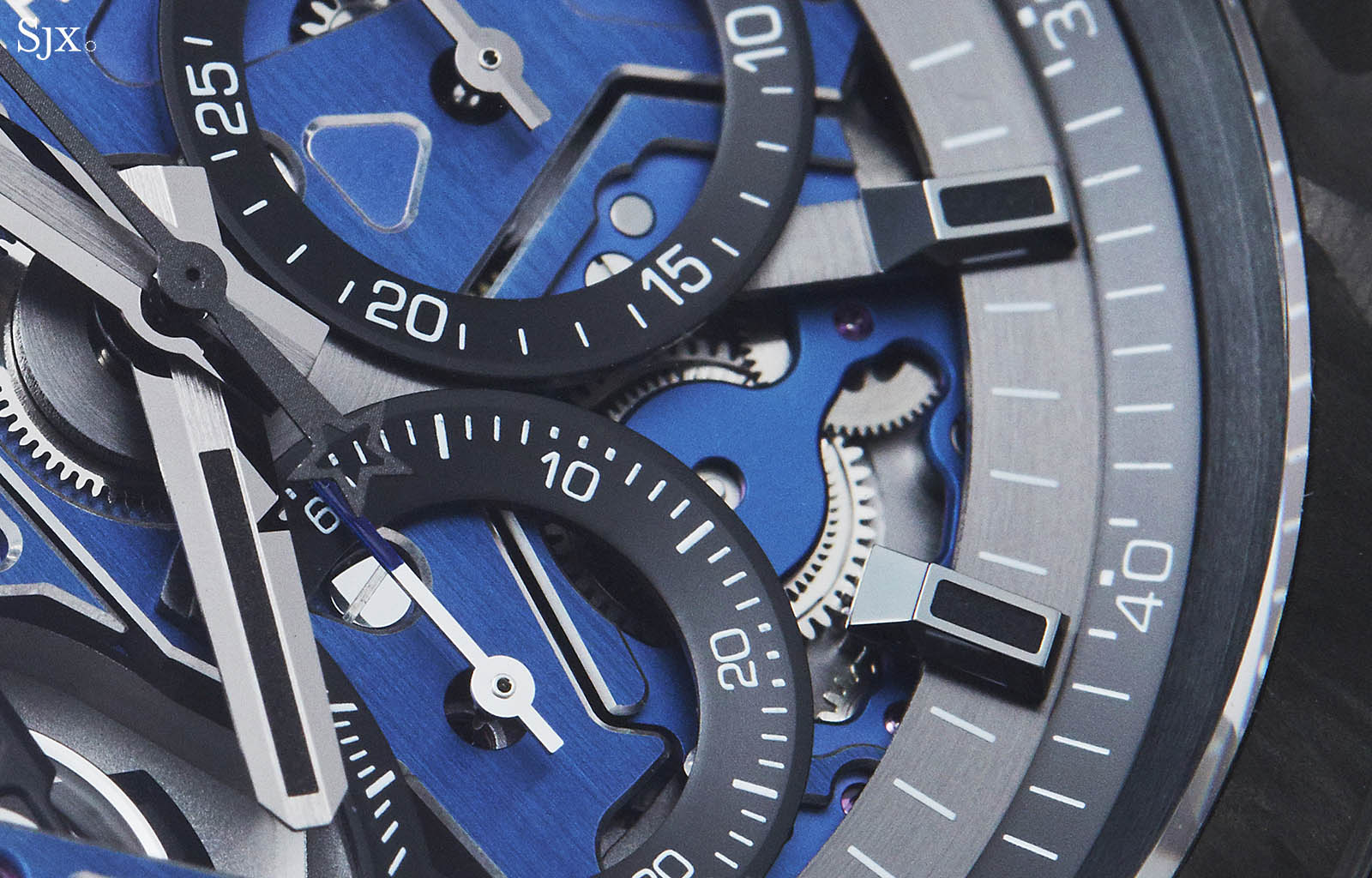 Most of the flat surfaces on the front are brushed and treated blue, while the bevelled edges are rhodium-plated. And visible through the exhibition case back is an open-worked, star-shaped rotor. The styling of the movement, front and back, is mechanical and angular, with lots of contrast colour treatment to bring out the edges and shapes. 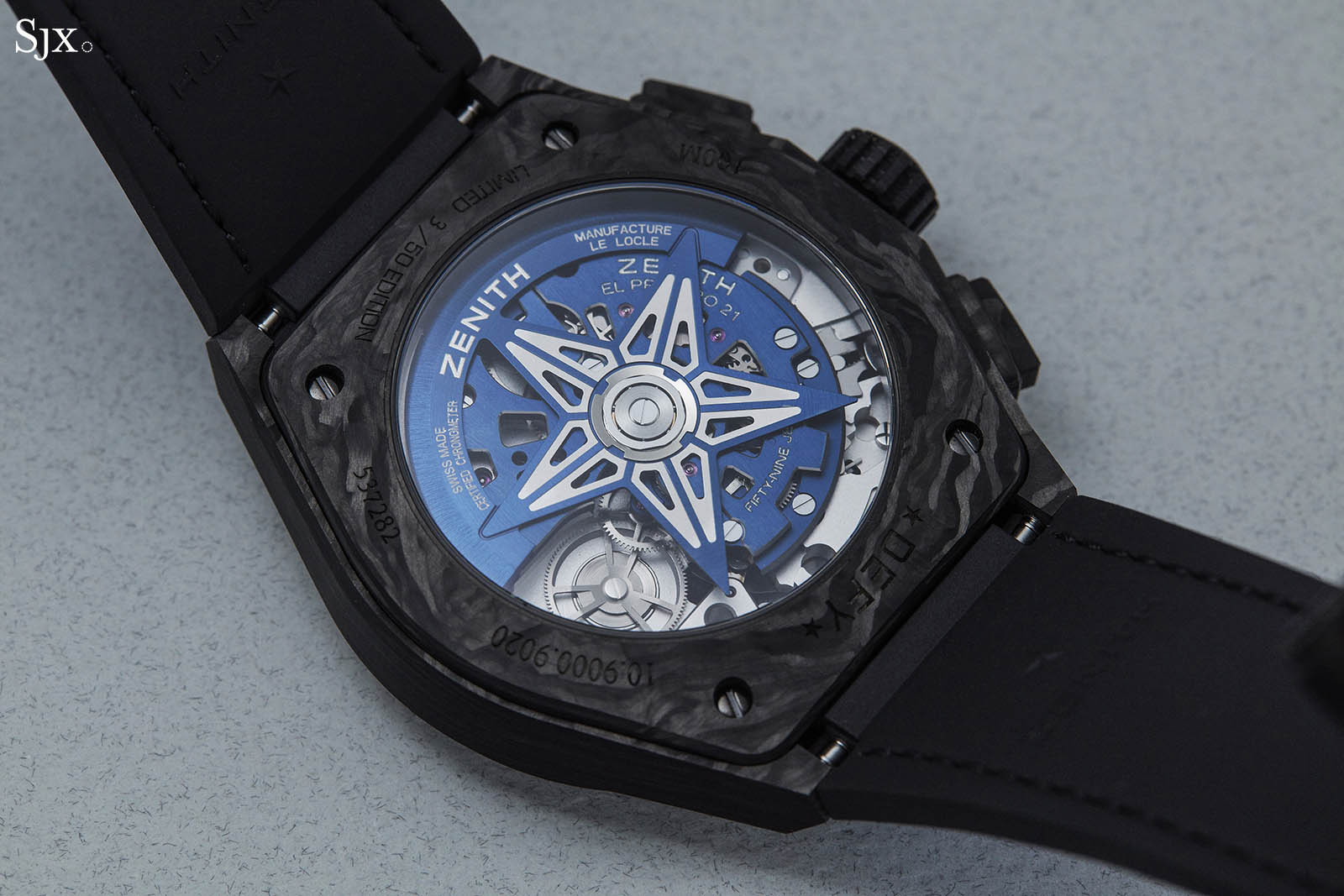 All of the decoration is done by machine, illustrated by telltale signs like minuscule machining marks on the bevels, but it is cleanly and neatly done. More importantly, it suits the style of the movement. 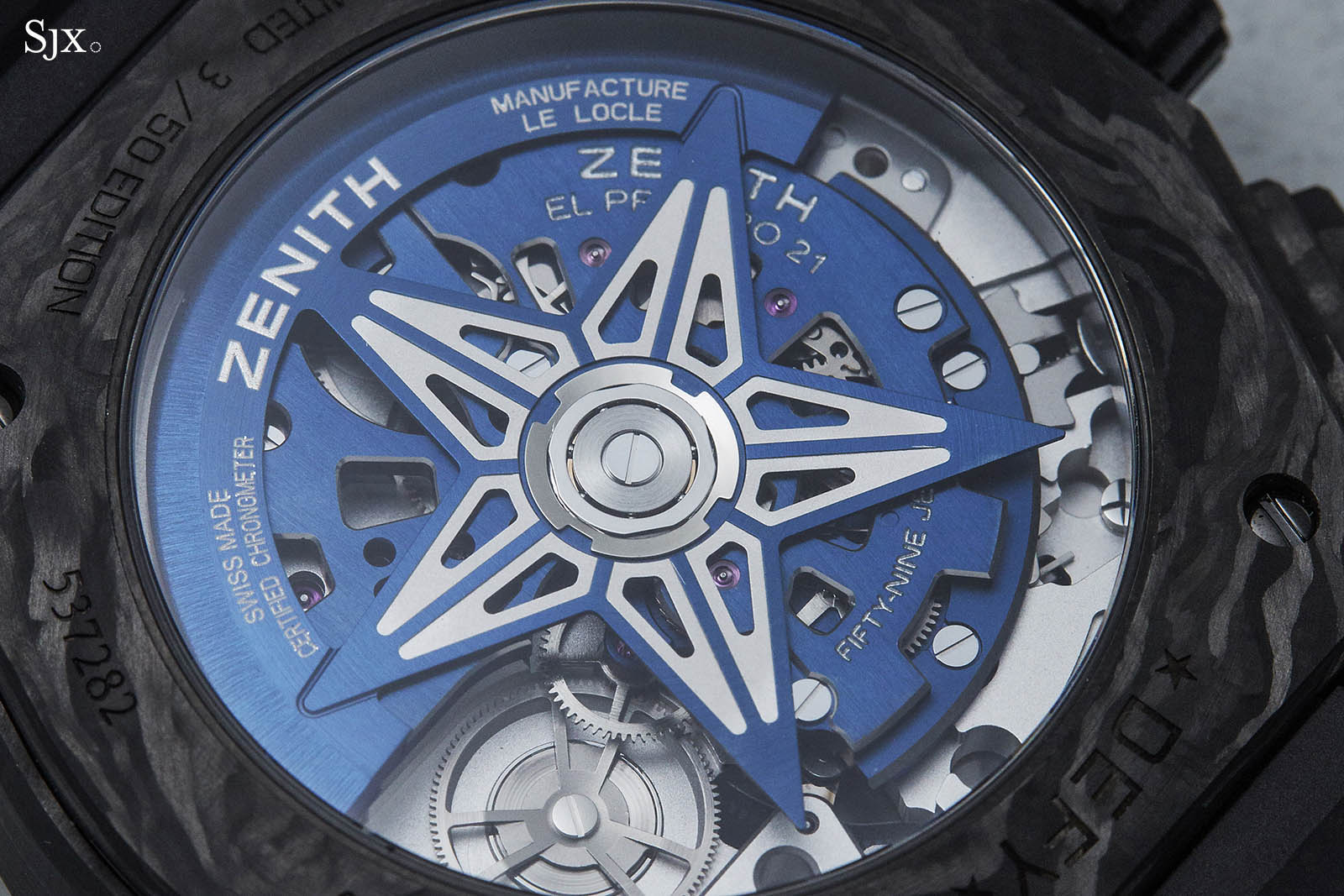 While the Zenith Defy Double Tourbillon is no doubt both visually and mechanically arresting, it is not without a few practical concerns including friction, wear and consequently, service intervals.

On that note, the original El Primero Defy 21 appears to be the more practical option functionally as it incorporates silicon escape wheels – and for just one tenth the price. That being said, the Double Tourbillon is reasonably priced as such things go; the Defy 21 is just a bigger bargain.

High-speed, high-frequency tourbillons remain an irrefutably impressive – and rare – accomplishment in watchmaking – moreover one executed to such an extreme degree. All in all, the Defy Double Tourbillon is a unique proposition, being an ultra-exotic complication for a fair price and made by an historical, mainstream brand.

And finally, a more philosophical question: is this still an El Primero? The construction of the movement is barely descended from the original El Primero, and shares more with the cutting edge, double-regulator TAG Heuer movements. So the answer is probably no, but it doesn’t take away from the technical achievement in the watch.

Correction August 28, 2019: The Defy 21 is no longer equipped with carbon hairsprings.