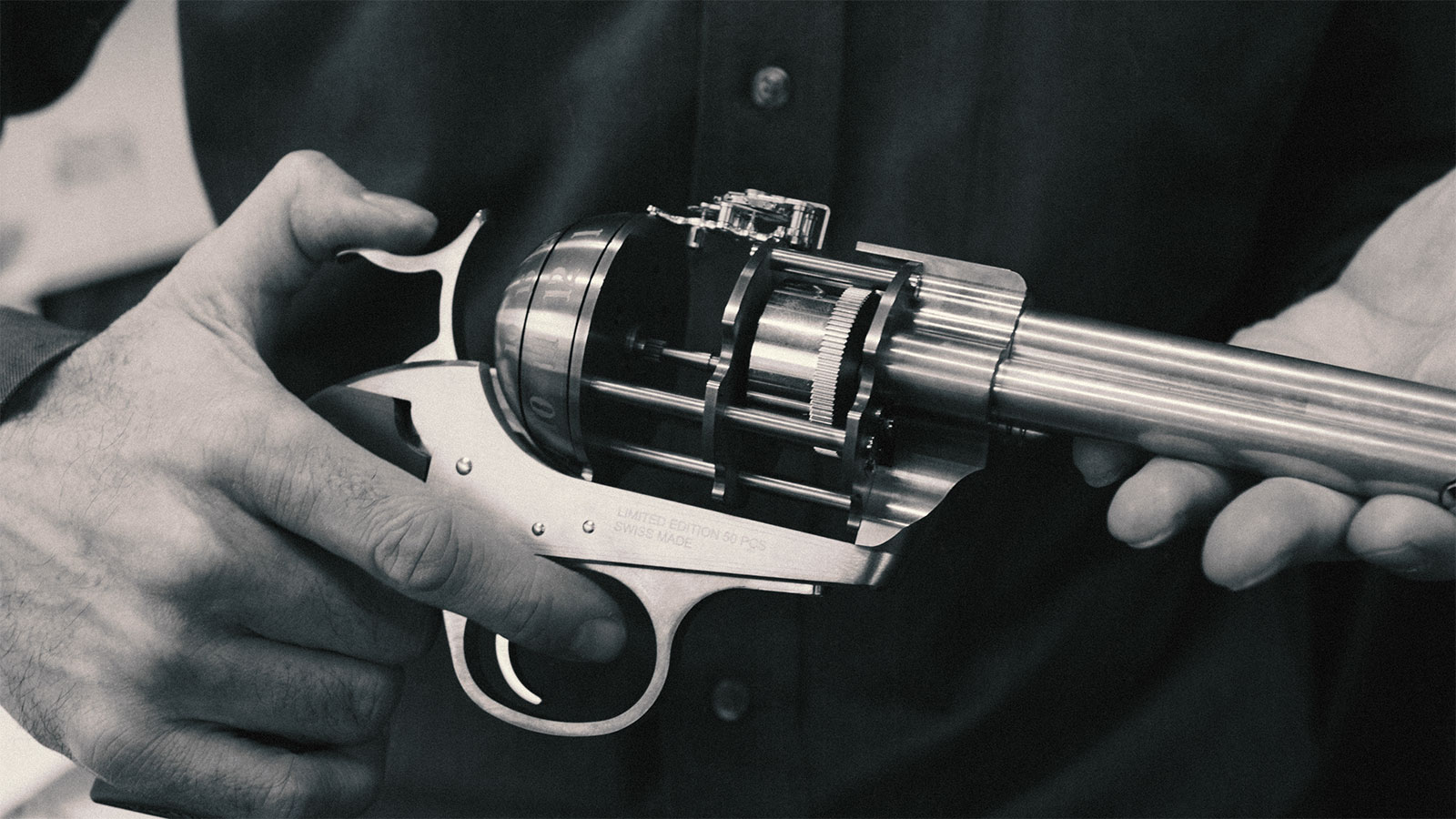 A recent startup dedicated to creating unusual objects, The Unnamed Society makes its debut with a table clock shaped like the Colt Bisley Model revolver of the early 20th century. The clock is produced by L’Epee 1839, the Swiss clockmaker that is responsible for practically all of the unconventional and avant-garde mechanical clocks of recent years, most famously those designed by MB&F but also Chanel. But it’s undoubtedly the success of MB&F’s sci-fi clocks that have compelled various brands, old and new, to develop their own L’Epee 1839 clocks.

Named Hasta la Vista, “goodbye” in Spanish, the clock is the shape and size of an actual revolver, measuring 350mm or just under 14 inches long. It’s made of steel and palladium-plated brass, and can be mounted on its accompanying base either via the grip or the barrel. 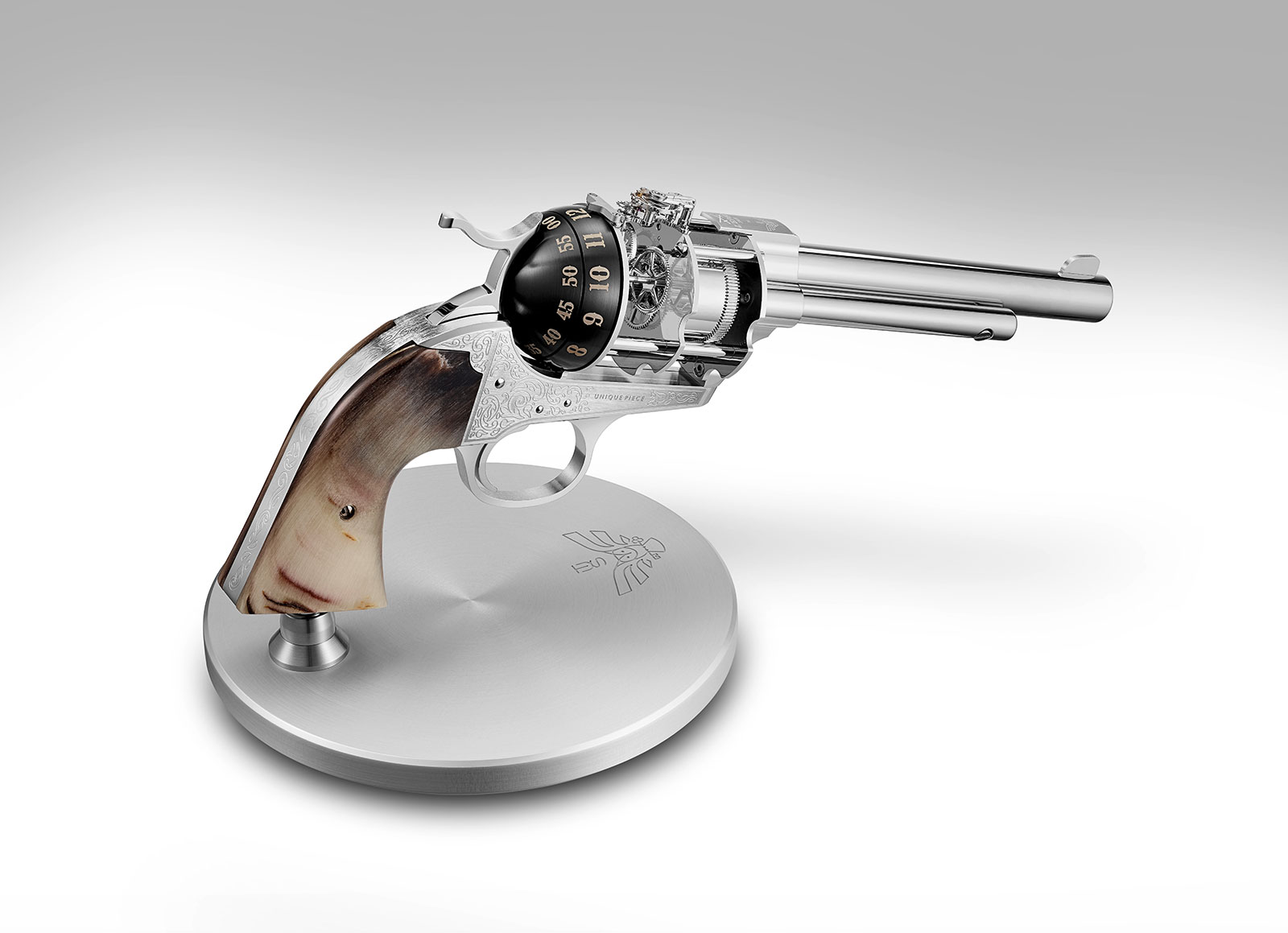 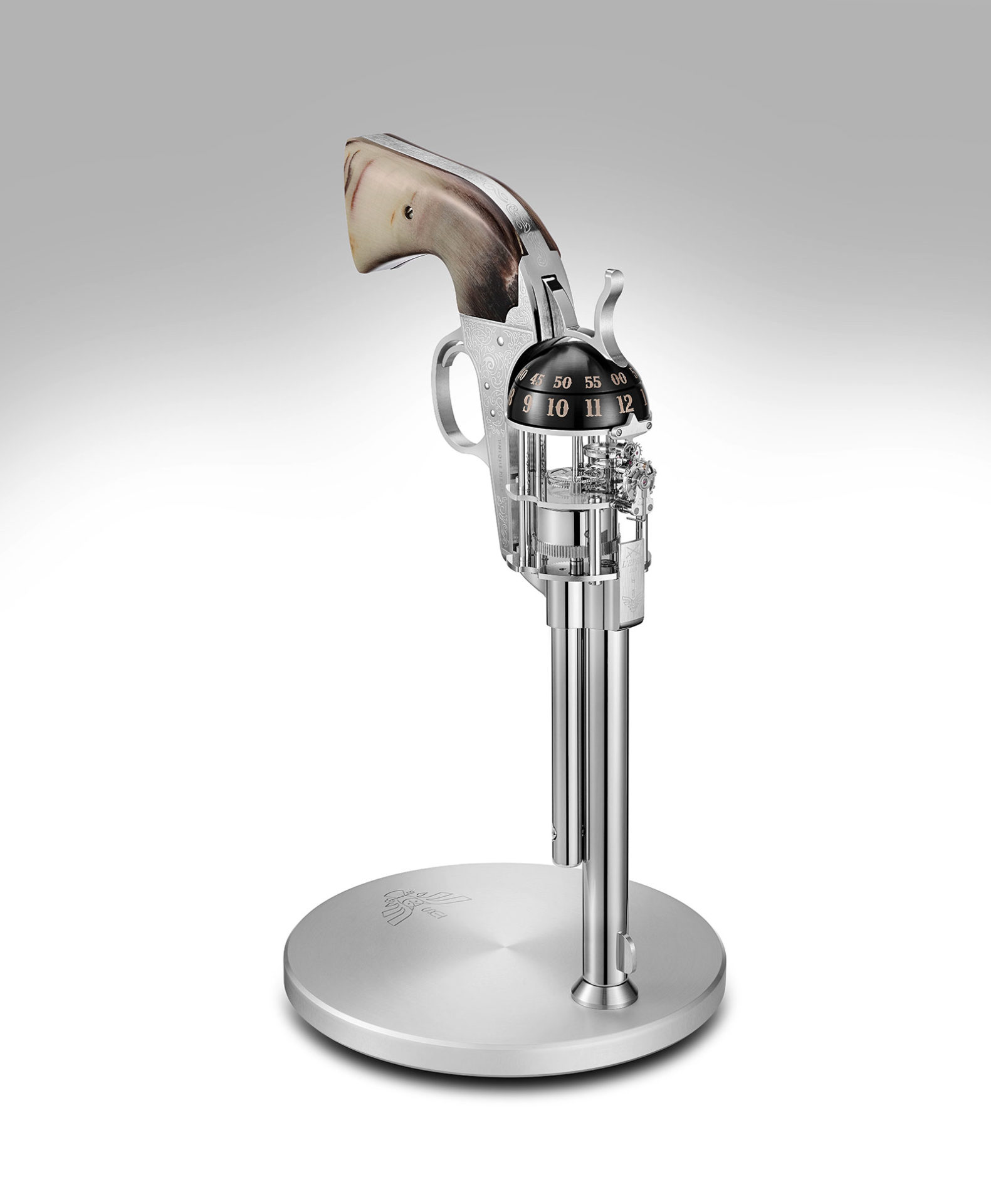 Pictured here with the grip made of horn from the bighorn sheep, as well as engraving on the frame

Mechanically it is identical to the 8-day clocks L’Epee 1839 has produced in other shapes and sizes.

The time is indicated by two revolving cylinders – one each for the hours and minutes – that take the shape of the rear section of the pistol frame. The escapement, wheel train and mainspring are where the cylinder (which contains the bullets) would be. Winding is accomplished by a key that’s inserted into the end of the barrel. 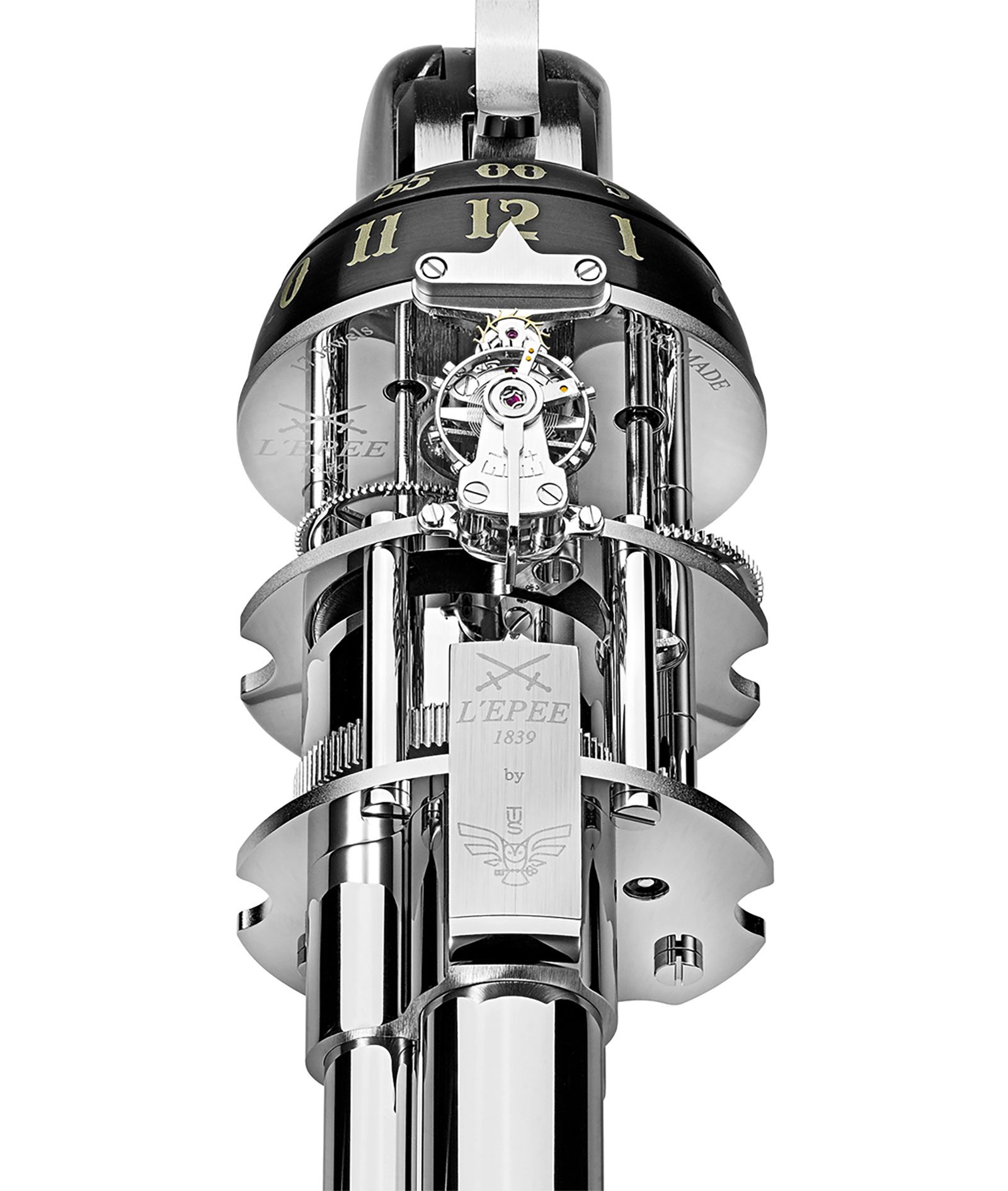 Though it’s a limited edition of 50, each clock can be customised with a variety of options offered for the grip, including leather or animal horn, as well as assorted decoration for the frame, including engraving and precious stone setting. If I had a million dollars, or maybe two, to buy a Rolex chronograph, I could perhaps buy one of the five unique “Zenith” Daytonas in platinum, a Datocompax “Jean-Claude Killy” (as Davide Munari did), a “Paul Newman” Daytona (not), or a ref. 4113 split-seconds.

Of the many ways to spend that much money on a Rolex chronograph – and not any other complication – the ref. 4113 is the most unusual, interesting and horologically complex. At the same time, the ref. 4113 was also a dead-end for Rolex, because it never furthered development of the split-second chronograph and instead relied on standard chronographs for all its auto-racing activities. 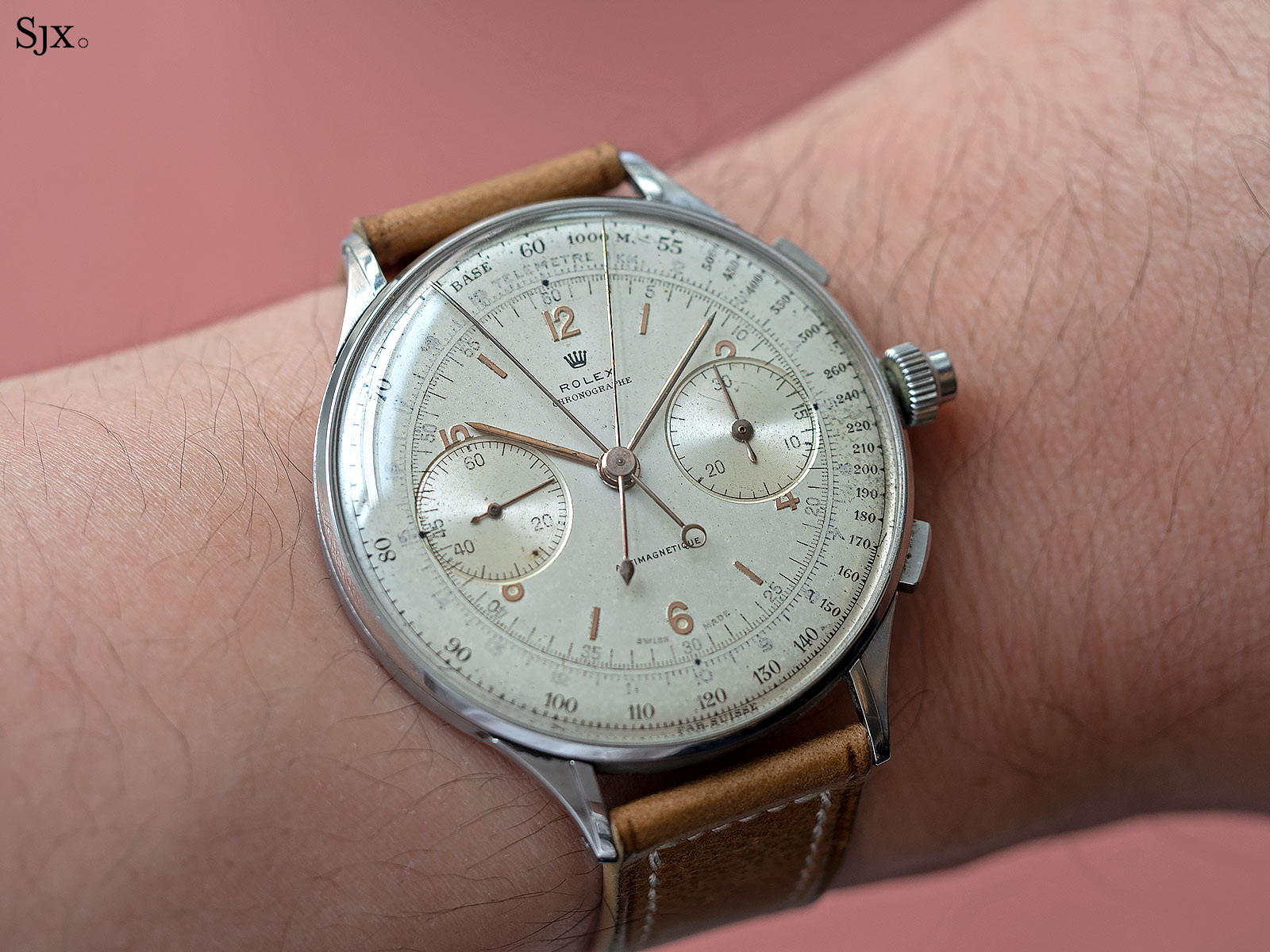 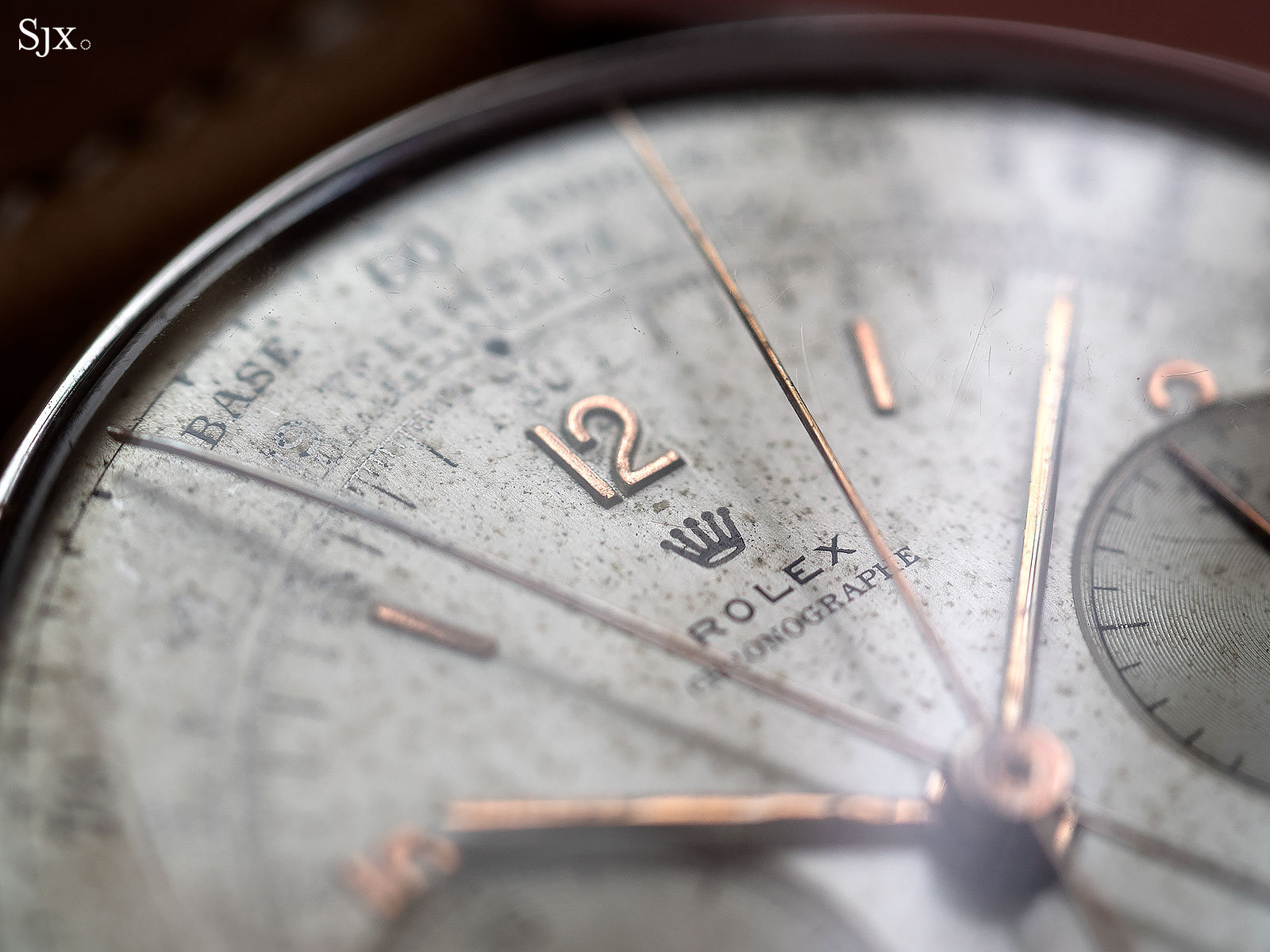 Though formal documentation as to its origins no longer exist or are unknown, the story behind the ref. 4113 is by now familiar thanks to research over the years as examples emerged at auction. In 1991, a pair of these emerged at Christie’s, at its Geneva and London salerooms respectively.

The second watch sold that year had the case number “051’318” – the same watch shown here. It went for £27,500 in October at Christie’s in London, having been consigned by the widow of a former employee of a racing team, who had in turn received the watch as a gift from a driver. According to a Facebook post by veteran American watch dealer Jeff Harris, he bought the watch in London – the price was then equivalent to US$48,000 – and later also owned another two examples of the ref. 4113.

(After this article was first published, Mr Harris got in touch to say that he bought his second ref. 4113 also in 1991, shortly after the first, and most likely from Sotheby’s in New York. And he then sold both later that year in Japan.) 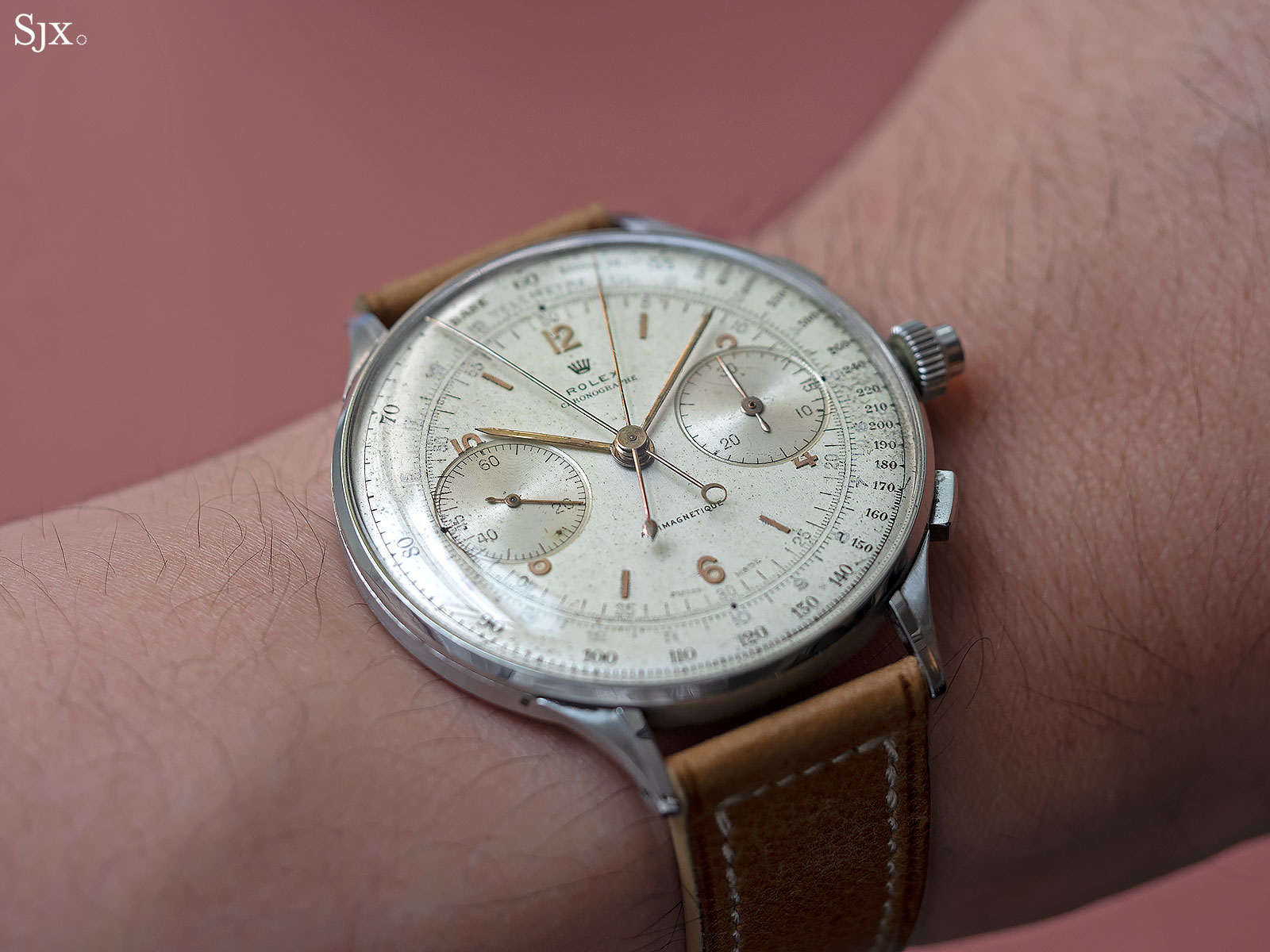 Along with later examples that emerged, these two watches established that the ref. 4113s were all given to prominent racing drivers of the 1940s – a period when Rolex sponsored auto-racing – notably those associated with the Giro di Sicilia (“Lap of Sicily”), a lengthy race across Sicily that still happens annually. As it happens, Rolex is once again the official timekeeper for Formula 1, having started since the 2013 season, but the split-seconds chronograph will not return to the catalogue.

Most of the known watches are identical, save for two. The watch with case “051’019” published in 100 Superlative Rolex Watches by Italian collector John Goldberger has a pink gold crown, while one of the two examples owned by denim millionaire Sandro Fratini, with case number “051’323”, has a two-tone case – a steel case middle and back combined with a gold bezel, crown and button – and was featured in the book showcasing his collection, My Time.

Oversized but not Oyster

The ref. 4113 is uncommon looking, even by modern standards. It is big at 44mm in diameter – the case must have been gargantuan in 1942 – but also thin, giving it the proportions of a dinner plate.

But unlike most Rolex watches, the ref. 4113 does not have a water-resistant Oyster case – its only intrinsic shortcoming. Instead the case has a snap-on back, like the other famous large and flat Rolex, the ref. 8171 “Padellone”. As a result, the water-resistance of the case deteriorates over time, explaining the obvious ageing to the dial on this example, which is also found on the other ref. 4113s known. 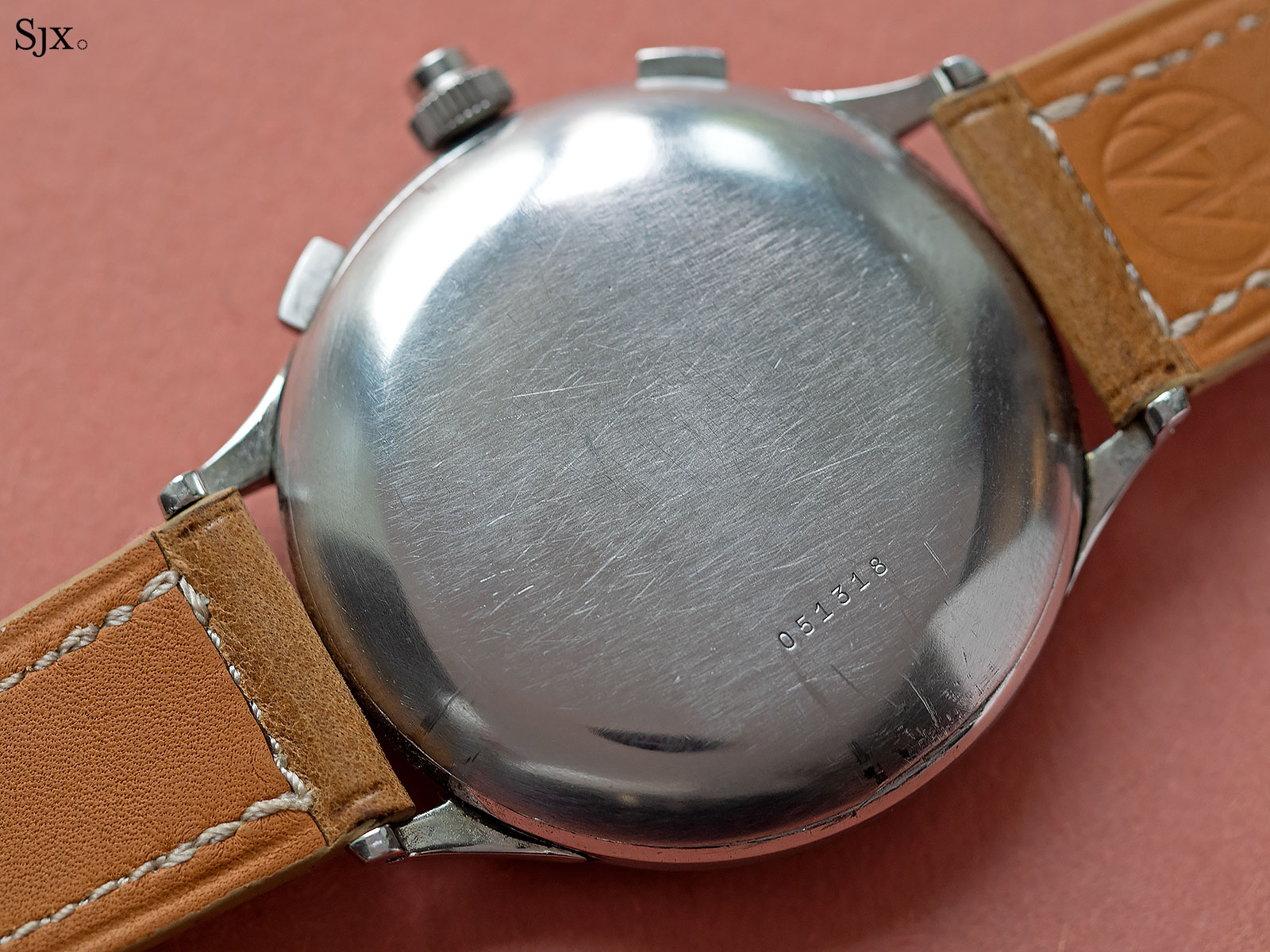 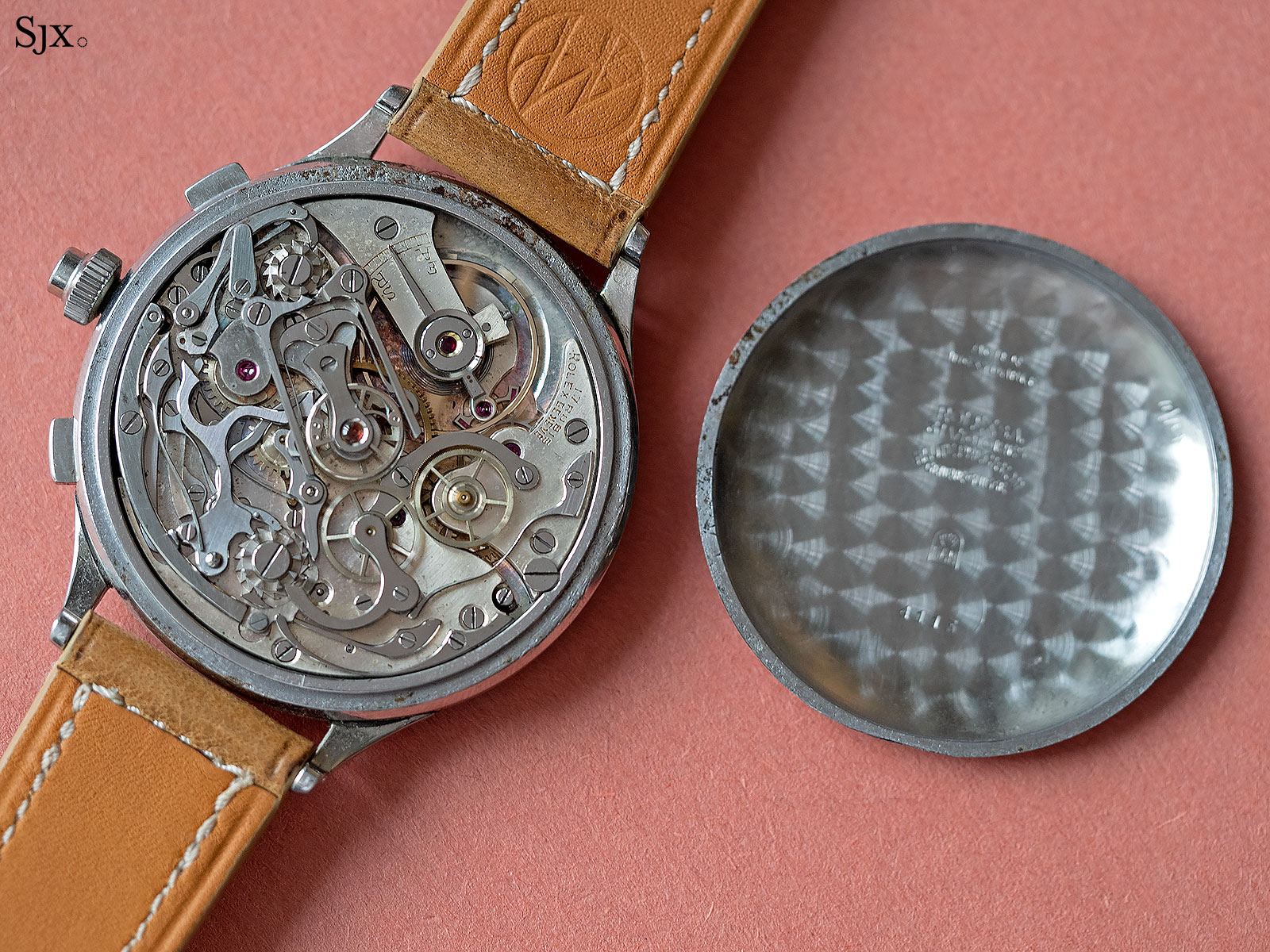 The text inside translates as “31 victories, high precision”

This ref. 4113 has spotting on the dial, as well as a faded telemetric scale and minute track, both of which were originally printed in pale blue. The tachymetre is more visible, having been printed in black. Despite the ageing, the dial remains attractive, primarily because the hands and markers are in pink gold gilt, giving the dial a good deal of contrast and life.

That being said, other examples, including the one Phillips sold for a record price in 2016, do have better preserved dials. 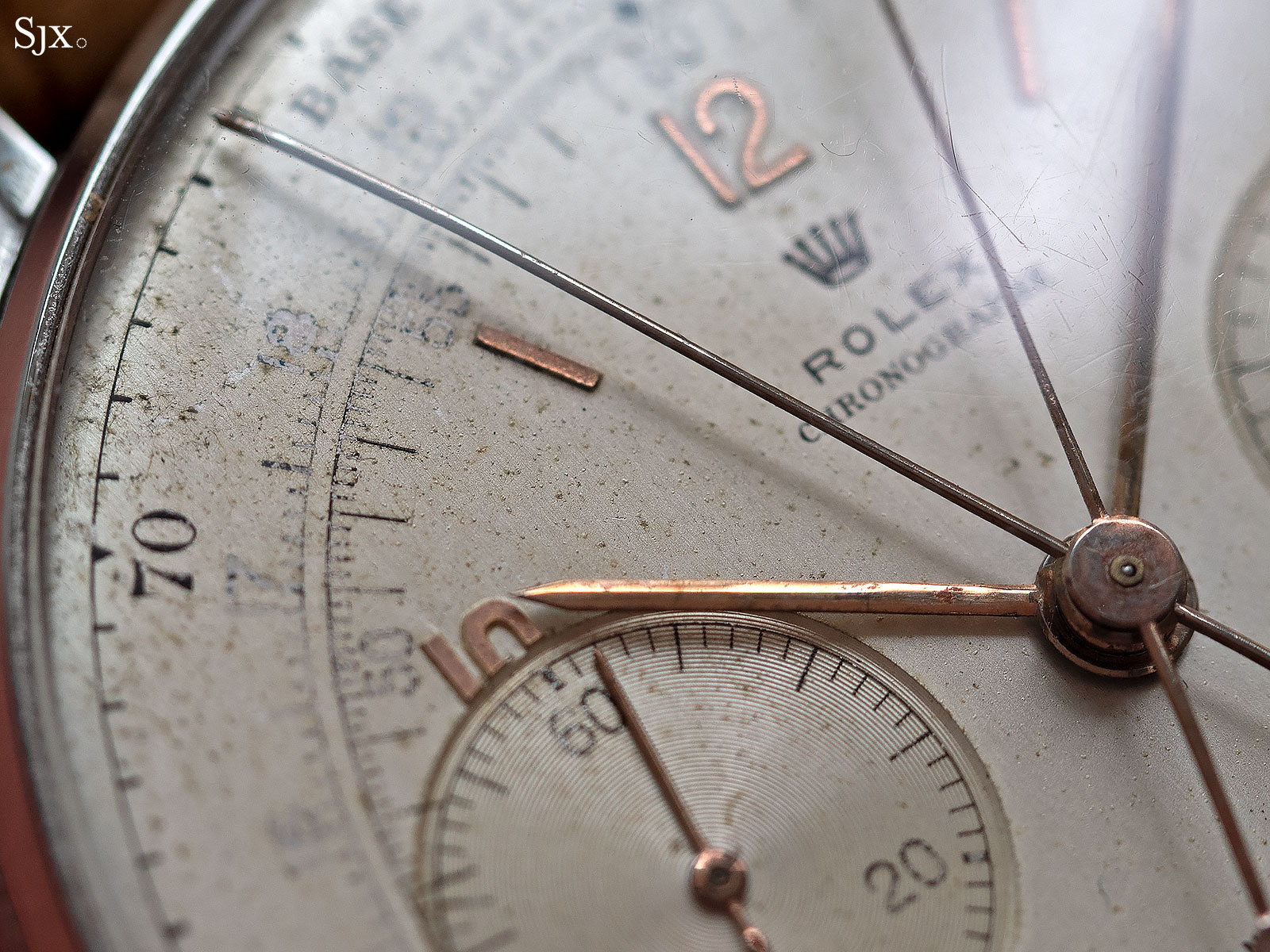 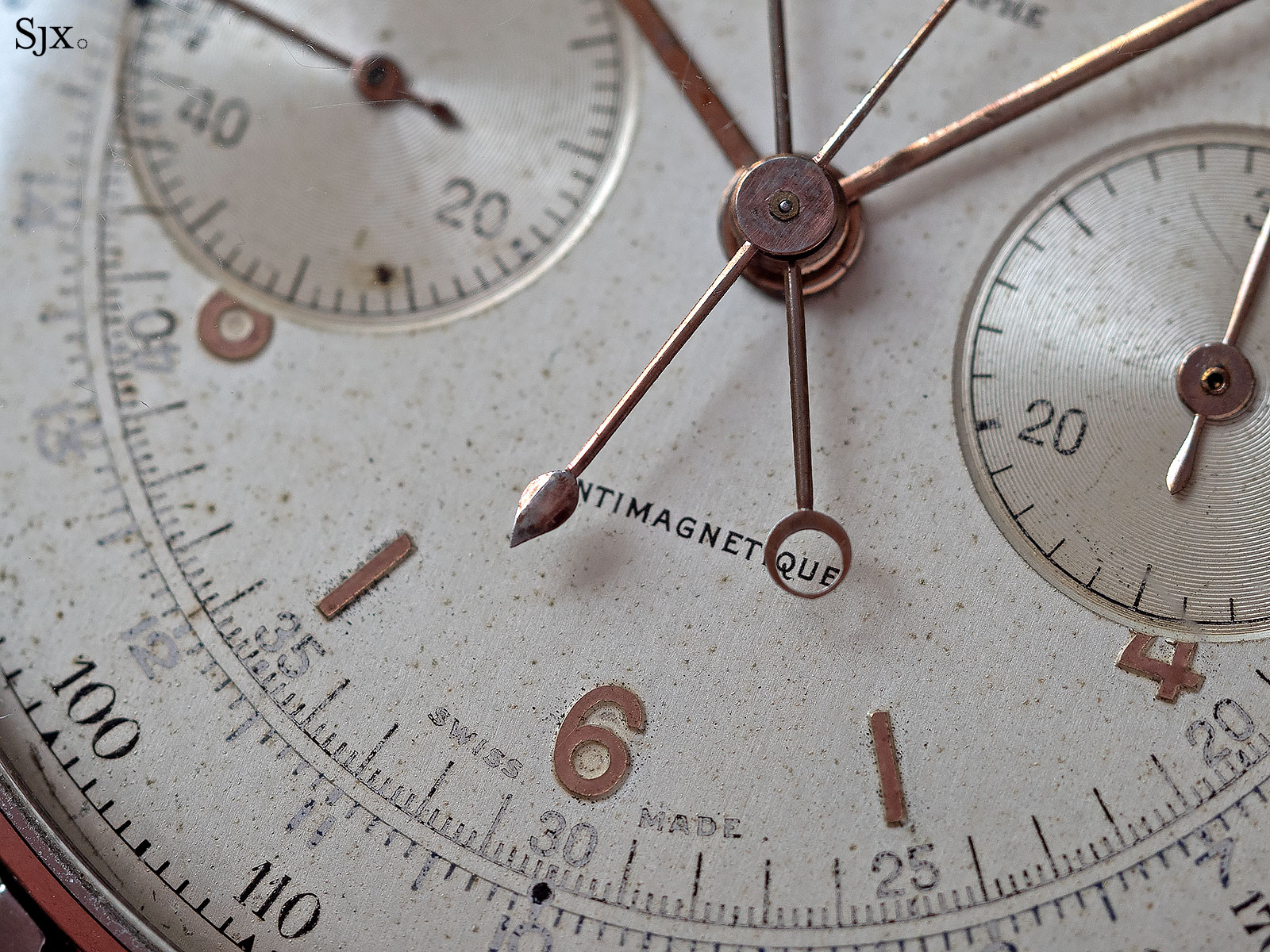 The reason for its enormous case is the movement inside, the Valjoux 55 VBR, a split-seconds calibre produced for a few years in the late 1940s. The version of the movement found inside the ref. 4113 has three buttons: the topmost for the split-seconds, the middle one that’s co-axial with the crown for start and stop, and the bottom pusher for reset.

Measuring 17 2/3”’ in diameter, or just under 40mm, the Valjoux 55 was the split-seconds variant of the Valjoux 54, a chronograph movement originally conceived for pocket watches. The movement was used, in different iterations, by a variety of brands besides Rolex, including Eberhard and Universal. For more on the movement and other brands that utilised it, the article on the split-seconds complication written by PH Zhou for Hodinkee in 2016 is useful. The Universal Geneve Marina Militare rattrapante “A. Cairelli”, powered by the mono-pusher variant of the Valjoux 55 The military designation and stock code on the case back; this example sold at Christie’s Hong Kong in May 2019 for the equivalent of US$221,000

Unsurprisingly for a watch conceived as a gift for racing drivers, the Valjoux 55 inside the ref. 4113 is no nonsense, in short, the complete opposite of modern day split-seconds chronograph that are all haute horlogerie. The bridges are undecorated, but the steel levers and springs of the chronograph mechanism are straight grained and bevelled; the movement must have been appealingly functional looking when it was fresh out of the factory in 1942. Like the dial, the movement also shows sign ageing, again likely a consequence of the case. But also like the dial, it remains attractive, both visually, and philosophically for its purity of purpose. 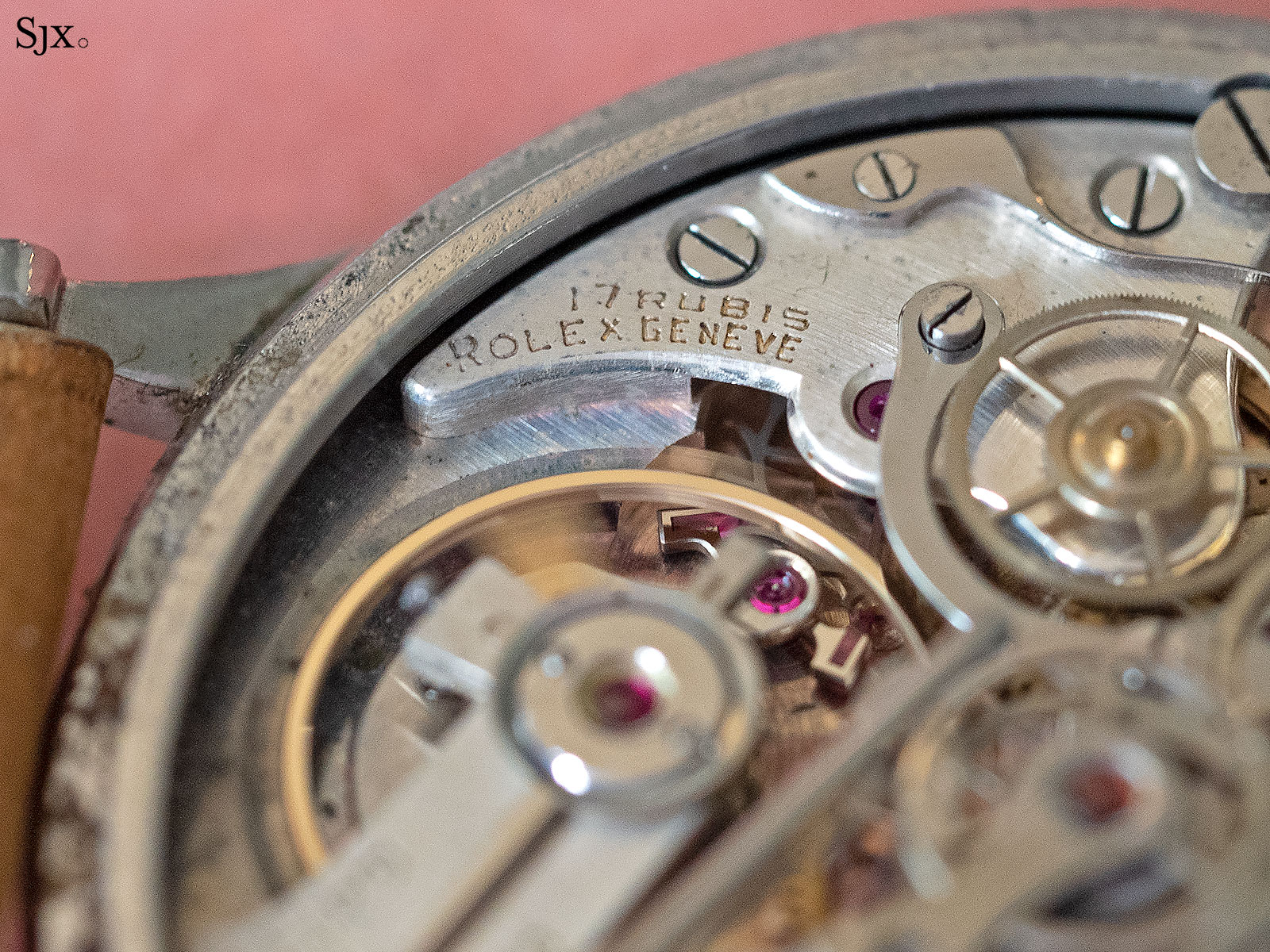 In 2000, another specimen sold at Christie’s Geneva for 213,250 Swiss francs. Four years later, Antiquorum Geneva sold one from the “Carlo Rivetti Collection” for 234,500 francs, but the watch had a reprinted dial.

In 2006, Antiquorum Geneva then sold the watch that was part of Italian collector-turned-author Guido Mondani’s collection, with the case number “051’324”, for 738,500 francs.

Then in 2011 – 20 years after it first sold in London – the watch pictured here sold at Christie’s Geneva for 1.04m francs, becoming the first Rolex watch to break the million-franc mark at auction.

Two years later, the watch from Christie’s 1996 New York sale came on the market once again, this time selling for for 1.12m francs at Christie’s Geneva. Then in 2016, the same watch was offered by Phillips in Geneva, where it sold for a still unsurpassed 2.41m francs.

Stay tuned for parts II and III that’ll look at two other notable vintage Rolex watches in the same sale.

Many thanks to John Goldberger for his input on certain examples of the ref. 4113.