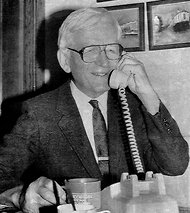 The New York Times just reported the passing of Norman F. Ramsey, the physicist whose work led to the atomic clock. In the late forties, Dr Ramsey pioneered a method, now known as the Ramsey method, of measuring the osillations of atoms. And in 1967 Dr Ramsey invented the hydrogen maser atomic clock. For his work Dr Ramsey won the Nobel Prize in Physics in 1989.