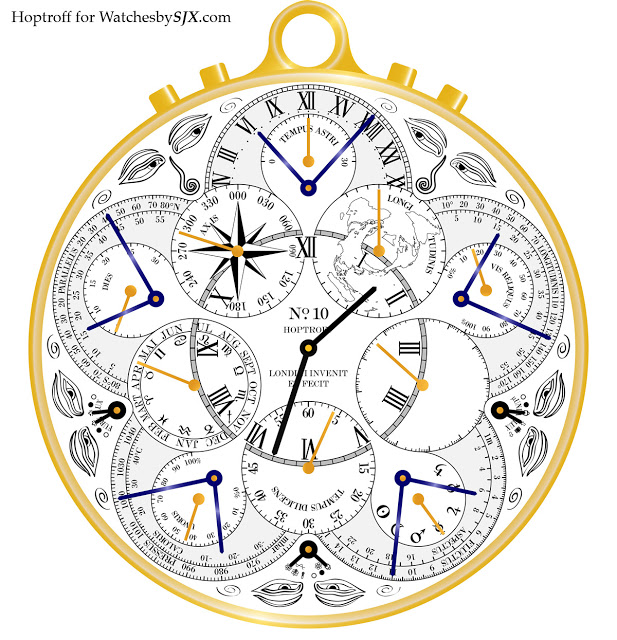 London-based Hoptroff has announced its No. 10 pocket watch, which will be equipped with a Chip Scale Atomic Clock (CSAC), a miniaturised atomic clock.

Made by Hoptroff, a London-based maker of electronic watches, the Hoptroff No. 10 is a an enormous pocket watch measuring 82 mm wide and 25 mm thick. It will keep time to 1.5 seconds every one thousand years, thanks to the the Symmetricom SA.45s Chip Scale Atomic Clock (CSAC) inside.  Unlike most electronic timekeepers which can sync via radio waves with an atomic clock, the No. 10 is actually an atomic clock. It is in effect the world’s first atomic watch thanks to the SA.45s CSAC inside. The SA.45s is the world’s first commercially available CSAC, without which a pocket watch sized atomic clock would not have been possible.  The CSAC inside comes from NASDAQ listed Symmetricom, which makes atomic clocks and other precision timekeeping devices. Its atomic clocks are used by scientists, governments and military forces around the world, and many are used to keep the atomic time that most clocks and watches are set by.

Given the technology inside this, it is not surprising the watch will have a mind boggling number of functions, as illustrated below. Only 12 of these will be made, and priced at about GBP50,000,or about USD77,900. This is a piece of extraordinary technology, possibly at the cutting edge of timekeeping thanks to the CSAC, but something like that will almost certainly get cheaper with time (no pun intended). It is the first, but definitely not the last portable atomic watch. I am certain more timepieces containing the Symmetricom CSAC will emerge in the future, and Symmetricom will unveil progressively smaller, and cheaper CSACs.