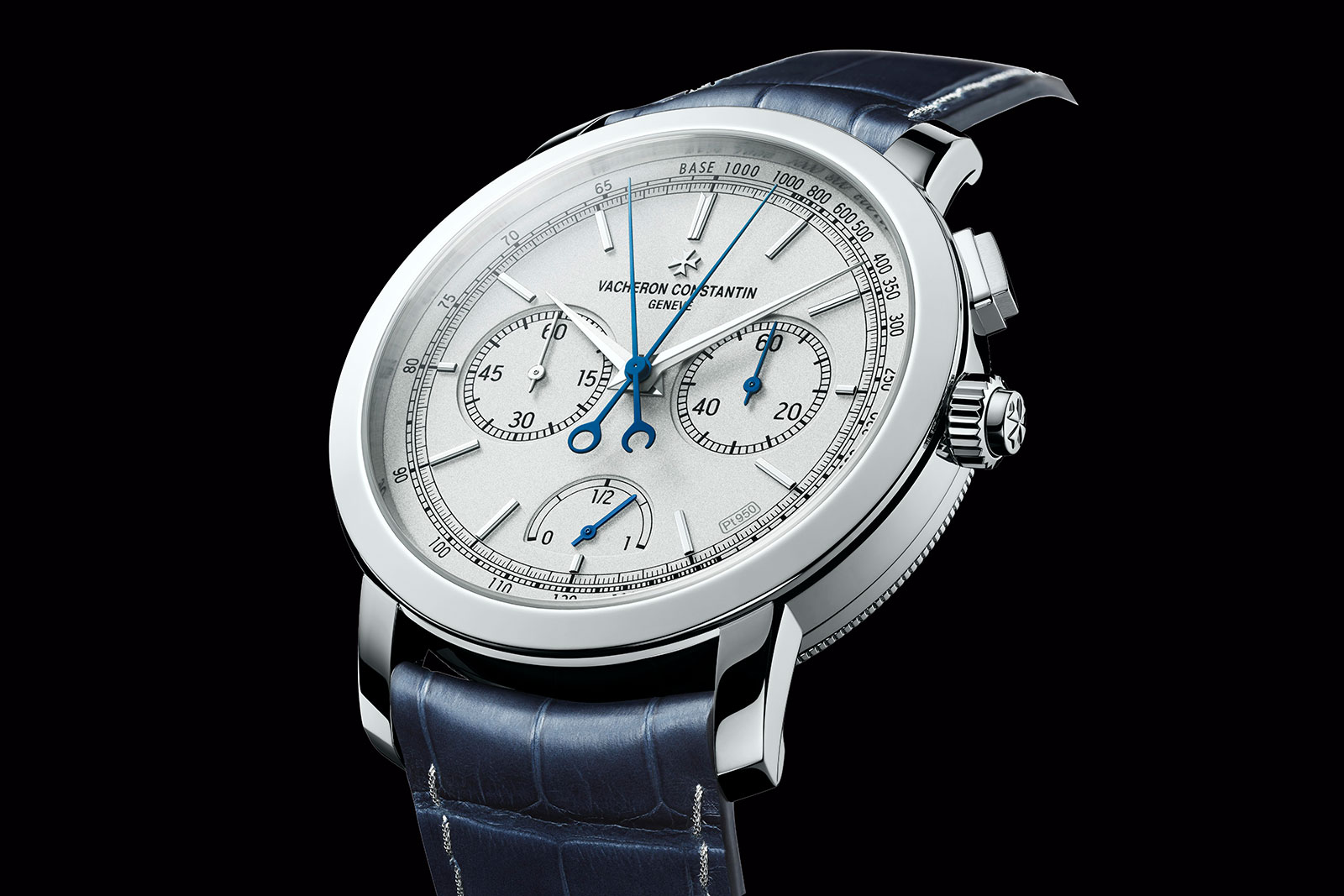 First revealed in 2015 inside the Harmony Grande Ultra-Thin Complication Chronograph, the cal. 3500 is a thin, split-seconds chronograph movement with a beautiful construction and novel peripheral winding mechanism. After a brief hiatus, the cal. 3500 has returned at Watches & Wonders 2021 with the Traditionnelle Split-Seconds Chronograph Ultra-Thin Collection Excellence Platine.

Cleaner and more formal in style than the Harmony of 2015, the new Traditionnelle split-seconds boasts the same gorgeous cal. 3500, and because it’s a Collection Excellence Platine (CEP) edition, a solid platinum dial. Vacheron Constantin is on a roll with the CEP watches in 2021, with the Traditionnelle split-seconds being the second CEP edition for the year, after the elegant and quirky American 1921. 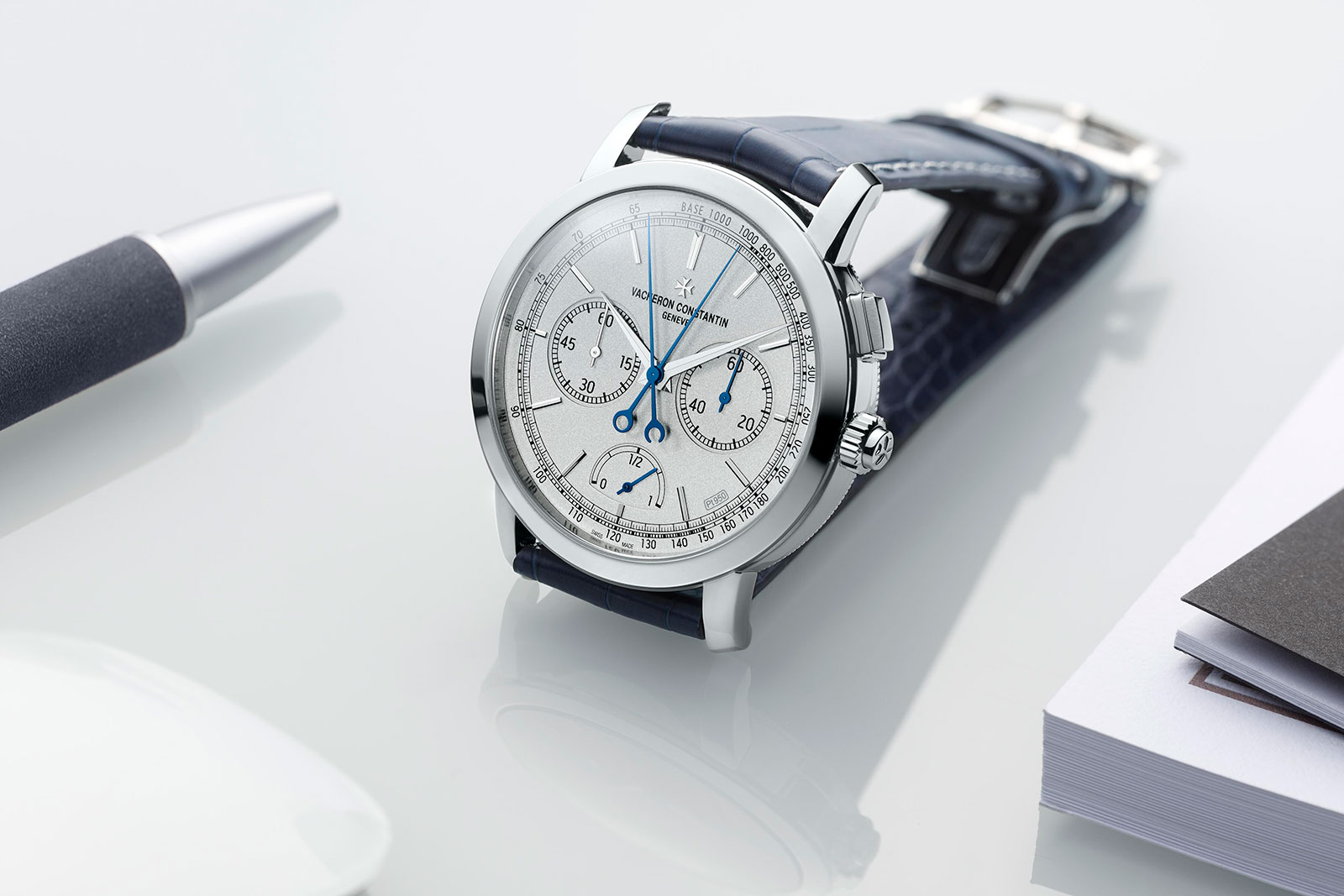 I was wowed by the cal. 3500 when it made its debut in the Harmony split-seconds chronograph in 2015, and found it a shame that the movement disappeared from the catalogue. The cal. 3500 deserved to be revived, and now it has been.

Beautifully traditional in its construction and endowed with intricate and elegant details, the cal. 3500 is one of the finest modern-day chronograph movements. Beyond its aesthetics, it is also exceptionally thin at just 5.2 mm high, making it a feat of construction. And it is also innovative with its peripheral winding mechanism, which is admittedly not new but almost never found on classically handsome movements. 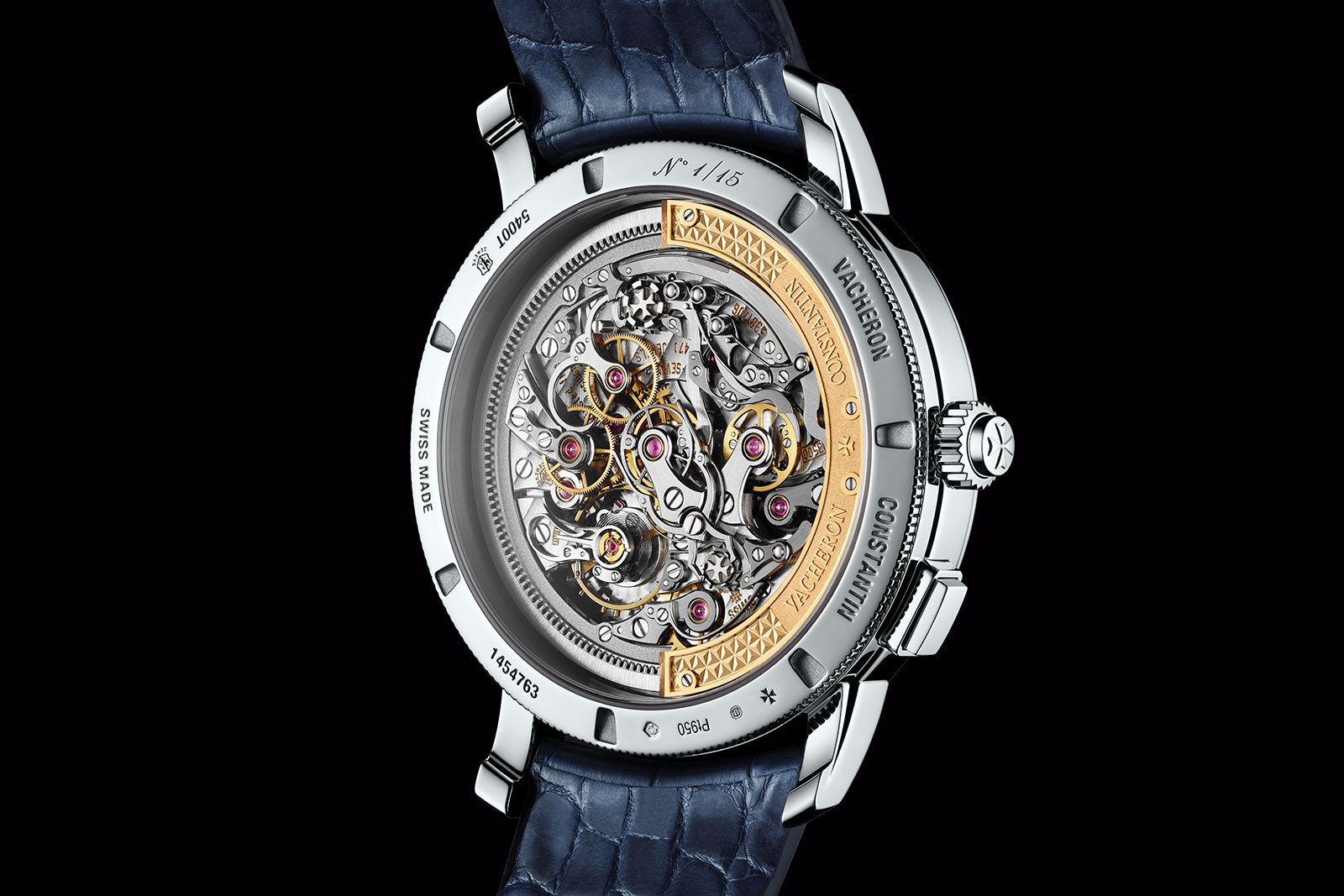 The Traditionnelle split-seconds is an expensive watch – it retails for about US$300,000 – but it is arguably worth it. Not only is it impressively complex, there is nothing else quite like it. The recently-launched Lange Triple Split is perhaps more complex, but it is substantially thicker – its movement is almost twice the height of the cal. 3500 in fact.

The closest comparables were the Patek Philippe Ref. 5959 and 5950, both ultra-thin split-seconds chronographs powered by the same hand-wind CHR 27-525 PS movement (that’s 0.05 mm thicker than the cal. 3500) . They have been discontinued, but when available both had retail prices higher than the Traditionnelle split-seconds. 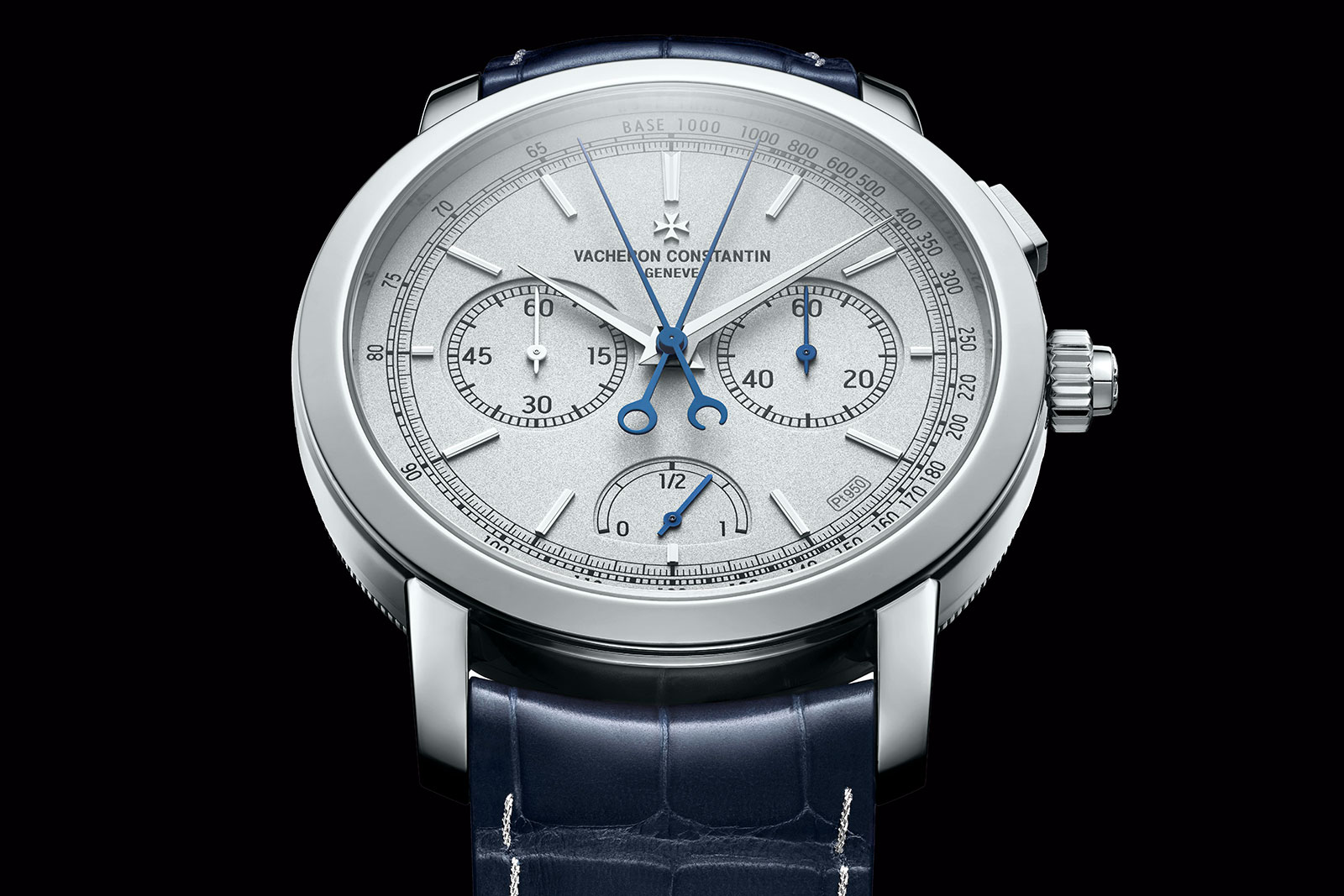 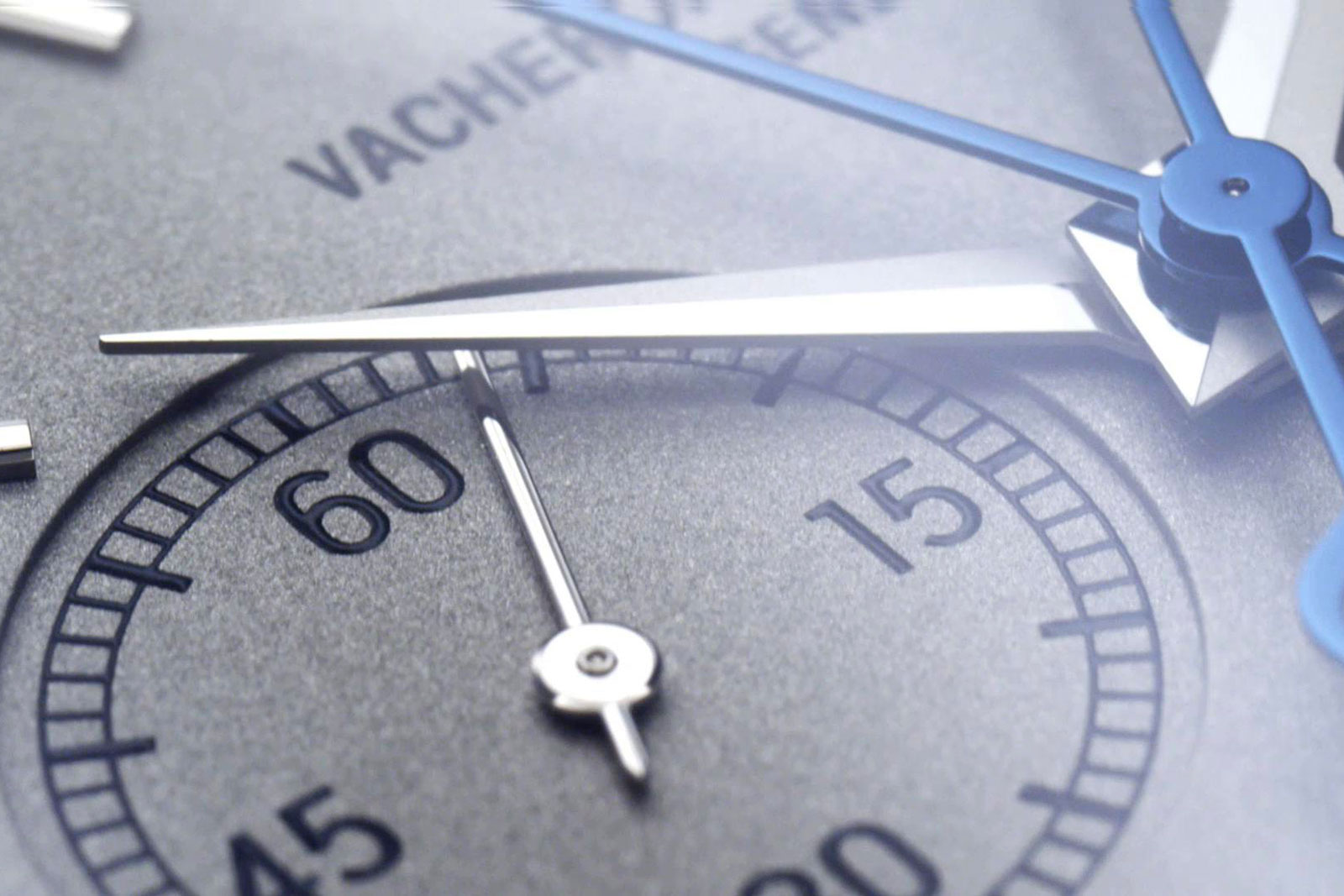 Being a CEP edition, the Traditionnelle Split-Seconds is dressed in a familiar livery. As is tradition for the CEP, the dial is sandblasted platinum, giving it a finely-grained texture. The hour markers and hour and minute hands are solid white gold, while the rest of the hands are blued steel. 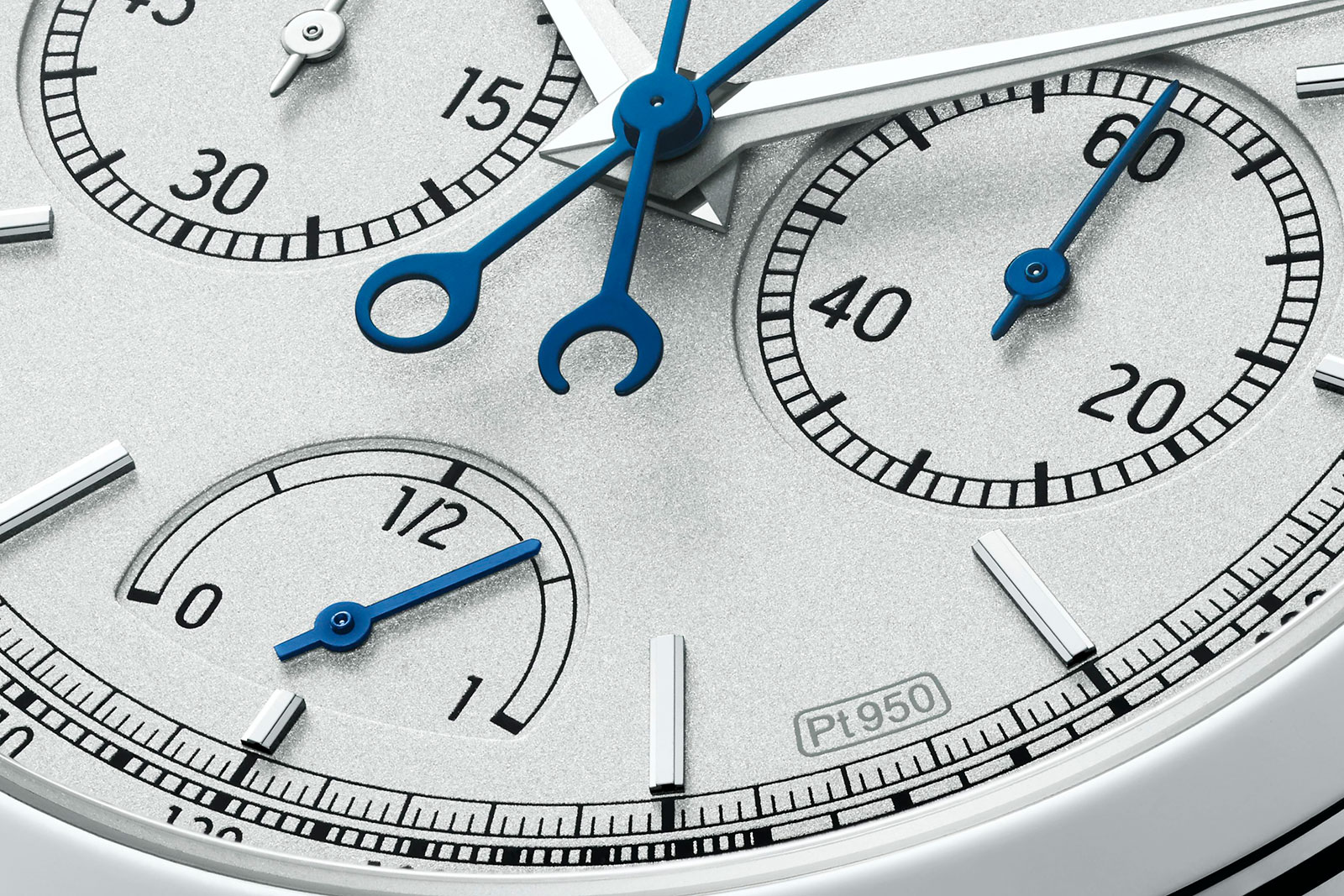 The case is naturally platinum as well, as is the folding clasp. And to maximise the use of platinum, the thread that holds the strap together is woven from a mix of silk and platinum wire. 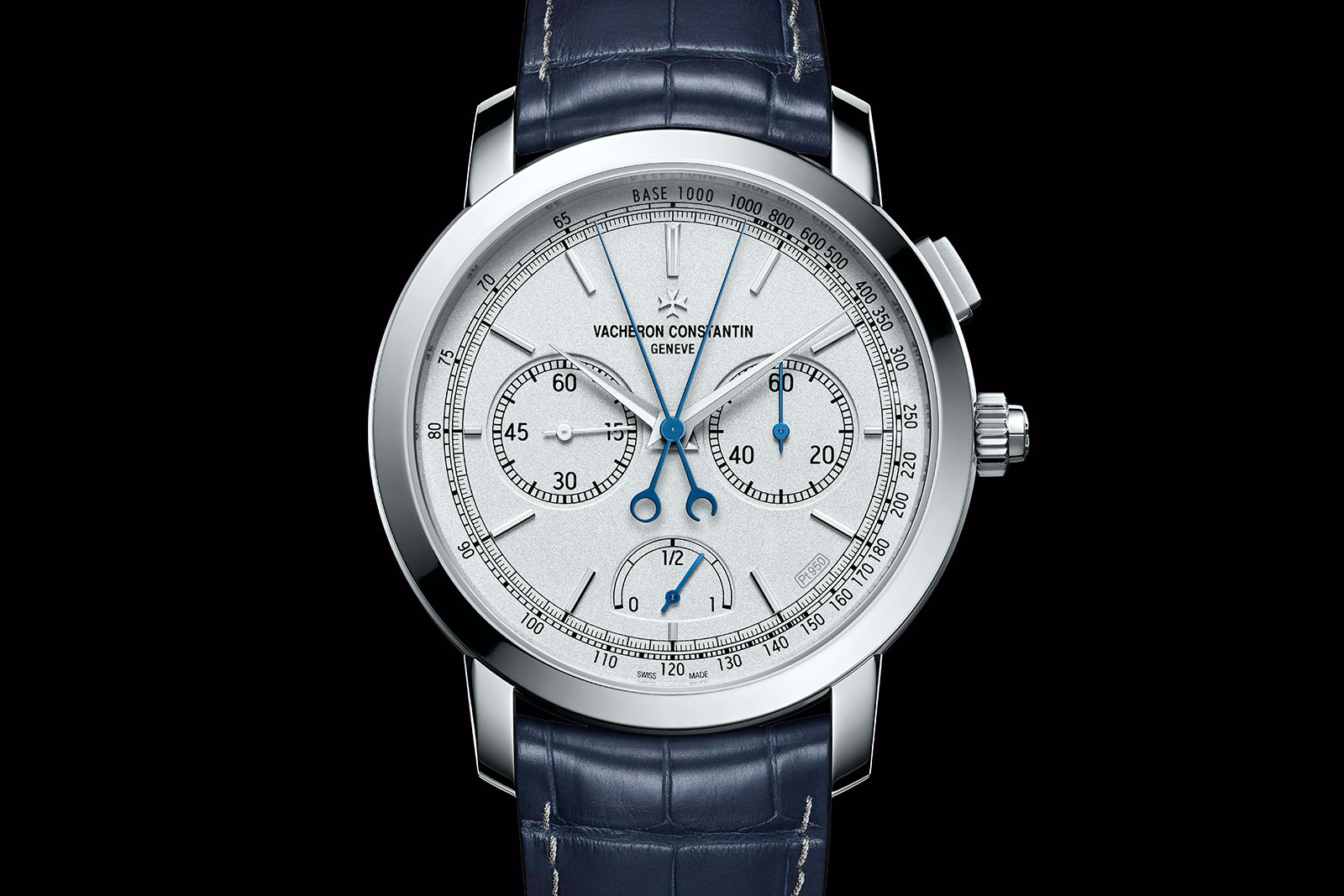 Measuring 42.5 mm in diameter, the case is largish, but a thin 10.72 mm high. Being a Traditionnelle model, the case is characterised by straight, clean lines, with the only flourish being the Maltese cross subtly worked into the sides of the lugs. 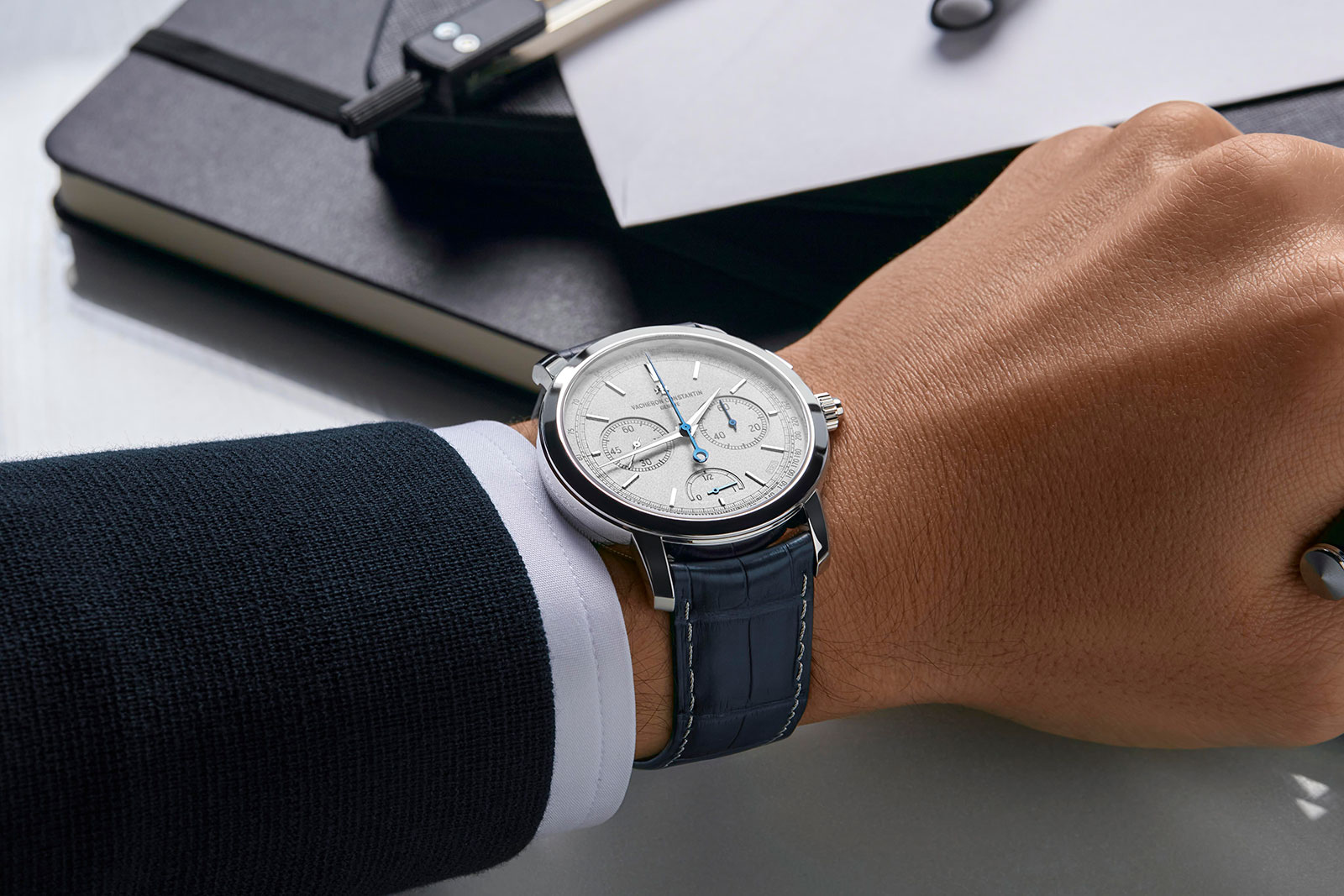 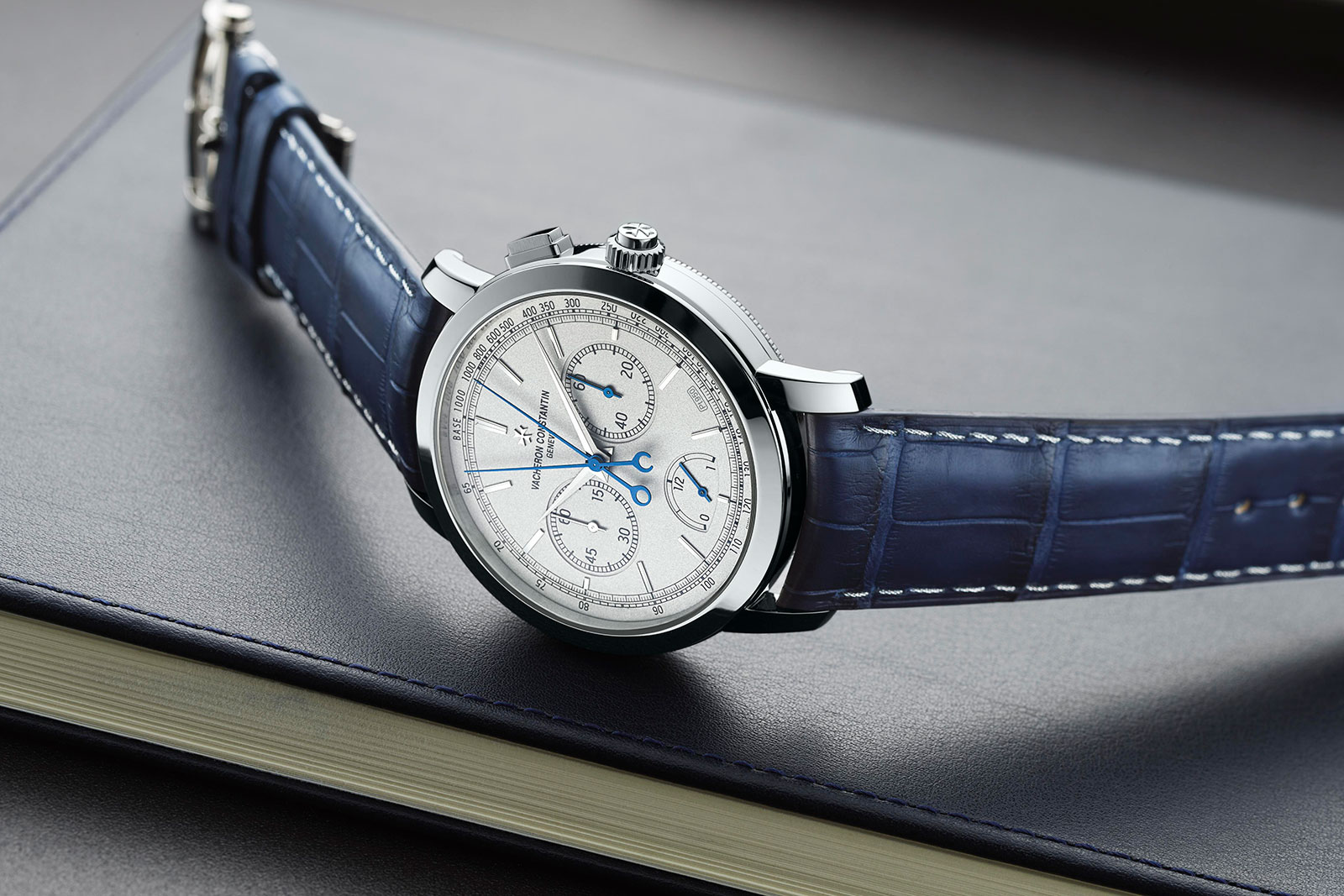 Made up of 473 parts, the cal. 3500 is visible through the display back. Despite being an automatic movement, the view is very much that of a traditional, laterally-coupled chronograph because of the peripheral winding mechanism.

The rotor takes the form of a ring with a semicircular, 22k yellow gold weight that surrounds the movement. It’s mounted on ball bearings and winds the mainspring via teeth on its inner rim that meshes with a tiny winding wheel that sits next to the balance wheel. 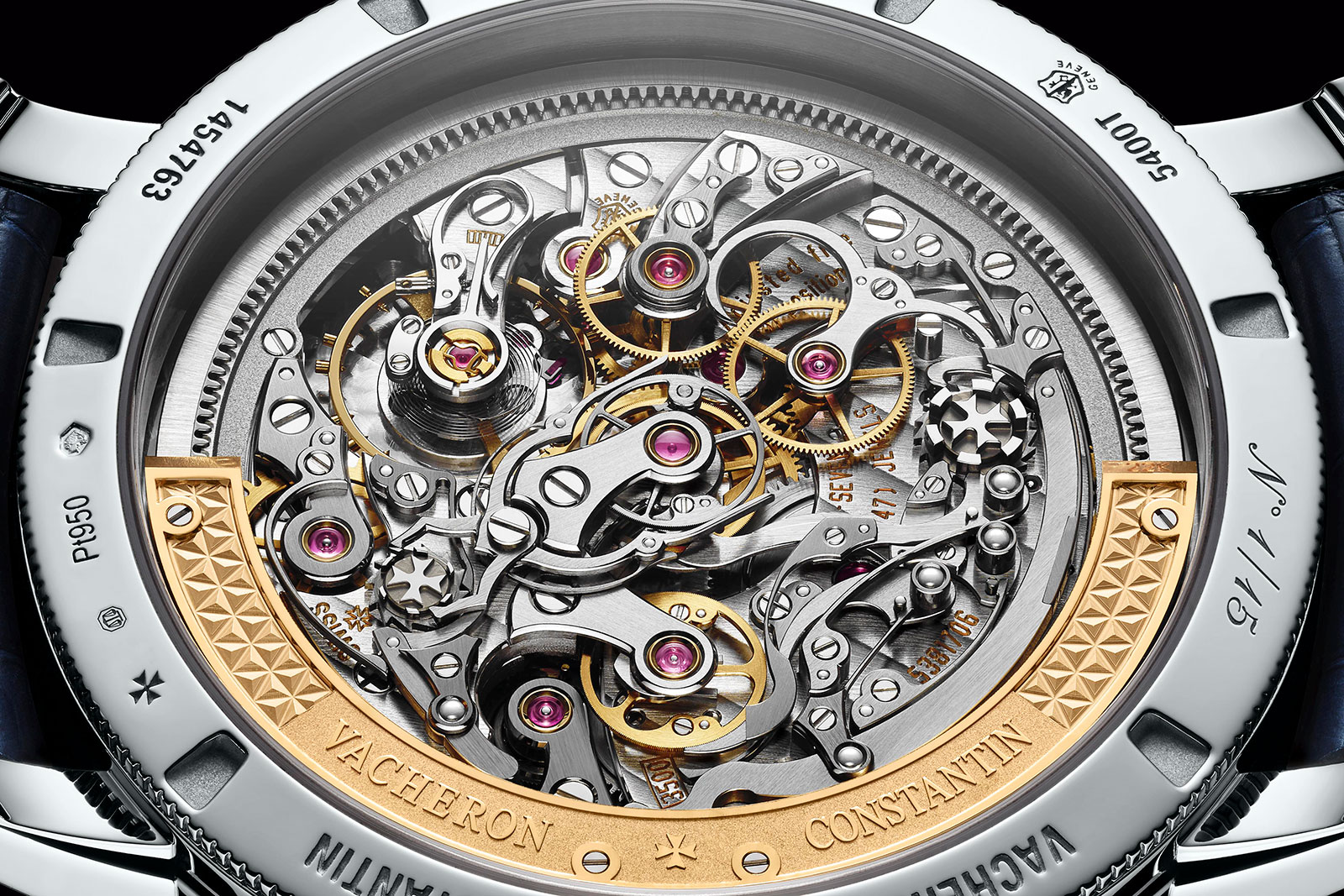 Limited edition: 15 pieces
Availability: Only at boutiques
Price: Approximately US$300,000