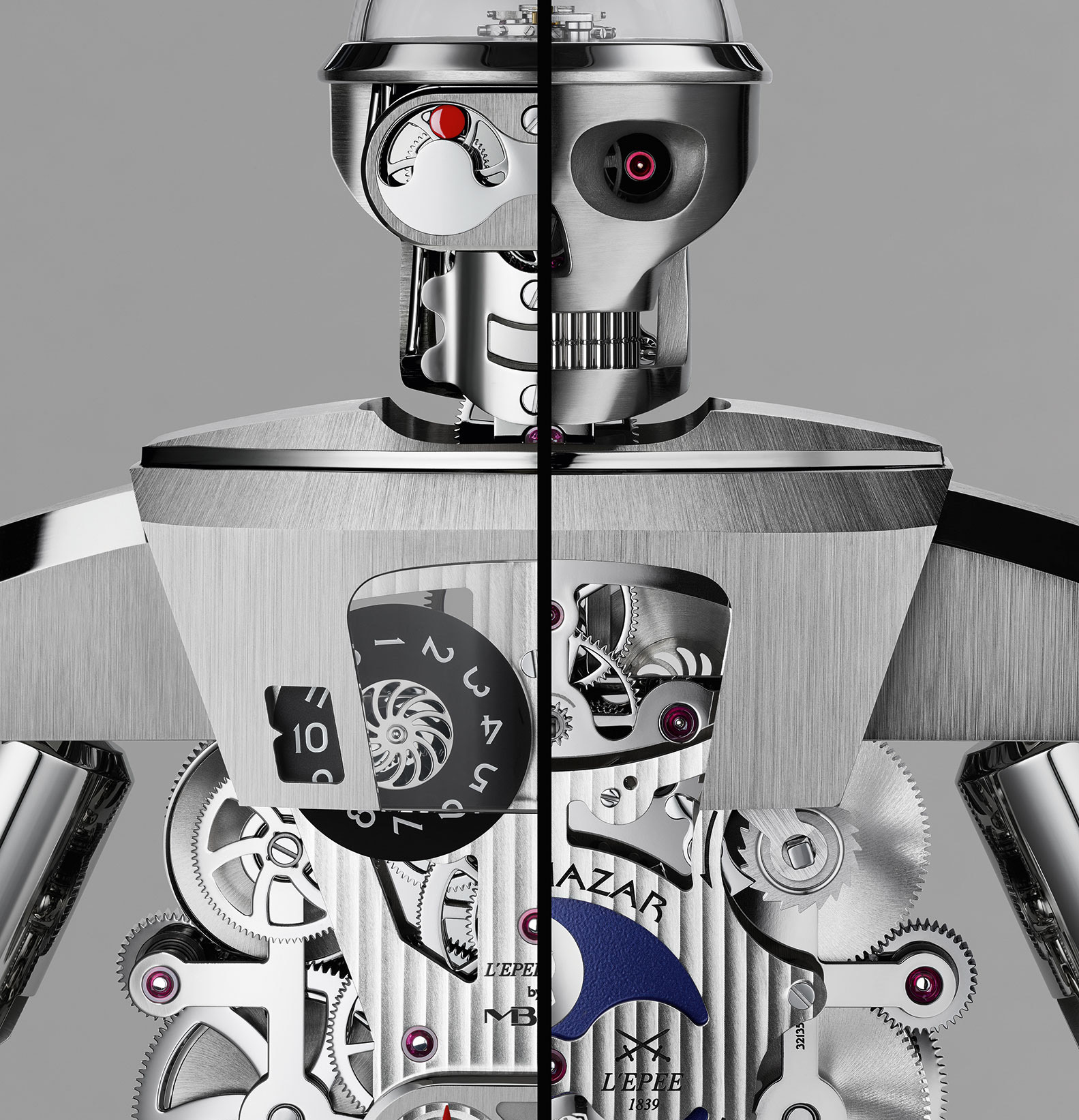 The creativity of MB&F has unleashed clocks shaped like spiders and space stations, and its latest continues on the same vein. It’s a boy’s toy that doubles up as power dressing for the desk: a table clock in the form of a robot that stands almost 40cm (or 16 inches) tall. A pivot in its torso allows the clock to swivel 180 degrees, turning from a smiley robot face to an expressionless skull.

Named Balthazar by its creator, Swiss horological entrepreneur Maximilian Büsser, the clock is wound and set with a key that’s part of the robot’s shield. On a full wind it’ll run for 35 days, just over a month, telling the time, days of power in store, as well as the moon phase. The largest clock MB&F has made to date – it’s a third taller than Melchior, the brand’s first robot clock – Balthazar is still manufactured by Swiss clockmaker L’Epee 1839, the same specialist that built all of MB&F’s other clocks. The friendly robot side indicates the time: jumping hours and sweep minutes via discs on the chest, with two red spheres in the robot’s eye functioning as 20-second retrograde indicators. And a smaller dial on the torso indicates the power reserve.

Swivel the robot around and the reverse indicates the moon phase on the torso with a double-hemisphere moon disc. Besides the swivelling torso, the robot’s arms are articulated for posing. Made up of 213 components, the robot body is variously nickel- or palladium-plated brass, as well as stainless steel. The movement is 405 components, mostly contained in the torso, though the beating heart of the mechanism is in the head, with the balance wheel visible under a polished glass dome. And just like on a fine watch, the parts of the clock are finished by hand, with polished or grained surfaces, as well as bevelled edges. 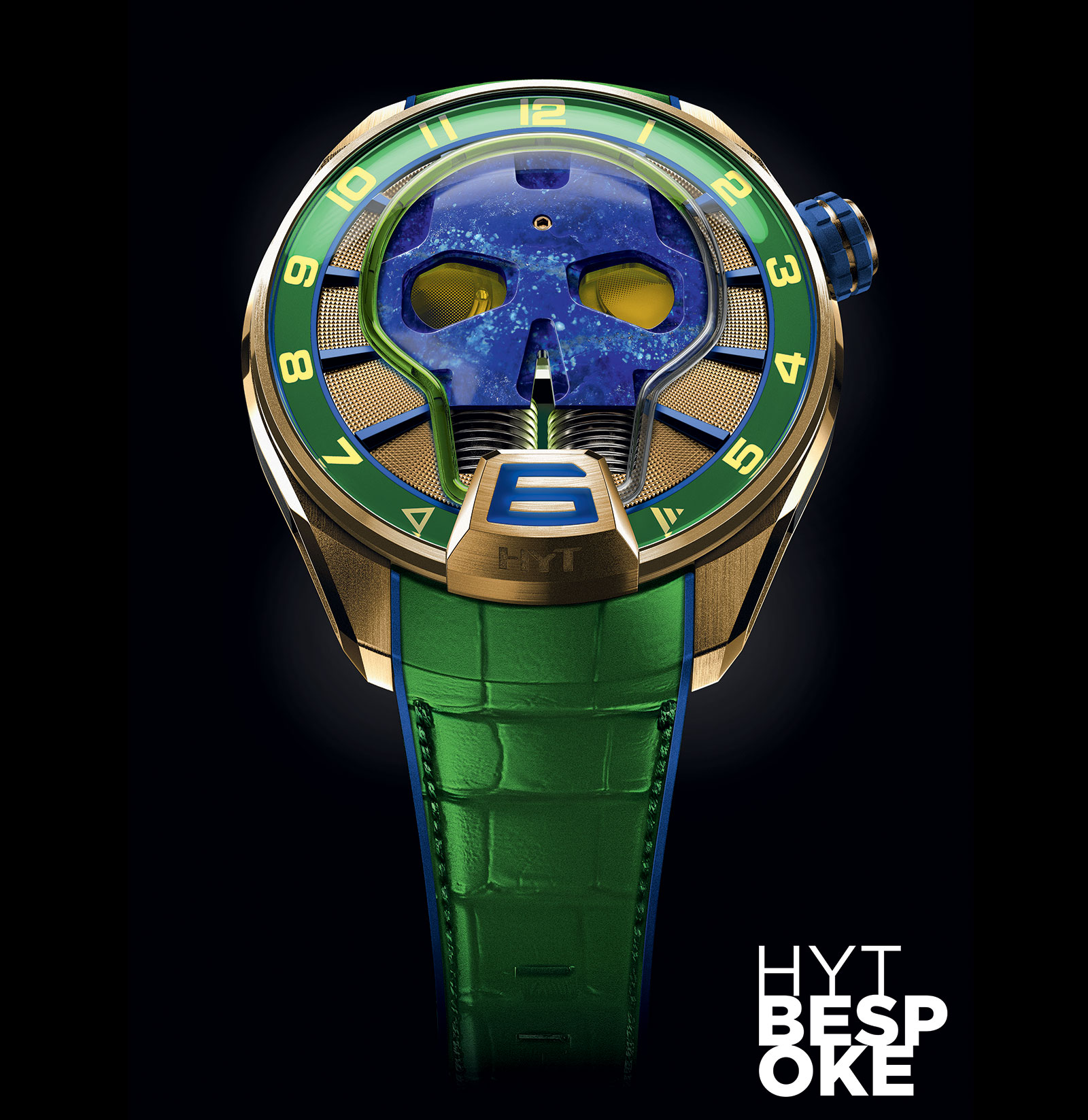 HYT Bespoke is all about customised, or custom-made, HYT wristwatches that are limited only by the client’s imagination or wallet.

A watchmaker that specialises timepieces that indicate the time via liquids in tiny glass vials, HYT is novel even amongst its peers in the world of avant-garde mechanical wristwatches. HYT Bespoke allows clients to indulge their horological fantasies.

The programme, as with many things, offers two levels of customisation. Bespoke One is the spare-n0-expense option where HYT will do whatever the client wants, from reshaping movement components to building an entirely new movement. It could be as drastic as an entirely new timepiece built from the ground up. Bespoke Two, on the other hand, is essentially about modifying existing models, changing colours, coatings, materials and engravings. This also encompasses the setting of precious stones on the case and movement, as the H3 above illustrates. This is akin to a suit based on an existing template, with minor tweaks for fit and style.

The HYT Skull Brazil pictured above is an example of a Bespoke Two product, being the existing Skull watch given a yellow and green makeover. 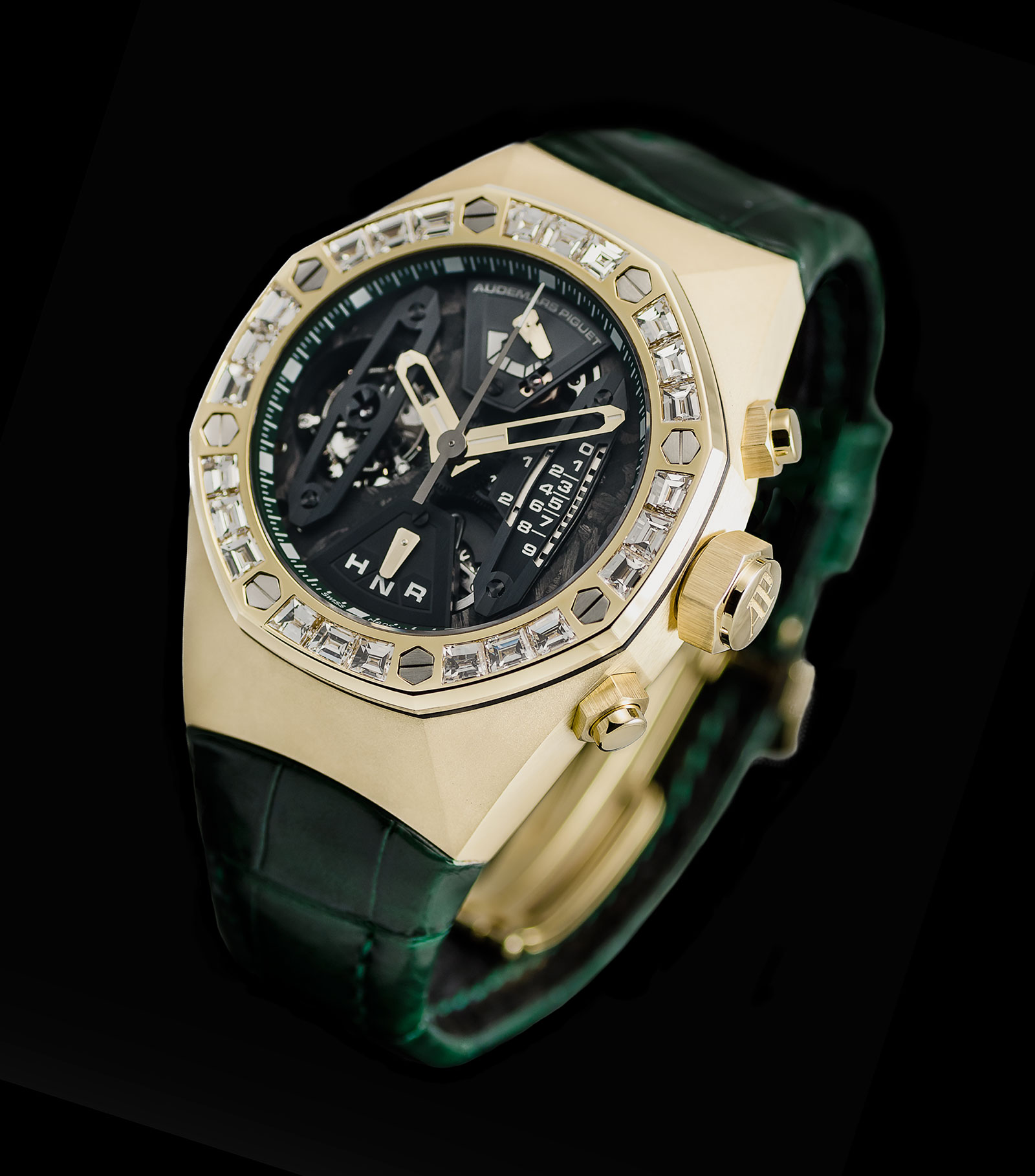 While yellow gold far less common than rose or white gold in contemporary watchmaking, AP has made the metal a focal point of the latest Royal Oak watches, with a suite of 2016 models in the metal, as well as a limited edition Royal Oak Extra-Thin “Jumbo” for The Hour Glass. Continuing the theme, the new Royal Oak Concept Tourbillon Chronograph is also exclusive to the same Singapore-based retailer. Fitted with a 5.66 carat diamond-set bezel, the 44mm case is entirely yellow gold, with the option of a diamond-paved case. All of the hands are yellow gold, with even the markings on the dial in a matching shade. It’s a look that’s a tad out of sync with the current economic climate, but one that’s different from the usual black and grey high-end complications. Hand-wound with near 10 days of power reserve, the Concept Tourbillon Chronograph has a tourbillon at nine o’clock and power reserve at 12. The scale on the right is a linear minute counter for the chronograph, which counts the seconds via a central seconds hand. The six o’clock indicator is for the function selector, indicating the crown position, a trademark of Renaud & Papi (the subsidiary of AP specialising in complications). And the baseplate of the movement is carbon composite, as are the bridges, explaining the marbled grey surface. The Royal Oak Concept Tourbillon Chronograph in yellow gold is a limited edition of five pieces, available at The Hour Glass.