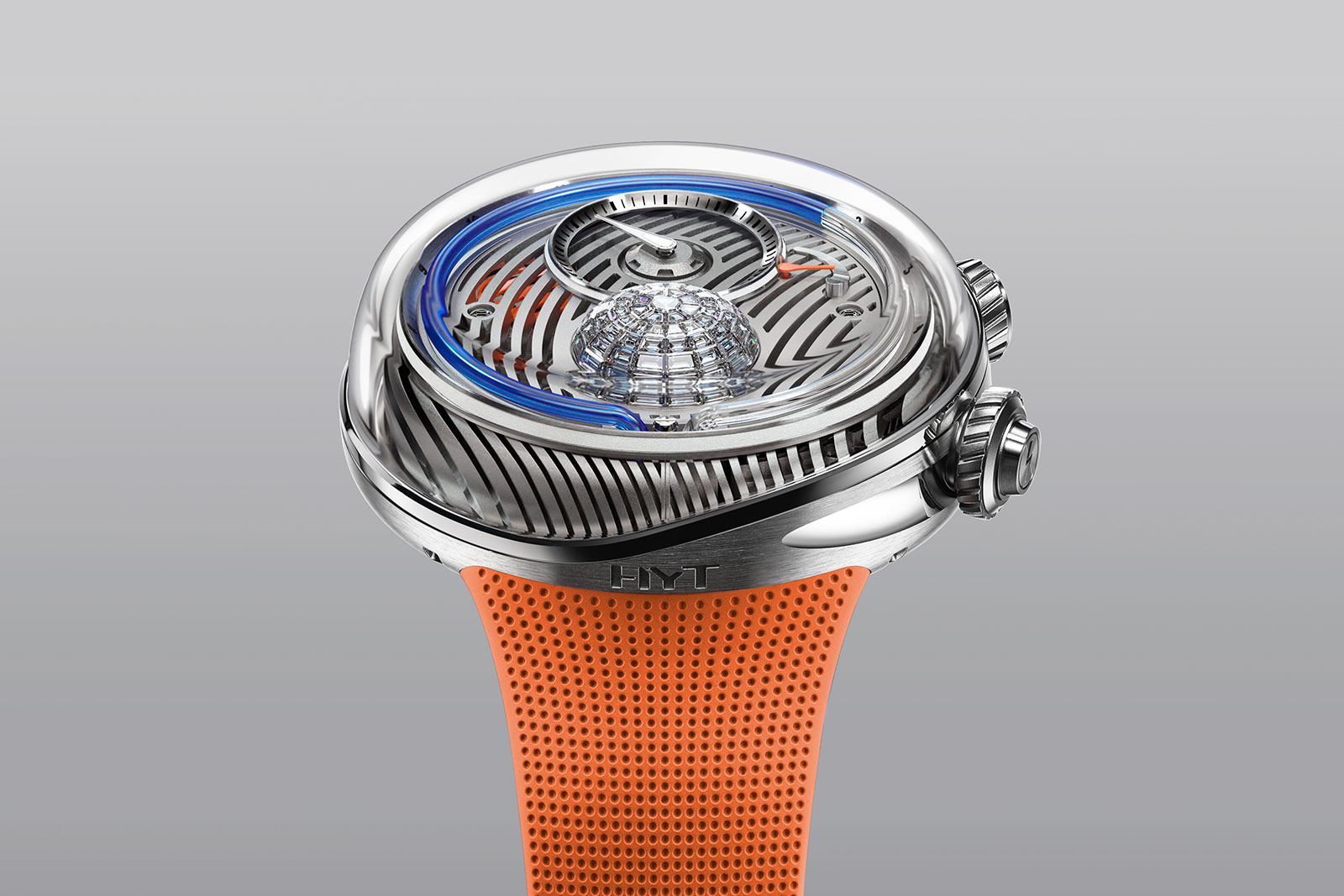 A pioneer in the hydro-mechanical display of time – where time is indicated by liquid in tubes – HYT has furthered its novel time display by lighting up the liquid display. Not merely with luminescent paint as is convention, but with dynamo-powered LEDs. First installed in the H4 of 2016, the illuminated-liquid display now returns with the sleek HYT Flow.

Contained in a rounded, almost organic case with sweeping lines on the dial, the Flow features an LED at six o’clock. It launches with two versions: the simpler one having a a light ring around the aperture at six, and the other – which is more lavish and interesting – is equipped with lights underneath a dome set with baguette diamonds. 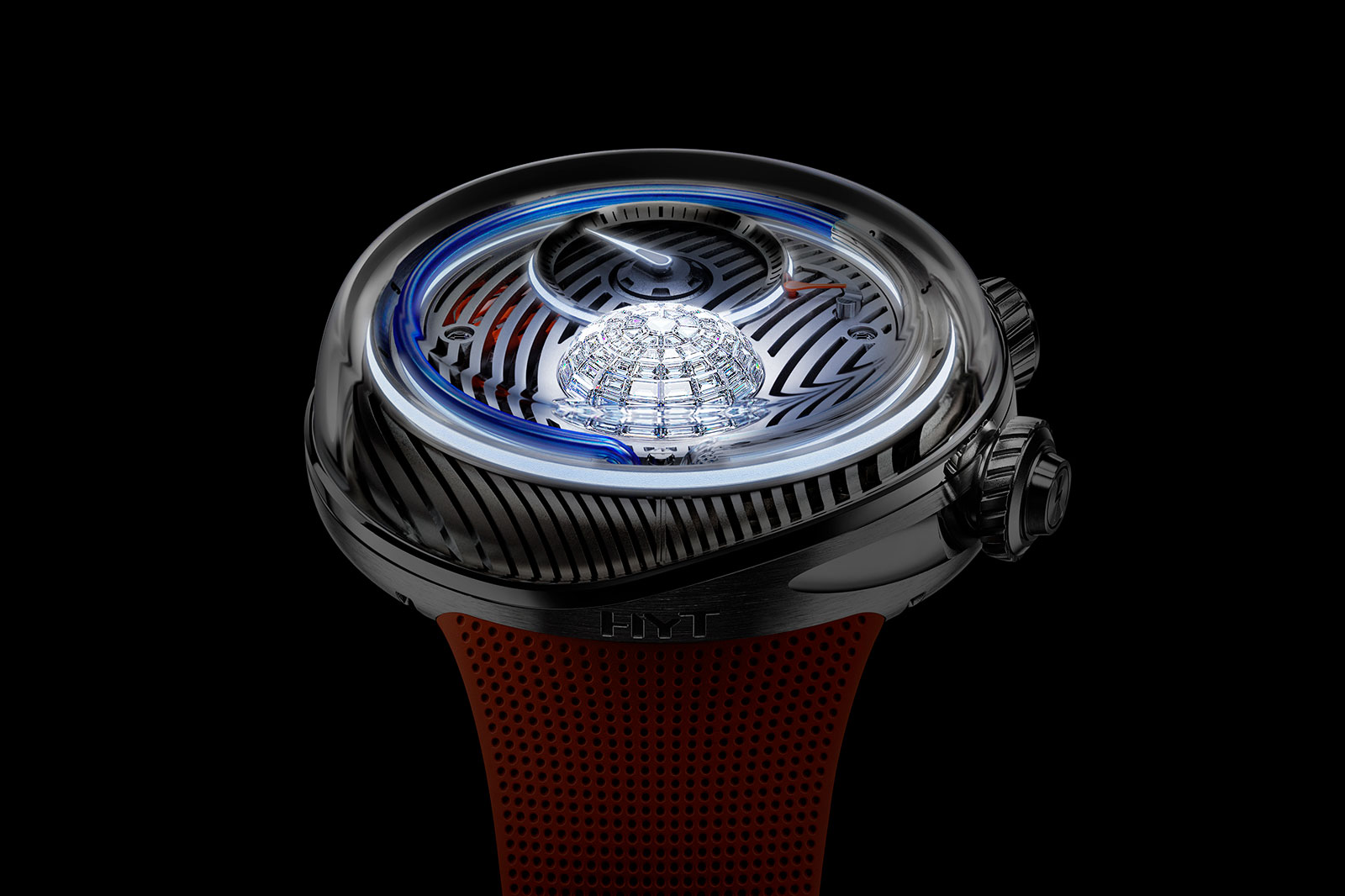 While LED lighting is not new, it remains the highlight. It is definitely not something conceived for functionality and legibility in the dark, but instead as a complication with brilliant visual appeal. The diamond-set variant, in particular, offers a stunning light show thanks to the highly refractive and reflective nature of the gemstone – albeit at a steep price of well over US$160,000. 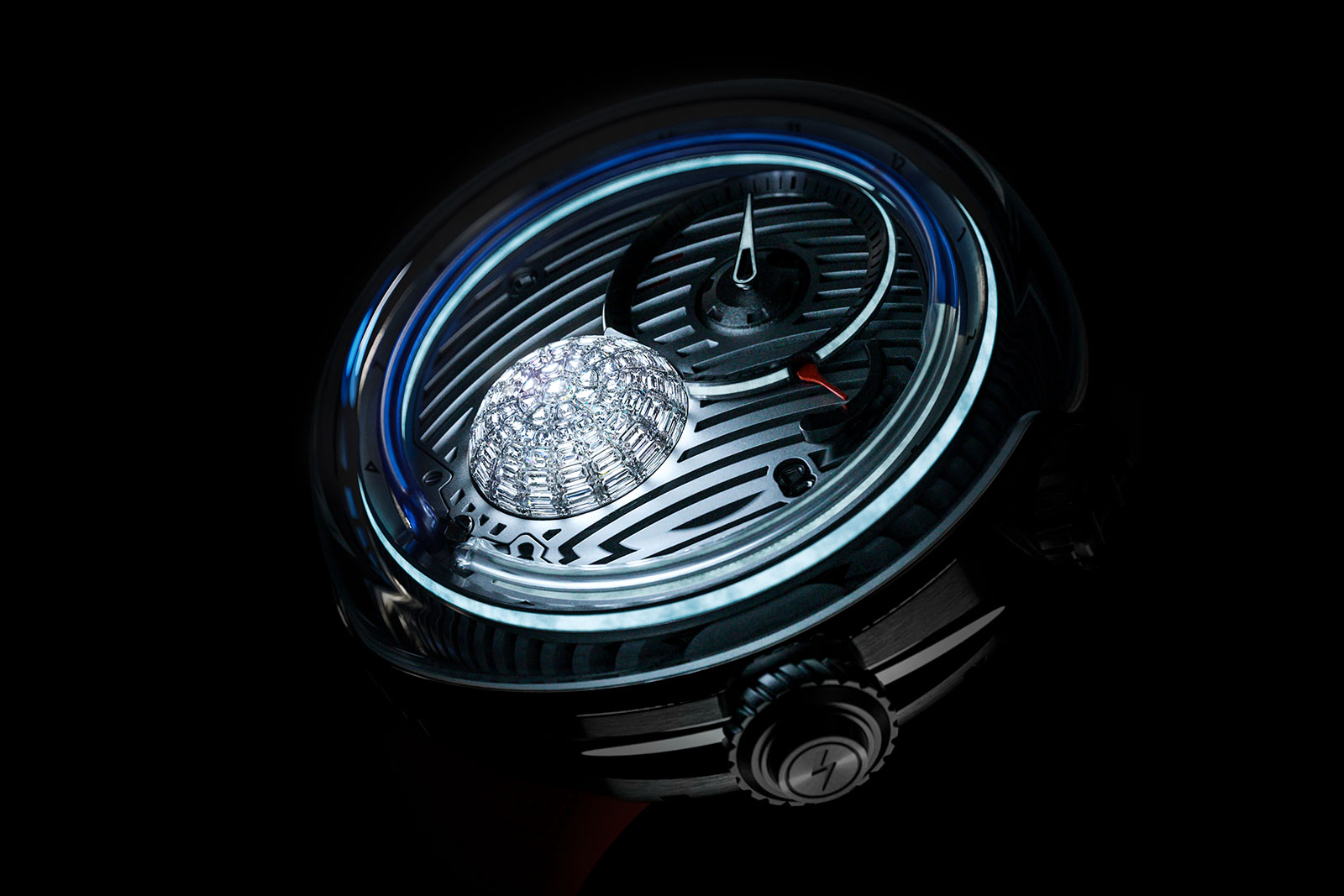 Functionally the Flow remains similar to its predecessors, but the entirety of the design has streamlined compared to the angular styling of the brand’s earliest watches. The case is rounded, with lines that flow, which is complement by the open-worked wave pattern on the dial.

Crucial elements like the minute hand and power reserve indicator are on the dial, while the turbine-shape running seconds sits below the wave-pattern surface. Notably, the dial does not reveal the bellows mechanism that drives the liquid hour indicator, but the overall look is elegant-sci-fi and appealing.

The only shortcomings of the watch are the same as those for preceding models: the watch is big and fairly expensive, and long-term serviceability is a question. But the Flow, like the rest of HYT’s line up, is a truly novel take on horology, which mean conventional yardsticks probably matter less. 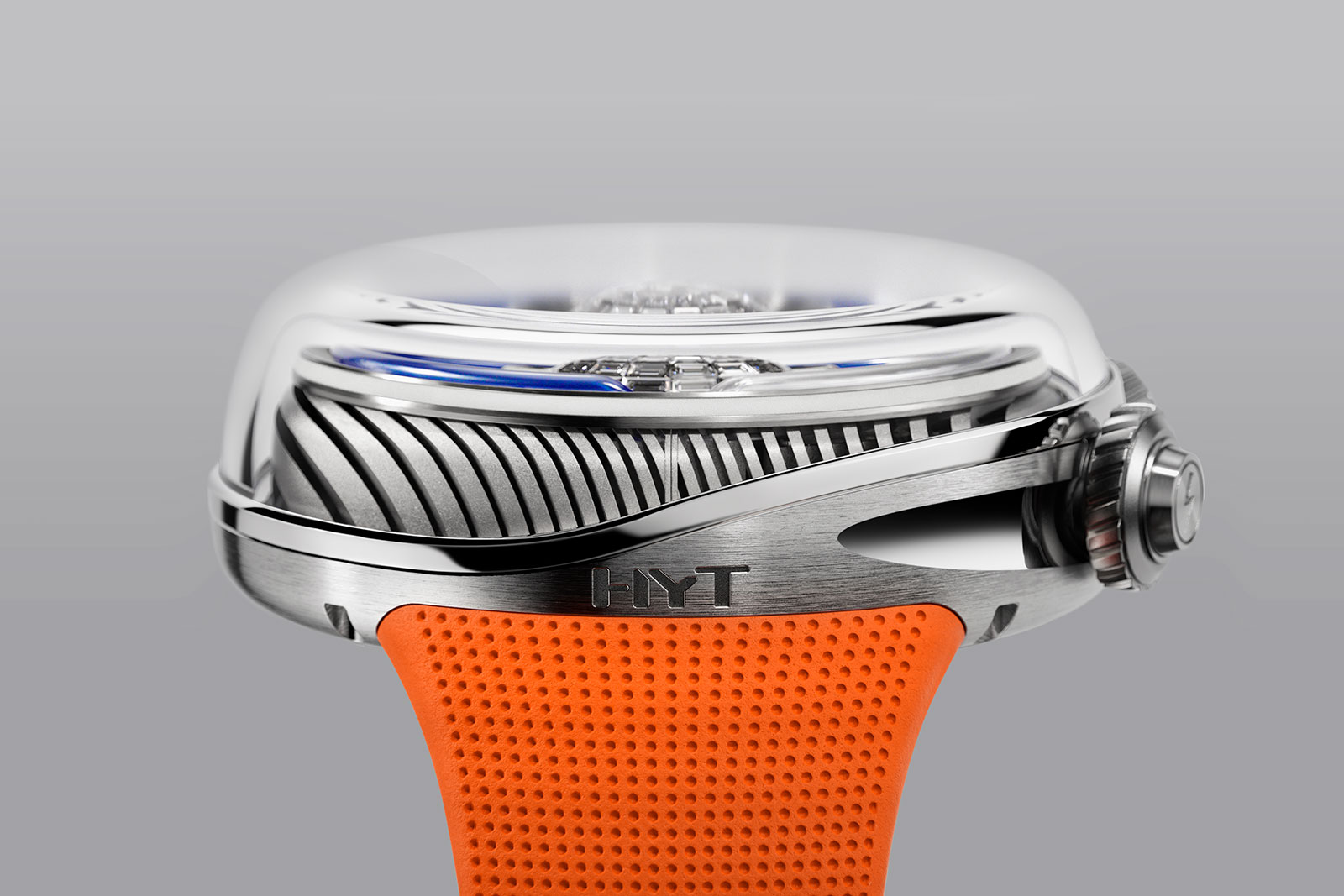 A modern take on the classics

Thought not obvious at first, but the dial layout is a contemporary interpretation of classical horological ideas. For instance, the boundary between the coloured and clear liquid advances around a glass tube to indicate the hours, and reverses direction to flow backwards quickly once it completes its path – a liquid retrograde hour display. And it is also a regulator-style display, with the minute hand at twelve o’clock and running seconds at nine.

And the light display is perhaps a modern take on the automaton. To generate electricity, the crown at four o’clock is wound, which rotates an electrical coil in a magnetic field to induce current. Pushing the button on the top of the crown activates the LEDs for about eight seconds, after which the mechanism requires winding once more. 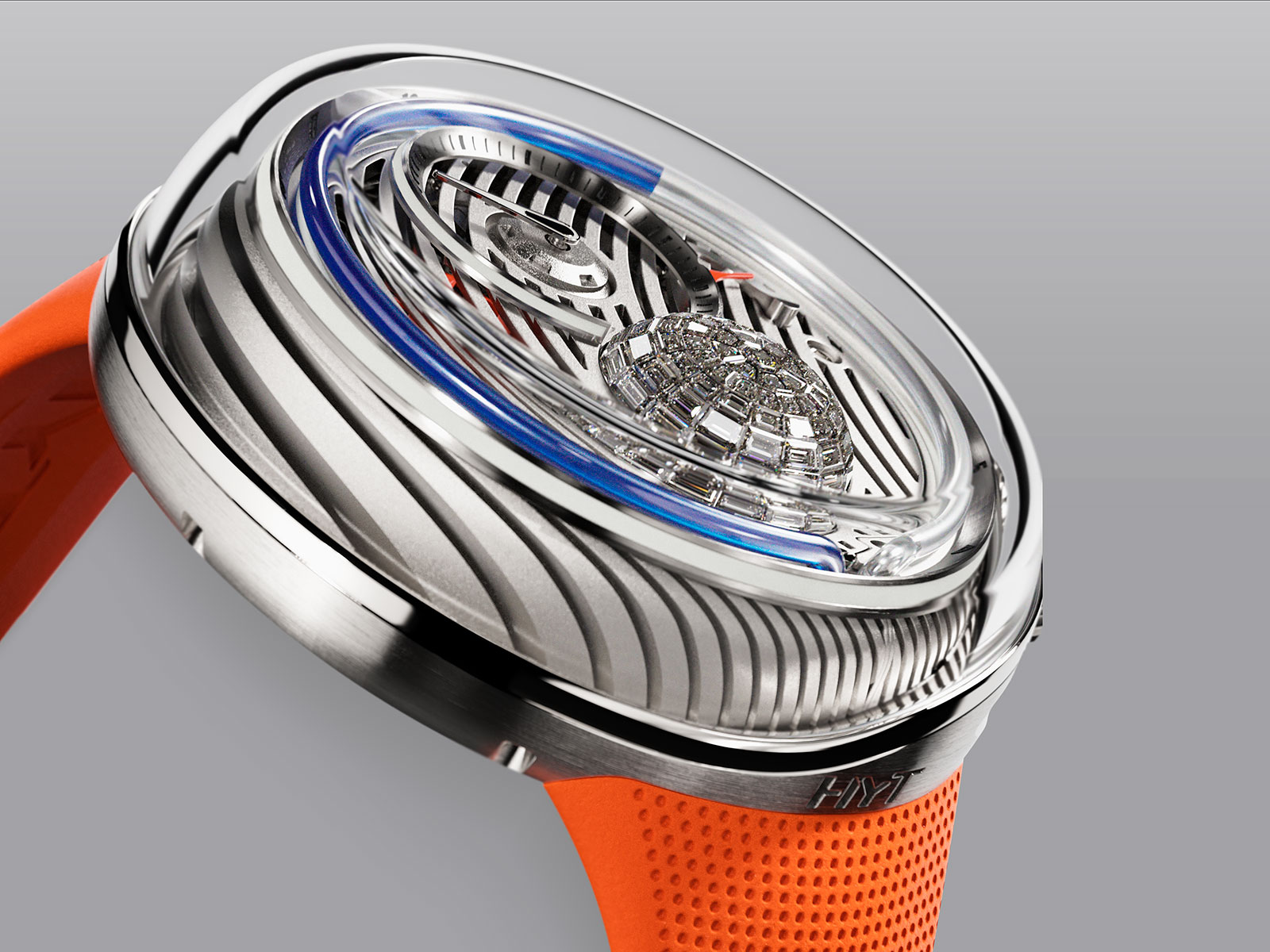 Underneath the dial is a manual-wind movement that has a 65-hour power reserve. Like a conventional movement, it has a balance assembly and gear train, but combined with the liquid-display mechanism made up of a pair of bellows that move the two immiscible liquids. 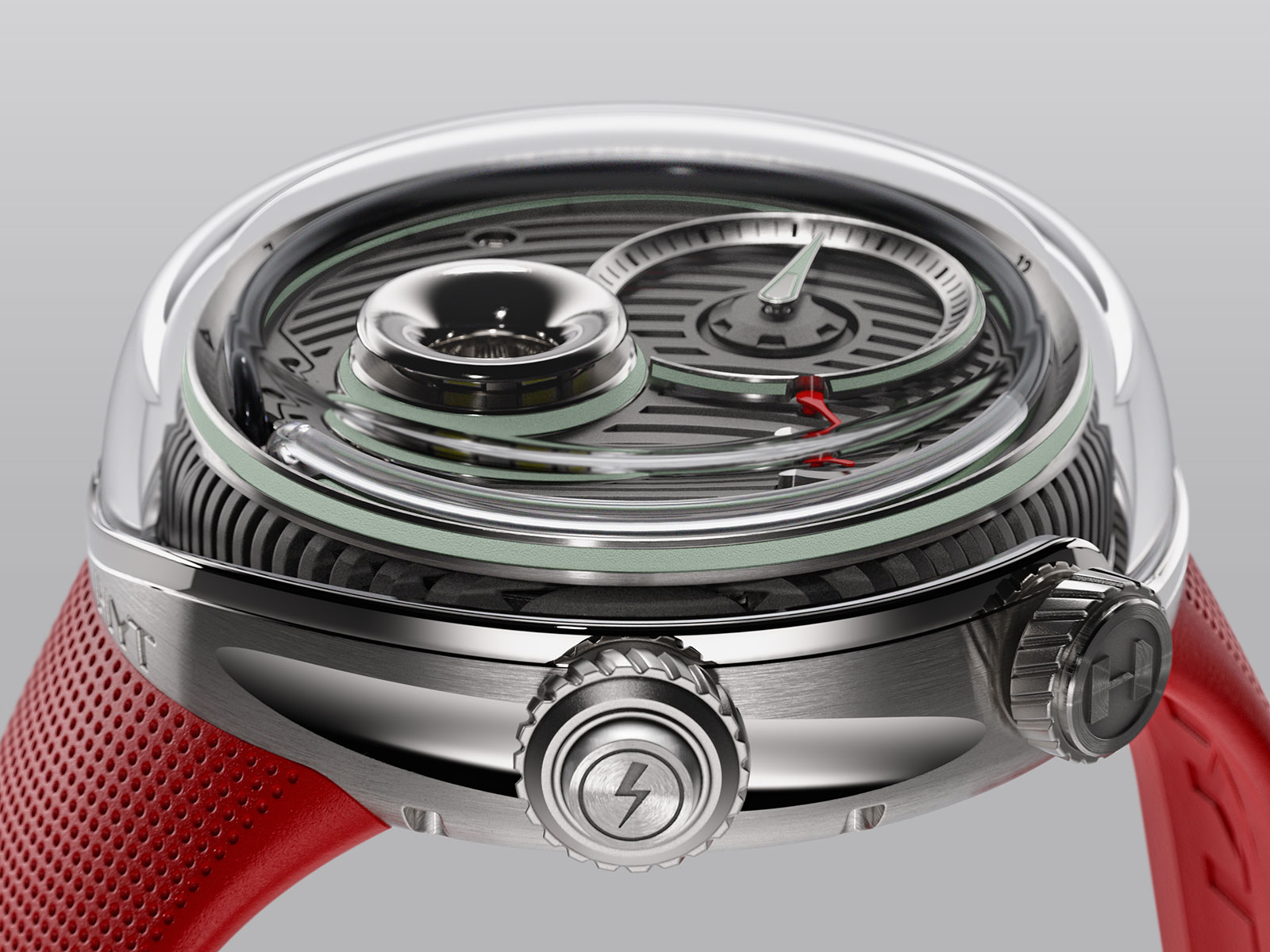 The finishing is attractive and suited to the style of the watch, but not spectacular for the price – it is fine and neat but largely mechanically applied. The gilded wheels constrast well with the darkened and frosted bridges, and the bevelling is a nice touch. 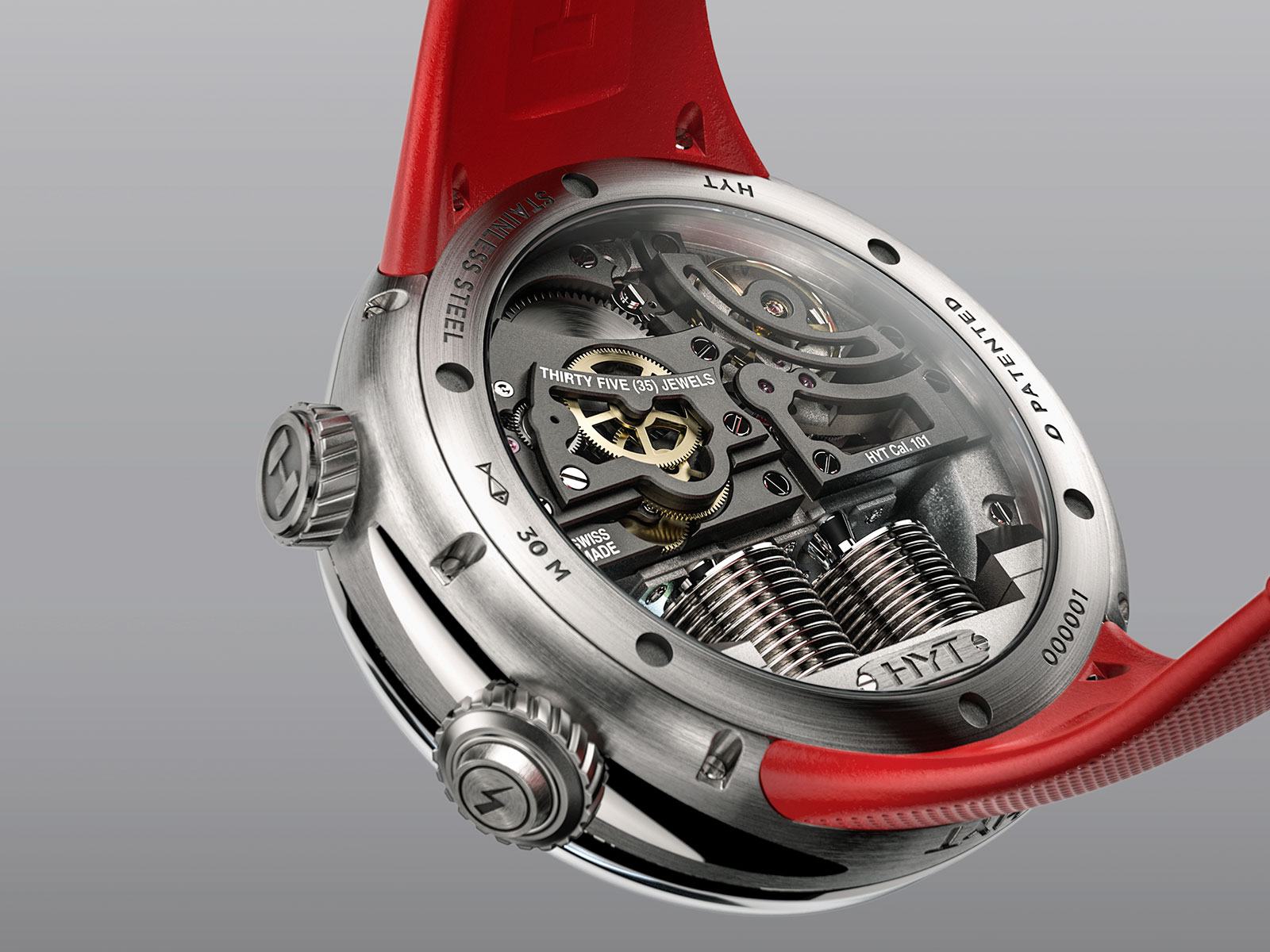 Create the hydro-mechanical wristwatch of your dreams with a custom HYT.