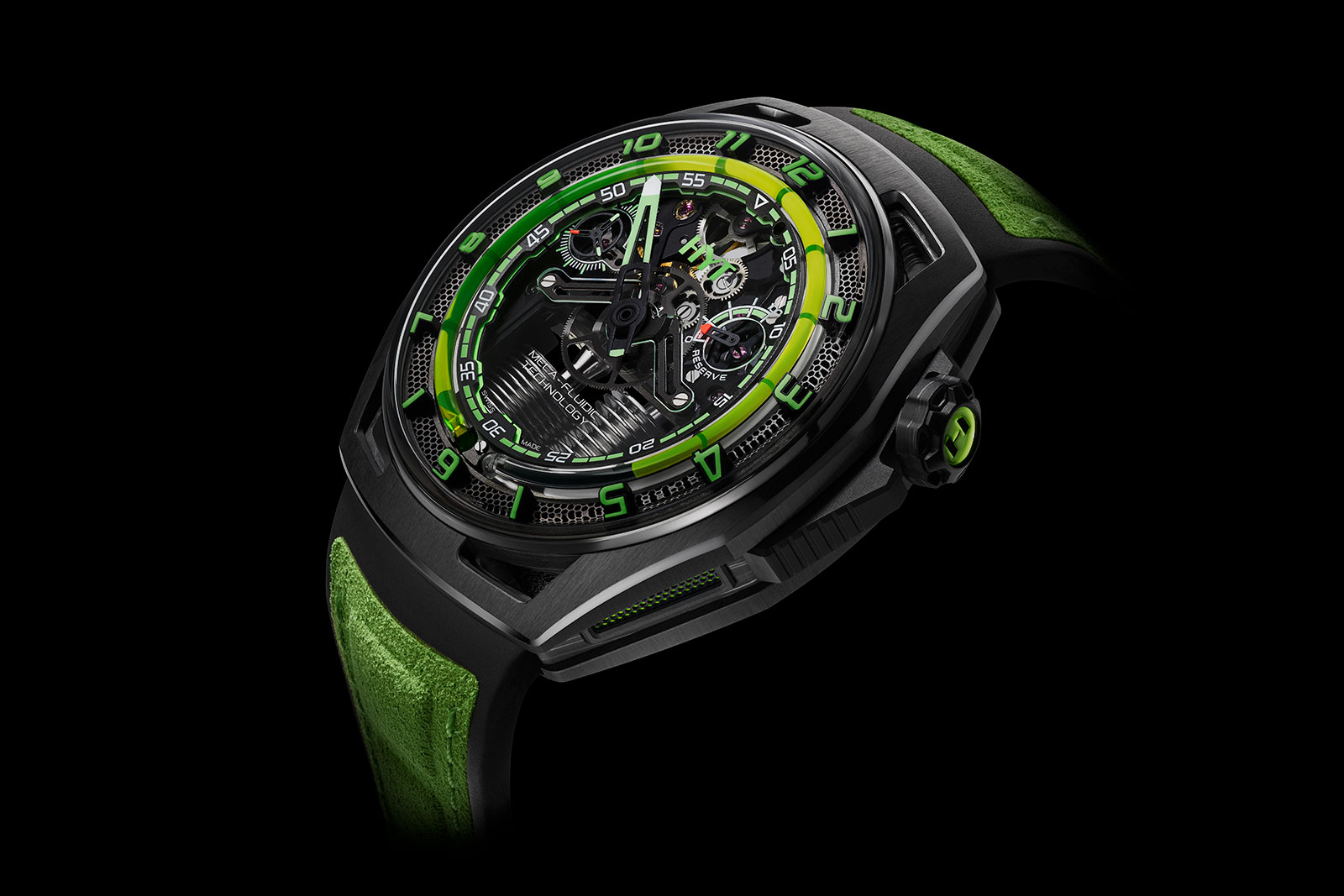 Having been the first – and still the only – watchmaker to use liquid to display the time, HYT went bust last year, having struggled for several years after its 2012 debut.

But now the brand is making a comeback with Davide Cerrato at the helm. The inaugural watch of the reborn HYT is the Hastroid Green Nebula that is dressed in brand’s familiar livery of lime green and black. 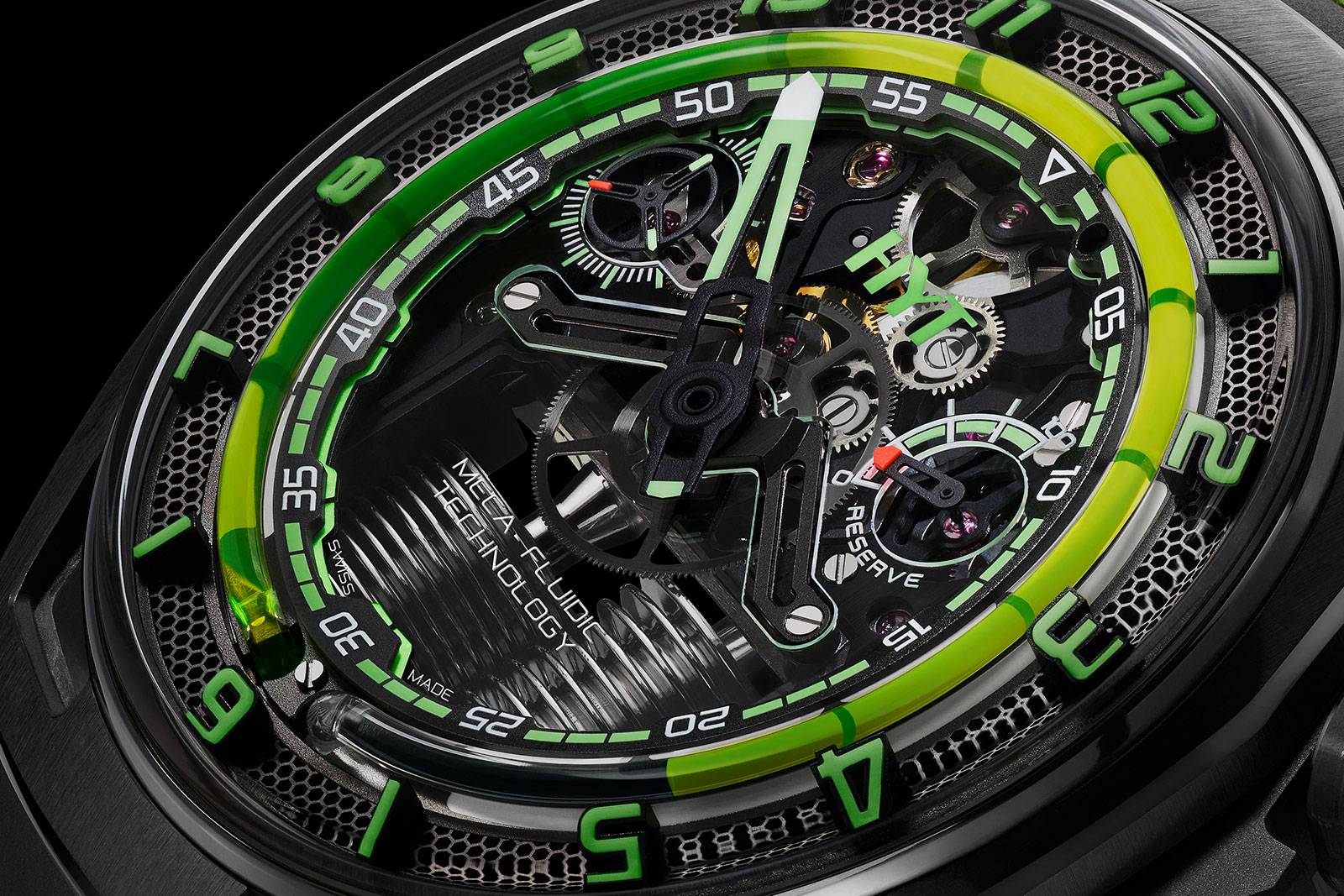 Best known for being the design chief at first Tudor and then Montblanc, Mr Cerrato has applied his brand of Italian aesthetics to HYT, preserving its signature style while streamlining and downsizing the watches.

Still large, but slightly thinner and definitely sleeker, the Hastroid continues the familiar formula found on most previous HYT watches – hours are indicated by a retrograde fluid indicator within a glass tube, while two large bellows are responsible for pumping the fluid indicator back and forth. 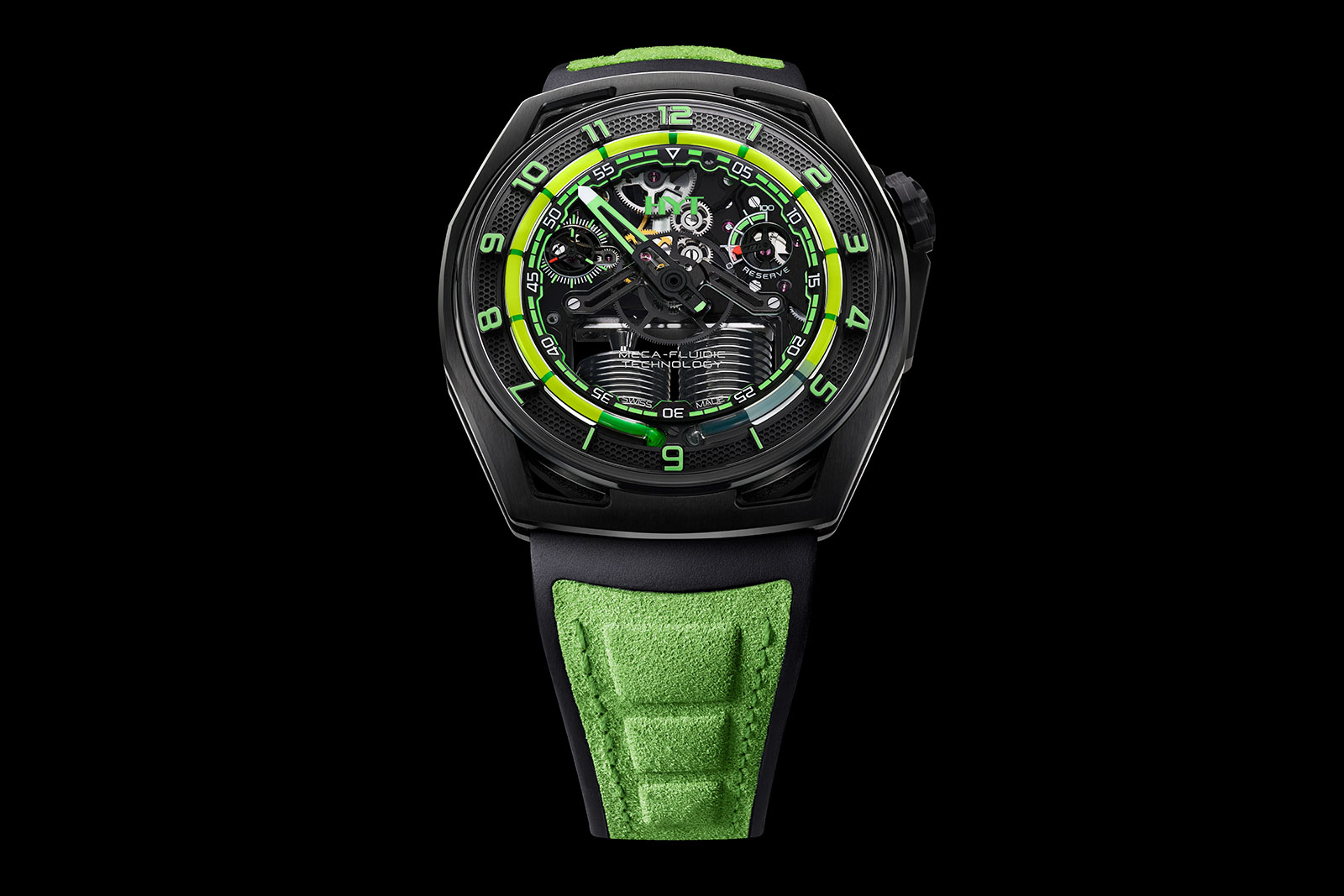 I was sceptical when I first heard that HYT was back from the dead, but knowing that Mr Cerrato is leading the charge certainly increases the odds of success.

He did a stellar job shaping the visual identities of both Tudor and Montblanc – both of which still have the same house style today – and has certainly refined the HYT wristwatch while retaining its familiar feel. 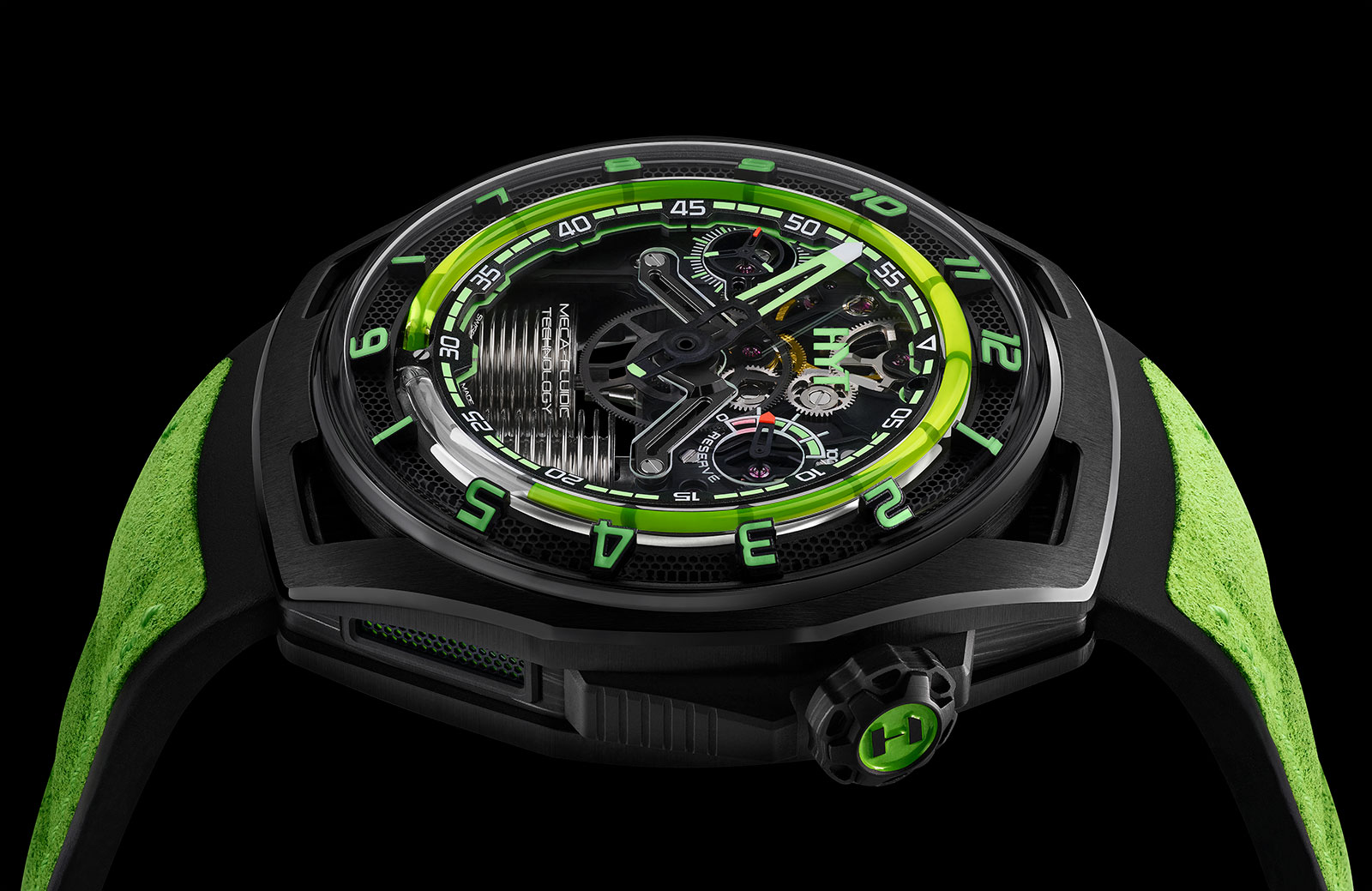 The Having seen a resin mockup of the Hastroid, I can attest to the fact that the watch is more compact and slightly more wearable than a first-generation HYT.

At the same time, Mr Cerrato has given the design a slightly retro flavour. Although the look is still predominantly the techno-industrial style that defines many contemporary high-end watches today (think Richard Mille and Hublot), details like typography feel vintage – the look is best described as a 1970s sci-fi film.

At CHF70,000, the Hastroid is priced similarly to earlier HYT models, which is fair enough but not quite a value proposition. However, the new watches will be more reliable according to Mr Cerrato, as they are powered by an entirely new calibre. 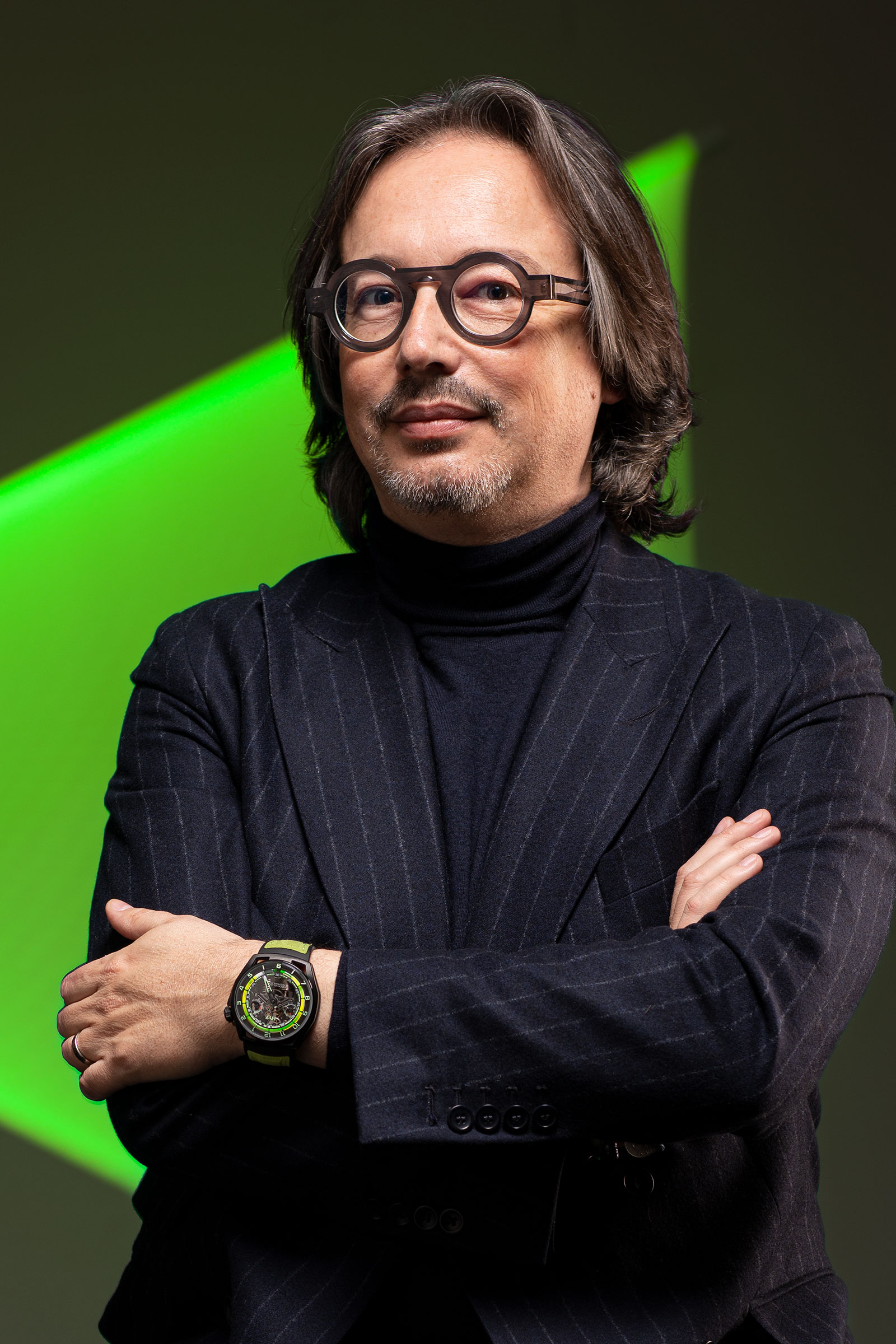 The Hastroid utilises the same retrograde display found on the original generation of HYT watches – but with a few notable upgrades. For one, the movement relies on the same principles as earlier generation watches, but it is a new calibre developed by TEC Ebauches, the specialist whose star engineer is Eric Coudray, who is most famous for inventing the Jaeger-LeCoultre Gyrotourbillon.

At the same time, legibility has been improved in several ways, amongst them being the markers on the glass tube that doubles up as a hour scale. This works in tandem with large Arabic numerals around the tube that give the face an instrument-like appearance. 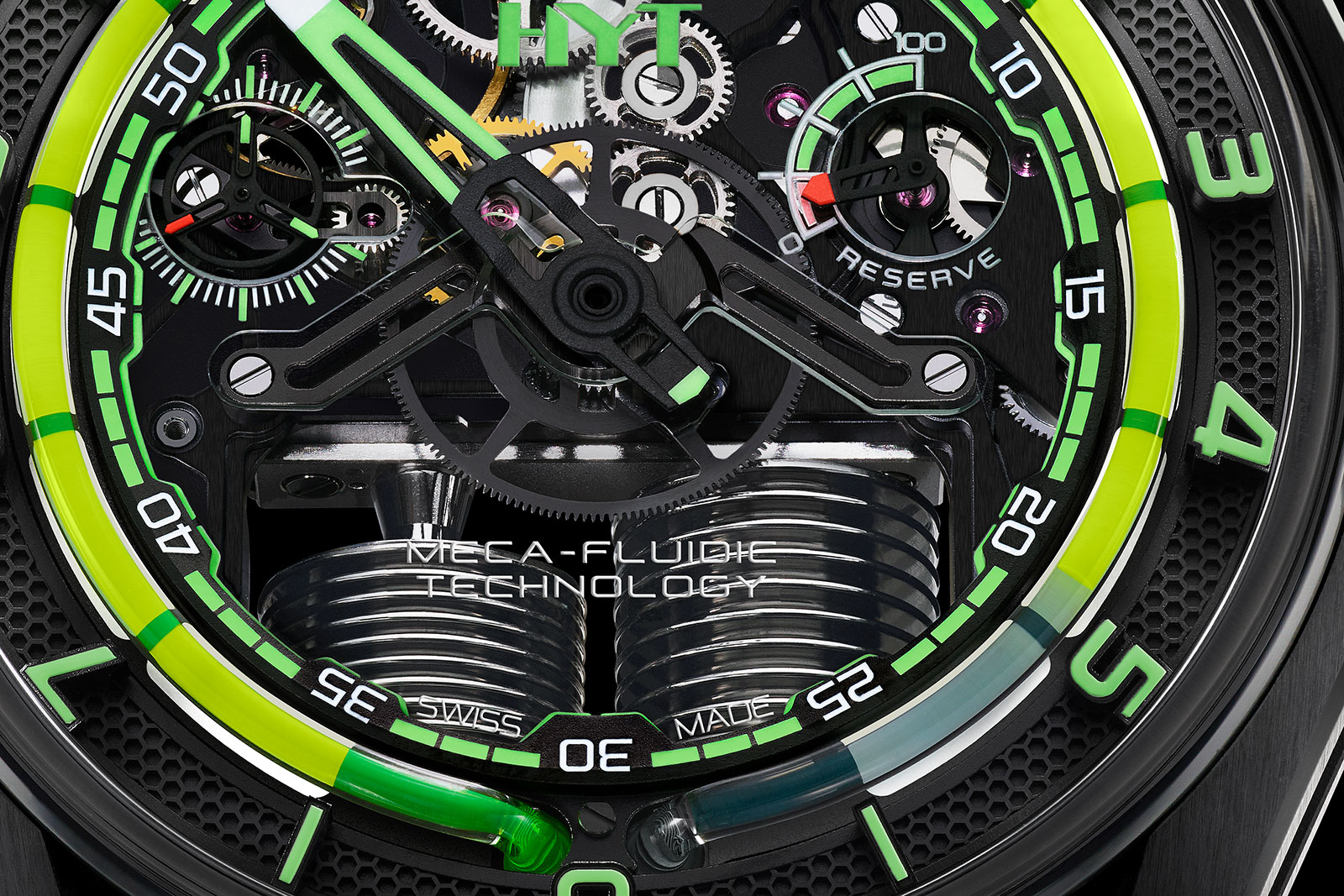 Beyond the liquid display, the Hastroid and the followup models are distinguished by the modular case that is customisable in terms of texture, colour, and material.

The front and back plates are separate pieces, as is the case middle, which further contains honeycomb inserts and other removable bits. The various elements of the case can be varied for a range of different looks.