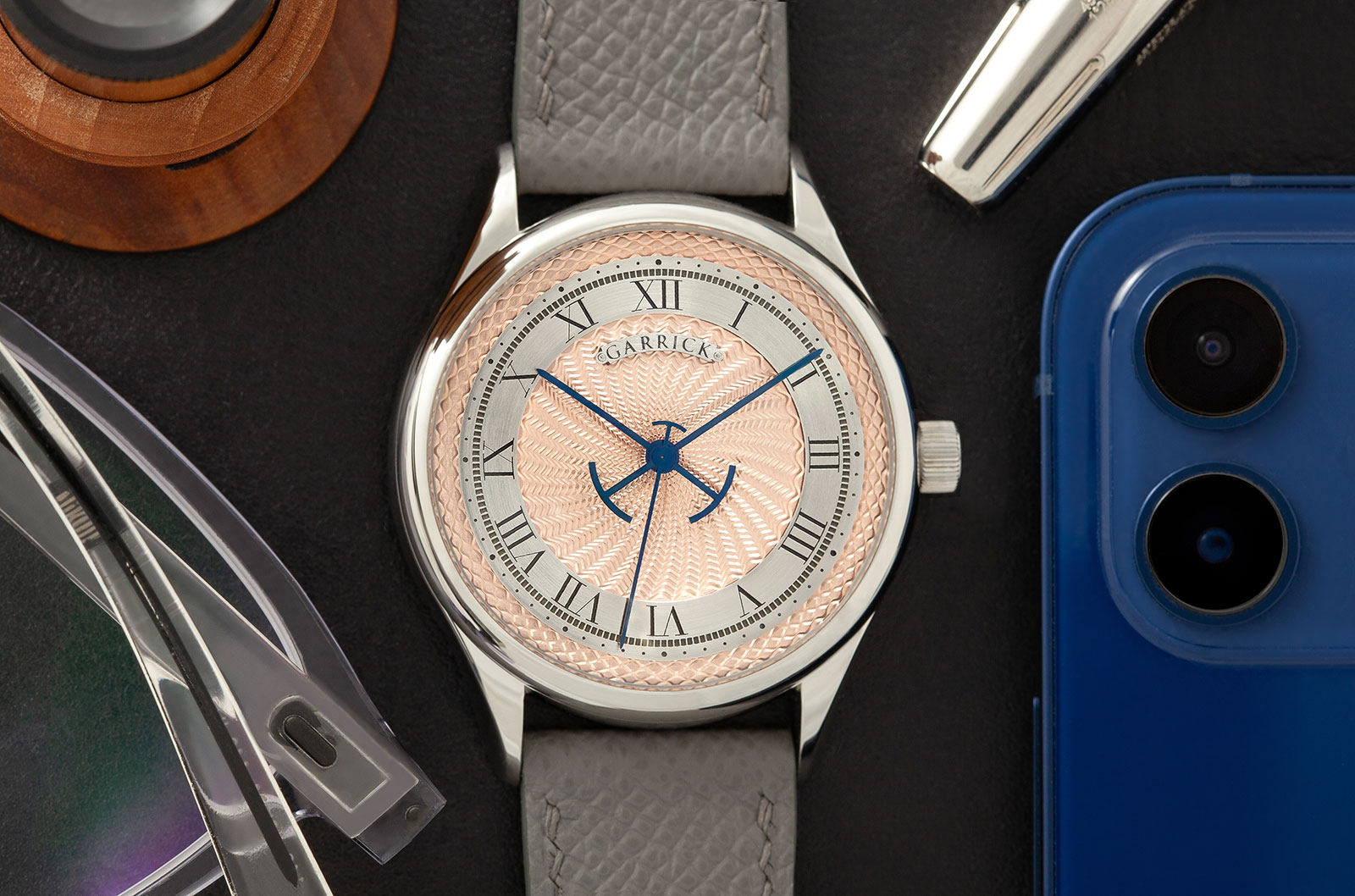 Having debuted an elaborately open-worked watch in 2014 and then applied its trademark style to something more basic, Garrick has just unveiled its fifth model to date, the S5.

Retaining the quintessential elements of Garrick, namely a guilloche dial with Roman numerals and hands with an uncommonly large counterweight, the S5 is essentially a smaller and simpler iteration of Garrick’s earlier models, but it’s an all-new watch in a technical sense.

Equipped with a new, in-house movement, the S5 sets itself apart from its predecessors with compact dimensions that make it Garrick’s smallest to date. 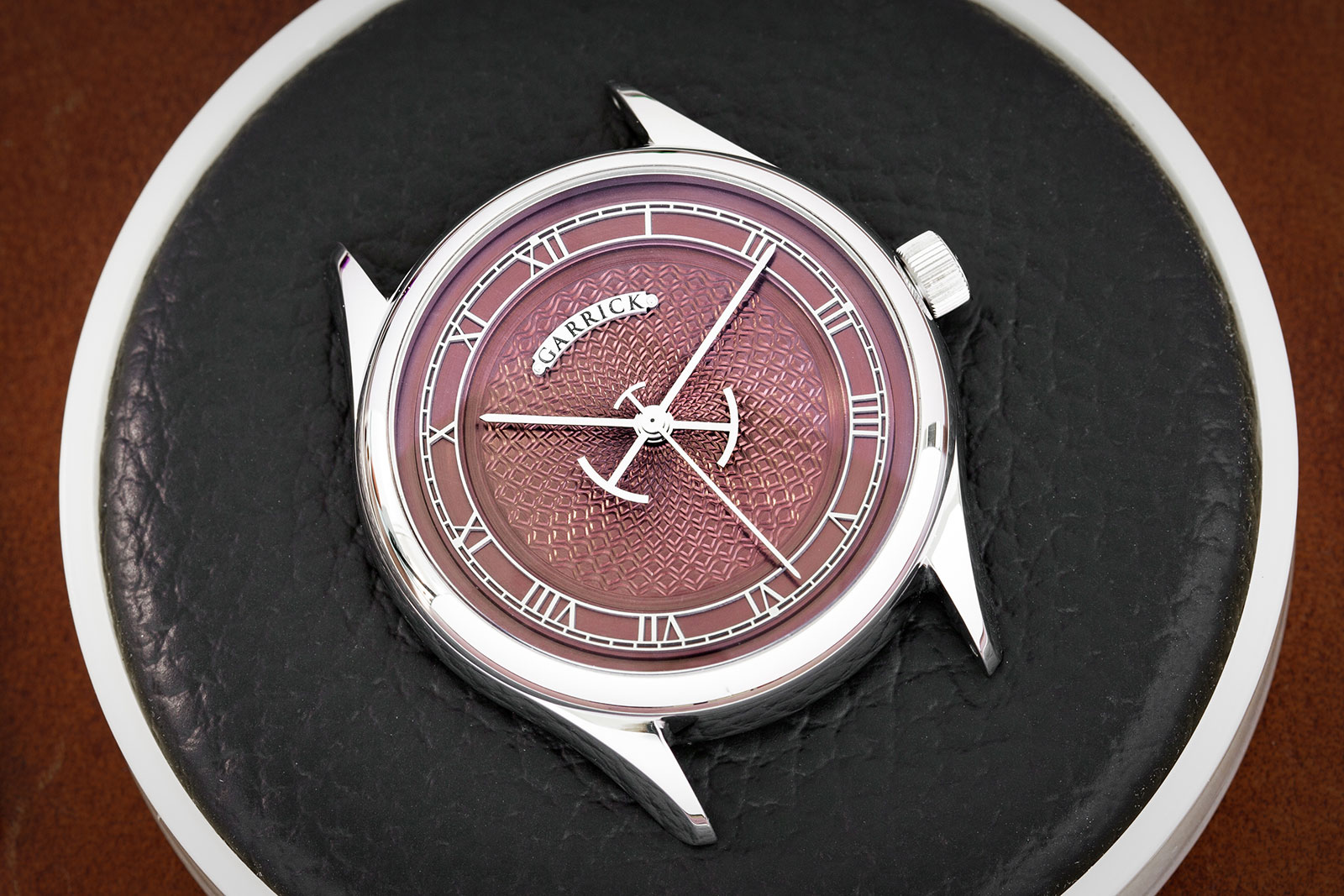 The proportions of the S5 are its primary point of appeal. It’s only 39 mm wide and 8 mm tall, making it substantially smaller than the brand’s previous offerings.

Those were all 42 mm in diameter, making them too large for the largely elegant and traditional aesthetic. And the large case size also brought to mind similarly styled but less expensive watches equipped with Unitas movements. 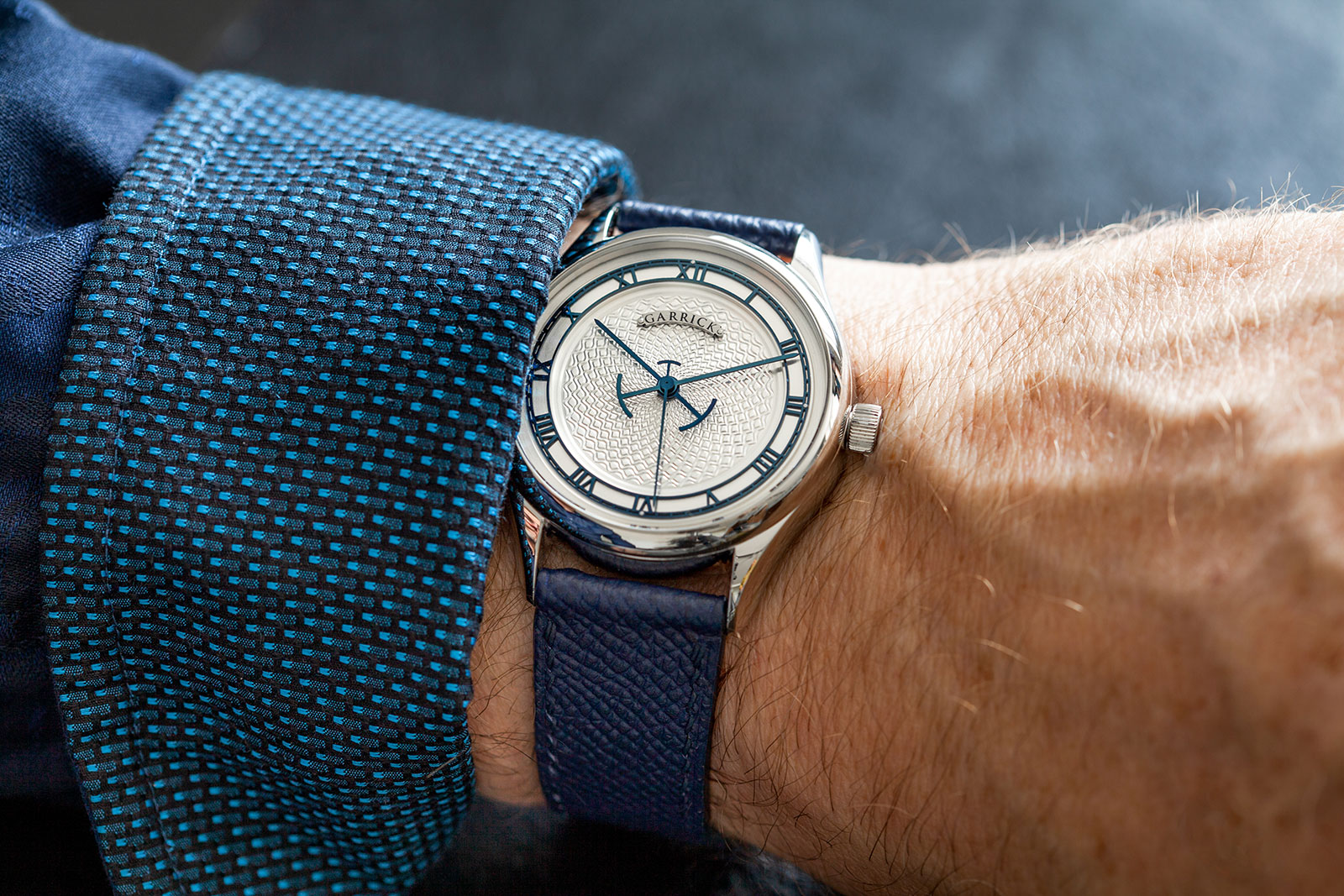 Along with the reduced size, the S5 is also the brand’s most minimalist watch so far and the first with centre seconds.

Given that Garrick’s earlier models all had subsidiary seconds, the centre seconds (and the smaller diameter) makes it clear that the movement within the S5 is different. It is indeed a new calibre, albeit one that wasn’t originally constructed with a centre seconds, which requires means a secondary train was required to reposition the seconds.

While the S5 got size and style right, it is less of a value proposition compared to Garrick’s other models. It costs about US$19,600, making it three times as expensive as the S4, which is ETA-powered but similar in finish and design. Admittedly, the proprietary movement does add considerably to its appeal somewhat. 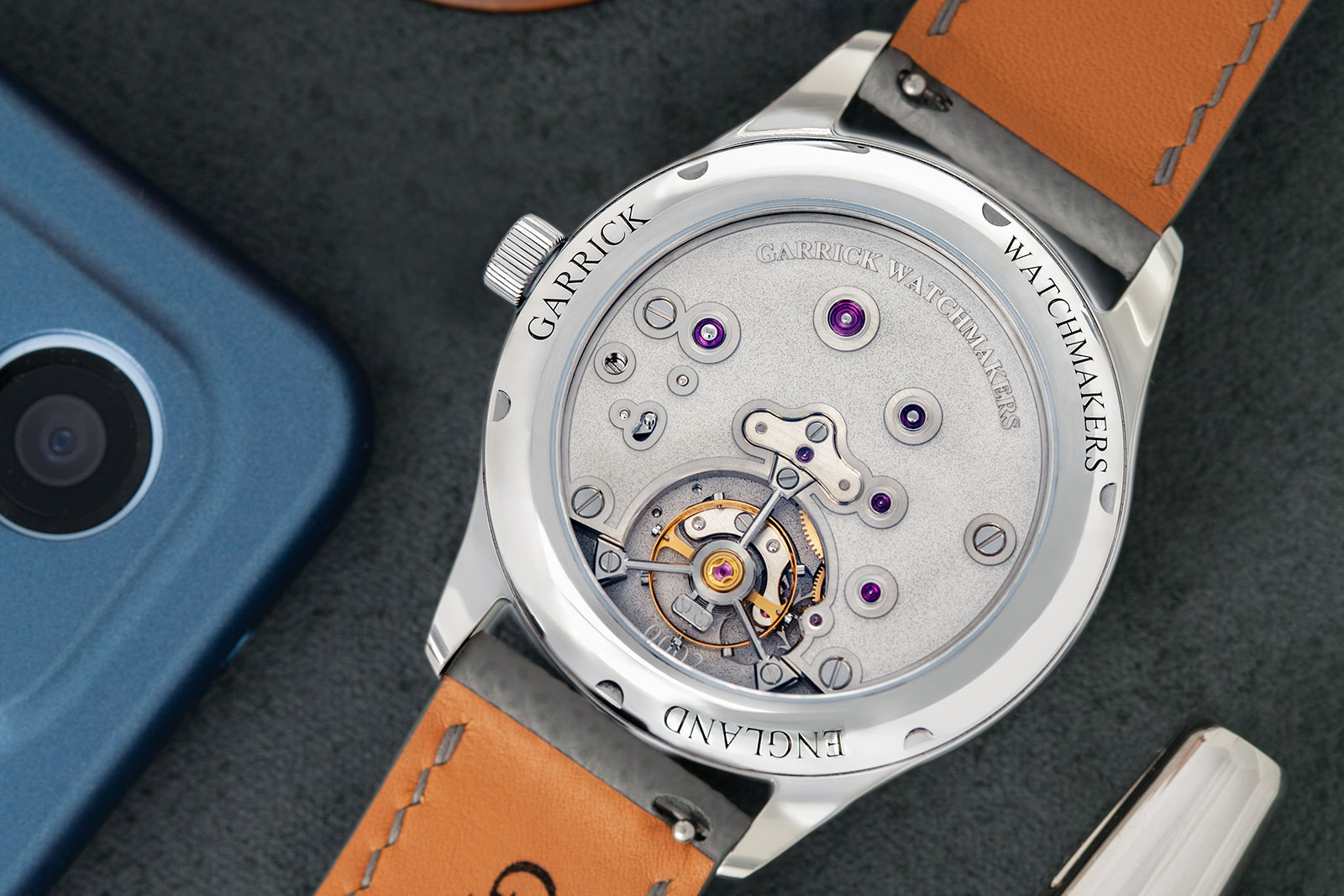 A familiar style but with new mechanics

Like most of Garrick’s line-up, the S5 has a guilloche dial made in-house the traditional way with a manually-operated rose engine. Also made in-house is the applied chapter ring with Roman numerals. Because Garrick makes most of the dial components itself, dial customisation is easy to specify. 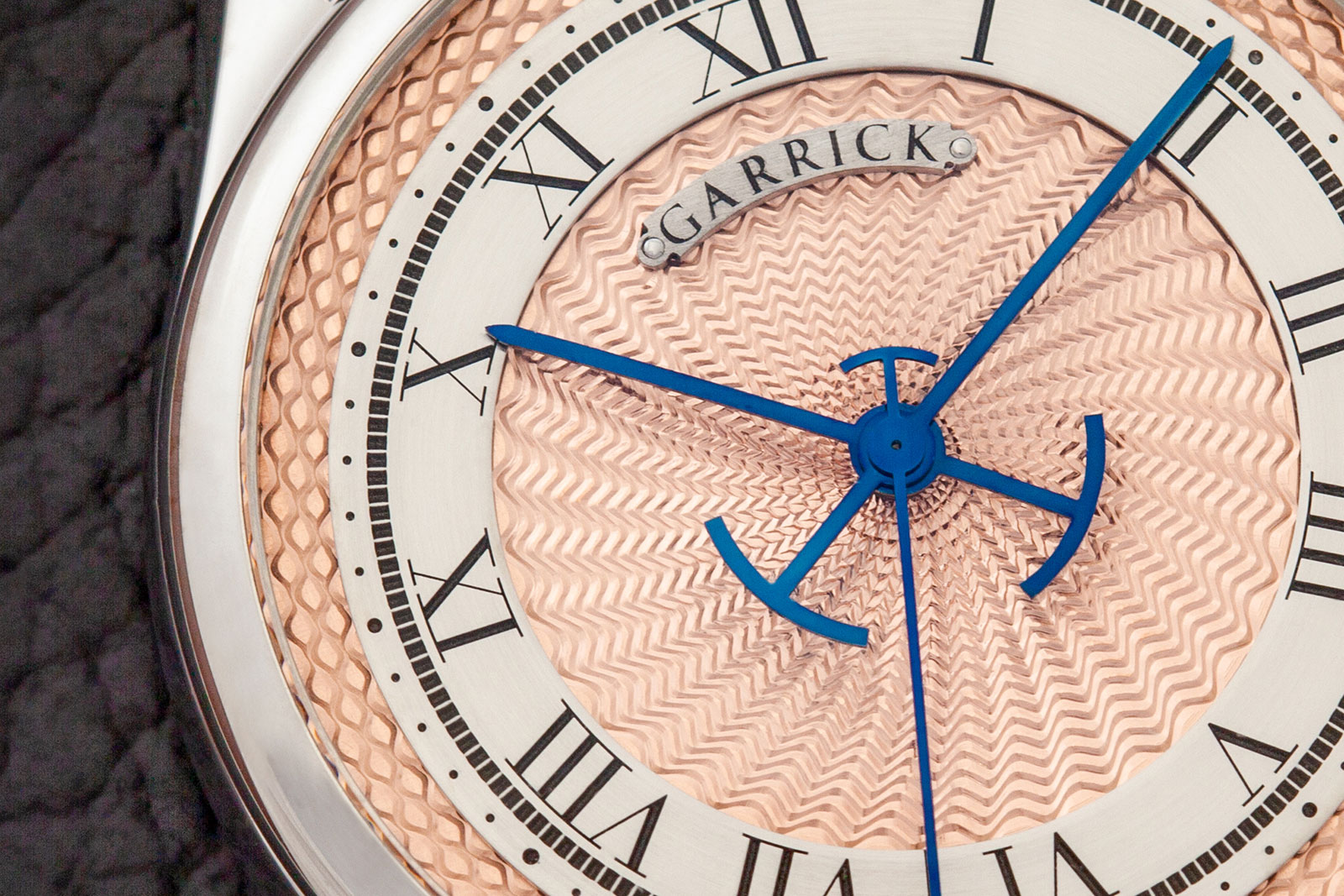 In contrast to the decorative front, the view from the back is much simpler. The movement is dominated by a large, three-quarter plate hides everything except for the balance.

Naturally the highlight is the three-armed balance bridge, the most elaborate component of the movement that has hand-applied bevelling on its arms. It was no doubt designed to evoke a tourbillon cage, though the balance is attached to a conventional regulator. 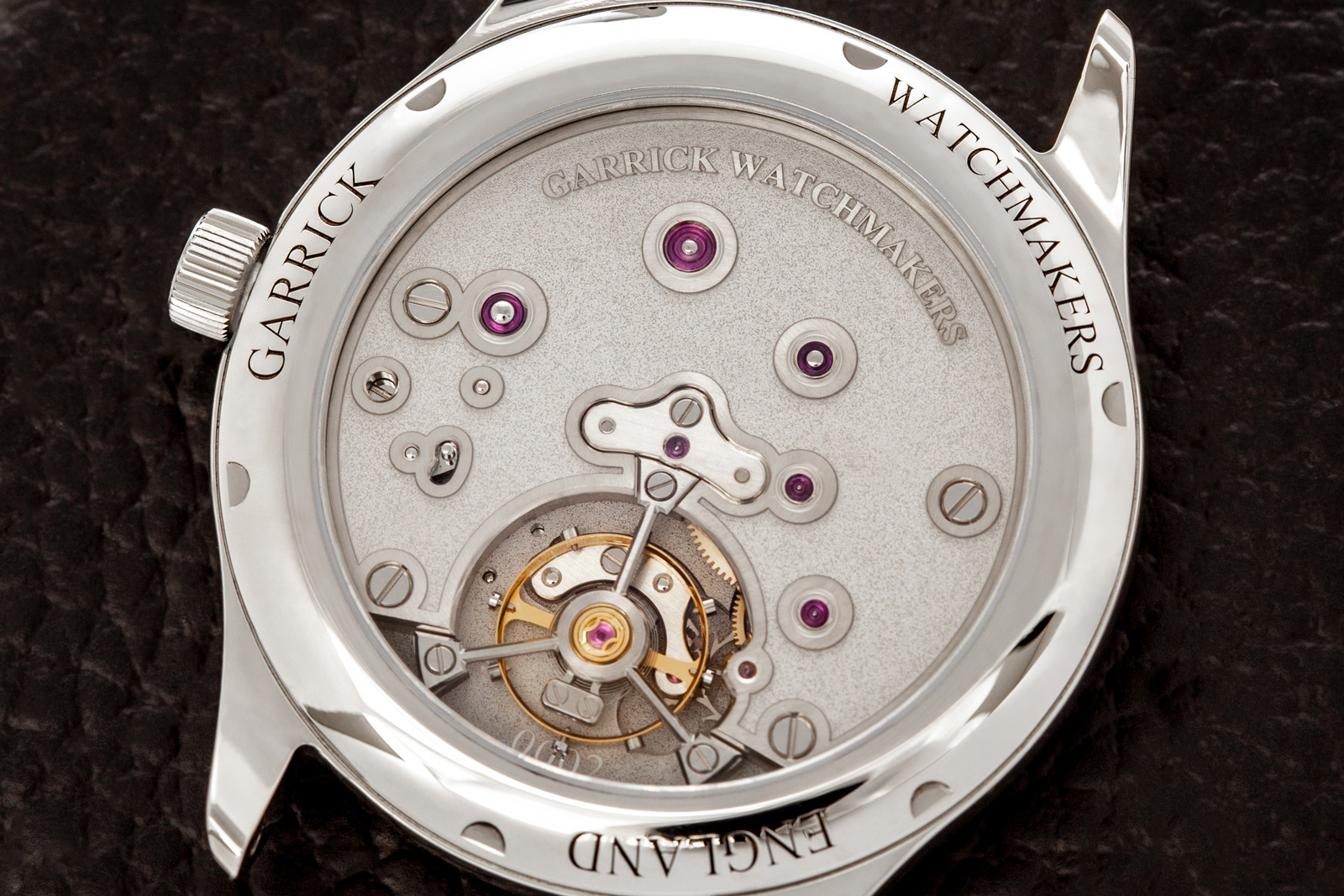 The construction and finishing of the three-quarter plate is simply done, giving it a contemporary, slightly industrial appearance. It’s been laser engraved to create the relief sections, namely the brand name and rings around the jewels and screws. The relief portions are brushed, while the recessed surface is frosted. The clean, monochromatic aesthetic contrasts with the style of the S4 movement, which was modelled on 18th century pocket watch movements.

Garrick makes no mention of any specialists who helped develop the new calibre, but with all its past movements having been created with the help of Andreas Strehler, it stands to reason that this is once again a collaboration with the Swiss watchmaker and his firm Uhrteil.