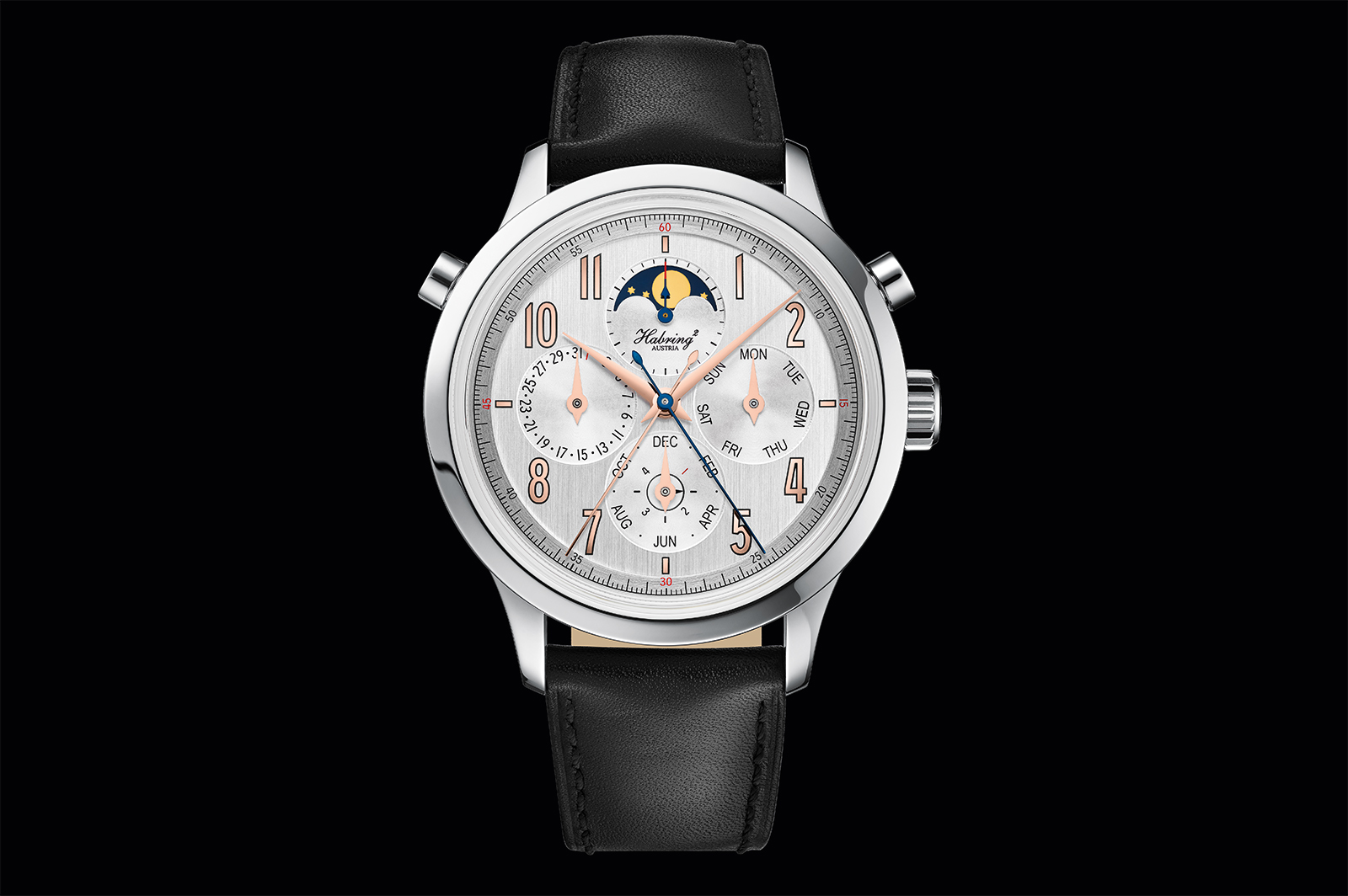 Austrian watchmaker Habring² is well-regarded for its affordable, cleverly engineered watches, particularly the Doppel rattrapante. Now Habring² takes the Doppel a step further: the Perpetual Doppel combines the mono-pusher, split seconds chronograph with a perpetual calendar, while still keeping it affordable as such things go.

Constructed atop its proprietary A11 movement (itself derived from the robust Valjoux 7750), the Perpetual Doppel is unusual in using a complications module not made by Habring², which typically designs its own complications. Instead, the watch uses the tried and tested perpetual calendar module produced by Dubois-Depraz, a complications specialist that also supplies the module to other makers of affordable perpetual calendars.

This makes the Perpetual Doppel the most complicated serially produced Habring² watch, though the brand has produced one-off repeaters and tourbillons in the past. 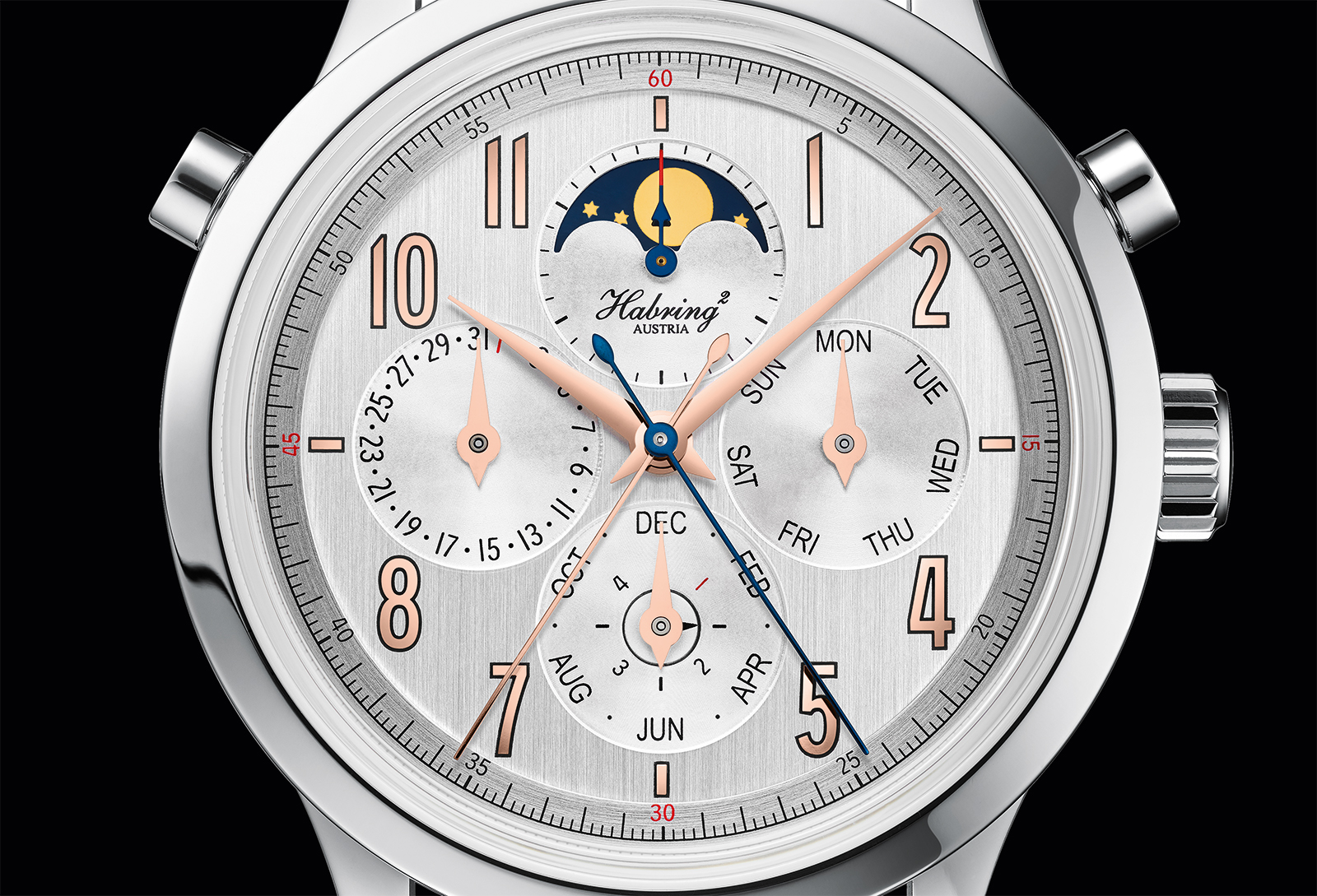 The Perpetual Doppel is generously sized at 43mm in diameter to spread out the calendar displays as much as possible to maximise legibility. But despite the added height of the perpetual calendar, the case manages to stay just 12mm high. 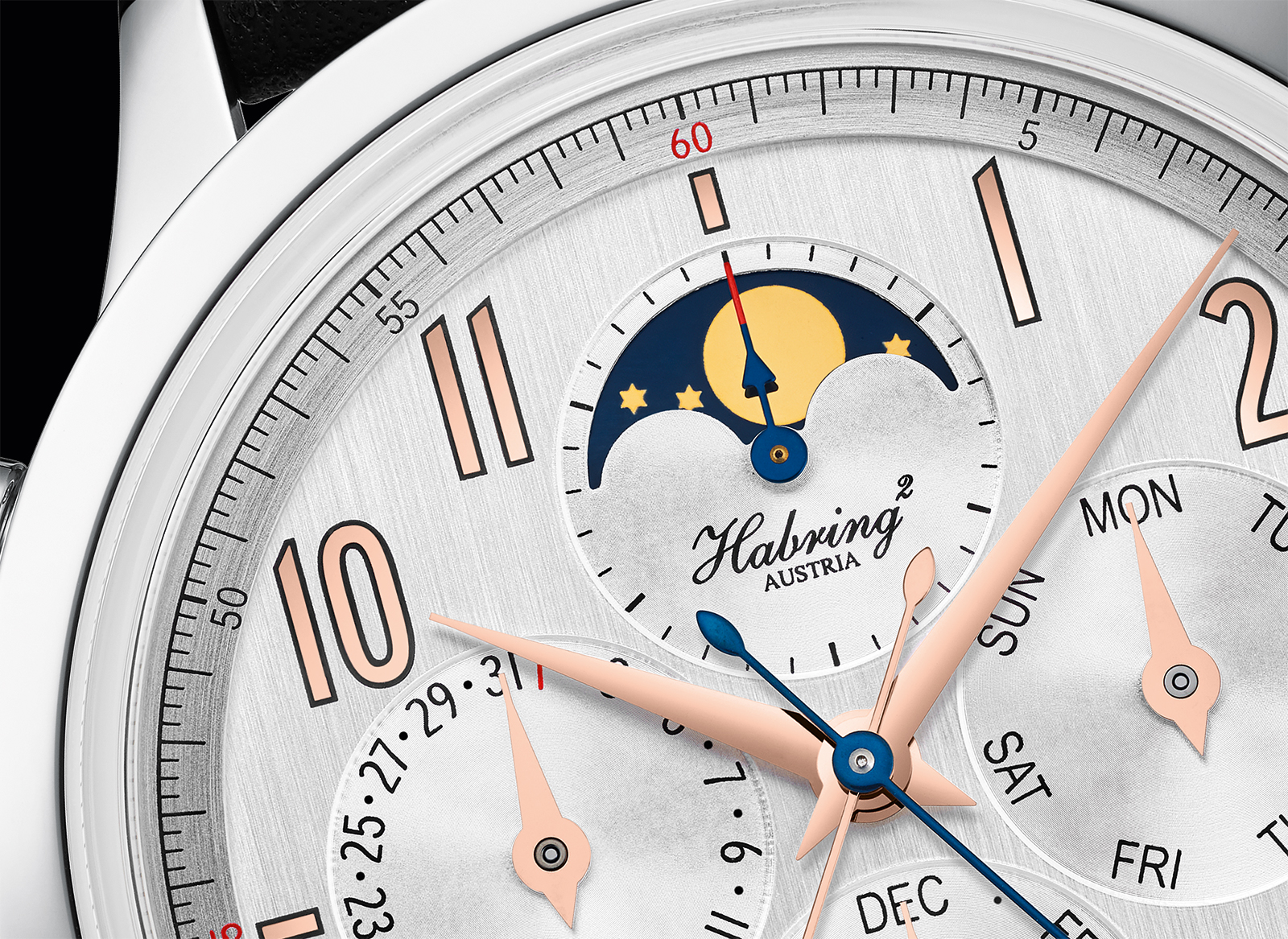 Readability is also helped by the red gold-gilded hour numerals and red gold-plated hands that contrast with the brushed, silvered dial. And the chronograph has two central seconds hands for the split-seconds function, along with a 30-minute counter at 12 o’clock for elapsed minutes.

Inside is the A11P, comprised of Habring²’s signature split-seconds movement combined with the Dubois-Depraz module. The split-seconds mechanism was originally designed by Habring² co-founder Richard Habring while he was working for IWC, and now that the patents for it have expired, Habring² has produced an improved version of the original. 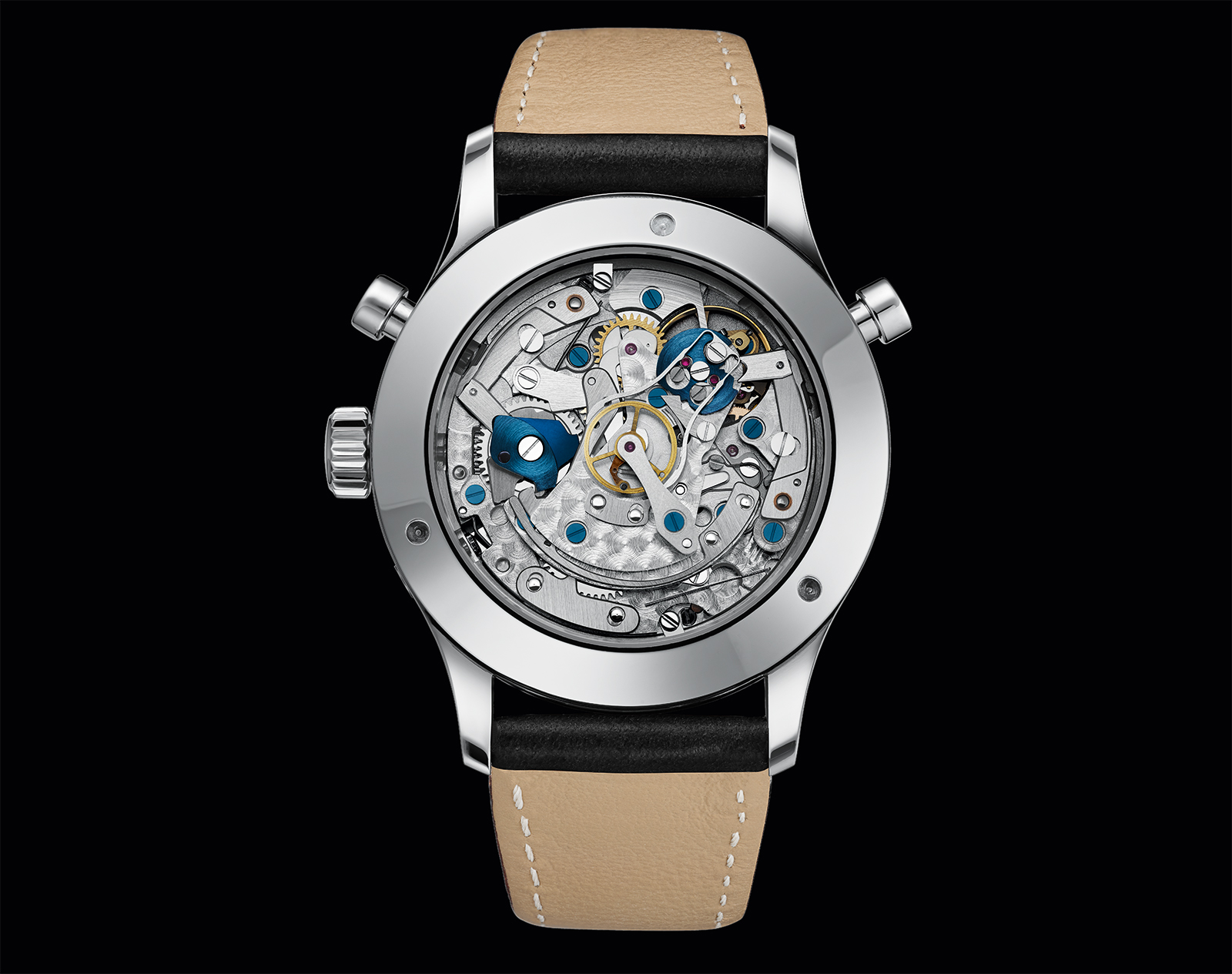 Fully wound, the watch delivers approximately 45 hours of power reserve and is attractively finished, even taking into account its accessible pricing. And the chronograph cam is in blued steel, now a Habring² trademark. Unusually, the balance spring is not Swiss made, instead it comes from German wire manufacturer Carl Haas. 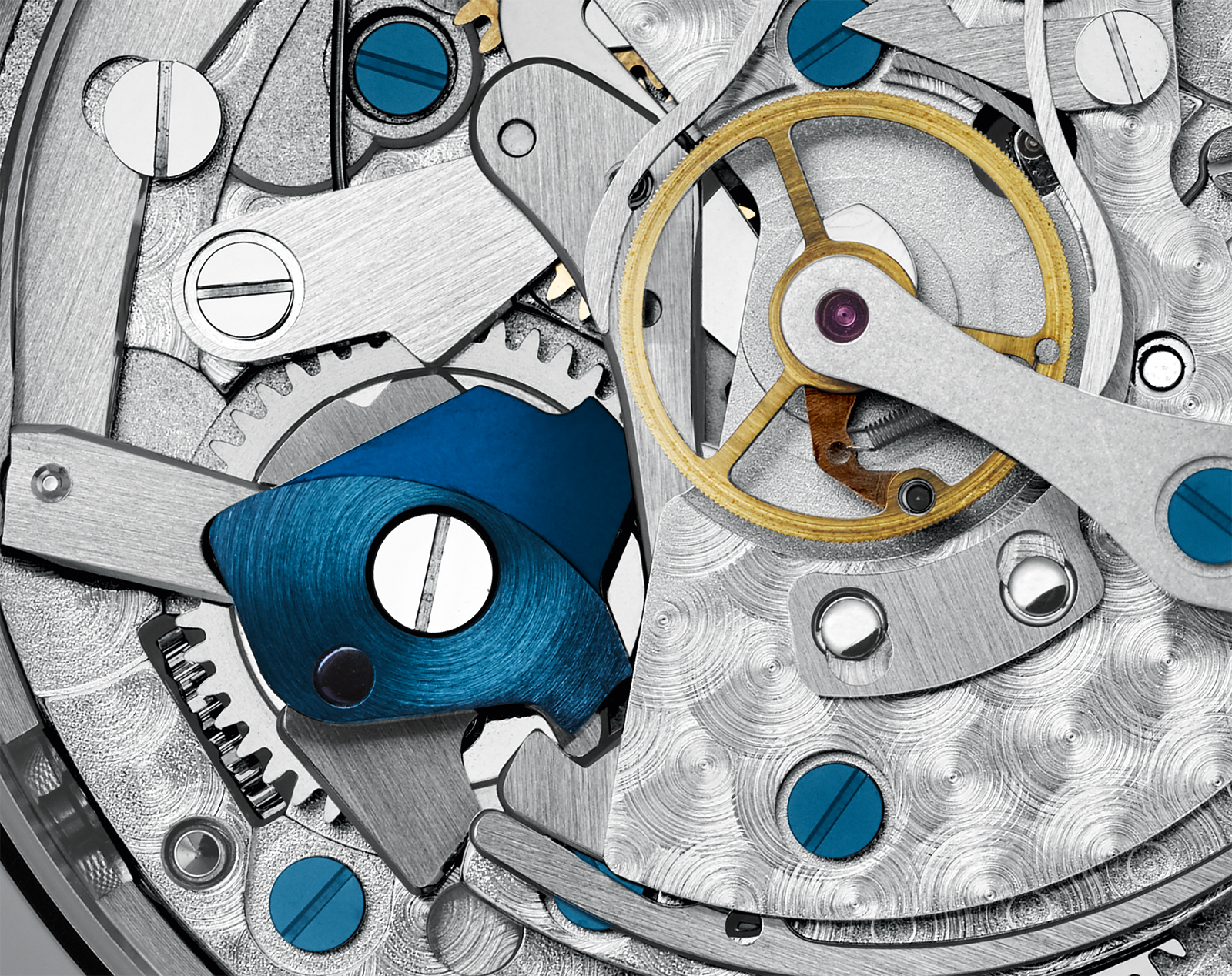 Although not a limited edition, the Perpetual Doppel will only be produced upon request; several have already been delivered to fans of the brand. It’s priced at 21,500 Euros, which is about US$24,300. The watch is available either direct from Habring² or any of its retailers.

The affordable rattrapante from Austria gets a facelift, inside and out.