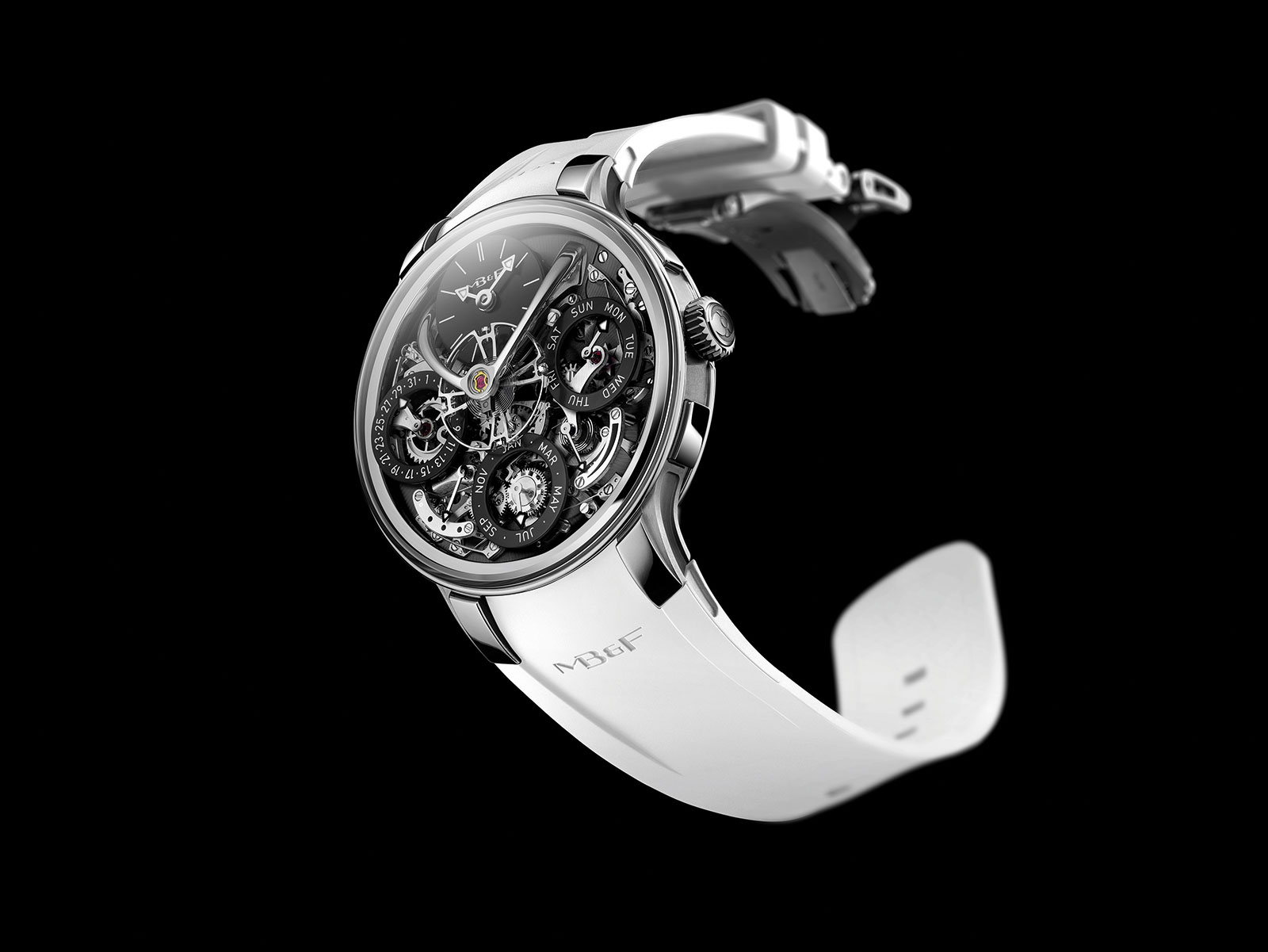 The most complicated MB&F watch when it was launched in 2015, the LM Perpetual (or LM QP) was powered by an ingenious movement combining a “split” escapement and a novel perpetual calendar mechanism developed by Irish watchmaker Stephen McDonnell. Now MB&F has reworked the watch to create its sportier and more robust successor, the LM Perpetual EVO.

Featuring several tweaks to the case, dial, and movement that are cumulatively significant, the LM Perpetual EVO boasts increased water resistance along with an integrated rubber strap. 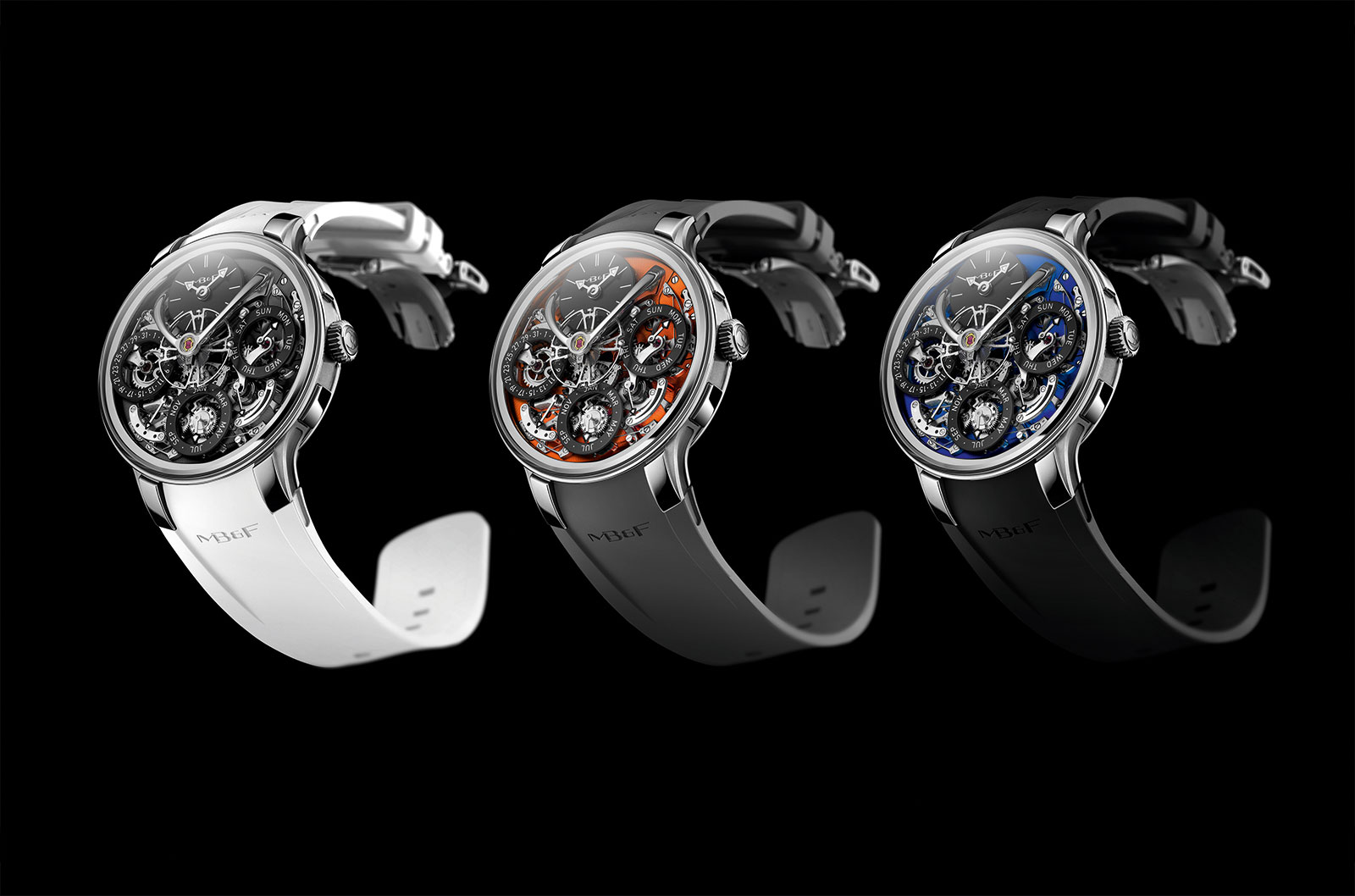 The LM Perpetual EVO is a limited edition of 15 watches each in black, blue, and orange

Even though the Legacy Machine (LM) line was conceived as something inspired by the 19th century and Jules Verne, the LM Perpetual with its open-worked, intricate dial was always stylishly modern, though that was toned down by the white-lacquered sub-dials of the original model.

The EVO, however, makes full use of the open-worked dial to become an uber-contemporary watch. Both the material and construction of the case are new: it’s now zirconium with a more complicated architecture, featuring recessed sides and angular lugs that integrate with the strap. And the sub-dials are black, creating a striking contrast against the base plate in black, blue, or orange.

Most notably, the EVO brings to mind the Harry Winston Project Z1, which was the other major product developed by MB&F founder Maximilian Büsser when he was chief executive of Harry Winston Rare Timepieces, which continues to use Project Z case design today. 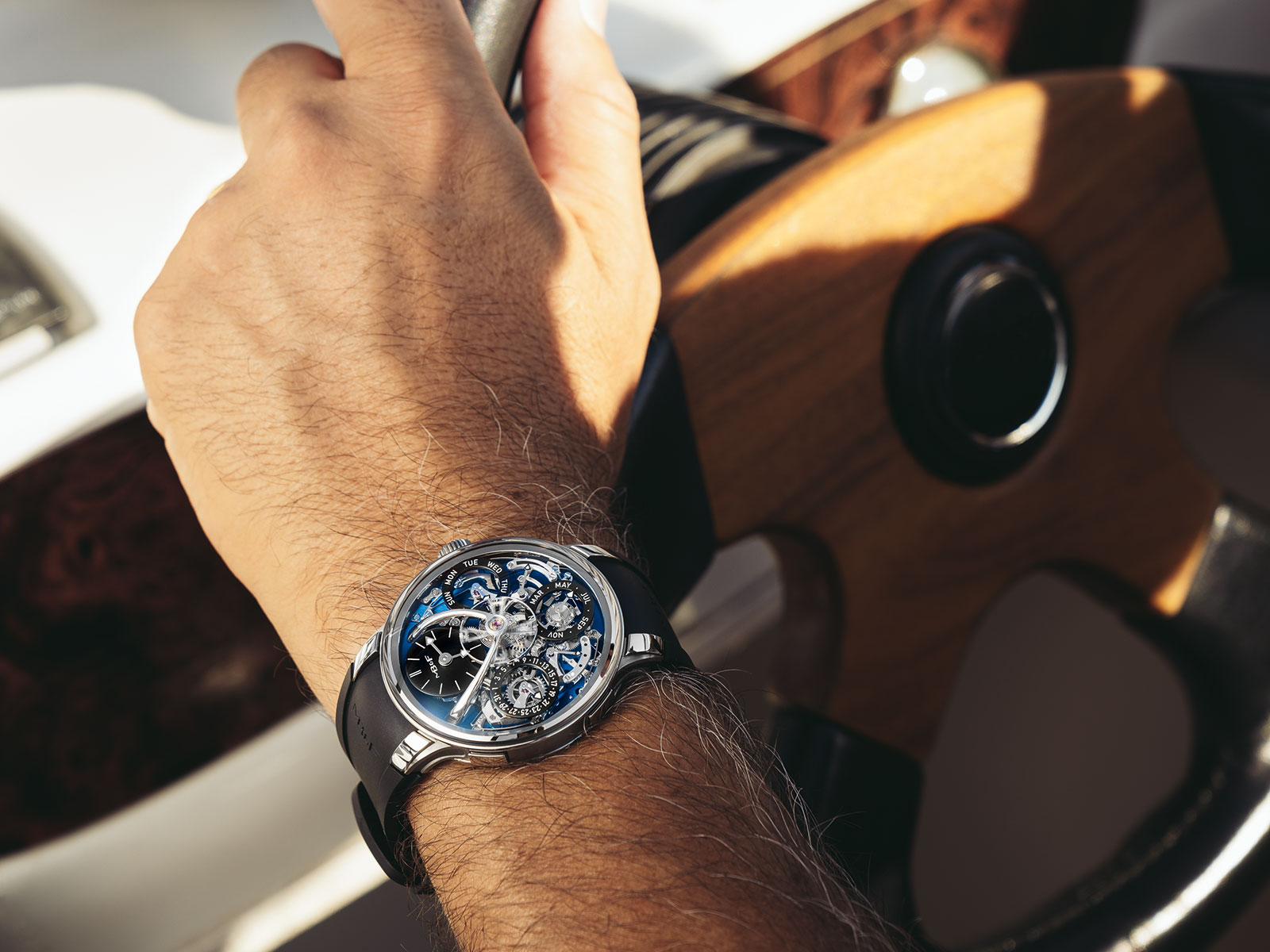 While the EVO isn’t the typical sci-fi MB&F watch, it manages to create a new look (or revive an old one) without diverging too much from the original LM QP – it is a successful evolution of a successful watch. Limited to 15 pieces in each colour – with the most striking being orange – the EVO is priced at US$167,000. That makes it one of the most expensive perpetual calendars on the market, but it is a rare blend of qualities: exuberant design, inventive mechanics, and excellent finishing. 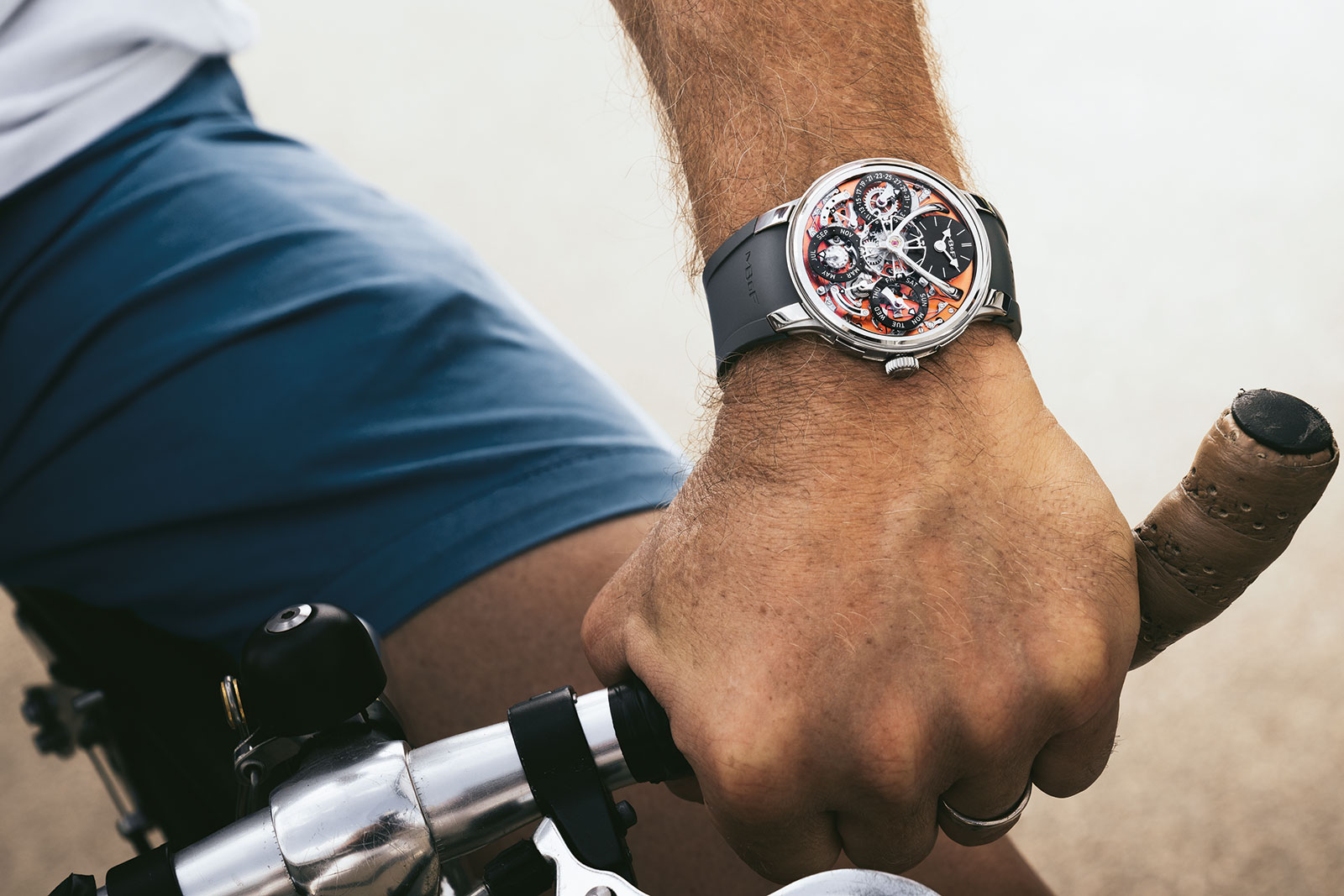 Mechanically the EVO is identical to the LM QP. The movement was developed by Stephen McDonnell, a watchmaker little known outside the industry until his work for MB&F. Mr McDonnell reimagined the traditional construction of a perpetual calendar, creating a more reliable and user-friendly mechanism that is entirely visible on the dial under the extra-large balance wheel. 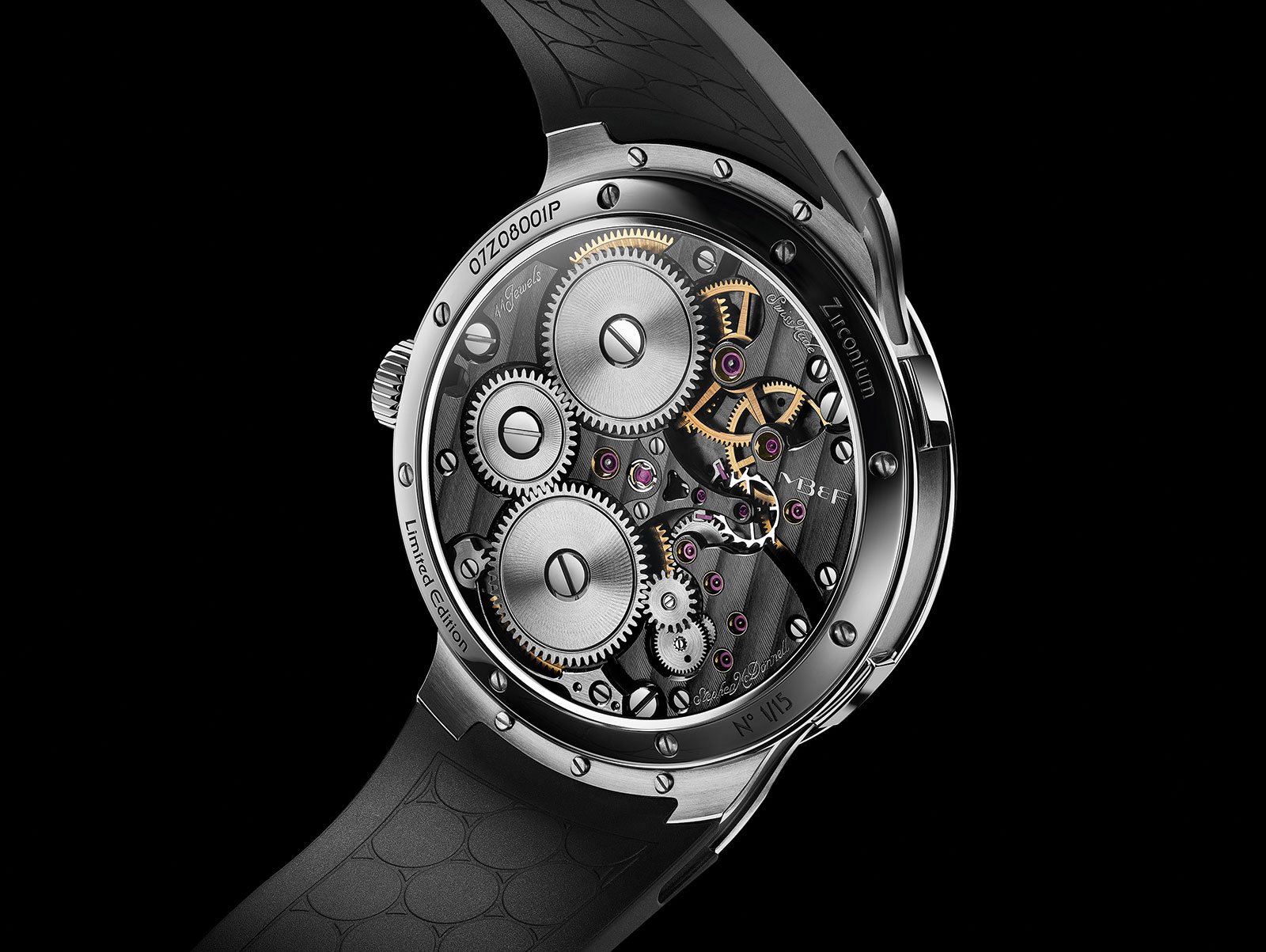 While the LM QP was offered in more common case metals like gold and titanium, the EVO case is in zirconium. A silvery metal that’s hypoallergenic and corrosion resistant, the metal has been used sparingly by MB&F in the past, namely for the HM3 and HM5, but it’s being used for the first time in the LM line.

But while the case material is interesting, the highlight is actually the design. The new case is smartly done, with both the aesthetics as well as functionality having been enhanced. The tiny buttons for the calendar on the original LM QP have now been replaced with larger, rectangular pushers, making calendar adjustment easier. But the pushers sit within the recessed case band, so they avoid looking like chronograph buttons and do not break up the lines of the case too much. 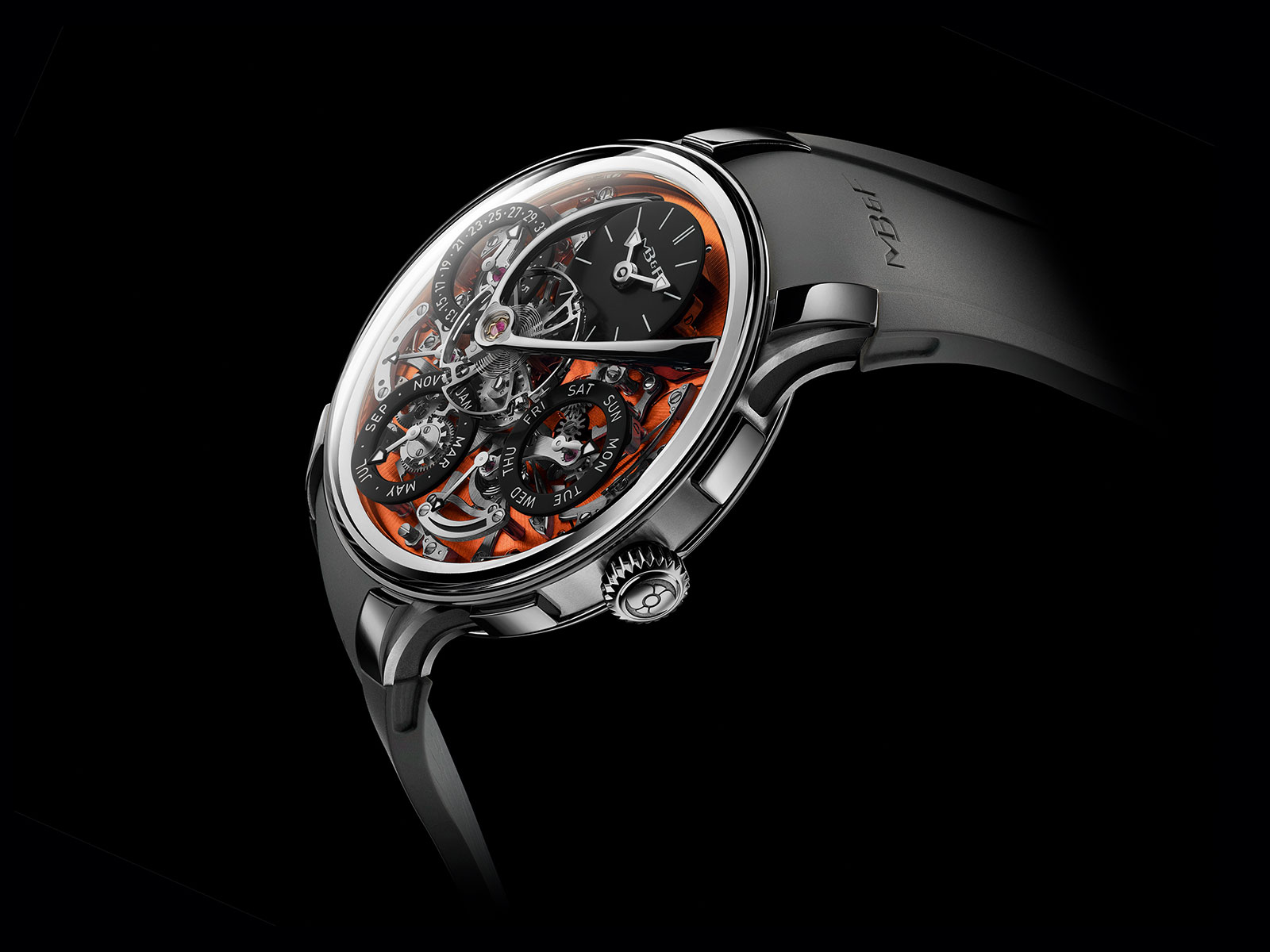 A less obvious change is the bezel, which is now completely disappeared. In a construction that is increasingly popular with watchmakers, the crystal is secured on the case middle, creating a panoramic view of the mechanics on the dial. A ring that acts as a shock absorber sits between the case and movement, and it also services as a visual border between the crystal and case.

Importantly for a sports watch, the EVO has a screw-down crown and water resistance of 80 m, which isn’t quite diver’s watch territory but more than enough for a highly-complicated and expensive sports watch. 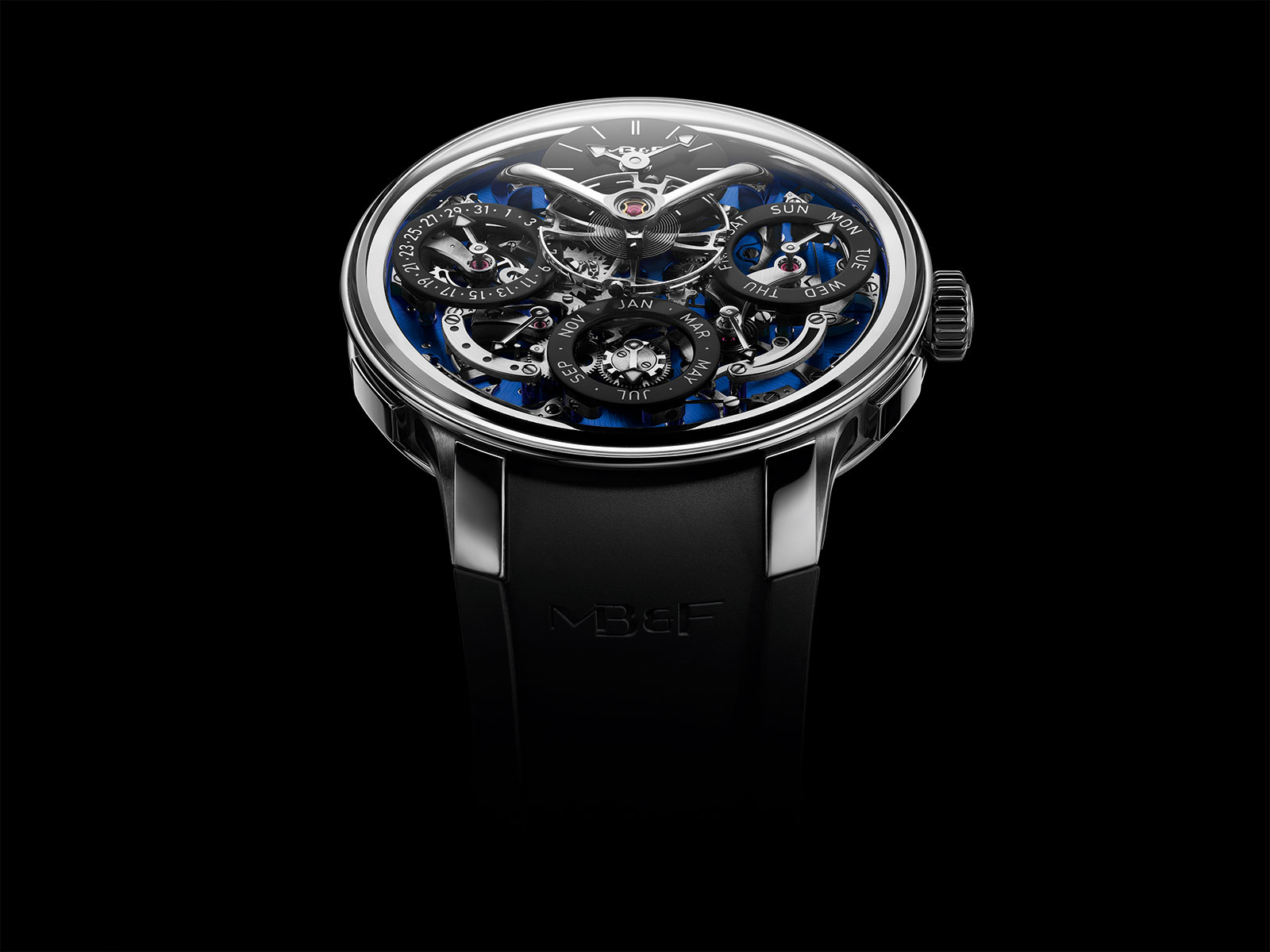 Limited edition: 15 piece in each black, blue, and orange
Availability: Already available at MB&F retailers and MAD Galleries
Price: US$167,000