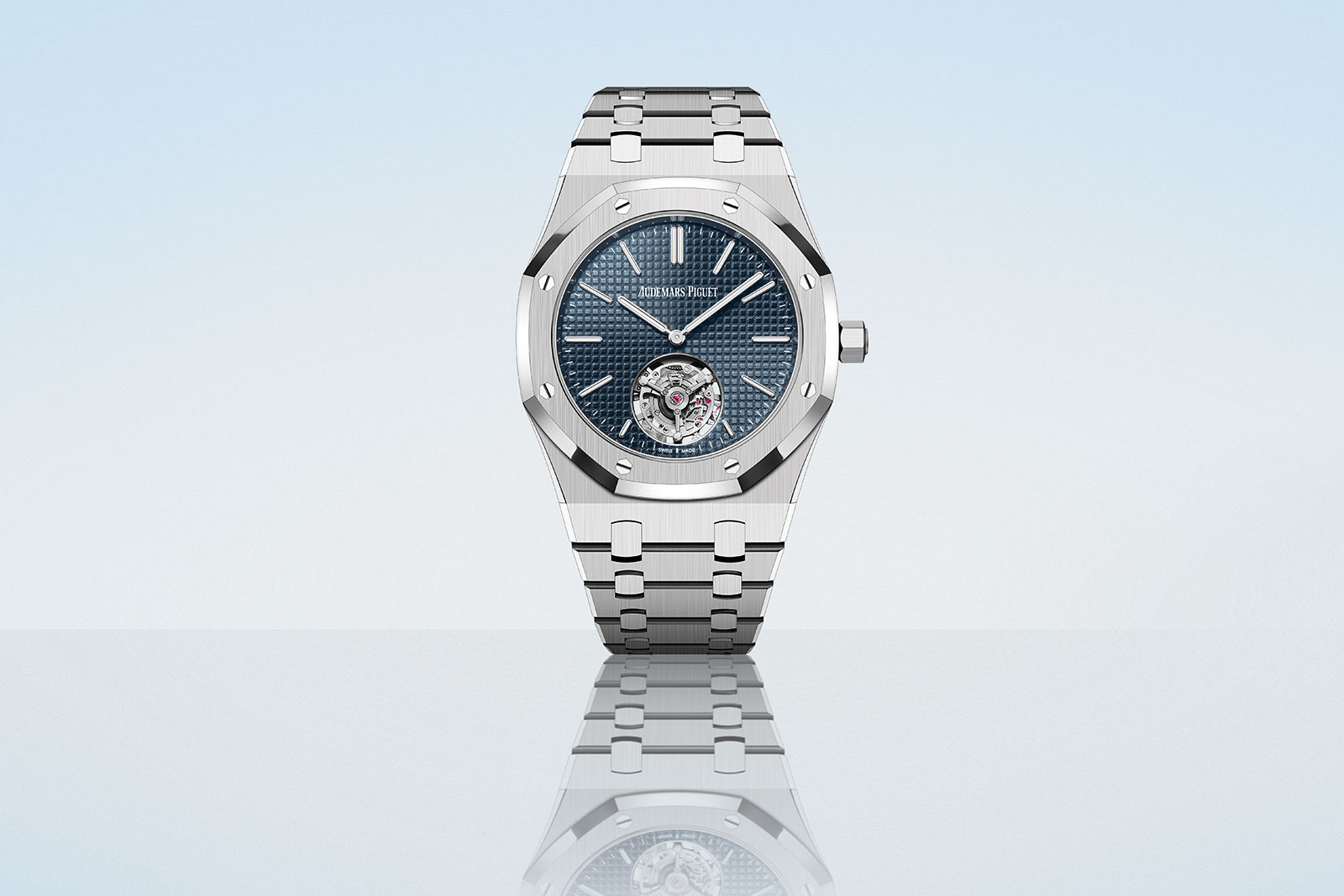 Having unveiled the first all-new Royal Oak “Jumbo” ref. 16202 earlier this year to mark the model’s 40th anniversary, Audemars Piguet has now taken the covers off the first “Jumbo” tourbillon.

Possible thanks to the newly developed movement found in the ref. 16202, the Audemars Piguet Royal Oak Selfwinding Flying Tourbillon Extra-Thin RD#3 has exactly the same dimensions, but also boasts a flying tourbillon.

Recent Royal Oak tourbillons were bulky compared to the svelte time-and-date “Jumbo”, largely because they utilised movements developed for use across Audemars Piguet’s range of watches. Last year’s Royal Oak automatic tourbillon, for instance, was 41 mm in diameter and shares the same movement as the Code 11.59 tourbillon.

In contrast the new “Jumbo” tourbillon is equipped with a movement conceived specifically for the model, one that allows the case to retain the dimensions of the original Royal Oak ref. 5402 of 1972. 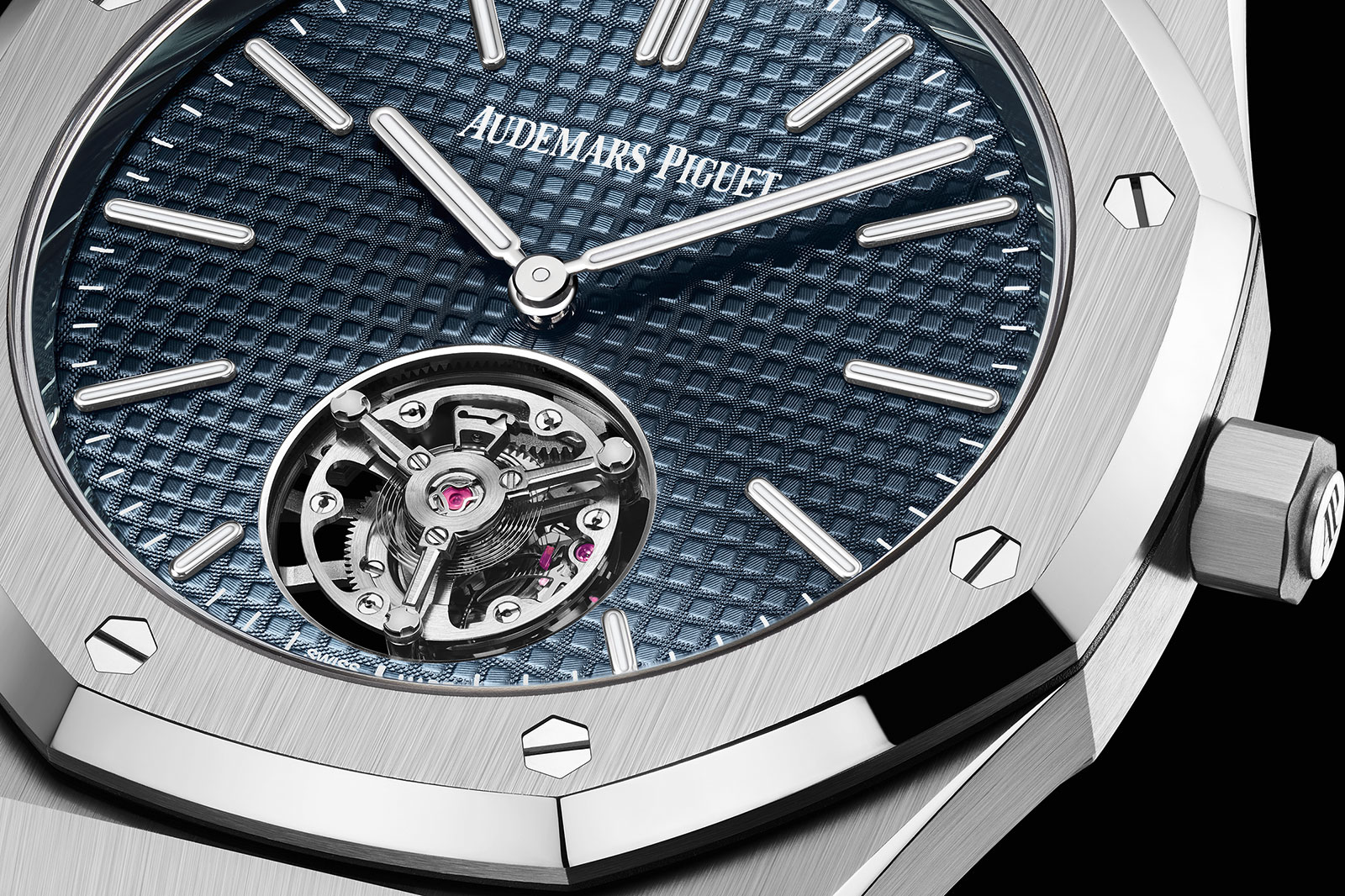 As a result, the “Jumbo” tourbillon is surely an appealing watch, because the lines and proportions of the original Royal Oak are practically ideal.

Granted, the addition of the tourbillon is a matter of taste – you may or may not like the aperture on the dial that reveals the regulator. I like the look, with one caveat: I wish the “AP” emblem was retained on the dial.

The new tourbillon is essentially the ref. 16202 with the addition of a tourbillon regulator. It has exactly the same size as the ref. 16202 – a diameter of 39 mm and a height of 8.1 mm. Naturally the case is steel, although it is a certainty other case metals will be offered in the future. 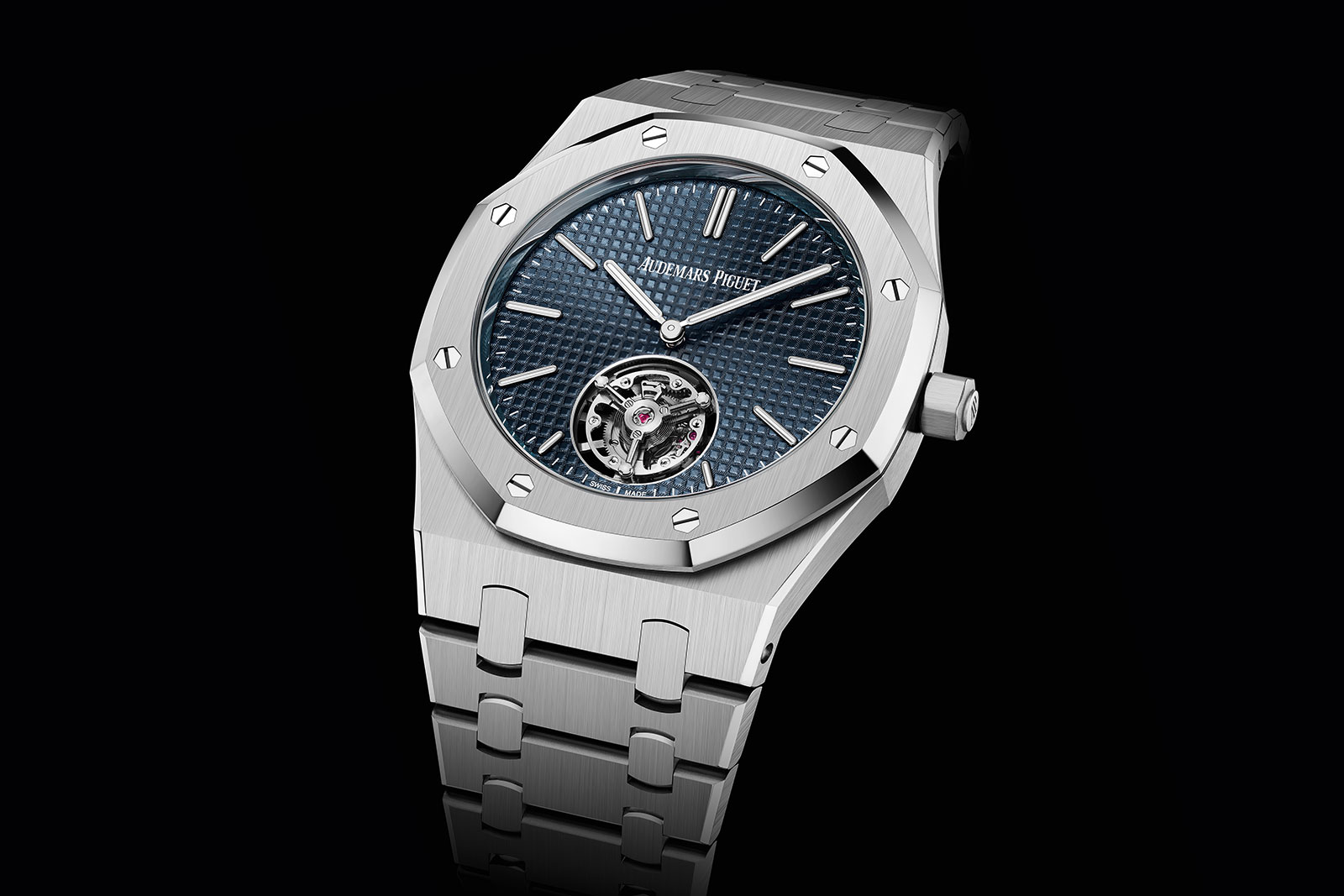 At the same time, the dial also has the same colour and tapisserie guilloche found on the ref. 16202. 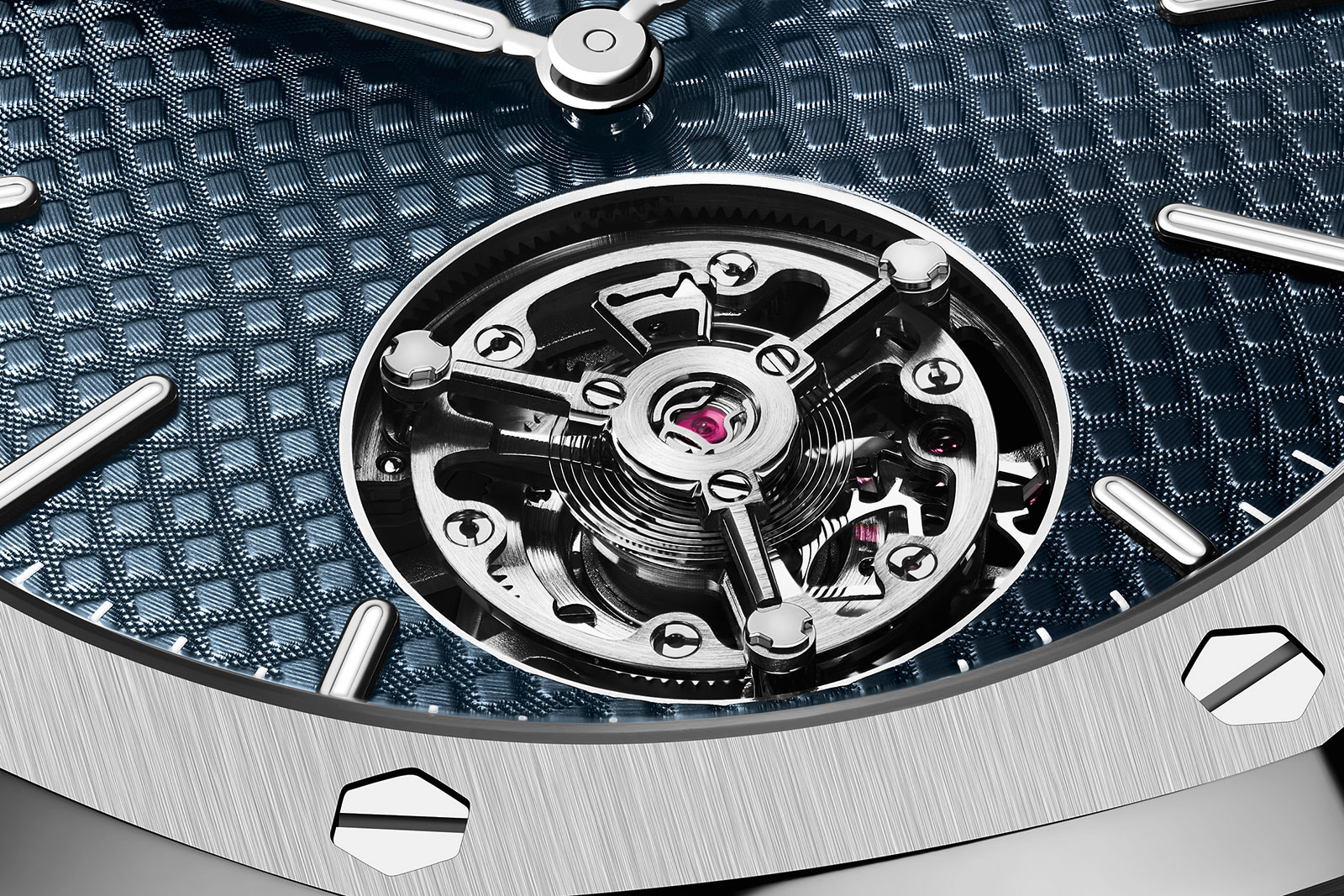 The movement inside is the cal. 2968, which is clearly derived from the cal. 7121 found in the ref. 16202. Although the regulator has been repositioned to sit at six o’clock for vertical symmetry on the dial, other key elements of the movement are identical, including the barrel as well as winding wheels.

Amongst the most notable features of the movement is the “peripheral drive” of the flying tourbillon. Instead of a wheel under the carriage as is convention, a large toothed ring drives the tourbillon, reducing the height of the movement. 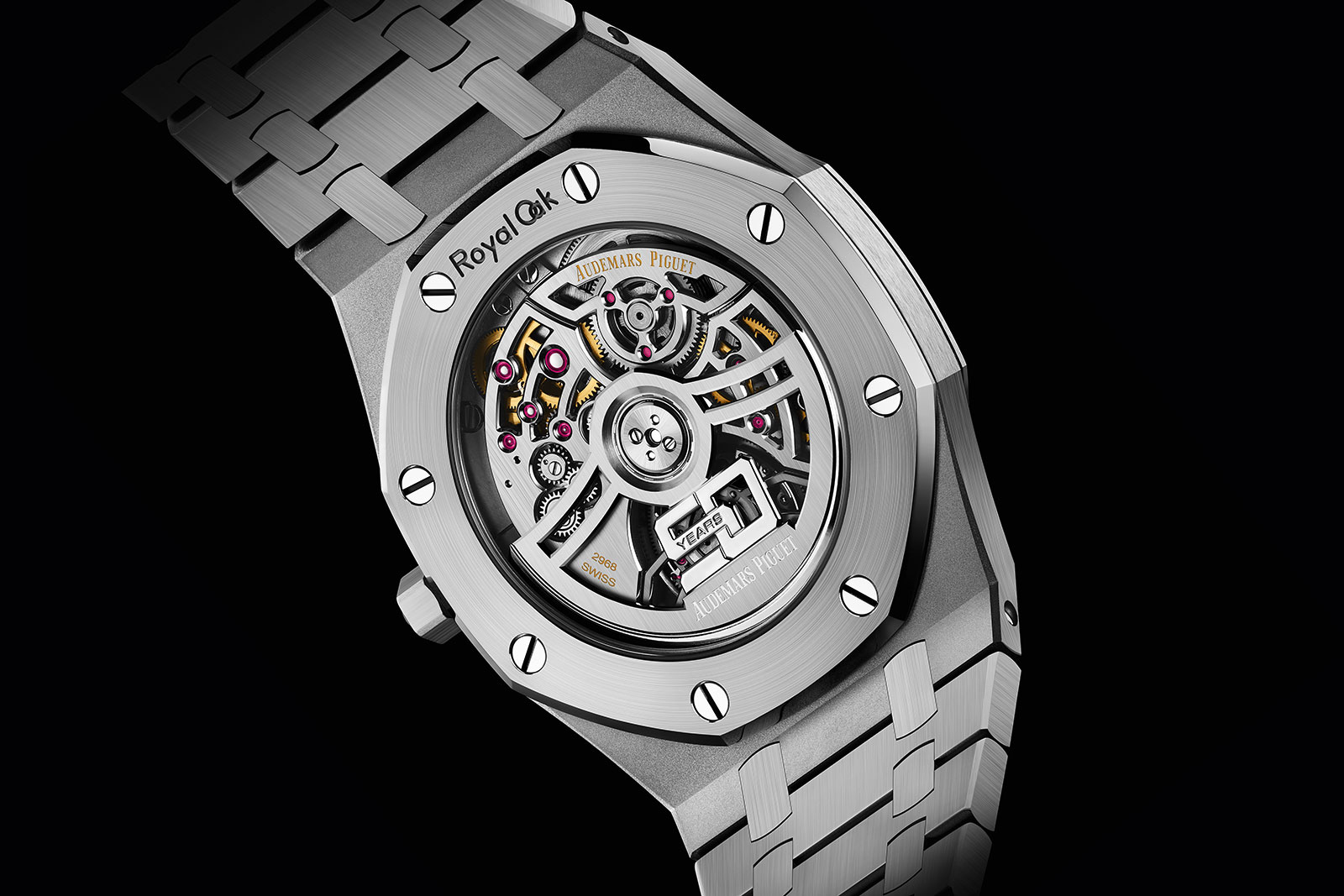 Notably, Audemars Piguet indicated a 37 mm Royal Oak tourbillon with the same movement will be launched in September 2022.

Satisfyingly modern in engineering and style.