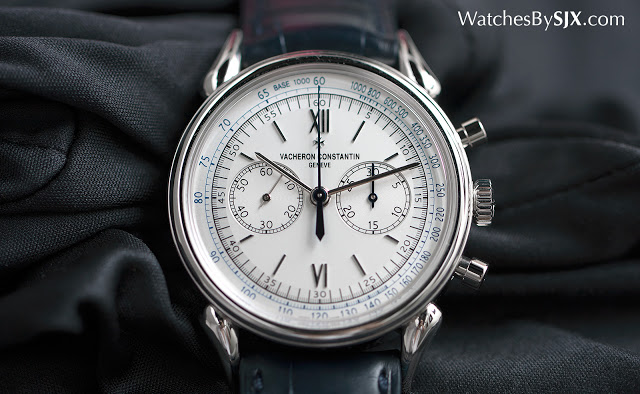 Vacheron Constantin has had a good years with its chronographs, most notably with the new calibre 3300 in the Harmony Chronograph. But traditionalists will probably appreciate the Historiques Cornes de Vache 1955 Chronograph a little more, since it’s essentially a replica of a rare vintage timepiece. And the Cornes de Vache is also equipped with a movement that is essentially decades old, but one that has been heavily upgraded.

Cornes de Vache translates as “cow horns”, a name derived from the pointed lugs. The original “Cornes de Vache” was the reference 6087, a rare model introduced in 1955 and produced until the mid-1960s.

According to official Vacheron Constantin forum The Hour Lounge, only 36 were made, with 26 in yellow gold, eight in pink gold, as well as a pair in platinum that did not have cow horn lugs. After the reference 6087 was discontinued, Vacheron Constantin did not produce any more chronographs – until 1989. The recently introduced remake is, like most other reproductions, an enlarged version of the original. Measuring 38.5mm in diameter, the platinum case is sizeable larger than the 35mm original, but nonetheless moderately sized by today’s standards. But because it’s platinum it is reassuringly weighty. The dial is sedate – silvered with a blue tachymetre scale. That’s matched with the chronograph hands in blued steel. All the hour markers are applied. Put simply, the dial is uncontroversial. But the lugs are special. Long, curved and tapering to a sharp tip, the lugs make the watch. They are the only element of the entirely design that is unconventional. And the size of the lugs give the watch presence. On the topic of design, Vacheron Constantin deserves praise for successfully enlarging the watch while retaining attractive proportions. That is often lost in modern chronograph watches that use movements designed decades ago. Old movements are mostly small, while today’s watches are big. Consequently chronograph sub-dials tend to appear jammed in the centre of a dial, with lots of space on the extreme sides of the sub-dials. Despite using a small (and old) movement, the Historiques Cornes de Vache 1955 avoids this with two features. One is putting distinct gap between the hands and the edge of the chronograph registers. And the other is a prominent minute track with long hashmarks as well as a wide tachymetric scale, which together occupy the space on the outer edge of the dial.

Once the standard movement in high-end chronographs by the likes of Patek Philippe in the references 3970, 5070 and 5970 – before most watchmakers developed their own proprietary movements – the 2310 is decades old, having been introduced in the 1940s. But the 1142 is a major evolution of the original Lemania calibre. To start with it is made by Vacheron Constantin, since Lemania (now integrated into Breguet), no longer supplies movements to third parties. The rights to make the movements came to Vacheron Constantin via Roger Dubuis, which acquired the license in the early 2000s. Richemont took over Roger Dubuis in 2008, leading to the calibre 1142.

Many things have been improved in the 1142, most of which are difficult to discern but functionally important. They include the shape of the chronograph levers, tension springs and even the teeth on some gears. One upgrade that is immediately visible but purely aesthetic is the Maltese Cross on top of the column wheel. A major and obvious improvement is the free-sprung balance with a Breguet overcoil, a feature expected in high-end movements. And the finishing has also improved. Not just in the decoration itself, but some of the bridges have more complex forms, requiring more finishing. One example is the Y-shaped chronograph bridge that now has a pointed base instead of a flat one.

Though not a numbered limited edition, the Cornes de Vache 1955 will be made in small numbers for a fixed period, after which there will be no more made in platinum. It would not be surprising though, if a new version is introduced in another metal next year or in 2017. 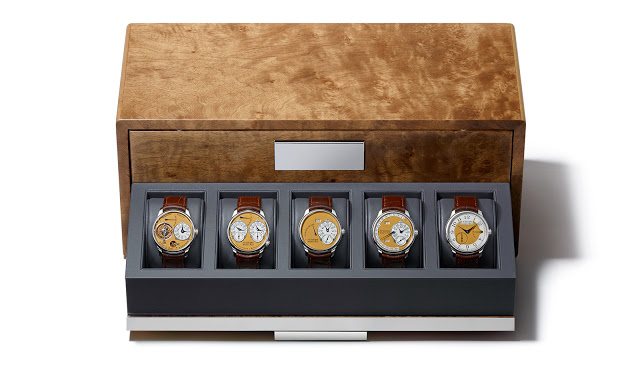 F.P. Journe is saying farewell to its classic, 38mm case with a set of stainless steel watches made up of five signature models – all with a diameter of 38mm in a limited edition of just 38 sets. When F.P. Journe presented his first tourbillon wristwatch in 1991, it had a 38mm case. Though large at the time, modern tastes dictated larger sizes and a 40mm case was devised in 2001. Eventually a 42mm case joined the offerings, most recently with the new Octa Lune. Now the original, 38mm size has come to an end, an occasion F.P. Journe is commemorating with a five-piece set comprising his most iconic timepieces, each in a 38mm, stainless steel case. The most unusual watch in the set is the Tourbillon Souverain because it’s equipped with the original F.P. Journe Tourbillon Remontoir d’Egalite movement, but with the bridges and base plate made of rose gold for the first and only time. Rhodium-plated brass was the material used in the original run of tourbillon wristwatches.

The other models in the set are the Resonance (in its original, symmetric guise), Octa Calendrier, Octa Reserve de Marche and Chronometre Souverain. All are equipped with movements featuring rose gold bridges and main plates, just as in the regular collection.

All are fitted with gold dials finished with a “bronze patina”, silvered sub-dials and blued steel hands. Priced at SFr268,000 before taxes, the set is delivered in a burl wood box inlaid with a brass plate engraved with the owner’s name.  For those wondering, the retail price for the set is approximately 20 percent less than the cumulative cost of buying each of these watches in 38 mm platinum cases. 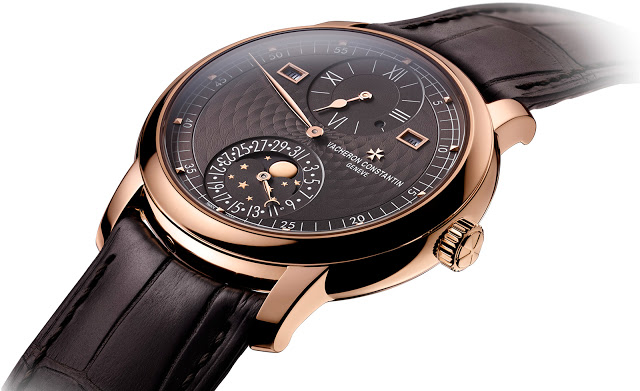 Last year at Watches&Wonders Vacheron Constantin took the covers off the Maître Cabinotier Astronomica, a multi-million dollar wristwatch with 15 complications. Now at Watches&Wonders 2015 (which also happens to be the stage to showcase the most complicated watch ever) Vacheron Constantin has once again revealed a unique creation, the Maître Cabinotier Perpetual Calendar Regulator that combines a regulator-style time display with a concisely laid out perpetual calendar.

The latest addition to the Maître Cabinotier collection of unique timepieces, the Perpetual Calendar Regulator tells the time like an antique precision clock, with the hours and minutes on separate sub-dials for better legiblity. Known as regulator clocks, such clocks were usually the reference for other timepieces in places where precision timekeeping mattered, like watch factories an observatories.

Here the hours are located at 12 o’clock and the minutes on the central axis (though traditional regulator clocks had the hours at six o’clock). And the perpetual calendar is integrated in a similarly legible manner, with the day and month shown in windows on either side of the hours, while the date and moon phase at at six o’clock. A tiny round aperture at the four o’clock marker on the hour sub-dial show the leap year. Though the layout is simple, the dial is decorative. A glossy brown, the dial is finished with a swirling, complex guilloche. The hands are spade-shaped while the hour markers are tiny pyramids. To match the colour of the case, the hour markers, hands, window frames for the month and day, as well as the moon and star, are all in pink gold.

The 42mm pink gold case contains the calibre 2460 RQP (short for régulateur quantième perpétuel), an automatic movement with a 40 hour power reserve. While the mechanism for the regulator time display and perpetual calendar were developed for this specific watch, the base movement is the same top-of-the-line calibre found in several other watches, including the Harmony Dual Time. The Maître Cabinotier Perpetual Calendar Regulator is delivered with a watch winder, stylus to set the calendar as well as a magnifying glass.