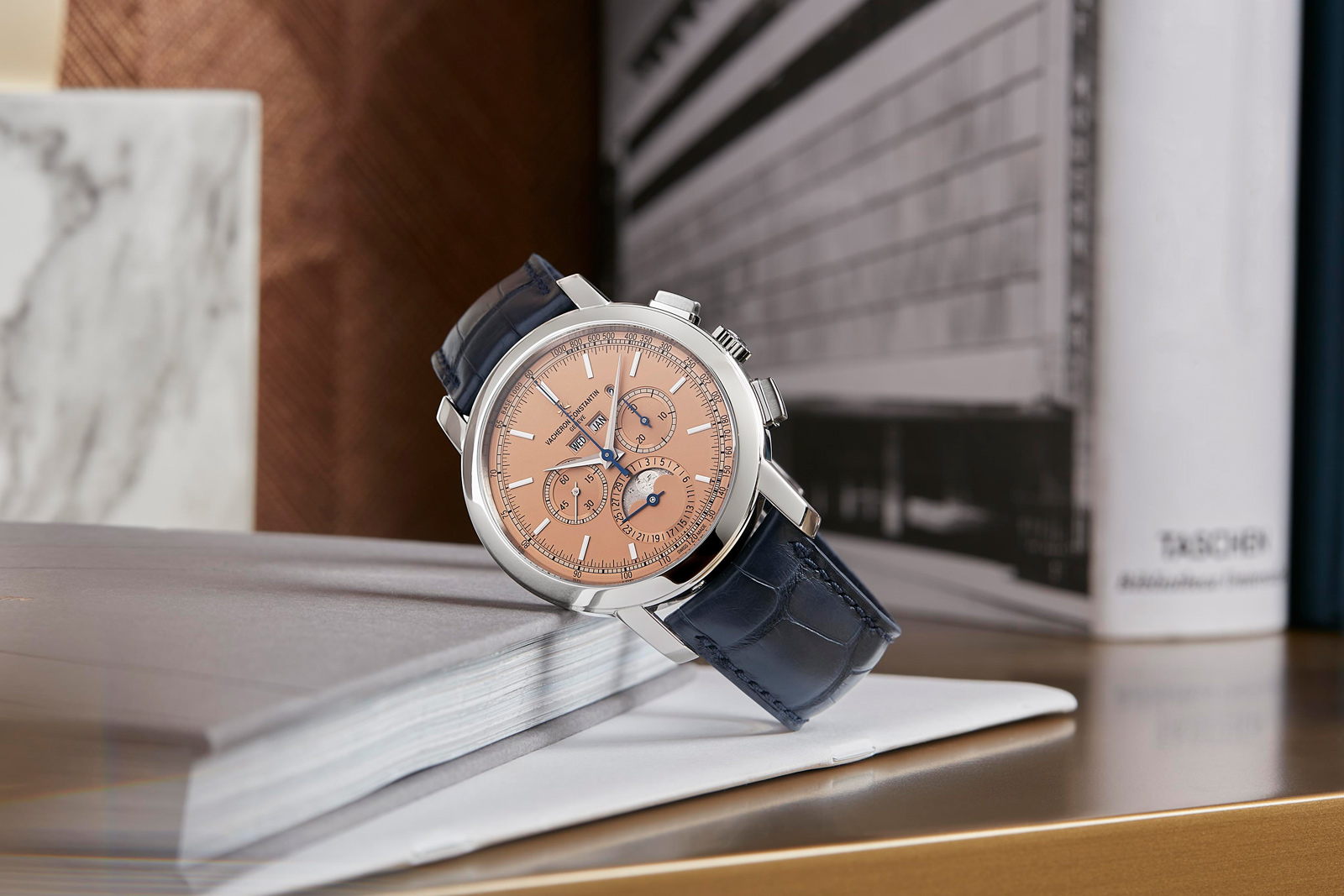 Vacheron Constantin opens its doors at Watches & Wonders 2022 with diversity of timepieces ranging from the sporty to artisanal, but its most classical offering is the Traditionnelle Perpetual Calendar Chronograph in a fashionable “salmon”.

With the model having been launched over a decade ago and then gently upgraded in 2016, the new version is merely a facelift. But still it’s noteworthy for combining a platinum case with a “salmon” dial, both currently desirable attributes, which should help make this a strong seller (which also explains why it will only be available at boutiques). 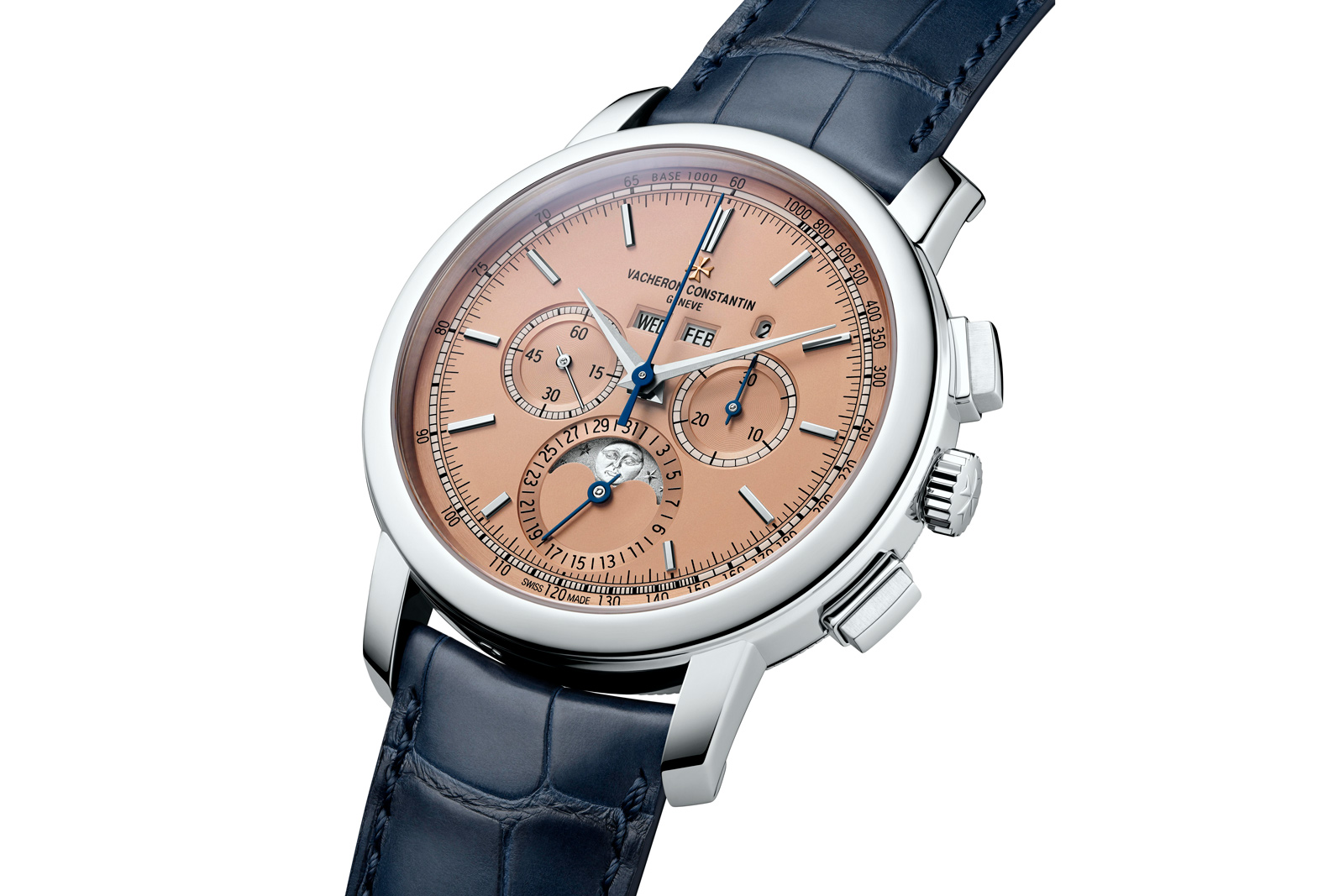 The highlight of the new Traditionnelle is the dial – the only element that’s different compared to the original launched six years ago. Though less intriguing because it’s popular and common today, the new dial is nevertheless a good move that gives the model a new lease of life.

While the rest of the watch apart from the dial isn’t new, it does have several features that make it stand out, most obviously the large, 43 mm case with a flat, wide bezel, a bold look for a relatively classical watch. 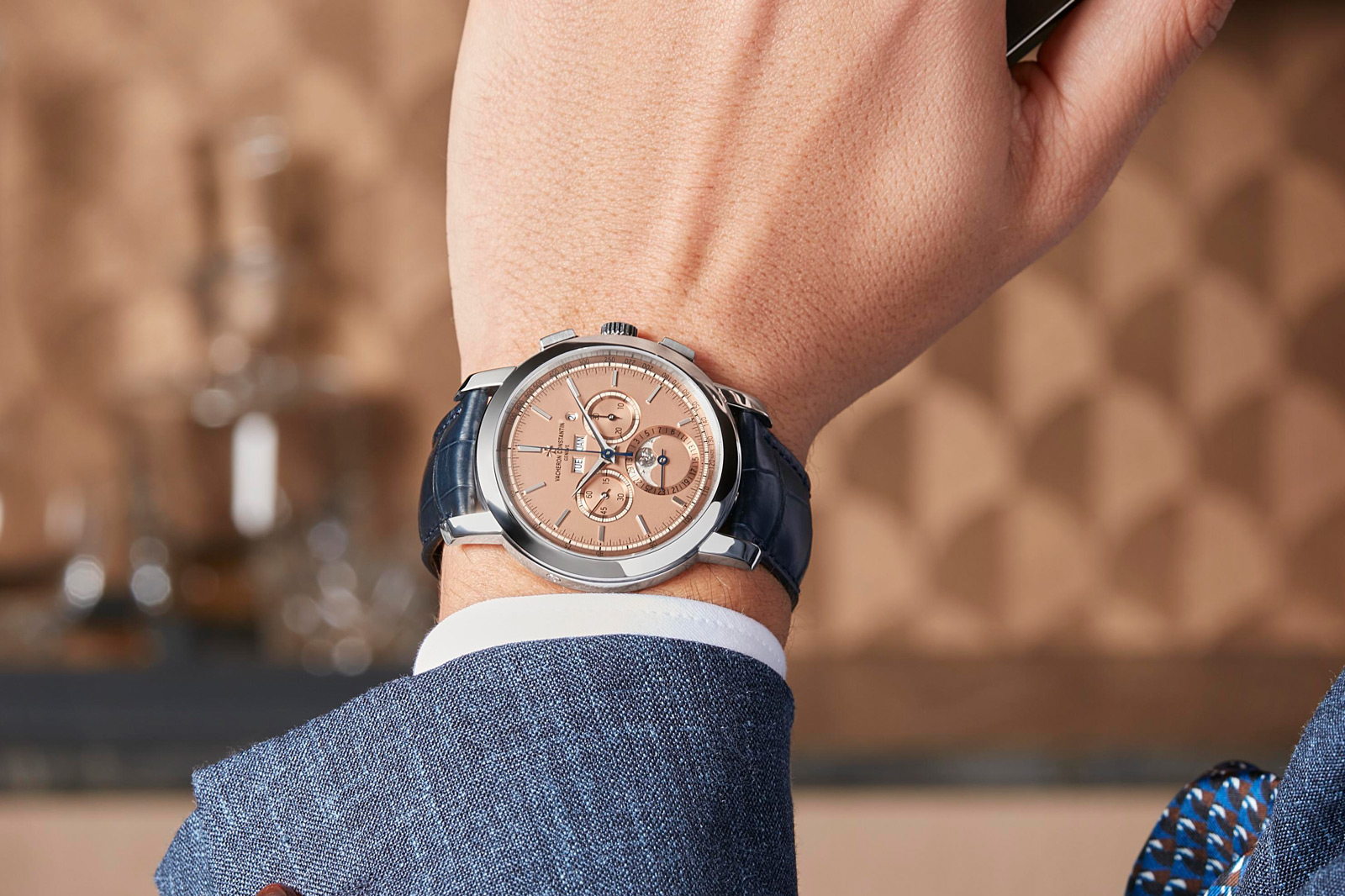 While the large diameter does improve the legibility of the complex dial, it will not appeal to traditionalists who favour smaller cases.

But the movement will certainly appeal to traditionalists. The cal. 1142 QP, which is based on the Lemania 2310, was long the movement of choice in a variety of old-school classics such as the Patek Philippe ref. 5970. Vacheron Constantin remains one of the few brands to rely on the calibre, since most of its peers now have their in-house equivalents.

The cal. 1142 QP is complicated movement executed in a straightforward manner with a lever-based perpetual calendar module sitting on the Lemania-derived base. That’s unsurprising since the construction of both the base movement and perpetual module are several decades old.

In typical Vacheron Constantin fashion, the movement is meticulously finished with rounded, polished anglage along the edges of the bridges as well as steel levers that even incorporate a few inward angles. And there are a few brand-specific accents as well, including the column wheel topped by a relief Maltese cross, the brand’s logo. 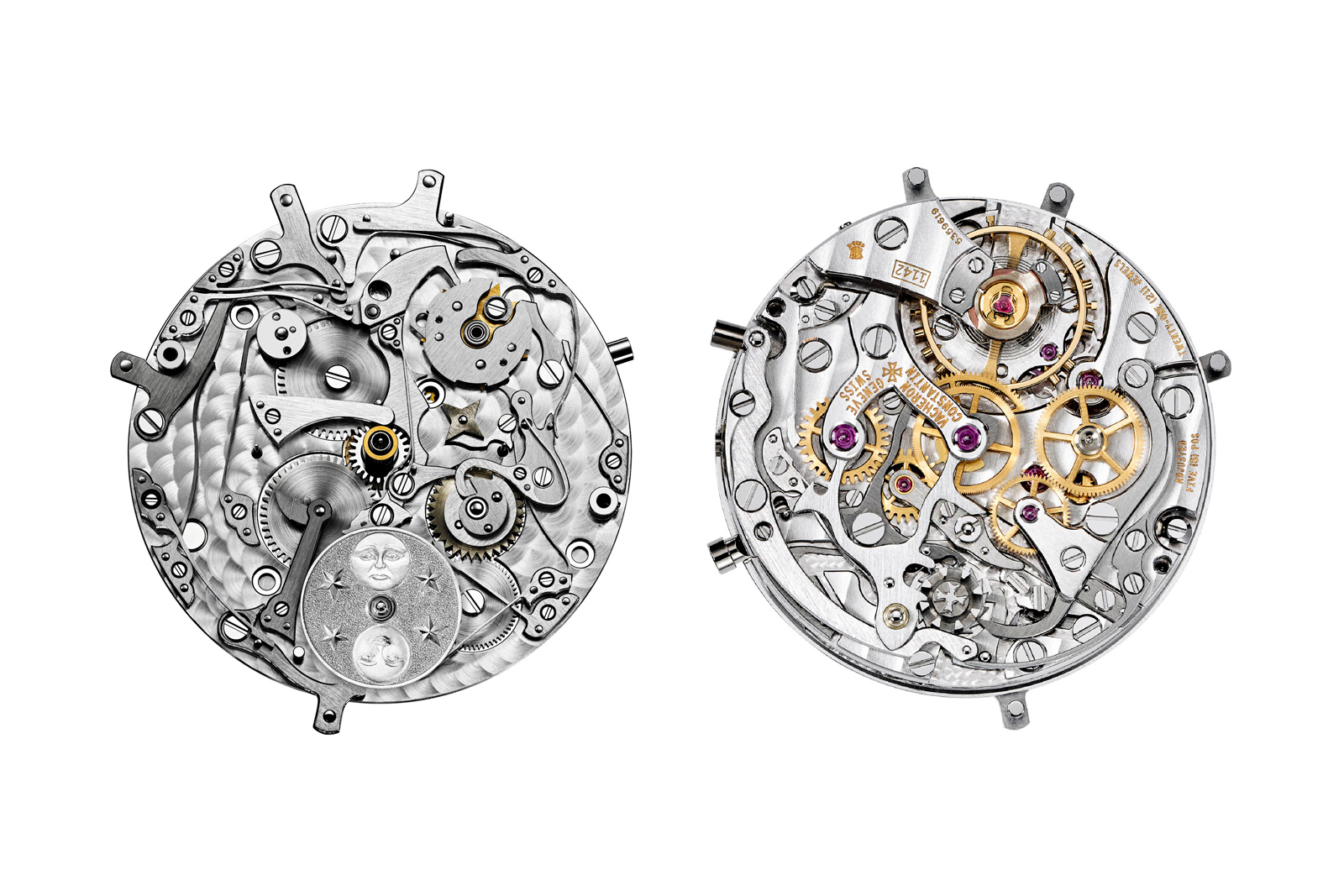 Because the moon phase wheel completes a revolution every 59 days, there are two moons “faces” on the same disc. Interestingly, the hand-engraved faces are rendered slightly differently, a subtlety that will be apparent only to the owner

The rest of the watch is quintessential Traditionnelle, which means a flat and wide case with a fluted case back rim that’s one of the visual flourishes on the relatively simple case.

The dial is easily recognisable as a Traditionnelle with its slim, applied markers as well as the sunken railroad tracks for the registers. Being finished differently, the registers give the dial texture and depth, but they appear to be clustered uncomfortably around the centre of the dial, a consequence of the oversized case relative to the movement diameter. 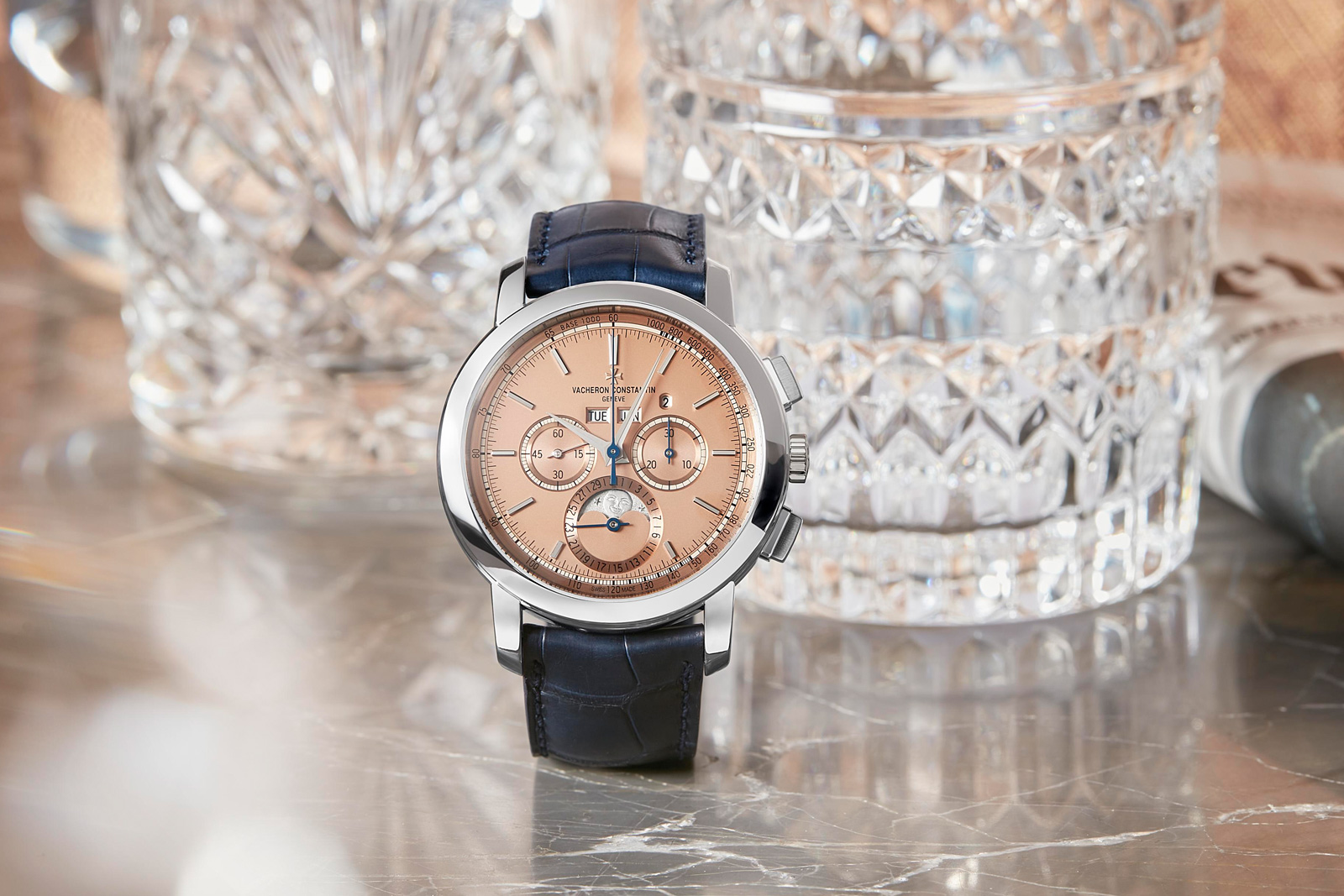 Limited edition: No
Availability: Only at boutiques
Price: Unavailable at press time