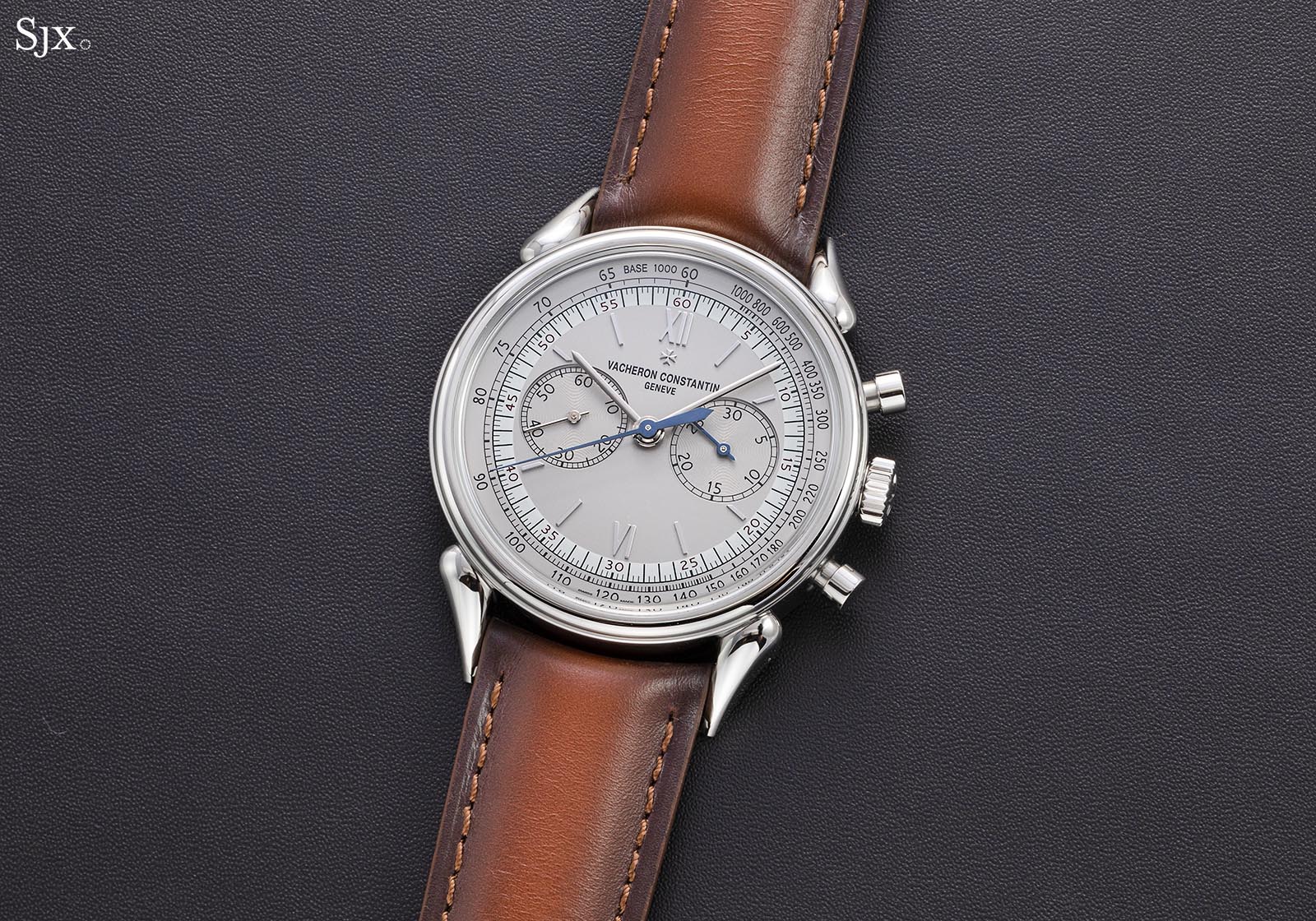 As modern, high-end chronographs go, the Vacheron Constantin Historiques Cornes de Vache 1955 is one of the most desirable, being a beautifully executed remake that’s faithful to the vintage original, while powered by an upgraded version of a well-regarded movement.

The latest version of the Cornes de Vache 1955 has a steel case, making it even more unusual amongst high-end chronographs, which are almost always found in precious metal cases. As a result, the Cornes de Vache is now significantly more accessible – while retaining the retro design and excellent movement – at least by the standards of such watches. 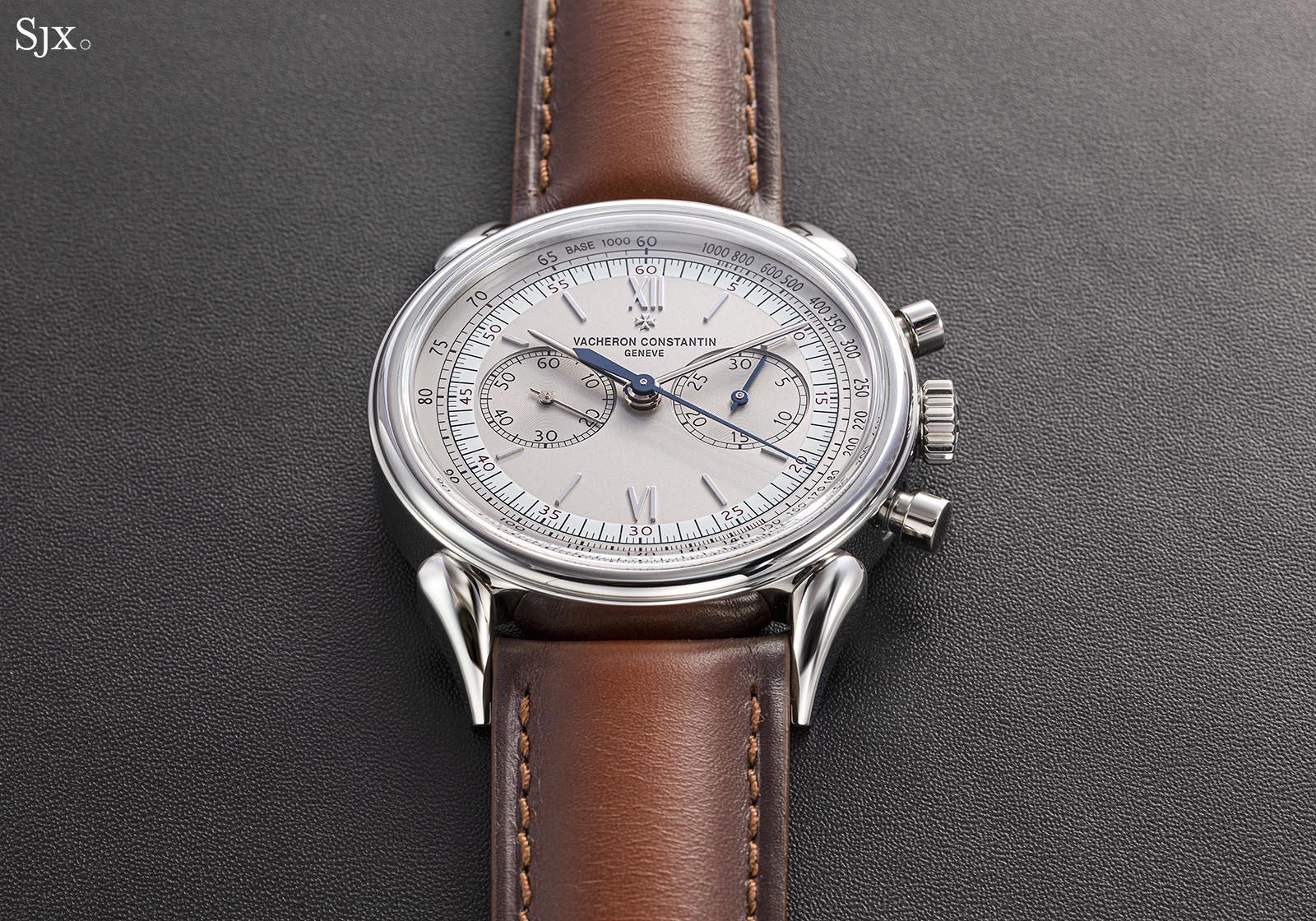 French for “cow horns”, Cornes de Vache comes from the shape of the lugs, a slight variation on the better-known “teardrop” lugs. The inspiration for the watch is the ref. 6087, the brand’s first water-resistant and anti-magnetic chronograph that was in production from 1955 to the mid-1960s – and featured the very same “cow horn” lugs. Made in yellow or pink gold as well as platinum, the ref. 6087 is rare – only 36 pieces were produced over a decade or so. 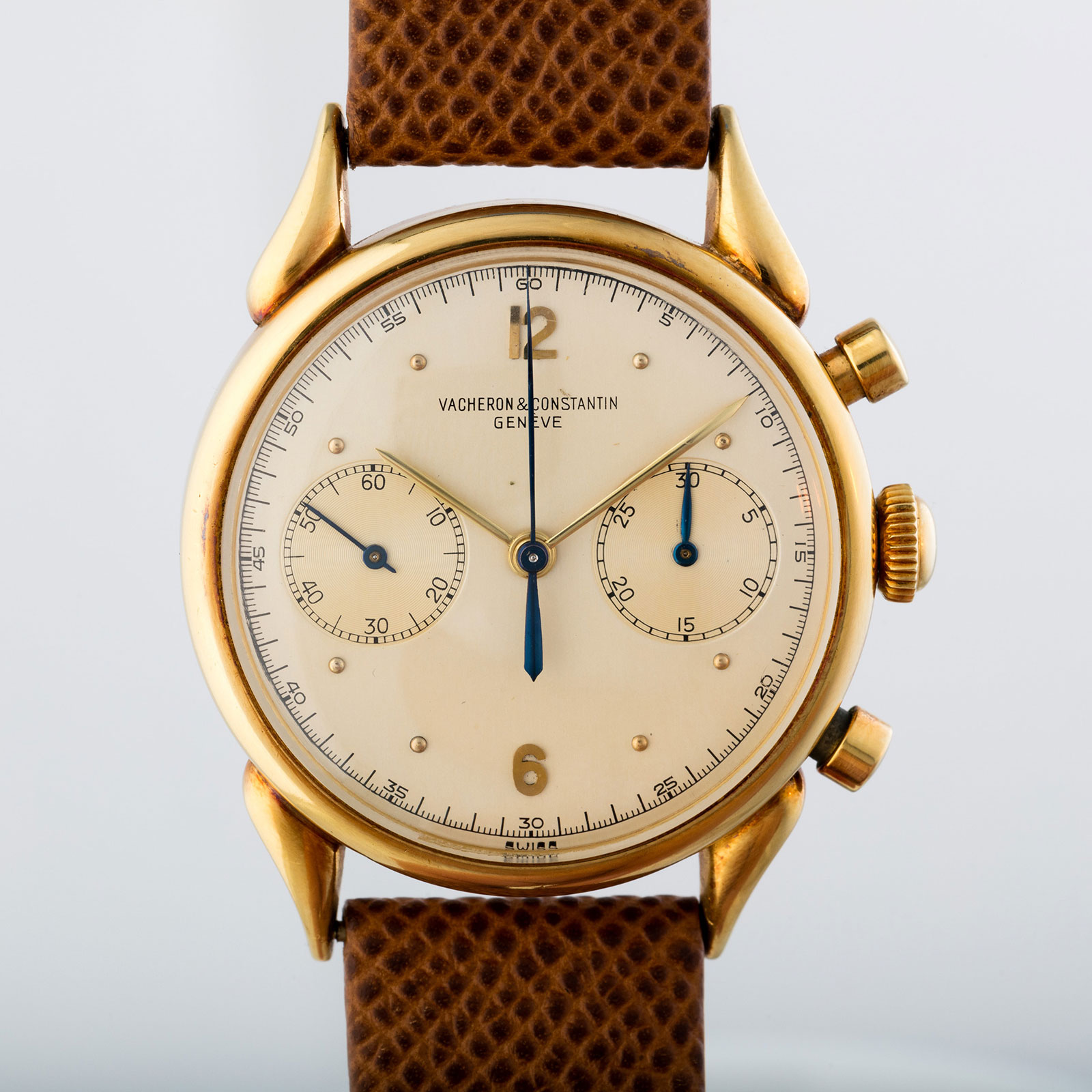 Like the vintage original, the modern-day Cornes de Vache was initially only available in precious metals: first in platinum, followed by pink gold, with the steel model only making its debut last year.

It is worth noting that steel is used sparingly by Vacheron Constantin, outside of the sporty Overseas and sporty-ish FiftySix, with the other few instances of steel cases in the current catalogue being the Historiques 1942 and 1948 triple calendars. Notably, the Cornes de Vache was first made with a steel case in 2017 when Vacheron Constantin debuted a 36-piece limited edition for American watch blog Hodinkee. The new steel model is exactly the same as the Hodinkee edition, aside from the dial.

Like most other vintage reissues, the case of the Cornes de Vache has increased substantially from original to remake, going from 35 mm up to 38.5 mm. That being said, the size of the modern watch strikes a balance between elegance and physical presence. The case has a substantial presence on the wrist, particularly with the horned lugs – in fact, the lugs make the case seem quite a bit larger than it is – but still cuts a profile. 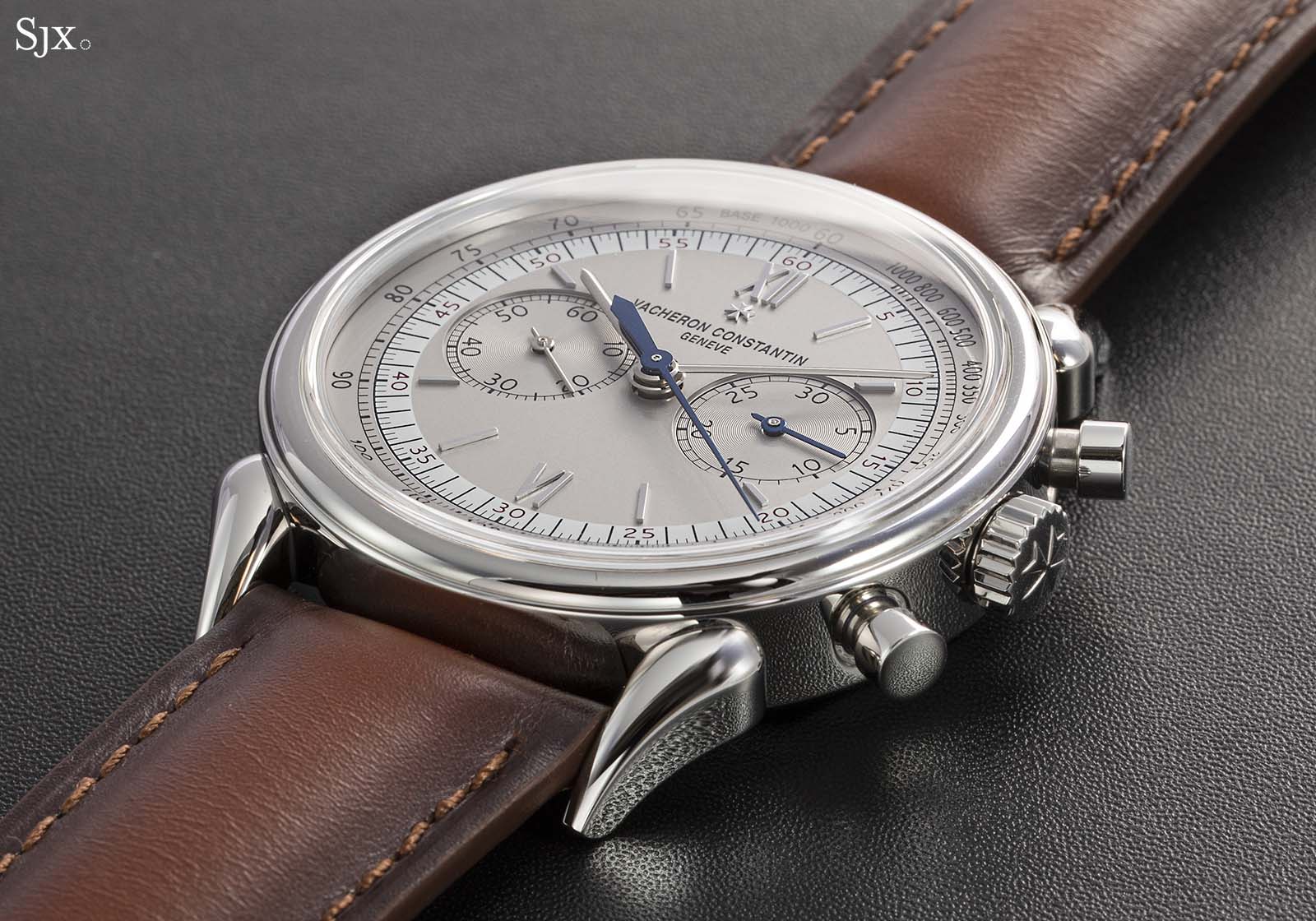 The single element that makes the character and appeal of the watch are the cow-horn lugs. Regardless of the case metal, they make a dramatic statement, giving the otherwise-classical design a sense of occasion. Add to that the entirely polished case, which accentuates the elongated lugs even more.

Intriguingly, even though the lugs appear pointed when looking at the watch face, the tips are actually rounded – perhaps a design choice made in the name of safety. 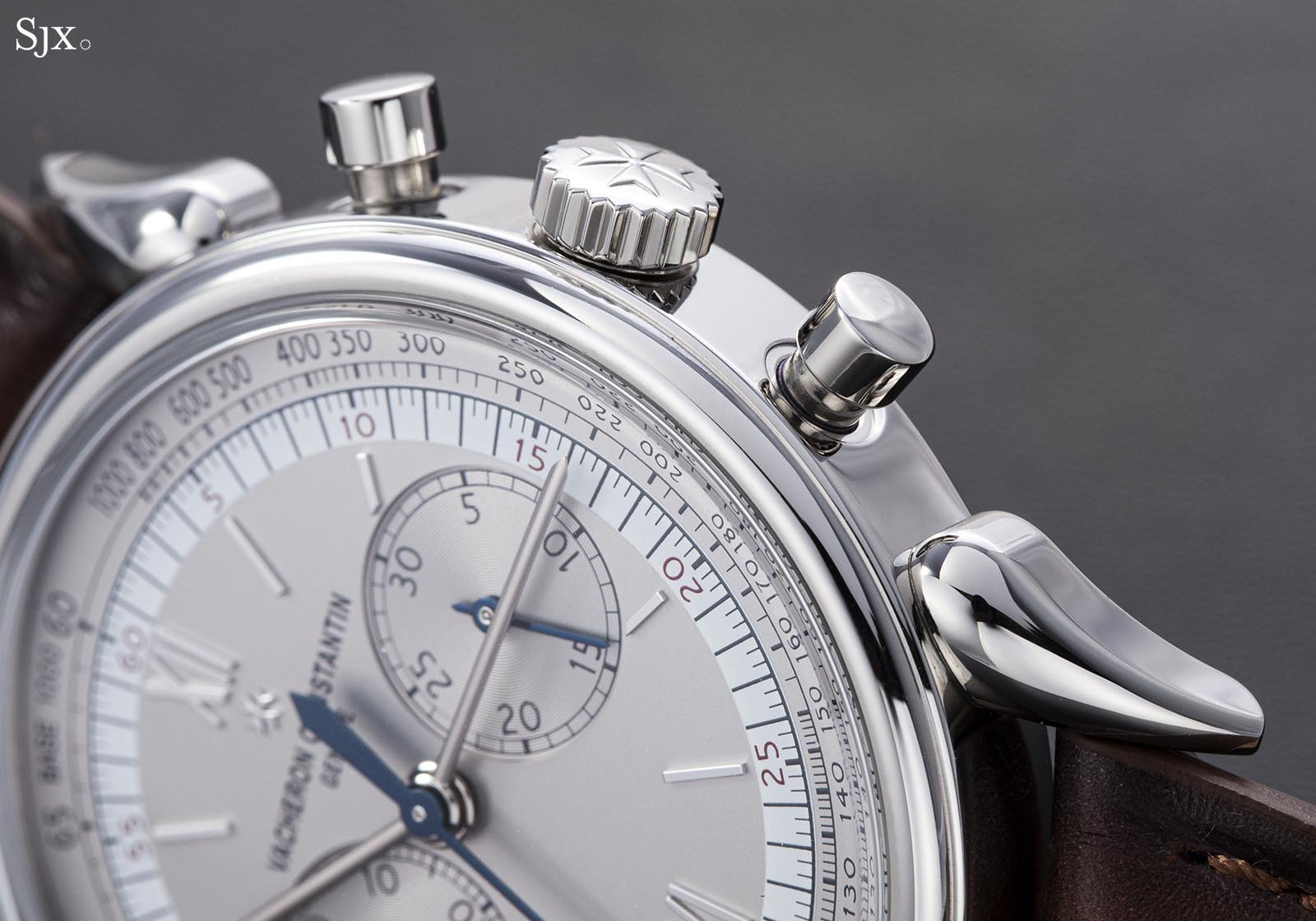 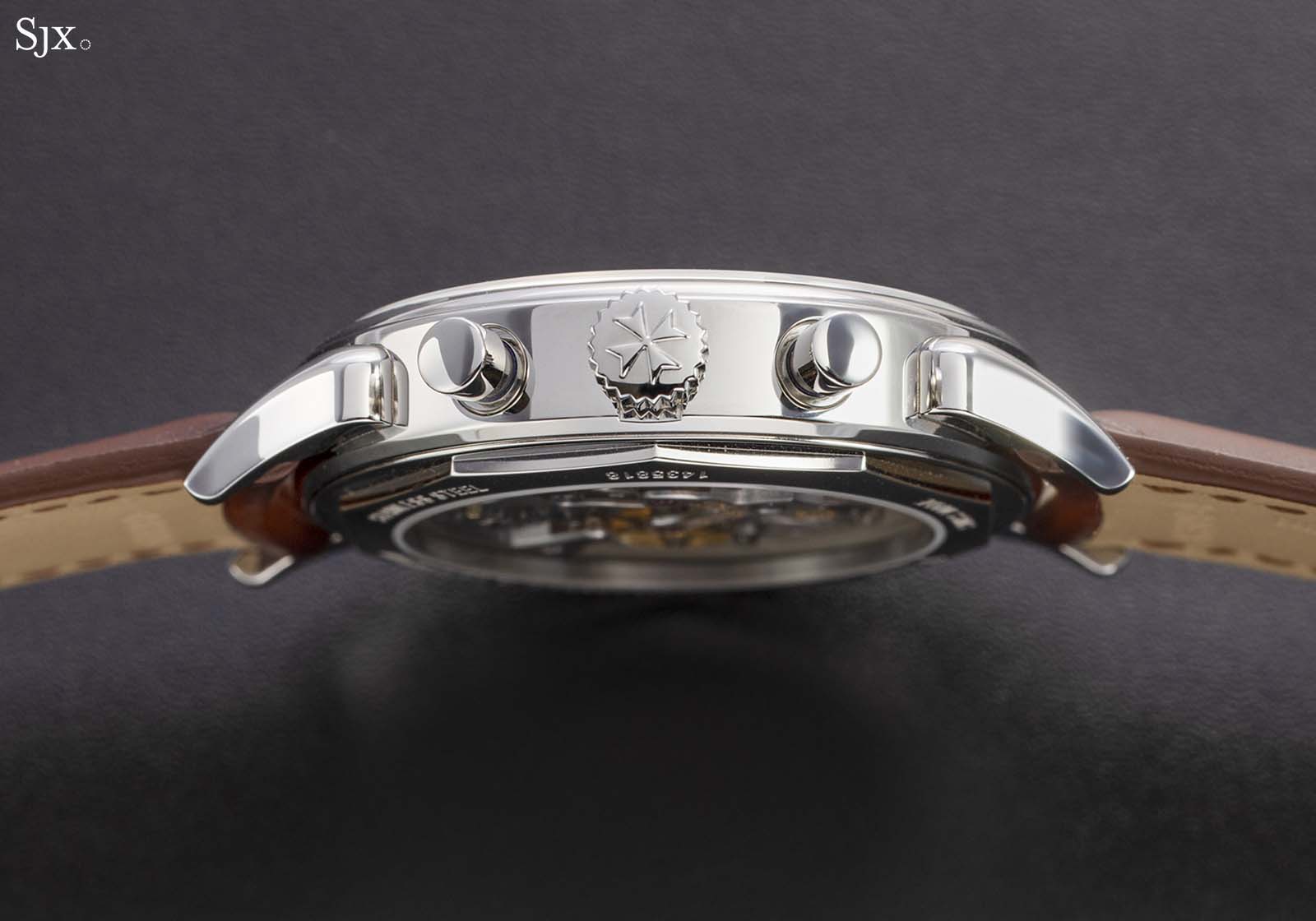 The case is uniformly finished with a polished surface all around, but fancy surface finishing is not appropriate for such a design. And the construction is rigid, with a screw-down back, which gives the impression of a robust case.

It is lightweight, however, which can be attributed to the material used. But the gold and platinum versions are also fairly light for the case size. The lightness is an advantage in terms of comfort on the wrist, though it probably indicates a large spacer ring is used inside to occupy the space between the movement and case walls.

One aspect of the case that doesn’t quite work is the strap. Though it is meant to be a point of differentiation – the strap is made by Italian leather-goods maker Serapian – it looks like it’s trying too hard to be fashionable and is underwhelming. Fortunately that’s an easy and no-cost fix since it can be replaced at the point of purchase.

Even though the case is modelled on a 50-year old design, the lugs are radical in shape. In contrast, the dial is studiously restrained. The design is identical to that found on the gold and platinum versions, with the differences being the colours.

The Cornes de Vache in steel has a pale grey dial that hews close to the look of the platinum version. But while the platinum model has a light-blue tachymetric scale, the steel version features a seconds track punctuated with red numerals.

A more adventurous dial design, more than just changing the colours, might have made the watch a lot more compelling, if done right. And it would have differentiated the base-model steel watch from its pricier brethren. But Vacheron Constantin played it safe, which is not a bad thing, but one wonders. 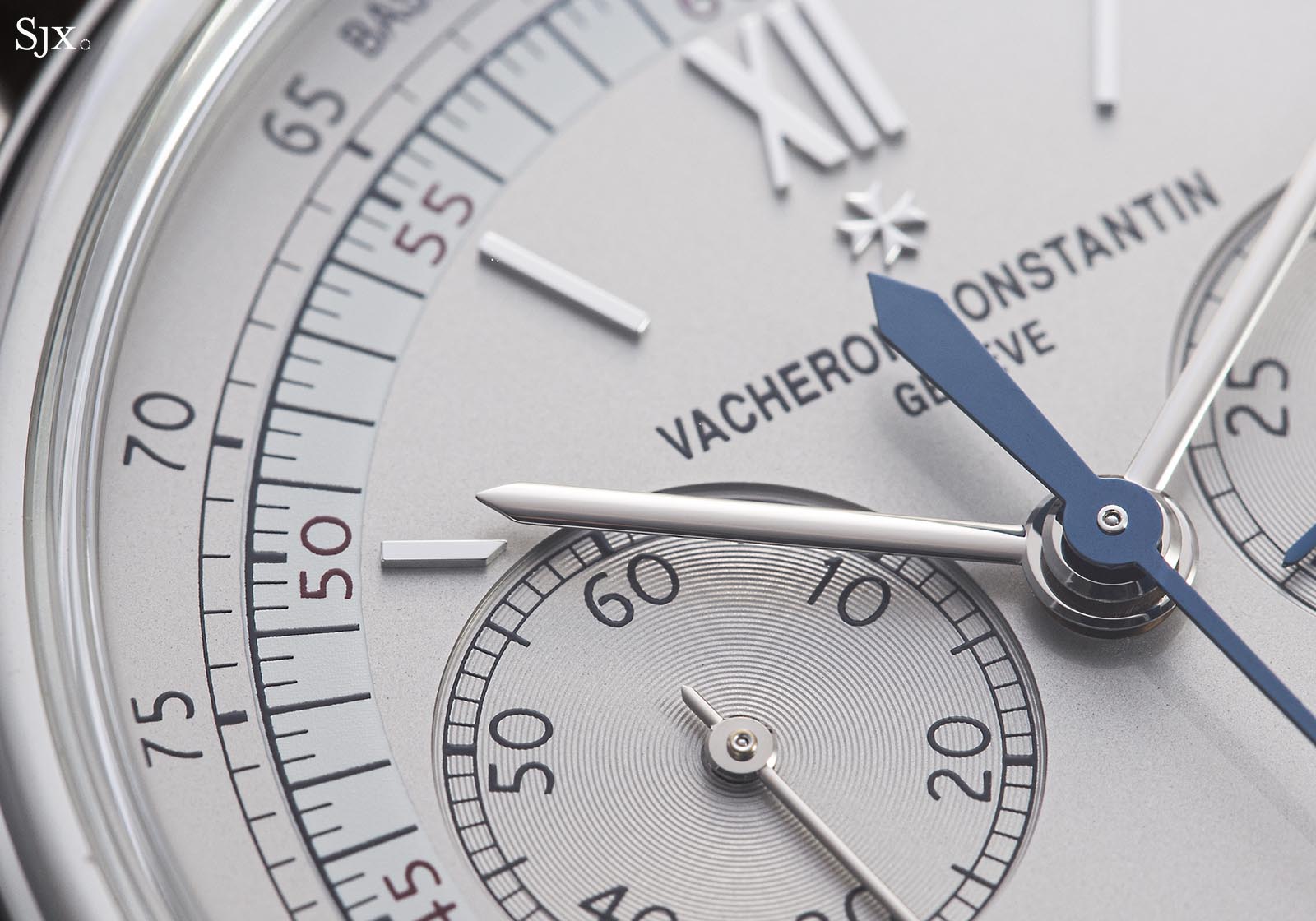 Its designers did get the dial proportions right.

Though the watch is enlarged relative to the vintage ref. 6087, the dial manages to retain excellent, if different, proportions. The sub-dials are larger than on the original, marking it out as a modern watch, but are well spaced away from the centre, and at the same time do not overlap the seconds track.

The pleasing dial layout is impressive given that the Lemania-based cal. 1142 inside is rather small at 27 mm in diameter. In fact, the modern-day cal. 1142 is 2.5 mm smaller than the cal. 492 (which was actually a Valjoux 23) found in the vintage original that was just 35 mm.

Relatively speaking, the cal. 1142 is a compact movement in a large case, but that is not too apparent from the dial. The space on the periphery of the dial is occupied by the smartly-sized tachymeter scale, as well as the red-accented seconds track. 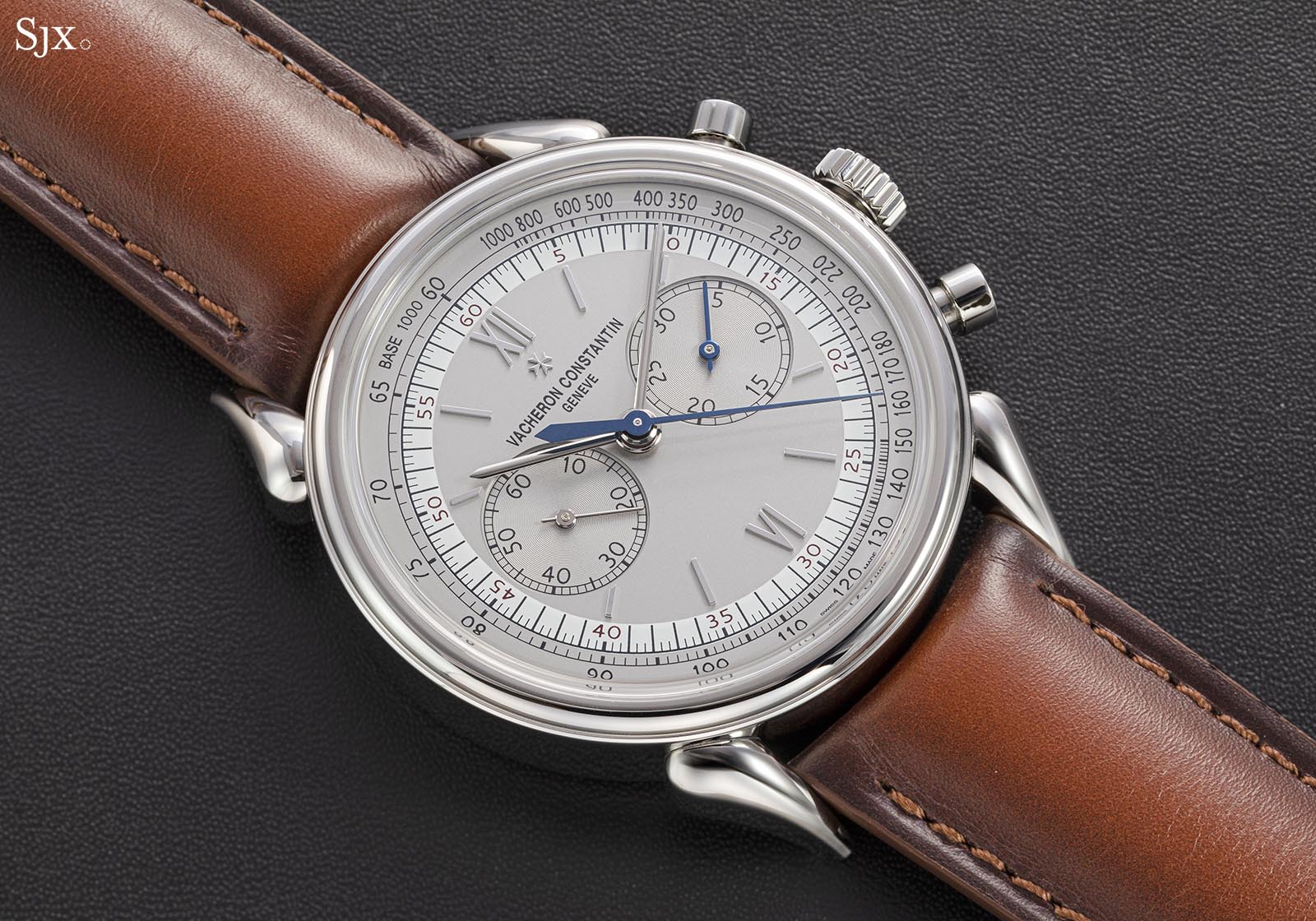 As is typical of modern Vacheron Constantin, the dial is excellent quality, doubtlessly in part thanks to the brand’s stake in dial-maker Les Cadraniers de Genève (with the rest being owned by F.P. Journe). The printing on the dial is notably tidy, with sharp edges found even on the markings on the textured sub-dials. The same can be said for the off-white track for the seconds.

All of the hour markers are in white gold, as are the hands – and also the tiny, applied Maltese cross below 12 o’clock. Both chronograph hands – the central seconds and chronograph minutes – are in blued steel, which brightens the otherwise rather monochromatic dial. 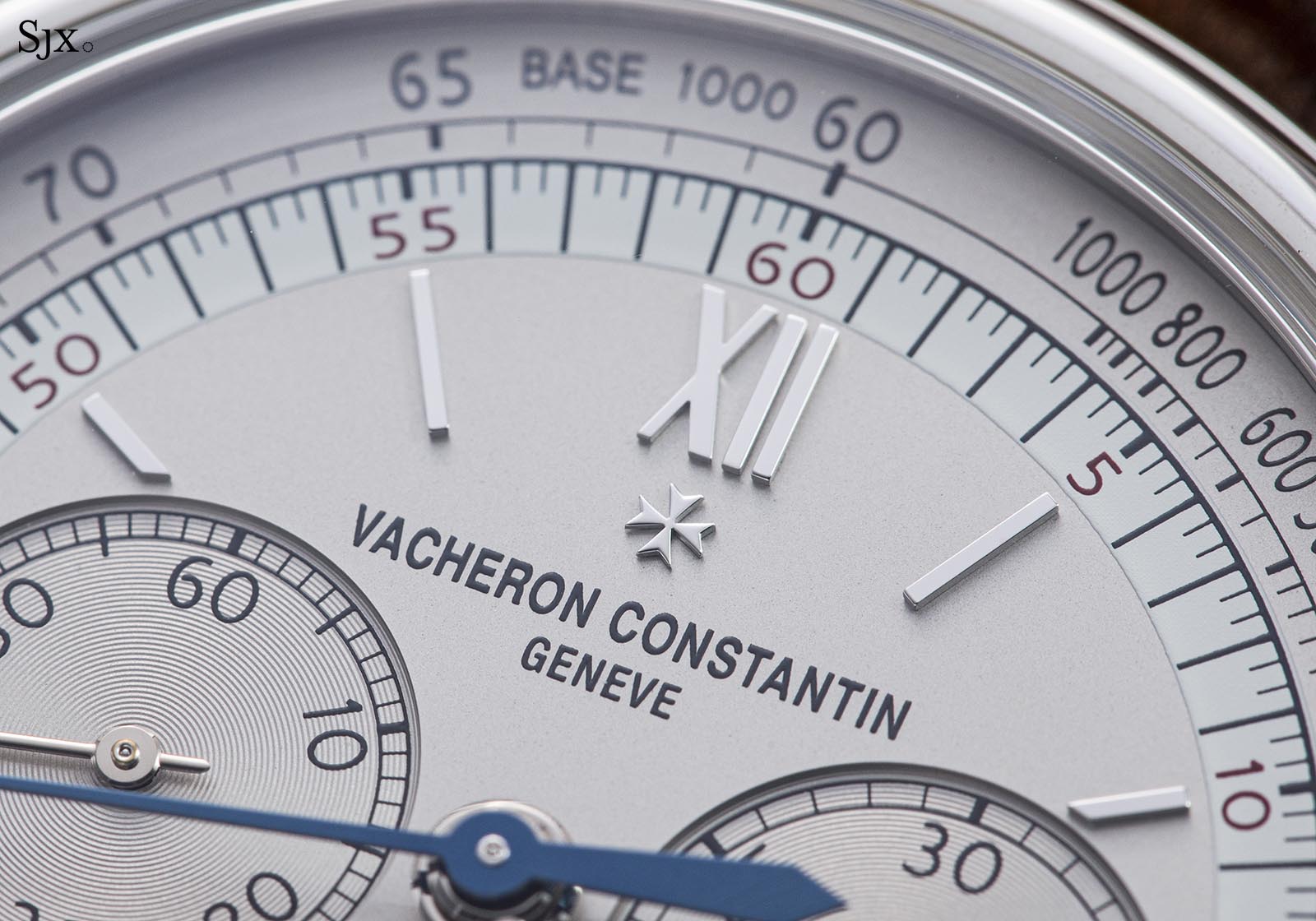 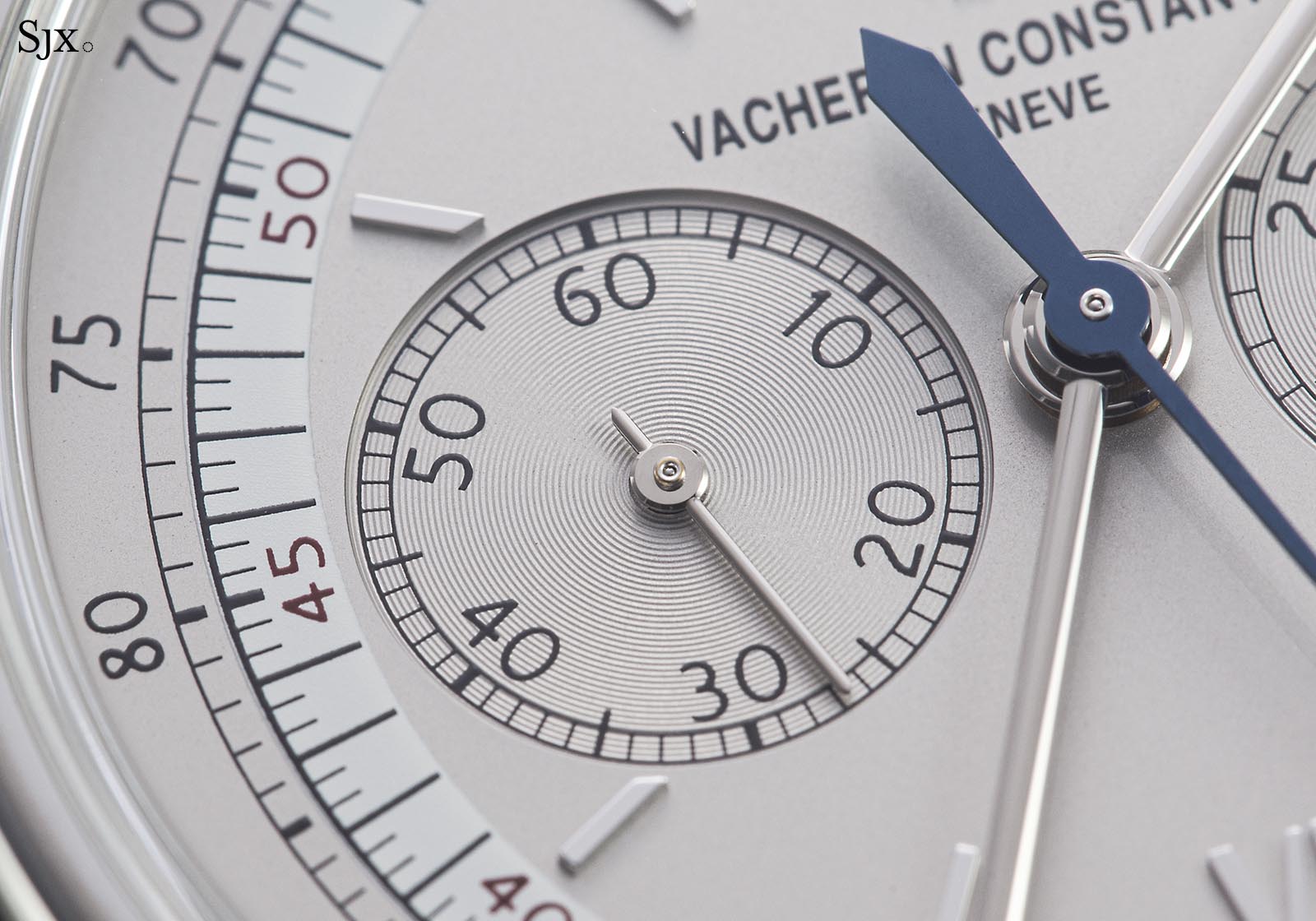 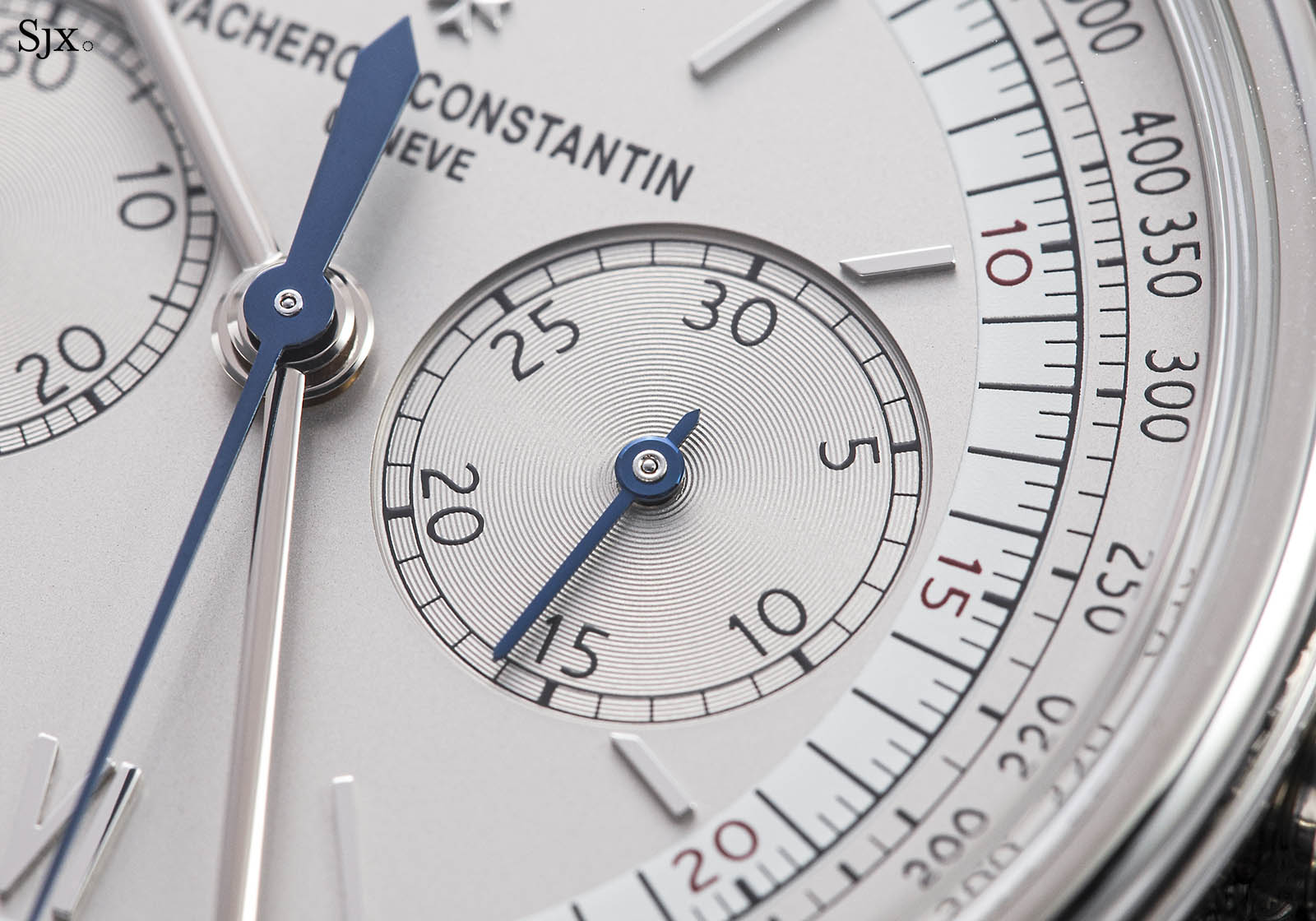 As important as the aesthetics of the Cornes de Vache is the cal. 1142 within. It is an eminently traditional chronograph movement – because it is based on a decades-old construction – and the proper sort of movement for a high-end, vintage-inspired chronograph.

Nouvelle Lemania, as the movement maker was once known, was integrated into Breguet over a decade ago and stopped supplying movements to external brands. Fortunately, Richemont, the Swiss luxury group that owns Vacheron Constantin, obtained the rights to produce the cal. 2320 when it took over Roger Dubuis in 2008, as the watch brand had acquired the license to produce various Lemania movements in the mid-2000s. 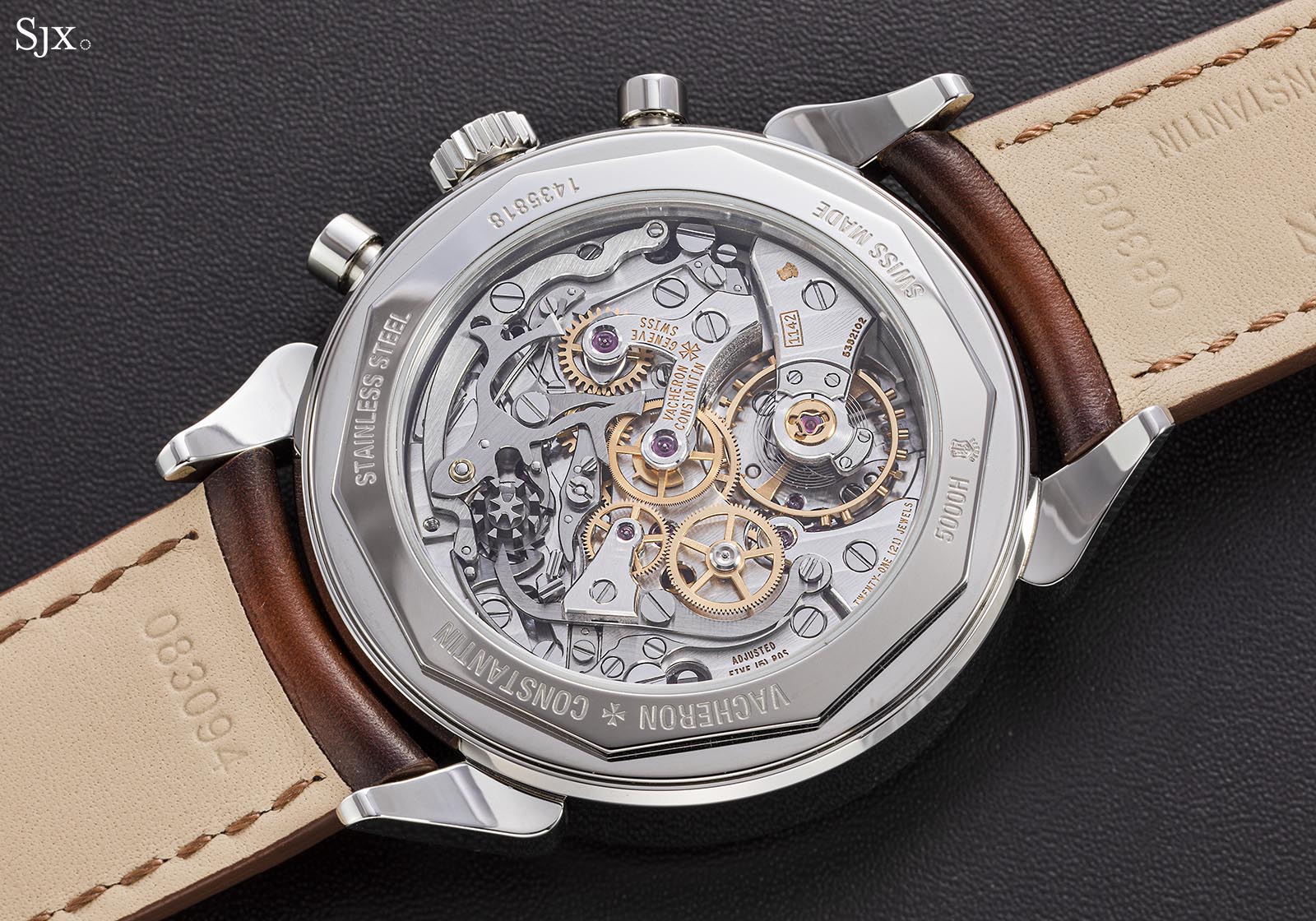 The original Lemania 2320 features a column wheel, horizontal coupling, large balance wheel with Breguet overcoil hairspring, and a needle regulator index. When Vacheron Constantin first started using the movement in the 1990s, it was essentially stock and rebadged as the Vacheron Constantin cal. 1140.

Subsequently Vacheron Constantin made several improvements to the movement, including upping the jewel count, installing a swan’s neck regulator, and well as extending longer power reserve, creating the cal. 1141.

The cal. 1142 is in the Cornes de Vache is an upgraded version of the cal. 1141 – the ultimate evolution of the Lemania 2320 in other words. Various technical upgrades were done to go from cal. 1141 to 1142, but one of the the most obvious differences between is Vacheron Constantin stamping its identity onto the movement with a relief Maltese cross  (which is actually a screw head) on column wheel hub. 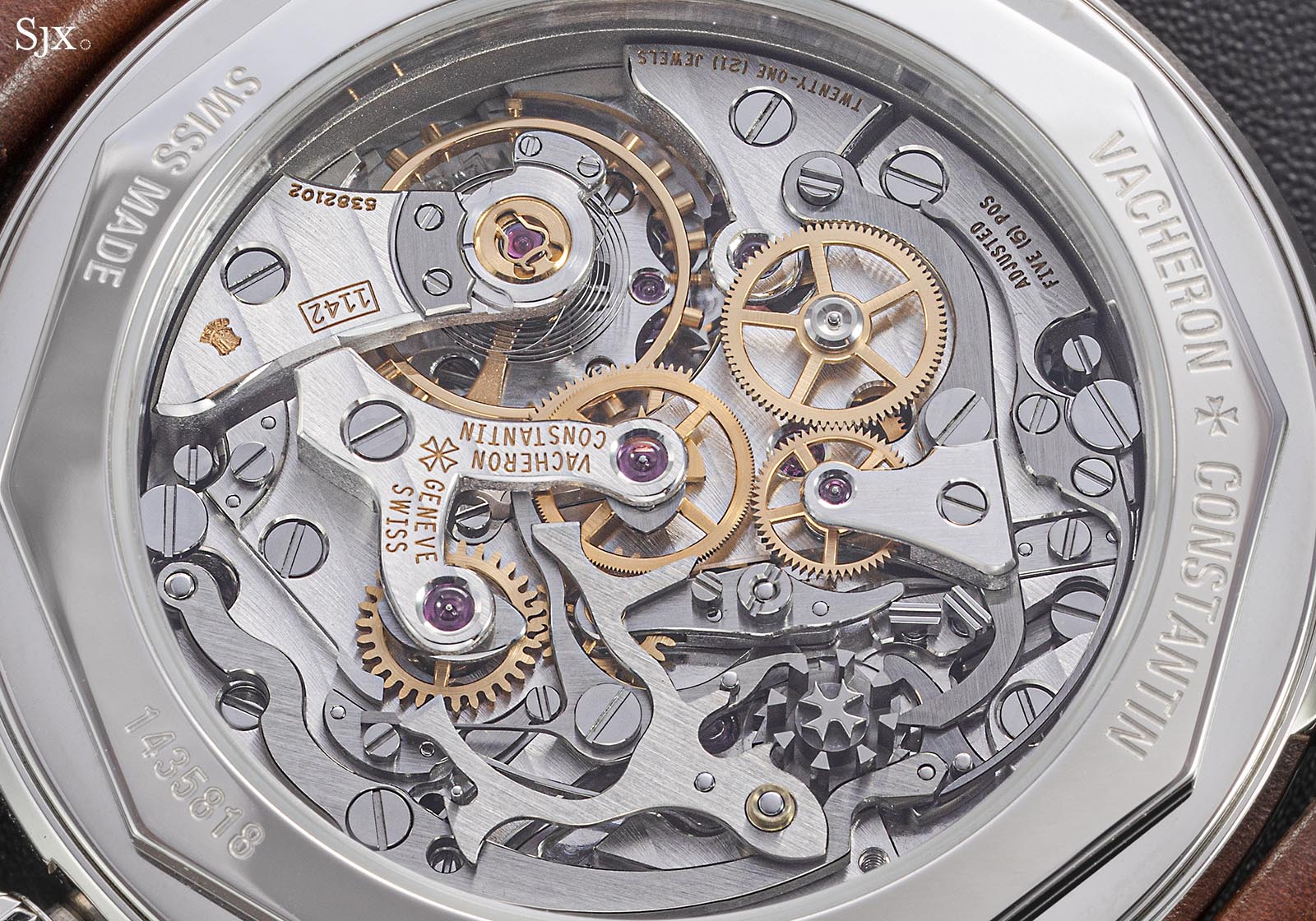 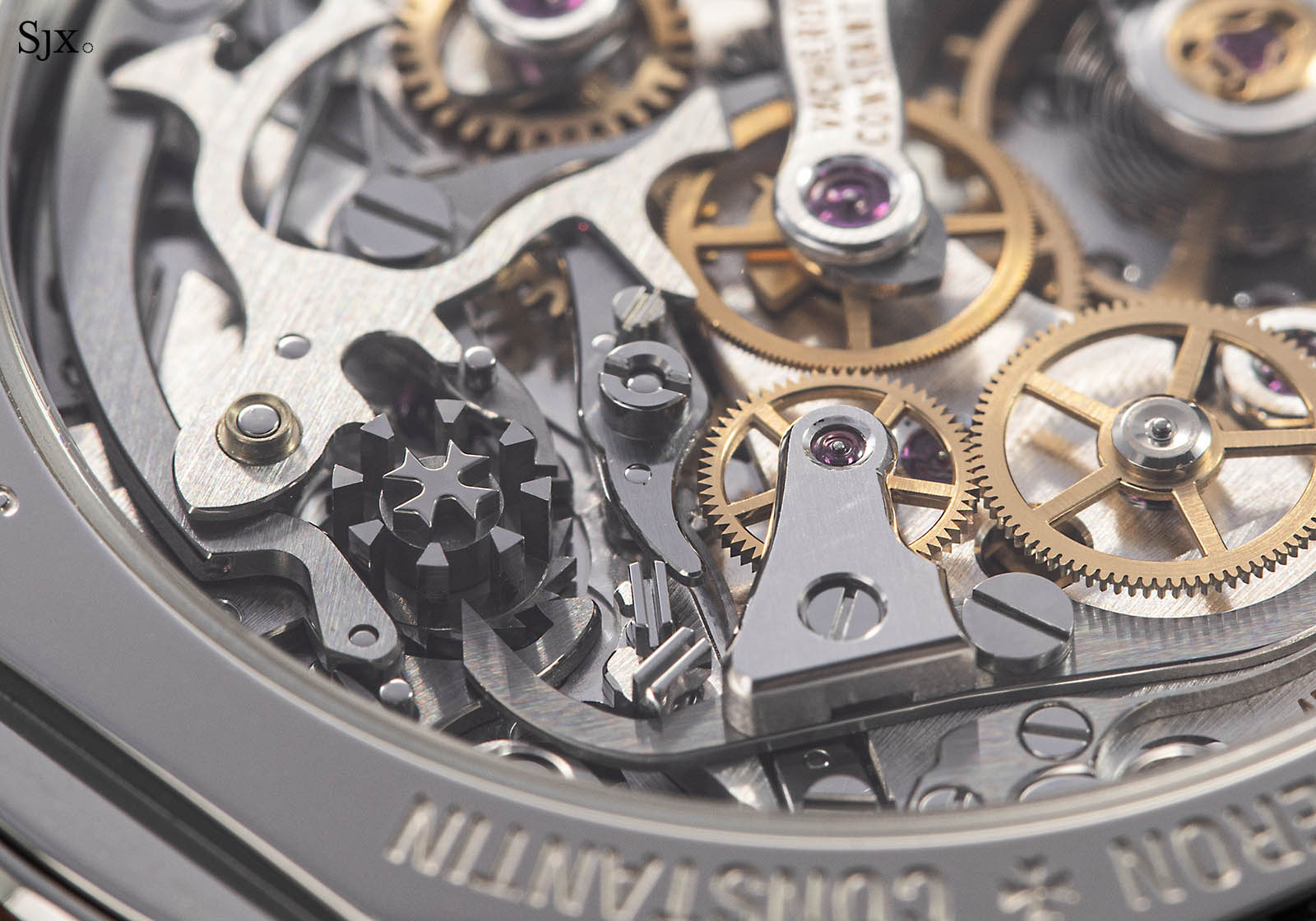 The Maltese cross on the column wheel

A less obvious technical upgrade is the simplified but more robust jumper spring for the minute wheel, which replaces the more complex wire-spring-and-click found in the cal. 1141 (and Lemania 2320). Being a single piece, the jumper spring is more robust and reliable, while being more visually attractive, since it does away with a wire spring – which never looks good in a haute horlogerie movement. 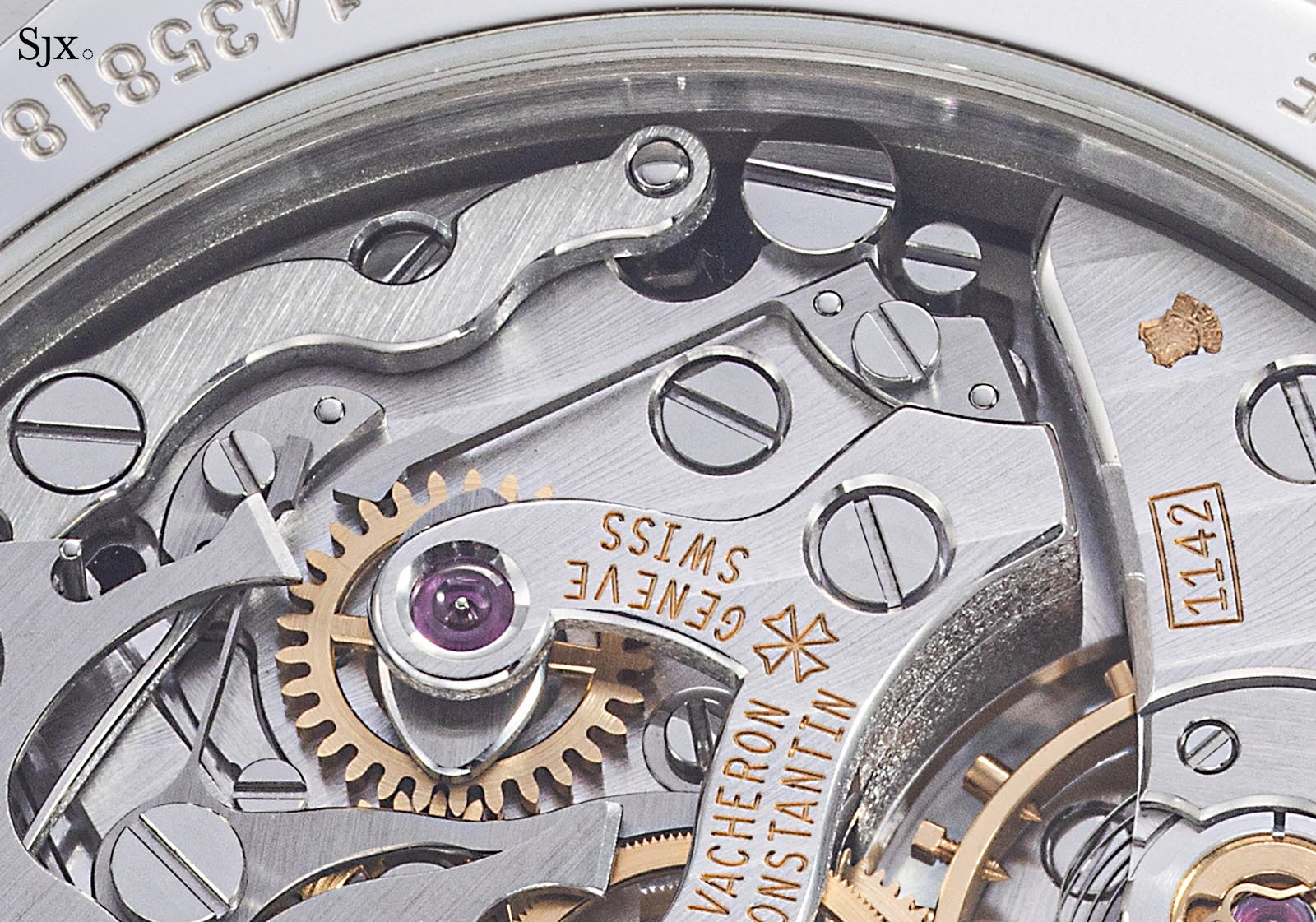 The jumper spring that controls the advance of the minute wheel, keeping it in position till the chronograph minute hand advances

Perhaps the most significant upgrade is the elimination of the swan’s neck regulator, and instead installing a free-sprung balance wheel. As a result, regulation is performed by adjusting the timing screws affixed to the rim of balance wheel, to increase or decrease its inertia. This method of regulation is theoretically more stable over time than relying on a regulator index.

At the same time, the balance wheel has been reduced in diameter, lowering its mass, which allows the balance to oscillate at a higher frequency of 21,600 beats per hour, or 3 Hz, making for more stable timekeeping. In comparison, the cal. 1141 operated at 18,000 beats per hour.

While many improvements were made to the movement, the revamp was not as extensive as done to the discontinued Patek Philippe CH 27, which was also based on the Lemania movement but has a fully supported chronograph clutch that pivots exactly over the fourth wheel.

In short, it is not as high-tech as the far newer Patek Philippe CH 29, or as convincingly old-fashioned as the Lange L951.1 in the Datograph, but the cal. 1142 is a strong contender. The cal. 1142 is a heavily-reworked – and substantially improved – Lemania 2320, making it a very, very good movement. 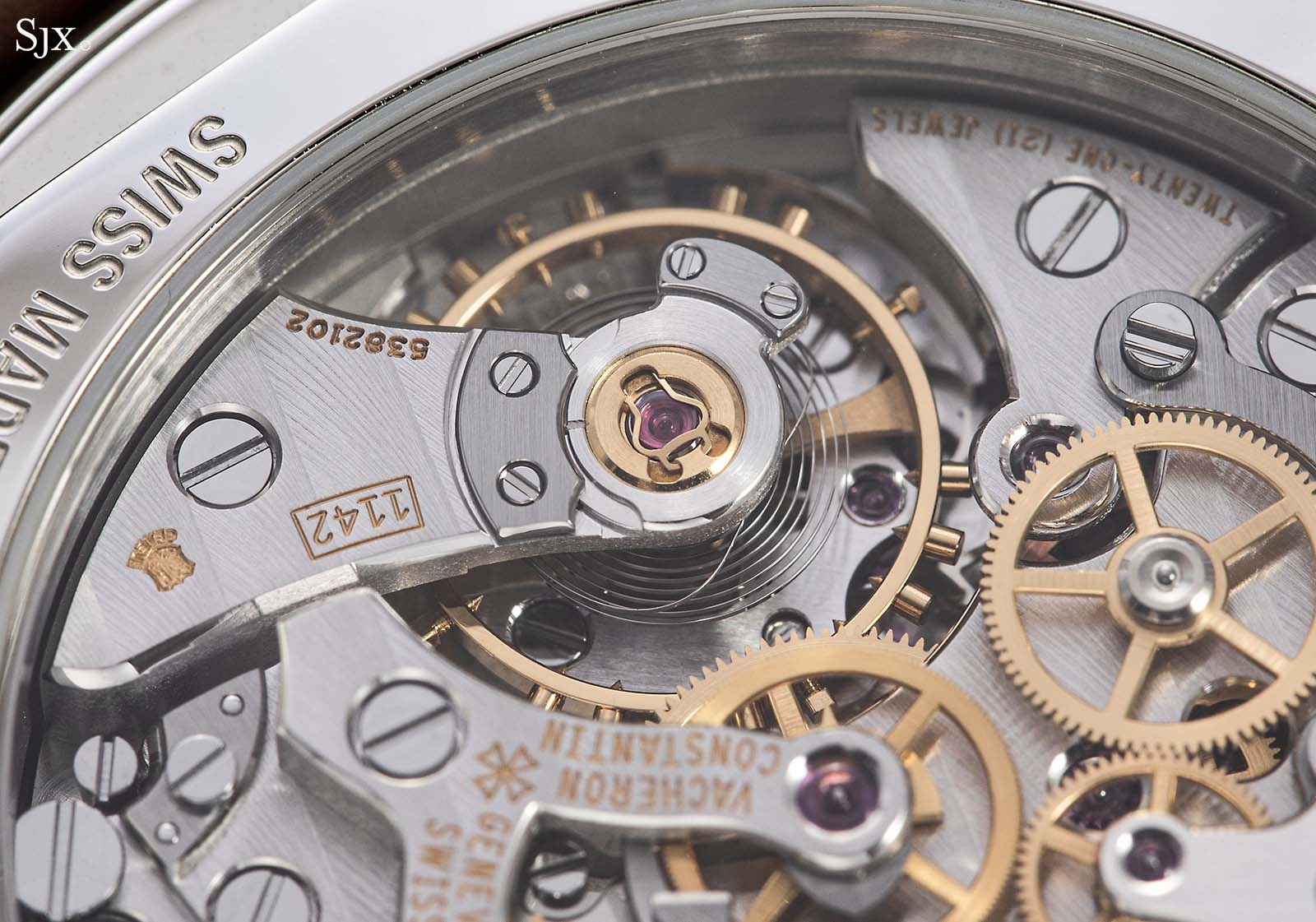 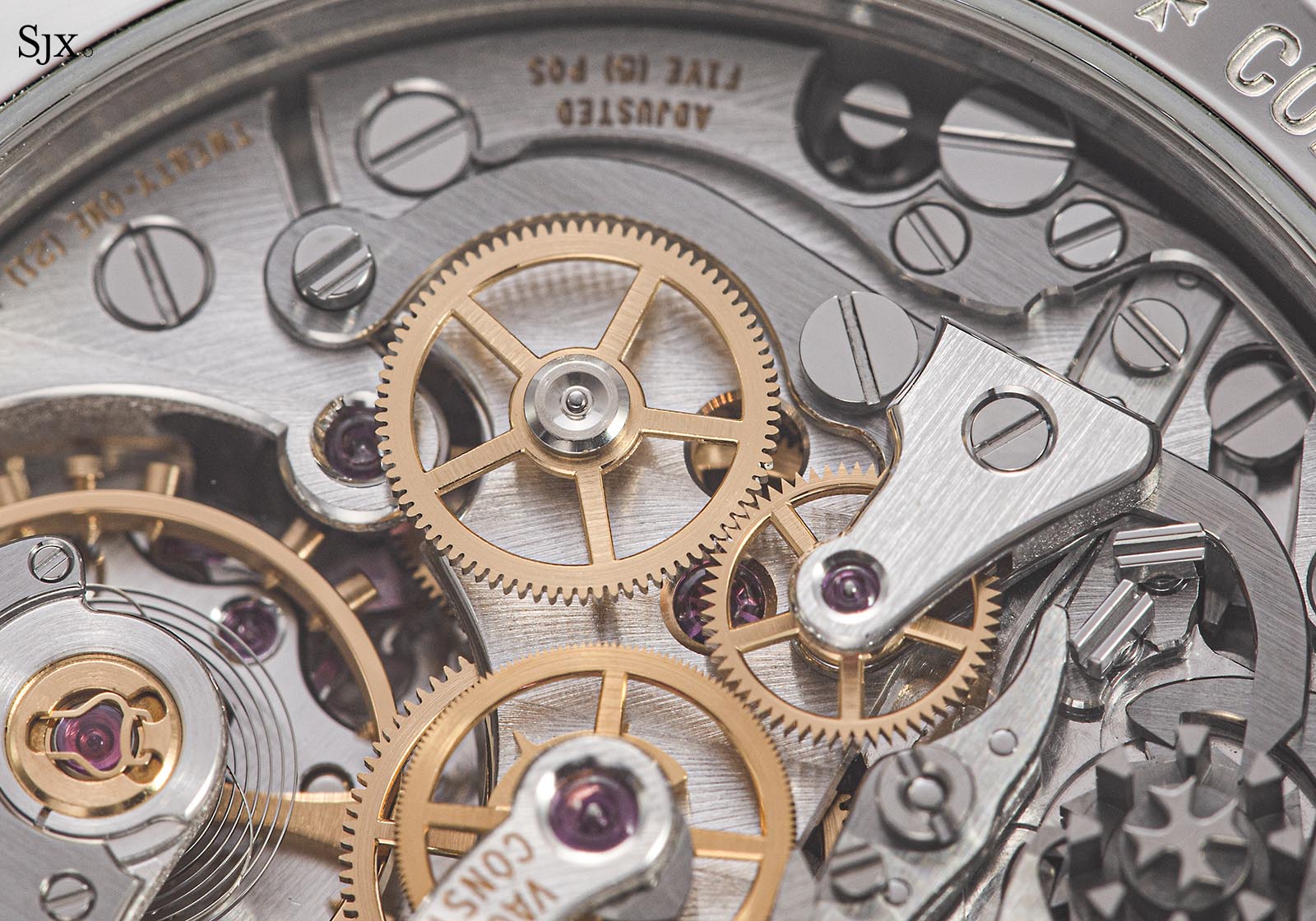 Beyond it technical accomplishments, the cal. 1142 is also decorated very well.

Hallmarked with the Poincon de Geneve, or Geneva Seal – primarily a decorative standard but also a functional one – the cal. 1142 is finished to a remarkable degree. Clean and refined across all components, the movement doesn’t try for unnecessary flourishes, and more importantly, the style is consistent with its vintage inspiration.

It shows Geneva stripes and polished bevels on the bridges that boast various inward angles. In fact, the finishing appears hand-applied, without almost no telltale marks of machine finishing, which can be found on some components of the Patek Philippe CH 29. 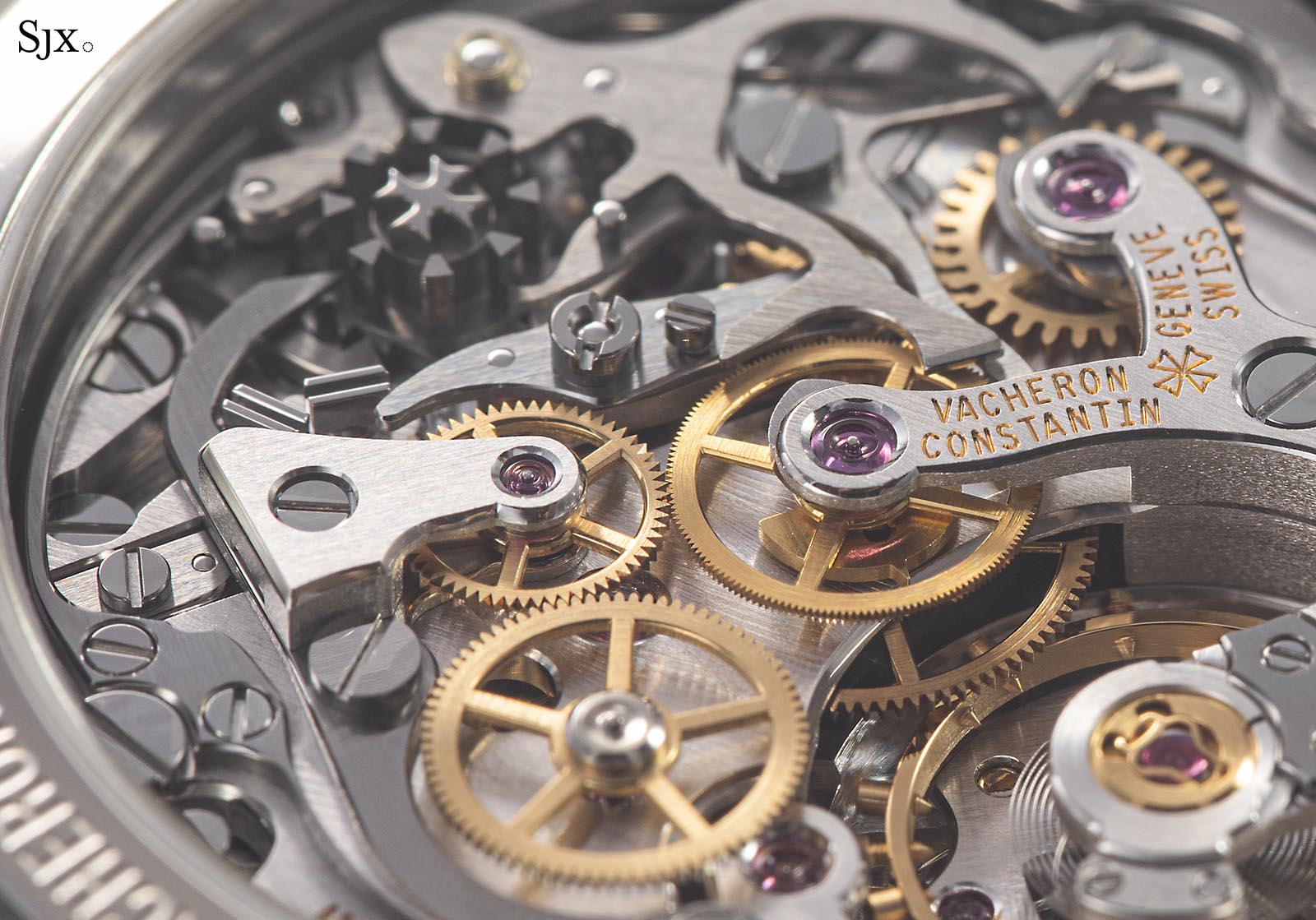 Even the tiny Maltese cross on the column wheel is mirror polished and also features polished, bevelled edges

The competition and concluding thoughts

In terms of proportions and design, the Cornes de Vache is one of the most beautiful chronographs on the market. It also has the strongest historical lineage, being almost a remake of a vintage timepiece. That said, the watch faces fierce competition in its segment, and in some cases, struggles to match the value proposition of its rivals.

For approximately US$10,000 less, the Montblanc 1858 Monopusher Chronograph in steel has even more vintage style, a similar degree of decoration, but a far older movement construction that originates in the 1920s. And for about US$4,000 more, there is also the 1858 Split Second Chronograph, which is mechanically more complex, but again powered by a movement rooted in the 1920s. Both Montblanc watches are also, well, Montblanc watches, and hence lack the cachet of a long-established watchmaker.

Lastly, there’s the Patek Philippe ref. 5172G that costs a bit over US$73,000, making it the most expensive of the lot. A good part of the premium is because Patek Philippe is the high horology watchmaker.

In the end, the qualities a collector values in a watch are subjective. All the better if he is culturally and historically inclined, or even better, a Vacheron Constantin fan.

Availability: Only at Vacheron Constantin boutiques
Price: US$39,800; or 58,500 Singapore dollars