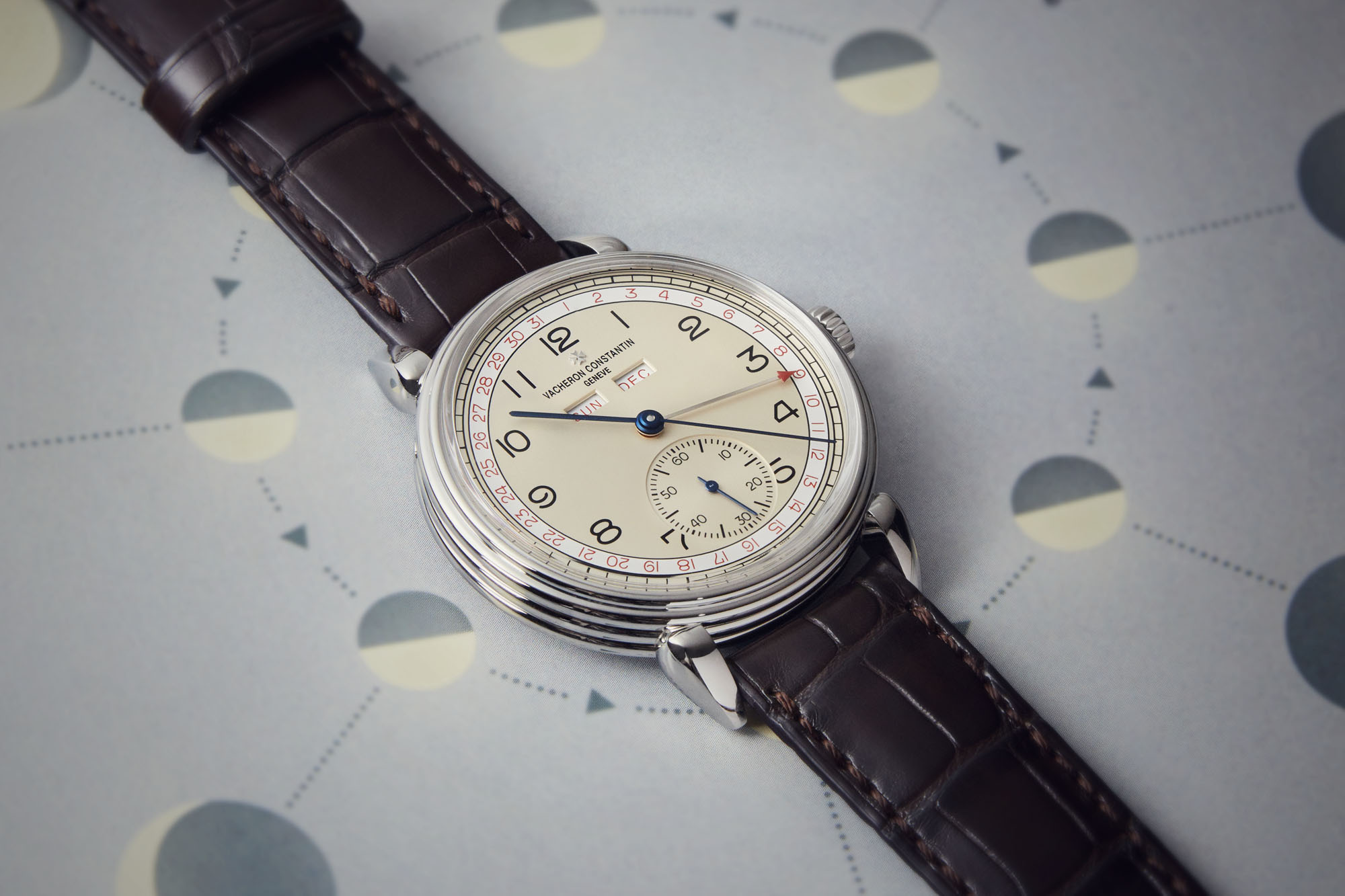 Just a few weeks ago Vacheron Constantin unveiled the Historiques Triple Calendrier 1942 and 1948, a pair of historical remakes sporting a familiar design but critically and commercially well received. The watches deserve the kudos; they are well executed.

Both watches are good remakes of the vintage originals, with the same dial layout in typical mid 20th century triple calendar style. The Historiques Triple Calendrier 1942 is in stainless steel, while the 1948 is available only in 18k pink gold.

Though obviously divergent in look and feel, the 1942 and 1948 share a few crucial details. Both are 40mm in diameter, a modest size by modern standards but they feel bigger on the wrist, likely due to the narrow bezel and pale coloured dials.

The cases also share an unusual, and attractive, “gadrooning” on the flanks. From the side the profile of the case appears as three stacked rings, topped by a smaller ring that’s the bezel. And equally appealing is the “box-type” sapphire crystal that mimics the domed Plexiglas found on vintage watches. Inside the duo have the same cal. 4400 (albeit with the addition of the moon phase on the 1948). It’s a largish hand-wound movement with a 65-hour power reserve that Vacheron Constantin installs in its higher-end watches, like the Historiques American 1921. Visually it’s straightforward, with two rather large bridges and a cock for a relatively small balance wheel. That means a vast expanse of rhodium-plated Cotes de Geneve, but up close the movement acquits itself well with the decorative touches expected of a watch bearing the Poincon de Geneve quality hallmark. On top is a conventional simple calendar module (meaning it’s neither annual nor perpetual), with the calendar displays advanced via recessed pushers on the side. The moon phase version (the cal. 4400 QCL in the 1948) has a moon phase that errs by a day in 122.5 years, which is the industry standard.

While not technically novel the 1942 and 1948 are historically correct, since the vintage originals were also simple calendars. That being said, some modernity in function would have been a big plus.

Based on the ref. 4240L, the Historiques Triple Calendrier 1948 is pricier, but fancier than the steel model, and not just because of the gold case.

Most obviously the 1948 has a moon phase, which the steel model lacks. Less prominent but perhaps more important in its refined feel are the details: the dial has applied hour markers, including large Romans with facetted surfaces at the quarters, and arrowheads every five minutes. Similarly, the windows for the calendar have thin gilded frames. While the added flourishes are small, they give the watch a more expensive appearance, and also render it more distinctly modern.

To match the hands are gilded, but all four (hours, minutes, seconds and date) are stamped and polished, leaving them feeling slightly flat. And the minute hand is oddly narrow relative to the hour hand; something that’s not apparent but hard to miss once spotted.

It’s also worth pointing out the “claw” lugs on the 1948 are gently shaped, and less pronounced than those on the 1942, giving it a sleeker and more elegant feel. Two versions of the 1948 are available, both limited to 200 pieces each. Both gold versions are identical save for the colour accents, either red or blue. The blue is a more predictable look, with the blue moon phase being easy to digest. In contrast the red is unusual, reminiscent of a faded (even tropical?!) vintage watch, and arguably more striking. Bulbous “claw” lugs boost the presence of the watch, a helpful quality given that the steel case is more lightweight than its gold counterpart. Part of the regular collection, that is to say not a limited edition, the 1942 is more convincingly vintage. The simple, almost plain, dial with printed markings is as it would be on a 1940s watches, with the sole concession to contemporary haute de gamme watchmaking being the applied Maltese cross logo at 12 o’clock.

Visibly two-tone, the dial is a creamy silver with a white date track. Two versions are available, differing only in the colour of the calendar indications, which are either blue or red. Both are similarly attractive, but the red version feels more retro, being the same colour as the originals.

The steel 1942 has the same hands as the gold model, except the hands for the time are blued instead of gold-plated. The dash of colour helps alleviate their flatness, though the minute hand is still reed thin. Unsurprisingly, the 1942 is the stronger proposition of the pair, presumably why it is not a limited edition.

Both the 1942 and 1948 are already available at Vacheron Constantin boutiques, with authorised retailers slated to receive them soon.

Including one in steel.