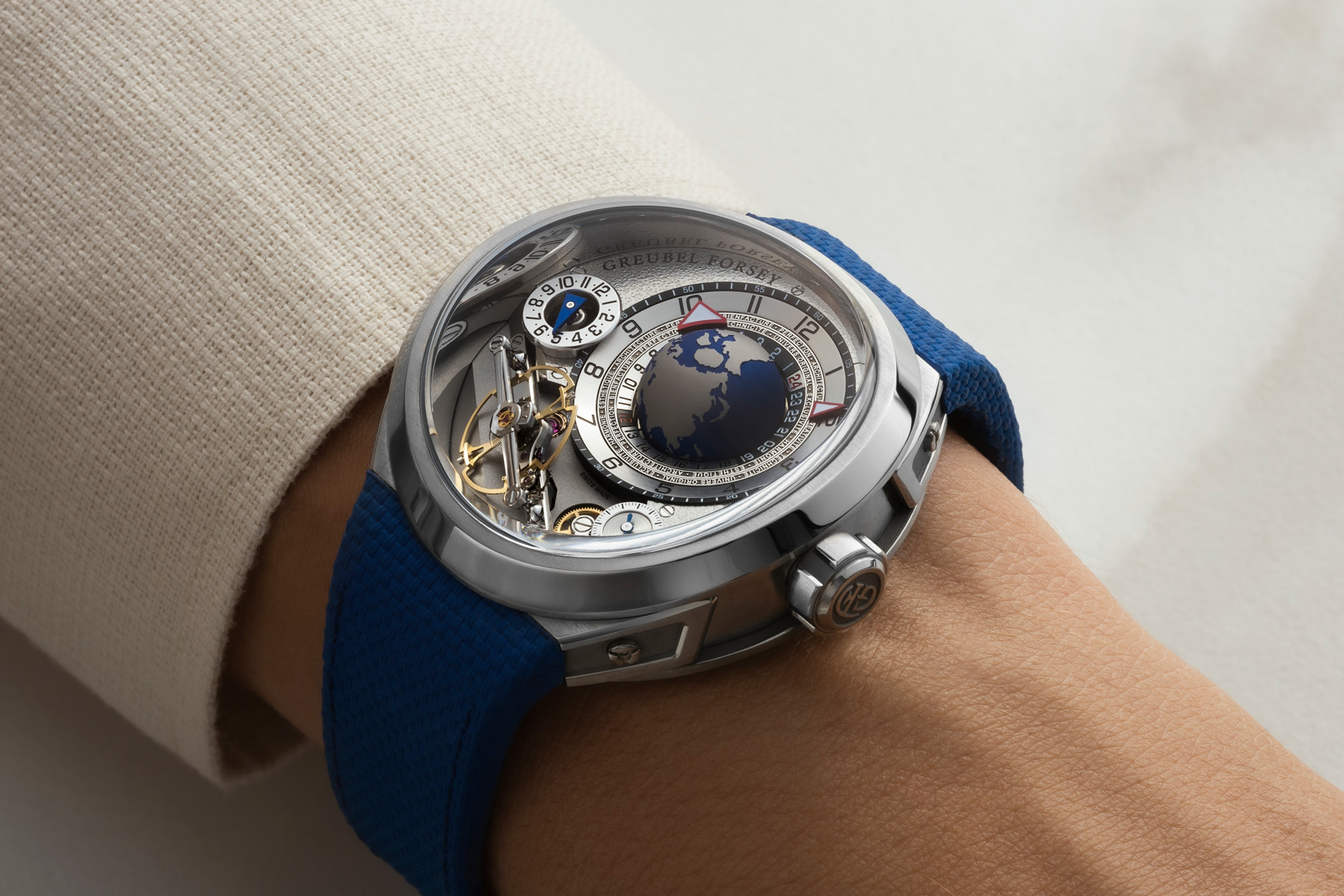 Having made its debut in Greubel Forsey’s watches a decade ago, the world time is one of the brand’s distinctive complications with its large titanium globe. While the original iteration of the world time wristwatch came to an end last year with the all-black final edition, Greubel Forsey has taken the covers off its successor, the GMT Balancier Convexe.

The three-dimensional world time sphere has been retained, but almost all else has been redesigned on the new model. Beside adopting the streamlined aesthetics of the brand’s bestselling sports watches like the Balancier S2, the display now has local and world time arranged concentrically in a traditional, Louis Cottier-style display in a first for the brand. 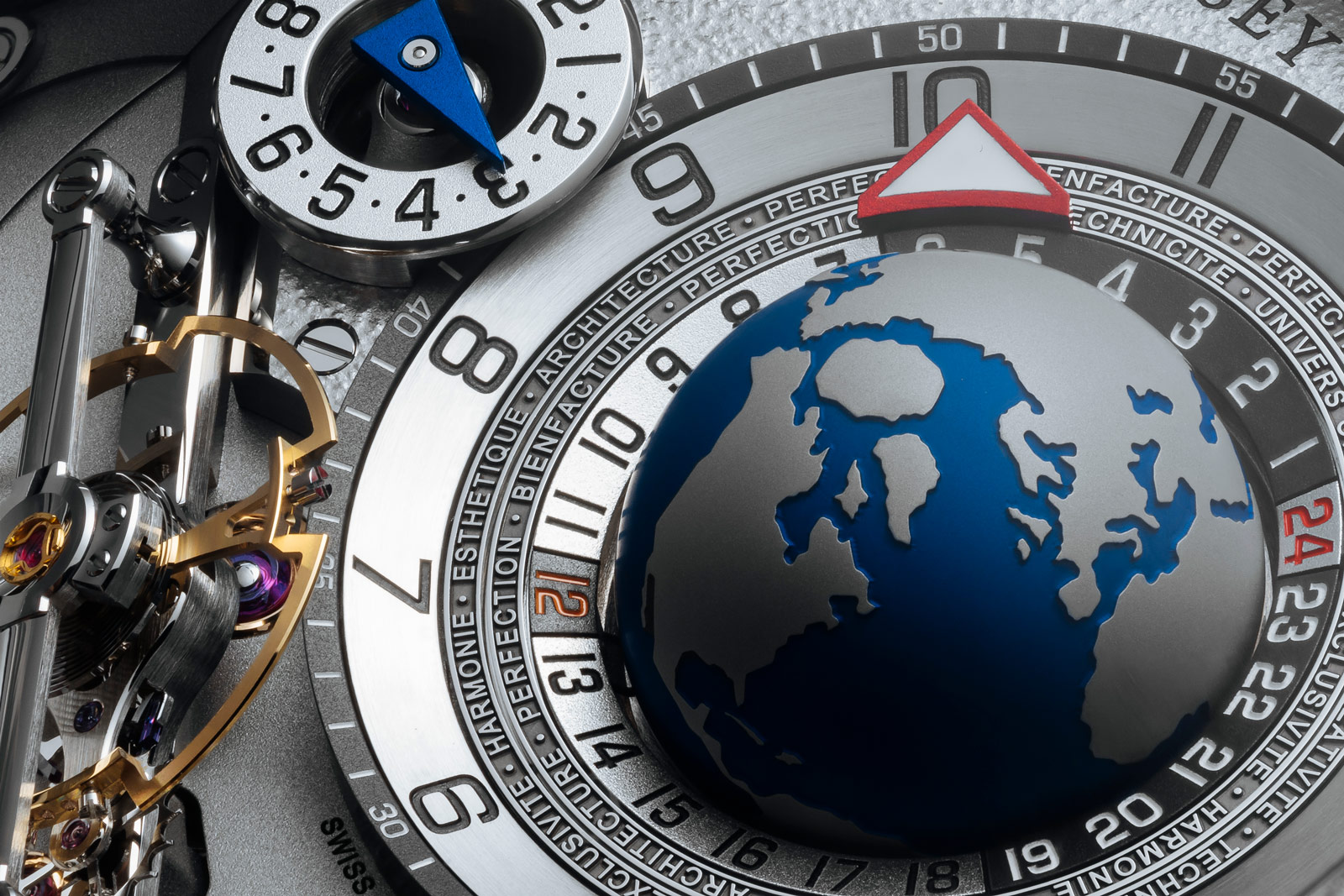 Despite its complex looks and US$400,000 price tag, the GMT Balancier Convexe is relatively simple for a Greubel Forsey. In fact, it’s the brand’s first world time watch without a tourbillon. As a result, the new GMT is as much about design as mechanics.

The GMT demonstrates how GF is implementing its sports watch styling across practically all of its line-up. The GMT has a streamlined “Convexe” case and does away with the asymmetrical bulge traditionally used to accommodate the globe. Because of its curved profile and hidden lugs, Convexe case allows the GMT to pass as a moderately sized watch despite being 46.5 mm in diameter, allowing it to wear smaller. 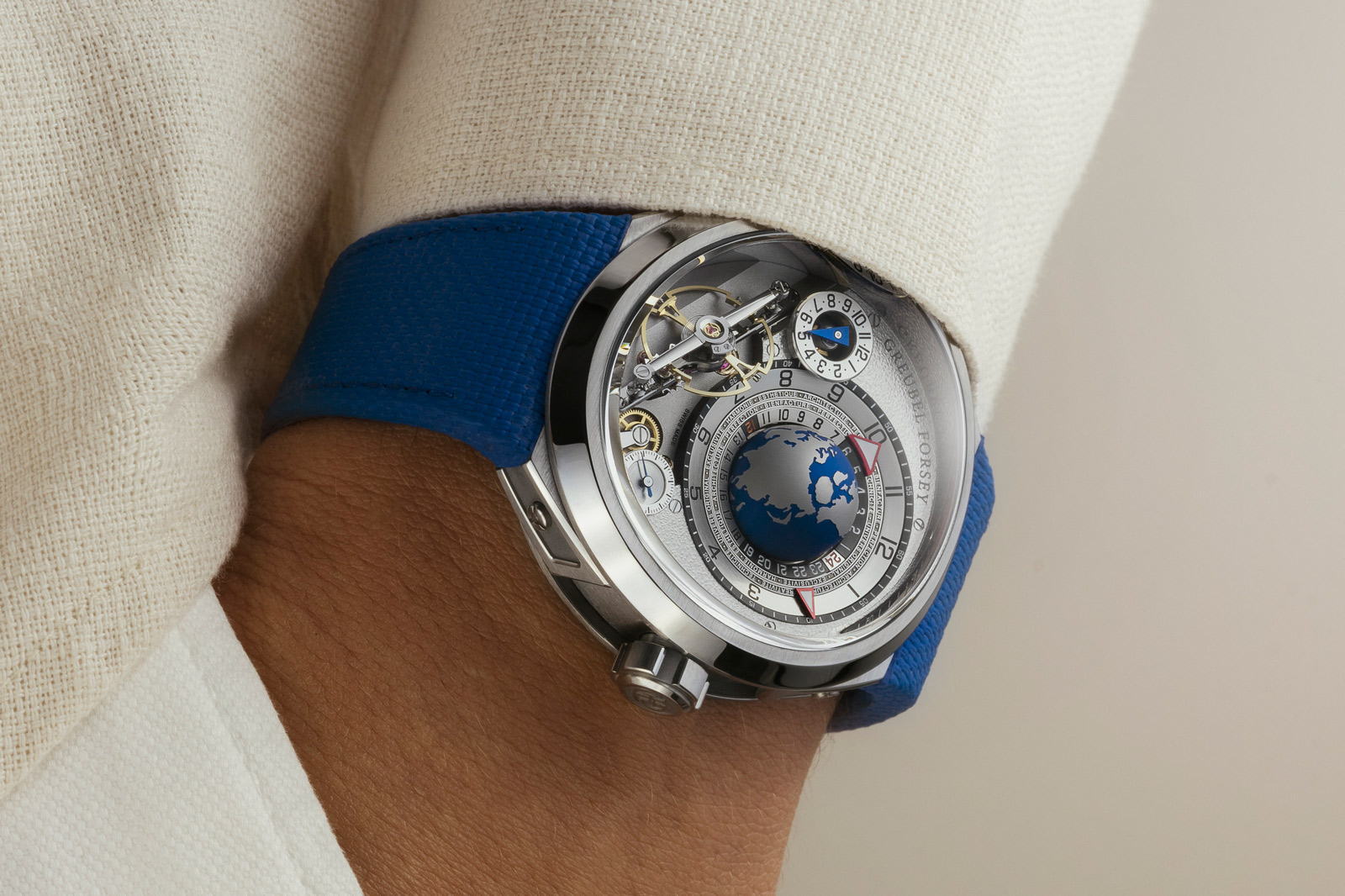 To go along with the sporty case style, the dial has been given a new look. The central feature is the world-time globe that now sits close to the centre of the dial, resulting in an unconventional look but one that’s more appealing than the asymmetrical execution in past models.

The display has been condensed to hide the irrelevant parts under the dial, revealing just enough for it to look mechanically interesting. Instead of having a sub-dial for the world time, both local and world time indicators have been consolidated into one axis, leaving more space for other elements like the full bridge for the inclined balance. This helps legibility and also means the impeccable finishing can be more easily admired since there are less elements to get in the way of the details.

While the new GMT is at heart a rearrangement of familiar elements, it is powered by a new movement that installs the world time complication on the Balancier calibre. Also notable are the “floating” hour and minute pointers that are perhaps the most logical time display for the Cottier-style world time, since the hands no longer cover the globe. 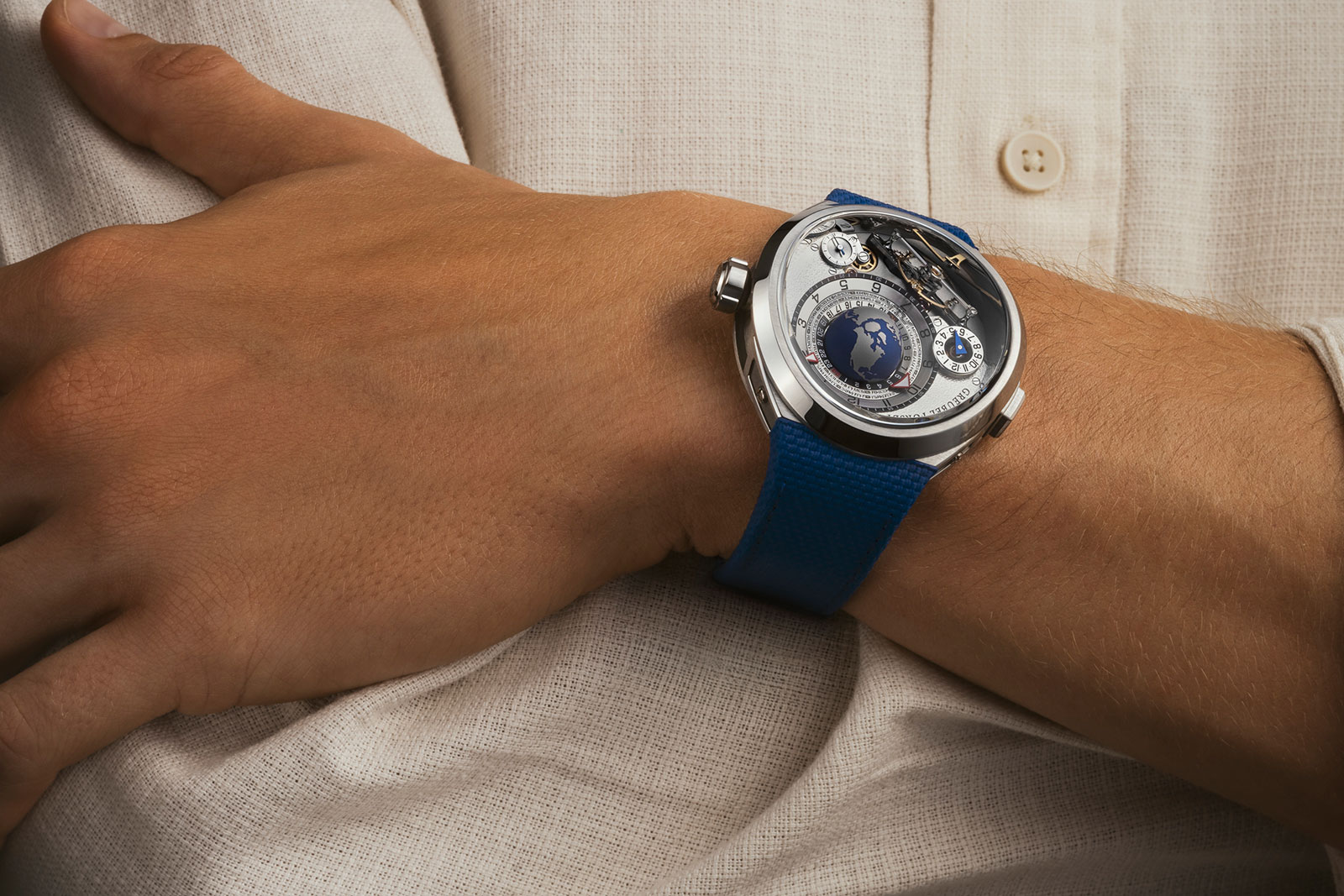 While the display on the new GMT been streamlined compared to past models, it is still an exercise to read thanks to the multiple indicators: local time, home time, and world time with an implied day-night indicator.

The local time display is most straightforward: a pair of red arrows for the hours and minutes. At the centre of the time display is the titanium globe that makes one full revolution every day, moving at the same rate as Earth. That means world time can be read by matching a location on the globe to its respective point on the 24-hour scale, but this requires a strong grasp of geography and acceptance of approximate rather than exact time. 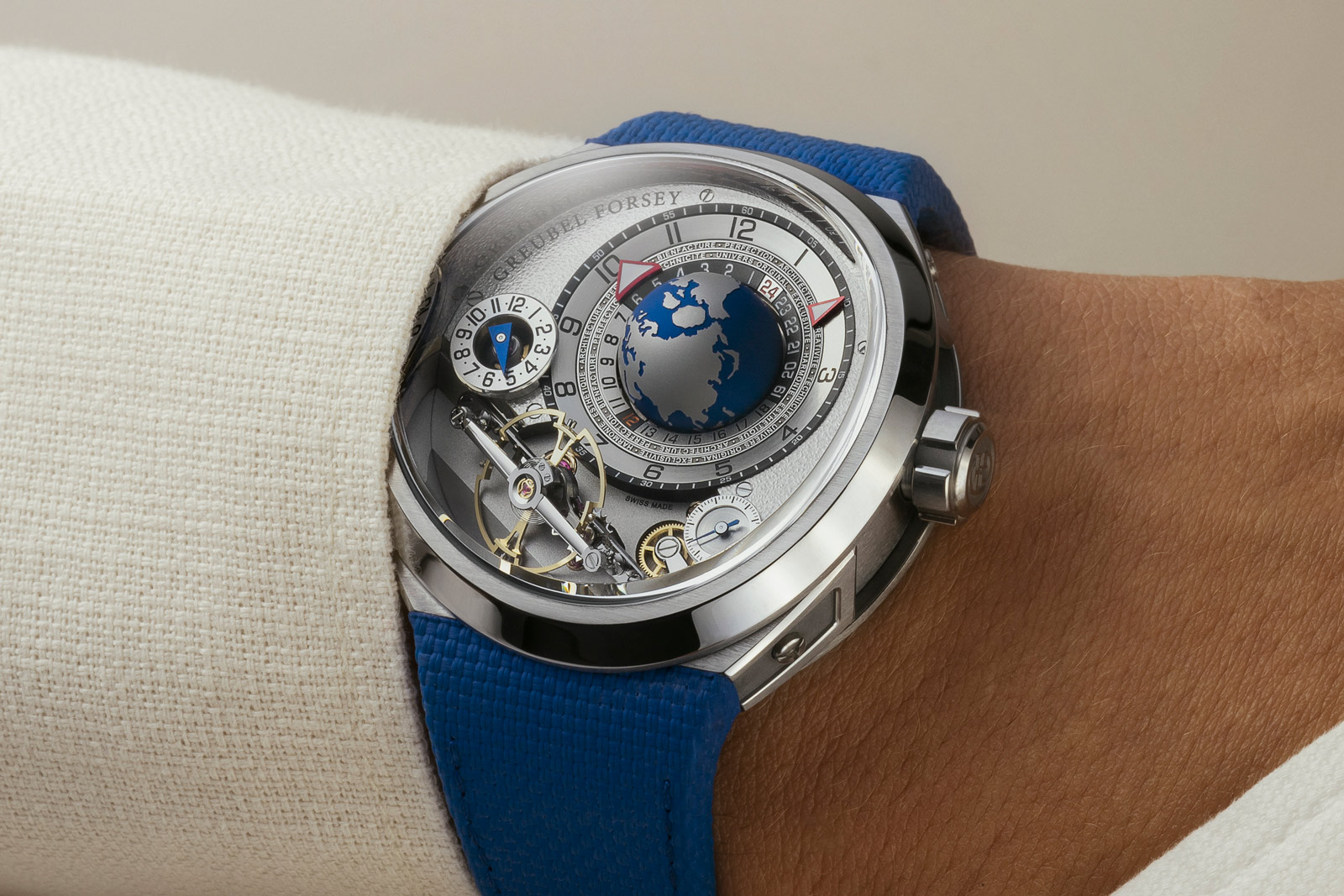 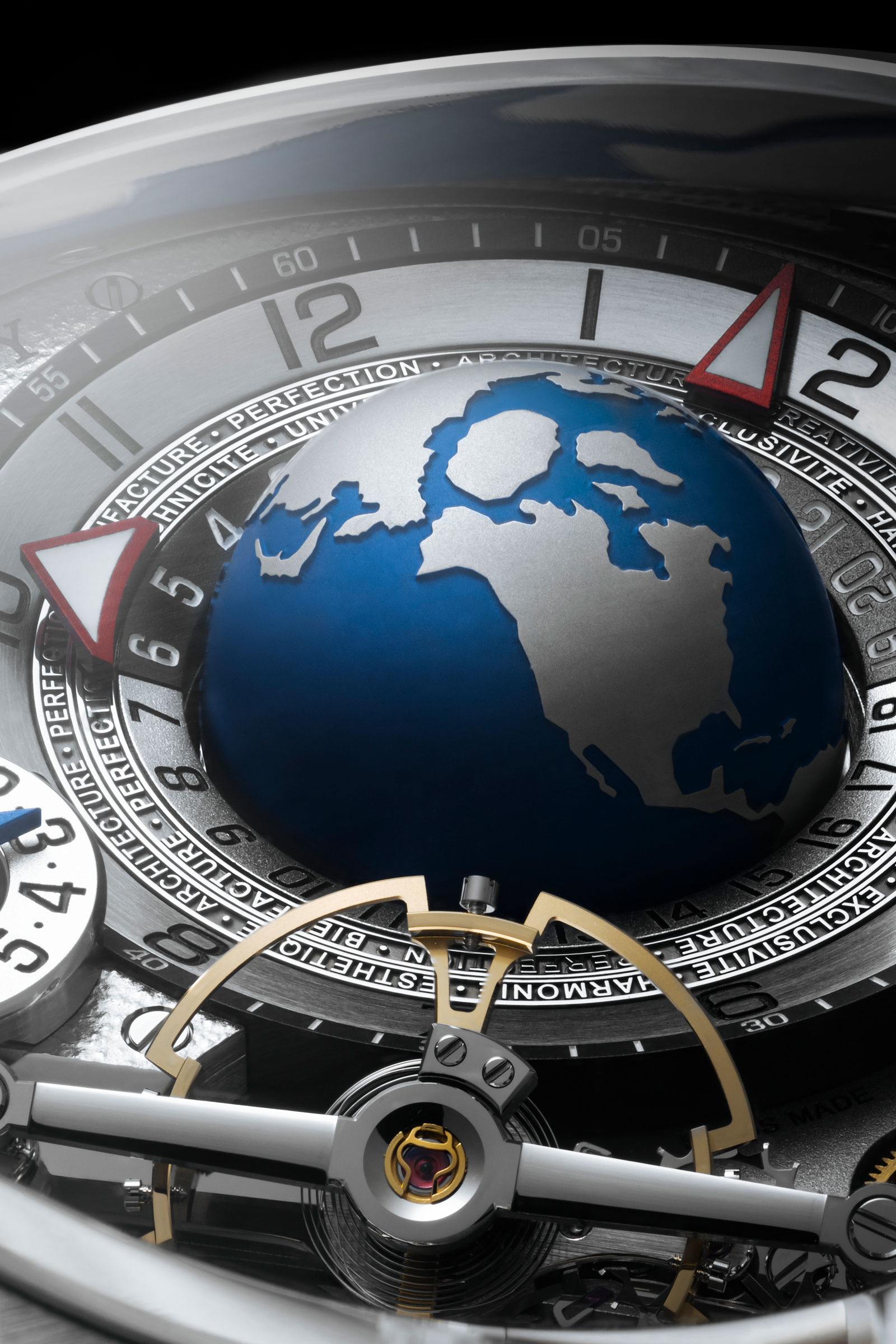 More exact is the second time zone display indicated via sub-dial at nine o’clock that moves in sync with the world time display. Though it indicates the time on 12-hour scale, day or night can be inferred from the globe and its position against the 24-hour scale. 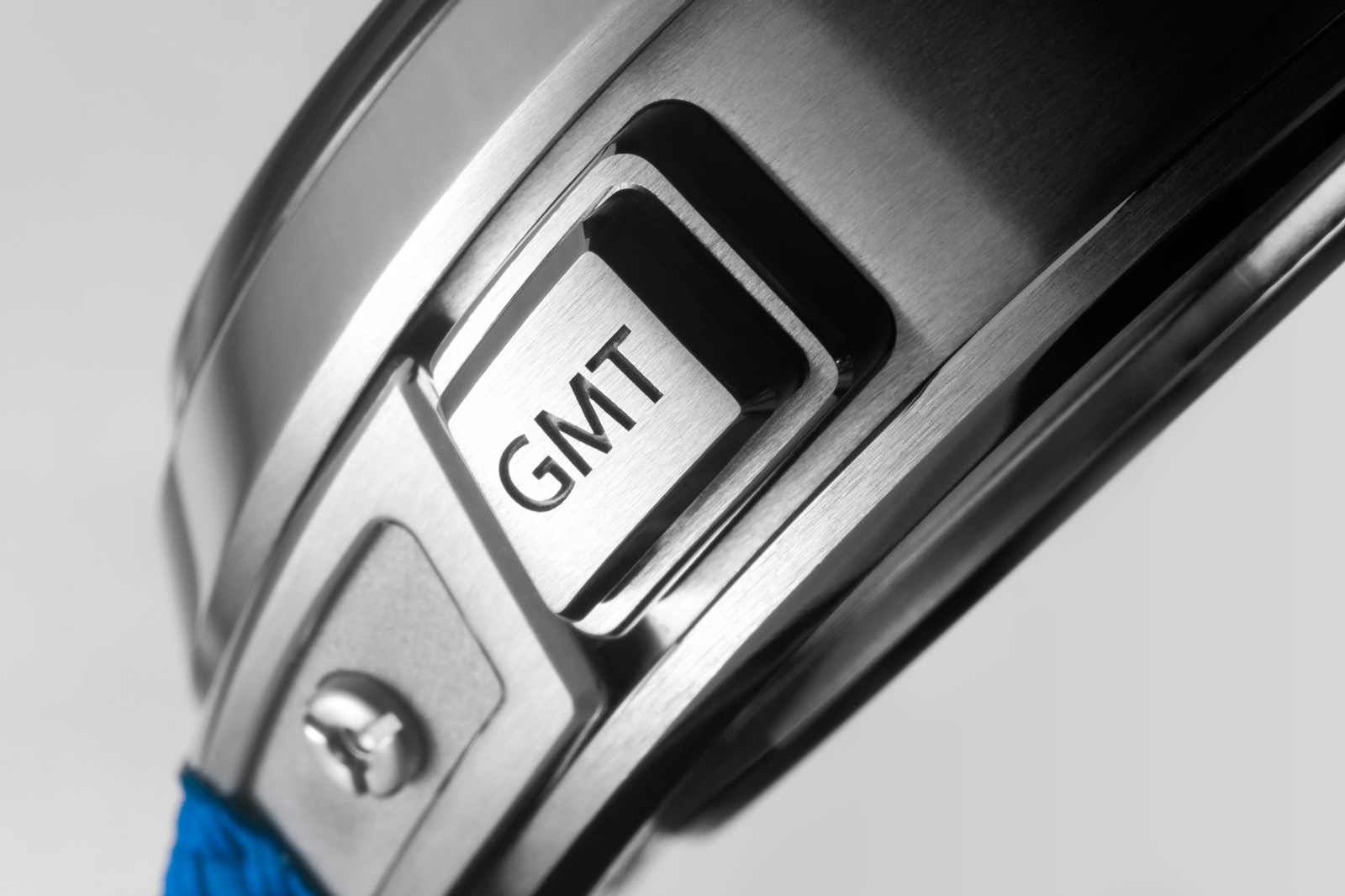 The world time on the front is intended for a quick glance, because GF has an extra-large world time display hidden on the back.

It is a sapphire disc with city names along with a larger, outer 24-hour scale that indicates time in each of the 24 primary time zones. And it also features a smaller innermost 24-hour scale for summer time.

And the final detail worth noting is the band: as is standard for the brand’s sports watches, the new GMT is offered with either a rubber strap or matching metal bracelet. The watch costs 10% more with a bracelet, which means the bracelet costs US$45,000. 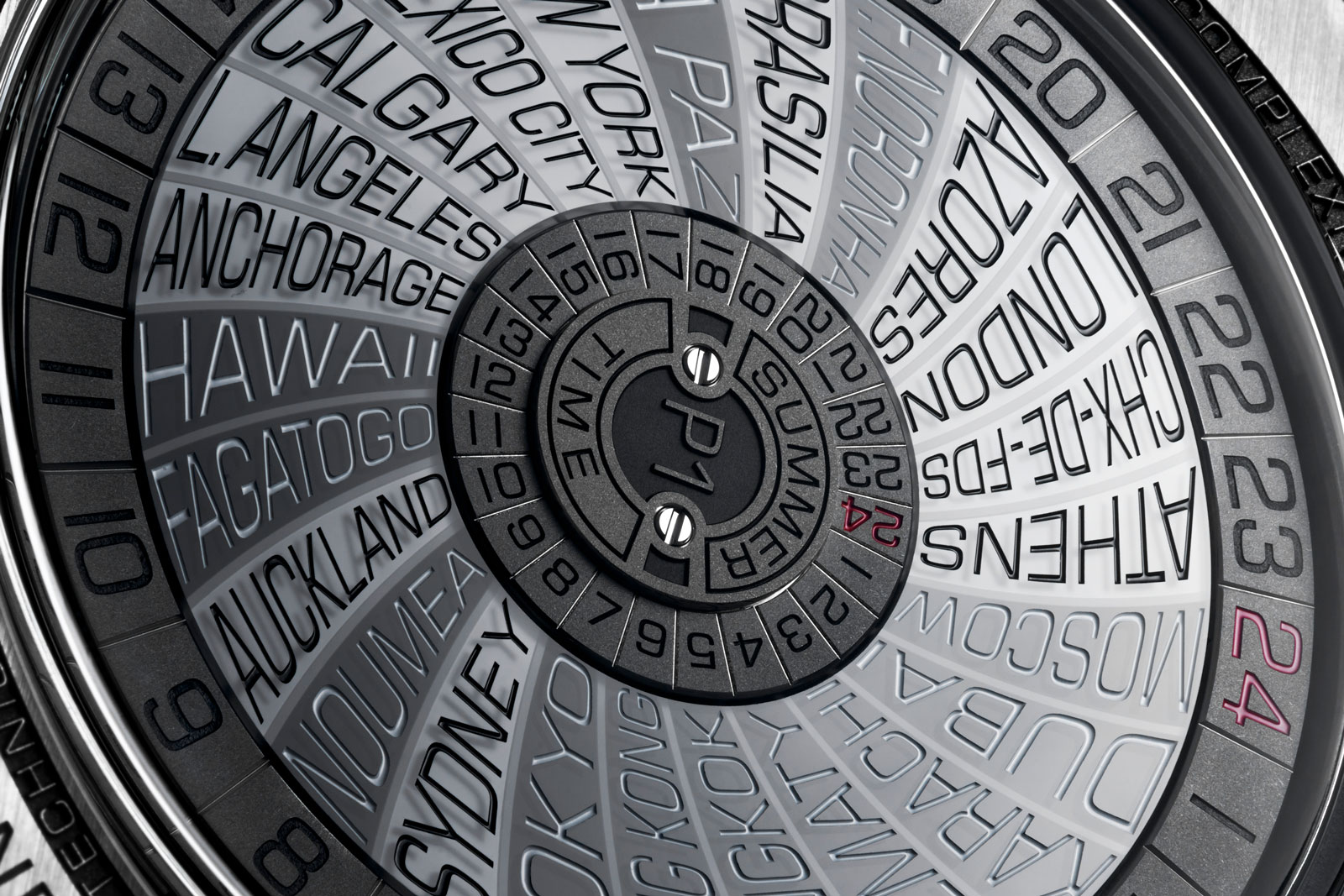 A pared-back take on the time-only sports watch. 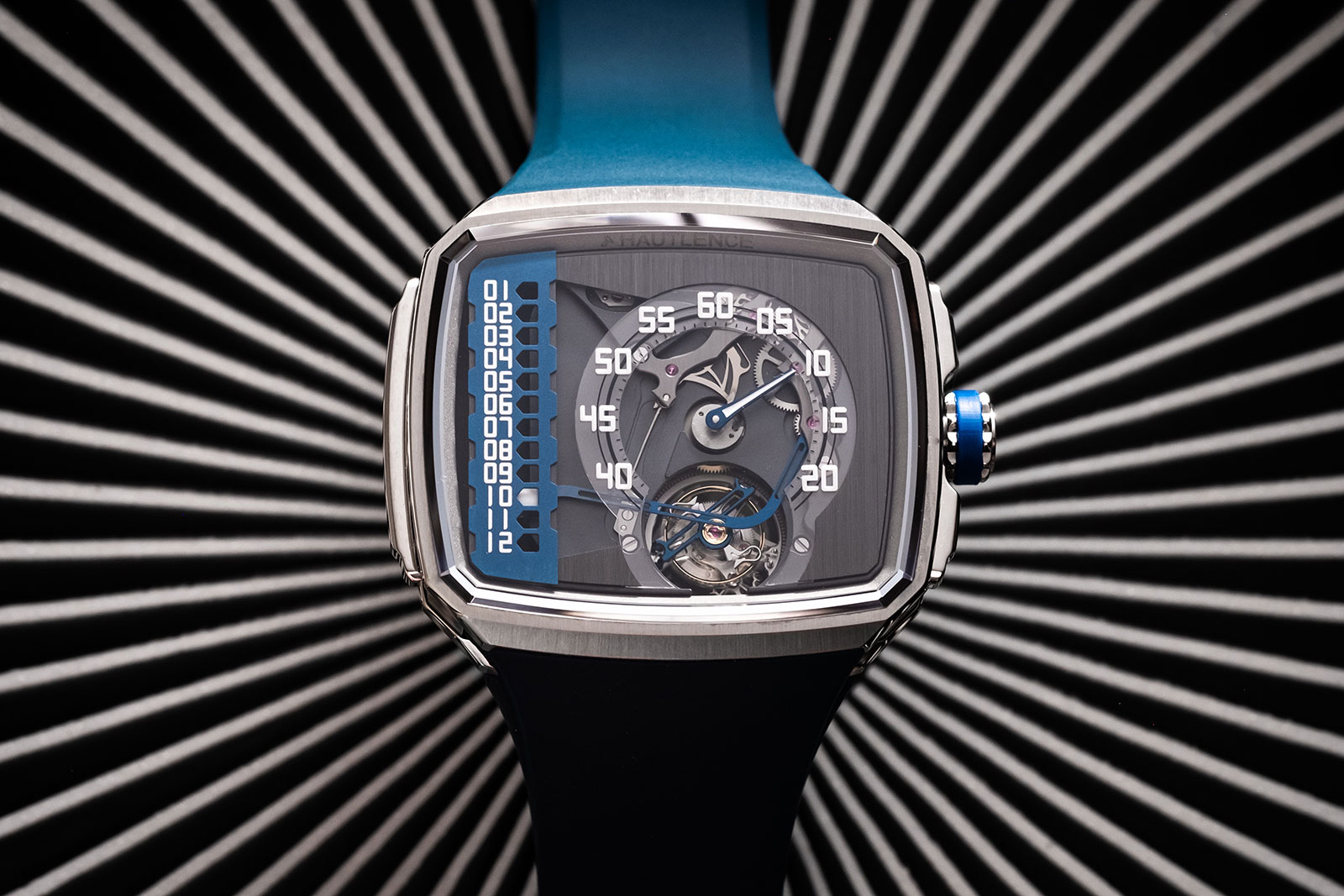 The sister company of H. Moser & Cie., Hautlence is a maker of highly contemporary watches that’s been on ice for several years as its owners completed Moser’s resurrection. Now Hautlence is making a comeback with a trio of watches led by the Linear Series 1.

Adopting the TV-shaped case that’s historically the brand’s signature – but now matched with an integrated rubber strap – the Linear Series 1 features a retrograde hours on a straight-line scale along with a flying tourbillon at six o’clock. 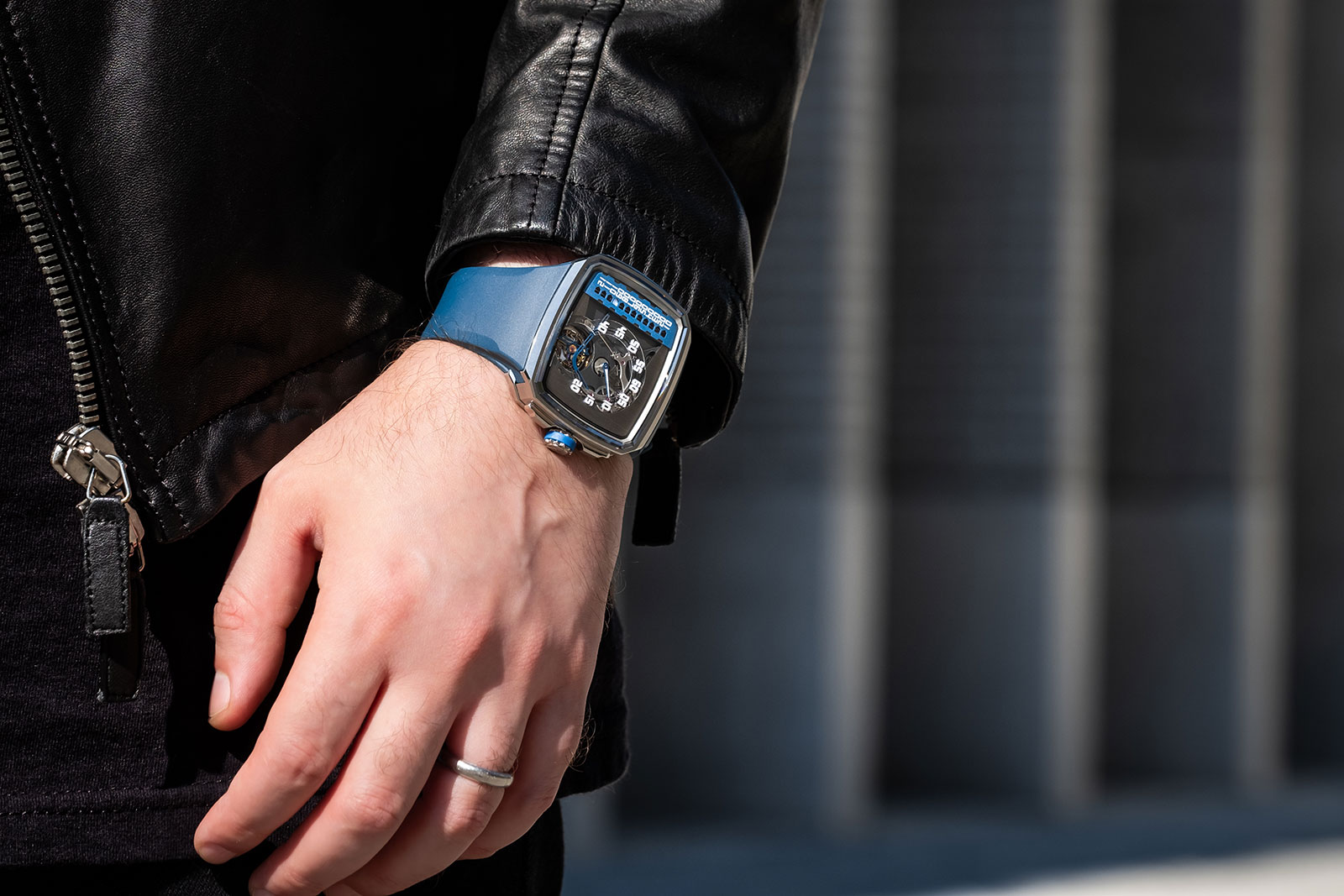 Hautlence was founded in 2004 and found success during the subsequent boom in the luxury watch industry. Its fortunes faded together with that era of good times, so it is perhaps fitting that the brand is now being revived in the midst of another boom.

The Linear Series 1 smartly returns to the TV-screen case that defined the brand since its inception. When combined with the open dial it is distinctive at a distance and recognisable as a Hautlence.

Naturally the case design has been tweaked for today’s tastes, so it gets an integrated rubber strap. The sporty stance of the new look is appealing, although the integrated strap and folding clasp means it won’t fit perfectly on all wrists. 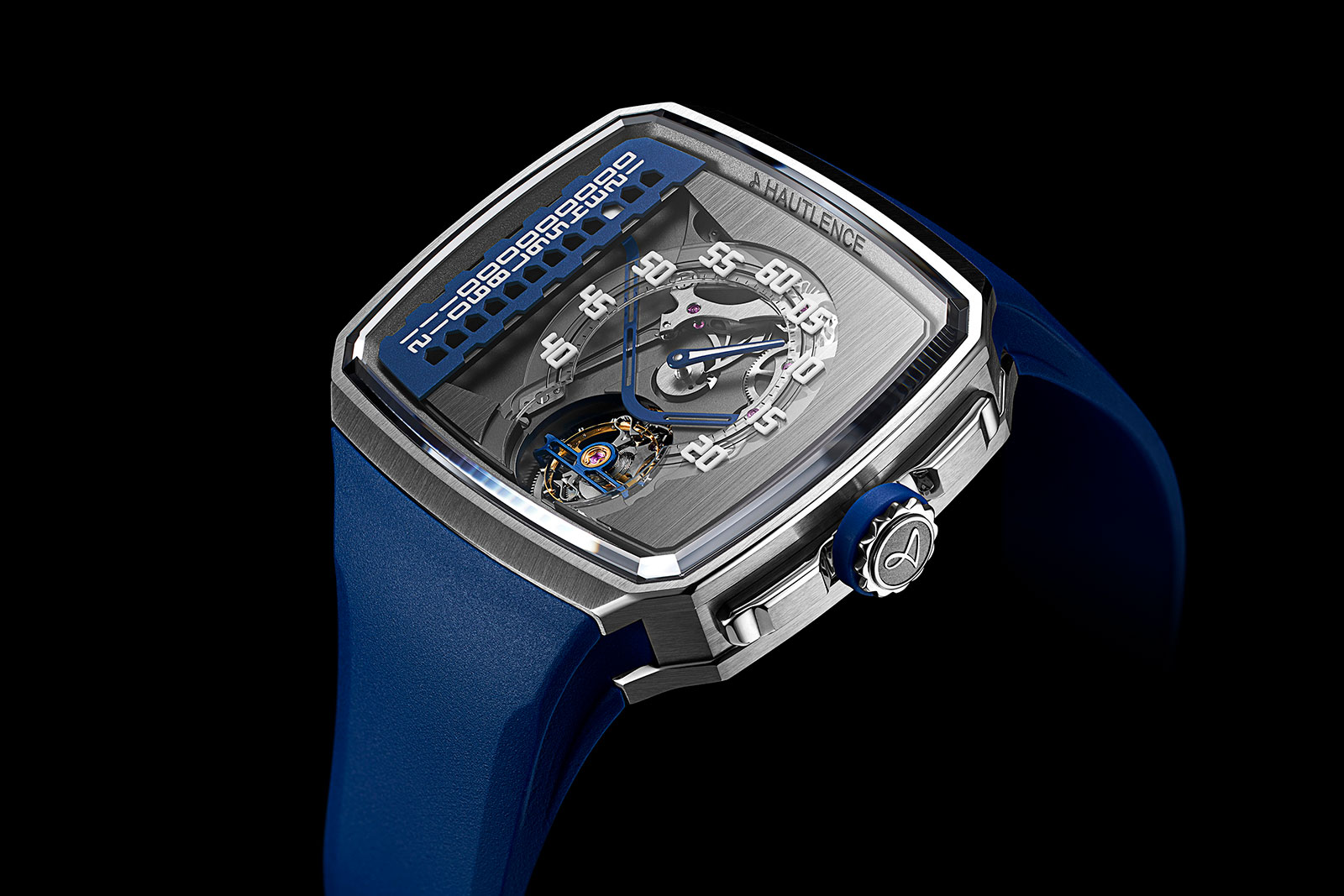 Mechanically the Linear Series 1 is the result of a Moser base movement and an Agenhor module (that was originally developed for RJ-Romain Jerome), so it has solid technical credentials.

Besides a retrograde hours, the movement also have a flying tourbillon with double hairsprings, which means its CHF59,000 retail price is reasonable. It’s one of the handful of watches with an in-house tourbillon movement and an unconventional time display at this price point. 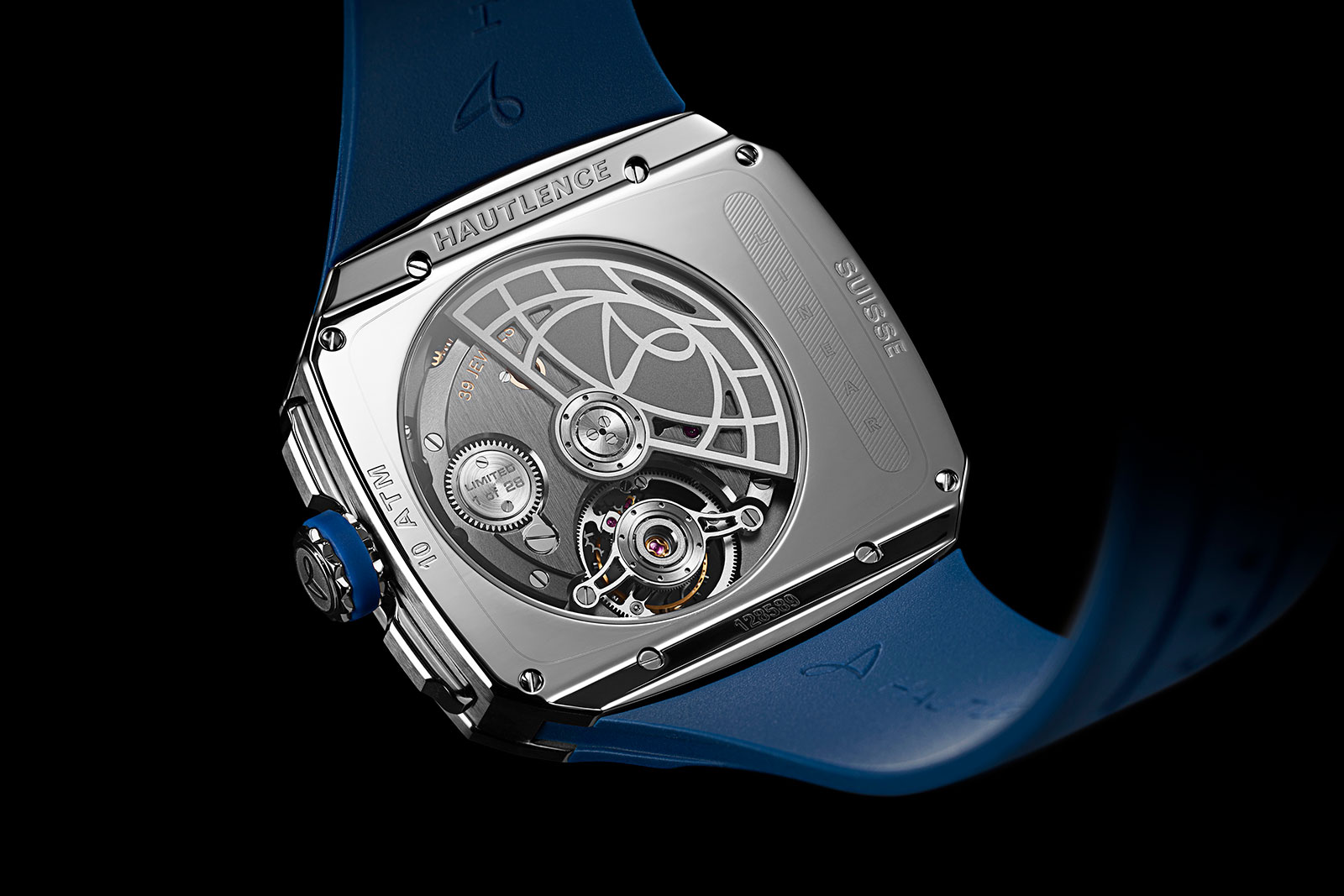 The Linear Series 1 has the TV-screen case that was synonymous with Hautlence before, but now made larger and bolder. Measuring 50.8 mm in diameter, the case is made up of tighter, sweeping lines. And it has flared sides as well as an integrated strap, giving it a sporty feel.

Other visual elements from the original Hautlence watches have been retained, including the exposed levers of the retrograde display as well as a the double-digit Arabic numerals scales for the time. 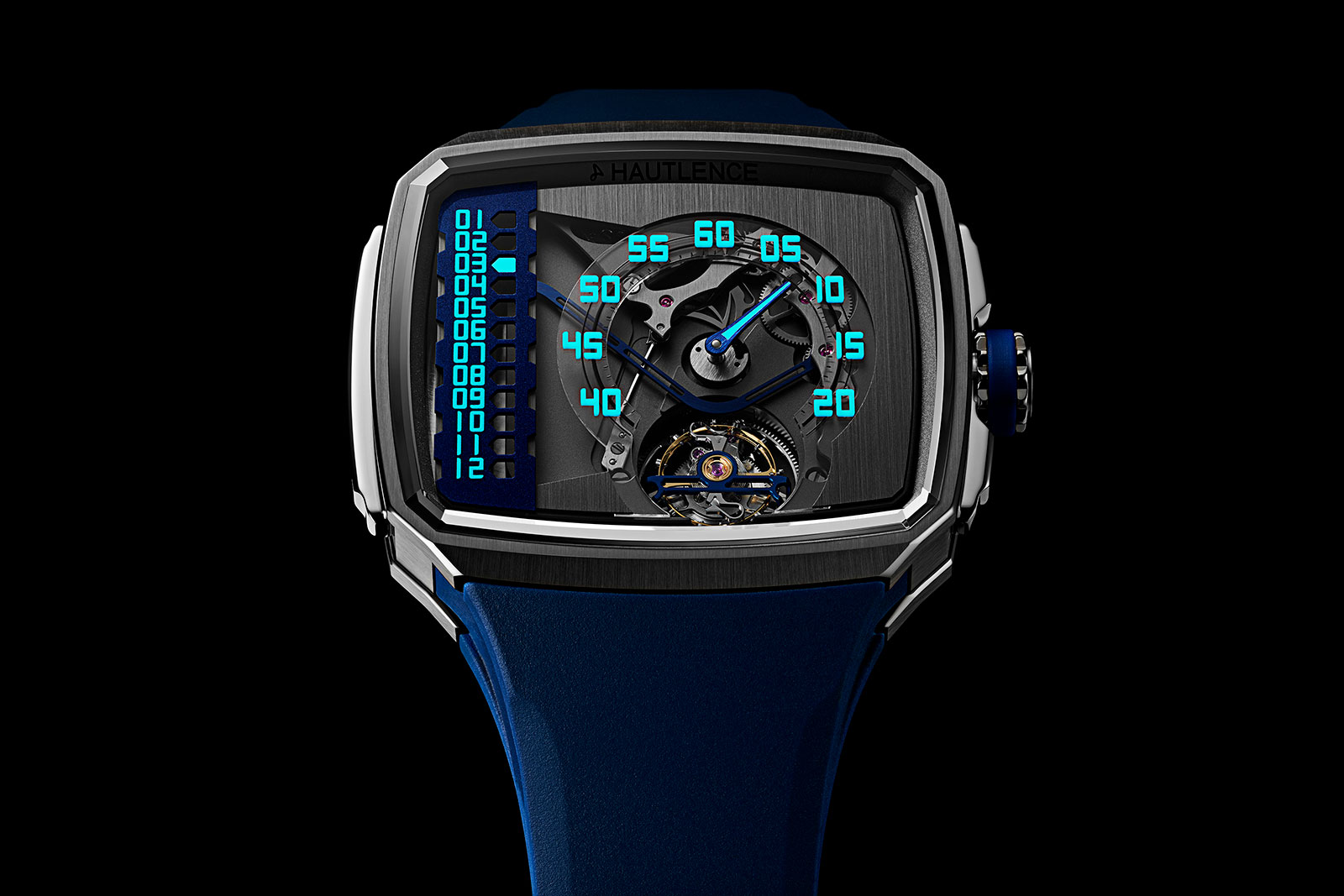 Unsurprisingly, the mechanics within borrow from its sister company Moser. The automatic D50 movement is essentially the HMC 804 made by Moser and found in its Endeavour Tourbillon amongst others. Here it’s been given a dark grey finish and a rotor bearing the Hautlence emblem.

As a result, the tourbillon at six is recognisably identical to the one found in Moser’s tourbillon, but here fitted with a straight, blued bridge that echoes the case design. It has the same double stud carriers for the hairsprings since the balance wheel is connected to double hairsprings. 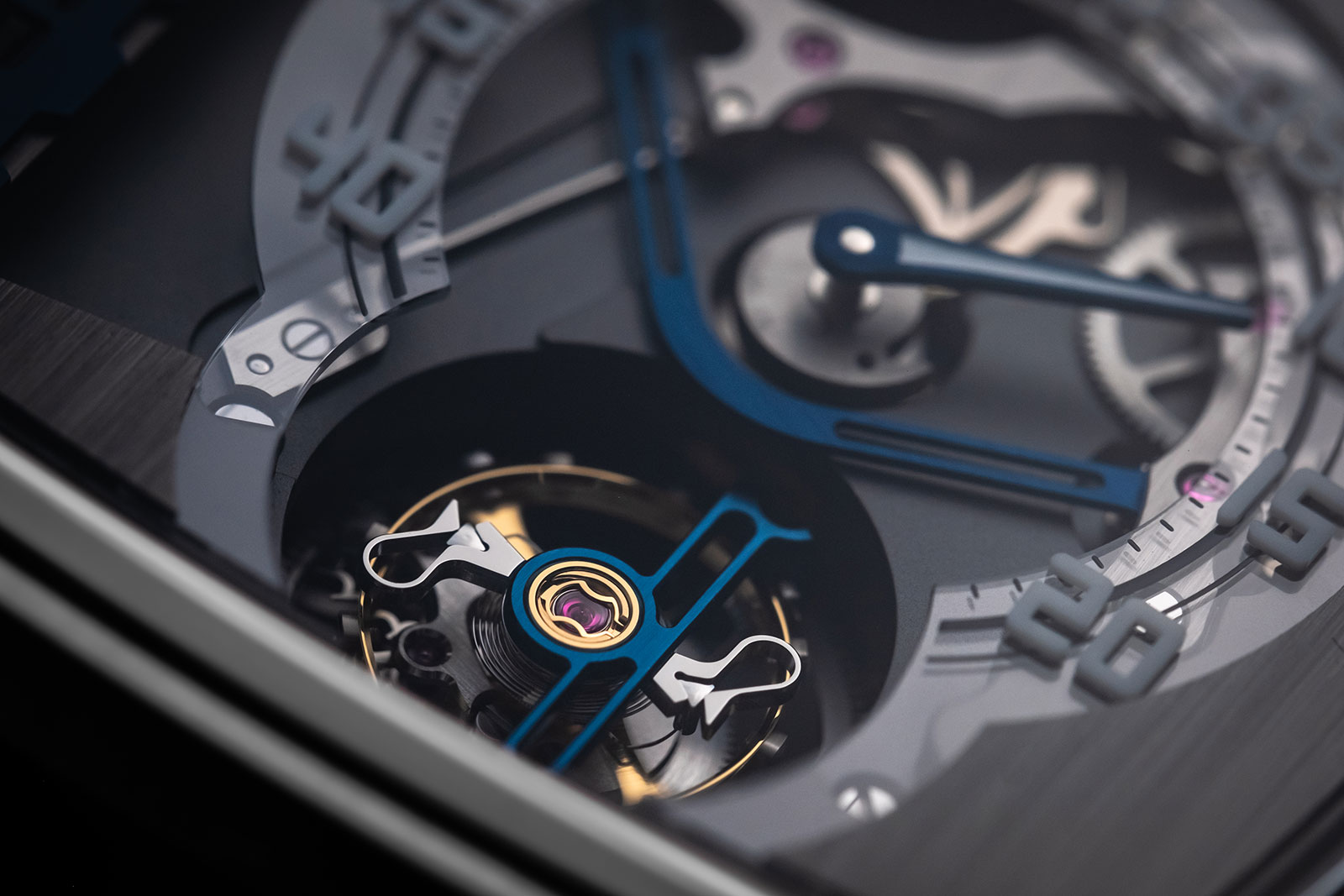 The Moser base calibre is paired with a display module made by Agenhor that has a conventional minute display matched with a retrograde hours driven by a long, V-shaped arm in blued steel visible on the dial.

The construction of the retrograde hours is a nod to the first model Hautlence introduced, the HL01, which had a retrograde minutes driven by a similar long lever. Despite its similarity to the HL01 movement, the Agenhor module is actually recycled – the module was originally developed for now-defunct RJ-Romain Jerome. 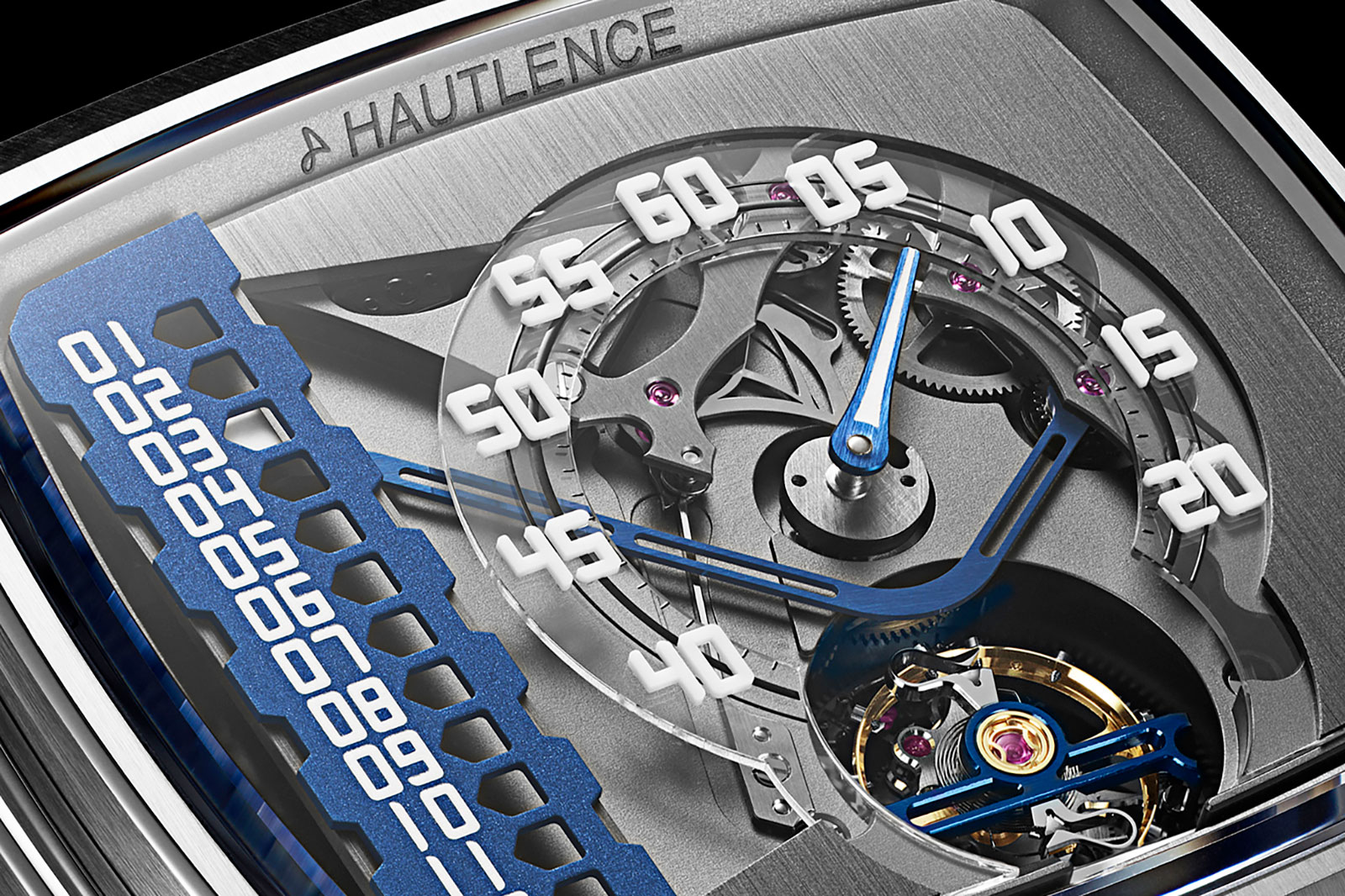