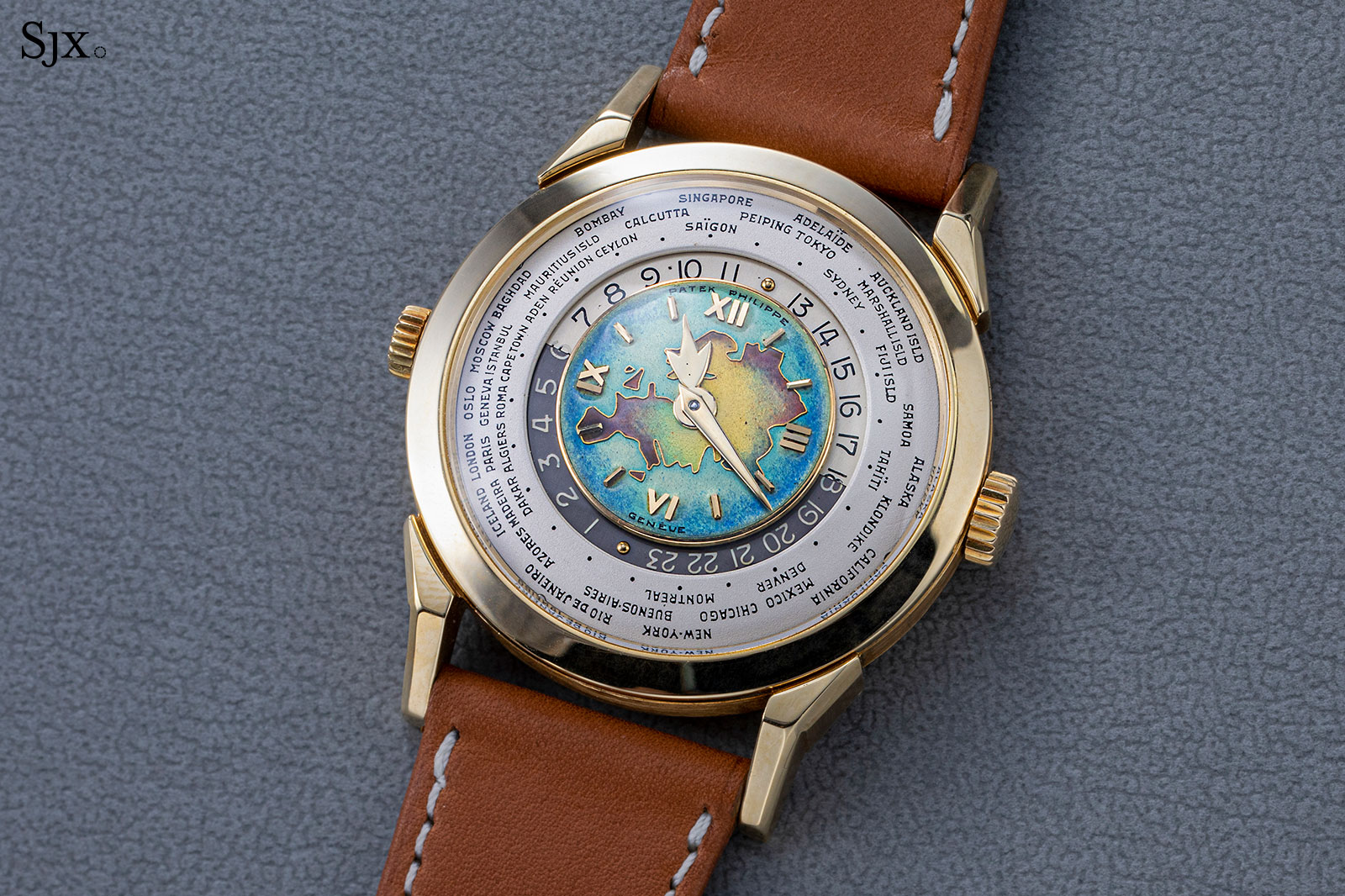 The upcoming spring auction season is bringing with it a surprising number of vintage Patek Philippe world time wristwatches. Christie’s will be offering three of them during its evening sale on May 22, including the famed and unique ref. 1415 HU in platinum that once held the record of most expensive watch in the world when it last sold publicly in 2002 and achieved CHF6.6 million including fees.

Phillips, on the other hand, will be offering the Patek Philippe ref. 2523 “Eurasia” publicly for the very first time. Long owned by an Italian collector until it was acquired by the present owner in the mid 1990s, this ref. 2523 is one of just three known with a cloisonné dial bearing the “Eurasia” map – and it is in strikingly fine condition. I put it on my wrist during the preview exhibition, and the watch is gorgeous, crisp, and arguably every dollar of the ten or more million it’ll sell for. 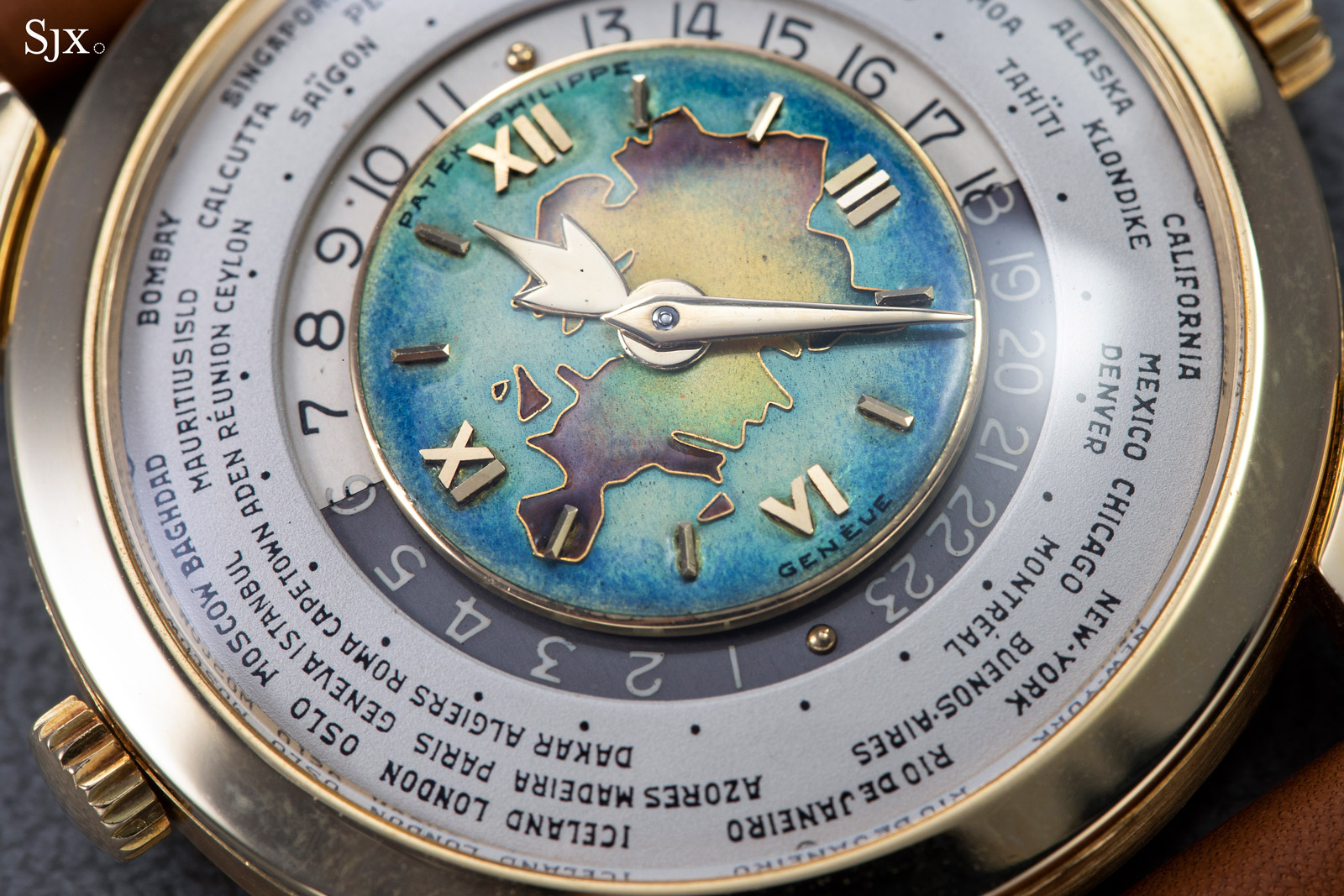 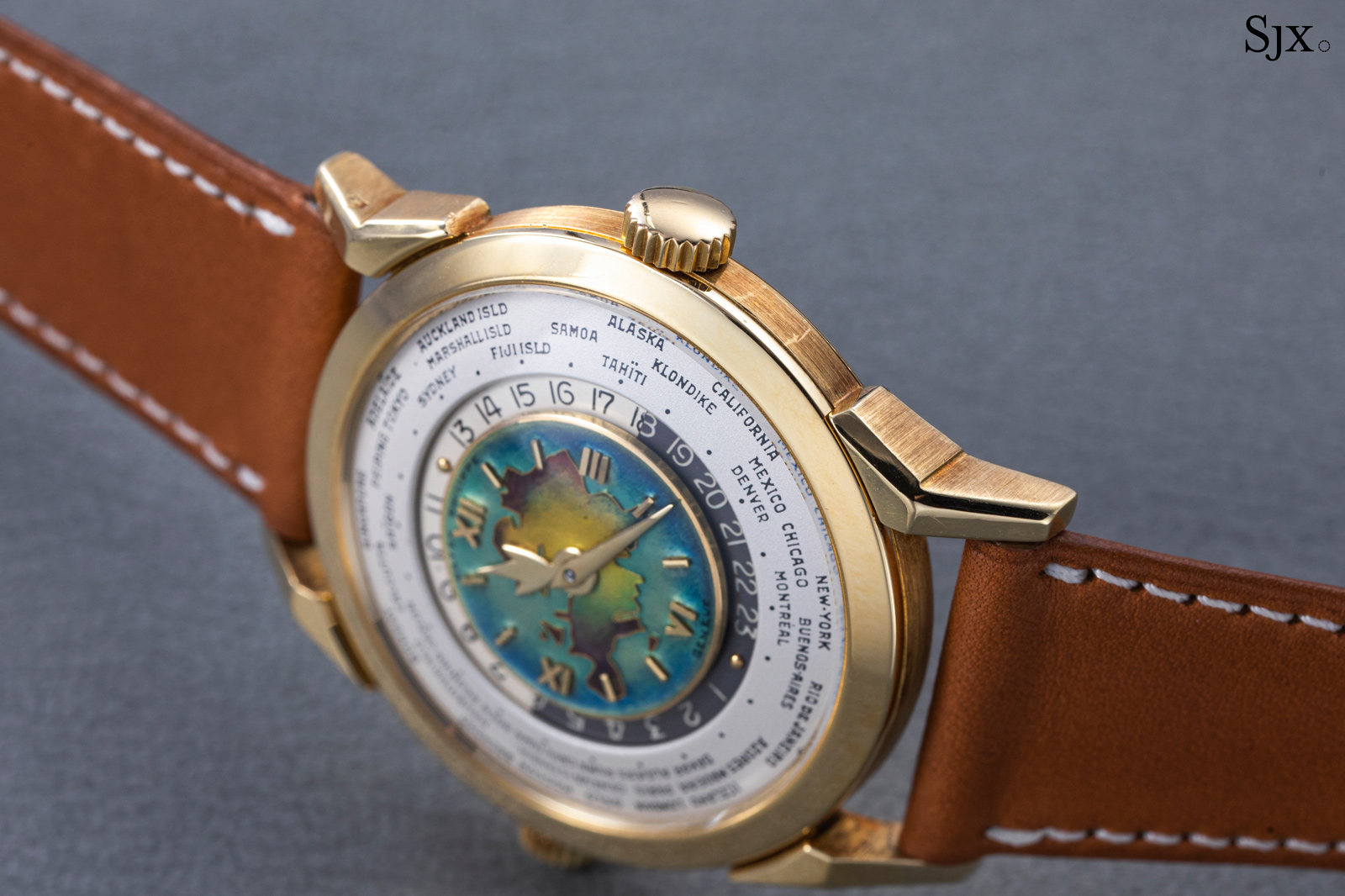 Despite not being amongst the most complicated watches Patek Philippe made in the 20th century, its world-time wristwatches (and also pocket watches) are amongst the brand’s most coveted and valuable timepieces.

Well before the platinum ref. 1415 HU set a record in 2002, examples of the ref. 2523 with cloisonné dial were regularly selling for well over US$1 million at auction in the 1990s – and are the inspiration for the today’s world-time models, including the recent ref. 5231J. The fact that the world-time was a favourite of Osvaldo Patrizzi, the founder of Antiquorum and then the most important person in watch auctions, doubtlessly contributed to the strong prices. 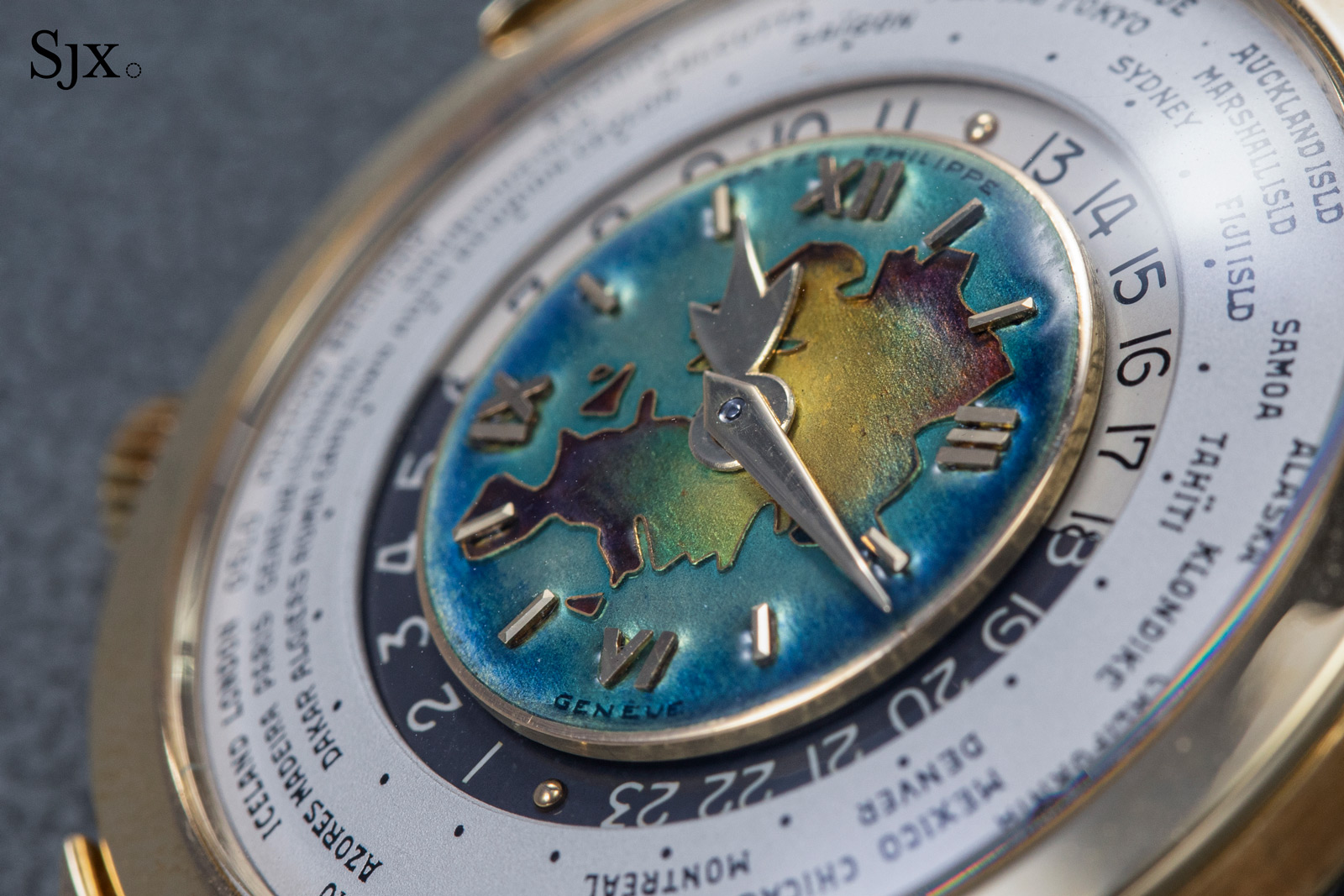 The intrinsic appeal of the world-time watches is manifold. To start with, they are visually distinctive and beautiful, with the enamelled versions being exceptionally pretty in a manner that few complicated watches can achieve. In fact, the world times are the only complicated Patek Philippe wristwatches to feature cloisonné enamel dials. 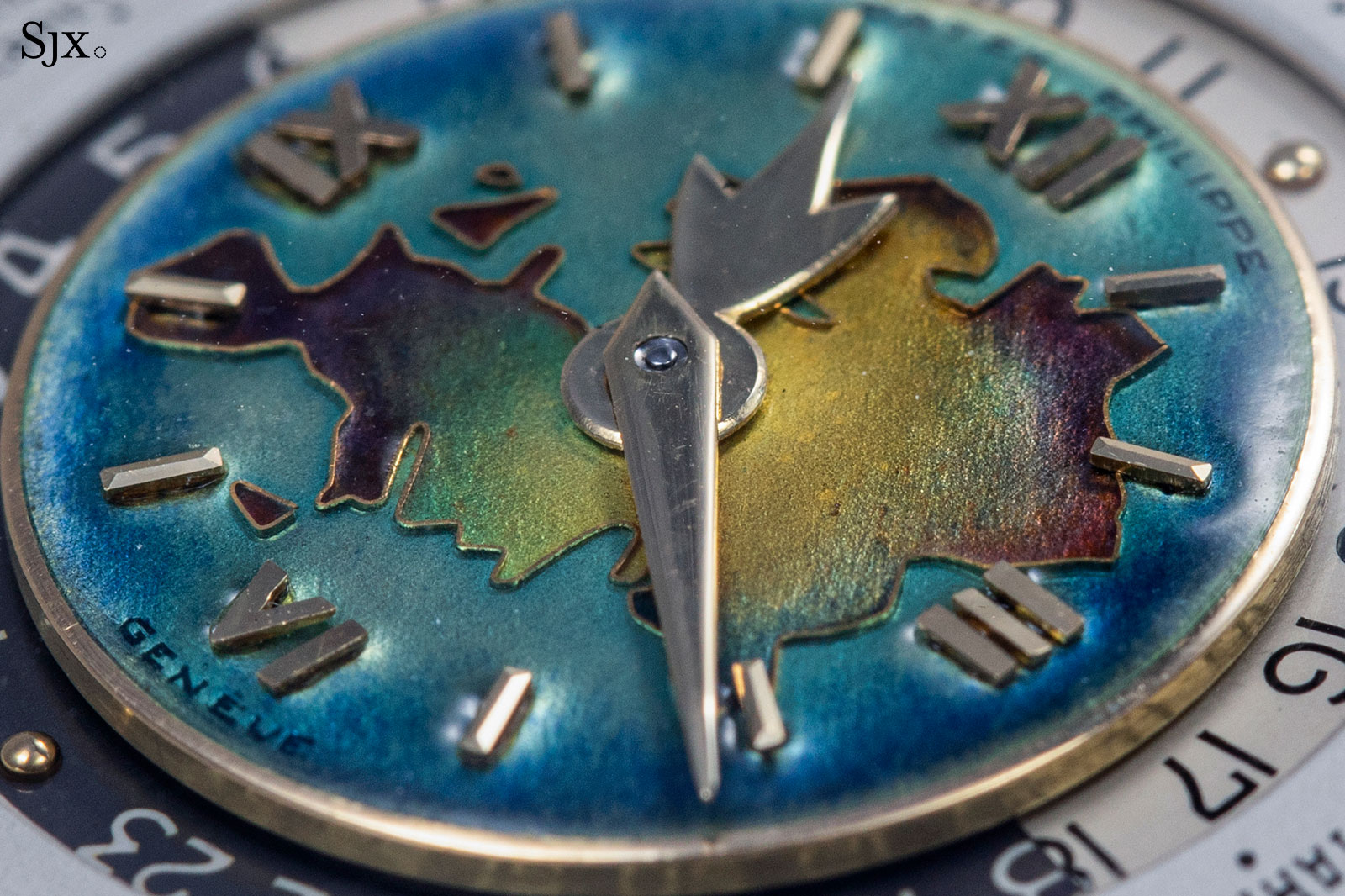 More broadly, the world-time watches also evoke a bygone era when intercontinental travel was actually an adventure undertaken by boat, rail, or propeller planes. In fact, the first commercial passenger services using jet airliners only started in 1952 with the ill-dated de Havilland Comet.

Perhaps the watch that symbolises the dawn of the jet age is the Rolex GMT-Master – originally developed for the pilots of Pan Am – which was introduced in 1955. In contrast, this example of the ref. 2523 – produced in 1953 and sold a year later – was very much a part of an era that was quickly coming to an end. 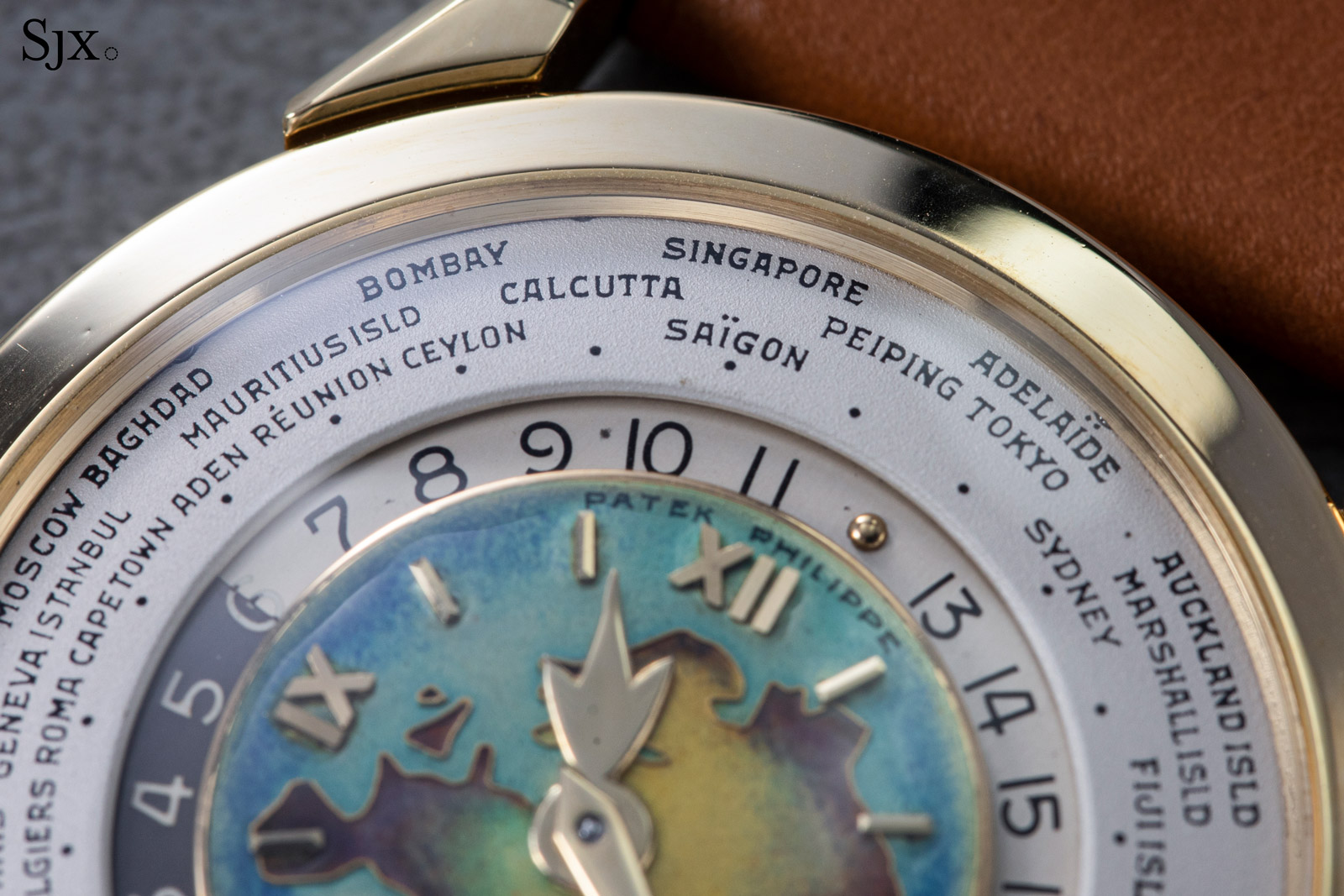 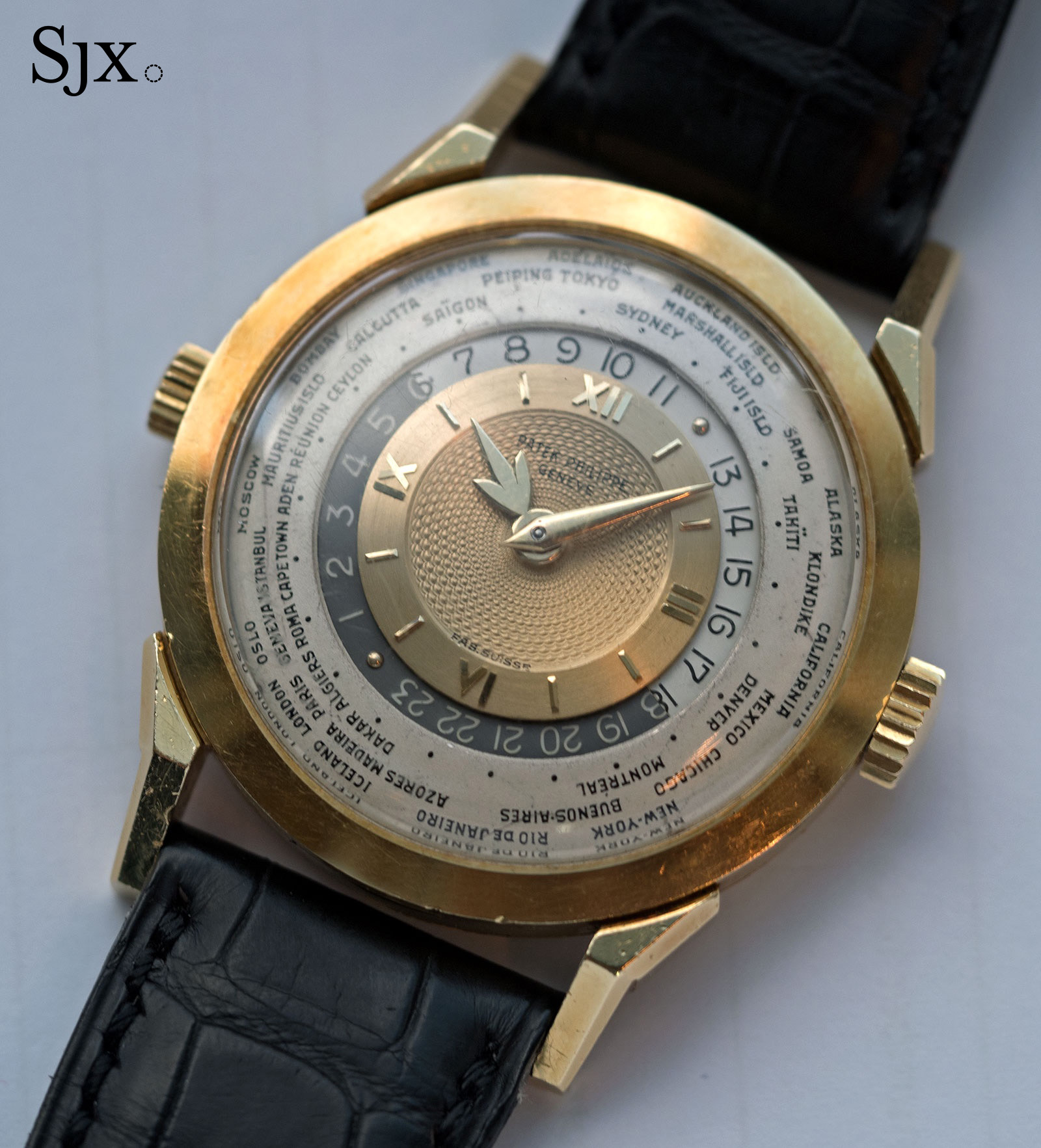 Another variant of the ref. 2523, this one with a guilloche dial

One reason for the scarcity of the world-time watches is simple – they just did not sell well, according to Phillips. And another is the fact that the world-time complication was made by Louis Cottier (1894-1966), the Geneva engineer whose best known invention is the world time, which was also supplied to Rolex, Vacheron Constantin, and Agassiz, amongst others.

He invented several complications for Patek Philippe, including the linear-hour display of the experimental ref. 3414 (that has been reproduced in the modern day by Urwerk). All of the world time watches were powered by a 12-ligne movement – the cal. 12-400 in the ref. 2523 and the cal. 12-120 in the ref. 1415 – with Cottier adding the world time module onto the base plate. According to Phillips, Cottier also produced the hands of the world-time models, and assembled the finished watches. The gold hands are evidently made by hand, by Cottier himself no less 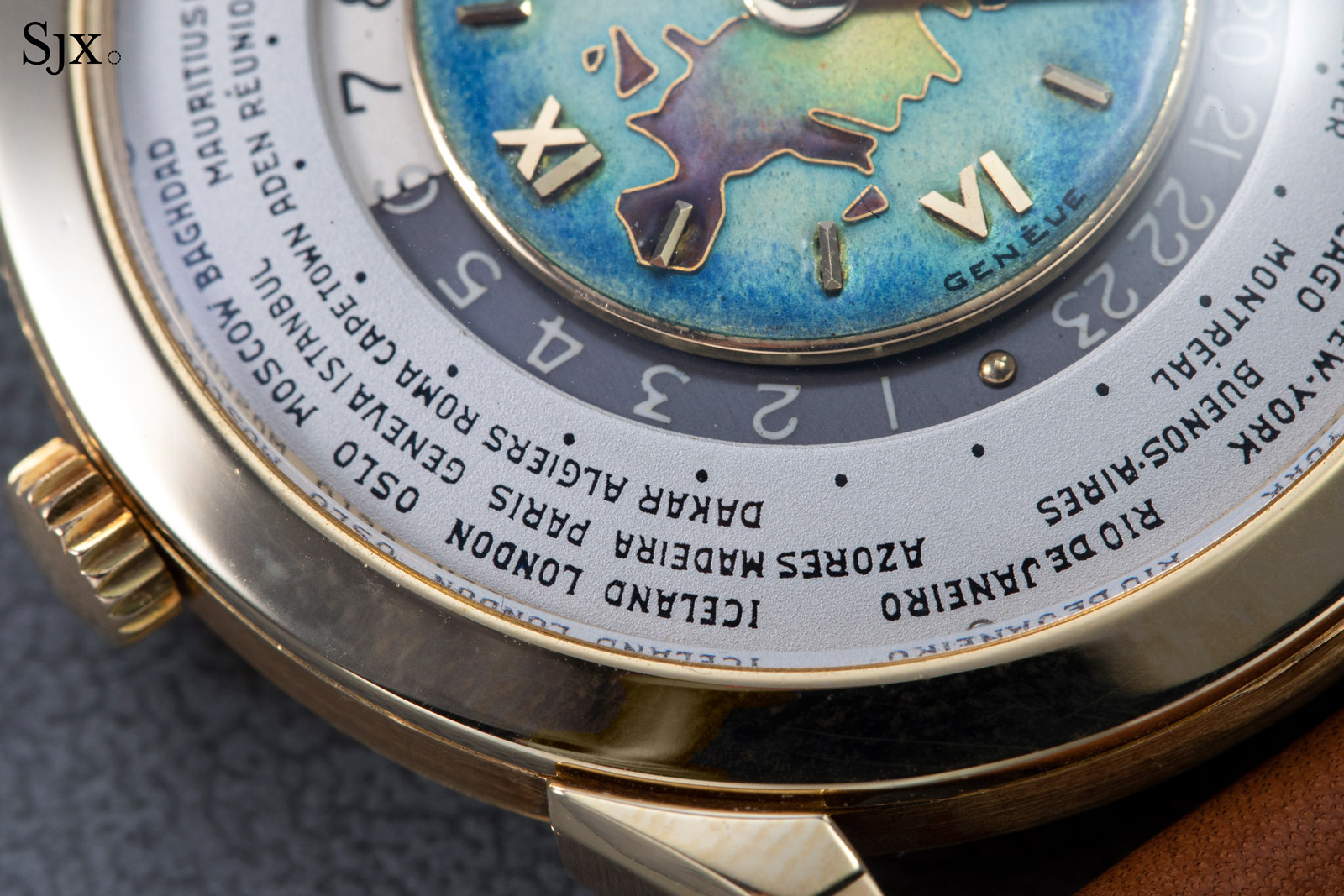 Officially described as “Europe” by Patek Philippe, the map on this ref. 2523 has come to be known as Eurasia, despite not having very much of Asia on it. Perhaps an expediency in increasing its appeal with Asian clients, “Eurasia” is relatively uncommon amongst the cloisonné maps found on the ref. 2523, with just three known. The most numerous version of the cloisonné-map ref. 2523 is North America, with six known. 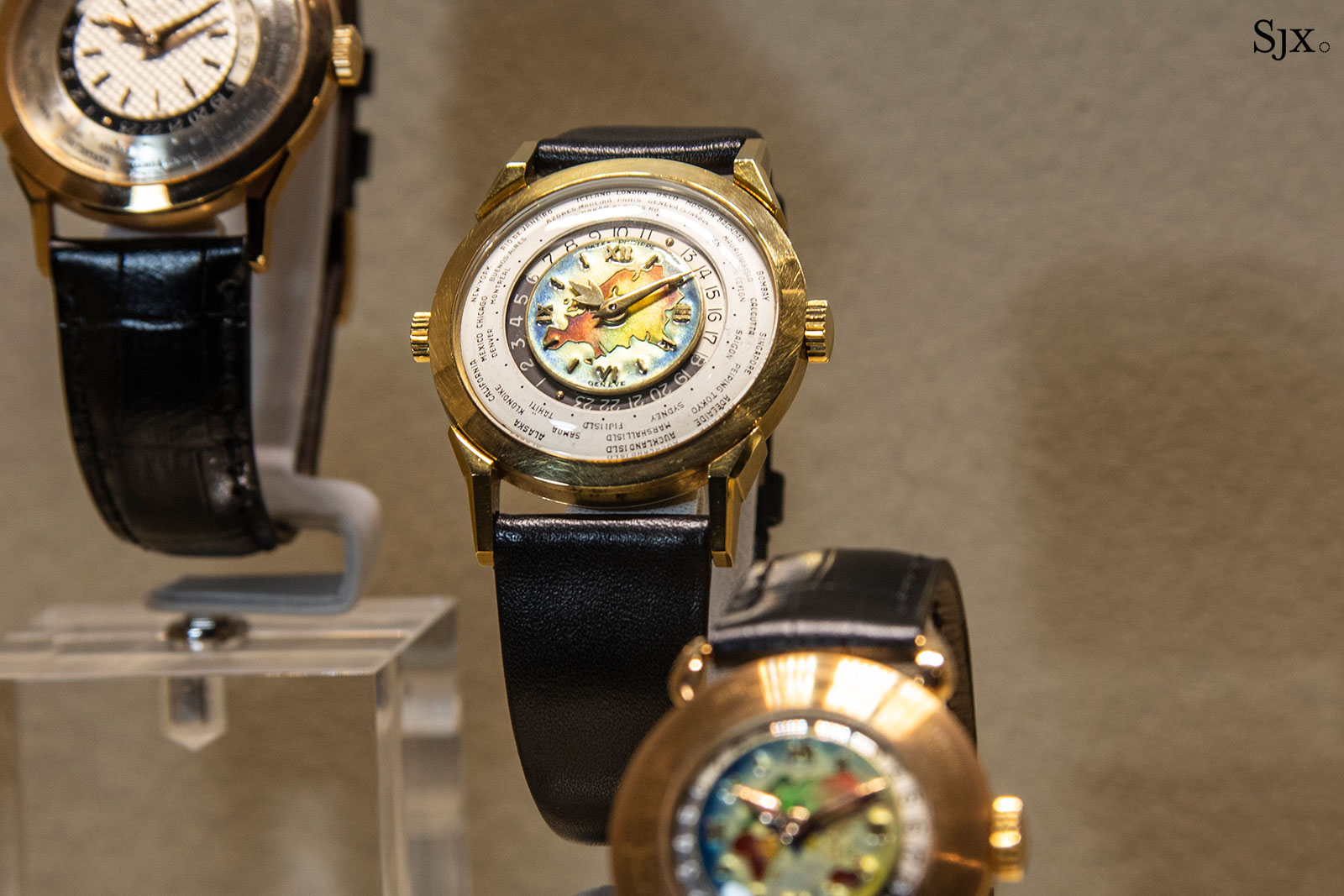 Another of the known ref. 2523 “Eurasia” is in the Patek Philippe Museum

This example of the ref. 2523 is both original and well preserved. The case retains much of its original shape and lines, a quality that is especially visible on the “wing” lugs, which are stepped on the side and facetted along the edge. At the same time, the hallmarks remain deeply embossed. 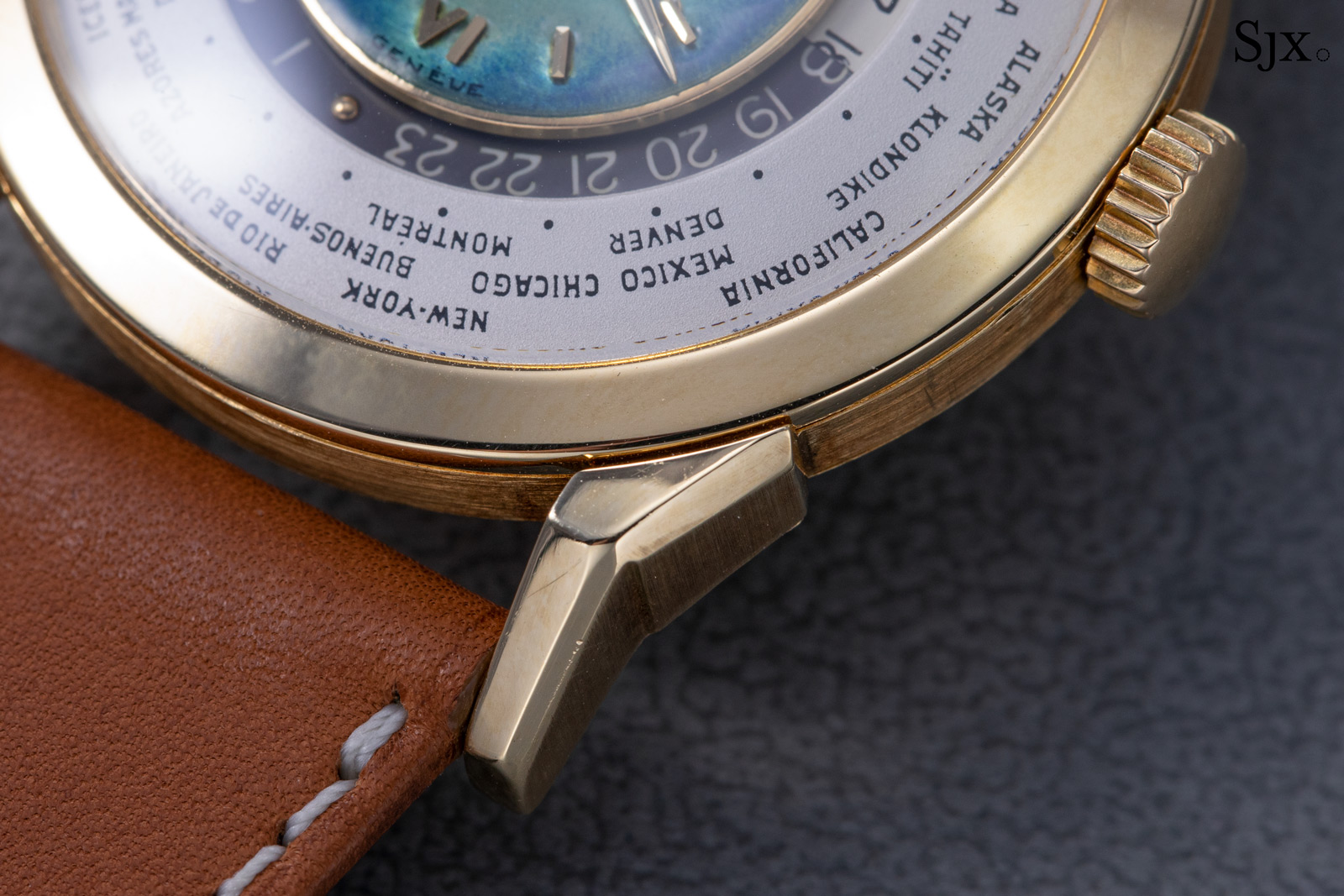 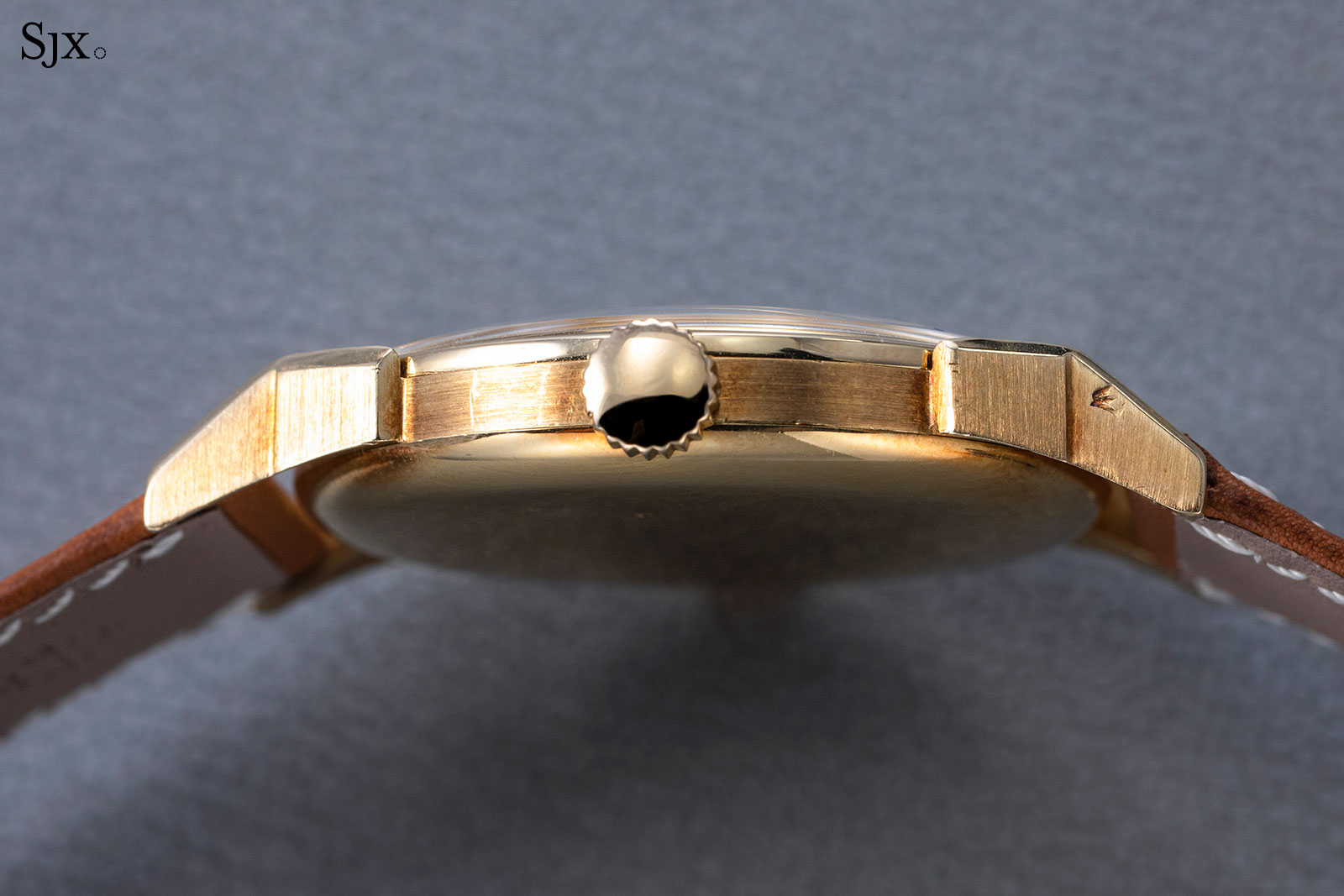 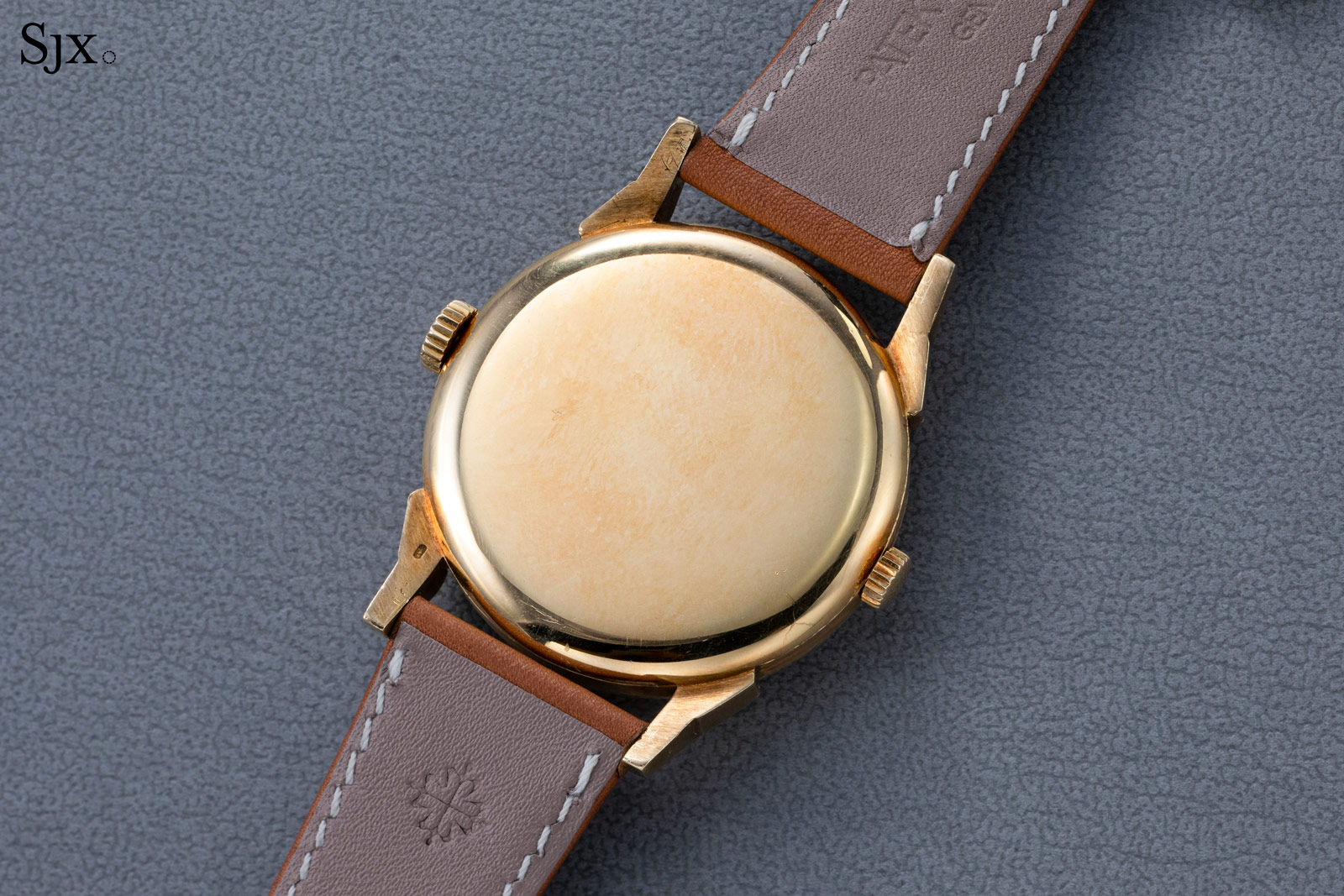 The dial is similarly crisp, with the colours of the enamel remaining vivid, and the surface being free of cracks or damage. The watch looks extremely good in person. 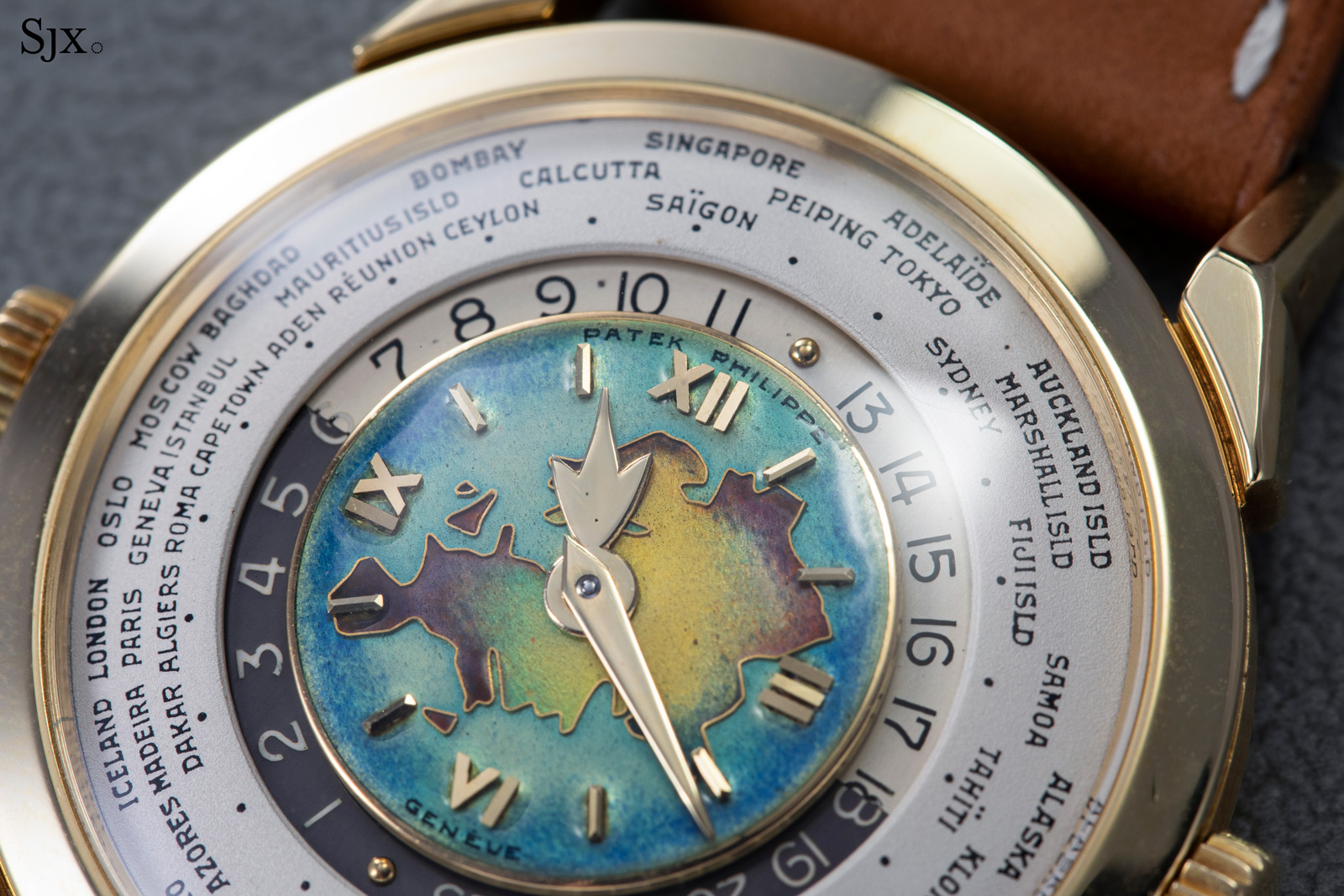 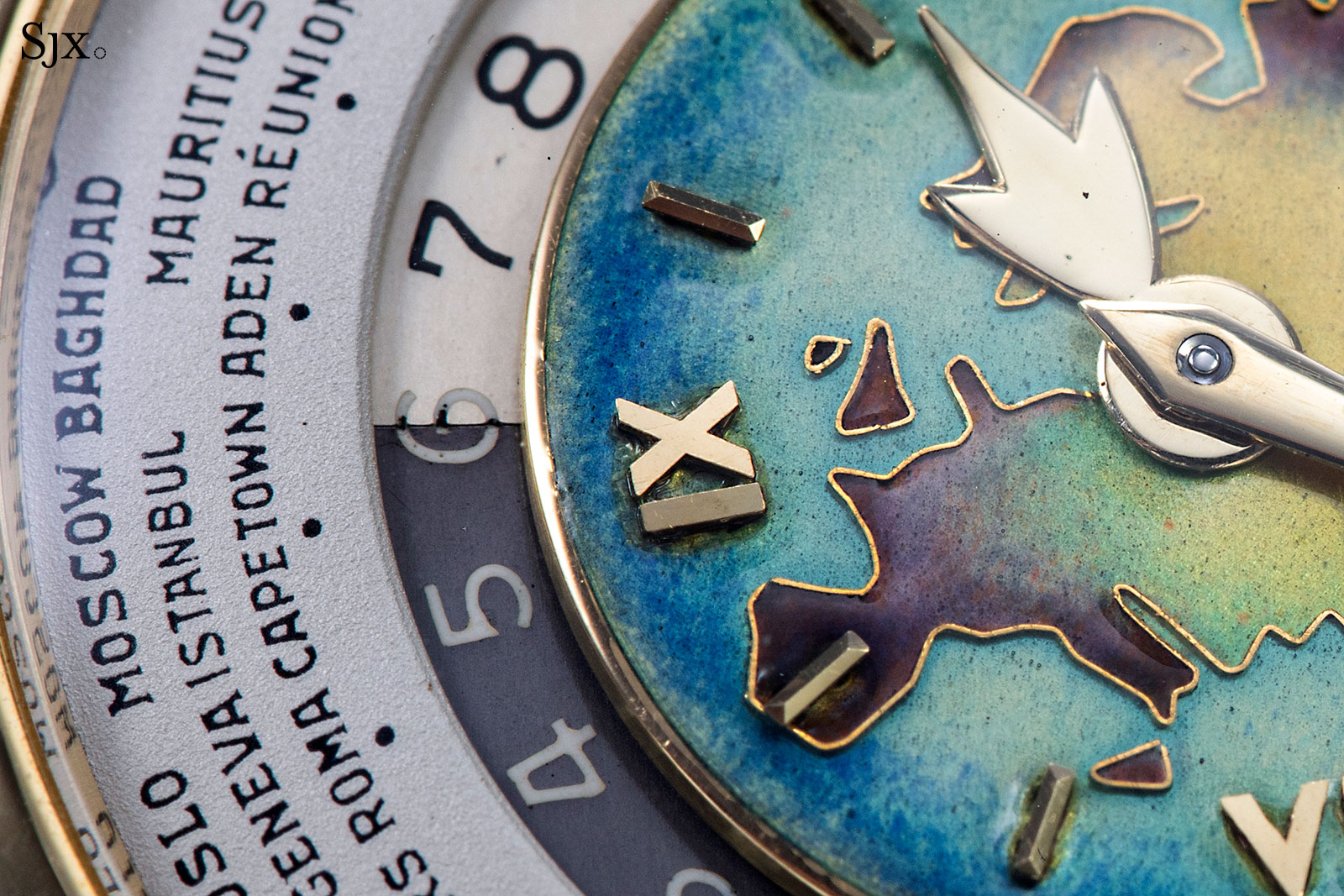 The last major example of the ref. 2523 to sell at auction was a pink gold model with a blue enamel dial featuring the name of Italian retailer Gobbi. It sold in November 2019 for HK$70.18 million, or just over US$9.00 million, fees included. The ref. 2523 “Eurasia” at Phillips has a modest estimate “in excess of 3.5 million” Swiss francs, which will surely be less than what it finally sells for. I spoke with two individuals who collect such watches, and both predicted a final price of about three times the estimate.

While a rich valuation compared with the result achieved for the pink gold example with a blue dial at Christie’s in 2019, the watch market has moved on since then, with both demand and prices having become stronger overall. While there are prominent examples of genres in vintage watch collecting that have softened in the last two years, the ref. 2523 looks likely to benefit from the rising market given its singular nature.