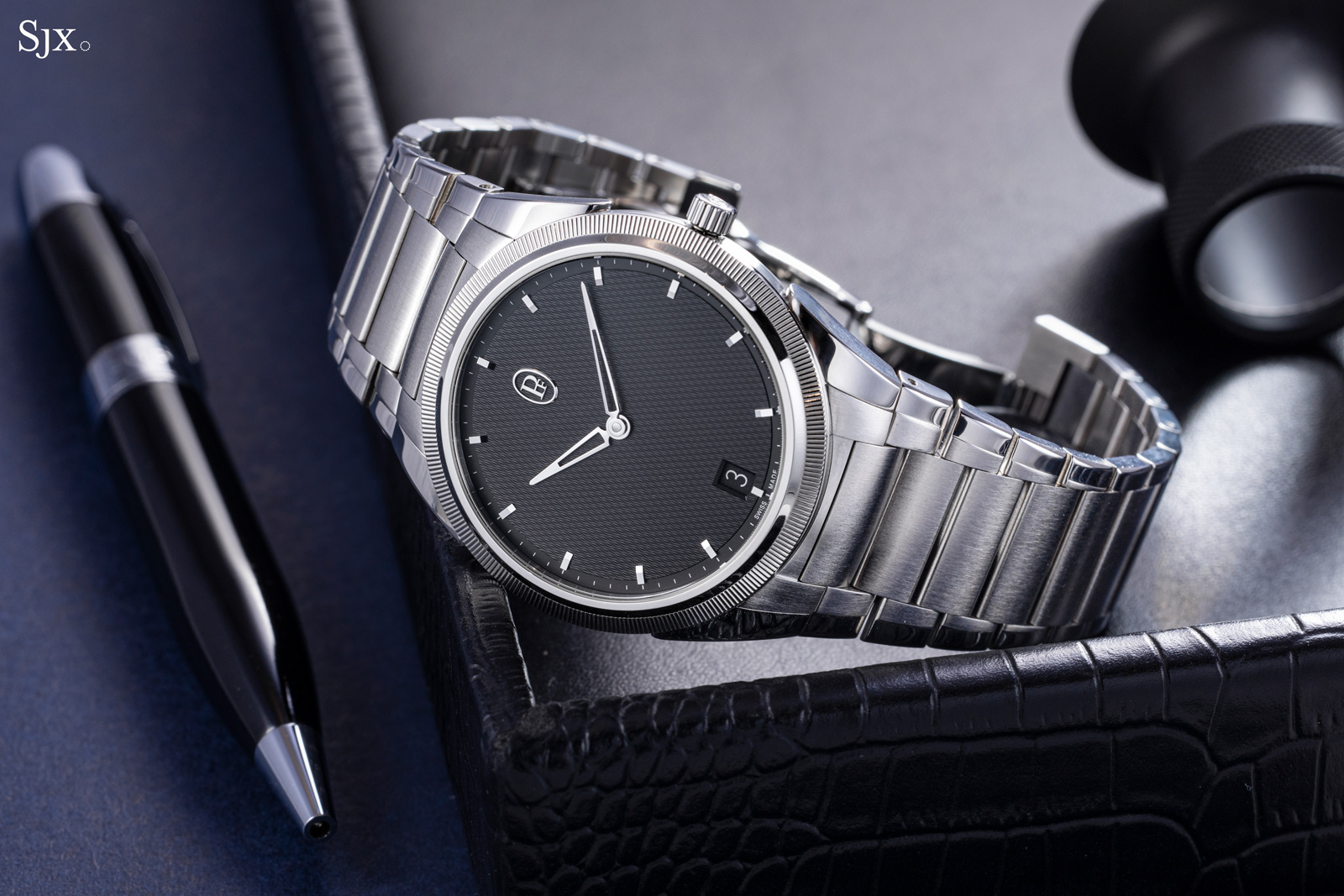 Having enjoyed modest success with its affordable(ish) Tonda GT sports watch launched two years ago, Parmigiani tweaked the concept and debuted a more refined – and pricier – sports watch last year, the Tonda PF. The line up includes the base-model Micro-Rotor in steel reviewed here, along with a chronograph and annual calendar. The Tonda PF Micro-Rotor in steel

Taking generous inspiration from the brand’s more classical timepieces, the Tonda PF Micro-Rotor is a luxury-sports watch with an integrated bracelet.

While the Tonda PF Micro-Rotor doesn’t deviate much from the familiar formula for a luxury-sports watch, it does excel in a few ways, helping it stand out from the competition, most notably with its minimalist dial and ultra-thin automatic movement that are both executed to a high level. 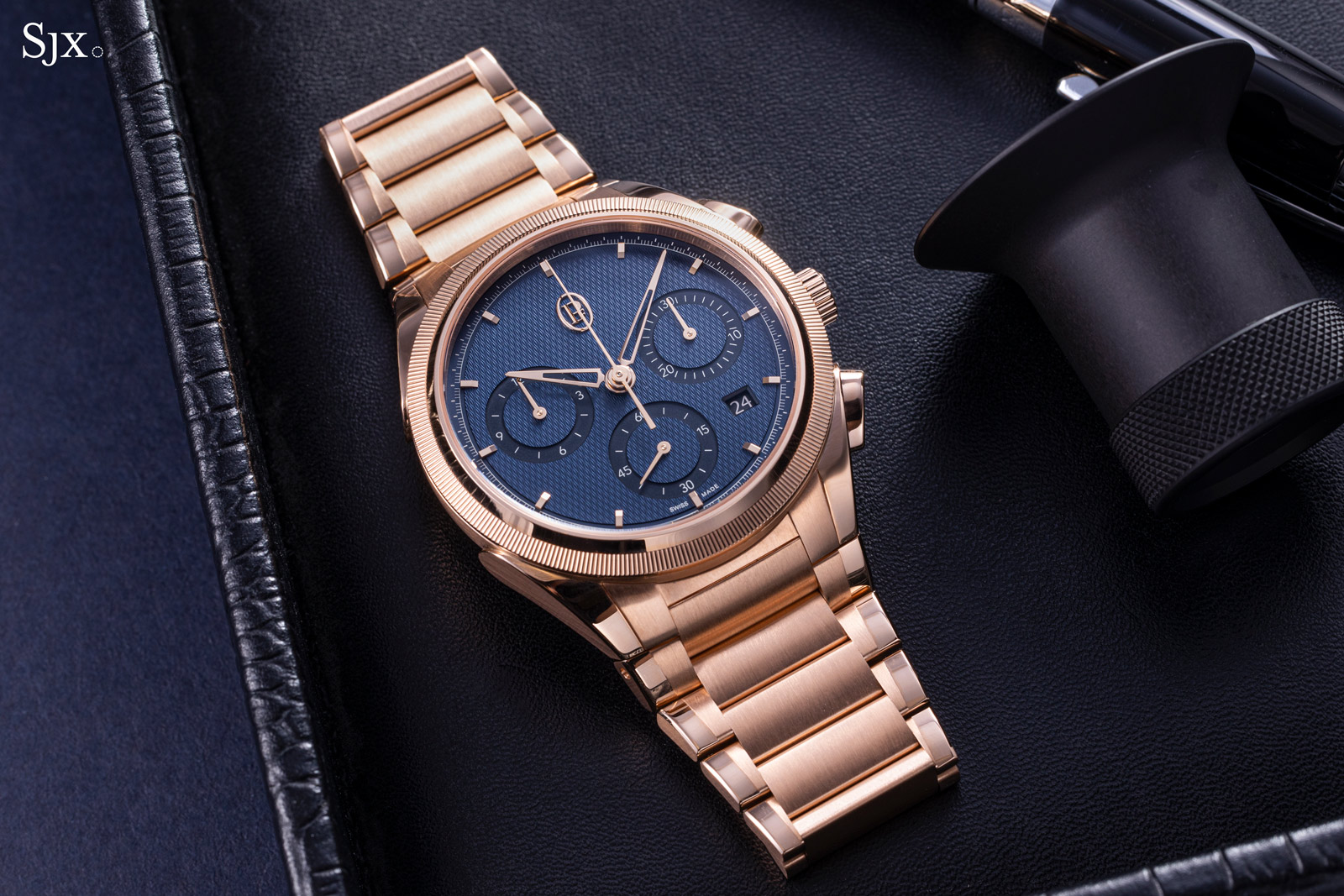 And its bigger brother, the Tonda PF Chronograph in pink gold

The Tonda PF Micro-Rotor is surprisingly thin, making it seem slightly wider than its 40 mm diameter. But it sits flat and elegant, with the lines of the case flowing into the bracelet, giving it a sleek look on the wrist. Despite its delicate looks, the Micro-Rotor (along with the rest of the Tonda PF range) is water resistant to a respectable 100 m.

Unlike many of Parmigiani’s recent models (including its more affordable sports watch, the Tonda GT), the Tonda PF is minimalist in terms of styling. And the Micro-Rotor, being the simplest watch in the collection, is the most pared back. Its dial, for instance, has no branding other than the “PF” emblem. The fuss-free and fine detailing forms a good part of its appeal. 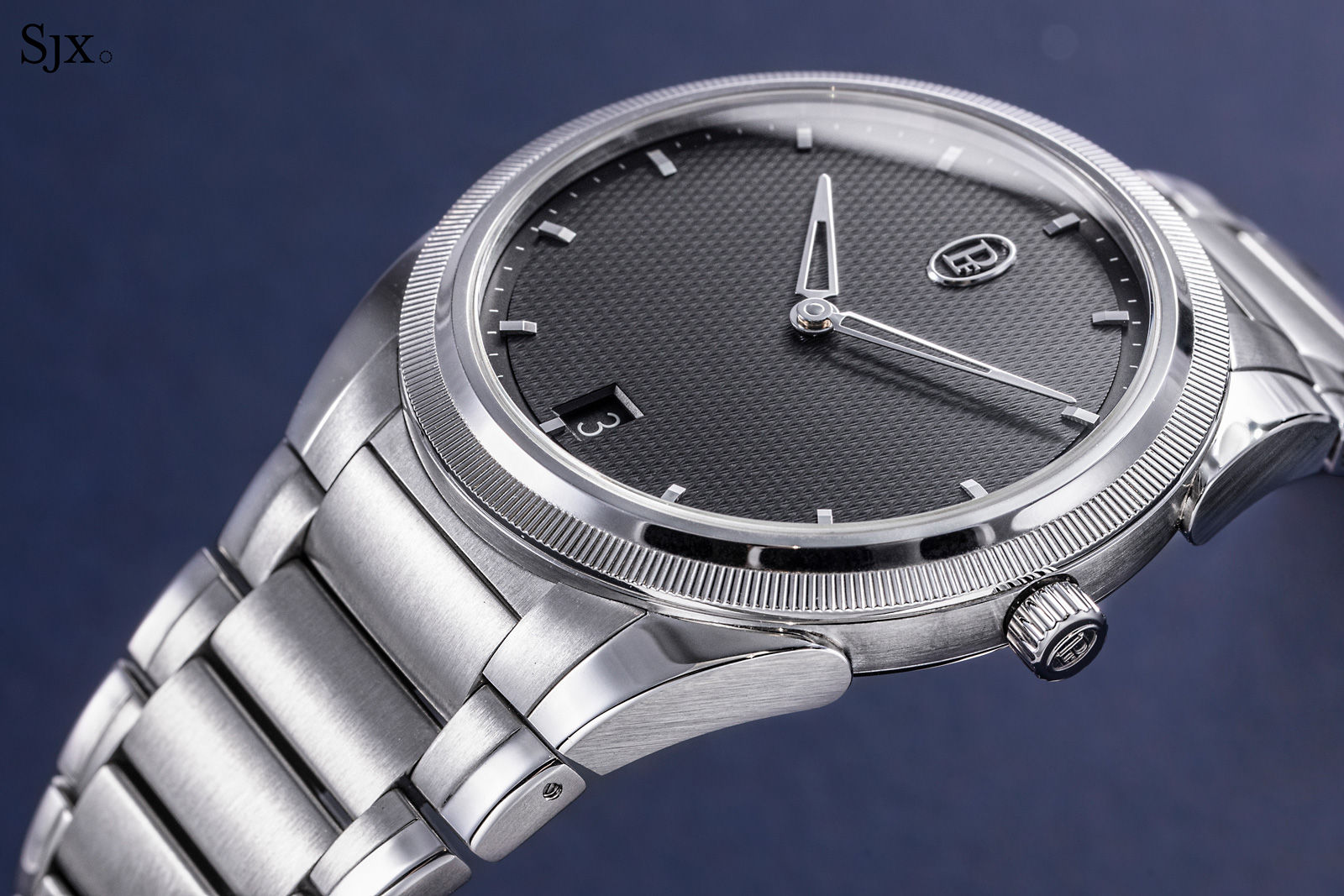 Overall, the Micro-Rotor is an intrinsically appealing watch, but it is also one of many recent entries into a highly competitive space.

Notably, the Tonda PF line was the first major launch after Guido Terreni took the helm in January 2021. Prior to that, Mr Terreni was head of Bulgari’s watch division, where a bestseller is the Octo Finissimo. Unsurprisingly and perhaps intentionally, the Tonda PF does evoke the Octo Finissimo with its slim profile, but in an altogether more refined package, especially in the dial and movement.

And besides the obvious Octo, there are offerings from Chopard, Czapek, Moser, and Parmigiani itself that were launched before the Tonda PF.

While it is not exactly an original concept, the Tonda PF has been executed well in both design and quality, which helps it stand out. The case is steel, but the knurled bezel is platinum for a bit of discreet luxury 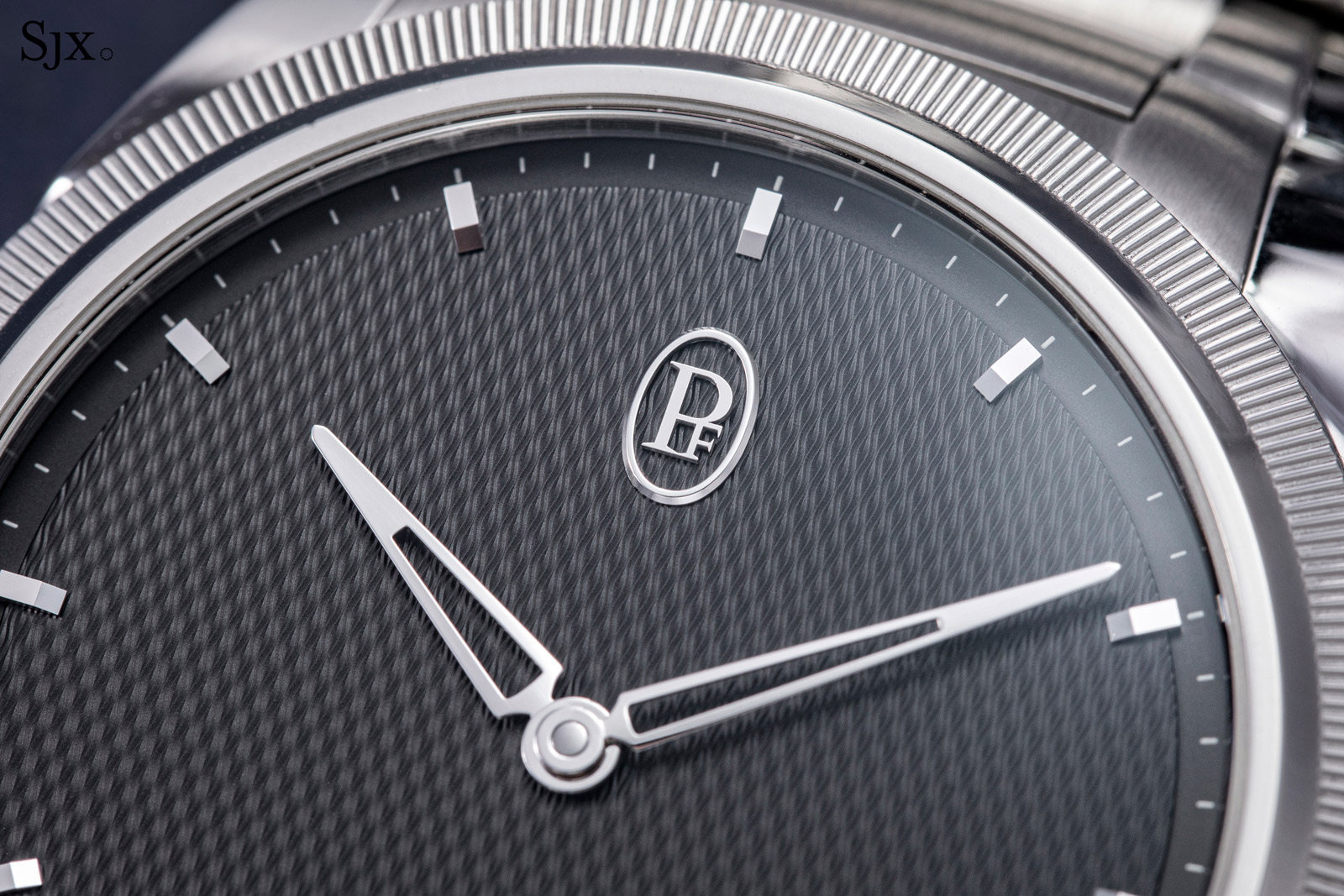 The guilloche is engraved with a hand-operated rose engine

Up close, the Micro-Rotor reveals a high level of fit and finish, particularly in terms of the dial and movement. The barleycorn guilloche on the dial is perhaps the finest engine turning on a sports watch.

And the thin movement is finished to a high level, albeit in an industrial haute horlogerie sense, but still putting it on the same level as comparable movements from the likes of Vacheron Constantin and Patek Philippe.

The case and bracelet, on the other hand, are good, with the highlights being details on the lugs and knurled bezel, as well as the thinness of the bracelet. 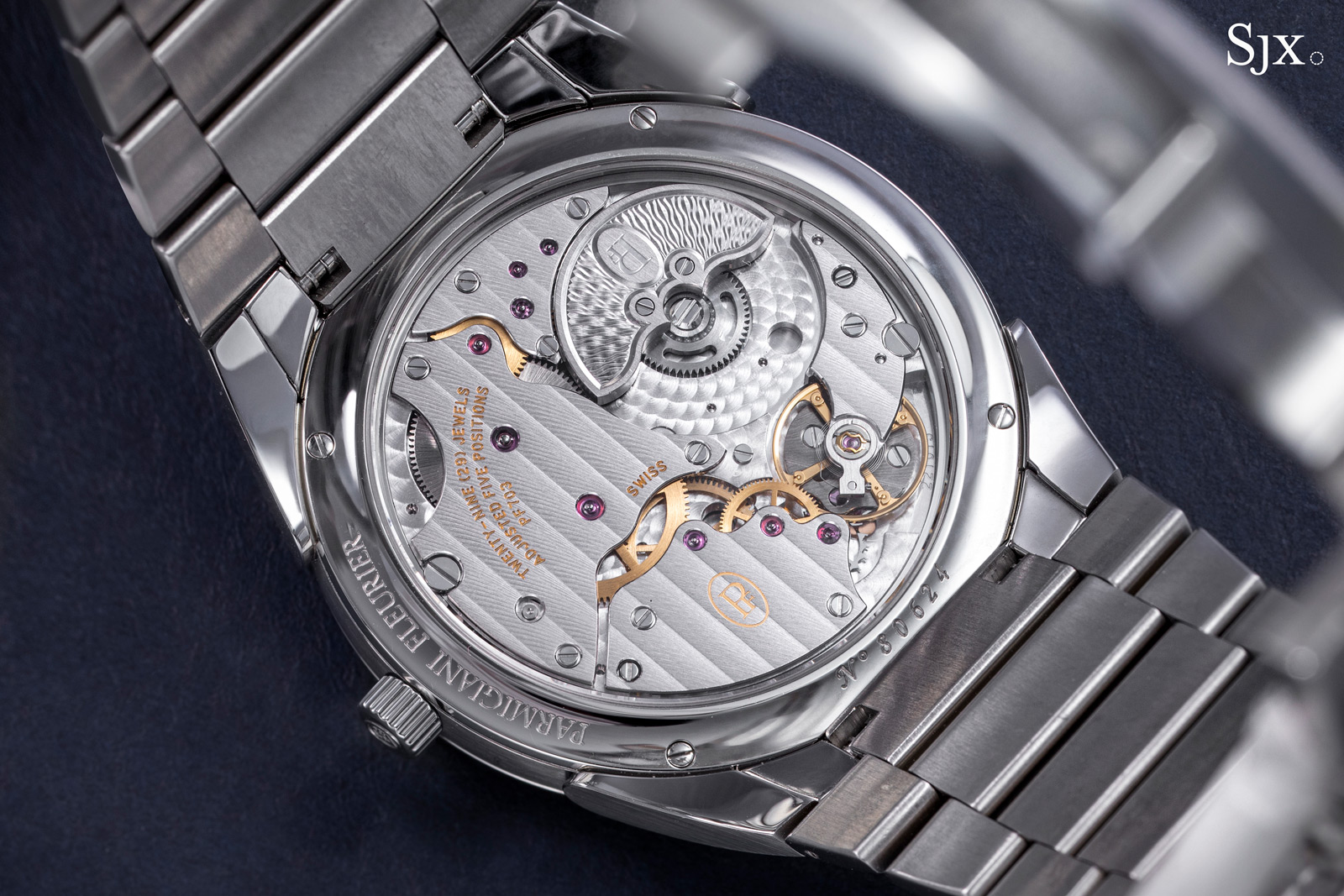 All that means the Micro-Rotor surpasses the competition in the same price range in a few respects, namely the movement and dial.

The fit and finish of its case is comparable to other luxury-sports watches in the same price range, those from Bulgari and Moser for instances, but the movement is certainly superior, practically as good as that of watches that cost a lot more, like from Vacheron Constantin or Patek Philippe. And the dial is of course excellent.

Given Parmigiani’s short track record in this space, it makes the Micro-Rotor something of a dark horse. But with its high level of fit and finish, along with a reasonable price tag, the Micro-Rotor is a compelling proposition. 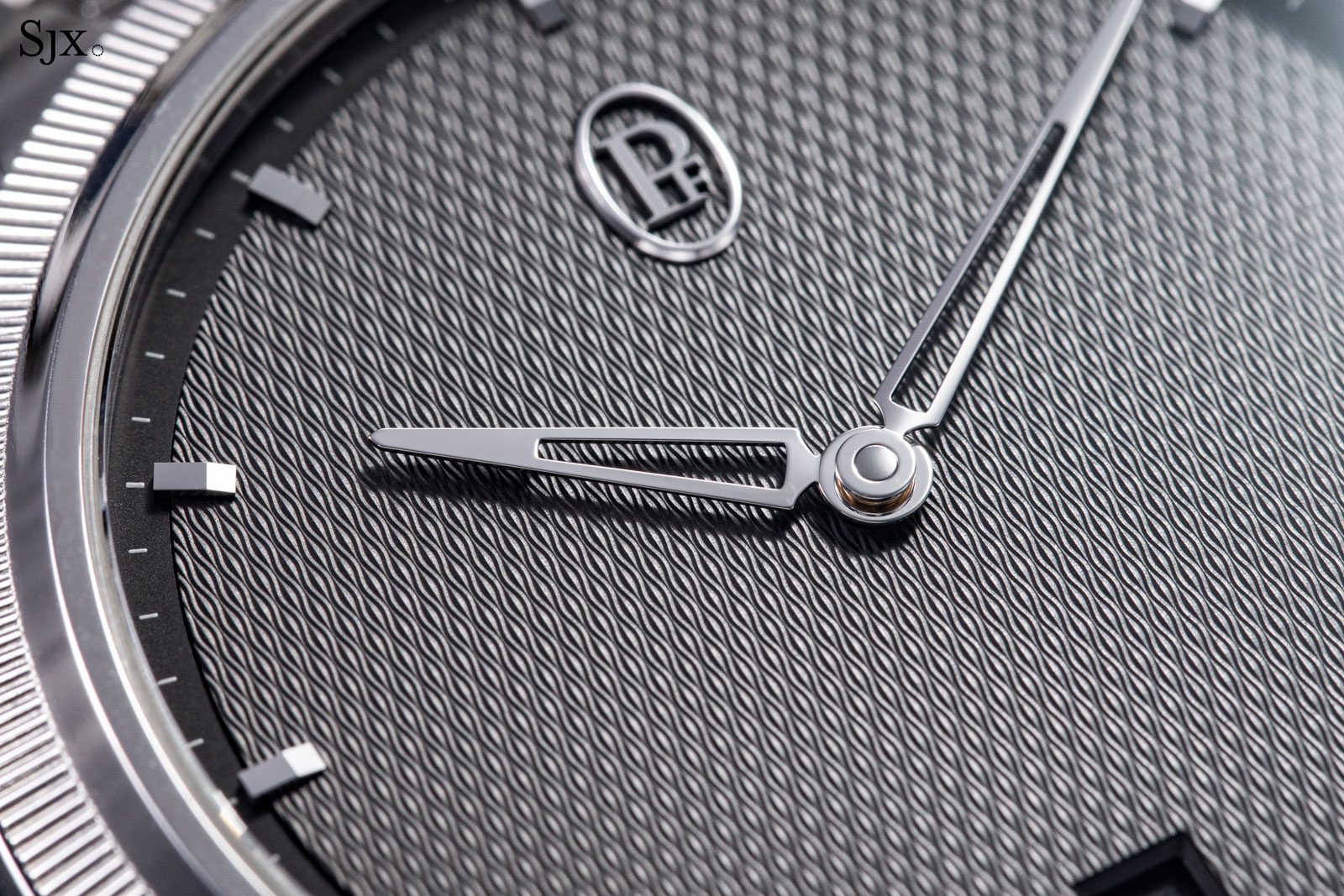 Visually the watch has a broad stance with prominent lugs, which gives it a good presence on the wrist. The bracelet seems to start extremely wide at the case before tapering towards the clasp; it integrates into the case seamlessly.

The round case and wide bracelet bring to mind the Lange Odysseus, which has a similar silhouette but is a far chunkier watch. Not only is the Micro-Rotor slimmer, it is also unusually sleek and simple on its face. But its height of only 7.8 mm makes it one of the thinnest high-end sports watches, even thinner than the Royal Oak “Jumbo” ref. 15202. The Micro-Rotor is only bested by the Octo Finissimo that’s just under 6 mm, but the height of the Micro-Rotor is arguably just nice – neither too thin nor too thick.

That thinness, along with the width of the bracelet, allows the Micro-Rotor to wear like a cuff that clings to the wrist. It feels elegant and restrained without appearing biscuit-thin or feeling fragile. Fairly simple in form, the case is essentially a thin ring with the large lugs that are a Tonda trademark. Though the lugs originated on the Tonda dress watch, they never looked at home there and instead work much better on a sports watch.

Alternating between brushed and polished surfaces, the case finishing is neat and thorough, albeit simple. That’s because the case design straightforward, leaving few opportunities for fancy finishing. And the case also does without the flourishes found on more expensive sports watches, like polished bevels along the edges of the bracelet and case. Still, it is finished to a degree comparable to other luxury-sports watches in this price range. 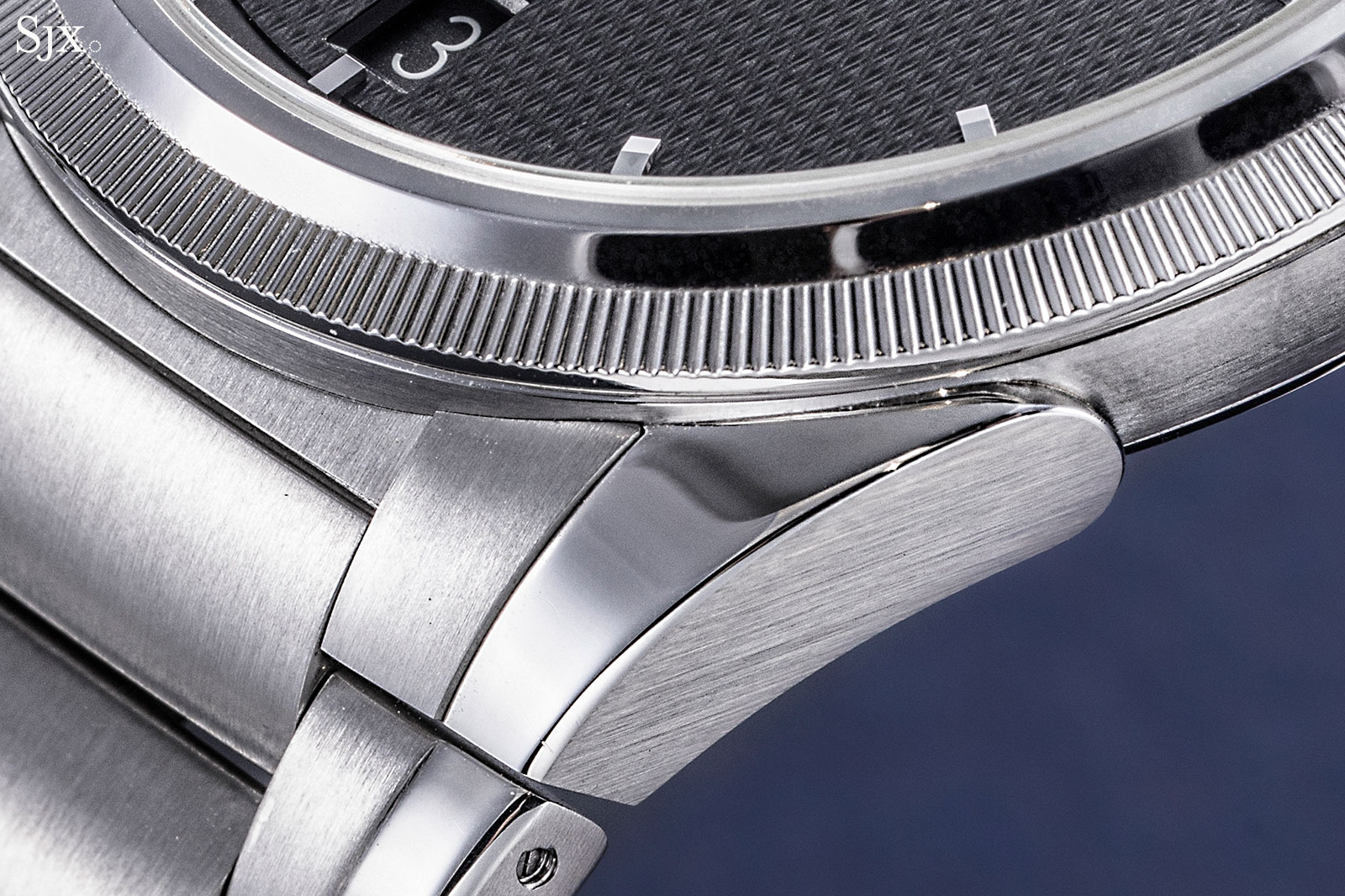 But the case does come with one bit of discreet luxury – the knurled bezel is platinum. It’s practically impossible to distinguish the platinum bezel from the steel case, but it is certainly a pleasing bonus that will appeal to those who appreciate low-key extravagance.

In contrast to the bezels found on Parmigiani’s higher end Toric models, the knurling on the Tonda PF is done with via an automated milling process in a CNC machine. With a polished finish and fine knurling, the result is nonetheless appealing. The most elaborate feature of the case is the knurled bezel

Finished to a similar quality as the case, the bracelet has just the right proportions. It is wide enough to preserve the overall aesthetic and maintain a feeling of solidity, while being thin enough to match the case height. And it has a concealed, double-fold clasp, which continues the flowing lines of the case and bracelet.

However, the clasp lacks a micro-adjustment mechanism and the links are all one size, which means that getting a perfect fit might not be possible for some wrists. A hidden two-step adjustment system within the last links at the clasp, as found on the Overseas or Nautilus, would be ideal since it would retain the same look while improving fit. 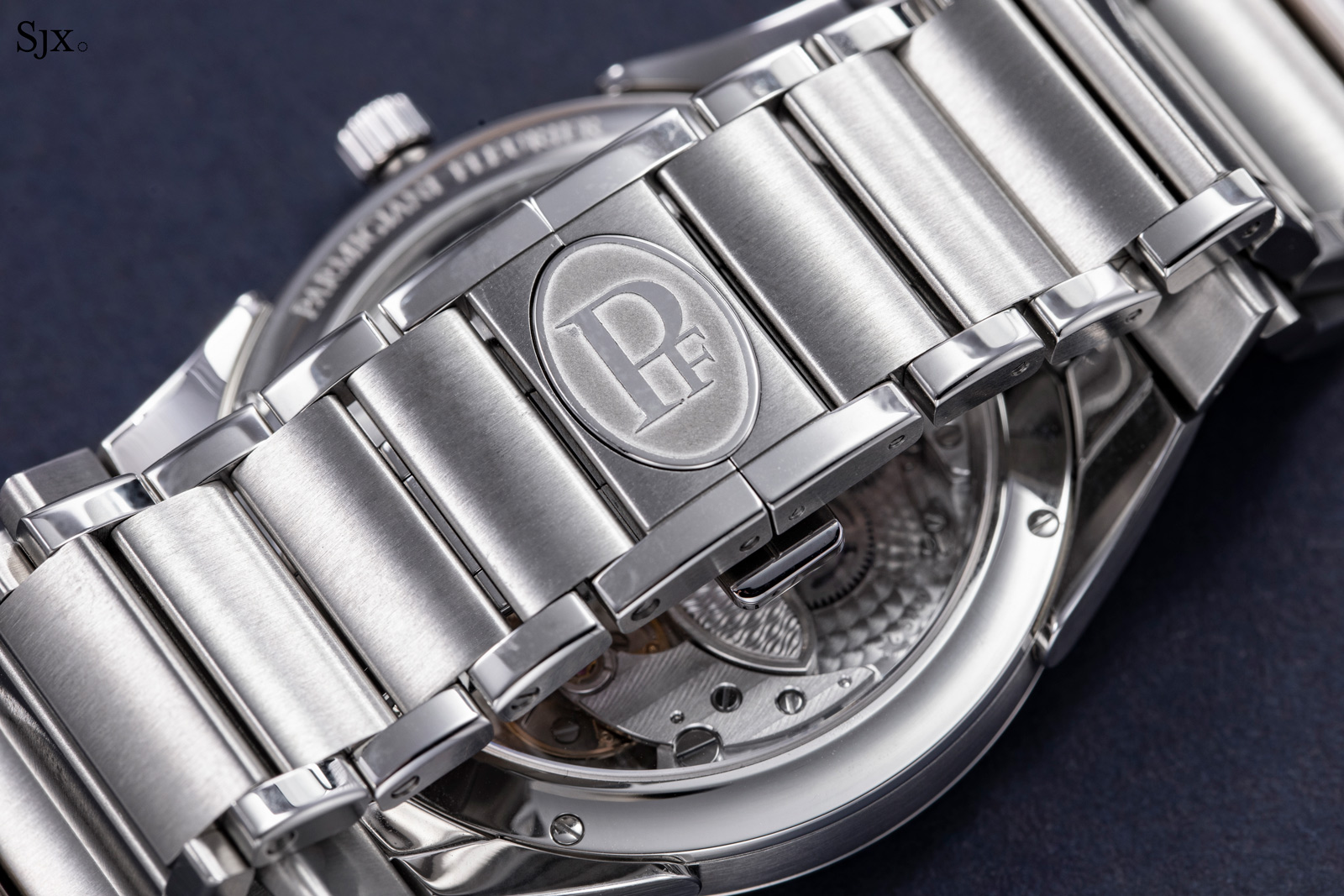 The dial of the Tonda PF is done by hand with a rose engine that engraves the grain d’orge pattern.

The guilloche is extremely fine, so fine that it resembles a texture rather than pattern at a distance. I cannot think of another sports watch in this price range with a dial having engine turning of this quality. As is often the case with Parmigiani watches, the elements on the dial – hour markers, hand, and “PF” emblem – are solid gold. Even though the dial is evidently high end in terms of materials and decoration, it is whispers rather than shouts, much like the platinum bezel.

Avoiding the over-designed dial of its cousin the Tonda GT, this has none of the superfluous elements one might expect and looks all the better for it. Even the “Swiss made” label at six is barely visible, being relegated to the narrow minute track and in small font. The Tonda PF, however, does have a date. It is in the optimal six o’clock position so preserves the symmetry of the dial, while also being in the same colour as the dial so that it recedes into the background somewhat.

And it also helps to balanced the “PF” emblem under 12 o’clock. All things considered the date doesn’t diminish the appeal of the dial, but taking away the date would make it look a bit better. The Tonda PF is powered by the PF703, a thin automatic movement with a micro-rotor. It is the VMF 5400 produced by Vaucher, the movement specialist that’s a sister company of Parmigiani.

At 30 mm wide and just 3 mm high, the PF703 is fairly large but very thin and ideally sized for the Tonda PF. It has a single barrel wound by a micro-rotor. Though the power reserve is comparatively short at 48 hours, it is acceptable given the thinness of the movement (which limits the thickness of the mainspring). Supplied to a variety of brands ranging from Hermes to Richard Mille, the VMF 5400/5401 is available in a range of finishes and styles. The PF703 in the Tonda PF is one of the highest-end iterations of the calibre. It has been dressed up appropriately for a luxury-sports watch.

Parmigiani does excellent movement finishing across its product range, and the PF703 lives up to expectations. Like almost all sports watches in this price range – and even those further up – the decoration is done by machine and perhaps refined by hand. The result is attractive and certainly fitting.

The bridges are finished with Cotes de Geneve, the base plate with perlage, while the micro-rotor is platinum and decorated with a barleycorn guilloche just like the dial. But it also has high-end technical features, including the free-sprung, adjustable mass balance wheel as well as ceramic ball bearings for the rotor mounting. When examined up close, the decoration is refined and comprehensive, even the stud holder for the hairspring (above right) has the faintest of bevelling That said, the PF703 is not quite the fanciest version of the movement, which would be the ones used by independent watchmakers like Torsti Laine. That version is almost identical, save for the extra inward angles along the bevelled edges of the bridges, which gives it a more refined appearance, not to mention requiring slightly more hand finishing.

Still, as luxury-sports watches go, the Tonda PF boasts one of the most refined calibres on the market in both construction and finish.

The Tonda PF is elegant and restrained, but has enough fine details that it doesn’t look bare. Both its dial and movement rate higher than that of the competition in the same price bracket. And most importantly, it looks and feels good on the wrist.

Correction February 9, 2022: The bezel on the Tonda PF is milled in a CNC machine, and not knurled by hand as stated in an earlier version of the article.