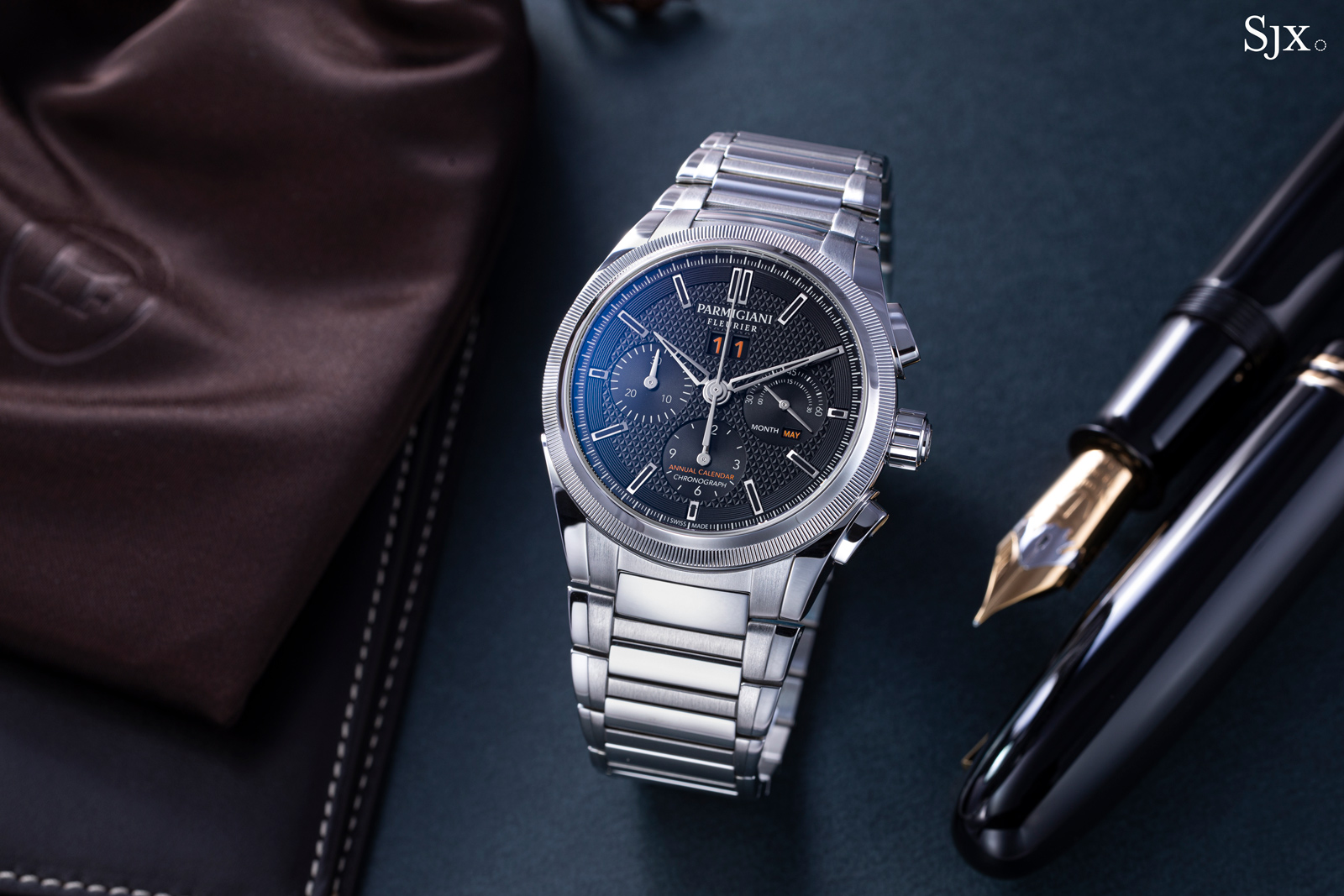 Parmigiani is, however, pretty late to the game, since the high-end sports watch with an integrated-bracelet is well used idea. The big names have been doing it since the 1970s, courtesy of Gerald Genta, but the recent popularity of the style means many brands have had a go.

Notable new entrants include Chopard, H. Moser & Cie., and even Citizen. Now their ranks are joined by Parmigiani, which, against the odds, has pulled it off with an original, high-quality luxury-sports watch. 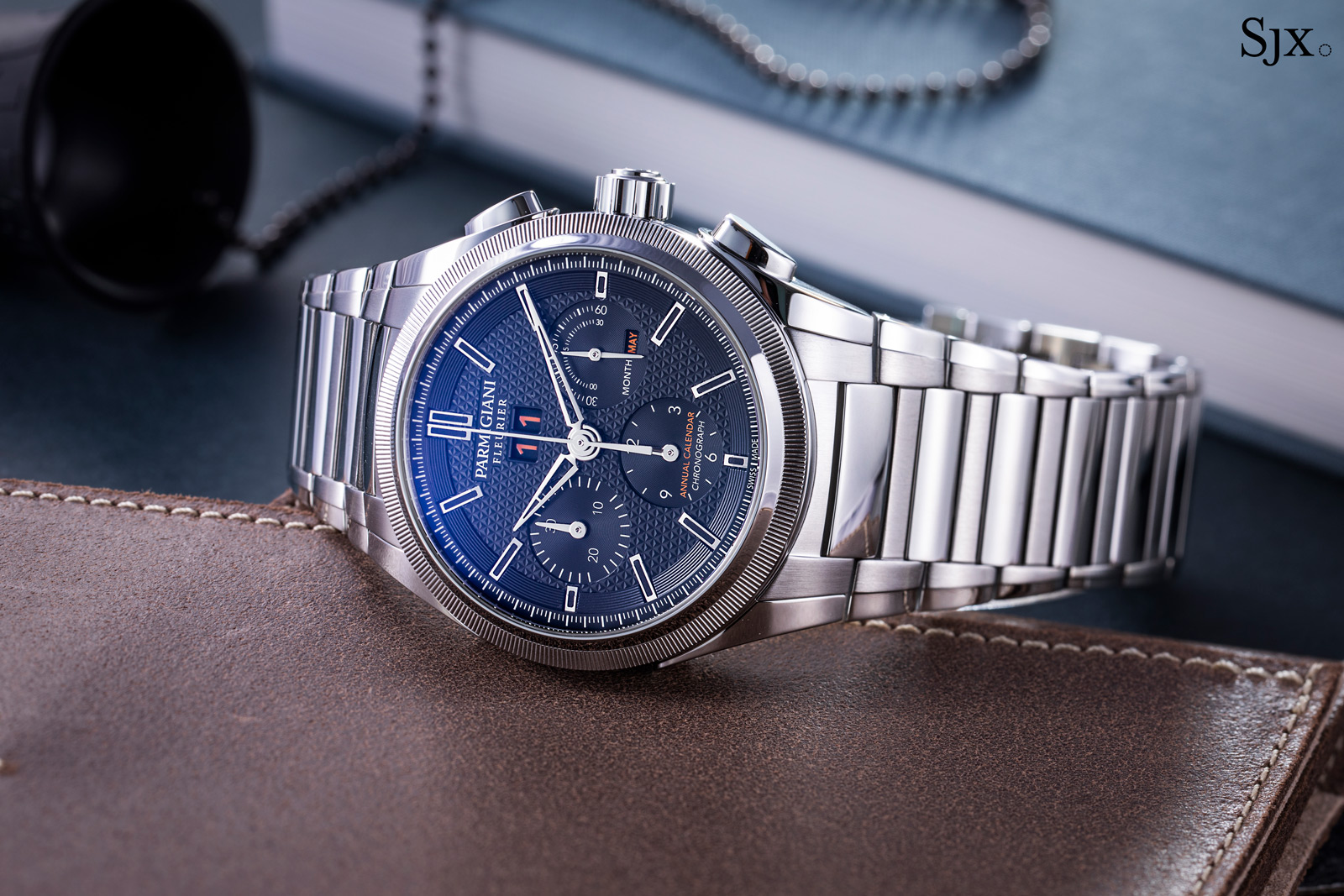 The origins of the Tonda GT might not seem promising. Lacking a historical sports watch design, Parmigiani elected to instead transform one of its dress-watch cases into a sports watch.

Surprisingly, the Tonda GT is arguably better looking than the Tonda dress watch. The most compelling offering in the sports watch line is the Tondagraph GT, which combines a chronograph, annual calendar, and sensible pricing.

On paper the Tondagraph GT might not seem interesting. It’s yet another integrated-bracelet luxury-sports watch – and it’s powered by a modular movement.

But in hand, the watch is surprisingly appealing. The case is big but thin, with a bracelet that’s equally slim, creating a watch with a comfortable, streamlined profile on the wrist. 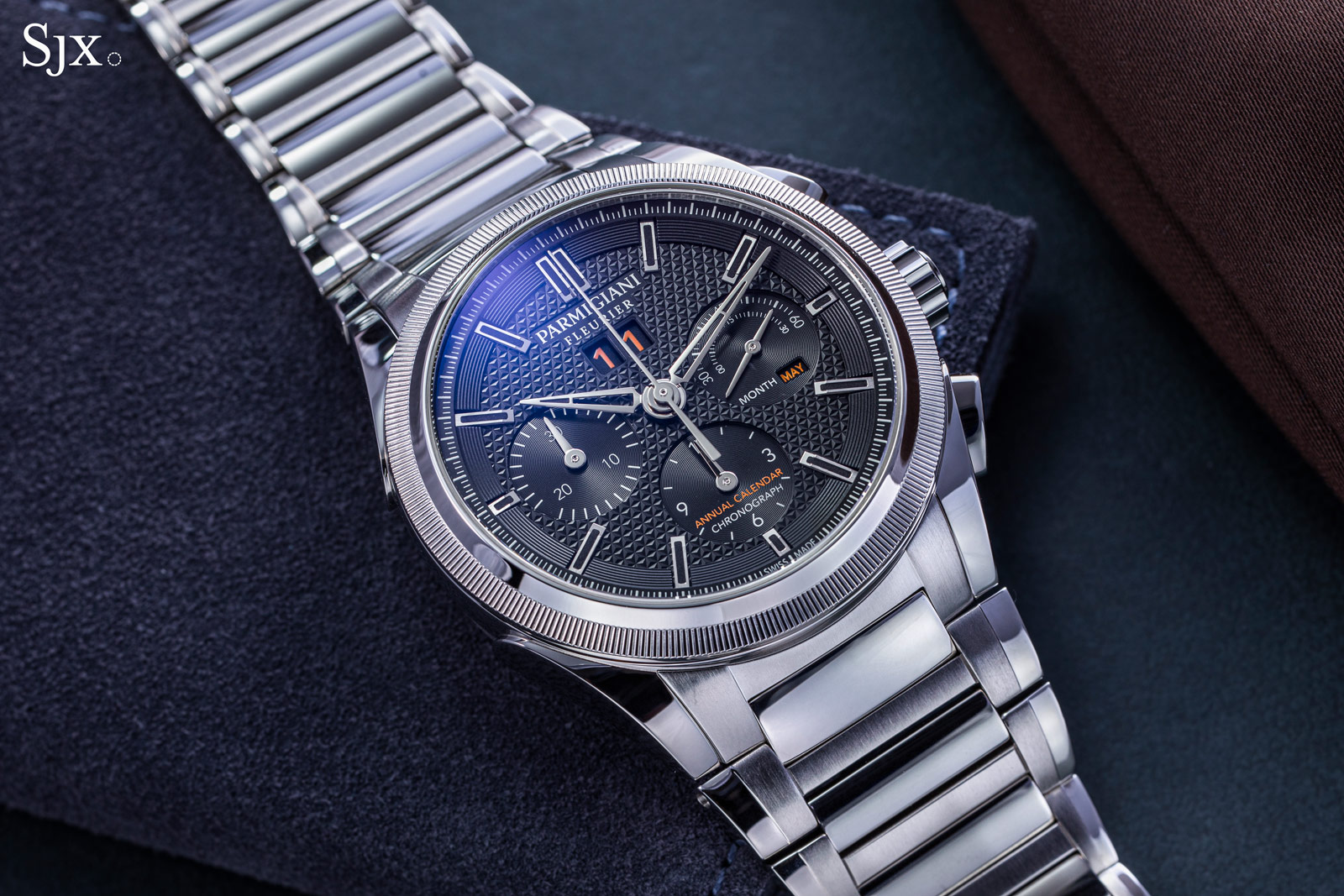 Even though the Tondagraph GT adopts design elements from Parmigiani’s formal watches, namely the flared lugs and fluted bezel, it comes together well as a sports watch. The watch looks good on the wrist.

Up close it is also appealing because of the quality and finish. The dial, for instance, features a precise, stamped guilloche and applied markers.

Admittedly, the dial’s design doesn’t quite live up to its quality. The design is good enough, but could be much better. It includes too many unnecessary elements, including orange accents and black Super-Luminova, and a logo that’s one size too large. 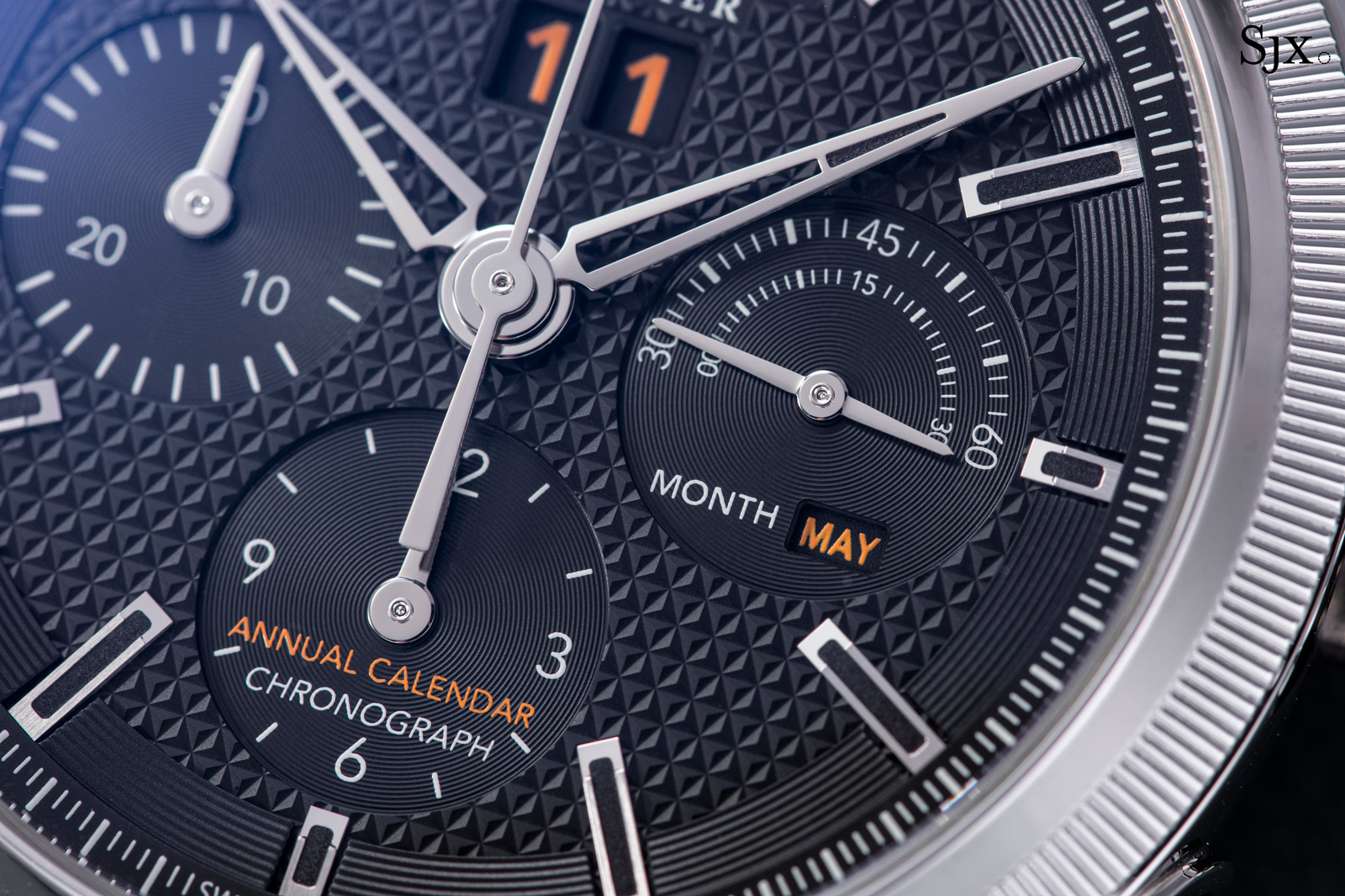 Inside is a movement that’s as high quality as a modular movement can be. In fact, the PF043 movement inside is essentially the same calibre found in the Richard Mille RM 11. While the RM 11 has a far more modern appearance, the PF043 is finished traditionally, and finished well.

More than the quality, the movement stands out for its complications: both a chronograph and an annual calendar, which makes the Tondagraph GT a value buy at its approximately US$20,000 retail price.

It’s worth pointing out that the gold version of the Tondagraph GT is powered by an entirely different movement, the PF071. That calibre is high spec and high end – integrated, high frequency, column wheel – but the gold version is far more expensive. No doubt the gold model is a superior watch, but it’s less of a value proposition. 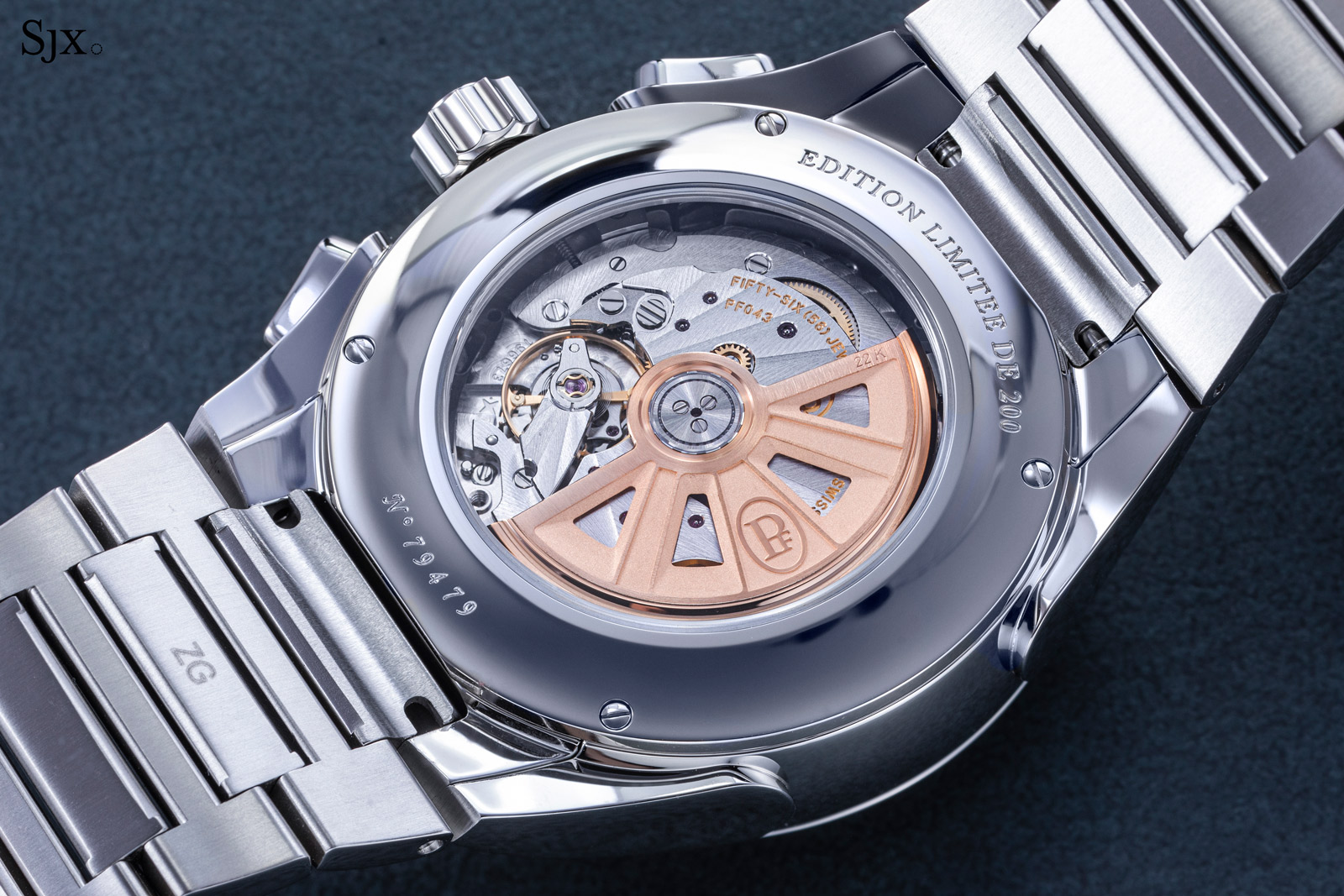 The Tondagraph GT’s most obvious competitor is the Bulgari Octo Finissimo Chronograph GMT, which is slimmer and has an integrated movement.

Both watches are are priced similarly, but the Tondagraph GT is finished to a higher standard, and its annual calendar is arguably more useful than a second time zone, which gives the Parmigiani a slight edge. 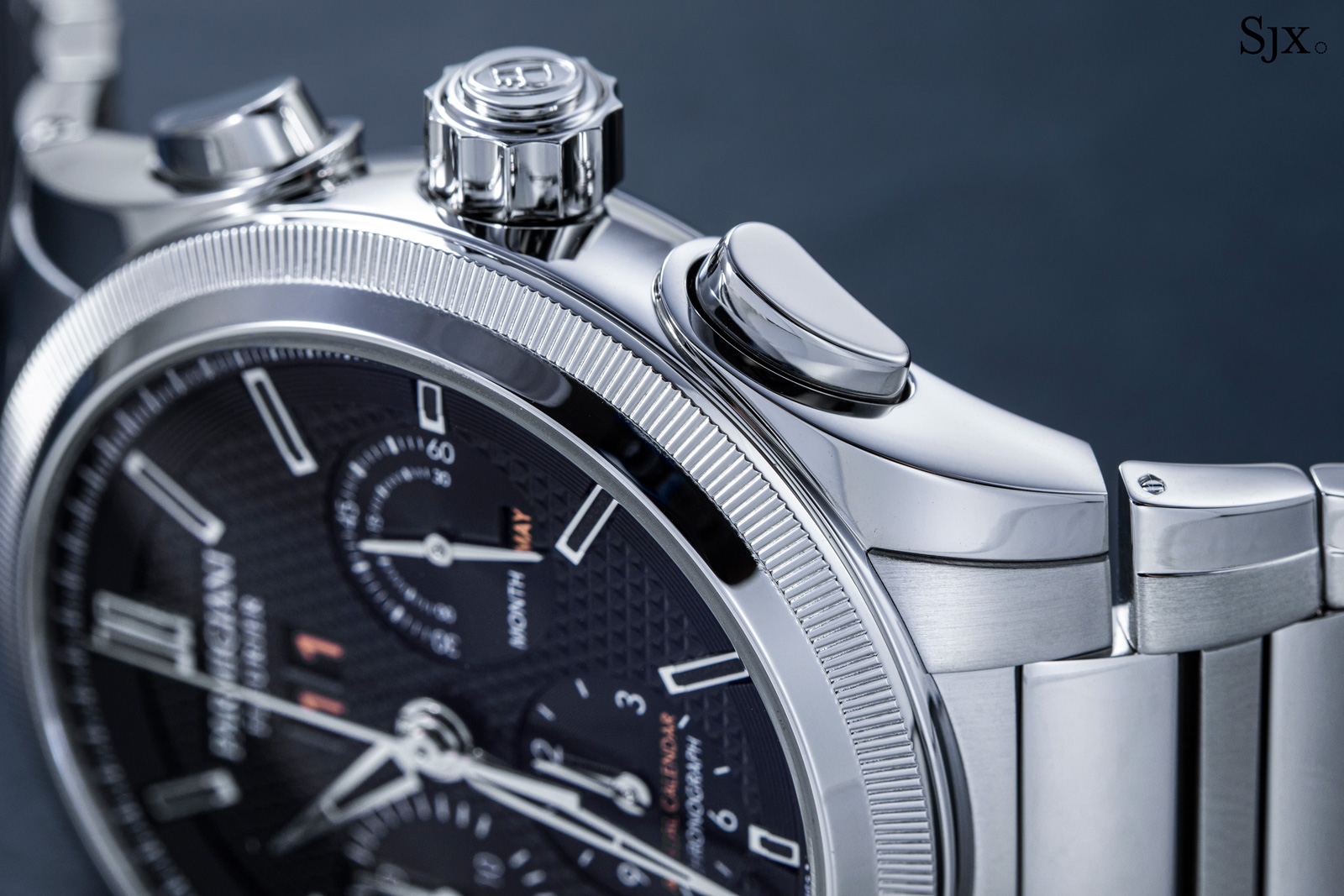 Italian for “round”, tonda is the name of Parmigiani’s collection of round watches that are available in a variety of styles and complications. The Tonda GT (and by extension the Tondagraph GT), however, is the brand’s range of sports watch.

The sports watch takes the lines of the Tonda dress watch, but transforms it into something more athletic that still manages to retain an elegant style. In fact, the Tonda GT case is actually more appealing than the original Tonda because the arched lugs always seemed a bit too big for a dress watch. 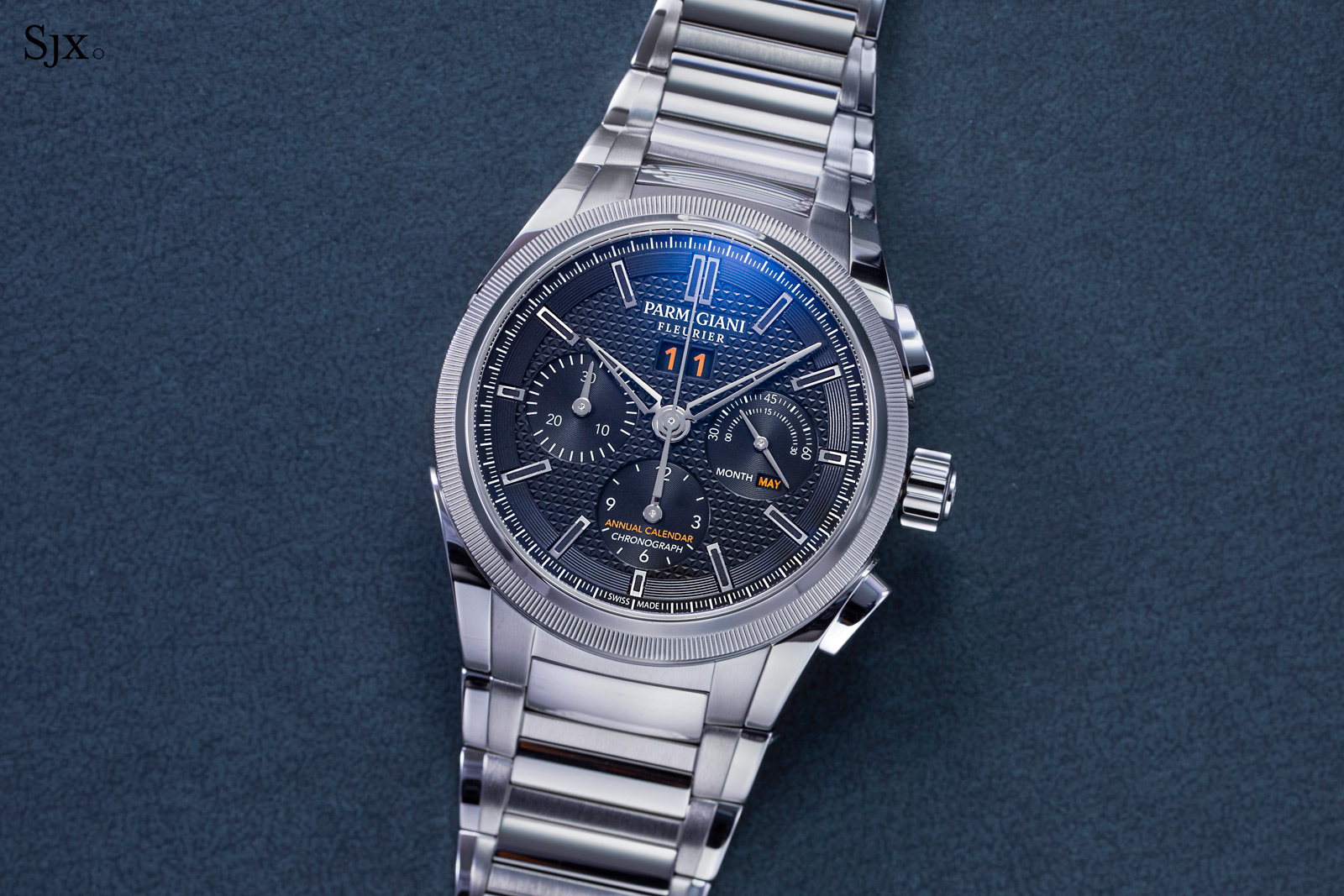 The Tondagraph GT is wide but thin at 42 mm by 13.7 mm, which gives it sleek proportions. At the same time, the case not too thin. With a diameter this large, an extremely thin case would create a biscuit-like feel.

The downward curve of the lugs give the watch a good fit on the wrist. They are also set wide apart on the wrist, which leaves the watch feeling a bit like a bracelet that sits snug on the wrist. Also, the links are wide but short, resulting in a softer feel. 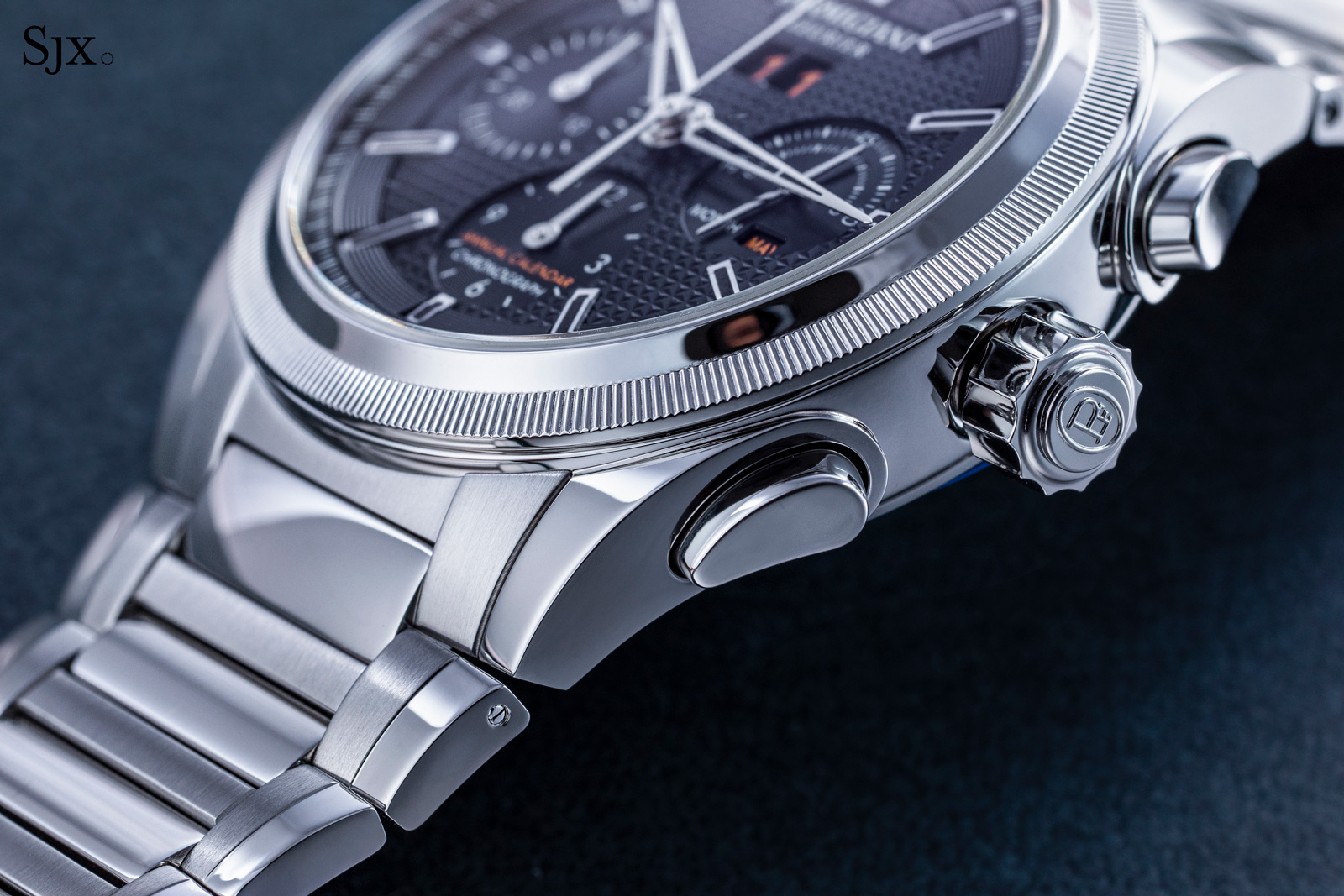 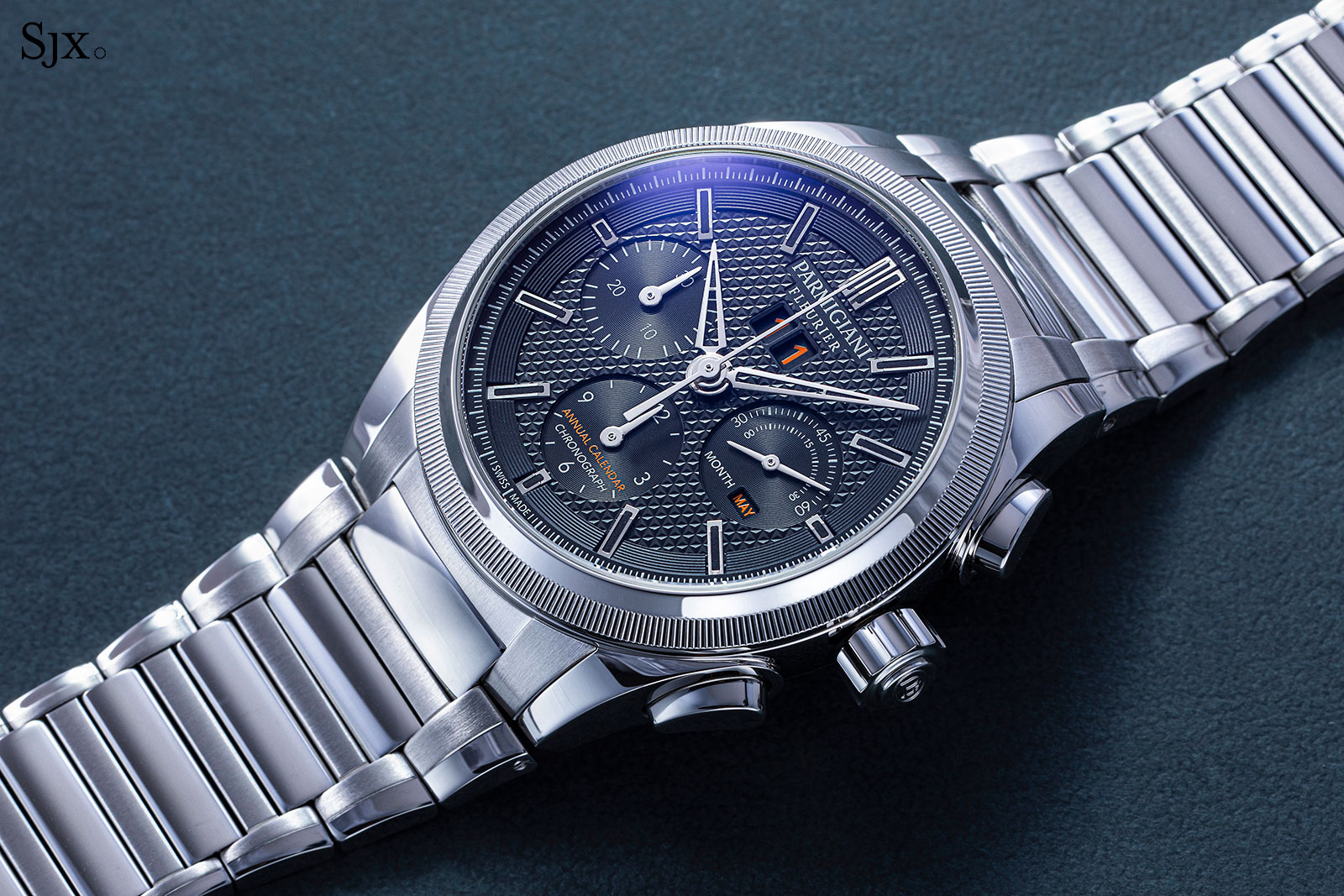 Two details worth noticing are the bezel and lugs, the key elements of the Tonda dress watch. First, the arched lugs have been made wider and shorter, while also incorporating the chronograph pushers that take the same shape.

And the knurled bezel hails from Parmigiani’s founding, having been incorporated in the brand’s first model, the old-school, Breguet-inspired Toric case. Just as it has always been done at Parmigiani, the knurling on the Tondagraph bezel is done by hand – by pressing a metal wheel against the bezel – creating an appealing but discreet bit of decor. 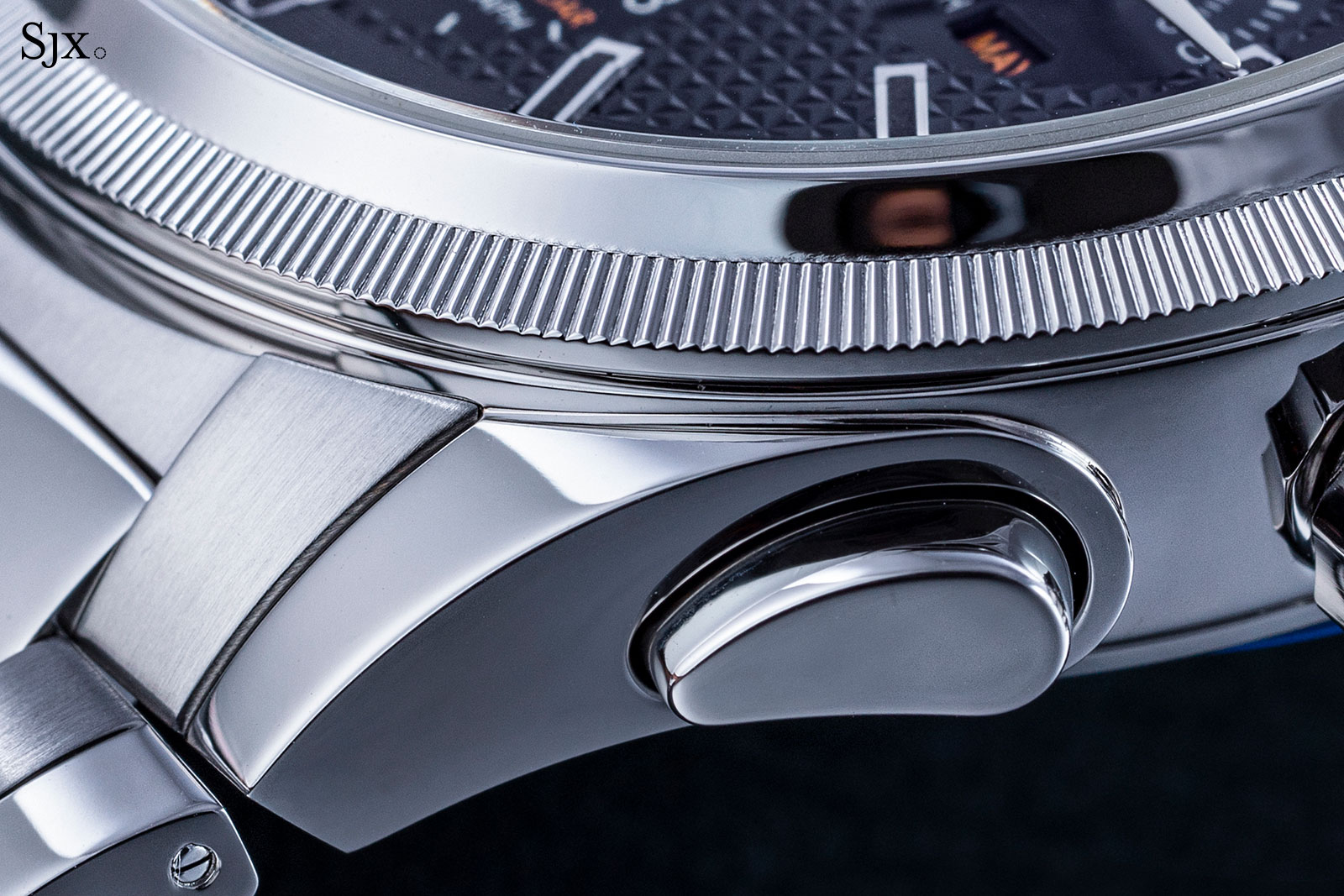 However, some aspects of the exterior can be improved. One is the double-fold clasp. It’s functional and secure, but thick relative to the bracelet.

And the other is the case finish, which is done well but has too many polished surfaces. The watch would look better with the surface finishes inverted – more brushed surfaces and mirror polishing just to accent edges and details. 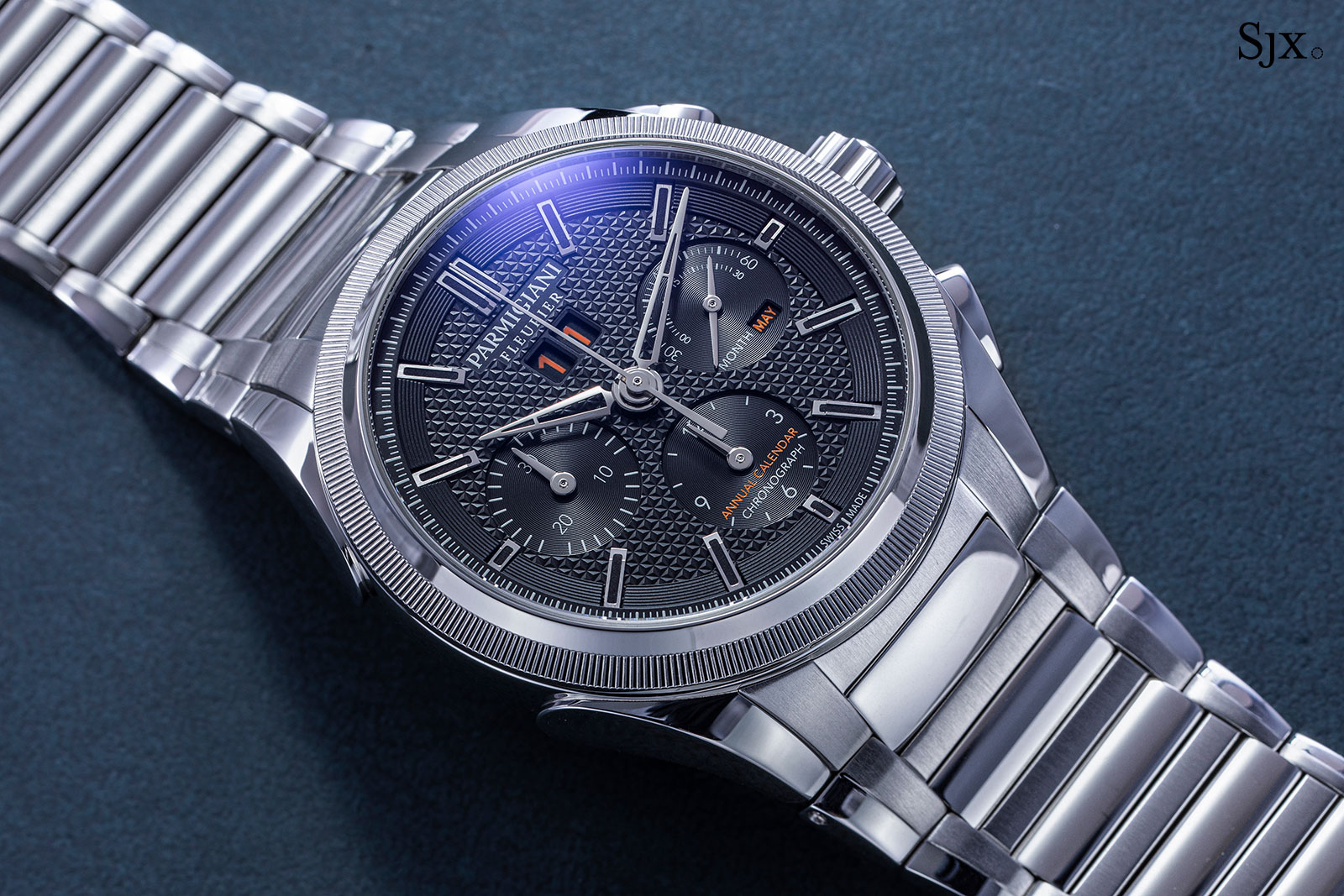 Like the bezel with its knurling, the dial is lightly textured – enough to make it interesting but not too fussy for a sports watch. And needless to say, it is executed in typical Parmigiani fashion, which is good. The brand is essentially vertically integrated – its sister companies specialise in dials, hands, cases, and bracelets – which means high-quality components are the norm. 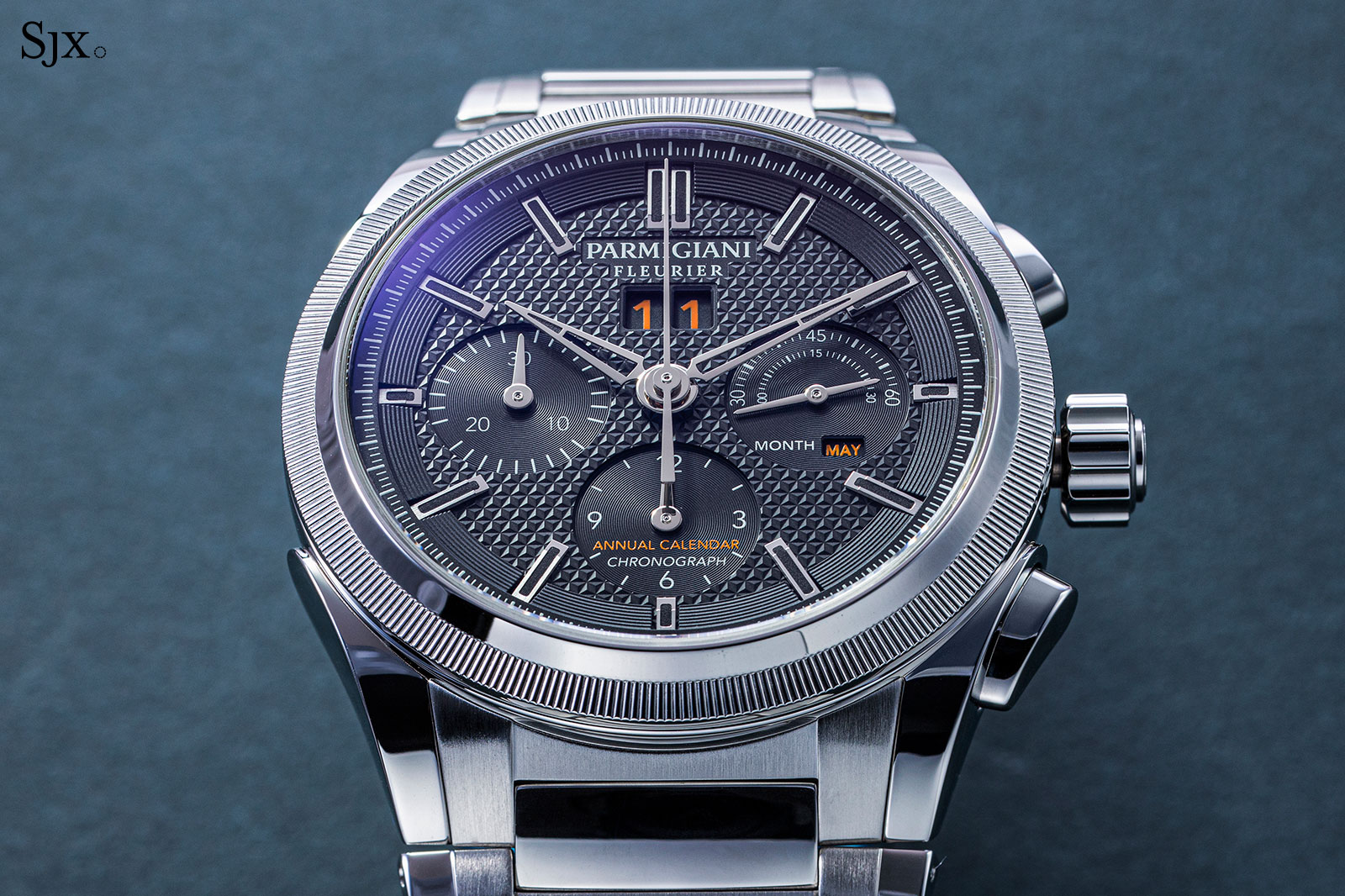 The dial is finished with guilloche Clou triangulaire, which resembles hobnail engine turning but is actually made up of tiny, three-sided pyramids instead of the four-sided structures that characterise hobnail.

Slightly glossy, the guilloche gives the dial a noticeable but restrained texturing that goes well with the lance-shaped hands. And the quality is excellent, especially for a complicated watch at this price; the guilloche is especially well done. 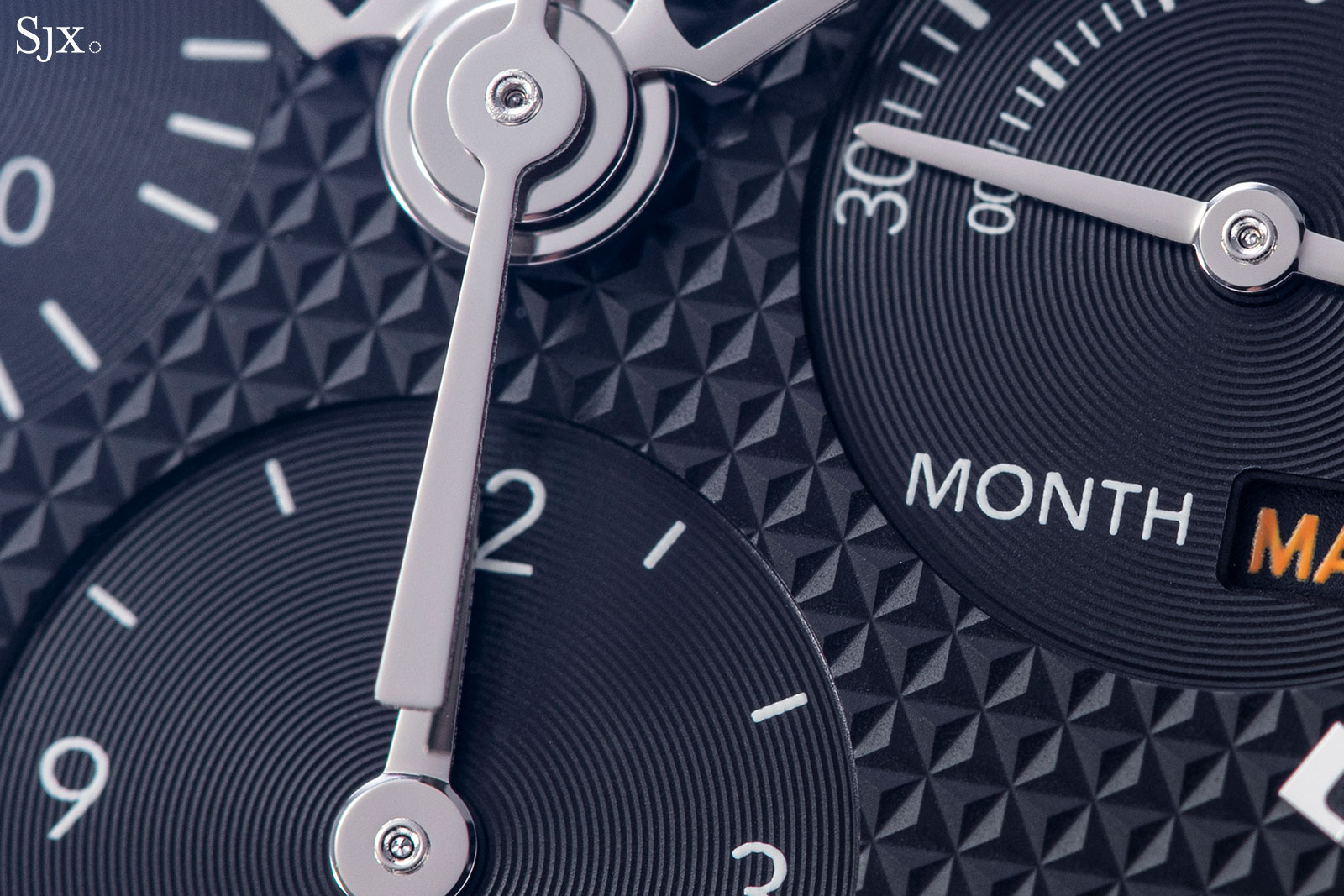 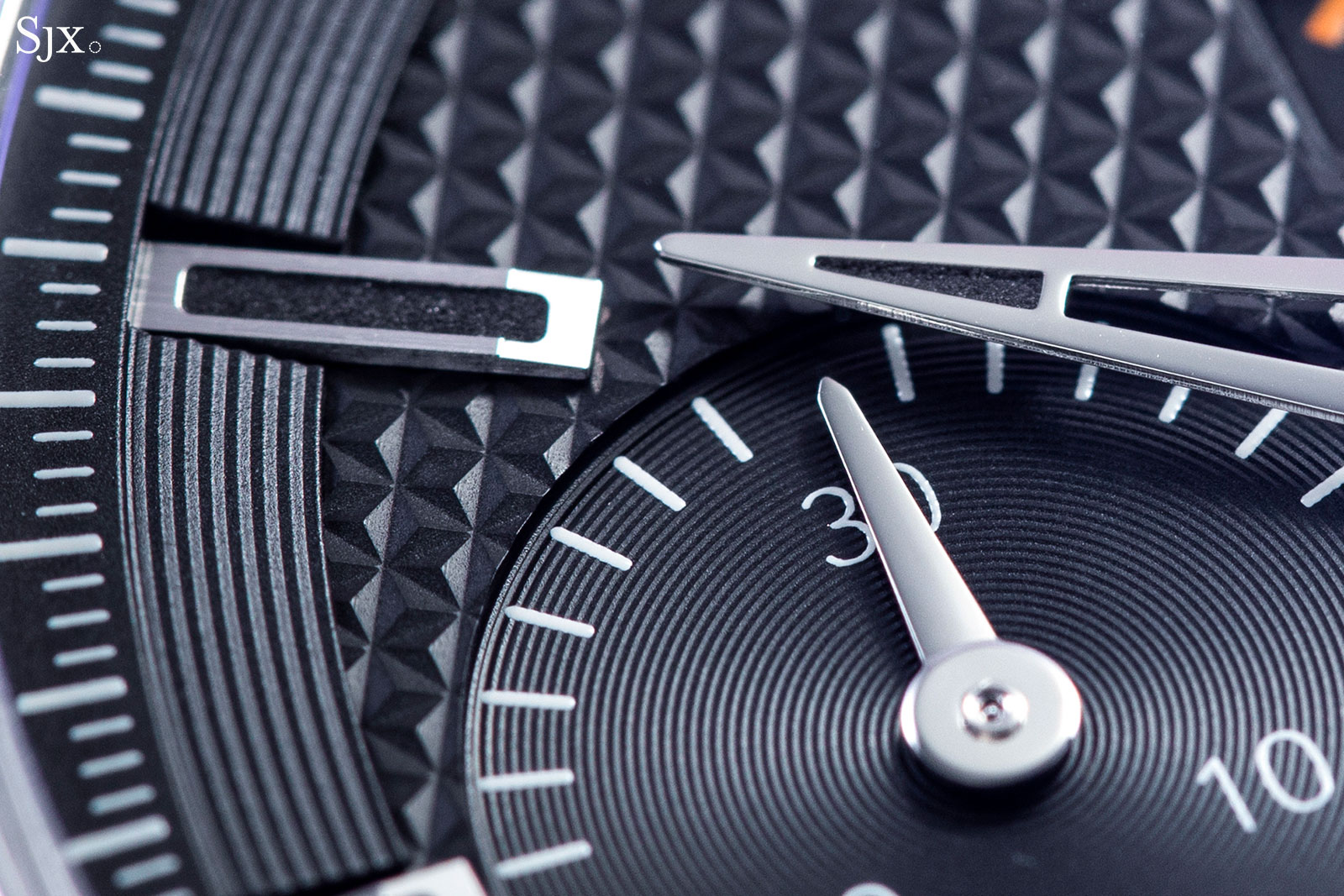 Legibility is also good, with a few caveats. The time is easy to read, as is the extra large date. In contrast, the month indicator is tiny, but not especially important so it’s not a functional flaw.

But both the hands and hour markers are filled with black Super-Luminova, which glows but barely. At the same time, the luminous tips of the hands are tiny. As a result, nighttime readability is so so at best. Conventional “lume” would have been more useful, and also more attractive in its colour contrast. 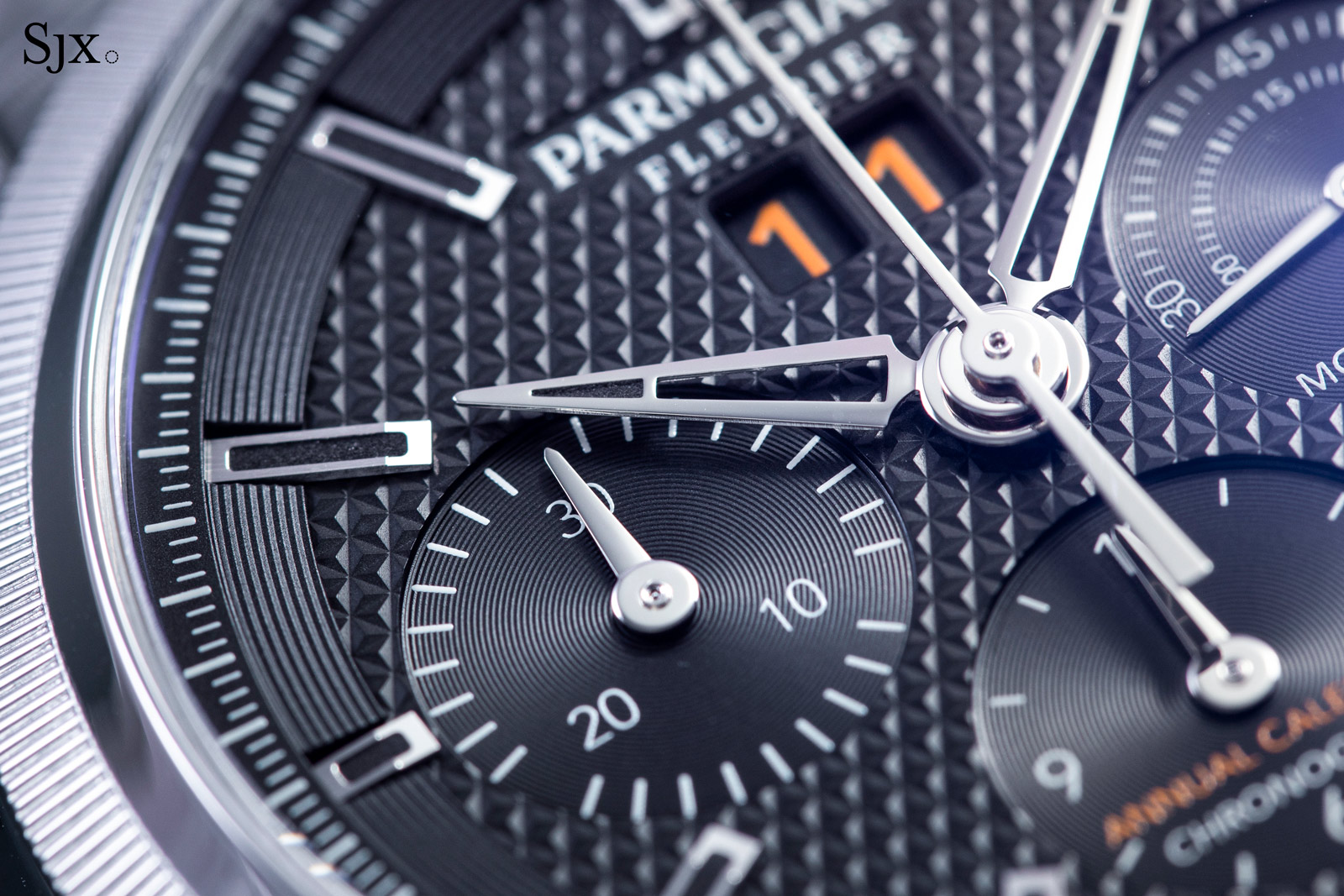 The use of black lume for aesthetic reasons illustrates one of the shortcomings of the dial – the design tries too hard.

The black lume is unnecessary and not very useful in form or function, and the same goes for the orange accents on the dial. Highlighting the calendar displays in orange – while broadcasting “ANNUAL CALENDAR” in the same colour – is similarly unnecessary. 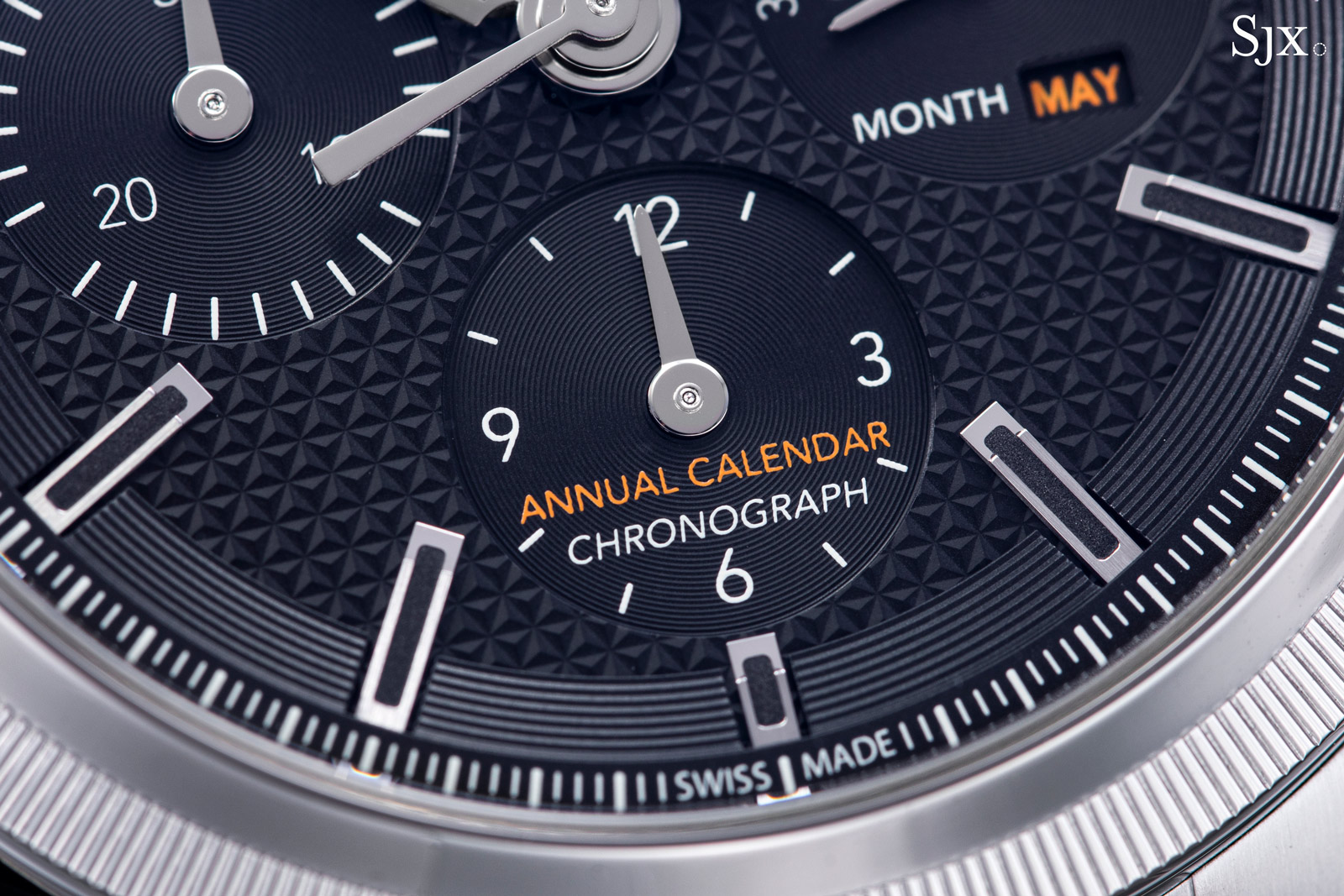 Proof that a cleaner dial looks better exists: Parmigiani recently followed up with the Tondagraph GT with a “panda” dial that’s been gently decluttered.

Still, more could be done. The Parmigiani logo under 12 o’clock could also do with being scaled down. Though the date is oversized, it feels small in comparison to the brand logo just above. 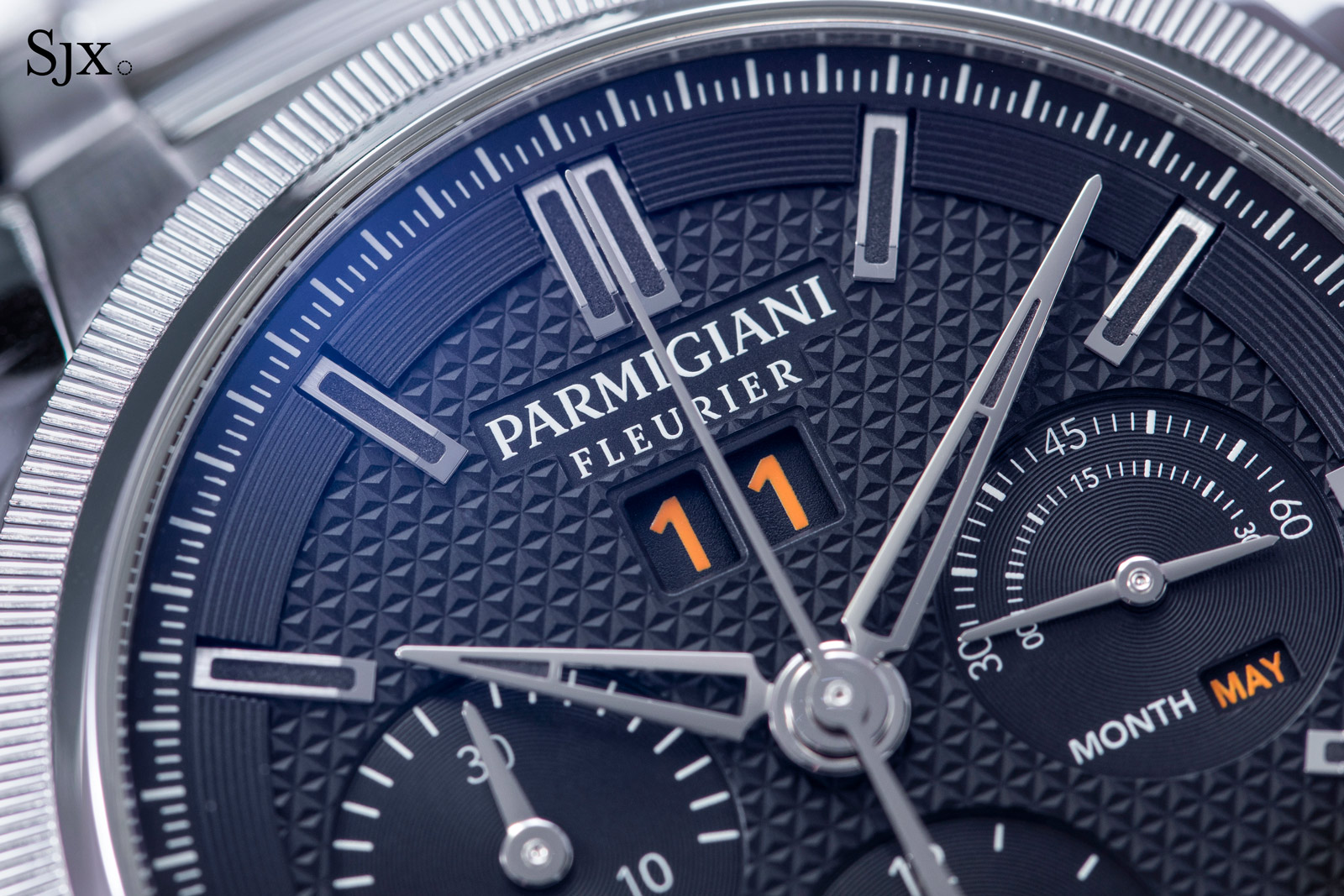 Another element that might work better with a redesign is the sloping flange around the dial that intersects with the minute track. While it provides depth to the dial, the flange breaks up the design and feels out of place. In fact, because its concentric fluting is perpendicular to the knurling on the bezel, and the contrast is jarring once you notice it. Within the Tondagraph GT is the PF043, a modular construction comprising a Vaucher cal. VMF 3002 along with a module on top for the chronograph and annual calendar.

Though the two complications combined is fairly uncommon, the module has been around for a long time. It’s found in a diversity of watches, including Maurice Lacroix (which installed it on an ETA 2892 base) and Richard Mille, which uses a near identical movement in the RM 11.

While modular movements are not considered as sophisticated as their integrated counterparts, the PF043 is good enough that it’s thoroughly respectable. Even though the under-dial mechanics are hidden, Parmigiani has a well-deserved reputation for good movements, and this will no doubt live up to that. 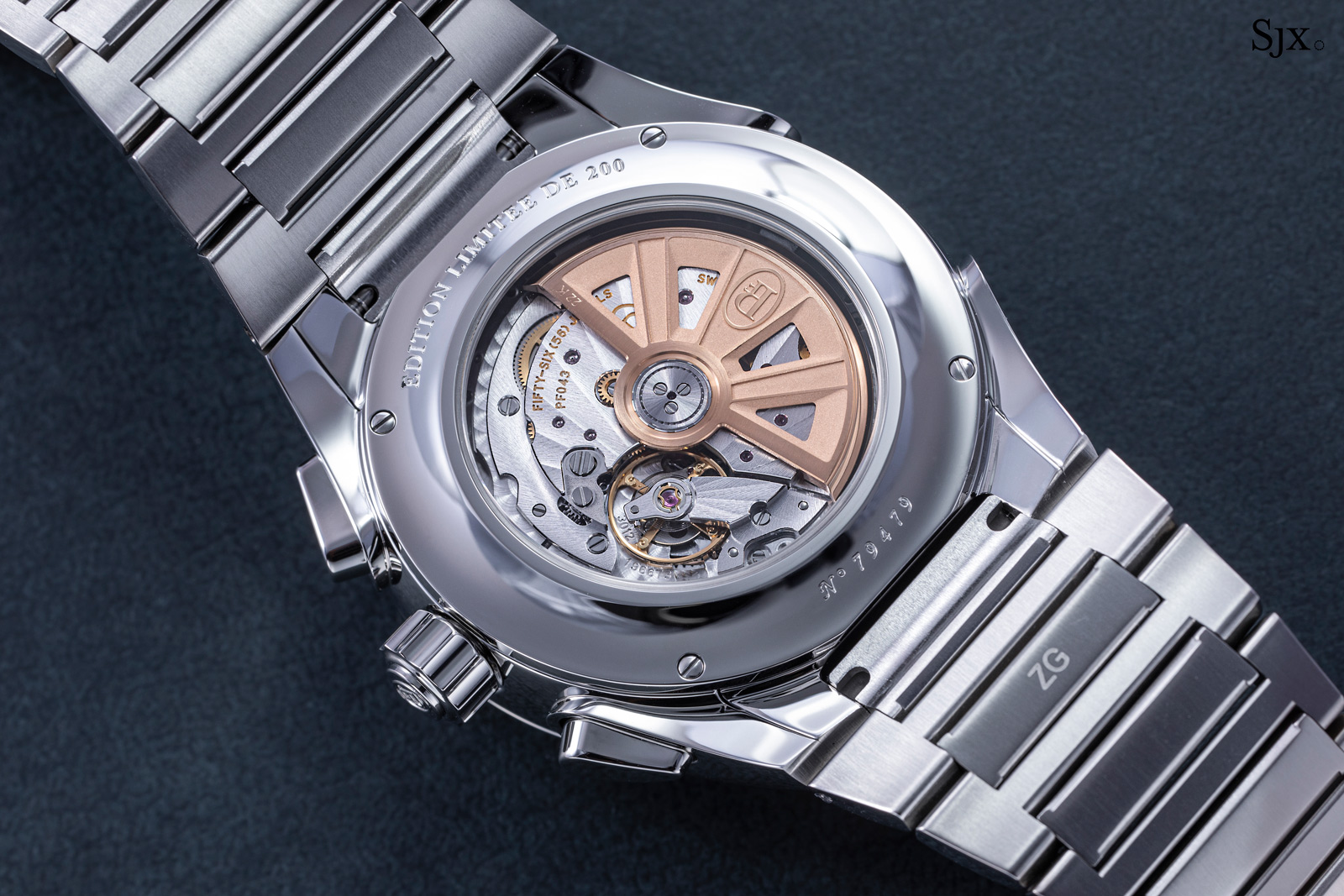 Even though the Tondagraph GT is entry-level as luxury-sports watches go, its movement has been dressed up. The most obvious luxe detail is the rotor, which is 22k red gold and decorated with brushed top surfaces and frosted recesses.

All movement parts are attractively finished in the industrial-decoration manner that typical of high-end movements produced on a large scale. The quality of decoration is similar to found on movements in entry-level Patek Philippe and Vacheron Constantin watches. 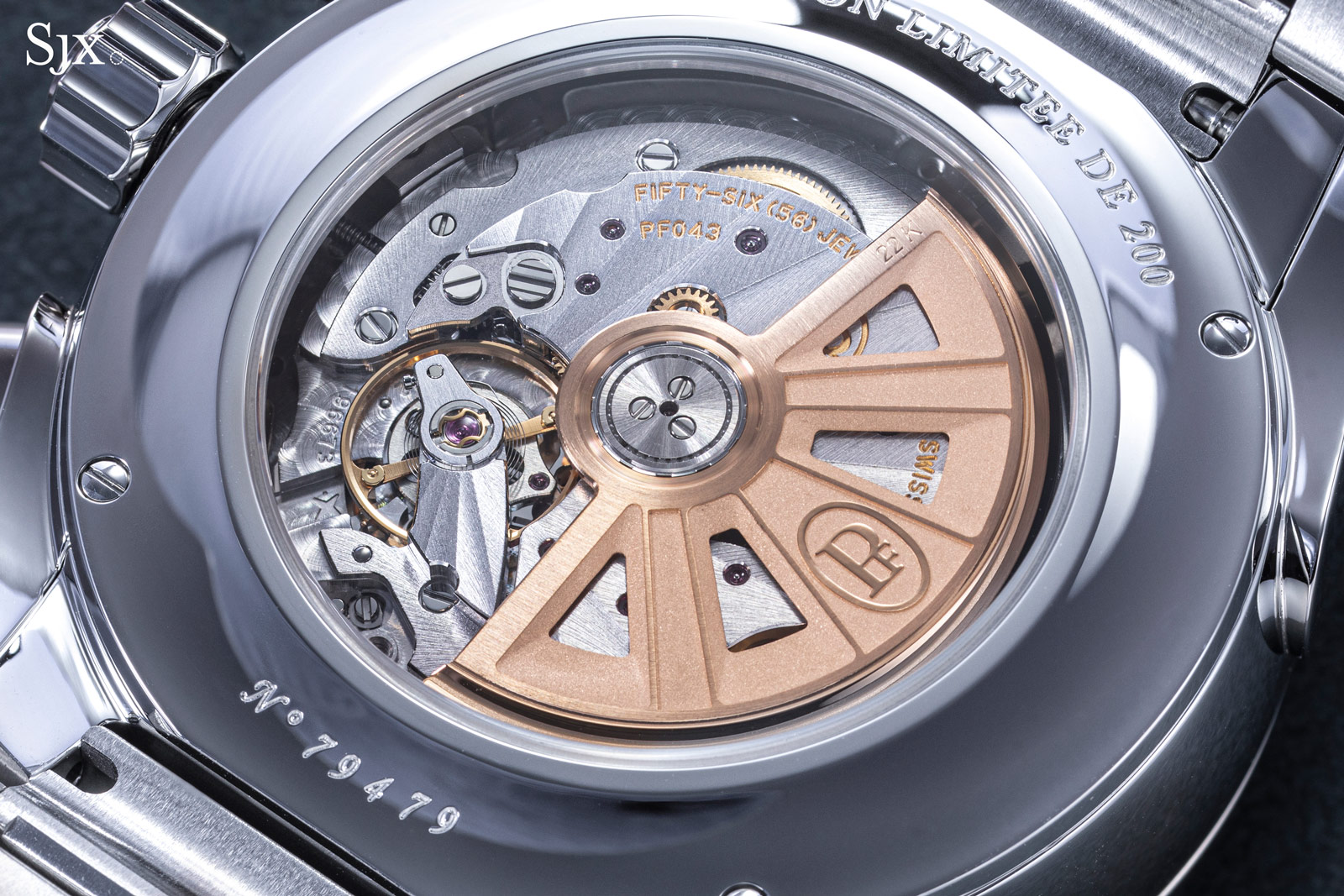 The movement bridges are finished in the usual Parmigiani style, with the key element being the radial striping emanating outwards from the balance cock Some details, however, stand out for being done better. While the narrower bevels on the inner edges still retain the machining marks from the milling process, the wider bevels on the outer edges are mirror finished, which means they were given a polish by hand after milling. 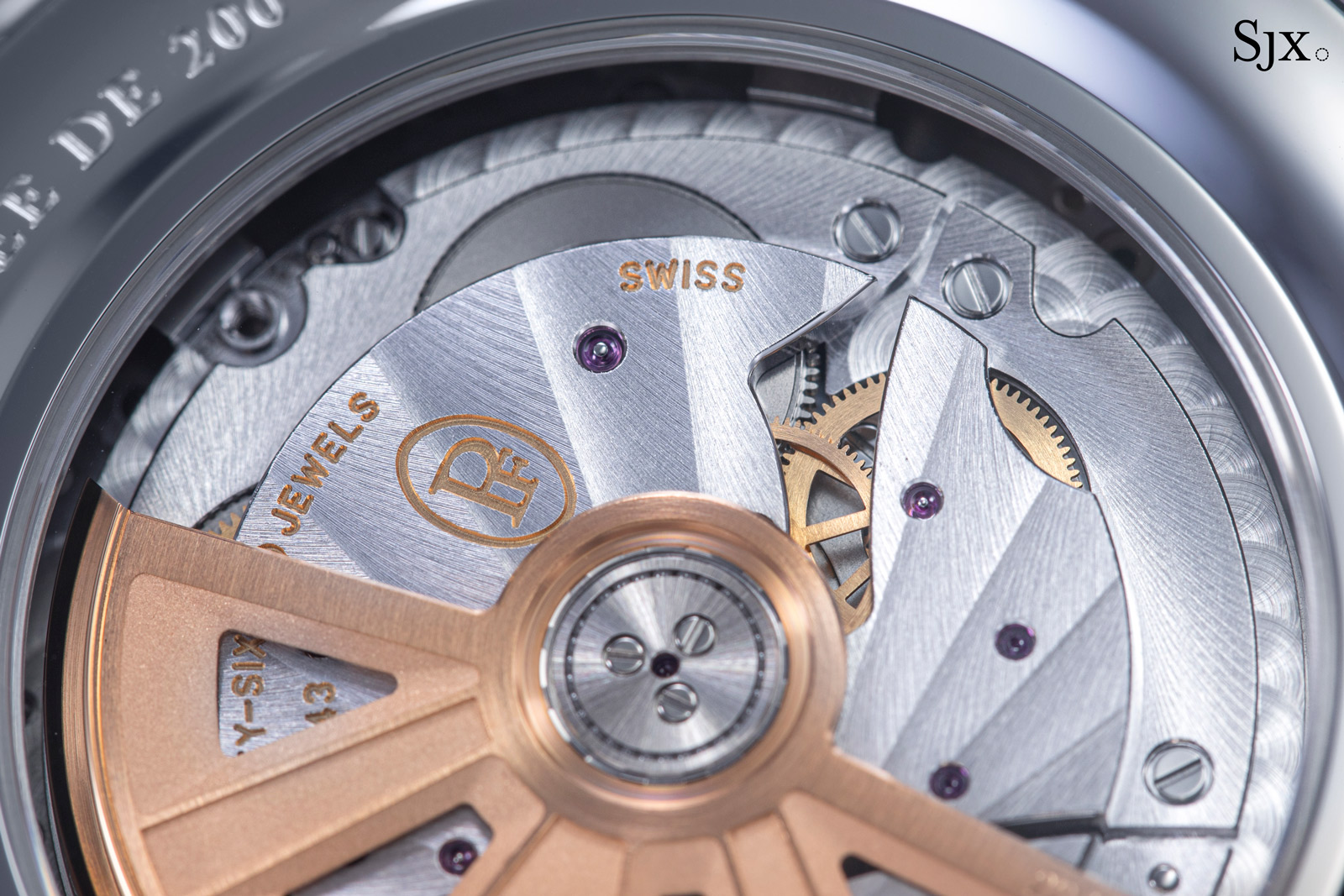 The Tondagraph GT is a surprisingly appealing and original design, despite being a round watch. That, and the quality of fit and finish, contribute to its appeal.

A couple of elements could, and should, be improved, like the dial design, but overall the Tondagraph GT is an excellent watch at its price.

Limited edition: 200
Availability: From Parmigiani and select boutiques worldwide
Price: Steel on rubber – US$18,500; steel on bracelet – US$$19,500