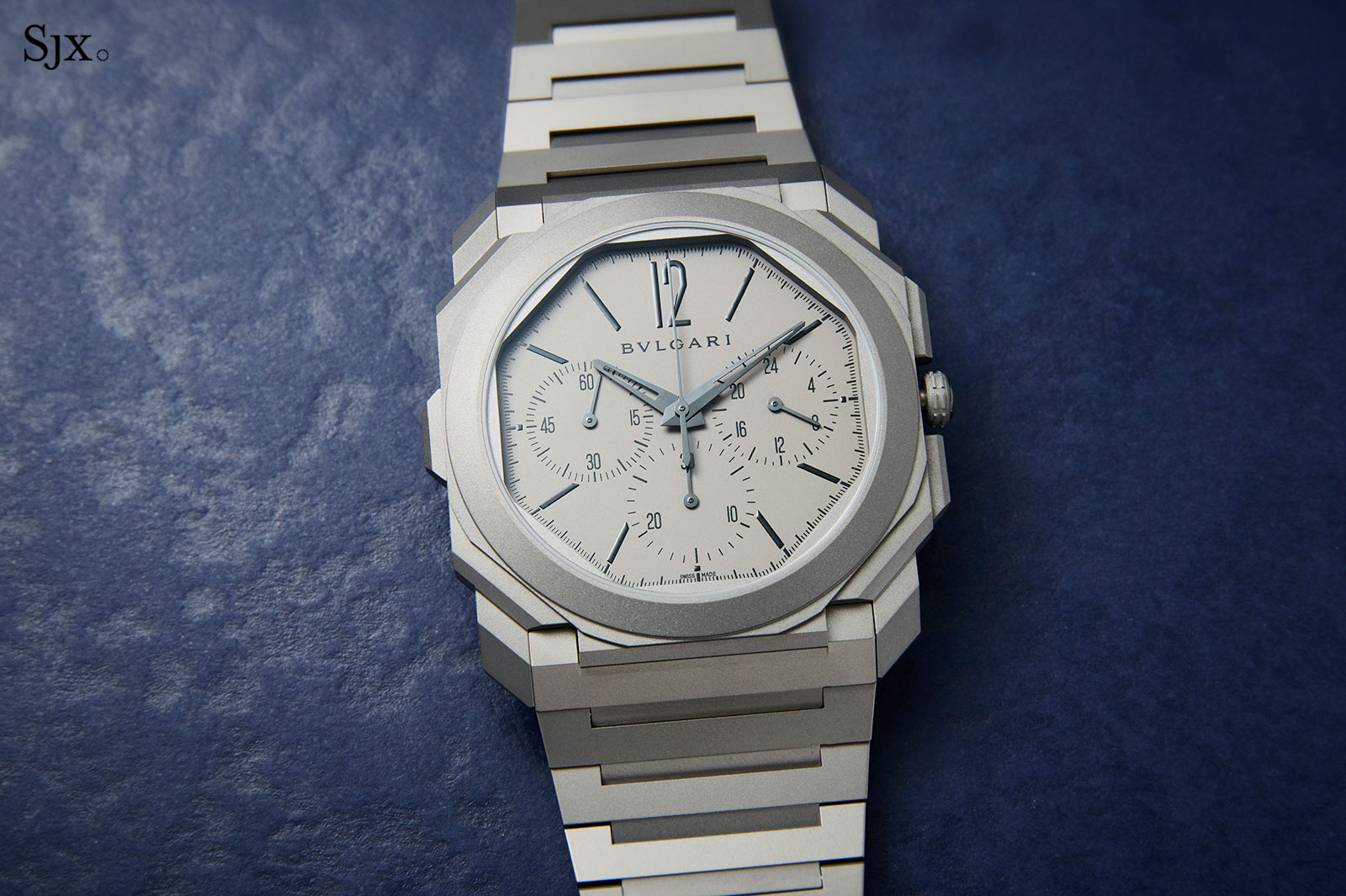 In the metal – despite there being relatively little of it – the watch is truly impressive, given the scarcity of super-slim chronographs on the market. Styled exactly like the other Octo Finissimo watches, the new chronograph has a 42mm case that’s just 6.9mm thick, making it one of the few chronographs that fit easily under the cuff, a point Bulgari chief executive Jean-Christophe Babin emphasised during the presentation.

The sandblasted finish of the dial, case and bracelet make for a clean, uniform aesthetic across the entire watch.

The watch is thin, lightweight and remarkably supple on the wrist, although it has a large footprint due to the diameter. Though it’s only 2mm larger than the time-only Octo Finissimo, the size is pronounced and it feels almost too big. Despite being a double complication, a chronograph with a second time zone, the dial remains straightforward and legible. Naturally it is not as minimalist like the time-only Octo Finissimo, but there is nothing superfluous on the dial.

That being said, a twin counter, or “bi-compax”, layout would have been more aesthetically pleasing. All the more so since a second time zone isn’t the most obvious complement to a chronograph, and appears to have been installed to balance the dial rather than for a utilitarian purpose. The chronograph is operated via the pushers on the right side of the case, while the local time hour hand (which is in the centre) is advanced in one-hour steps by the single pusher at nine o’clock. Home time is displayed in the sub-dial at three.

The movement relies on the same peripheral winding mechanism found in the BVL 288 tourbillon calibre from last year, and shares the same power reserve of 55 hours. Winding is accomplished with a narrow platinum ring that sits on the outer perimeter of the watch. Because the height of the movement was a crucial constraints, the chronograph uses a more traditional horizontal coupling instead of the vertical clutch that is currently fashionable.

Consequently, the movement is a relatively large 37.2mm wide, with everything inside laid out as flatly as possible, with minimum stacking. Far too often, watchmakers insist innovation comes at a cost. Most record-breaking, ultra-thin watches are produced in limited quantities at high prices, but Bulgari has essentially democratised such watches to an extent that the Octo Finissimo are almost the quintessential men’s Bulgari timepiece.