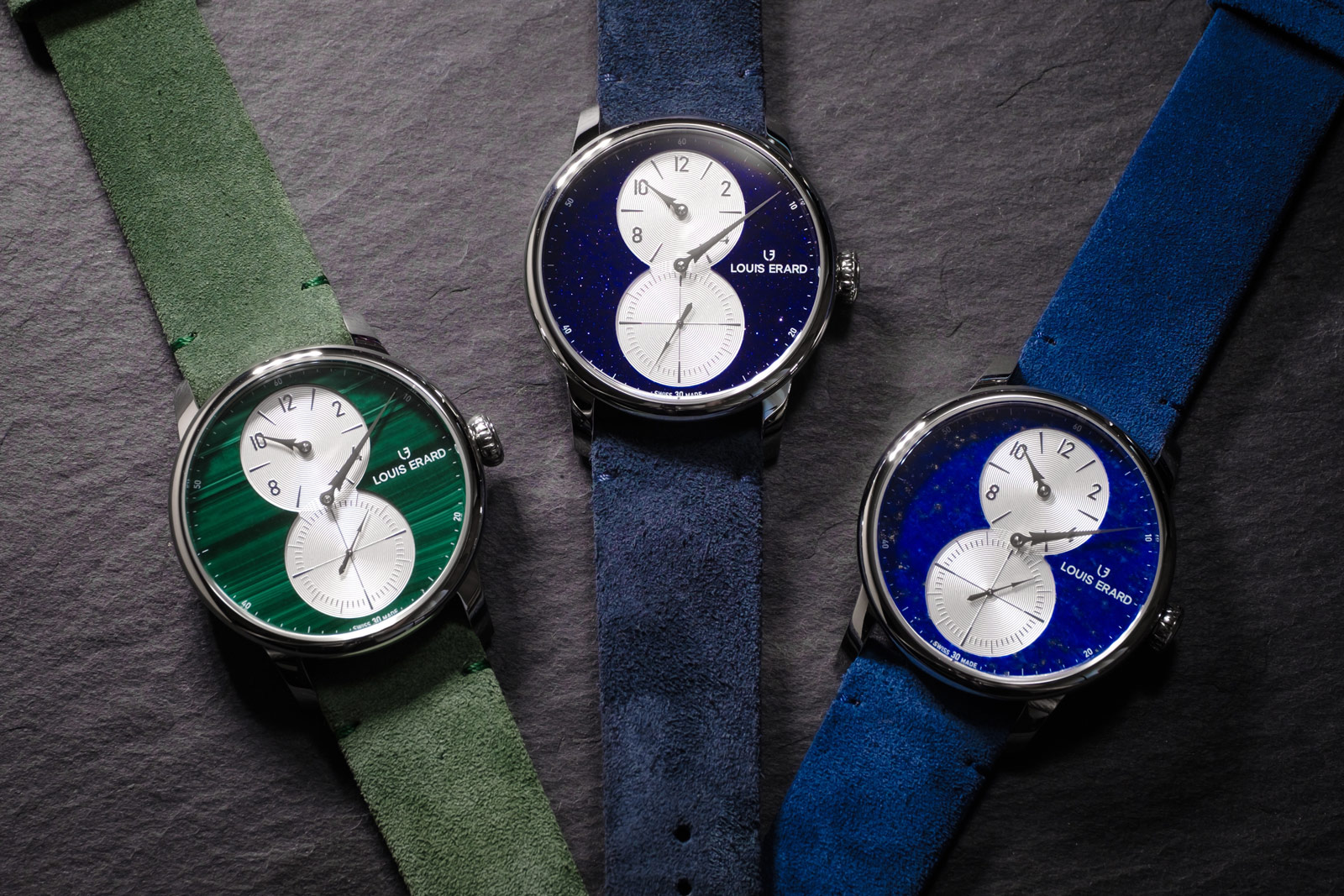 Louis Erard has embarked on a journey into the realm of special dials lately, starting with grand feu enamel and followed by hand-made guilloche – done affordably as is typical of the brand. And now Louis Erard is continuing apace with Excellence Régulateur featuring dials in lapis lazuli, malachite, or aventurine glass.

But this time, however, the special dials are different. Louis Erard has opted for its signature regulator-style display, instead of the time-only format used on earlier editions, adding more character to the exotic-material dials. 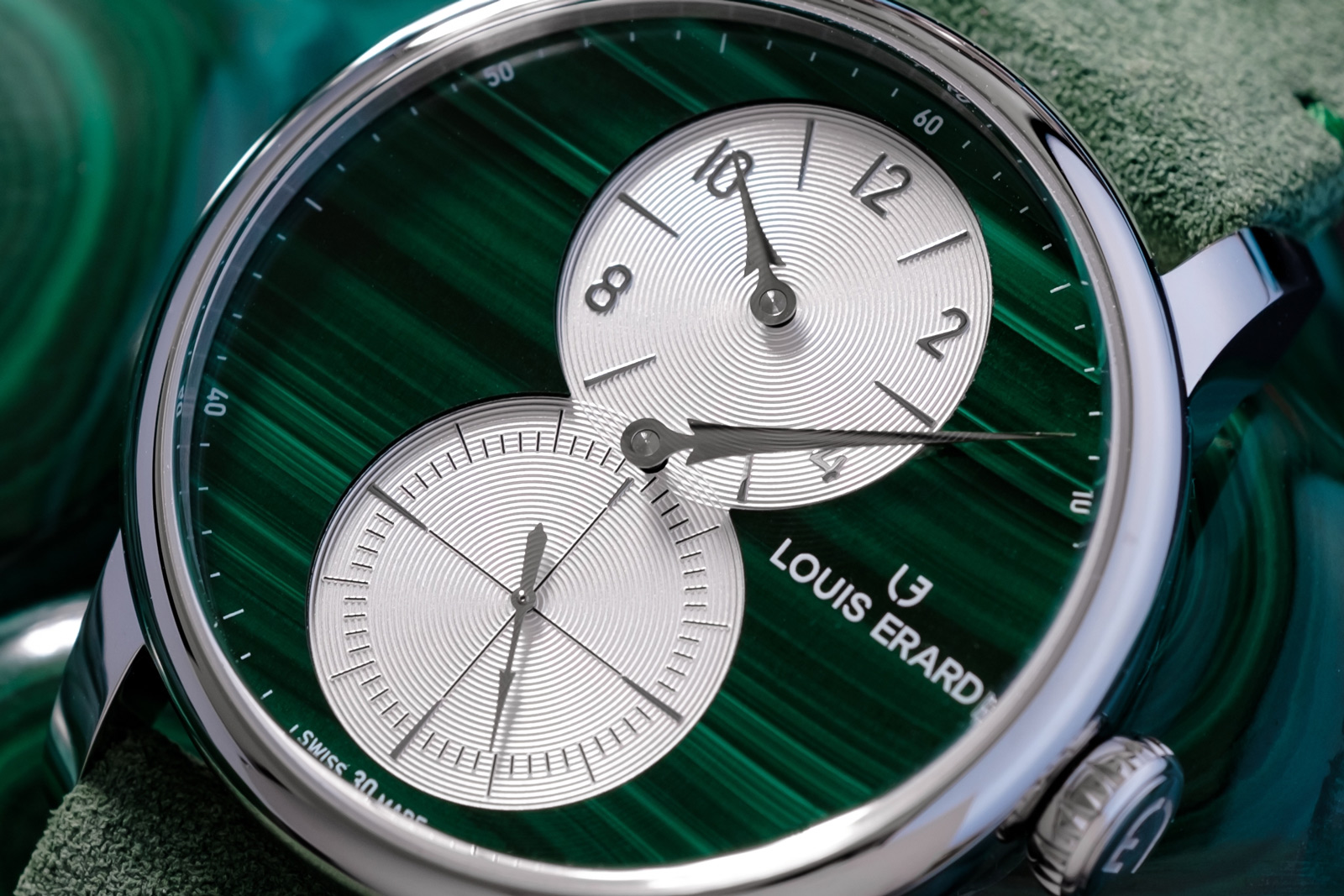 Regulators have long been a specialty of Louis Erard, and it’s a complication that’s uncommon this price point, especially a regulator with in-line hours, minutes, and seconds. The regulator watch has been the base for several interesting limited editions, especially the collabs with Alain Silberstein and Vianney Halter.

Despite not being a collab with a notable personality, the latest regularly is equally interesting, because the dial materials are typically found in watches at a much higher price point. Recent examples including the platinum Omega Seamaster 300 or even the multi-million dollar, piece unique Rolex Daytona in platinum. 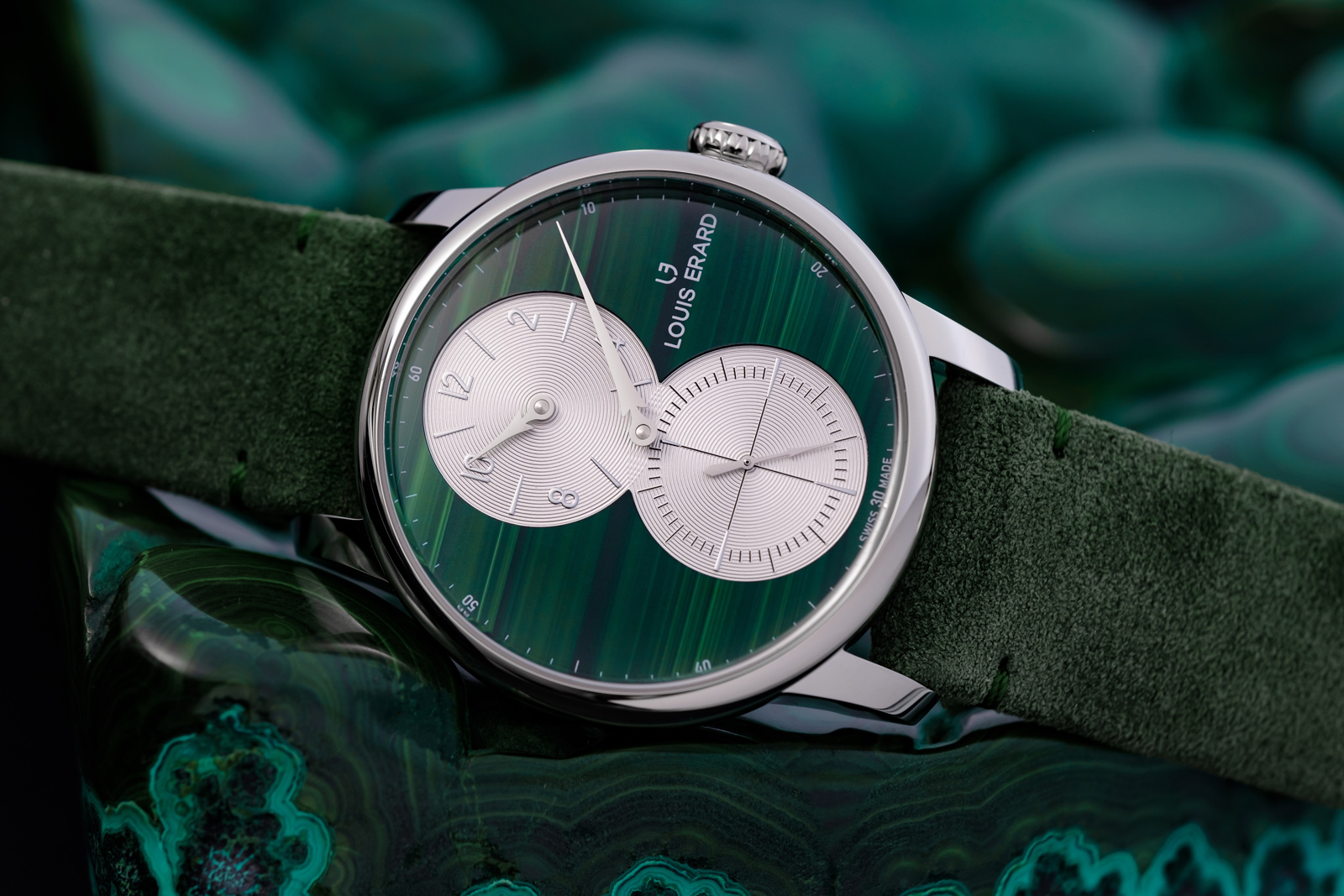 In contrast, the new regulator is relatively affordable at just under US$3,200. At the same time, the regulator also costs less than the earlier special editions, namely the models with guilloche or enamel dials, making it an even better value proposition.

Though priced lower, the new regulator still looks good, with Louis Erard having smartly focused on the dial, while leaving the rest of the watch relatively simple. Its sub-dials are recessed, concentrically grained, and topped with applied markers and delicately shaped, “fir tree” hands. 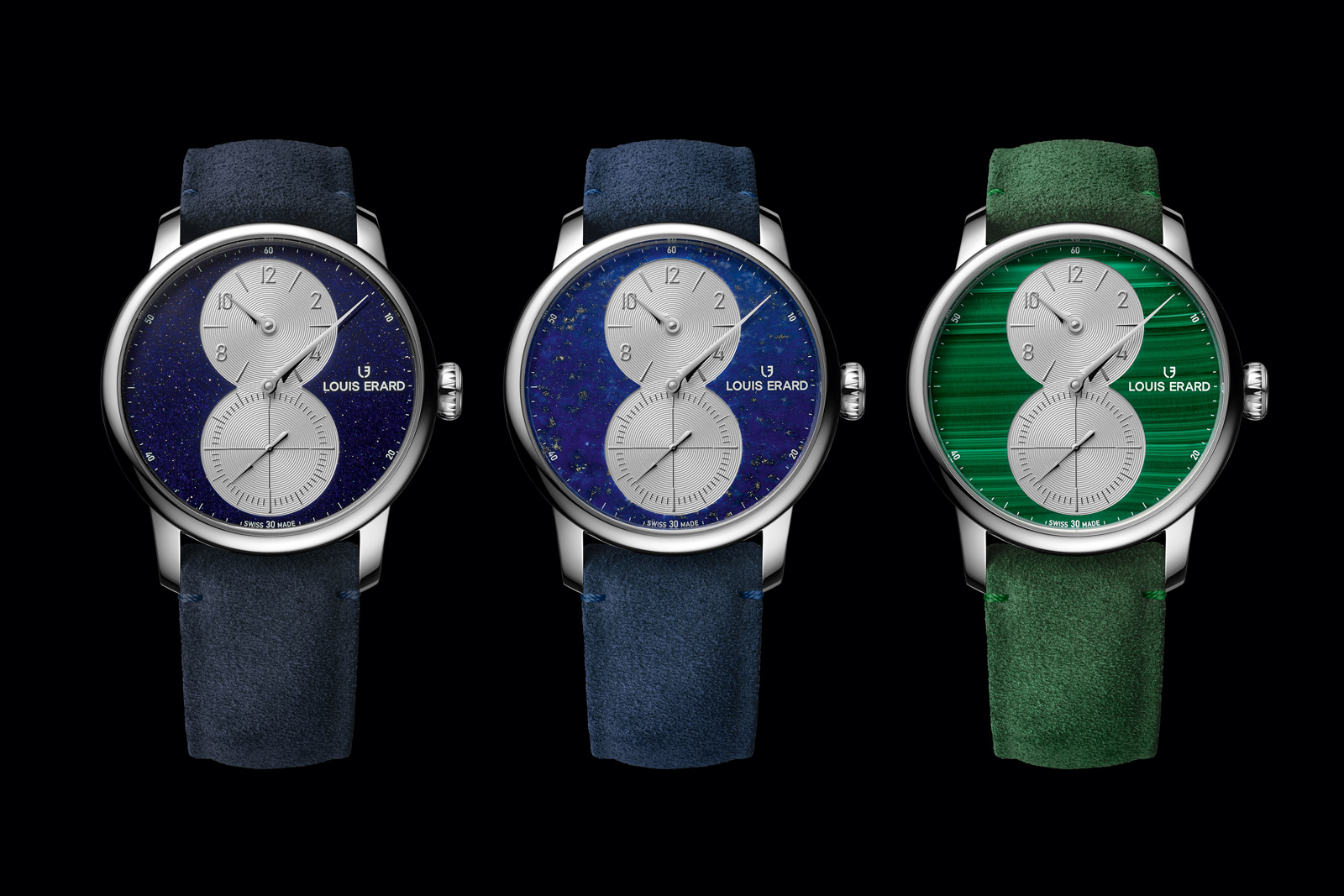 From left to right, aventurine glass, lapis lazuli, and malachite

Blues and a green

The regulator trio is made up of dials in blue and green – all colours that are currently fashionable, but executed with classical extravagance.

Set against the background of semiprecious stone or glass, the twin sub-dials form a figure-of-eight that indicates the hours on top and seconds below. The display is powered by the brand’s in-house module mounted onto a Sellita base movement. 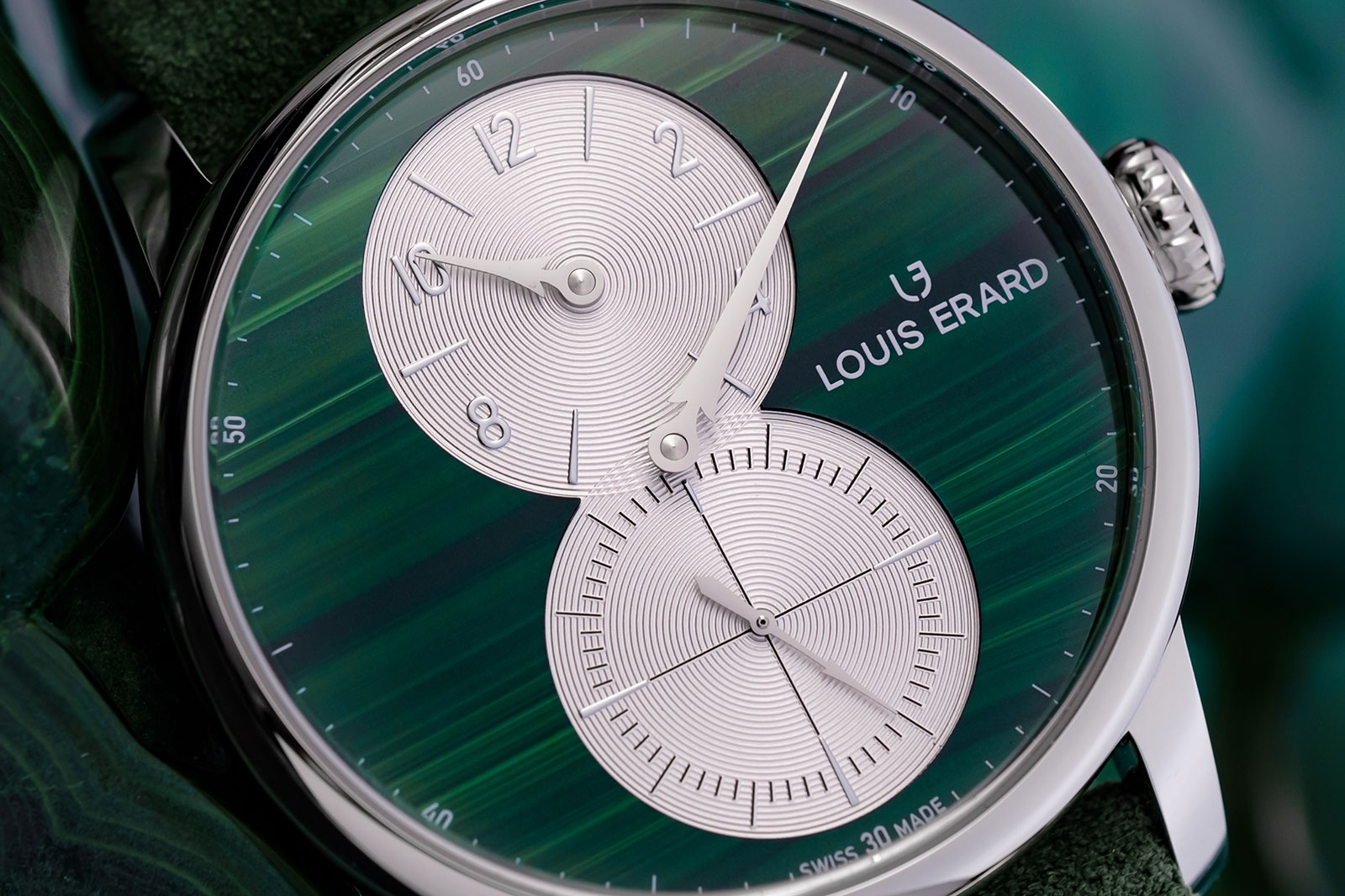 The module transforms a conventional, co-axial and central hand display into three separated hands that are arranged linearly and vertically, a feature originally found in regulator clocks that were used as reference timekeepers in watchmaking workshops and factories in the 18th and 19th century.

The most striking of the trio is the malachite dial model, which has a natural banded finish in a gradient of greens. 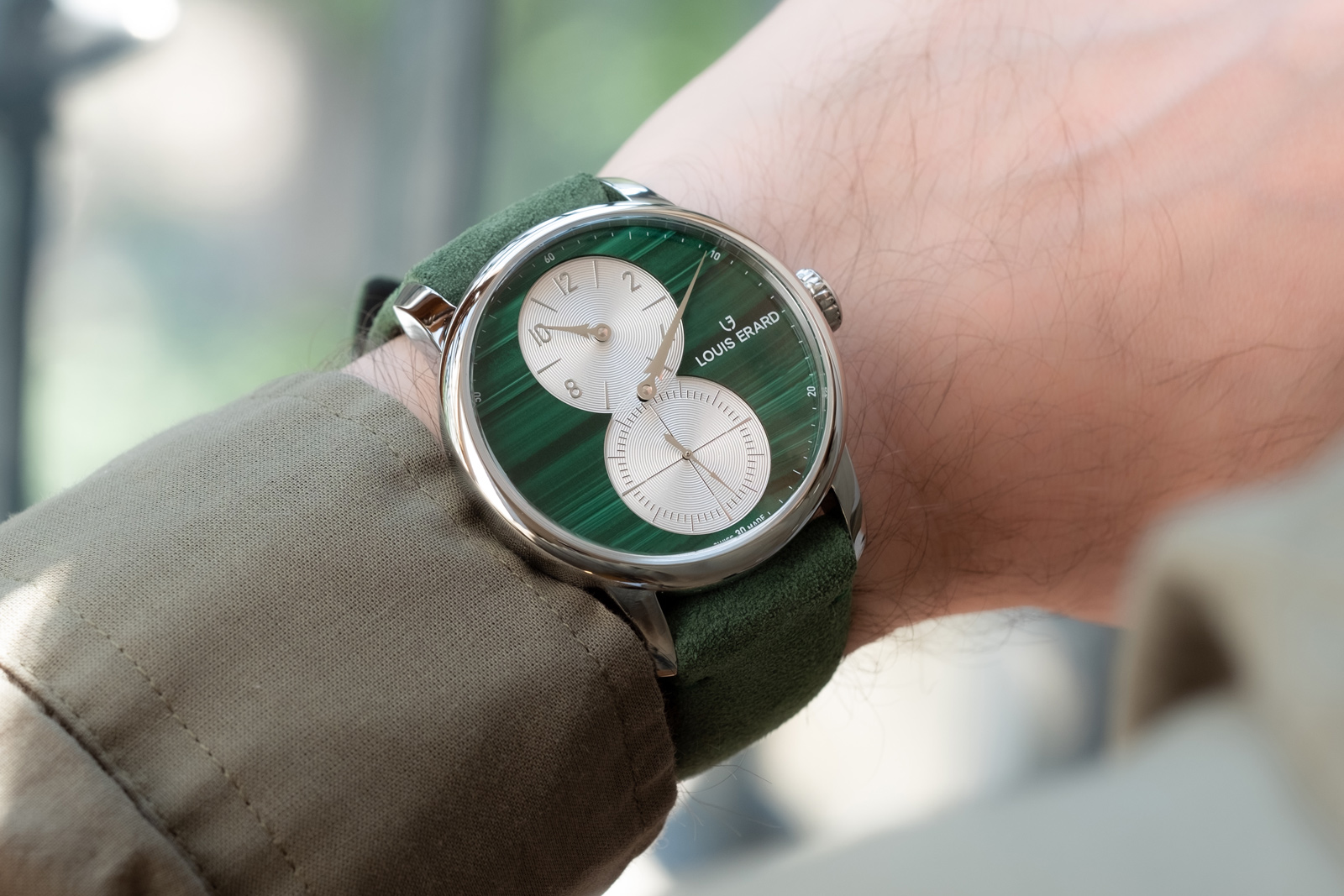 Between the pair of blue dials the lapis version stands out. It’s is made of a thin slice of blue rock with coppery metallic inclusions, giving it a slightly sparkly finish. 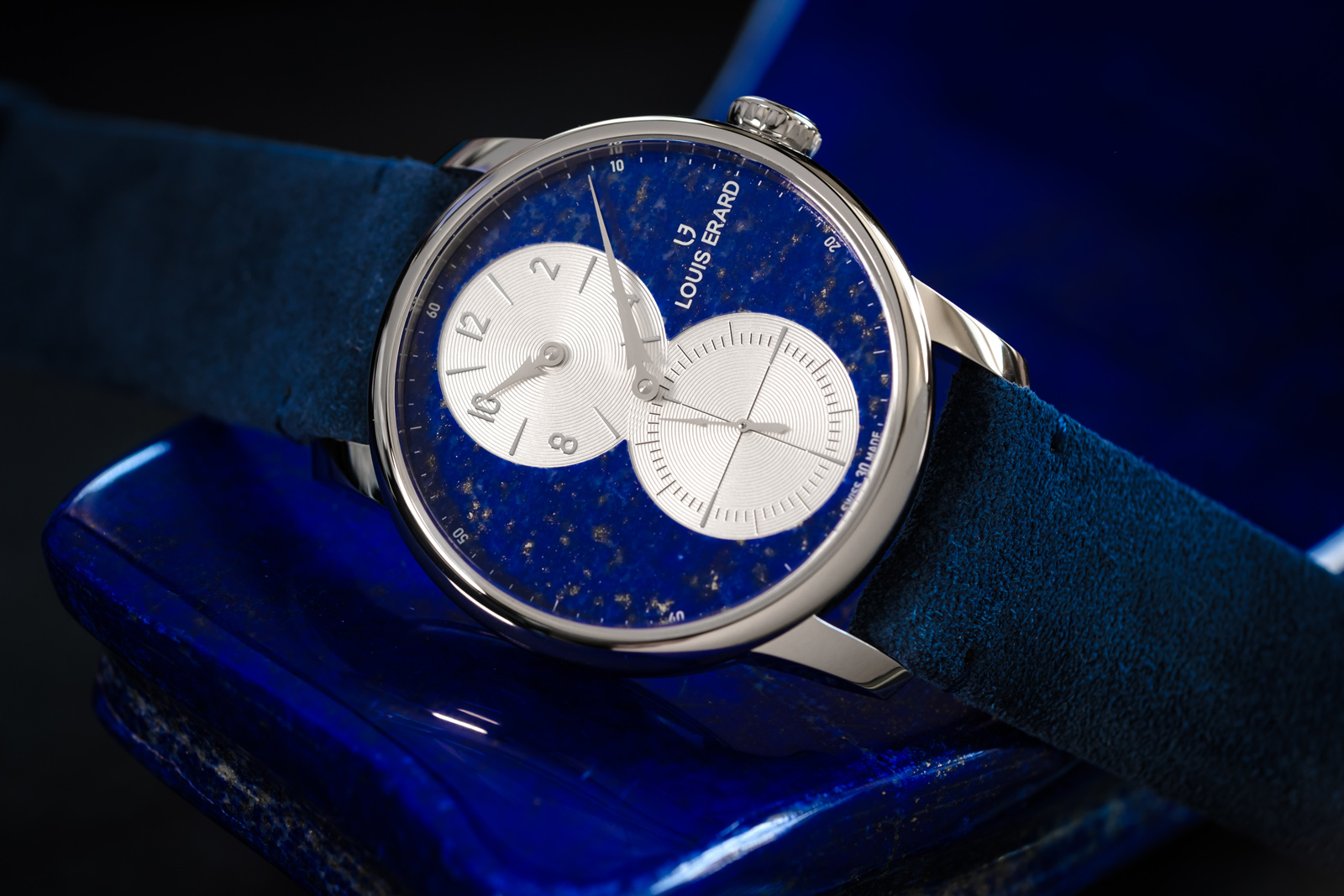 The other blue dial is even more sparkly, but it’s made of glass instead of natural stone. Aventurine is essentially glass that’s been mixed with tiny metallic flakes, giving it a speckled, starry effect. 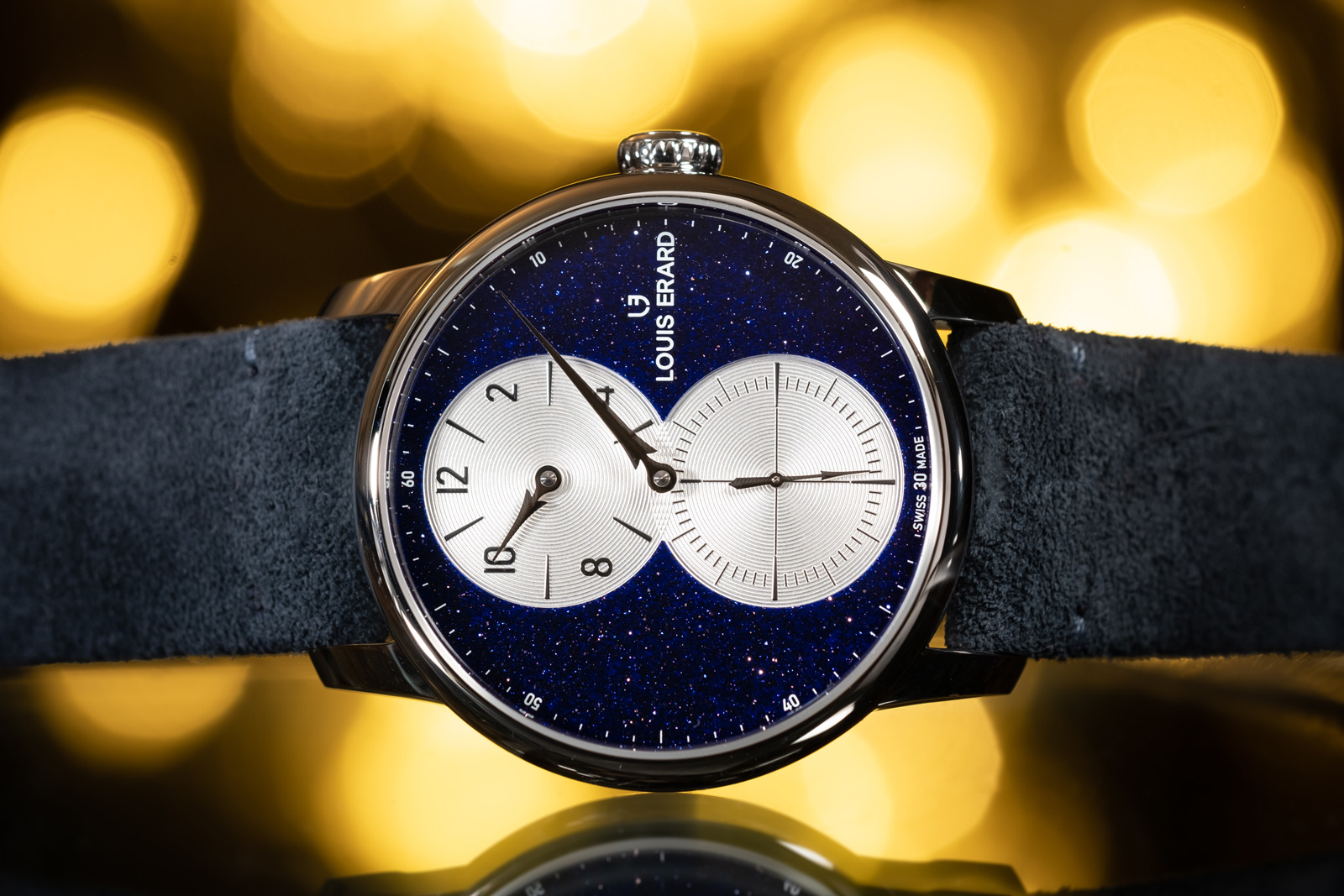 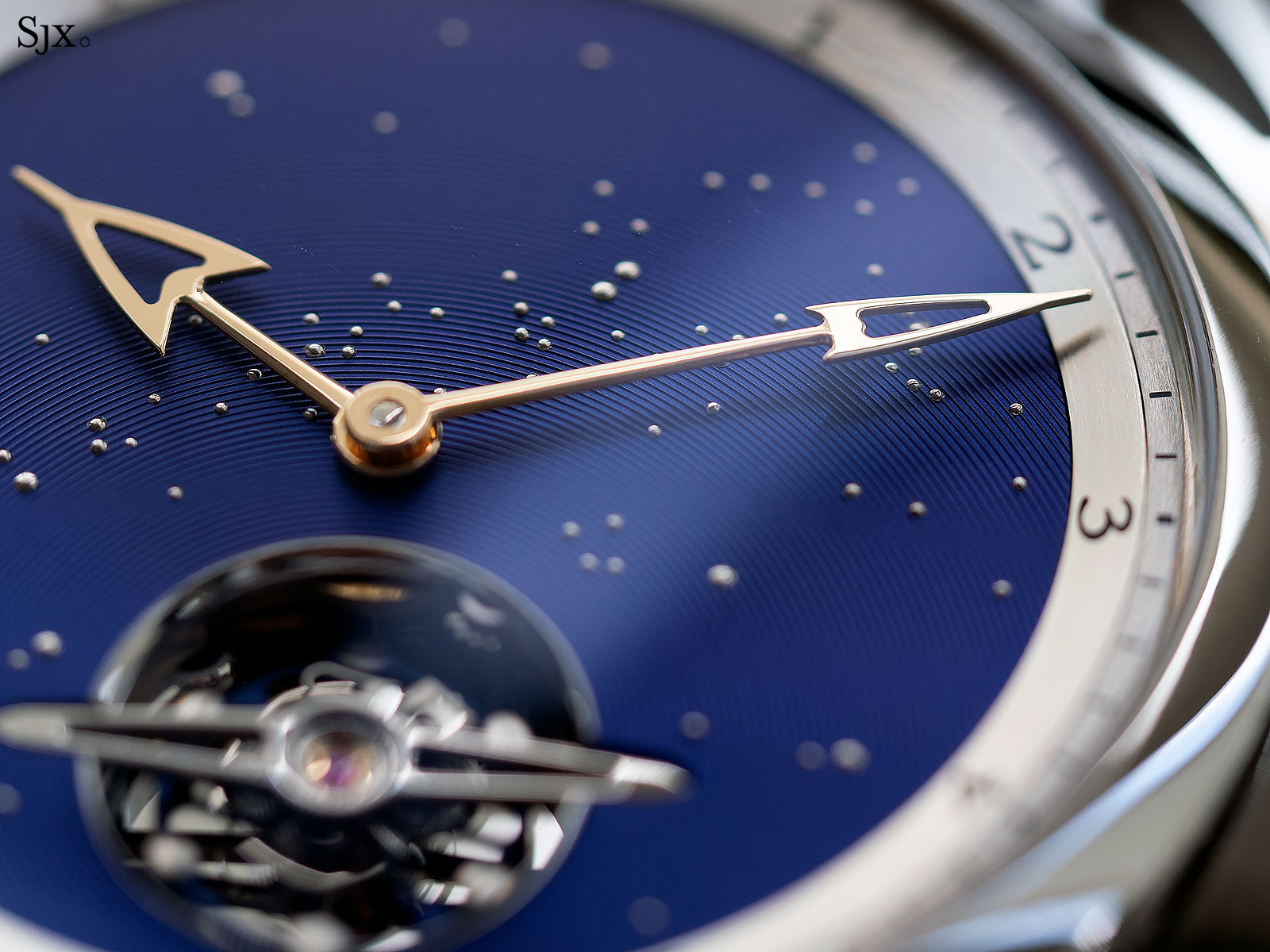 Watchbox, one of the world’s largest retailers of pre-owned watches, has just announced that it’s taken a majority stake in De Bethune, an independent watchmaker that’s recently enjoying a revival in its fortunes.

The deal closed on August 31, according to Patrik Hoffmann, the former chief executive of Ulysse Nardin who’s now the head of Watchbox Switzerland. According to Mr Hoffmann, De Bethune now has just four shareholders, down from a dozen or so previously, with Watchbox holding the largest stake.

While Watchbox now has board representation, its investment is largely passive says Mr Hoffmann. Both of De Bethune’s key men will remain in their equity stakes as well as management roles: Pierre Jacques as chief executive and cofounder Denis Flageollet as its technical and watchmaking head.

And Mr Hoffmann adds will be no change in terms of De Bethune’s products. “Denis sees the brand DNA so clearly,” continues Mr Hoffmann, “So it would be a big mistake to change that… [since] few brands have the same clearly-defined DNA.”

As the saying goes, history doesn’t repeat itself, but it rhymes. De Bethune was originally cofounded in 2002 by a vintage watch dealer active in the late 20th century, Davide Zanetta, a truly original character who was legendary in his time. Mr Zanetta sold his majority share of the brand in 2017 after many years of losses.

One of the investors who bought into the brand in 2017 was Steven Rostovsky, a pre-owned watch retailer based in California, who retained his stake and is the fourth shareholder after Watchbox and Messrs Flageollet and Jacques. 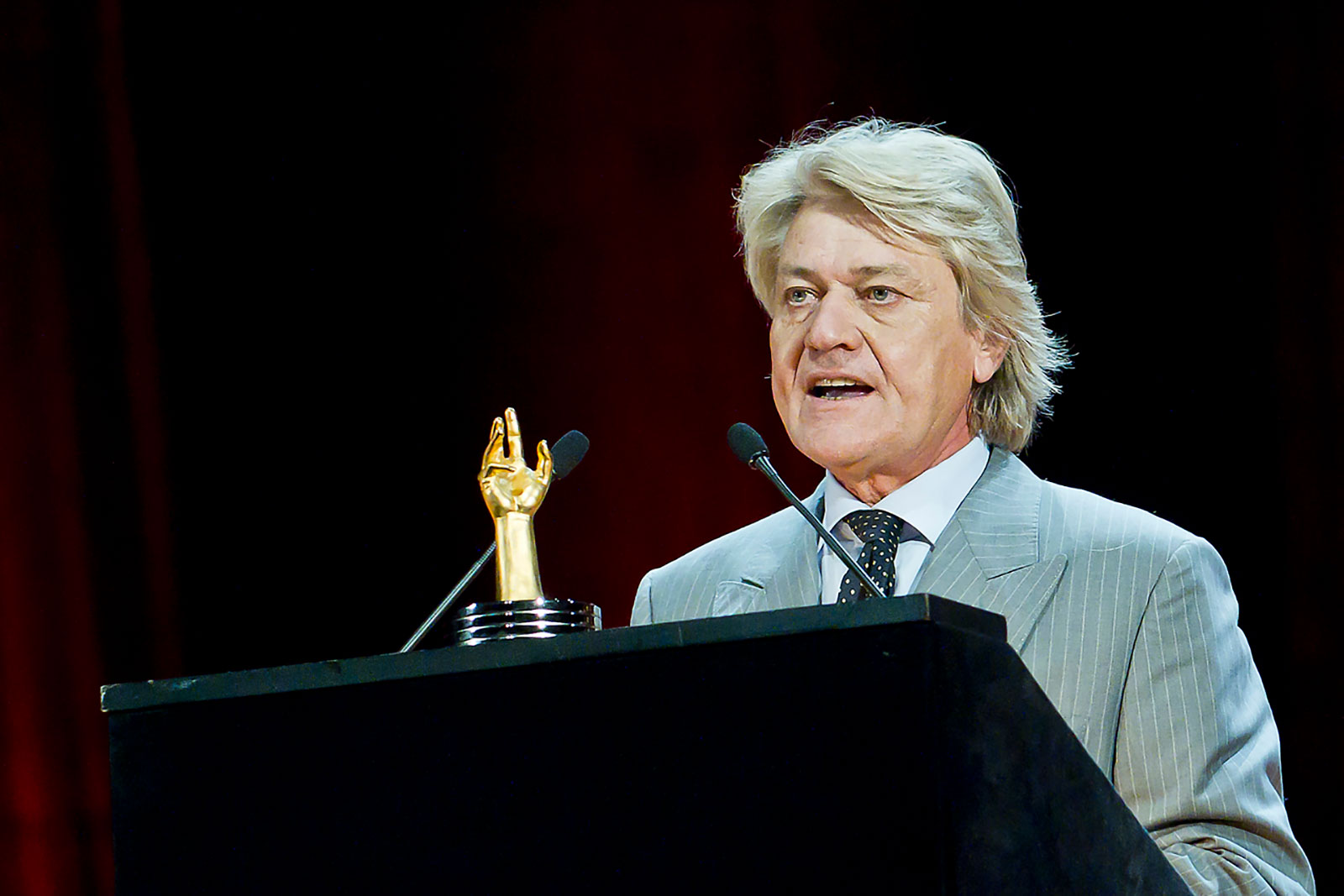 While De Bethune was on the ropes financially for most of Mr Zanetta’s tenure at the company, a recent spike in interest in high-end independent watchmakers like De Bethune has turned around its fortunes. According to Mr Hoffmann, De Bethune has been profitable since the 2017 change in ownership and he expects that to continue. From a historical average of about 150 watches a year, Mr Hoffmann expects De Bethune’s output to inch up slightly to 200 watches in 2021.

He adds that the watches De Bethune produces are mainly sold by third-party retailers, which will remain the key channel for the brand in the future. “As long as retailers invest in the brand, they will be allocated [watches]”, explains Mr Hoffmann, who adds, “The retail channel is very important and De Bethune will continue to depend on its retailers.” 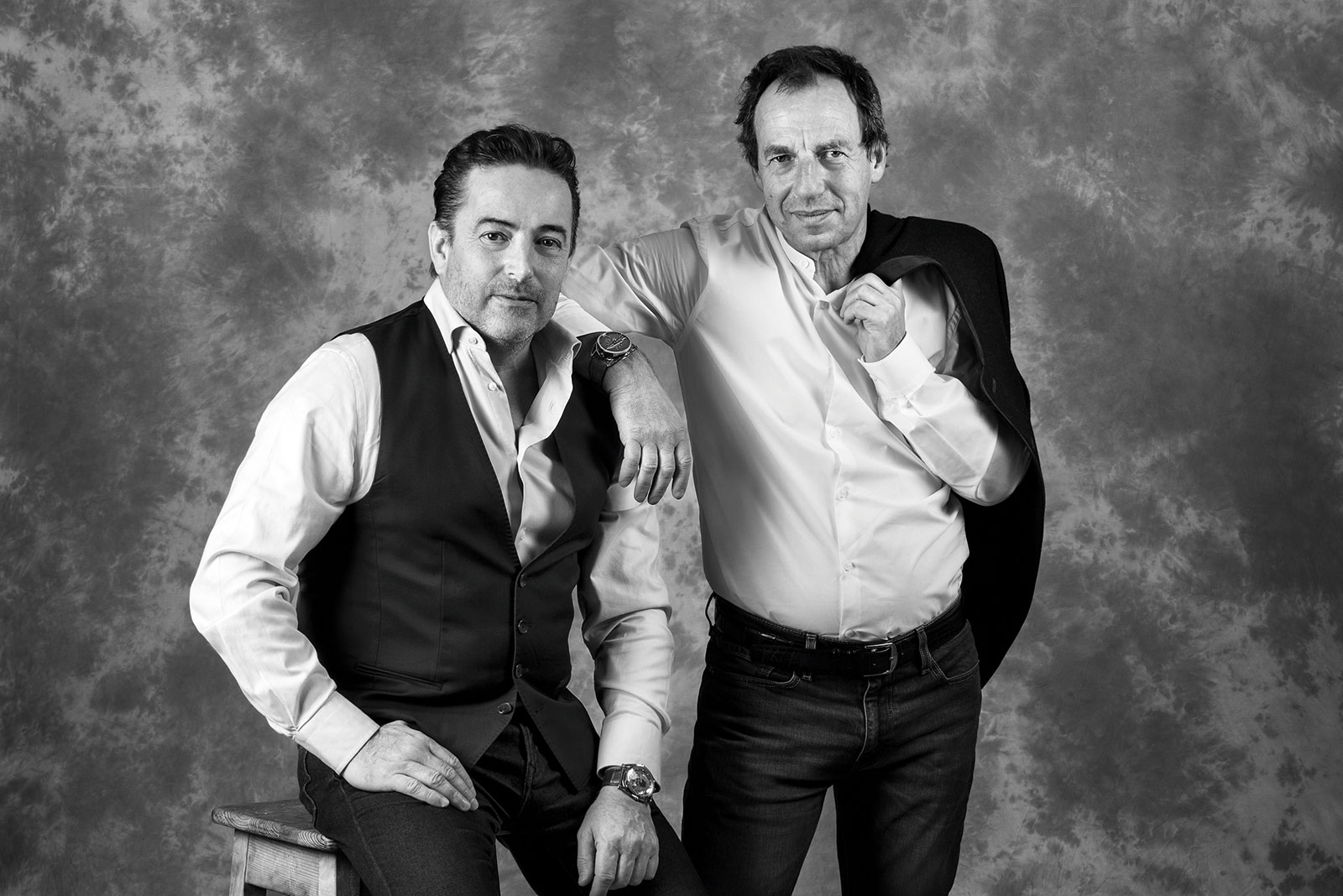 Based in Philadelphia but present internationally – it has outposts in Dubai and Hong Kong – Watchbox is a giant of its industry, with annual revenue of about US$300 million. The company was founded in 2017 as a spin-off of Govberg Jewelers, a traditional authorised retailer of brands like Rolex and Patek Philippe.

In contrast to many of its peers who have long focused on more mainstream names, Watchbox has long been active in selling pre-owned timepieces from independent watchmakers. Notably, Watchbox became a market maker for F.P. Journe starting about five year ago by actively buying and selling the brand’s watches.

Watchbox has financial heft – the company has raised several hundred million dollars from investors in the last couple of years, starting with US$100 million from private equity outfit CMIA in 2017 – which should put De Bethune on the soundest financial footing since its founding.

And will Watchbox be putting some of those millions to work at another independent watchmaker? Mr Hoffmann is coy about the future, saying, “Let’s put it this way, this is the first one and there is nothing else in the works, but it’s always good to say never say never.”