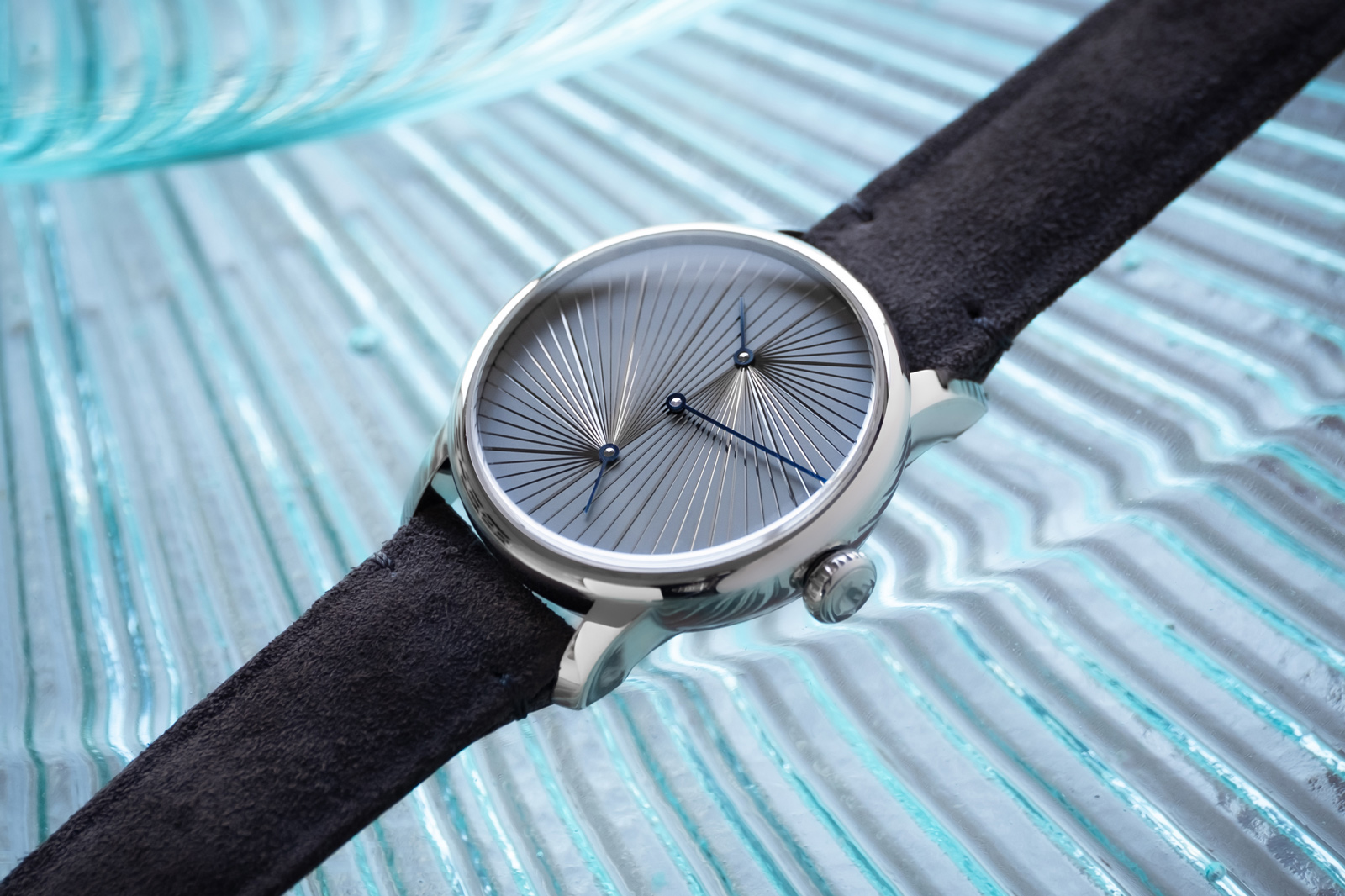 Since recruiting Manuel Emch, best known as the former chief executive of Jaquet Droz, to advise on strategy and design, Louis Erard has rolled out interesting collaboration watches at a steady pace. To date, the brand has worked with Alain Silberstein and also Vianney Halter, both of whom added their idiosyncratic flair to the brand’s trademark regulator wristwatch.

Now Louis Erard has just unveiled its fourth collaborative edition, the Le Régulateur x atelier oï. This time, however, the brand looked outside the watch industry for aesthetic direction. Founded in 1991, Atelier Oï is a design studio with a diverse repertoire ranging from furniture for Louis Vuitton to perfume bottles for Bulgari. The new regulator is the first wristwatch penned by Atelier Oï. 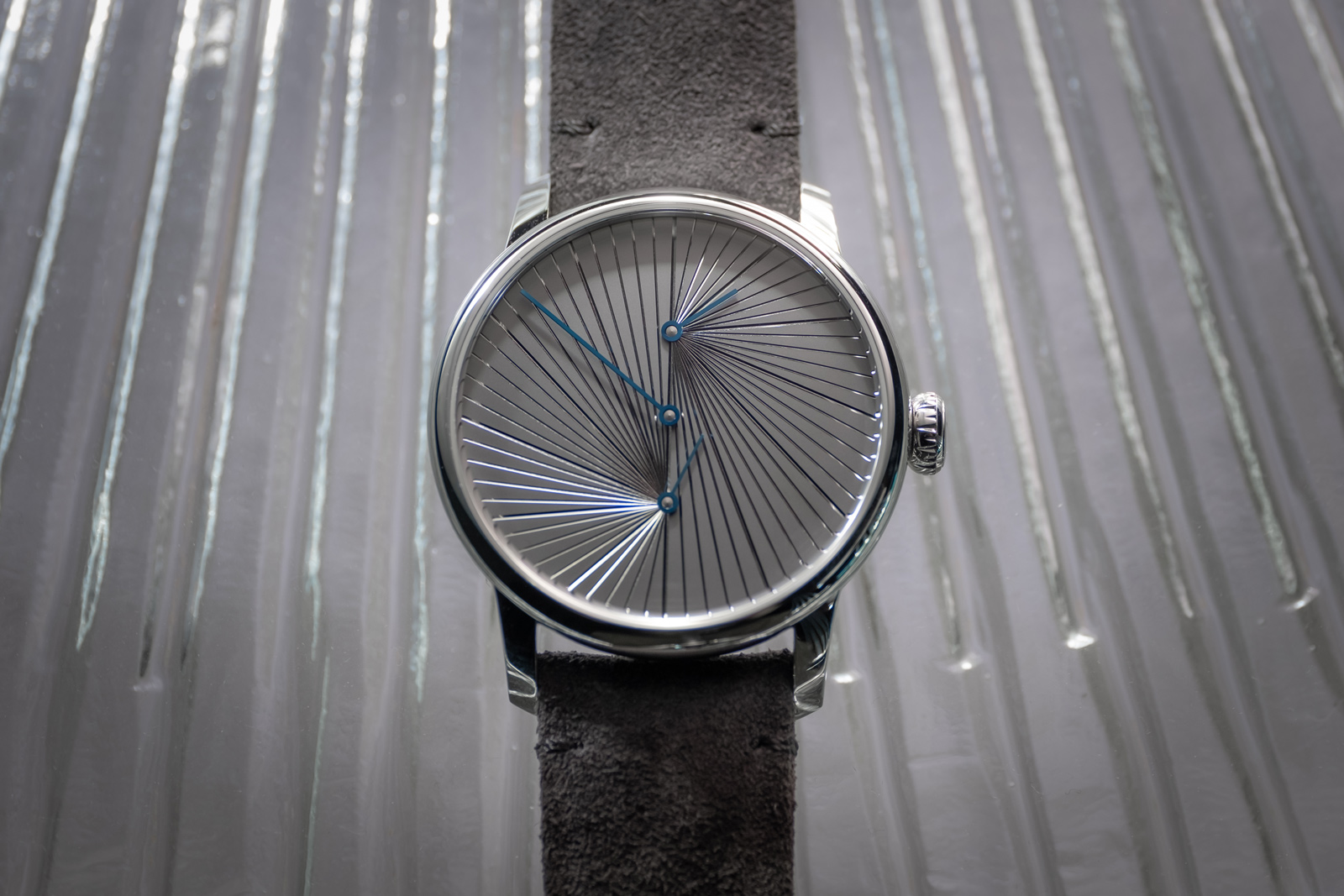 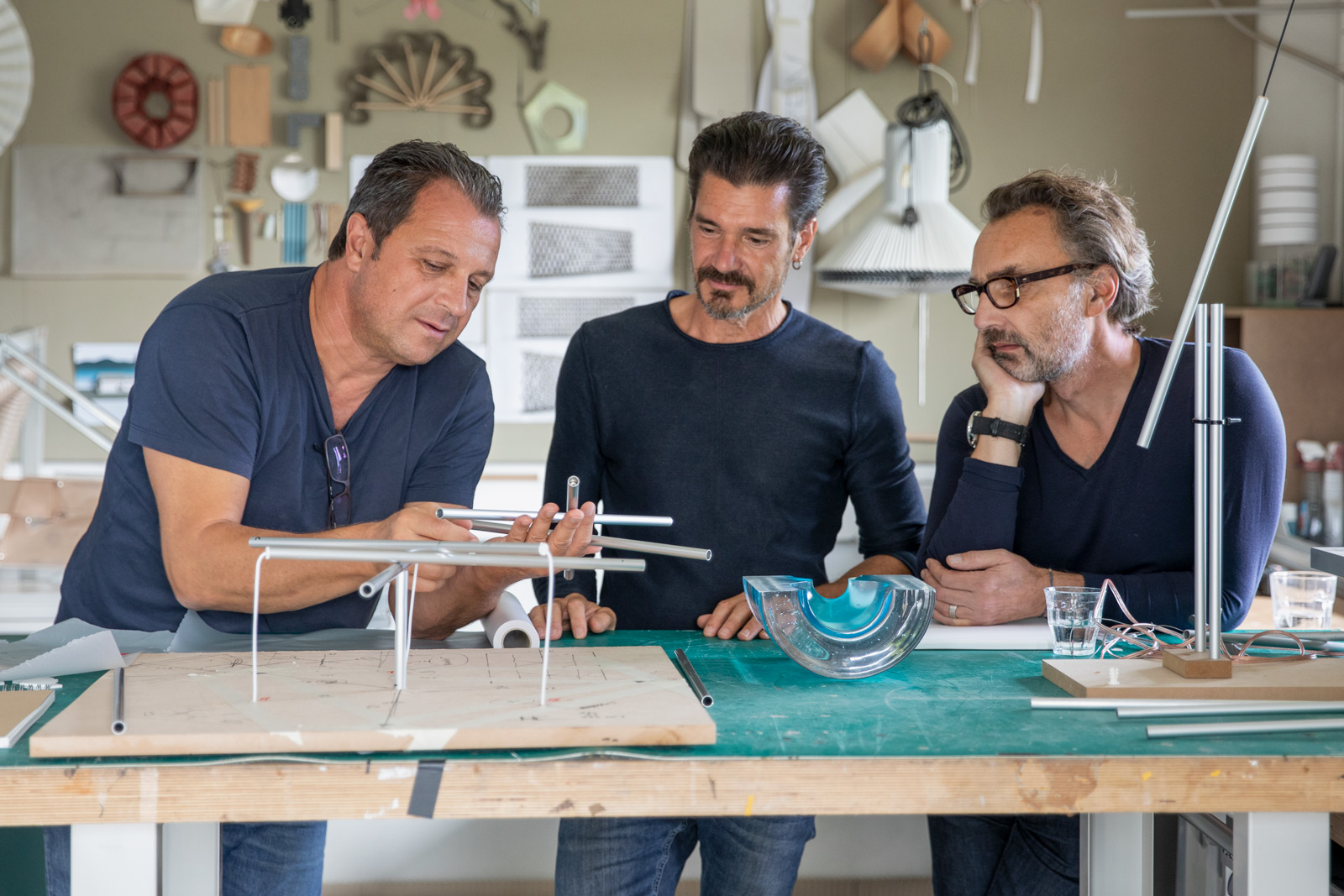 Like the earlier collaborative editions, the Le Régulateur x atelier oï is all about design – essentially a new dial to go with the standard case and movement. Strikingly distinctive, the latest regulator is radically minimalist, with the dial doing away with all scales, indices, and branding.

The dial markings consist only of straight lines arranged in a radiating spiral that create a hypnotic pattern. At the same time, the radial nature of the lines give the dial an expansive feel. Add to that the industrial, monochromatic finish and the effect is magnificent, evoking the fan-like structures found on cable-stayed bridges.

Interestingly, the Le Régulateur calls to mind the work of another designer, the Bulgari Octo Finissimo designed by Japanese architect Tadao Ando. Both designs rely on pure geometry for visual effect. While the approaches are tangibly different – concentric circles versus radial lines – the results are similar with an appealing look that brings to mind the raw concrete and clean lines of Brutalist architecture. 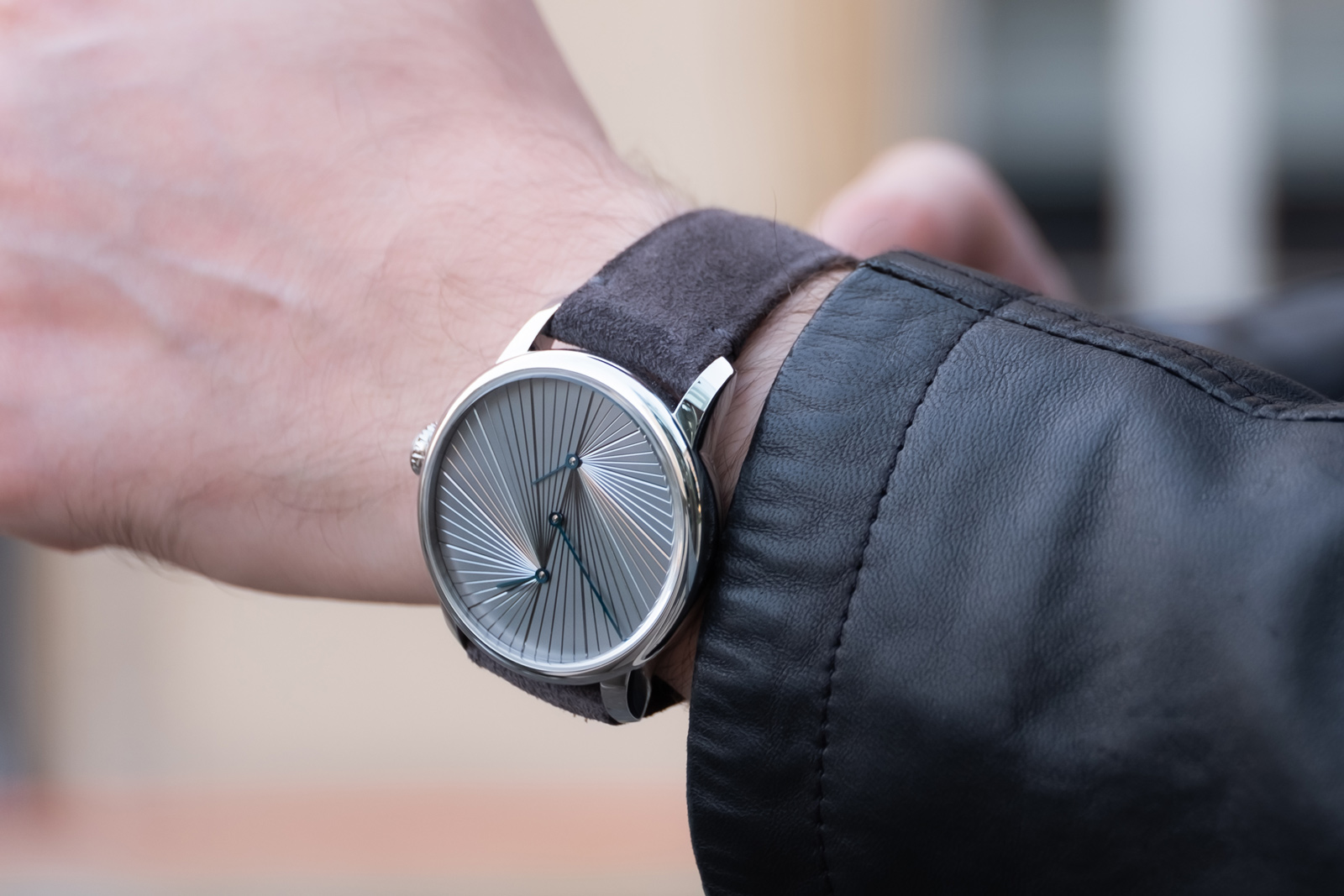 Original, novel design that remains coherent is unusual at this price point. Also, that it’s a regulator dial with separated hours, minutes, and seconds hands, instead of the typical triple-axial format, helps distinguish it from competition. It is good value, given its design and regulator display, as well as the fact that only 178 pieces will be made.

At just under US$3,800, the latest Le Régulateur is priced exactly the same as its immediate predecessor designed by Vianney Halter, which is identical aside from the dial. The Atelier Oï is arguably more compelling, since it’s an original creation by a studio that has never before designed a watch. In contrast, the earlier collaboration editions are essentially simplified, more affordable versions of high-end watches.

Despite the seemingly seamless and borderless design, the dial is actually bisected into left and right halves with a straight line that passes through the three axes of the hands – one of many details that reveals its clever design.

Two sets of lines radiate from the hours and seconds hands at 12 and six o’clock respectively. Intriguingly, the radial lines segment the dial circumference into 60 spaces of equal length, forming a minute track, which is really the only necessary scale to tell the time. Hours can be approximated easily, while the seconds hand merely serves to indicate the movement is running. 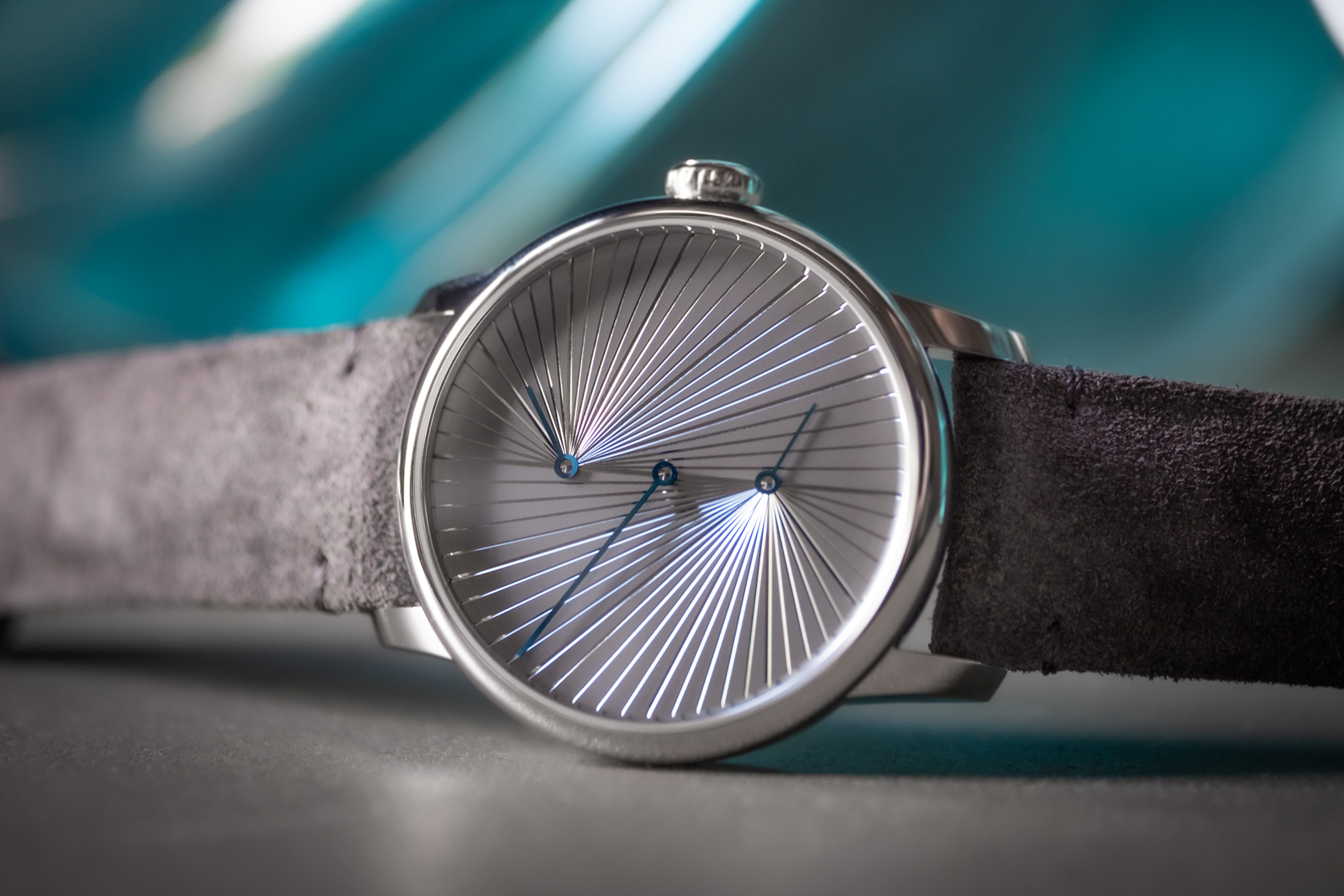 The hand at the centre indicates the minutes, which can be read more precisely with the de facto minute track

Inside is the SW266-1 that’s standard for Louis Erard’s regulator. While based on the ETA 2824, it is modified by Louis Erard with the addition of the brand’s own regulator module that separates the hands into three different positions. 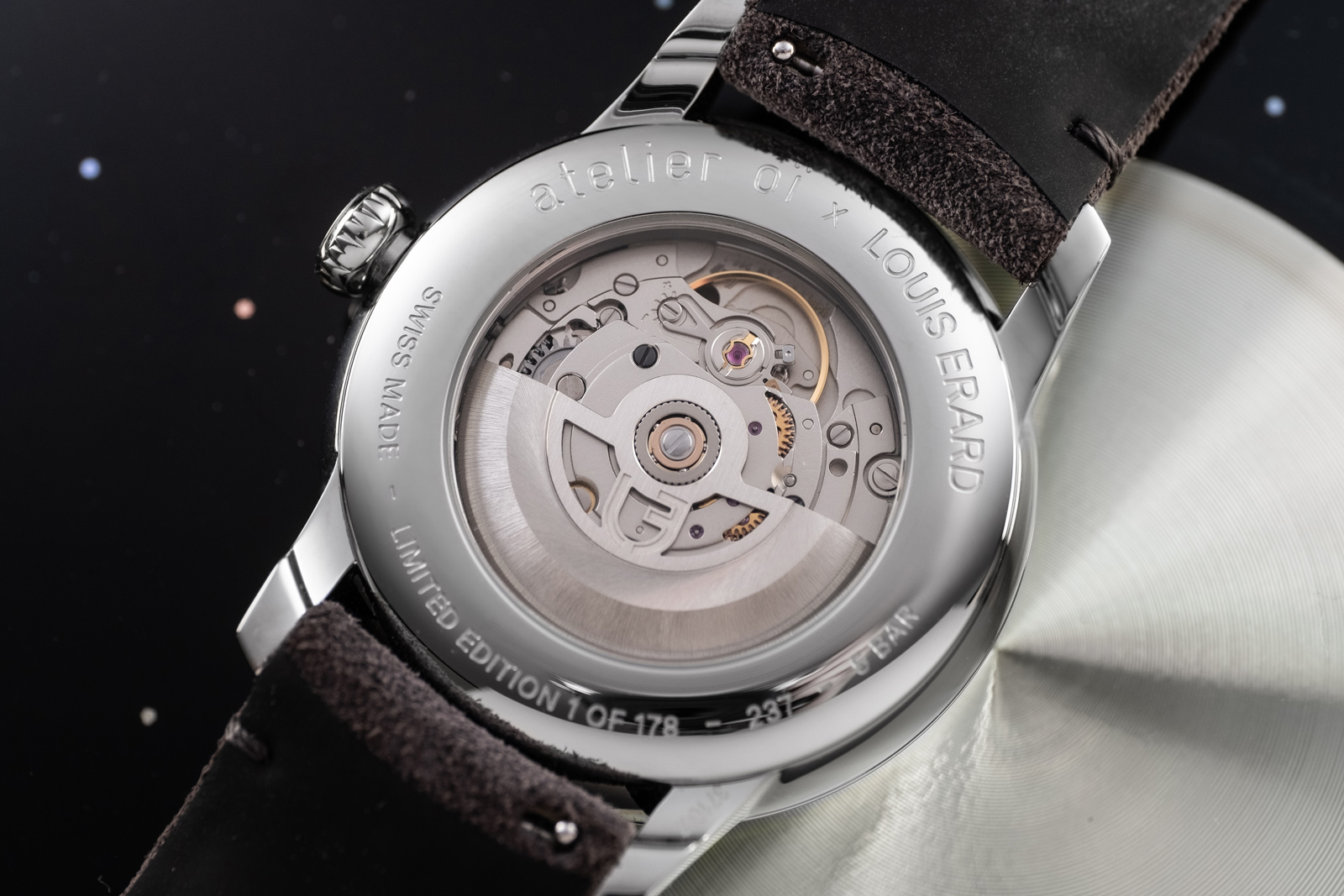